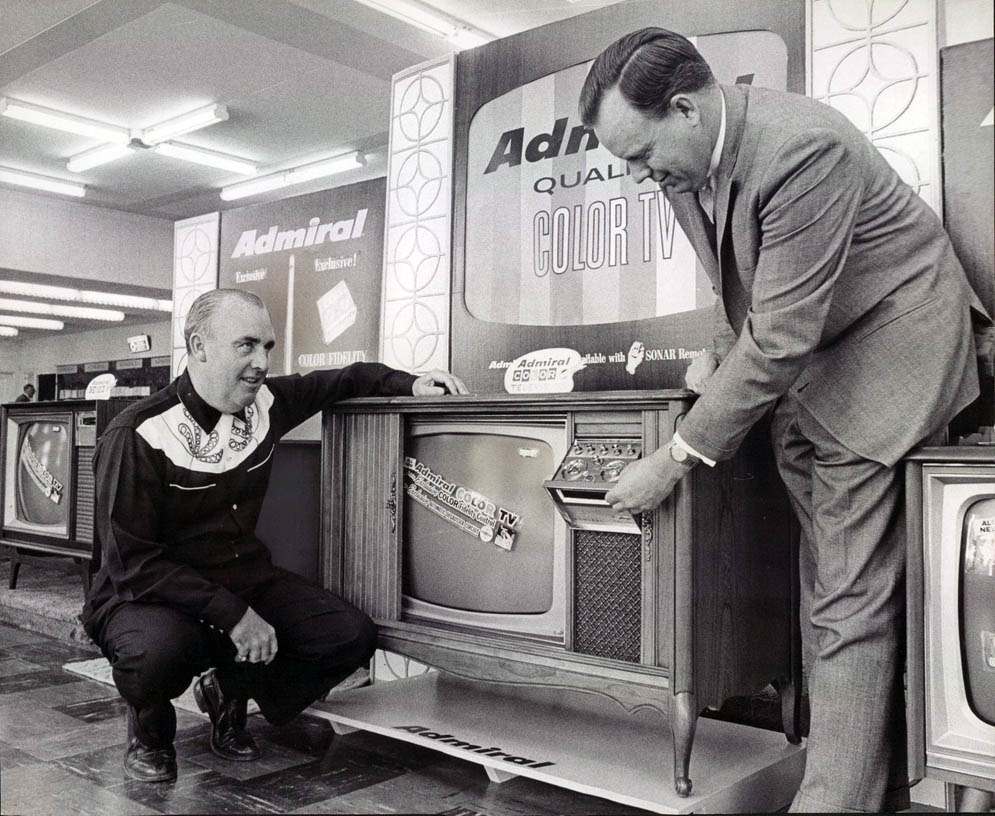 The purchase of TV set used to be akin to buying a car; they were insanely expensive – a mammoth purchase, especially in a time before credit cards.  But, you expected them to last through the decade, and indeed some of these old hosses are still ticking.  We discussed this before in our look at the Amazing 1971 Zenith Color TV; but today we’re taking a broader look at TV technologies past, scouring through some old photographs and adverts. 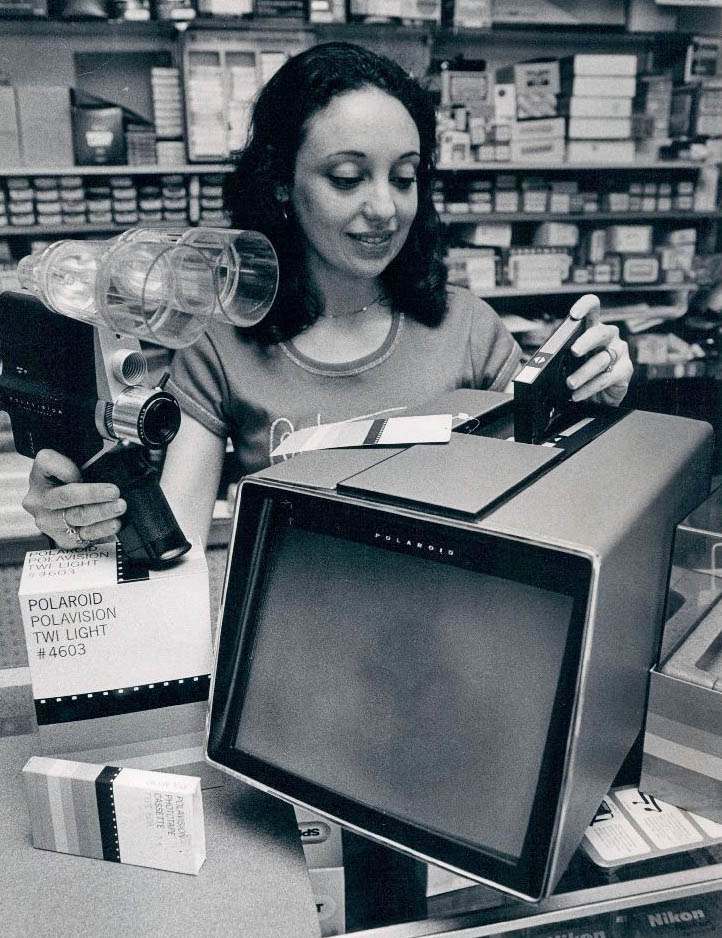 The Polavision Instant Movie System was unveiled in 1977 to abysmal sales, and discontinued by ’79.   The problems were manyfold.  First, the quality of the recording was awful – many complained the movies were just too damn dark too hardly see.  Plus, you had to view the film on this “TV”  – keep in mind, VHS and Beta had just arrived; so, people would want to watch the tapes on their new home video system, but couldn’t.  The timing was just a little too late, it was too expensive, and, frankly, too awkward for something that proclaimed to be “portable”.  Here’s the TV commercial:

There was a brief gap between the Polaroid crap Instant Movie System and actual cameras which could record onto videocassette.  The first of its kind were clunky and heavy. 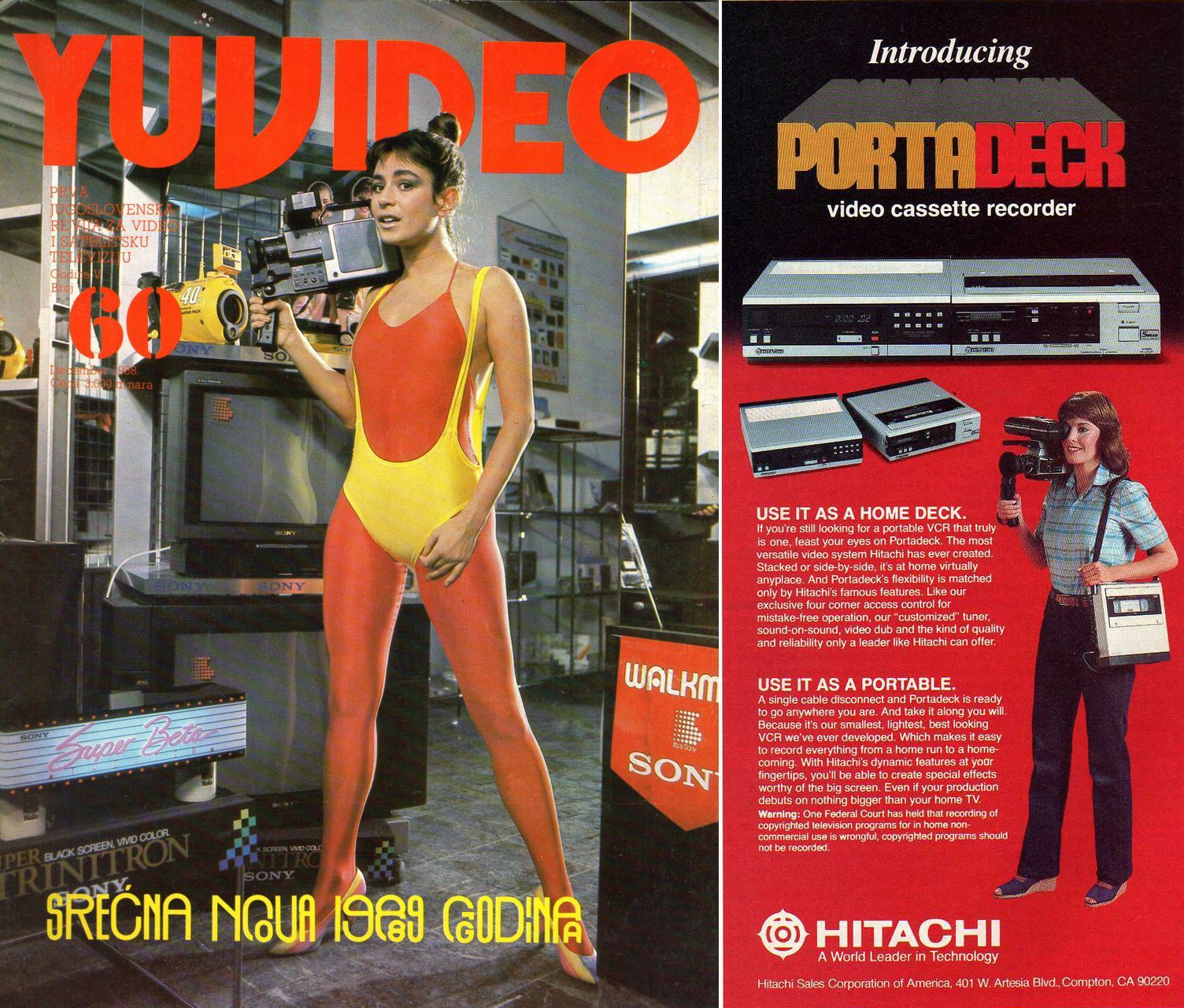 These clunkers got a tad smaller with the advent of the small cassette, but the size problem wasn’t solved until things went digital.  I still have moments where I’m just amazed that we can record video on a phone…. not to mention the fact that we can send this video to a TV or other mobile device wirelessly with just a few clicks.  It’s hard to believe we were lugging around these 30 pound behemoths just over a decade ago – and the picture quality was worse.

VIDEO TAPES WILL CHANGE THE WORLD

The next advert asks, “EVR is here.  How will you use it?”  Indeed, it was the early 1980s, video recorders had arrived – how would mankind harness this new force in the universe? With great power comes great responsibility. 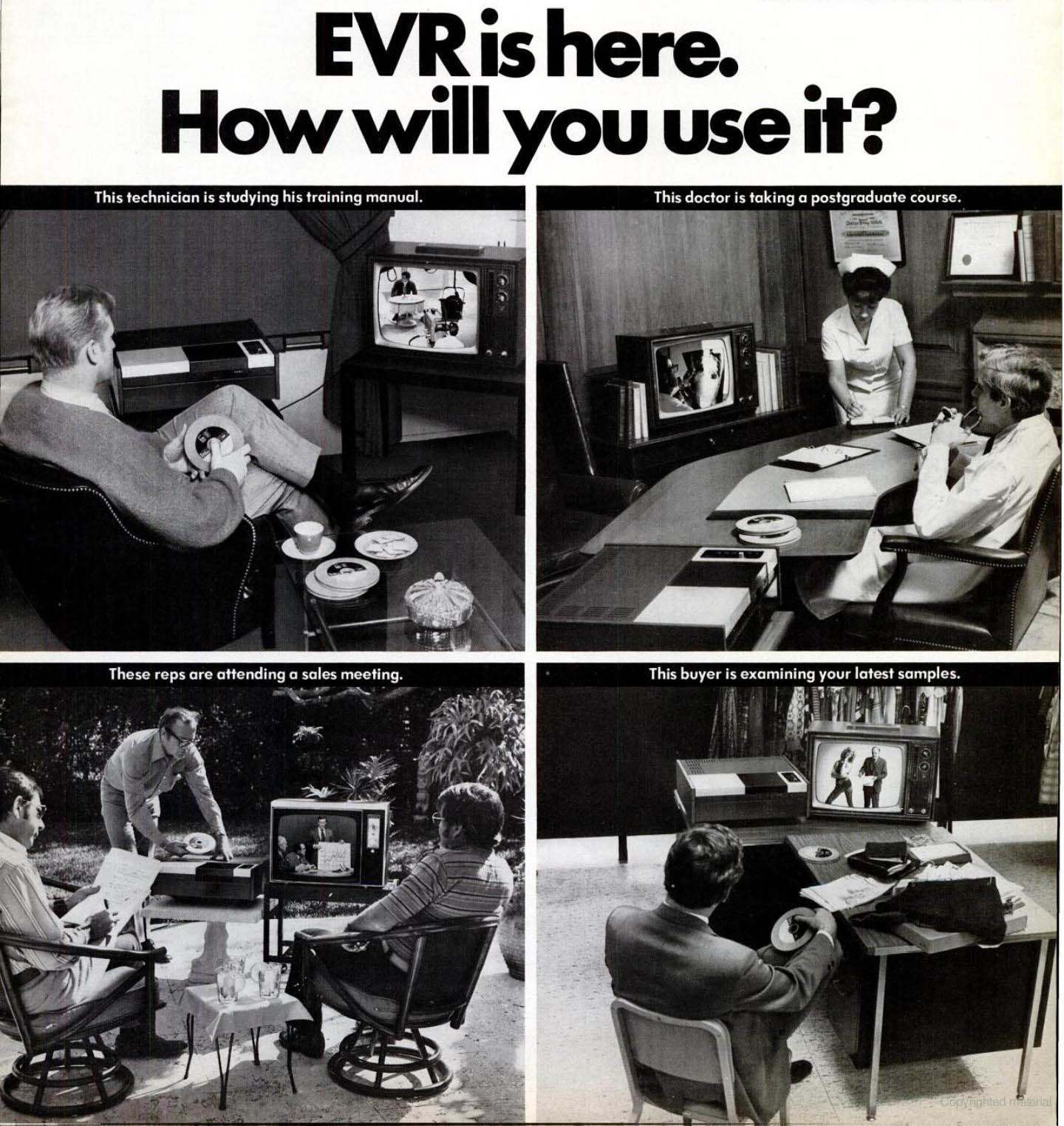 The text accompanying the advertisement above: “The inherent fascination of television.  Harnessed, finally, to train, inform, communicate and educate for you, by a cassette TV system anyone can operate…. EVR displays audiovisual materials more conveniently and less expensively than either videotape or 16mm movie playback devices.  And it is used in normal room light.  Without screens, projection rooms or trained projectionists.  So it gets used.”

30+ years later we can sort of smirk at this advert; however, it seems like they were shooting for the same things we’re going for today – the elimination of the need for travel and face-to-face meetings, done with ease (without the need for “trained projectionists”.) 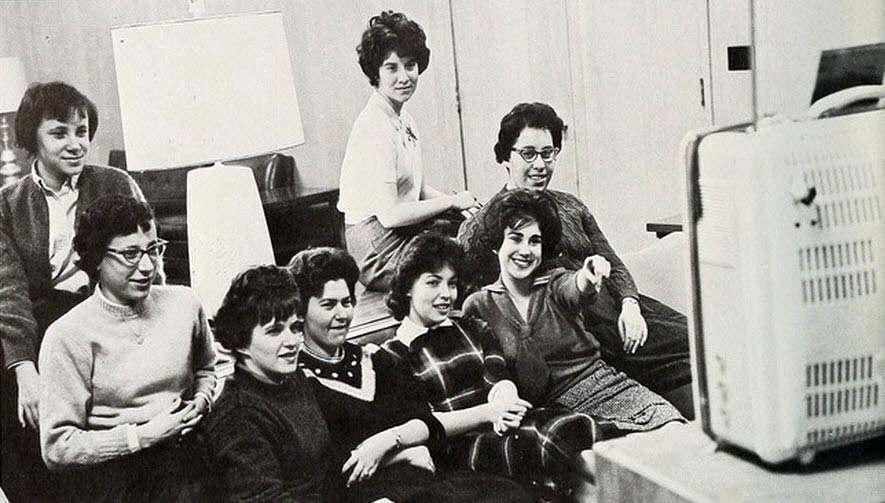 Picture this – it’s a college dorm, and there’s one television for the entire building…. and it gets about 2 channels, has terrible sound, and has three colors – grey, white and a sort-of muddy green.   Yet, no one seemed deprived. 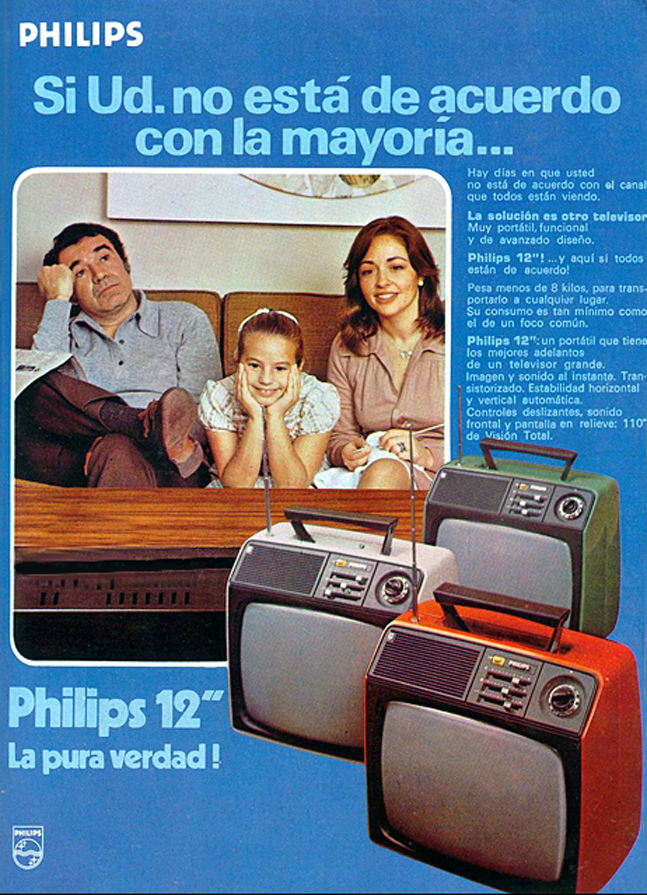 The message of this advert is that, if you detest the miserable garbage your kid watches, the solution is to just buy another TV.  Two televisions in one home – what a novel concept!  Of course, that second tele would be shitty and small, but it was a step toward the modern day acceptance of multiple televisions throughout the house. 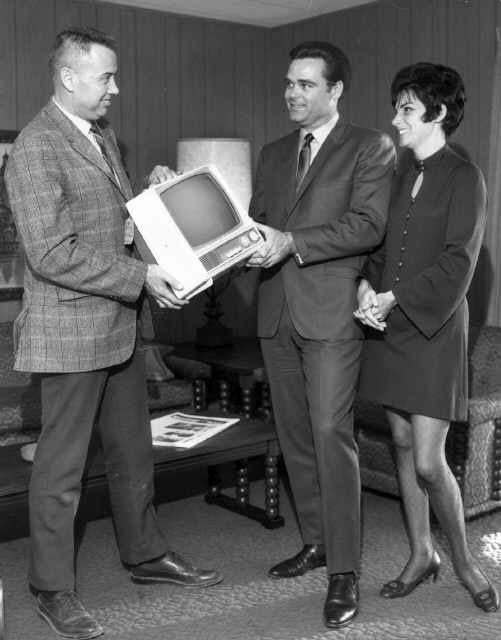 Okay, it’s not exactly a smartphone you can put in your pocket, but its easy to overlook the innovation of making TVs more compact that came about in the late 1960s.  When you consider the massive tubes and hardware that filled these old clunkers, it really was amazing that they were able to make them portable without the need of a forklift. 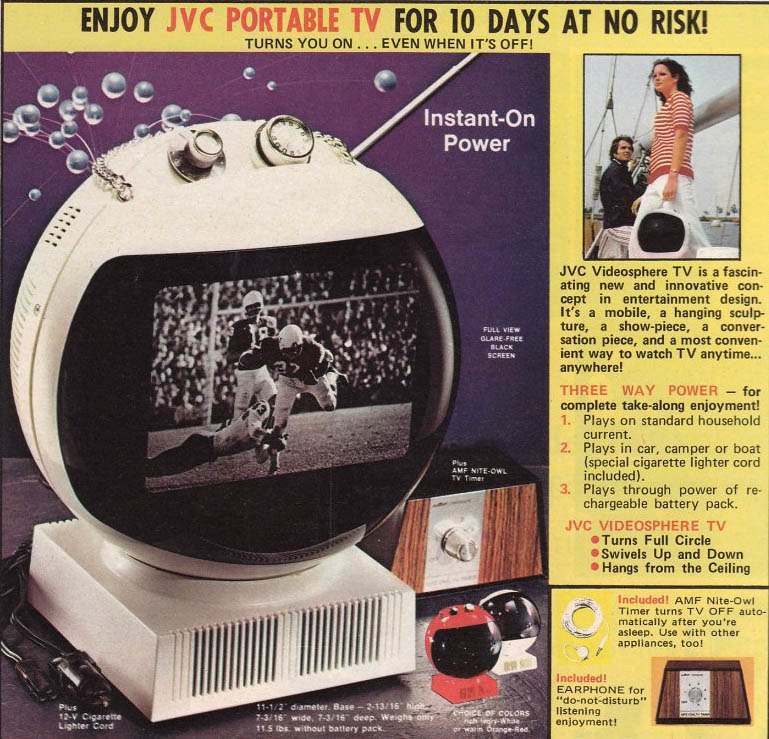 Take note of the “Instant-On Power”?  TV’s used to take a minute to warm up, but “Instant-on” televisions didn’t need a lengthy warm-up because there was always power to the television, stored in a capacitor bank. 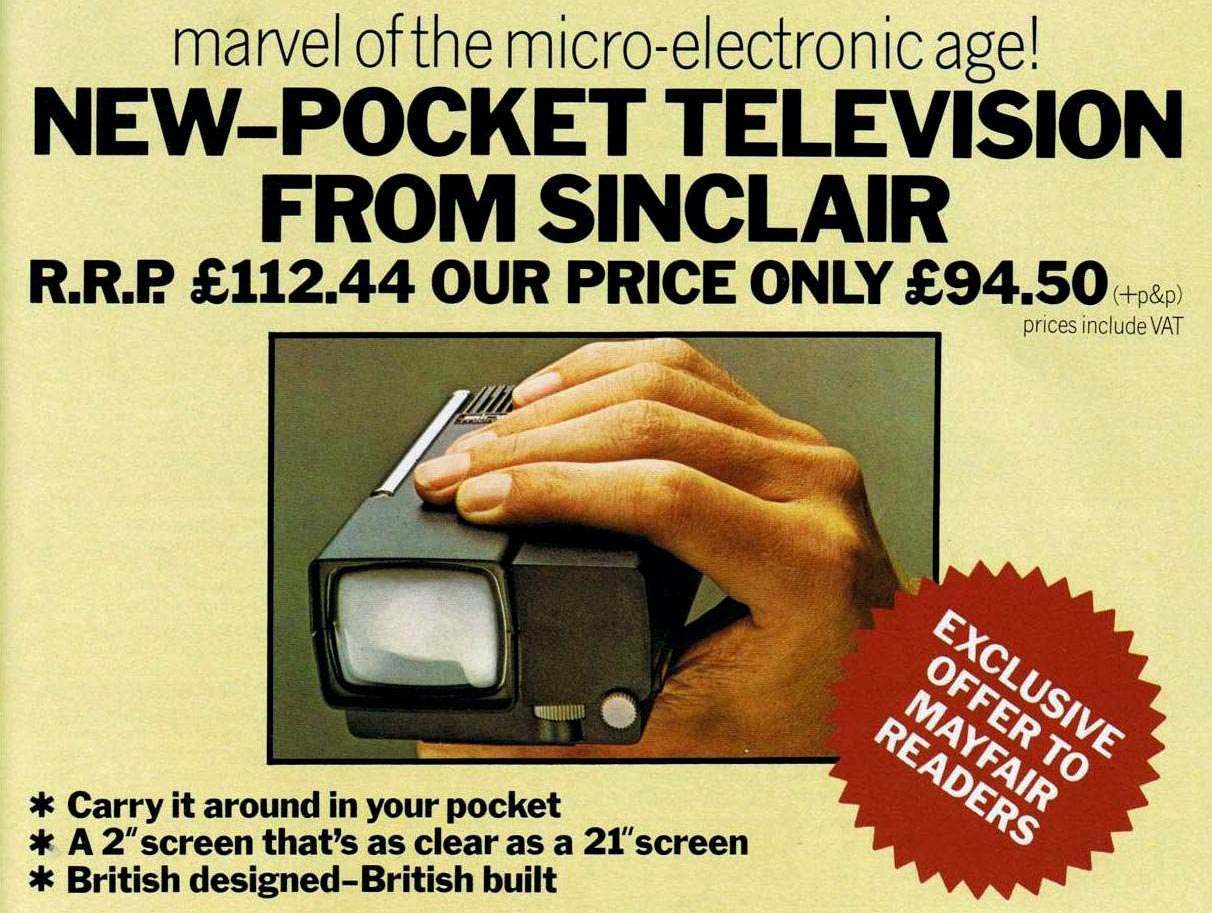 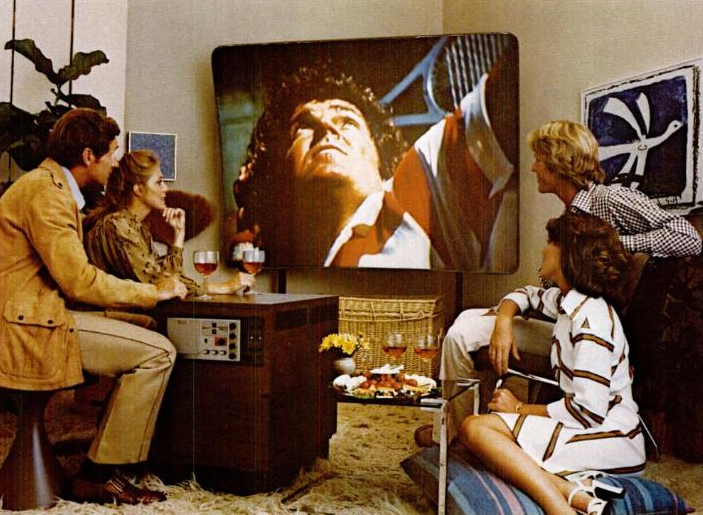 Today you can get a big-ass flatscreen for a quarter of the price these people paid for their shit resolution projection TV.  But technology always looks pathetic in the rear view mirror.  These adults, drinking wine and laying on shag carpet are oblivious to the upcoming LED HDTV with built-in Wi-Fi and Smart Hub with Netflix, Pandora and a Clear Motion Rate of 240 with 1080p.  They seem just fine without it. 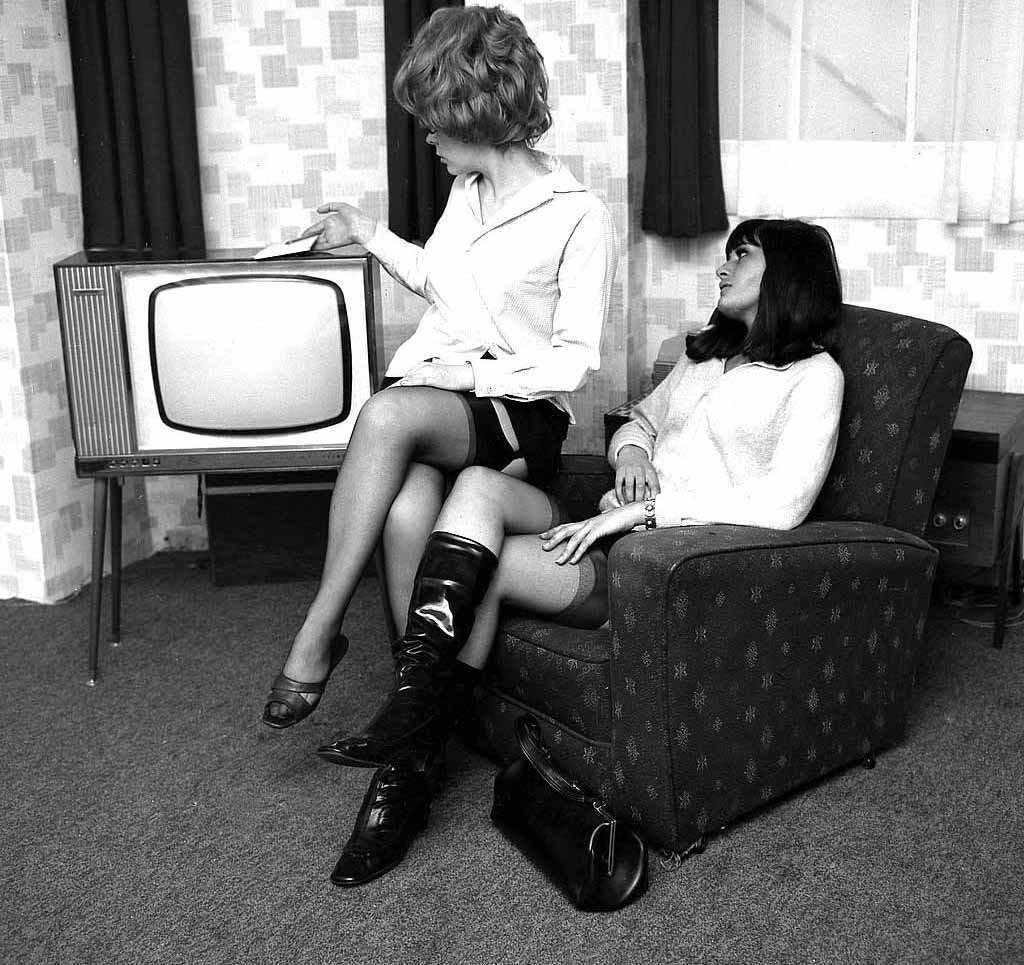 You know the First World Problem – 255 Channels and there’s nothing on.  Imagine a world where there is only 3 channels (4 for the most fortunate) – that was life for a couple decades.

But the dream was always there to have a vast catalog of material just a click away…. 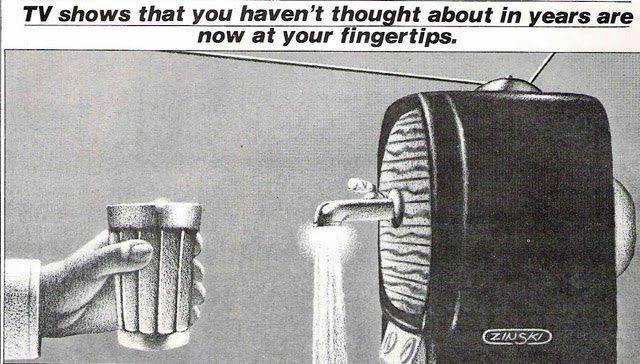 The December 1980 issue of Video Action magazine had this prediction of the glories of endless interactive cable channels:

Two-way cable television can offer us untold opportunities. Entertainment programming will change greatly. To be sure, everything we have come to expect from television will still be there: programs like M*A*S*H* and Charlie’s Angels are too popular to be anything less than a major factor in the market. But network television adequately supplies us with this, and network television will find itself competing with a lot of other types of material, each chipping a tiny segment away from its previous audience.

In other words, network television will continue to supply the masses with vacuous drivel (i.e. reality television) while the new channels meet a wider range of needs. Is it a spot on prediction or wildly inaccurate?  It seems, at times, that the extra channels just supply more vacuous drivel. 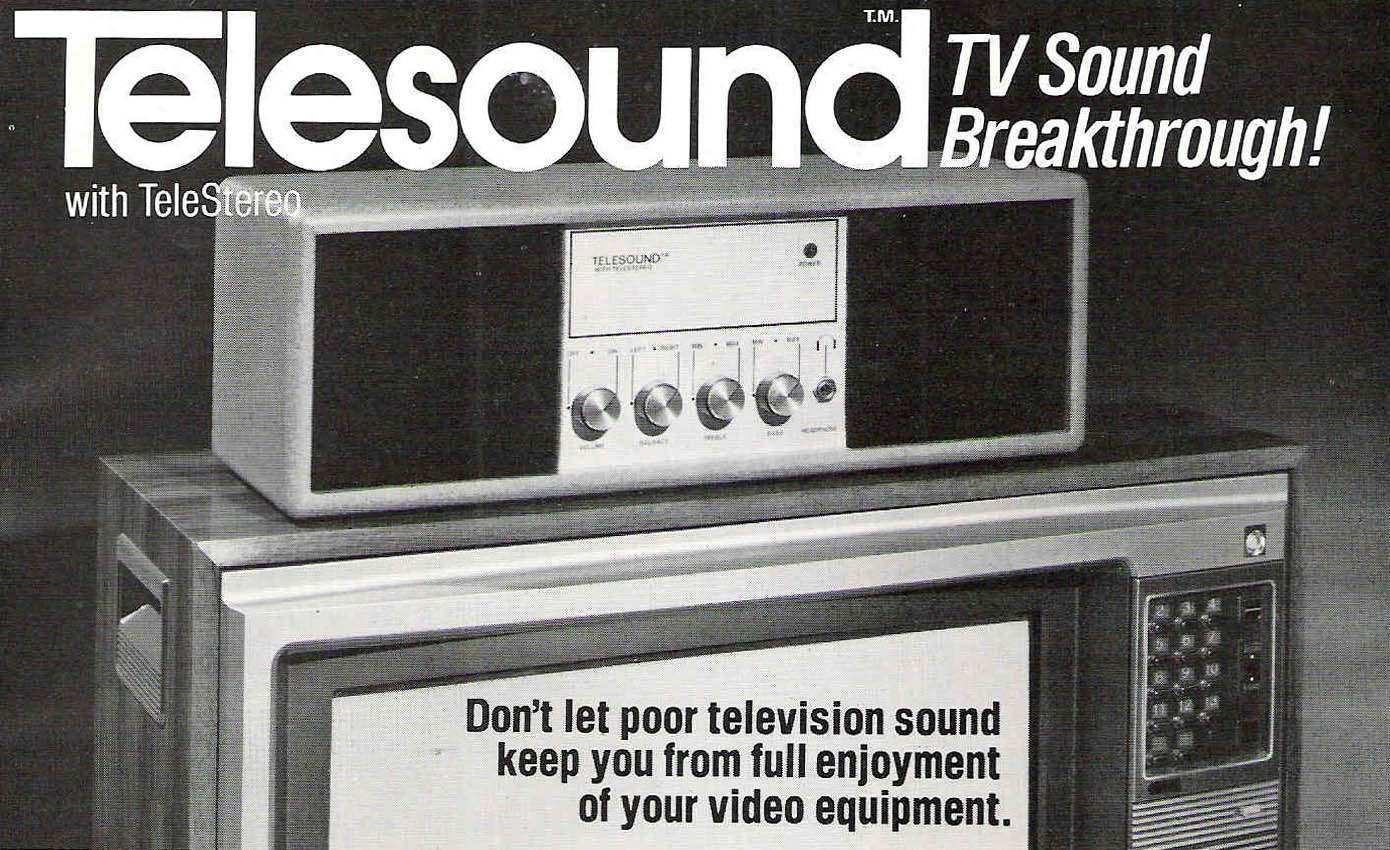 “With TeleSound, any TV, videotape recorder or videodisc player can sound as good as an expensive stereo system. TeleSound is a totally self-contained stereo amplifier and speaker system. ”

Compared to today’s home theater systems, this is pretty hilarious… as I’m sure our current systems will appear 30+ years from now.  It also claims it is “compact and contemporarily designed” which should incite further condescending giggles.

WHEN TV REPAIRMEN ROAMED THE EARTH 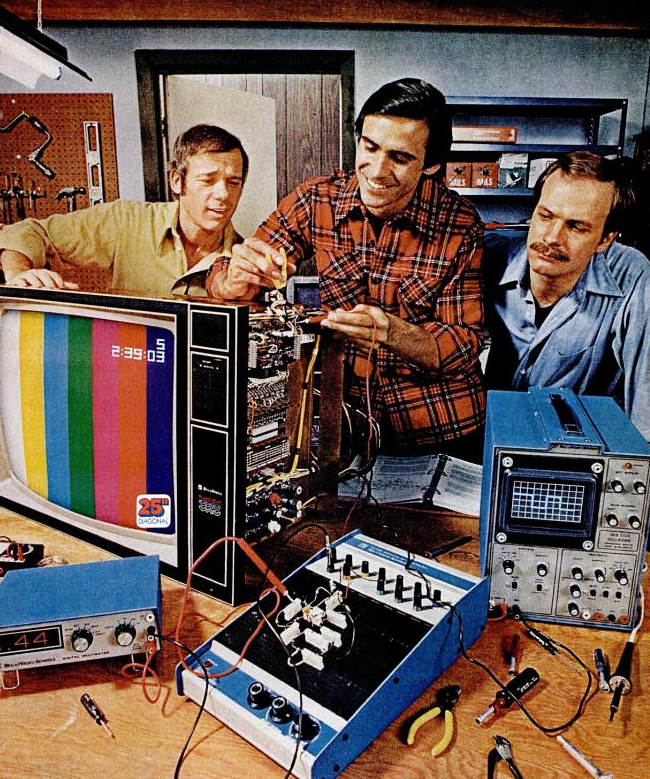 Yes, I know there still exist TV repairmen, but they are a dying breed.  Our throw-away society has reached a point where, when a TV goes on the fritz, it’s time to just chunk it and buy a new one.    One of my favorite quotes is from Parks and Recreation where Tom says, “One time my refrigerator stopped working and I had no idea what to do! I just moved!”

“Do you need trouble? Of course not.  No lover does.”  Yes, this playboy has better things to worry about than TV malfunctions – he’s got lovemaking to do.

TV SETS OF THE RICH & FAMOUS 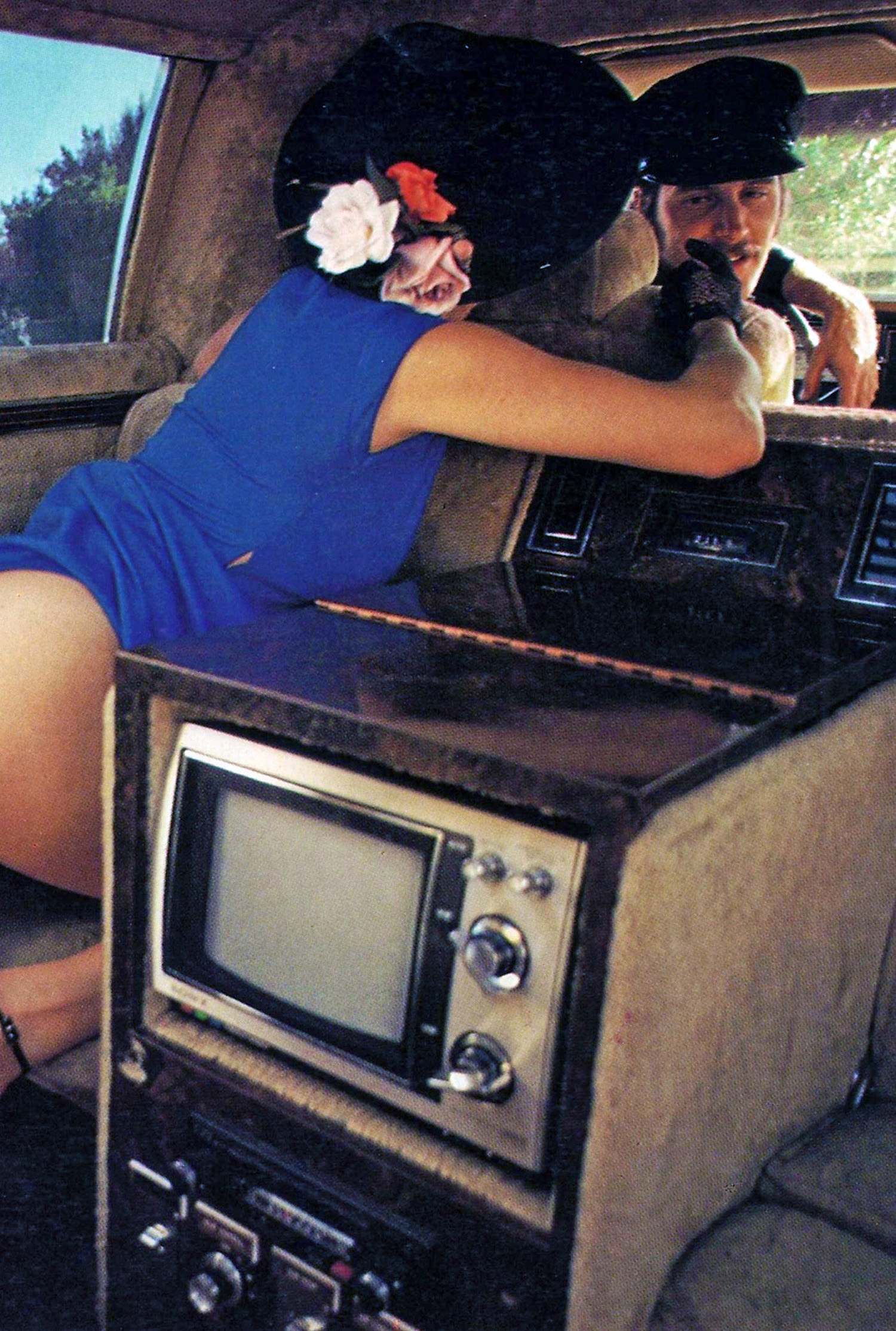 By the end of the 1970s, the greatest luxury of all time arrived – the TV in your car!  As with most new technologies, it started out as something only the mega-rich could afford.  A couple decades had to pass before it made its way out of the limousines and into the minivans.

Another invention for the well-to-do.  I’m not sure what’s with the “aqua” – it sounds like a pool supply company.  Anyway, I remember these color projectors – terrible picture quality beyond your wildest imagination (instead of HD, think VNDW – virtually no definition whatsoever).  Of course, the novelty was all that mattered, and we were all excessively impressed.

I think the only people that could afford one of these setups were guys like Hugh Hefner…. 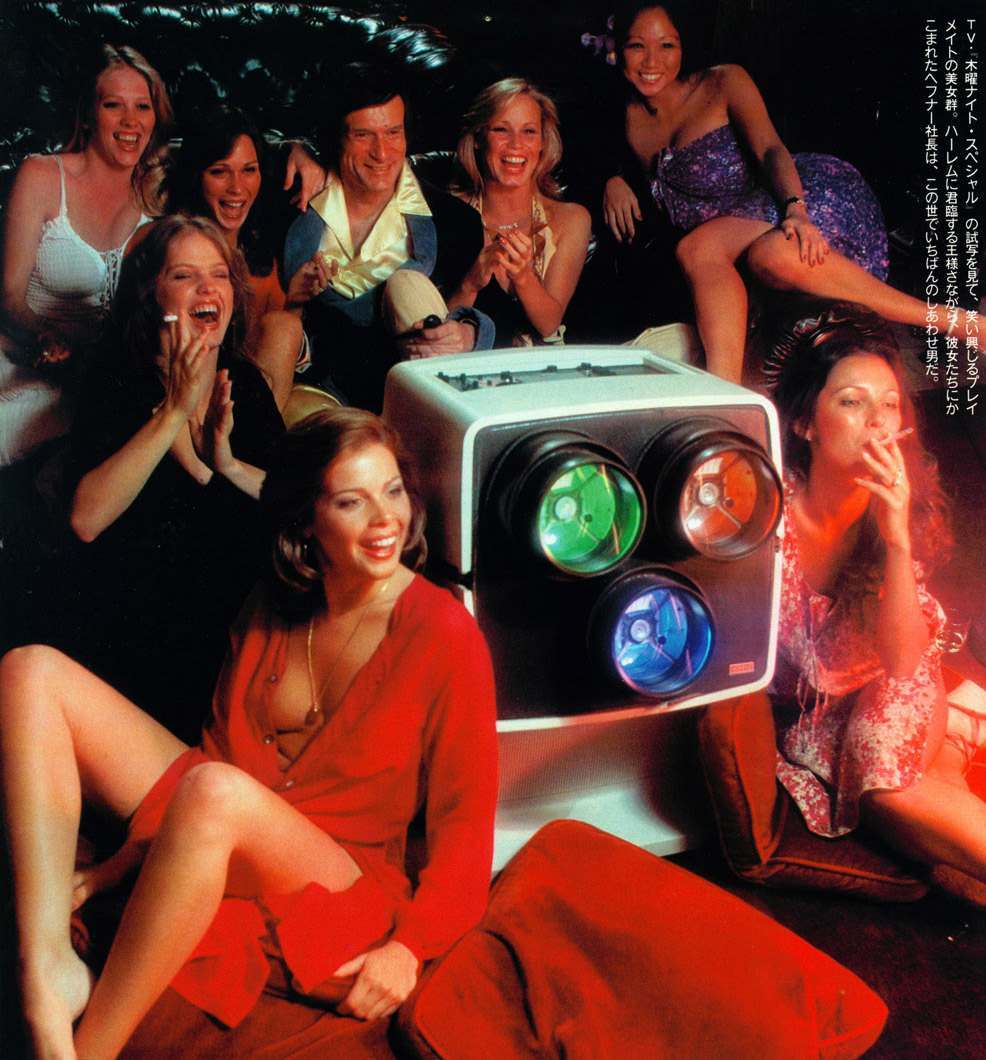 Some guys have all the luck.  Moving right along… 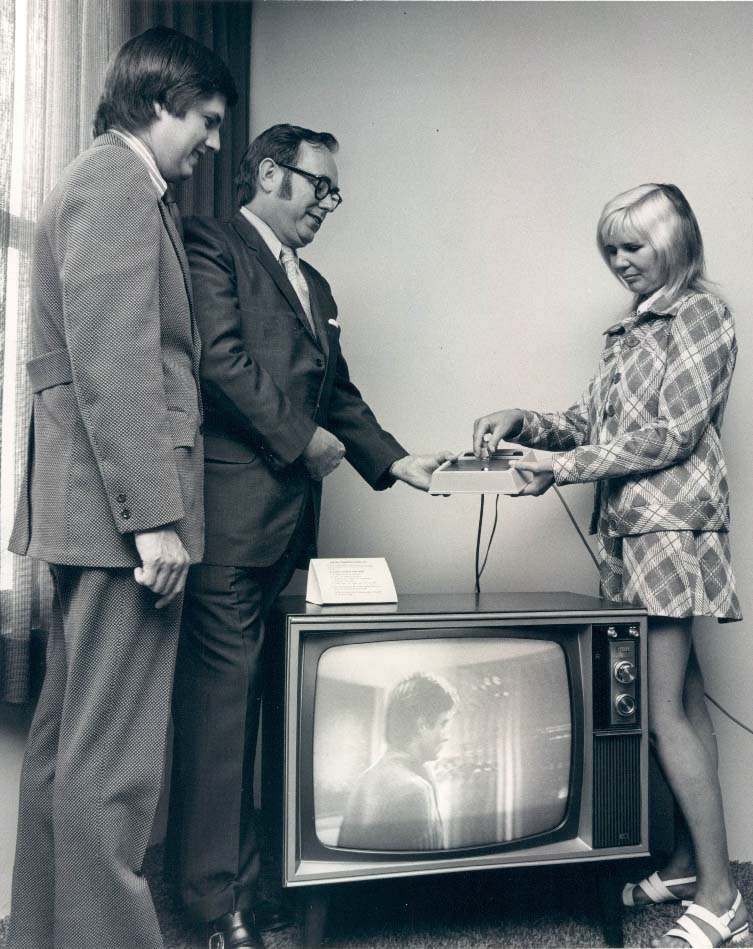 From a previous article: 6 Common Sounds of Yesteryear We No Longer Hear

I’m not exactly sure what contraption is being demonstrated above, but any innovation that limited the amount of time humans had to get off their ass and adjust the set was a good innovation.

THE LOW POINT IN TV INNOVATION 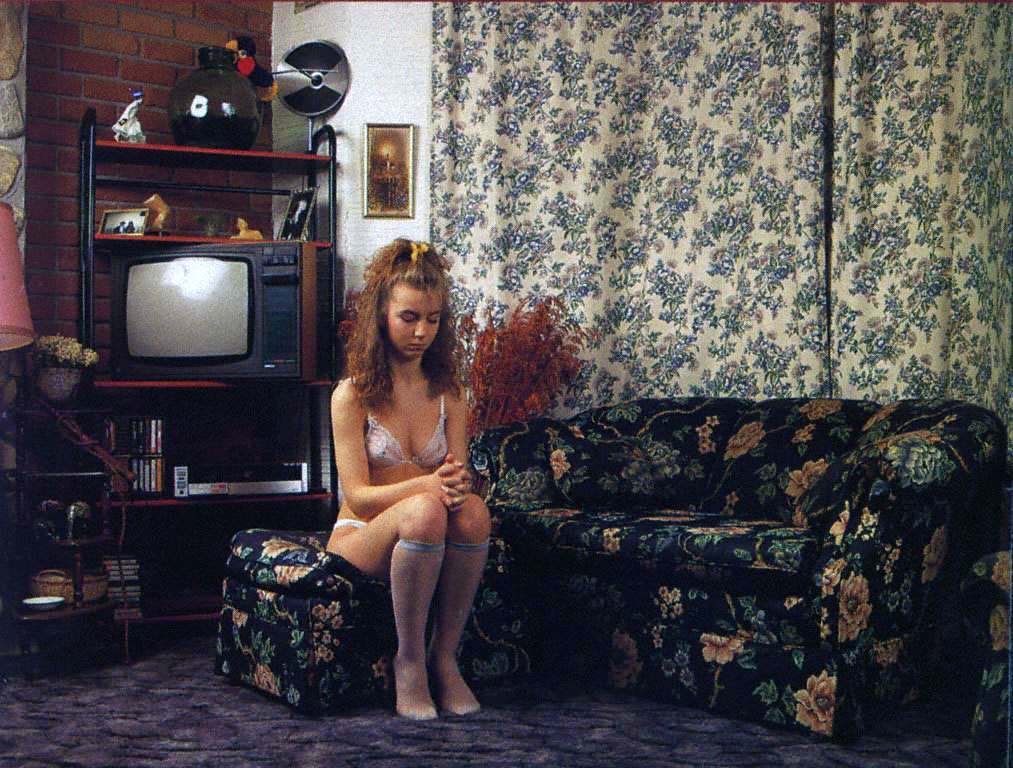 When TVs came into the home in the 1950s, there was an excitement to it.  Then, color arrived and the populace was even more electrified,… then VCRs in the early 1980s, and the people were flying high…. and then (insert sound of record scratching to a halt) nada.

It seemed like TVs maybe got a little cheaper, and slightly bigger from the mid-80s to mid-90s; but things remained largely a innovation-less until DVDs.  Then, things began to take off again with Netflix, Blu-Ray, and, of course, the mighty HD bigass flatscreen…. and who knows what lies right around the corner – what wonders await.  Currently, the hope among consumers is that we’ll get something like virtual reality – an immersive experience as if the show is taking place right in our living room. 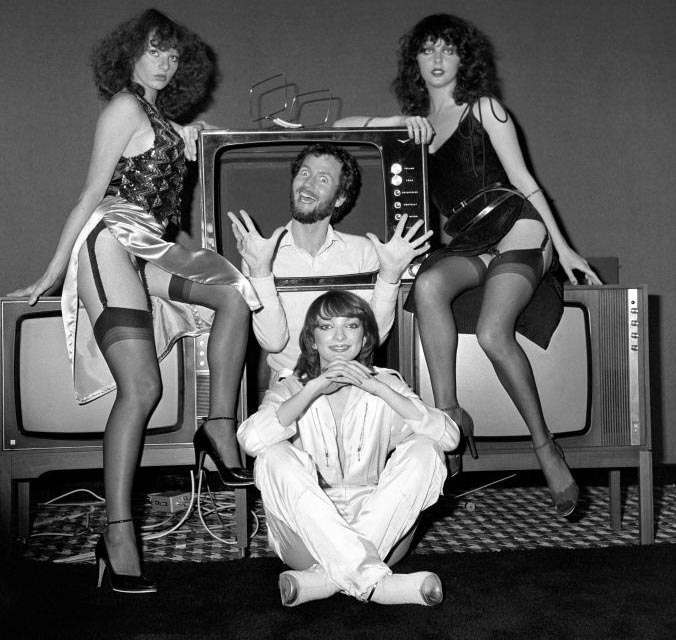