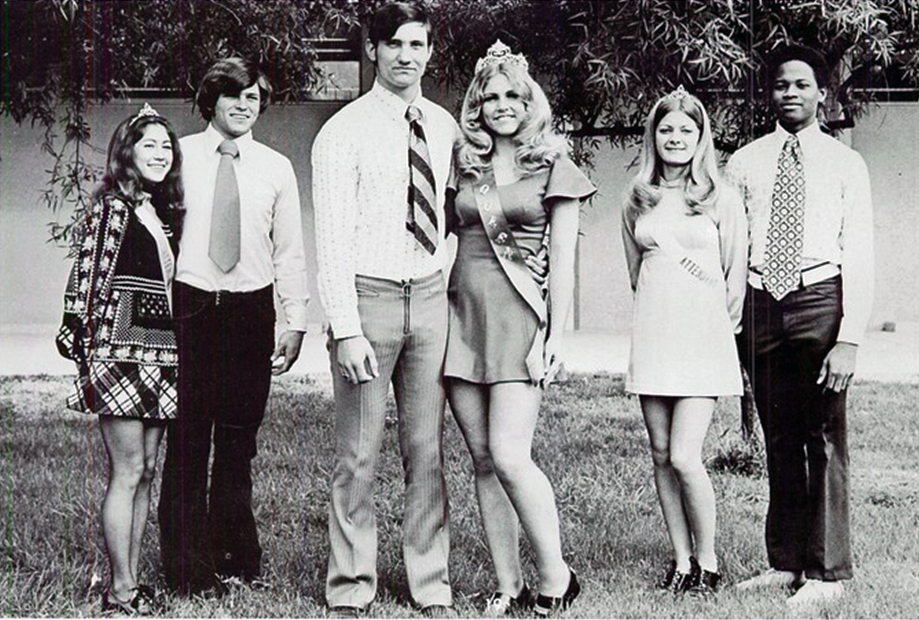 In the late Sixties to early Seventies, the mini skirt was a highly popular fashion – but for the in-crowd it was compulsory attire.  No self-respecting Homecoming or Prom Queen would dare to be seen without one – and the shorter the better.  Here’s a look at the popular girls of 45+  years ago in their uniform of choice – the mini skirt. 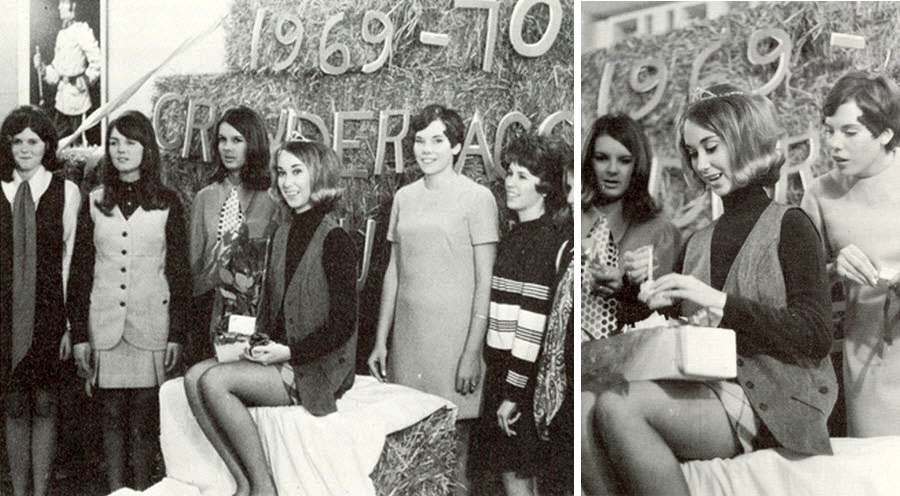 Photographic proof that the girl with the shortest skirt always wins.  The poor girl on the right can only look on with envy written across her face. 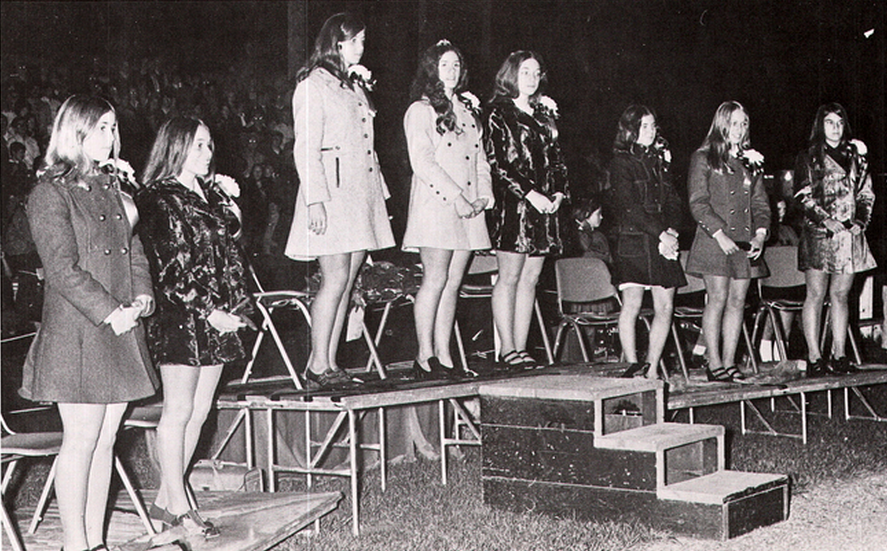 Once upon a time, it didn’t matter the temperature – mini skirts were both winter and summer fashions.  Certainly, if you wanted to earn your place atop the popularity ladder, a little frostbite was a small price to pay. 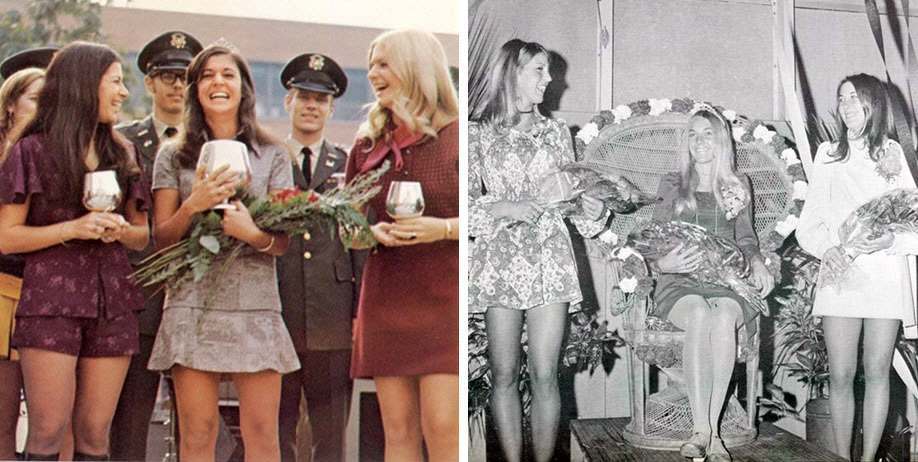 The smiles and laughter of the girls on the left and right of the winner betray their thoughts.  At left: “It should be me with the biggest goblet!” and at right:  “It should be me on that wicker throne!”

The key is to look as unenthused as humanly possible.  You may be brimming with vainglory; nevertheless, it’s imperative to sit there in your miniskirt appearing bored by the fanfair.  It also helps if you’re riding on a giant paper mache skunk. 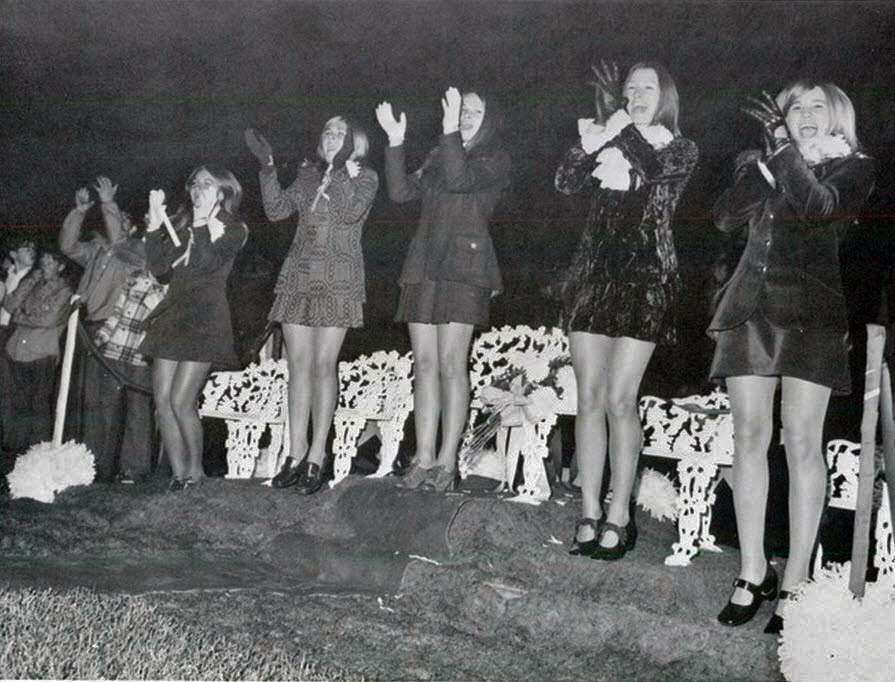 As much as I’d love to join in the celebration, Brian DePalma and Carrie have ruined these kinds of photos forever for me. There is no way to UnCarrie these images. 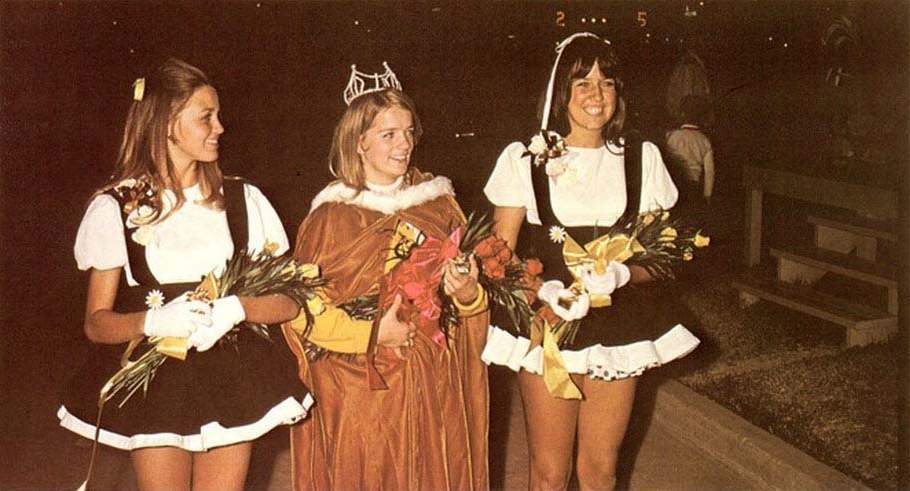 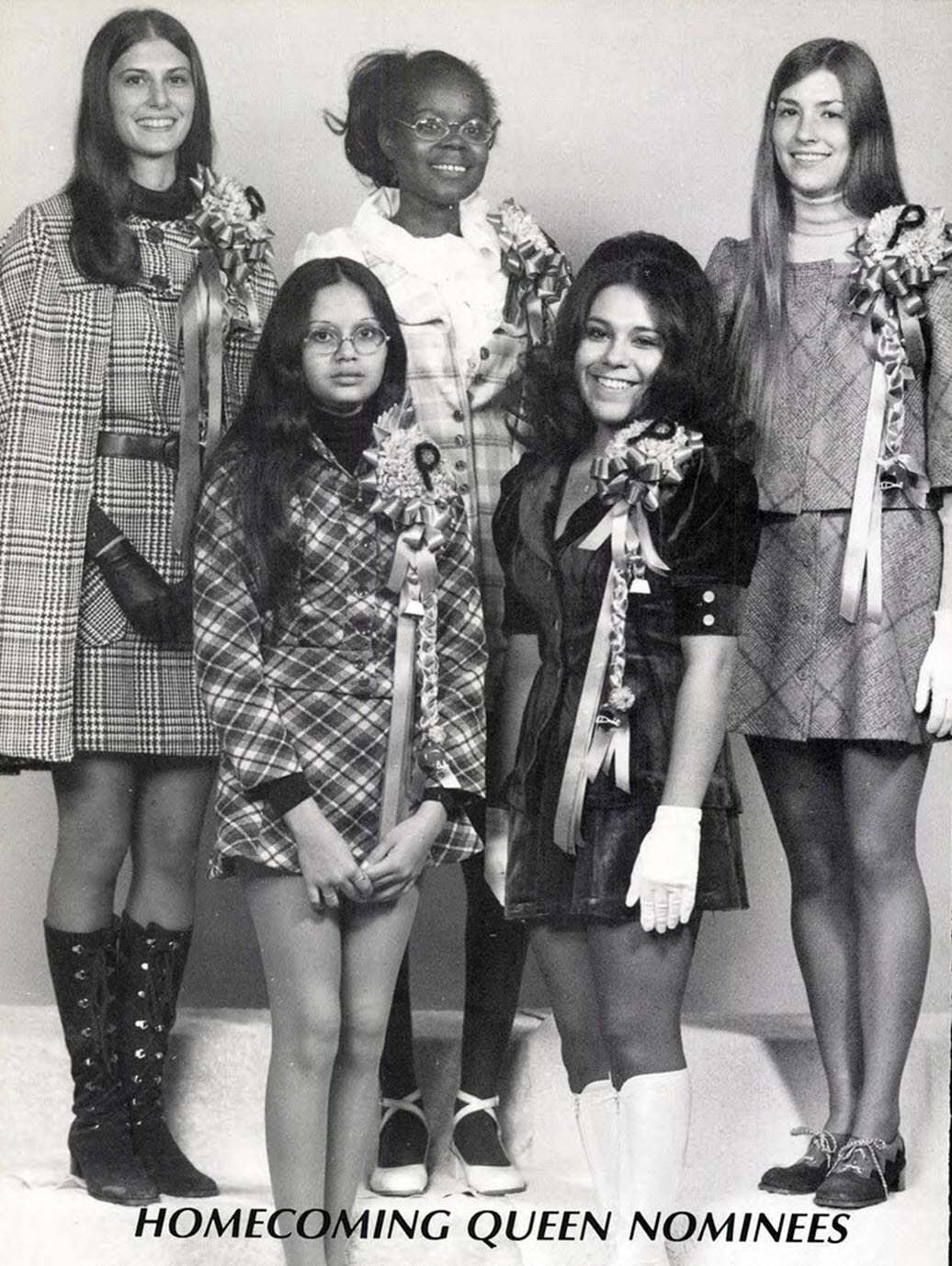 Of the five Homecoming Queen nominees, who will be declared winner is all a matter of color – it’s simply an issue of black versus white.

……I’m talking about go-go boots.  What did you think I meant? 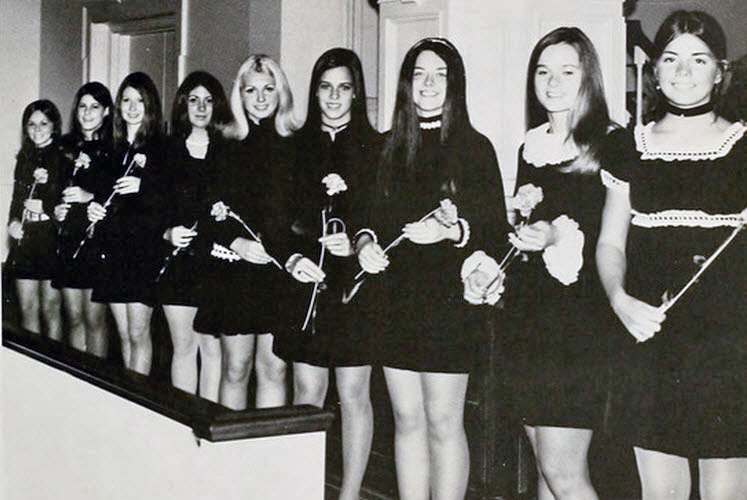 They haven’t announced the winner yet, but my money is on the Swedish exchange student.  Care to make a wager? 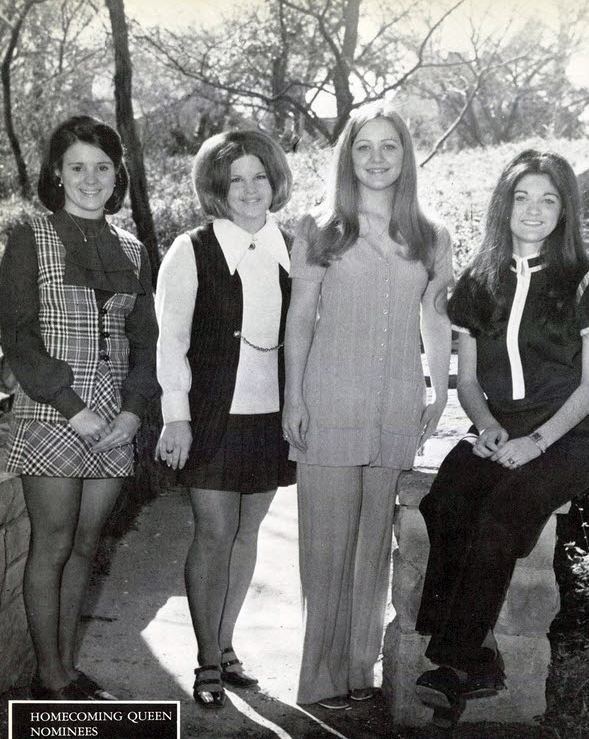 Looks like two nominees didn’t get the memo.  This is 1971, ladies –  pants are a Level 5 Uniform Infraction.  Disqualified! 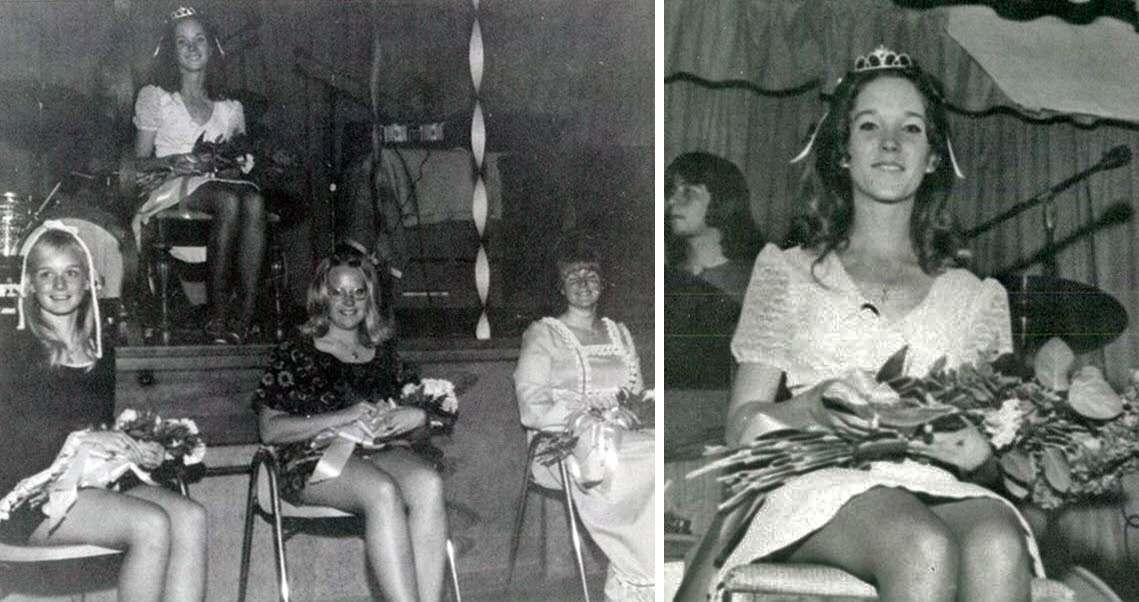 The Prom Queen at the top was gracious in her acceptance speech; however, her inner thoughts went something like this: “These girls that sit before me are like leftovers for back alley mongrels.  I alone sit upon the high seat, to which all others must kneel.” 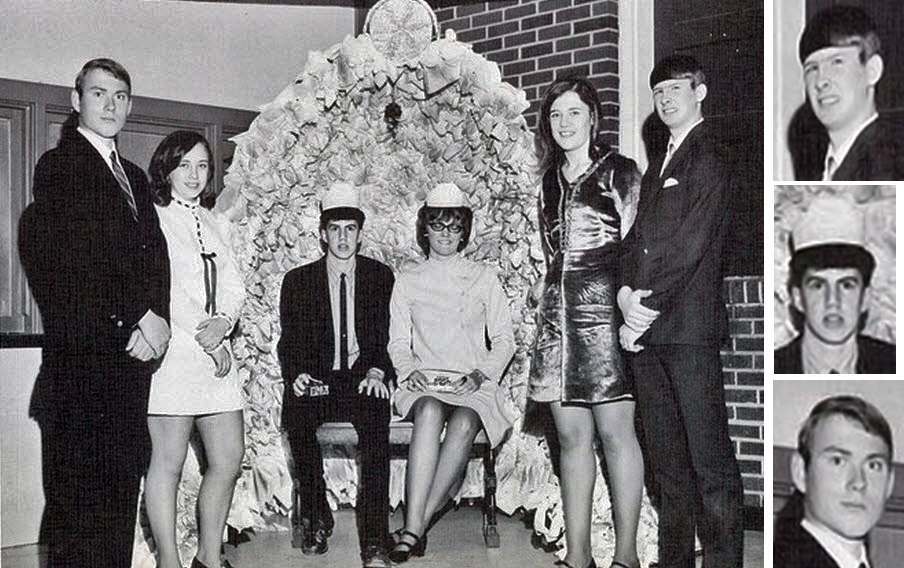 This is what happens when miniskirts lose.  The flanking ladies maintain their composure; meanwhile, the boys can’t hide their abject horror and confusion.  Please don’t let something like this happen at your school. 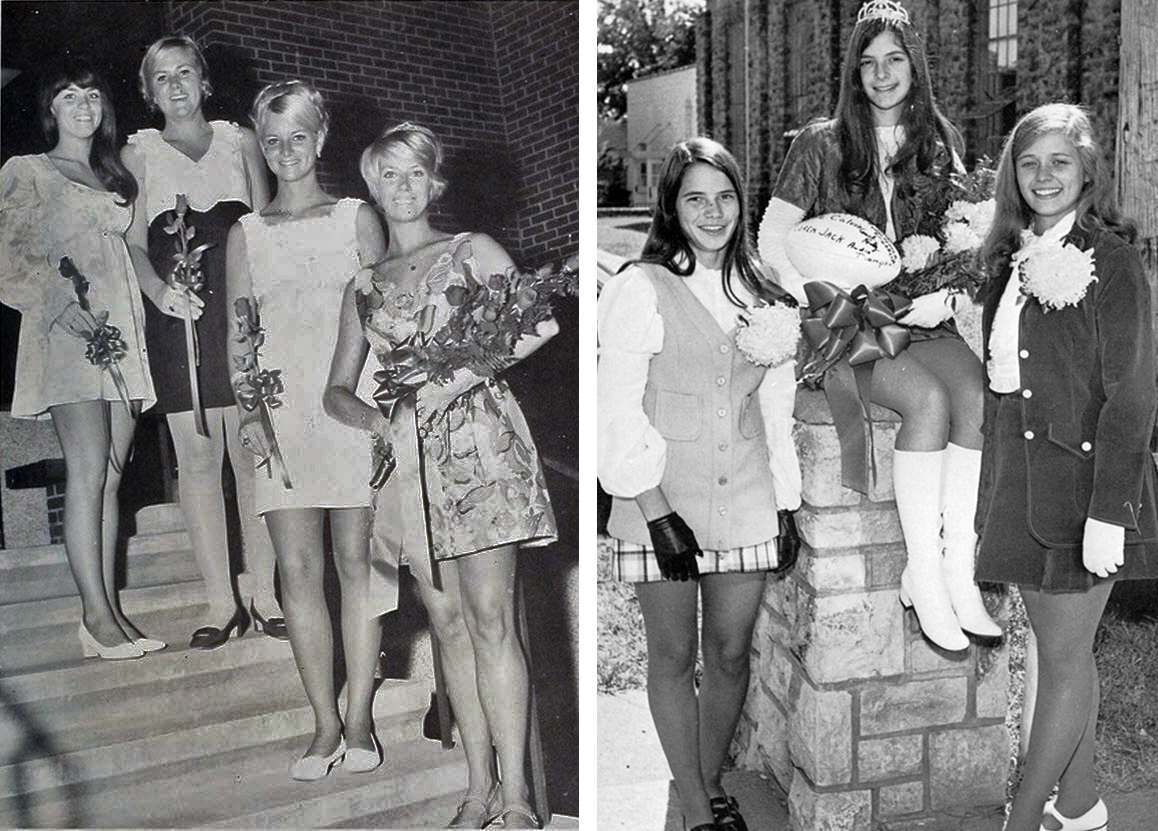 At left: The flowers get smaller and more wilted the higher up the steps you go.  You can’t see her in this photograph, but there’s a girl at the very top holding nothing but a broken stick. 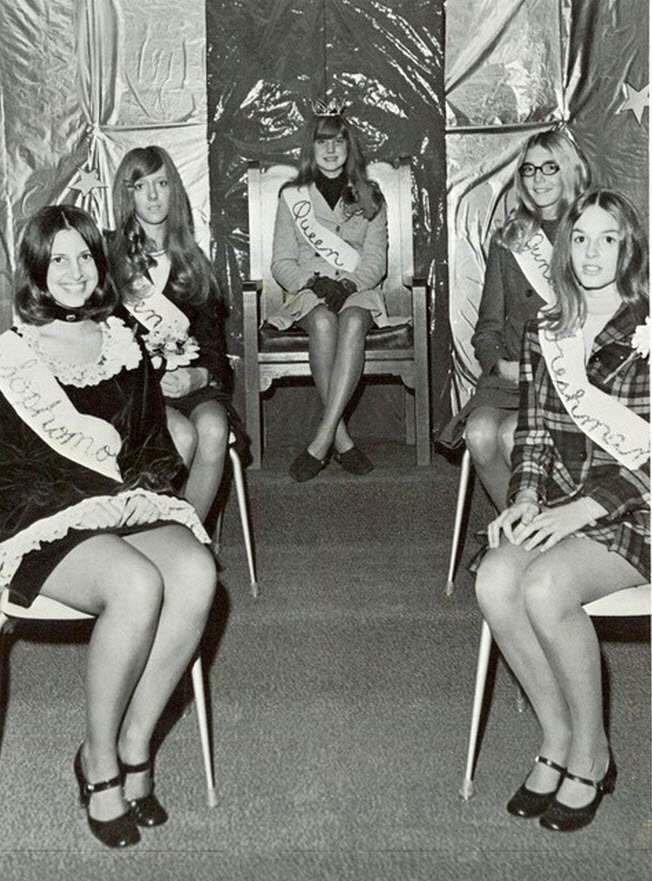 The Freshman (front, right) looks as she should, like a deer in headlights.  Meanwhile, the Sophomore (front, left) and Junior (back, right) are full of hope and promise that they too could one day sit upon The Throne of Absolute Popularity.  And then there’s the Senior (back, left) whose expression says it all: her dreams have been forever dashed by that perky little bitch who won.  Damn her to hell! 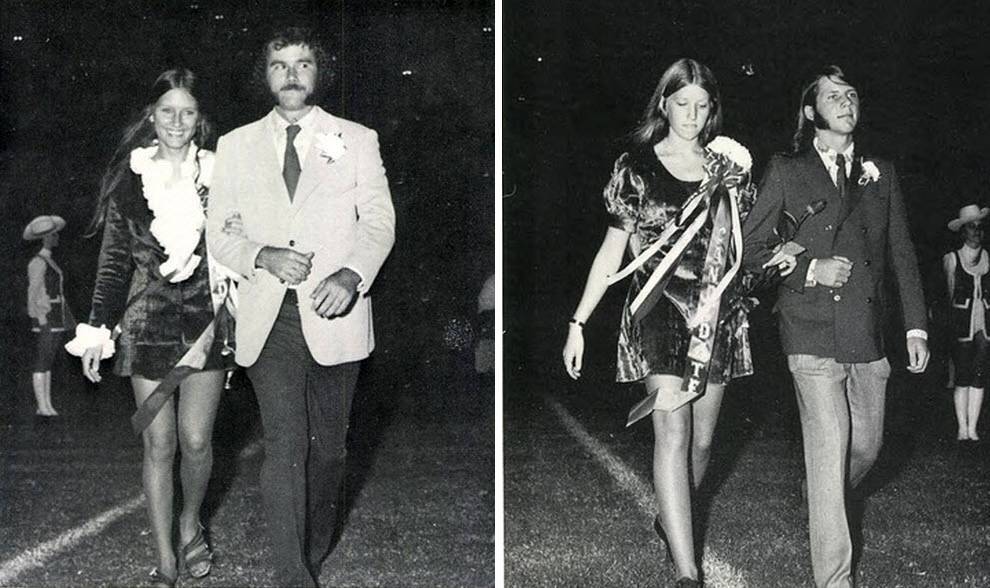 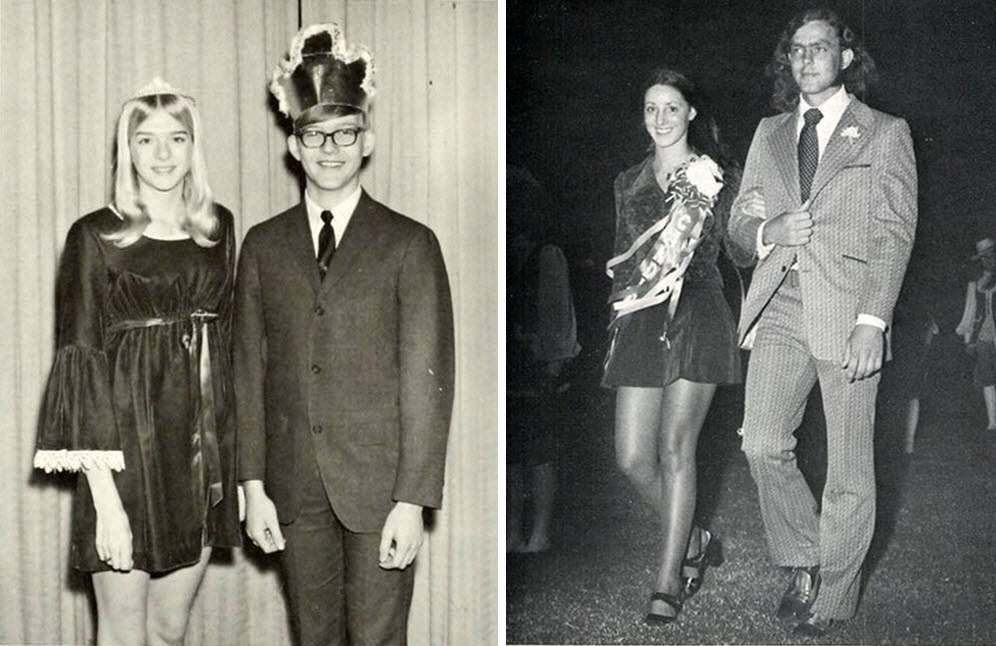 A notice to all Homecoming Queens: Whether your partnered Homecoming King is King Nerd or King Hippie, you’ve got to maintain the dignity of your station atop the popularity scale.  There will be a time for hateful slander; be patient.  For now, just smile and look good in your miniskirt.