Something happened in the 1970s where suddenly all our heroes, our movies, our fashion, our ideals spawned from blue-collar culture. All through the previous few decades, the upwardly-mobile businessman ideal prevailed for men (think Mad Men or even Ward Cleaver). For women, the ideal was the highly manicured living doll (who could pop out children at will). But once the Boomers entered the workforce, this ideal changed drastically. Suddenly, the ideal man was a Burt Reynolds character – not a captain of industry, not well groomed, and likely not to settle down and raise Wally and The Beav. And the feminine ideal changed just as radically – gone were the pearls and fake eyelashes.

Perhaps it was a natural outcome of the hippie counter-culture’s anti-establishment, anti-elite dogma. Don Draper was “The Man” and thereby the enemy. Or, maybe it was bound to happen in an economy on the skids with a wildly unpopular war being waged. Whatever the reason, there was a lust for lowbrow which manifested itself in popular culture – and here are a handful of examples.

Hick Flicks (AKA Hixploitation): the term refers to films (and TV shows) which reveled in the blue-collar Southern culture. Everything from The Dukes of Hazzard to Smokey & the Bandit. You wouldn’t expect this would be where the hippie ideal would find a home, but it’s there if you look. Each features a blue-collar anti-hero givin’ it to The Man.

Whether it’s Gator McClusky in White Lightin’ (Burt Reynolds), Philo Lebeau in Any Which Way But Loose (Clint Eastwood) or Billy Jack, the guy is 100% anti-establishment, completely free of the shackles that come with working in business and industry. They’re sweaty, they’re badasses, they’re sex machines and they stand for nothing except personal freedom. This ideal may have started with Peter Fonda in Easy Rider, but it swept America via a million anti-heroes in Hixploitation offerings throughout the decade. Here are but a few examples… 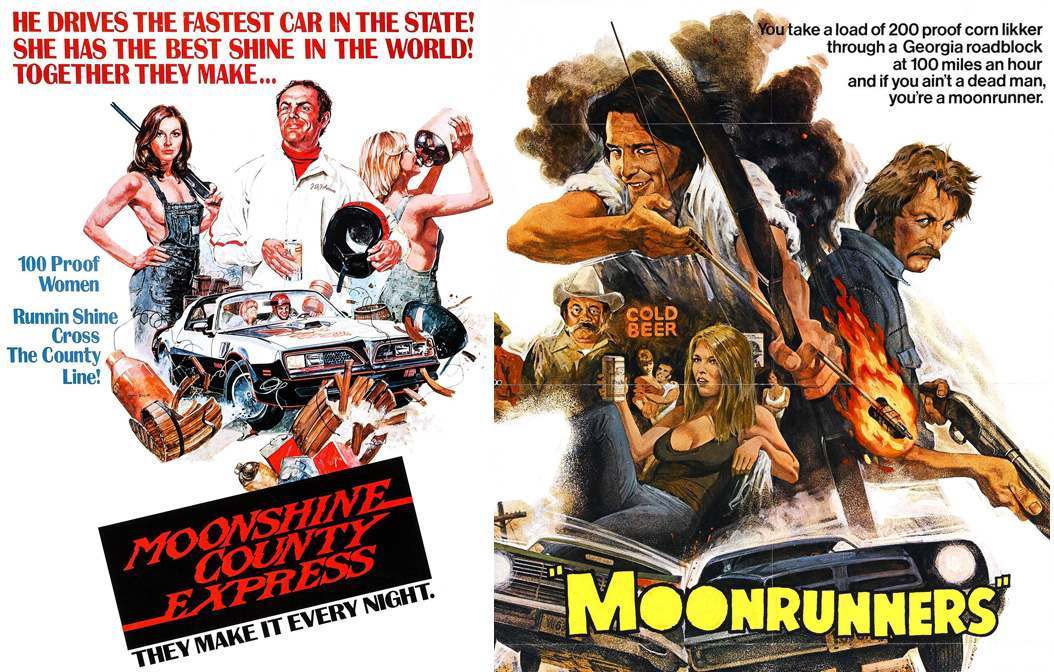 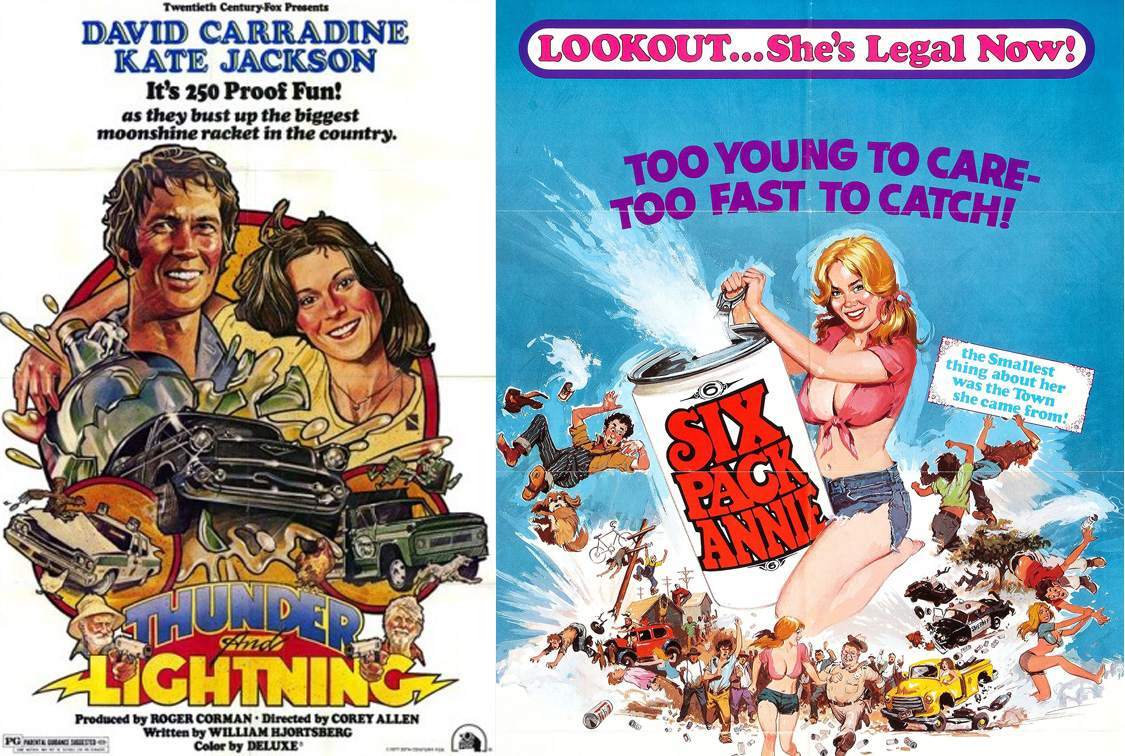 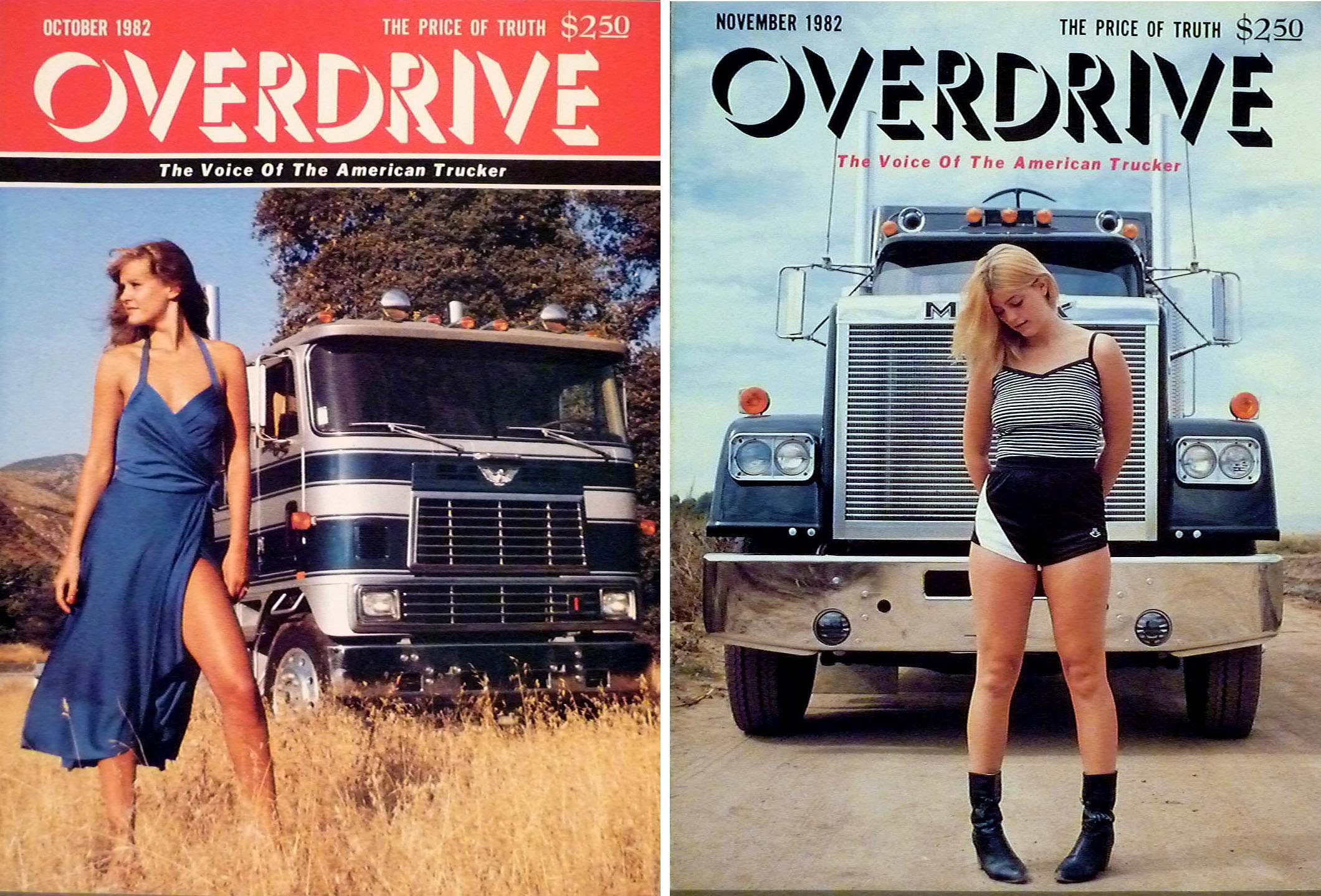 We all know that truckers ruled in the 1970s, but did you ever stop to think why? They were the cowboys of the decade – outlaws on their steel horses, shagging women and answering to no one. They were the blue collar warriors… and they had that cool CB language. 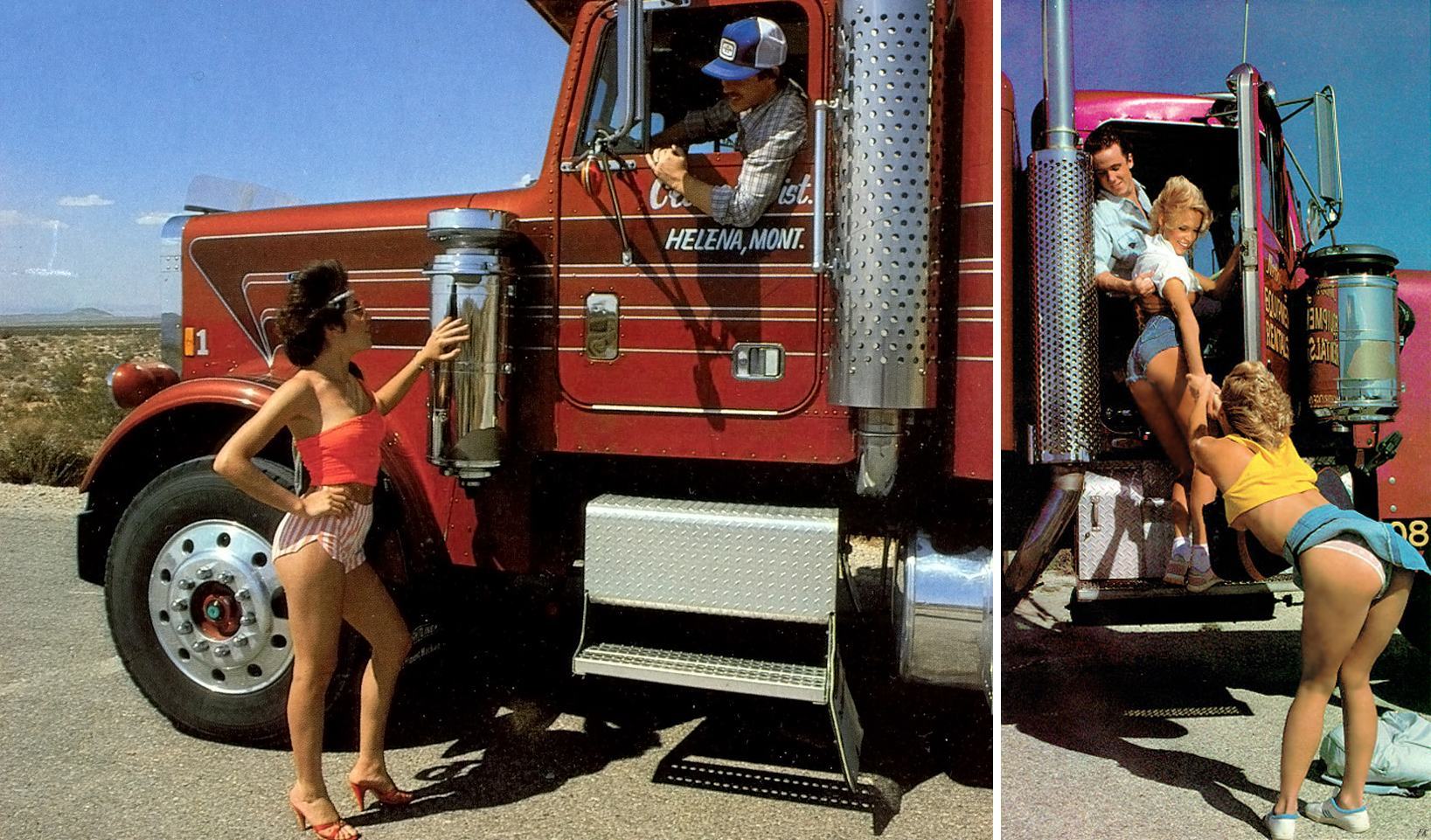 Today, truckers are far, far from our ideal. Where once their grimy semi-impoverished life on the road was celebrated; now, they may as well have Ebola to today’s hipsters and metrosexuals. 70s pop culture overflowed with truckers: “Convoy” was a number one hit, followed up by a movie adaptation. On TV you had “BJ and the Bear” and at the cinema you had a ton of movies which easily fall into the Hixploitation genre. A few examples: Breaker Beauties, Breaker! Breaker!, Citizen’s Band, Coast to Coast, Convoy, Flatbed Annie & Sweety Pie, The Great Smokey Roadblock, The Great Texas Dynamite Chase, Truckin’ Man, etc. 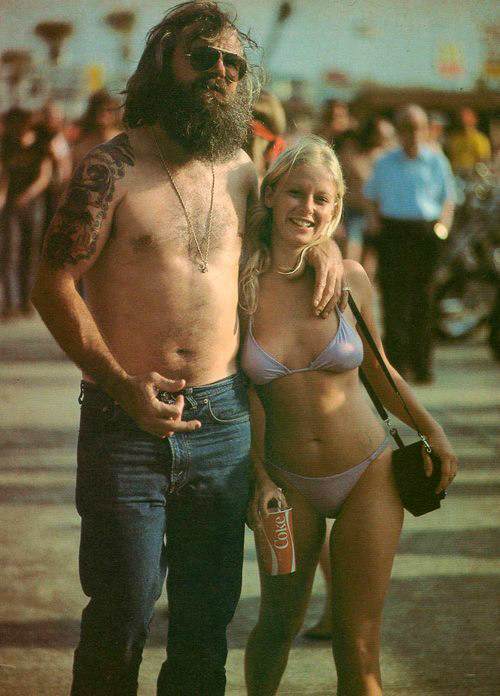 The 1970s were awash in denim and other styles associated with blue collar workers. As mentioned in the intro, the dapper, starched collar look for men was out. In its place: faded jeans, cowboy boots or Hushpuppies, and un-pressed shirts unbuttoned to display a thick, manly pelt.

For women, the June Cleaver/Betty Draper look was jettisoned in favor of a much less polished look. Of course, all of this unkempt natural look would go bye-bye very quickly once the Reagan era took shape. All things are cyclical, and the heavy makeup and accessories would be back with a vengeance by the mid-Eighties.

Once again, we can attribute the sweaty, gritty, long-haired blue collar appearance becoming the ideal to the counter-culture movement. Take a look at a hippie from 1969, and then look at any member of Lynyrd Skynyrd – there’s no difference. Both really, really needed to take a bath.

“Take this Job and Shove It” said Johnny Paycheck, and a ton of other “Outlaw Country” artists echoed his sentiment of anti-establishment. Sure, Merle Haggard, Waylon Jennings, and Willie Nelson had all been around before the counter-culture takeover…. But they were different then. Now, in the 1970s, they had long hair, did drugs, and raised hell. Take note that not only did Outlaw Country rise to popularity, but Southern Rock also came to the fore.

But I’ve devoted a lot of this list to covering blue-collar examples associated with the American South. By no means was this movement limited to that area – you might say it was embraced even more in northern factory towns and urban areas. Take for instance Saturday Night Fever. John Travolta’s character is perhaps the ultimate blue-collar icon. He’s from a lower-class Italian family, works in a hardware store, and lives for the weekends. I’m hesitant to label disco as blue collar music since it started in gay underground clubs and ended up epitomized by Studio 54 (a very un-blue collar establishment if there ever was one). However, the disco craze definitely hit the blue collar world in a big way, and its hostile backlash in the early 1980s may have been just as much about class warfare as it was about homophobia.

5. Blue Collar Ubiquity on The Big and Small Screen 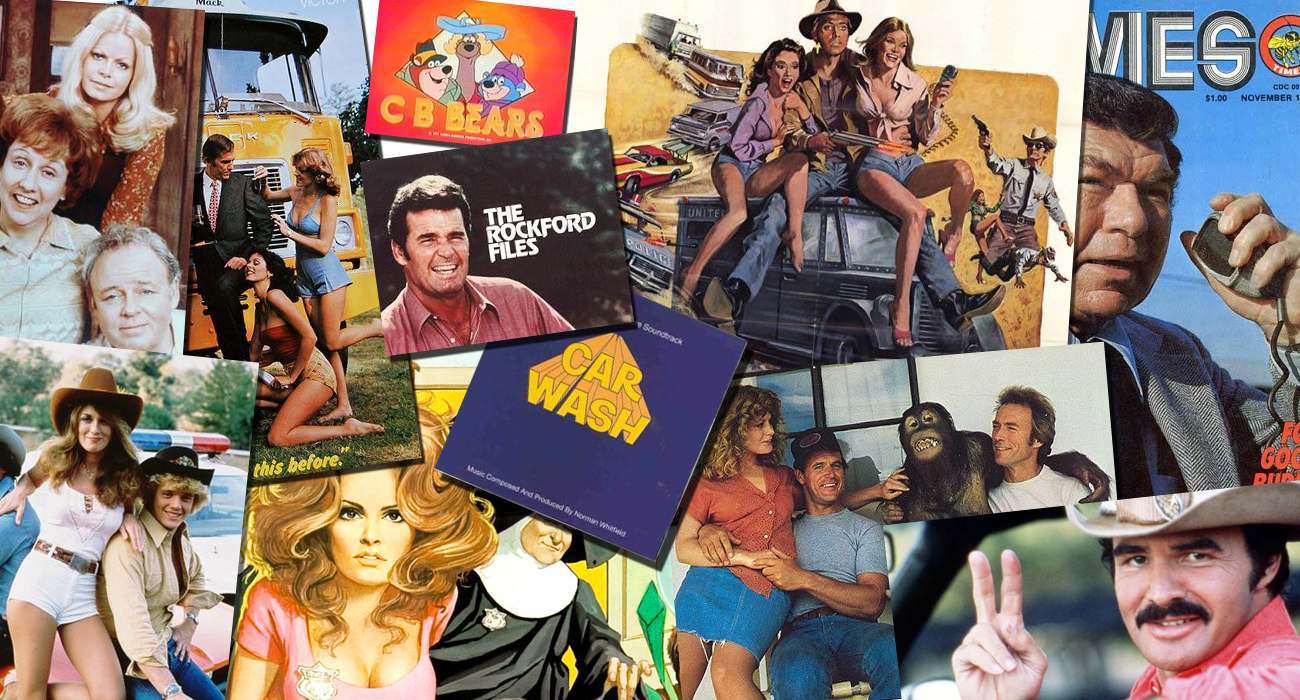 I’ve mentioned Hixploitation in particular because the blue collar vibe is so overt it was almost a caricature , but beyond this genre, there’s a blue collar presence overriding almost every single film from the 70s. It’s so much a part of the fabric of 70s cinema, that the cliché “you can’t see the forest for the trees” seems apt. It’s predominant it’s easy to forget that a titanic shift in the subject matter of cinema had just occurred. For much of the 1960s, mainstream cinema was entertainment, it was James Bond and Mary Poppins. Then came the 70s….

As I’ve said in a previous post – gritty realism was the flavor of cinema for much of the decade (until Star Wars). And gritty realism often meant characters who were unabashedly blue collar. I’ve mentioned Burt Reynolds and Clint Eastwood’s contribution to the blue collar movement, but it goes way beyond a few car-chase flicks. Name any random film from 70-78, and I can say with mathematical precision that there is a 92.8% likelihood the main characters are blue collar. (Okay, I made the number up, but you get my point.) The list of blue collar films is endless: Alice Doesn’t Live Here Anymore, Serpico, The Texas Chainsaw Massacre, Death Wish, Mean Streets, The Last Detail, Rocky, Car Wash, Slap Shot, Dog Day Afternoon, Saturday Night Fever, etc.

Perhaps even more pronounced than the big screen (which still had a smattering of James Bond and Mel Brooks to break up the blue collar tsunami) was television which was almost exclusively the domain of blue collar. All in the Family, One Day at a Time, Welcome Back, Kotter, The Rockford Files, Laverne & Shirley, etc. By decade’s end you had Dallas and Dynasty, but for the most part, the 70s were the heyday of blue collar TV. 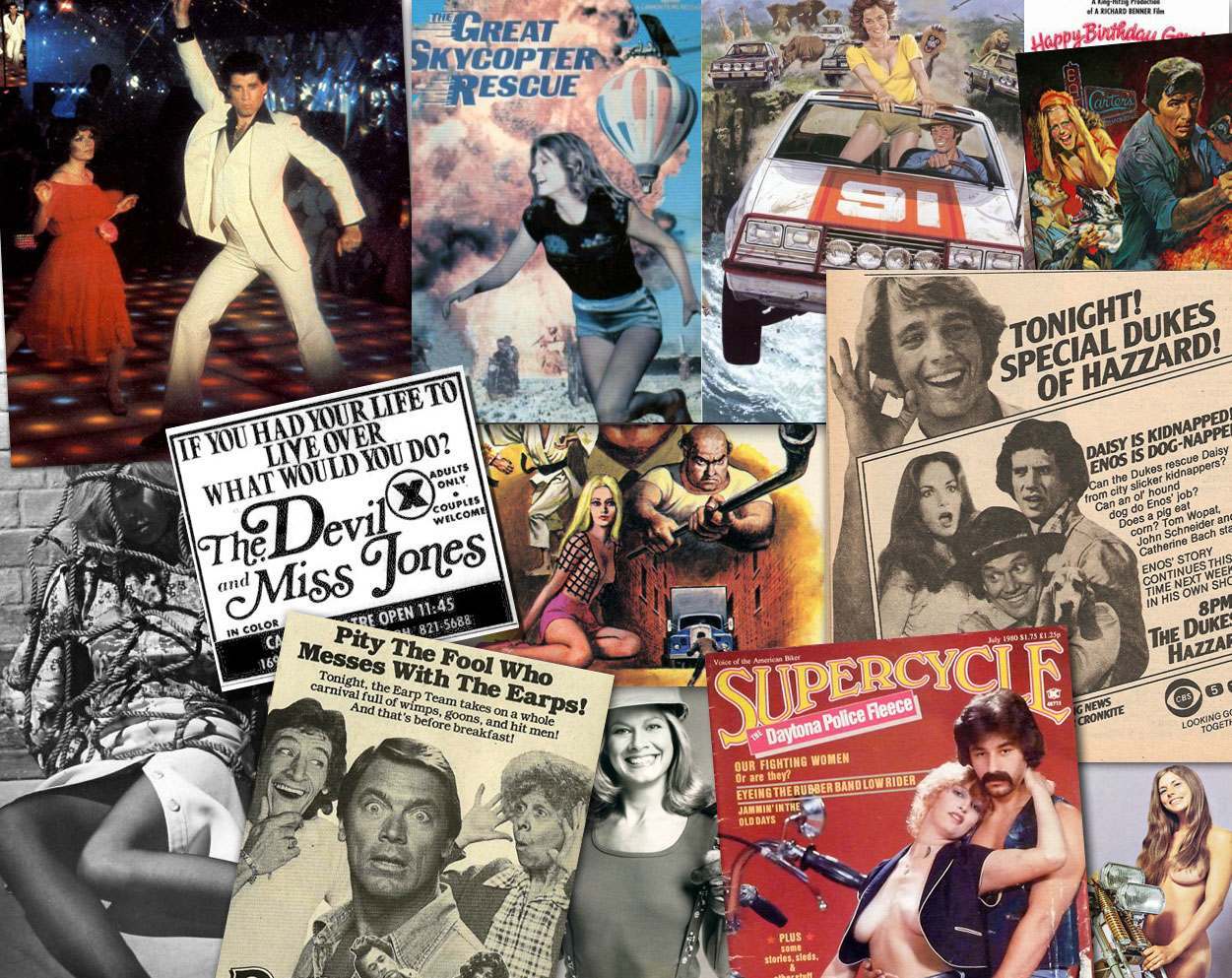 So, I think I’ve made my point. Before I go, I should mention that this topic is covered in one of the best books ever written on the 1970s – Platforms: A Microwaved Cultural Chronicle of the 1970s by Pagan Kennedy. It’s a short read, and if you can find a copy (I believe it’s out of print), I’d highly recommend you give it a read.

I’ll end by offering this question: Will a lust for lowbrow return? America is definitely in an economic downturn, and we are most certainly embroiled in world conflicts against popular opinion…. So the time is rife with potential. Be on the lookout – blue collar may be on its way back!