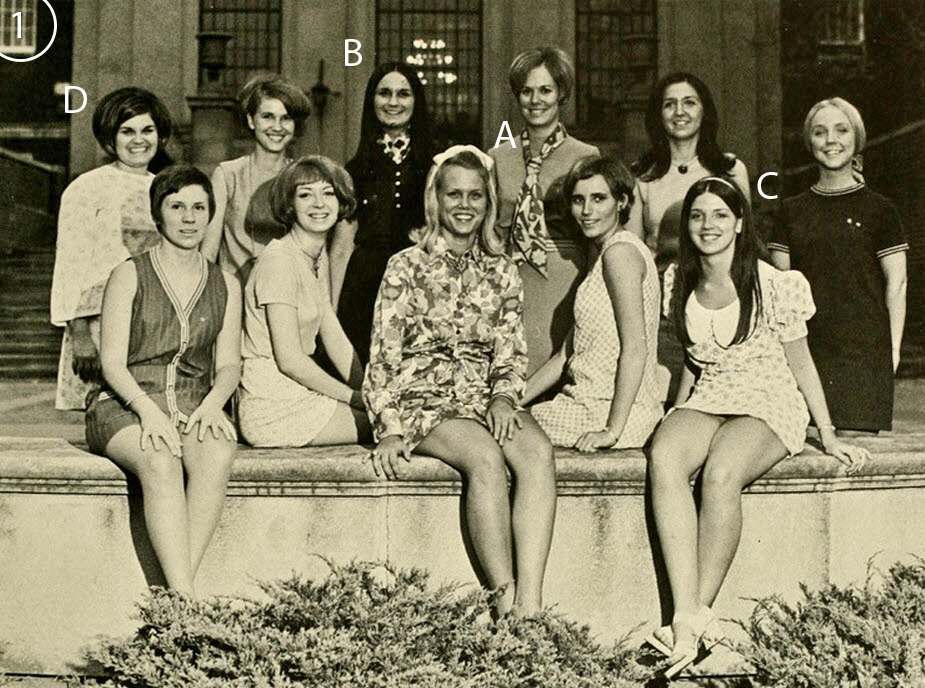 Can you spot Miss Popularity in this photograph?  It’s quite obviously the center of attention (A) who positively outshines the rest of her “inferiors”.

How about the wallflower?  Directly behind Miss Perfect (B) is a gal who could blend into any shadow.  How about the “easy” girl – could it be the front row on the far right (C)?  I hate to judge by high hemlines alone, but I’m just getting that “vibe” here.

And the less said about girl (D) the better.

Yes, high schools are spectacular at splintering boys and girls into defined categories.  The fun is spotting them from a photograph.  So, let’s have a look at a bunch of group photographs, all from the early 1970s high school and college yearbooks, and test your skills.

Note: I’ve concentrated on the ladies in this installment because guys in the early 1970s, for some reason. all look so plain and nondescript: same haircuts, same basic attire, etc.  Also, I’ve numbered each photo so that you can chime in with your own analysis.  So, let’s dig in! 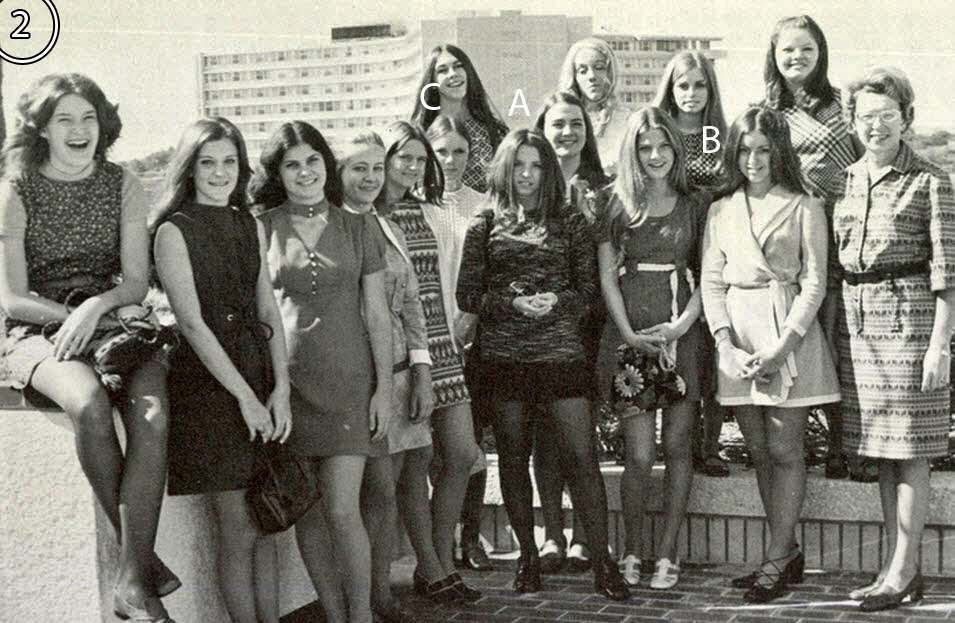 If this were a horror movie, girl (A) would definitely die first.  She’s got the “bad girl” shtick down pat.  Whereas, her friends to her left (B) are definitely the Miss Congeniality variety, and more likely to survive a 1980s slasher.

Girl (C) most assuredly is the “Carrie” of this troupe.  A slightly spooky chick who no doubt possess telekinetic powers and has a religious fanatic mother. 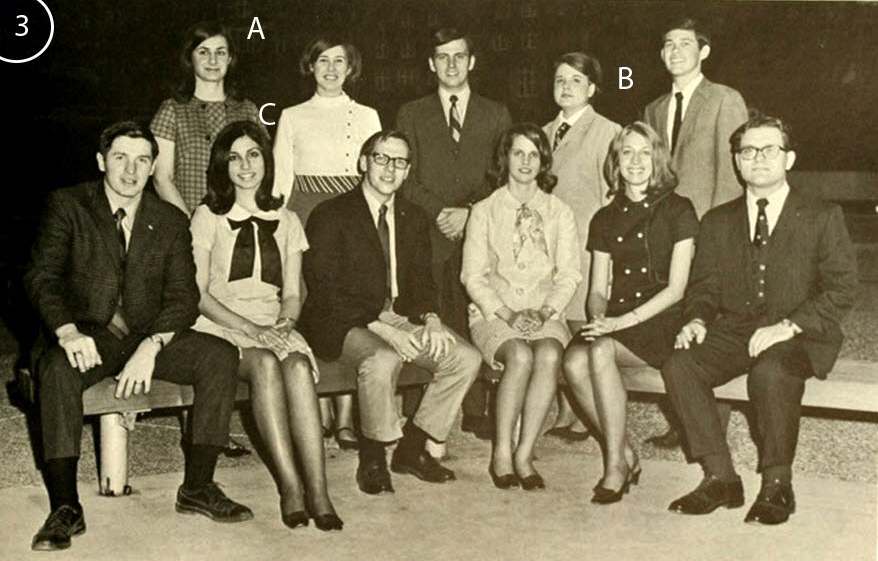 Girl (A) is, as they used to say, “touched”, while girl (B) is one tough cookie – I see prison warden in her future.  Girl (C) looks like Don Draper’s second wife, Megan – so, likely not lacking in the popularity department. 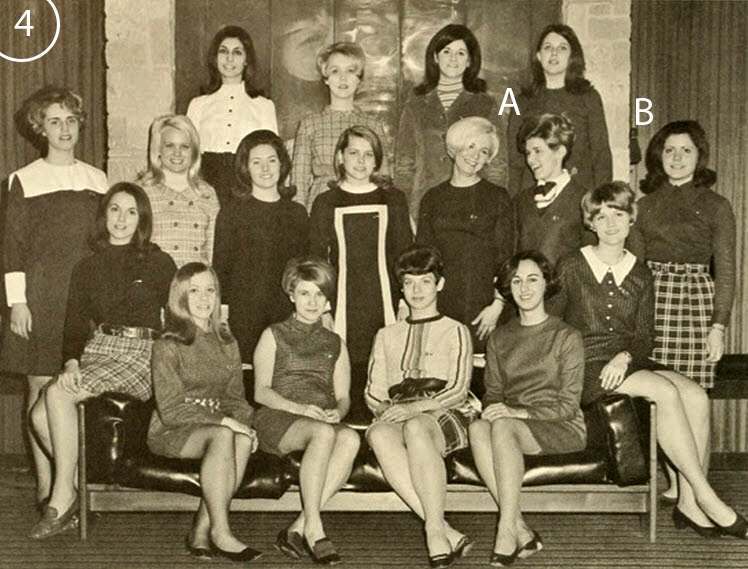 Chatty Cathys (A) just can’t contain their pep for this photograph.  Meanwhile, girl (B) is, as usual, feeling awkward and alone. 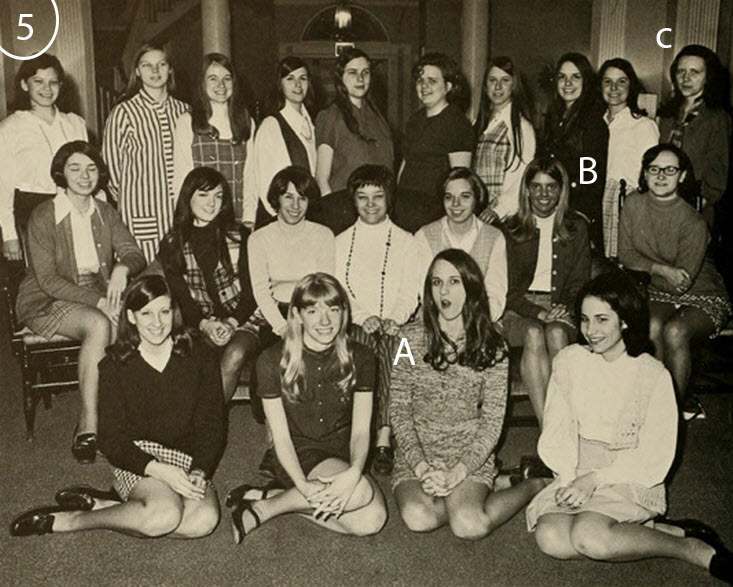 Without question, girl (A) is the wild child.  Arguments to the contrary are invalid.  Girl (B) is obviously suffering from some form of insanity, and I doubt anyone in this group even recognizes lonely wallflower girl (C). 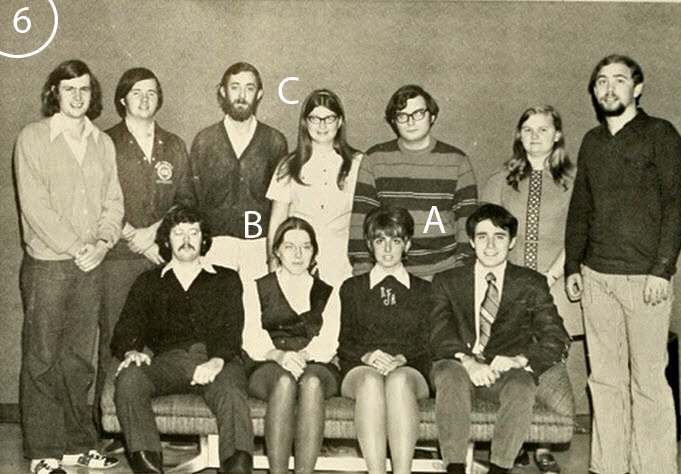 Over-achiever (A) is obviously wanting badly for this photo shoot to be over with so she can get away from these hippies and nerds.  Girl (B) will be writing feminist publications in a few short years – possibly anti-male poetry as well.  Girl (C) is just happy to be there. 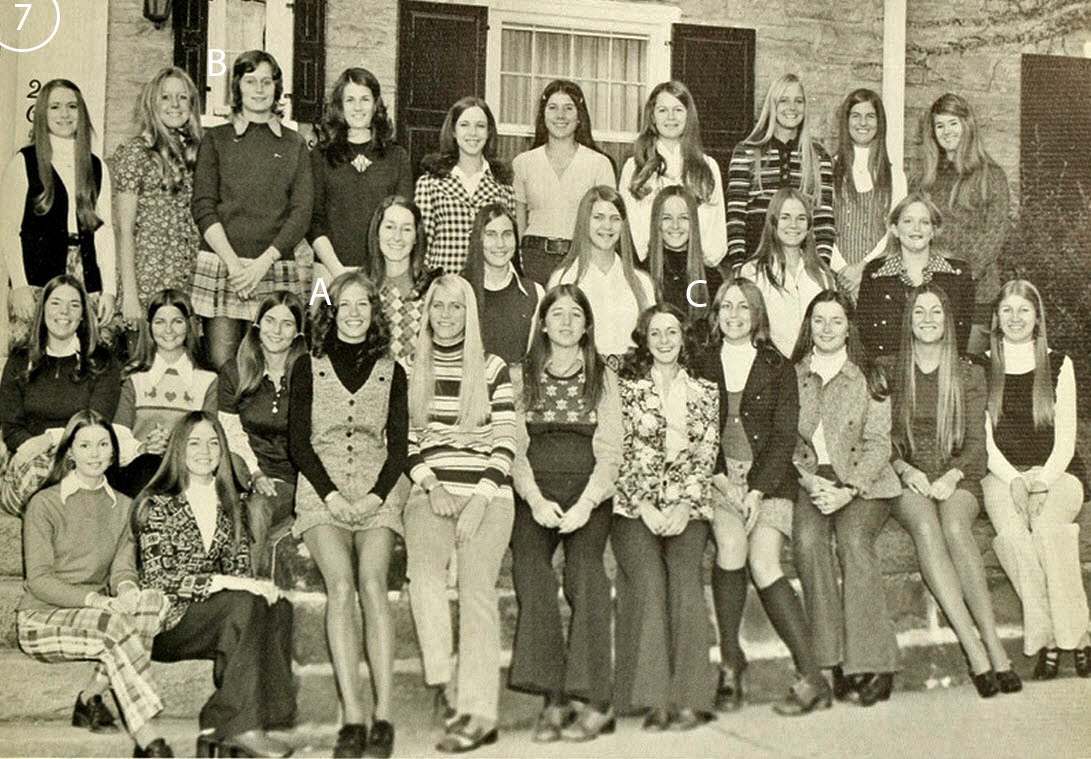 I think it’s easy to spot the Homecoming Queen here – girl (A).  Girl (B) is probably known as the weird girl on campus.  Judging by her posture and that crazed look in her eye, it’s evident girl (C) needs to take a bathroom break. 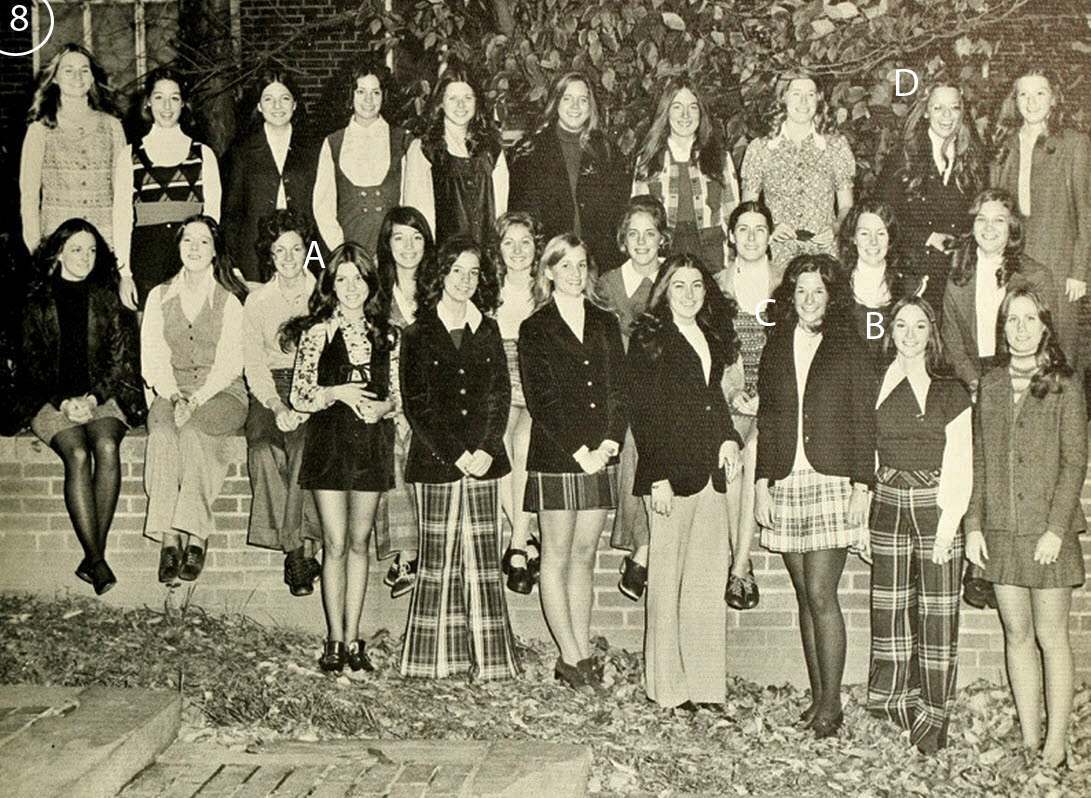 Girl (A) dates college guys – the poor schlubs at this high school haven’t a prayer.  Girl (B) – plaid pants and humungous collars were the style this year – but that doesn’t mean everyone should wear them.   I can’t get a read on girl (C) – Class President or local crazy chick.  Perhaps both.  And I’m sure girl (D) smells like weed. 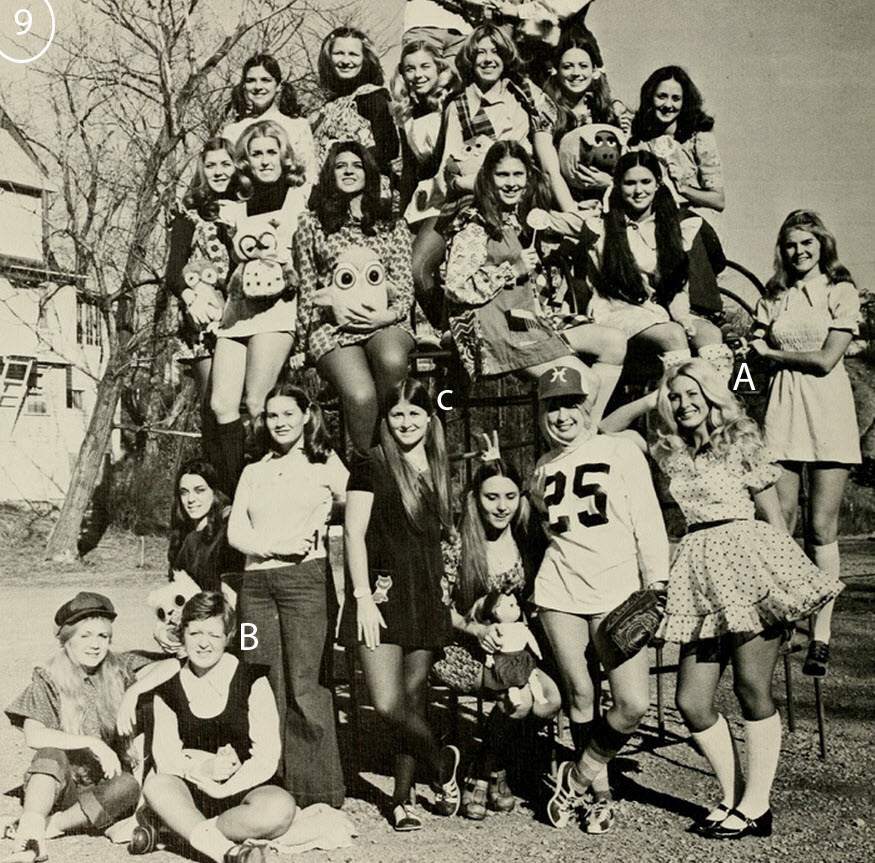 You don’t need me to tell you girl (A) is the prom queen and the subject of dreams for every boy in the school. Nocturnal emission, thy name is Girl A.

Girl (B) and her ‘friend” are clearly playing for the other team.   And girl (C) will rock your world. 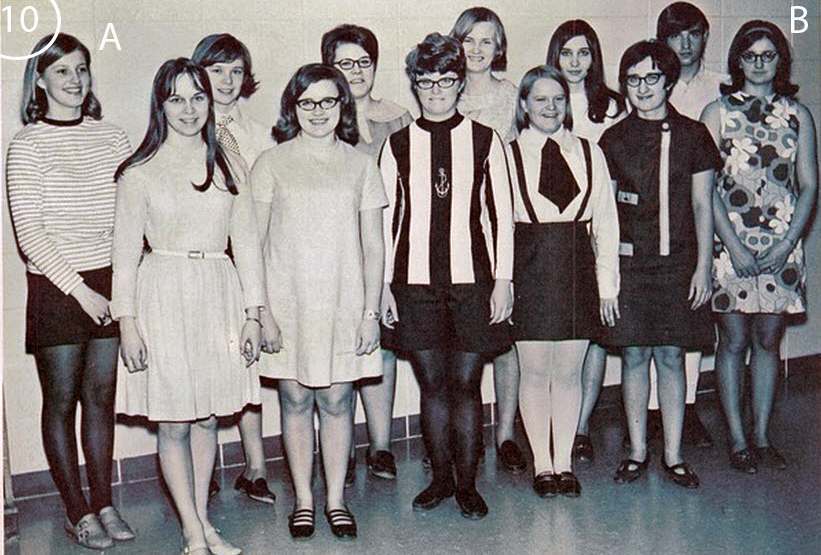 Don’t look so down, girl (B).  Have a look at the high school pictures of supermodels and Playboy Playmates – they all looked a lot like you. 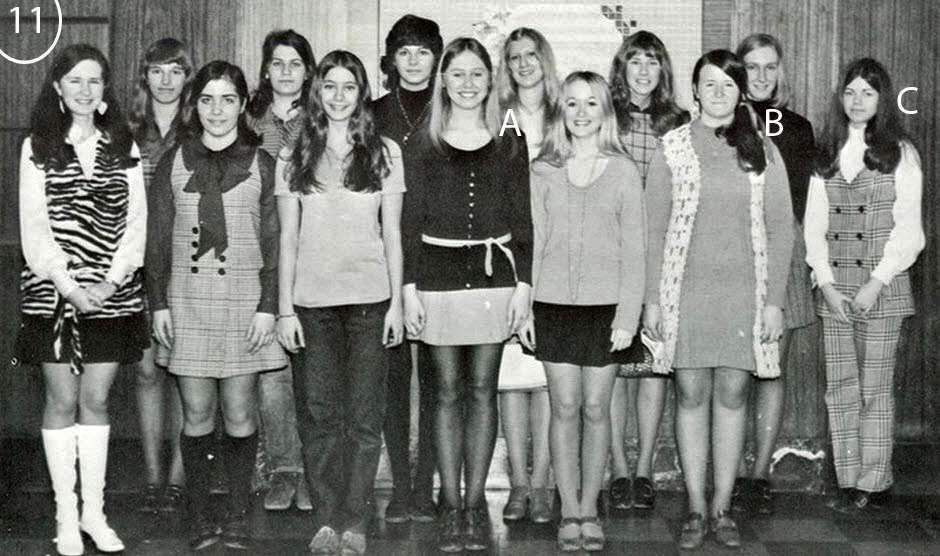 Girl (A) and her friends look perky and innocent enough, but don’t be fooled.  They all bully poor girl (B) mercilessly.  At least girl (C) will have none of it – her conscience is clean. 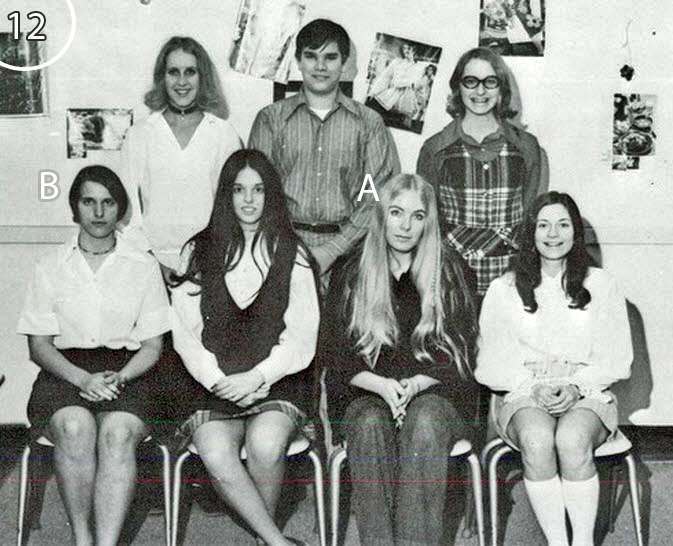 Girl (A) – or more precisely – Wiccan (A) definitely has pot in her locker.  Girl (B) is actually a guy, but I won’t bust his cover.  You’ve got to give him props for taking it this far just to get in the girls’ locker room. 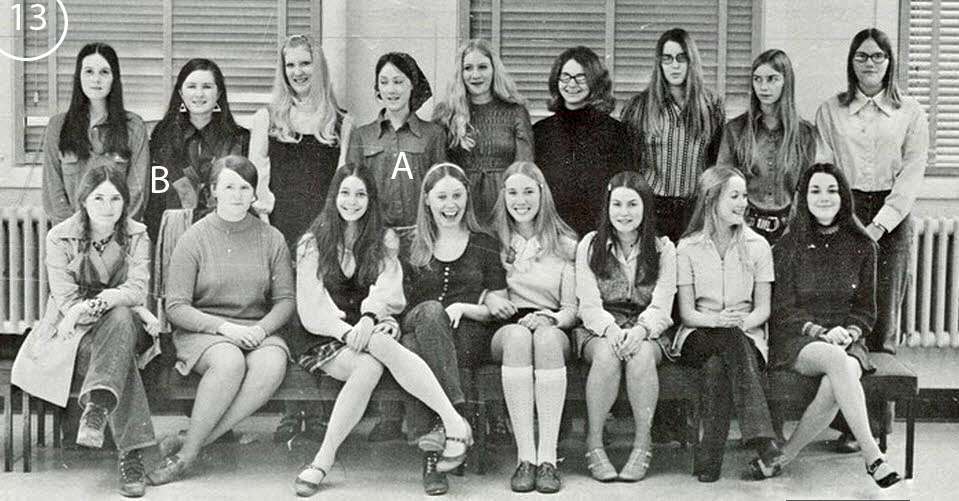 The yearbook photographer must have said, “Happy popular girls front and center….. outcasts and rejects to the back.”   Yet, somehow a couple “unworthy” (B) found their way to the front (making popular girl (A) highly uncomfortable). 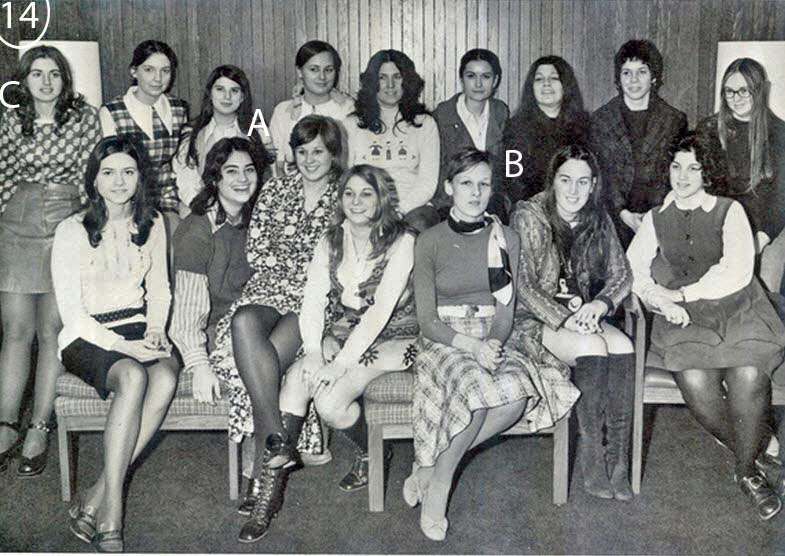 As before, happy popular girls (A) up front.   In the mix somehow is a future feminist (B) rocking the ascot.  Girl (C) is a textbook wallflower.  If it weren’t for that lamp, I believe she’d meld into the wood paneling. 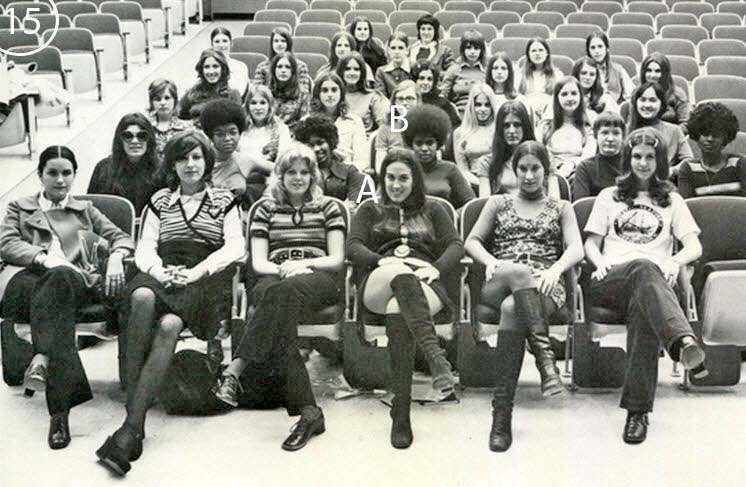 This is obviously a college women’s studies class.  There can be no doubt that girl (A) likes it kinky and dirty.  Girl (B) has had about enough of these white bitches always claiming the front row. 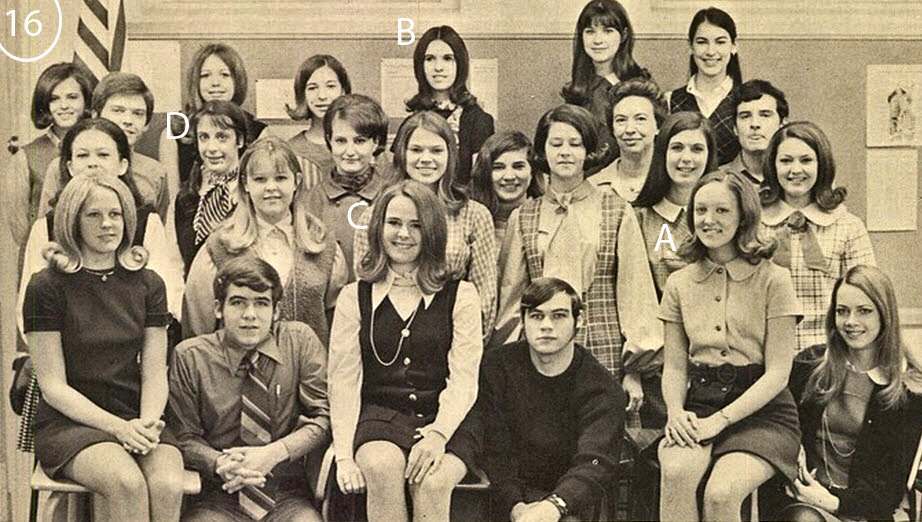 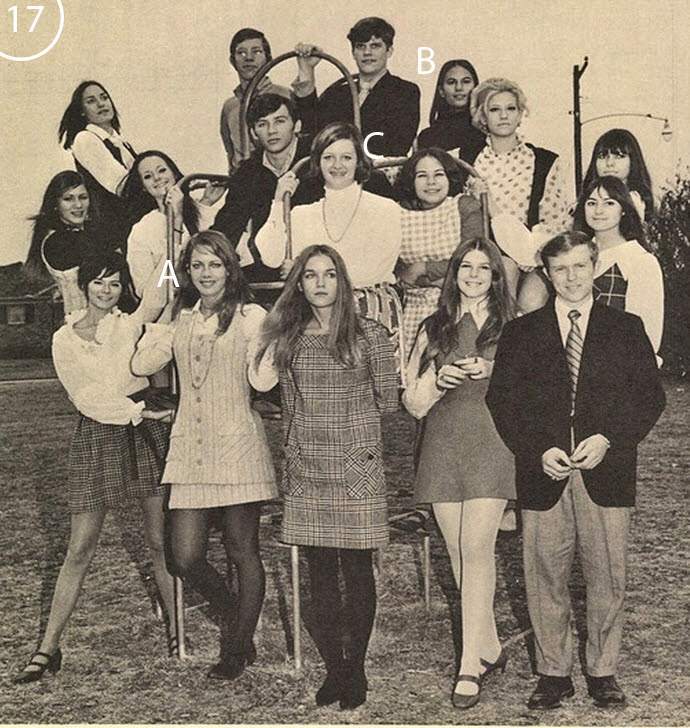 The guy on the right wants desperately to date girl (A), not realizing he has a 0.00001 percent chance of making that happen (and, yes, that means there is a chance).  Girl (B) is clearly the wallflower of the bunch, while mathlete (C) couldn’t be more irritating. 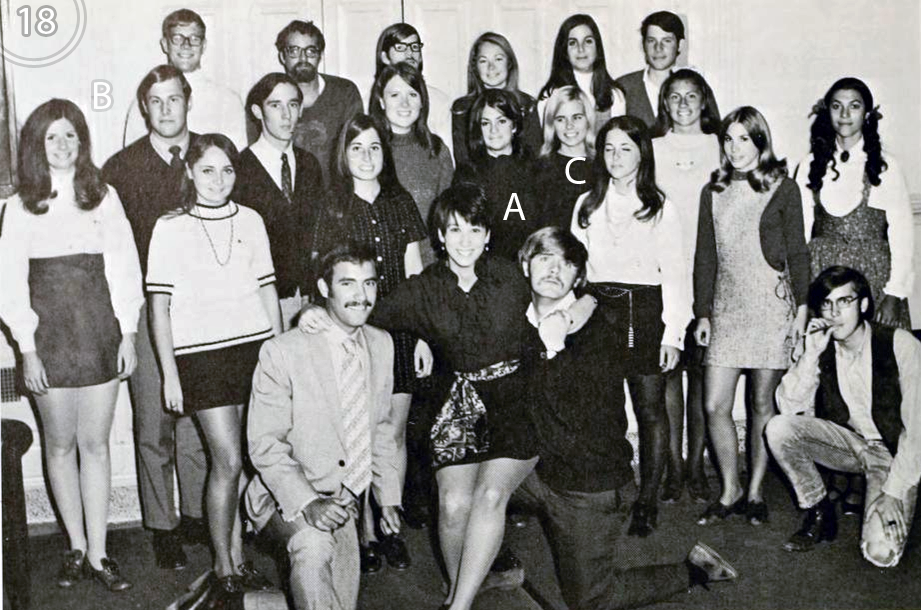 Girl (A) is obviously the party girl – popular with all the fellas in the fraternity, but not exactly well loved among the girls.  I can’t put my finger on girl (B) – at first glance, she’s the classic wallflower.  Yet, with a skirt that unbelievably short, she’s bound to attract attention.  Girl (B) is an enigma.   Unlike girl (C) who is clearly closing her eyes wishing she was on Tom’s lap instead of girl (A). 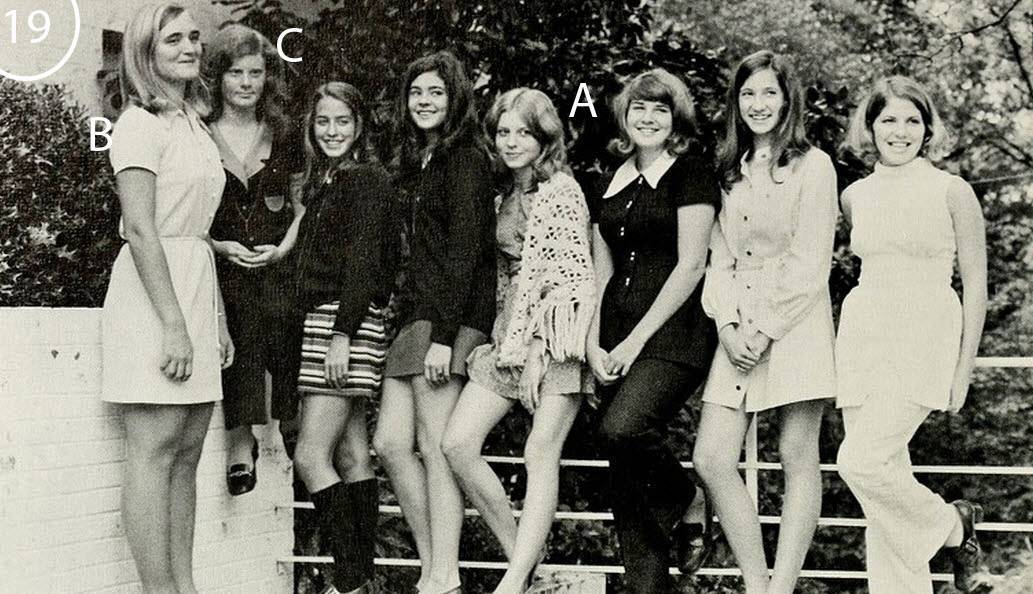 Okay, we’ve come this far, now it’s time to see how much you’ve learned.  Which is the naughty popular girl prone to teasing shy girls till they cry?  Which already knows she’s a lesbian?  Which has recently been released from the mental hospital? 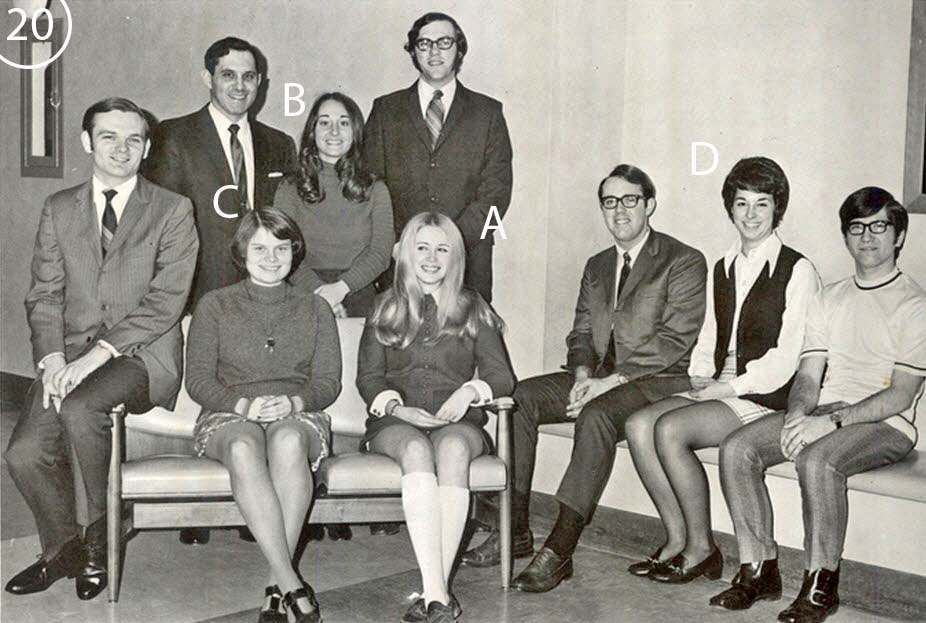 And now your final exam.  Match the letter to the following descriptions.

Seriously wondering if she’s too popular to be in this photo.
Spastic and annoying to all who know her.
Socially awkward academic all-star.  Will major in computer science.
No one would suspect that she has given pleasure to 3 out  5 of these guys.