The ketubah (plural ketubot) is a public marriage contract signed by two witnesses and then read out-loud in Aramaic during the marriage ceremony, in accordance to rabbinic law.  The ketubah is designed to prevent men from treating their wives lightly. The colors, style and graphics are of their place and time. 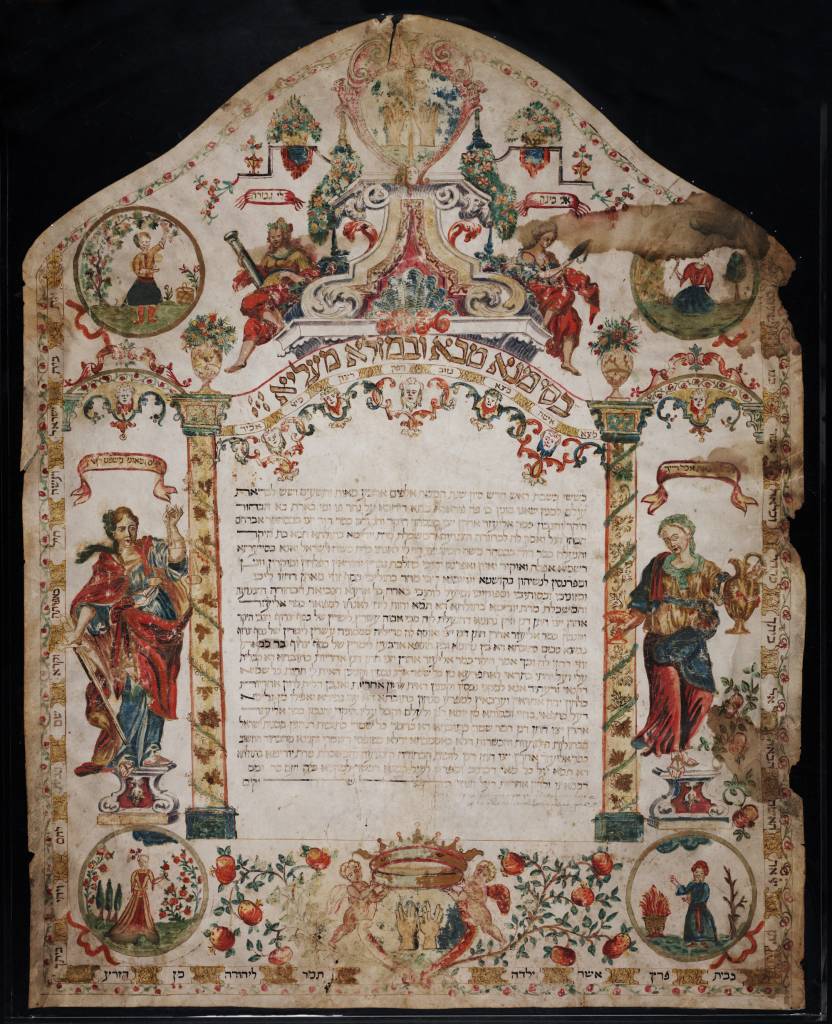 Ketubah : Ferrara, Italy, 1736, May 11.
Marriage contract, manuscript, ink and paint on vellum, dated 1 Sivan 5496 at Ferara (1736). The sign of the outspread hands on the top and the bottom indicate that both the bride and the groom are of priestly families. The name of each of their families thus ends with Kohen. The two figures on top represent wisdom (right) and courage (left). The four cartouches along the inner border depict the four seasons. The writing along the border is from the Book of Ruth. The two large figures on either side of the document represent plenty (right) and justice (left). The pomegranates on the bottom and in the cartouche, depicting summer, symbolize fertility.

Ketubah decoration not only adds beauty and meaning to what otherwise would be a rather dry legal document, it has much to teach about the individuals and the communities for whom they were produced. Italian ketubot reflect the openness of Italian Jewry to the rich artistic heritage of its surrounding culture. The illumination of marriage contracts from Muslim lands reflects their cultural and religious norms. No human figures appear in the decorations. Instead the themes are drawn from the plant and animal worlds. This is in keeping with Muslim (and Jewish) sensibilities which frown on the artistic depiction of humans lest it lead to idolatry. The only Jewish communities from which we do not have hand decorated ketubot are those of Eastern and Central Europe. According to the scholars Shalom Sabar and Vivian Mann this is because among Jews in these geographical areas, known as Ashkenaz, ketubot were viewed as rather standard, legal documents, and were all identical. 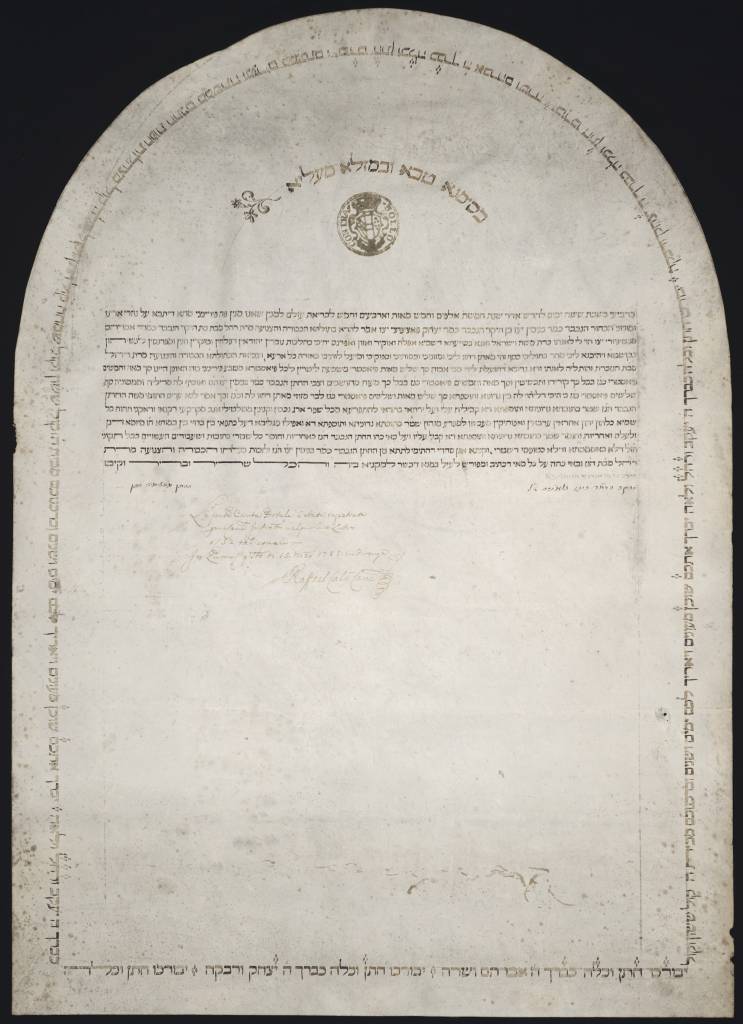 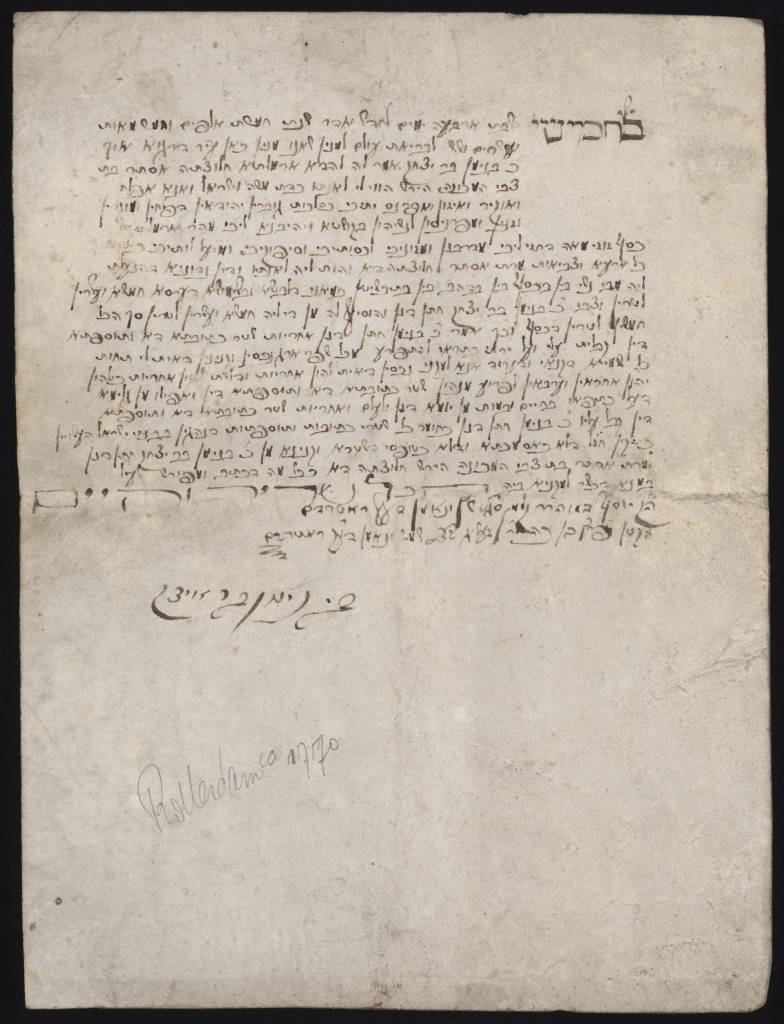 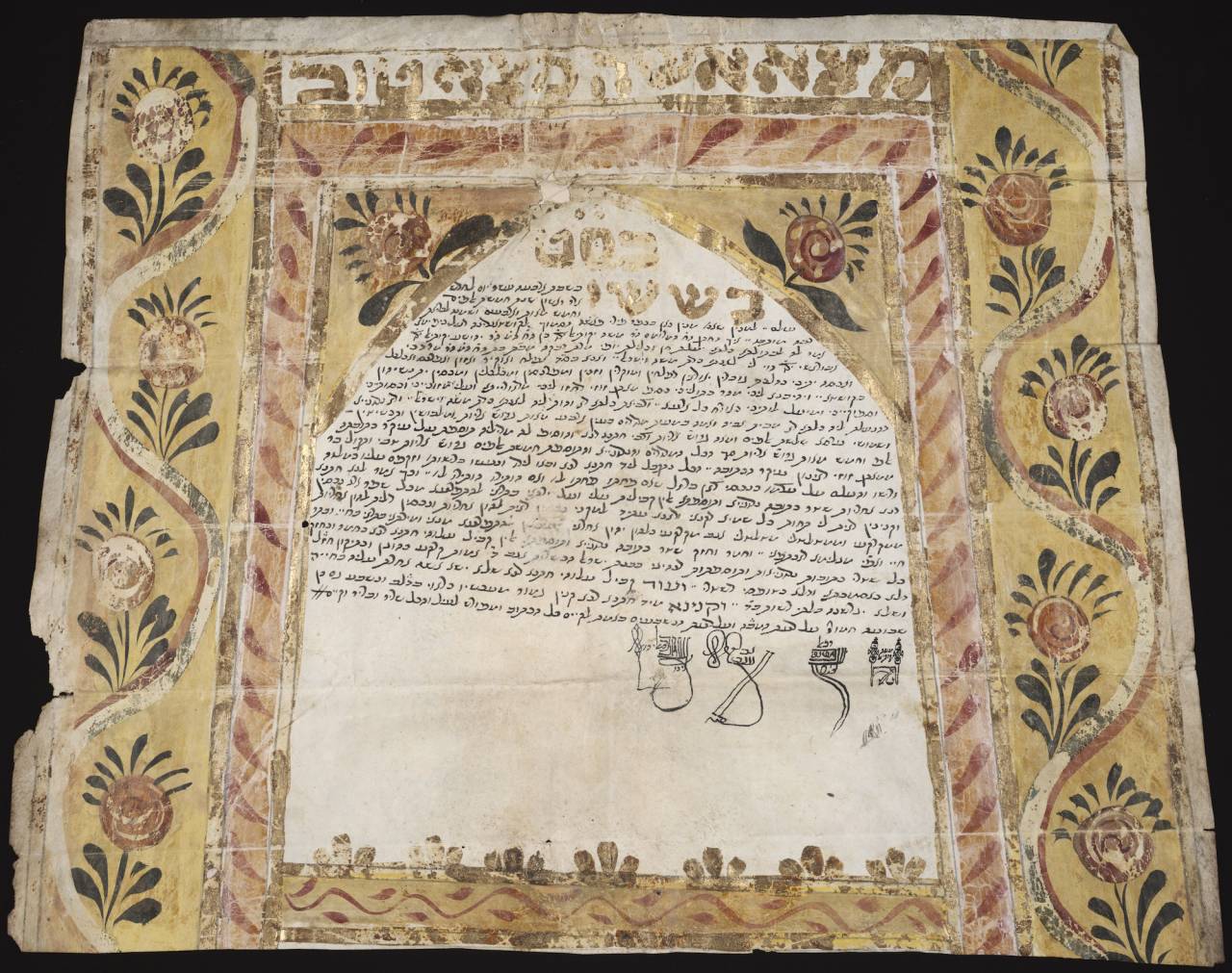 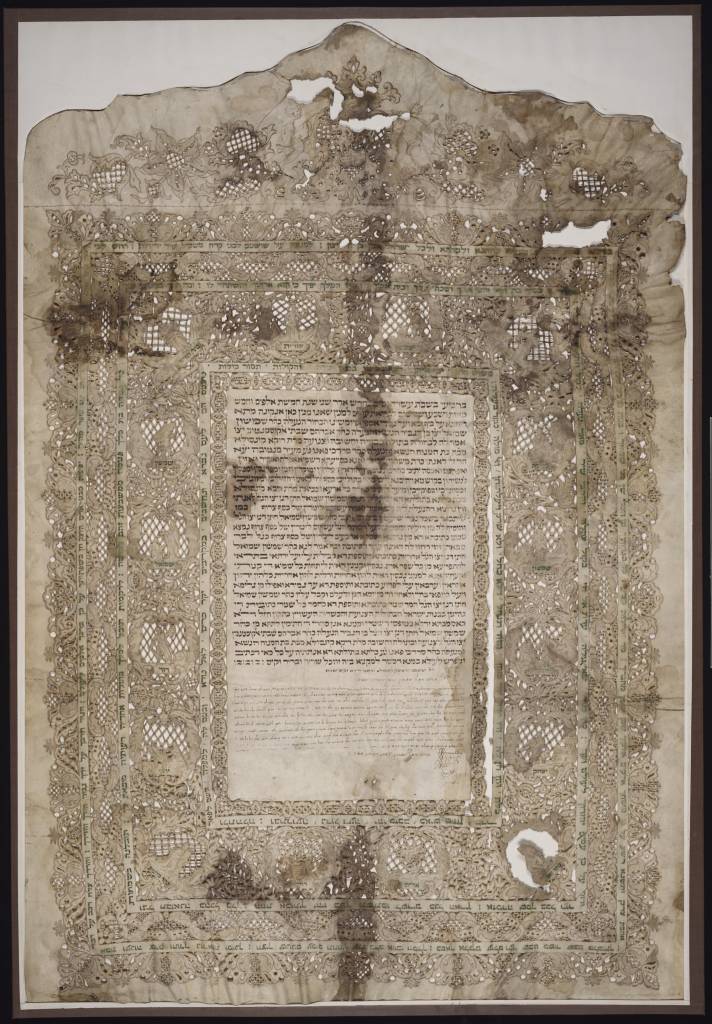 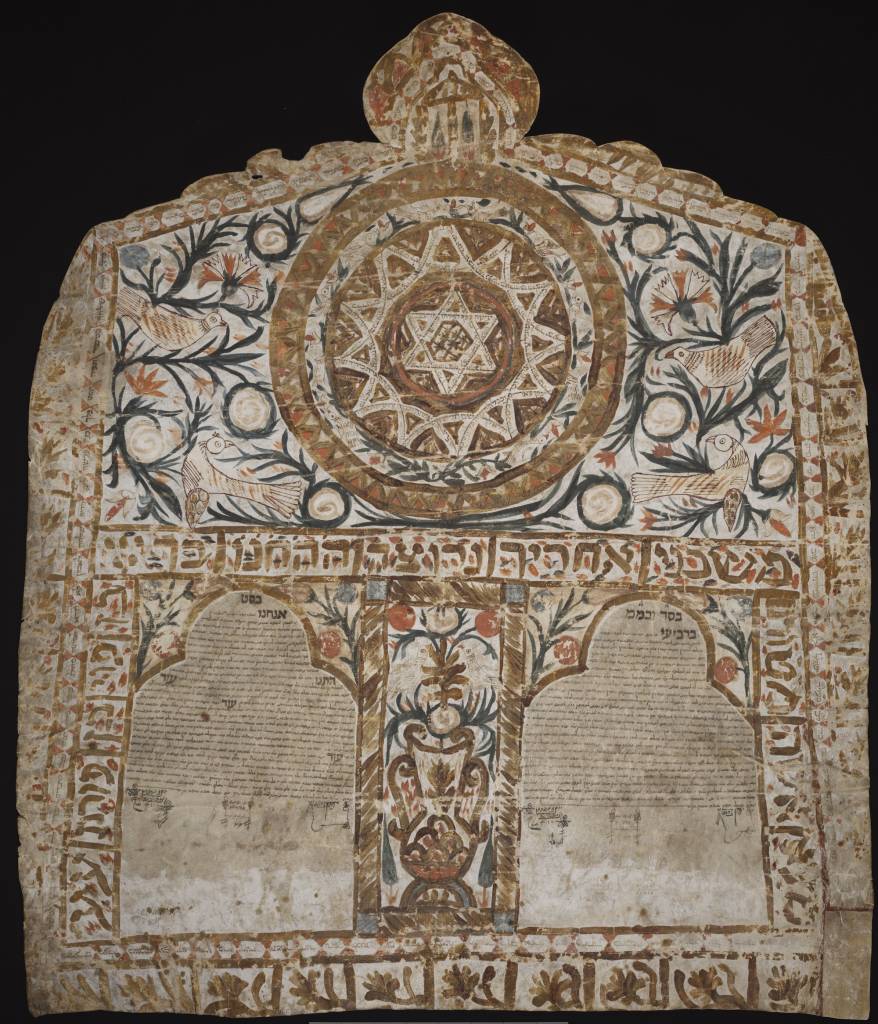 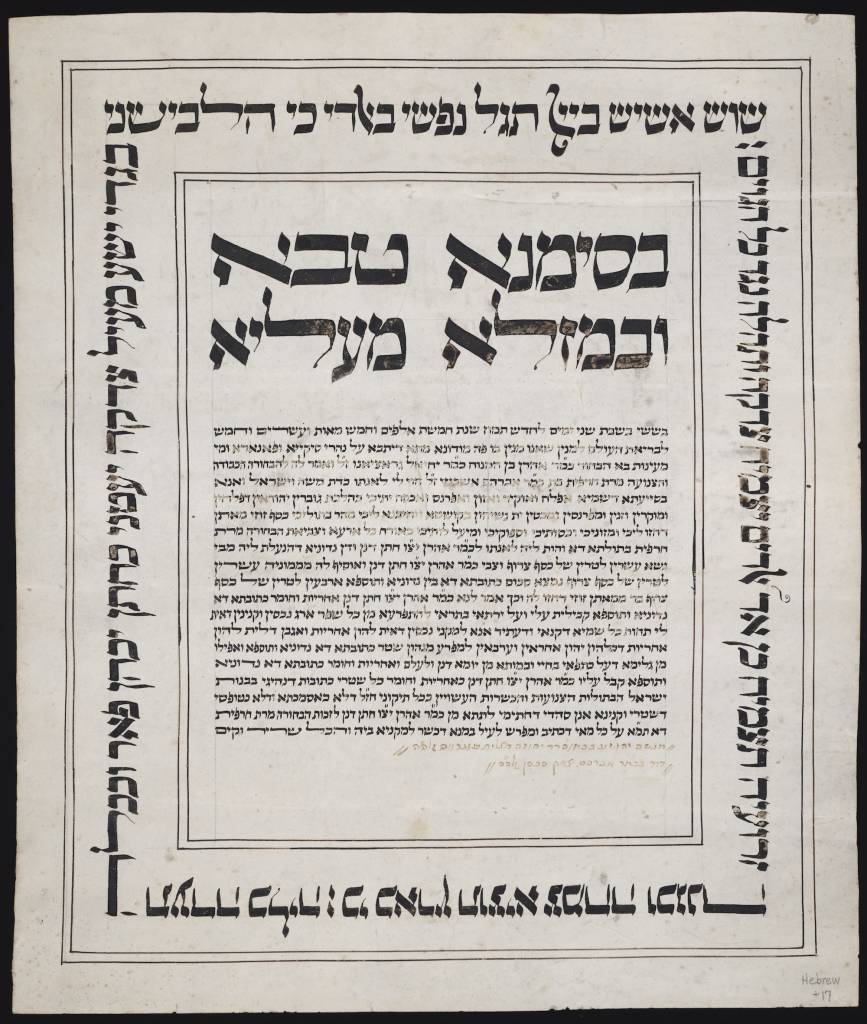 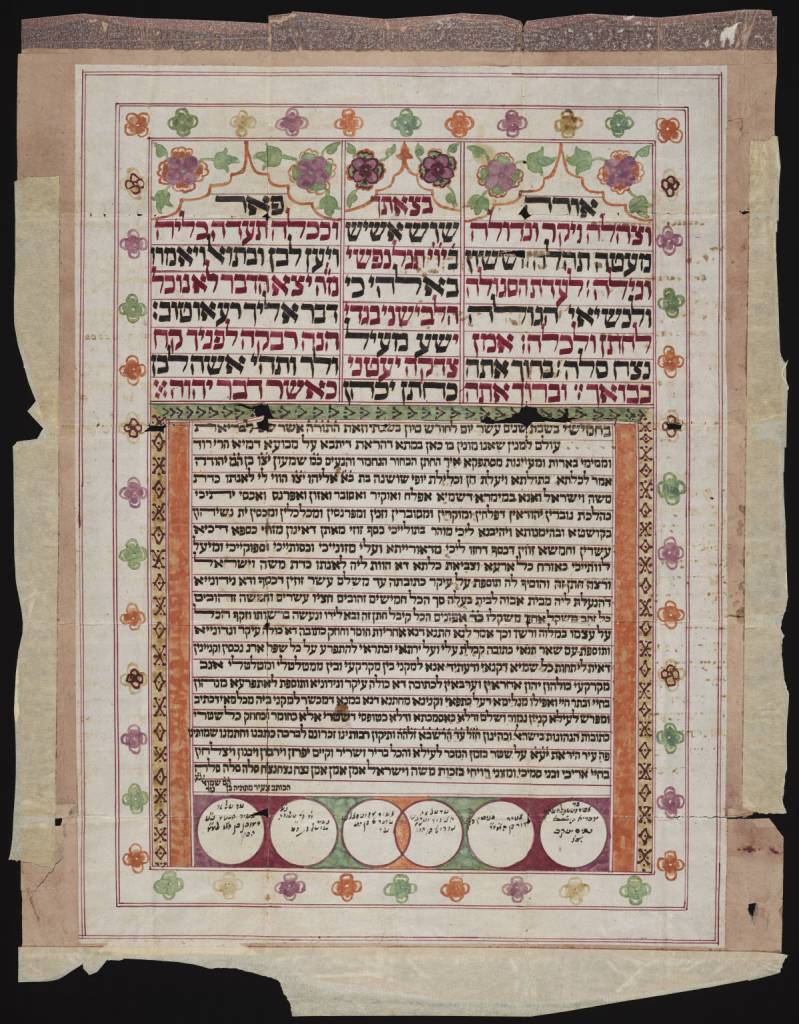 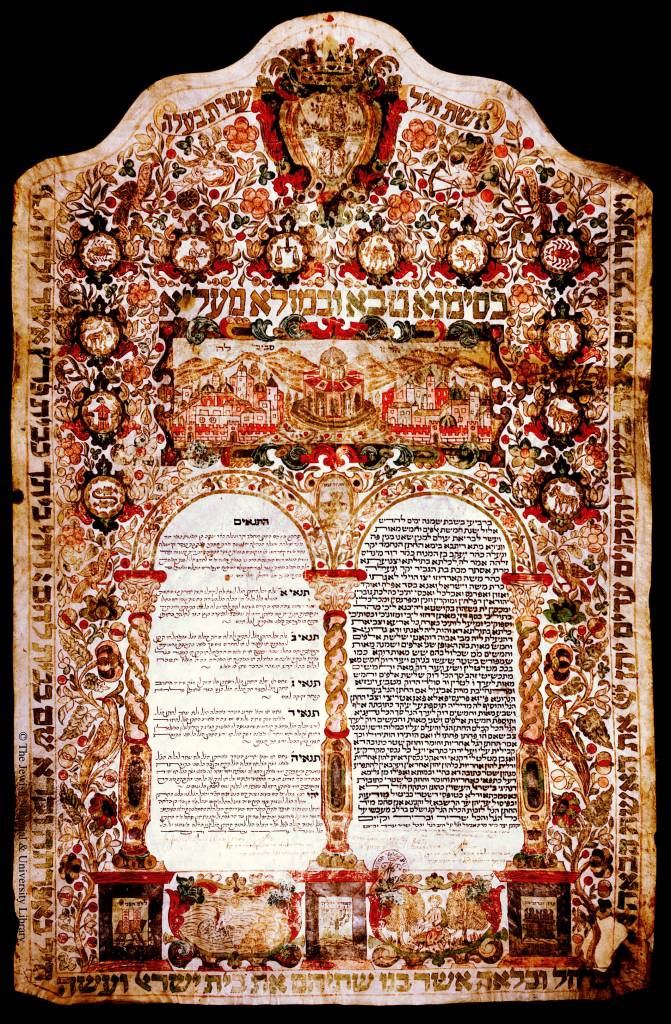 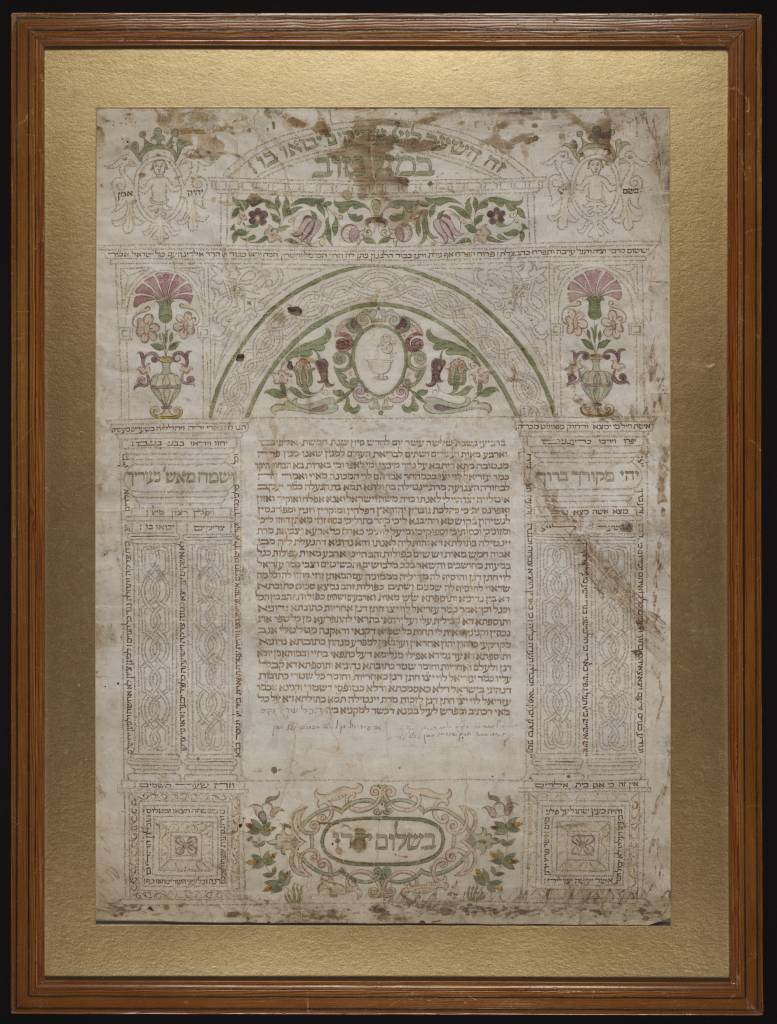 Ketubah : Mantua, Italy, 1662, May 31. Bride: Yintilah (Gentila) bat Ya’akov Italiyah.
Bridegroom: Azri’el Levi ben Avraham Levi Mai.
Abstract:
Marriage contract, manuscript, ink and paint on vellum, dated 13th of Sivan 5422 (1662) at Mantovah. The text is framed by an elaborate arch. At the top of the arch is the statement This gate is for God, only the righteous will enter through it. Within the arch above the text is a cartouche with a picture with a pitcher pouring water into a basin. This image is in honor of the bridegroom who is a Levite. Throughout the ketubah are Biblical quotations written 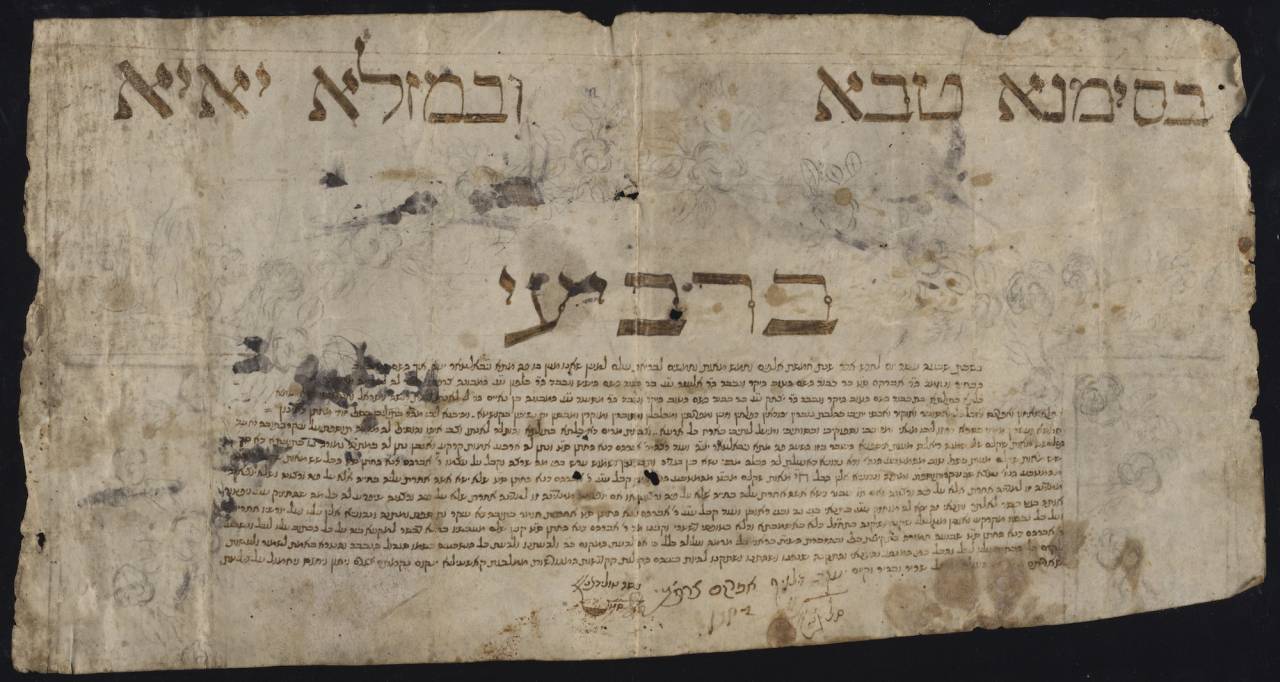 Ketubah : Gibraltar, 1790, March 3.
Marriage contract, manuscript, ink on vellum, dated 17th of Adar 5550 at Gibraltar (1790). The text is in cursive. The outlines of a decoration appear in pencil, but the decoration was never completed. It would appear that the bride and groom were of Shepardic (Spanish-Jewish) families. The text includes a prayer that God show his mercy and protect and preserve “”the exiled from Castile”” and eventually avenge the injustice done to them. 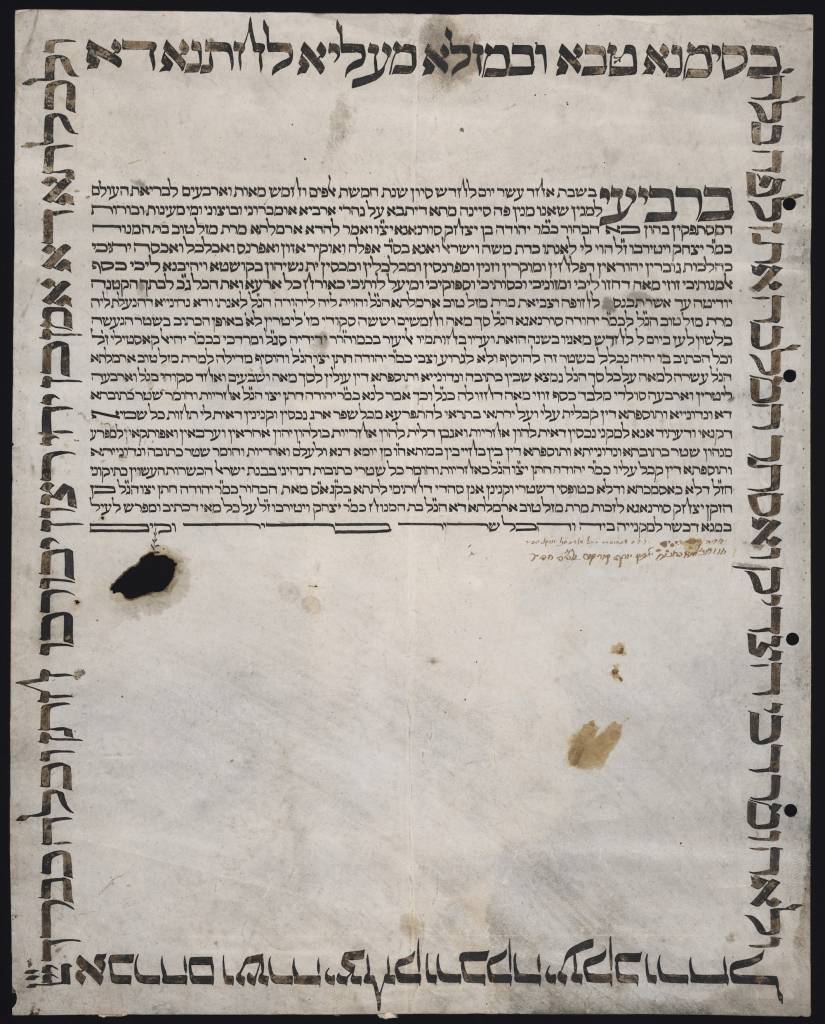 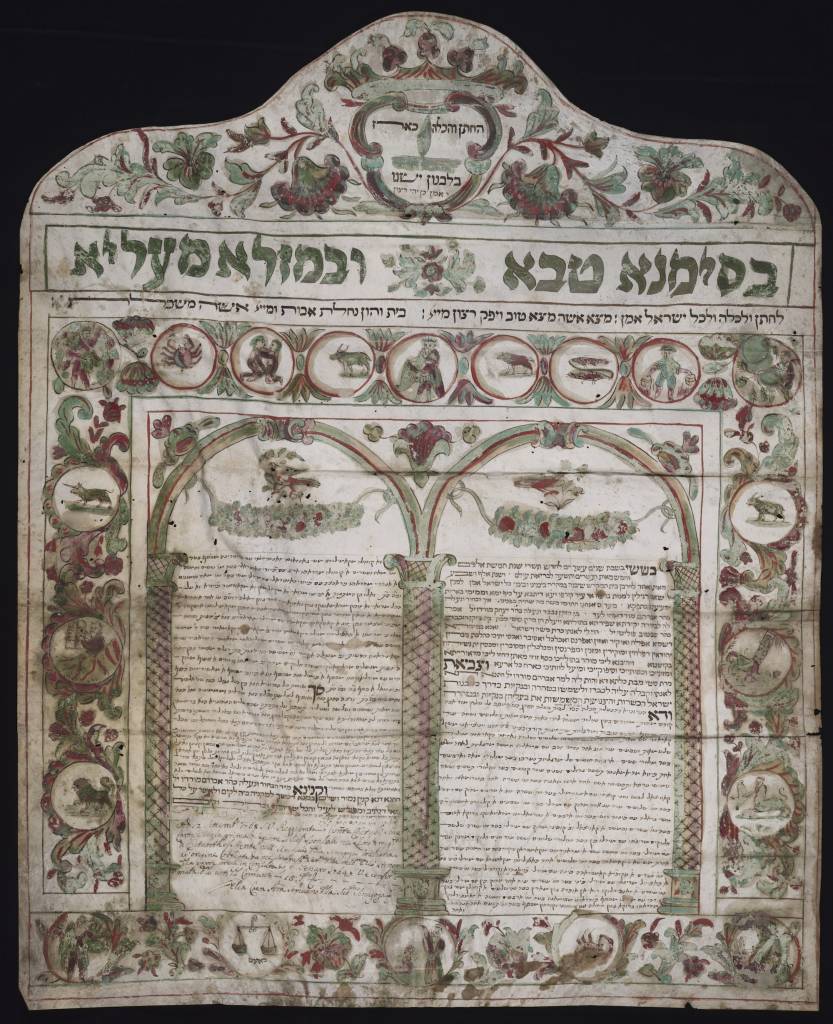 Ketubah : Kerkyra, Greece, 1773, September 29. Bridegroom: Eliyahu ben Yitshak de Mordo.
Bride: Sarah bat Mordekhai de Ozmo.
Abstract:
Marriage contract, manuscript, ink and paint on vellum, dated 12 Tishri 5534 at Korfu (1773). The document has a scalloped top. The text is surrounded by an arch, which is enclosed in a border composed of medallions, in which are images of the signs of the zodiac intermingled with seasonal and biblical scenes. The biblical scenes include the binding of Isaac, Jacob�s dream, and Moses holding the Ten Commandments. The text is in block characters and cursive. Below the ketubah text, the date and place of the marriage, and the signature of Elia Coen Ara, appear in Italian. Traditional biblical citations relating to marriage are incorporated into the border. There are obligations mentioned in the body of the text in which the bride promises to serve her husband in purity as is customary among daughters of Israel. This ketubah follows the unique tradition of Corfu ketubot in dual reckoning of time from the creation of the world and the destruction of the Temple. 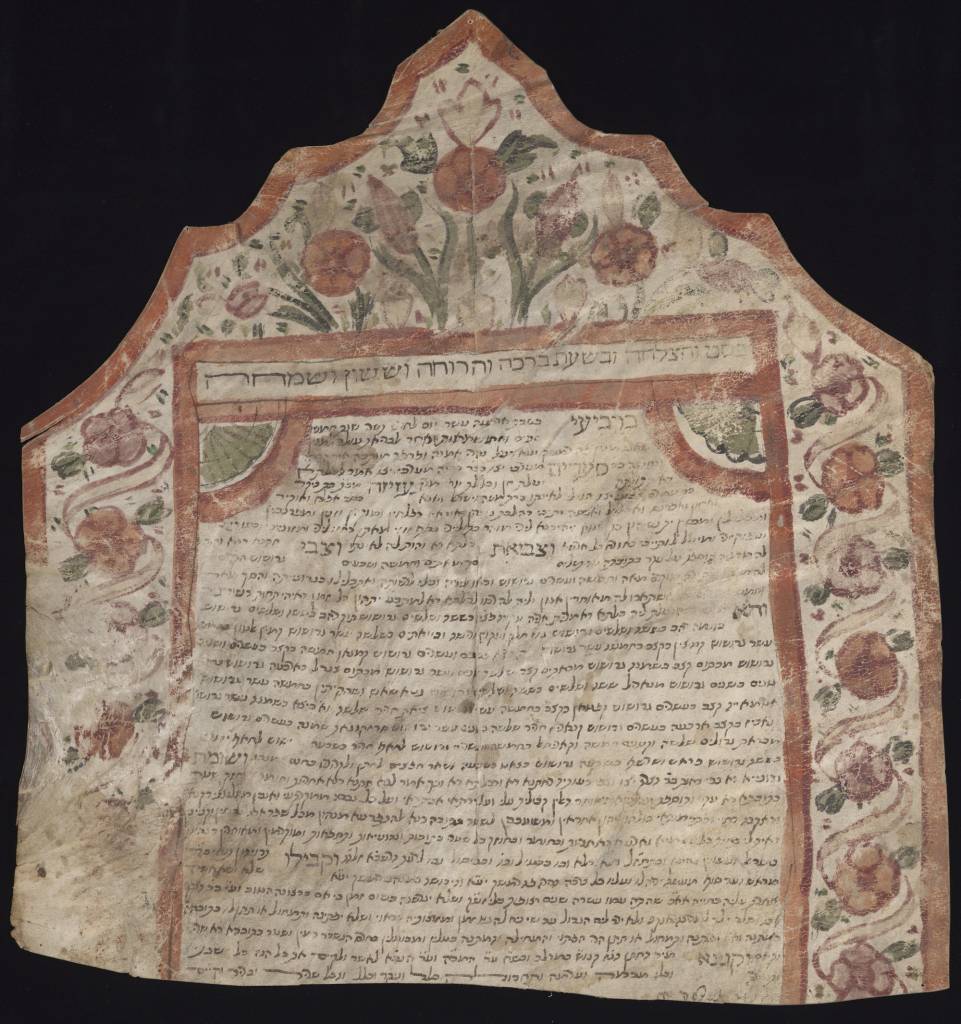 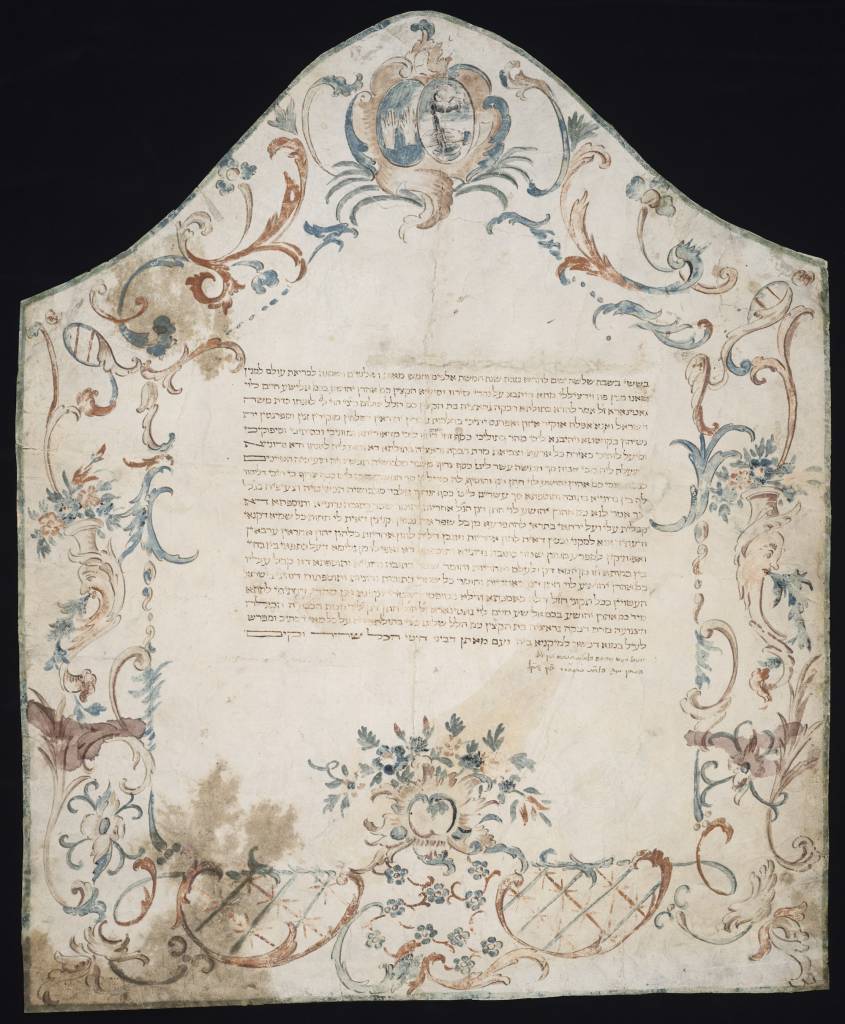 Ketubah : Vercelli, Italy, 1778, January 2. Bridegroom: Aharon Yehoshu’a ben Elisha’ Hayim Levi Gatinara.
Bride: Rivkah Gratsyah bat Hilel Shalom Katsi.
Abstract:
Marriage contract, manuscript, ink and paint on vellum, dated 3 Tevet 5538 at Virtsilli (1778). The document is scalloped at the top and within the upper border are two joined ovals with pictures of a laver pouring water over hands and hands forming the gesture of the priestly blessing to symbolize that the marriage is joining a groom from the Levi family and a bride from the Kohen family. 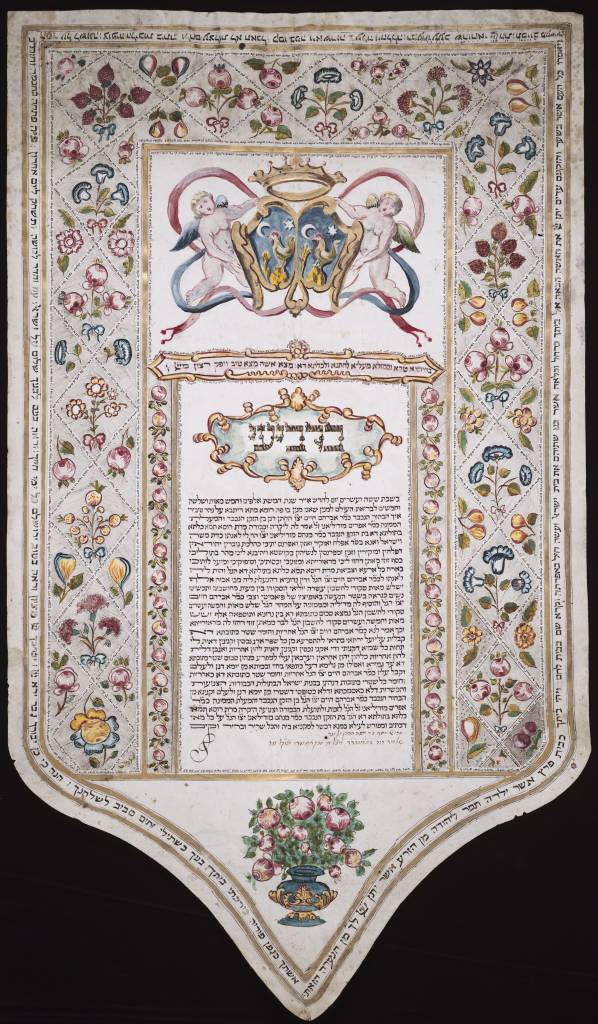 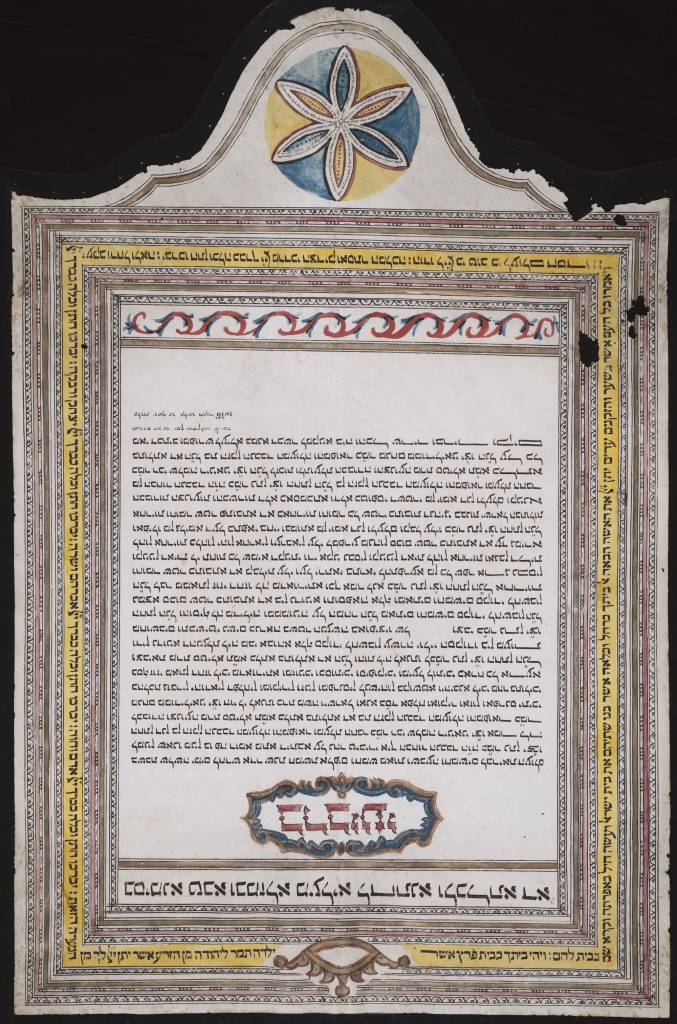 Ketubah : Rome, Italy, 1797, March 1. :
Bridegroom: Natan ben Shelomoh Rini’ani.
Bride: Stila bat Menahem mi-Modili’ani.
Witnesses: Avraham bar Yosef Toskano ; Shelomoh Yosef bar Eliyah mi-Kori.
Imperfect: decorative border mutilated; no loss of text.
Abstract:
Marriage contract, manuscript, ink and paint on vellum, dated 3rd of Adar 5557 at Roma (1797). The geometric ornamental borders on this ketubah differ from the more traditional floral designs found on most Italian ketubot of this period. The scalloped bottom is typical of ketubot from Rome. The Hebrew writing along the border is from the Book of Ruth followed by a series of blessings evoking the patriarchs and matriarchs, and Mordecai and Esther (surprisingly, since the two were not husband and wife). The day of the week of the wedding is written in red ink in a cartouche at the center of the document. The micrography on the lower rounded edge is of the seven blessings recited at the Jewish wedding ceremony. 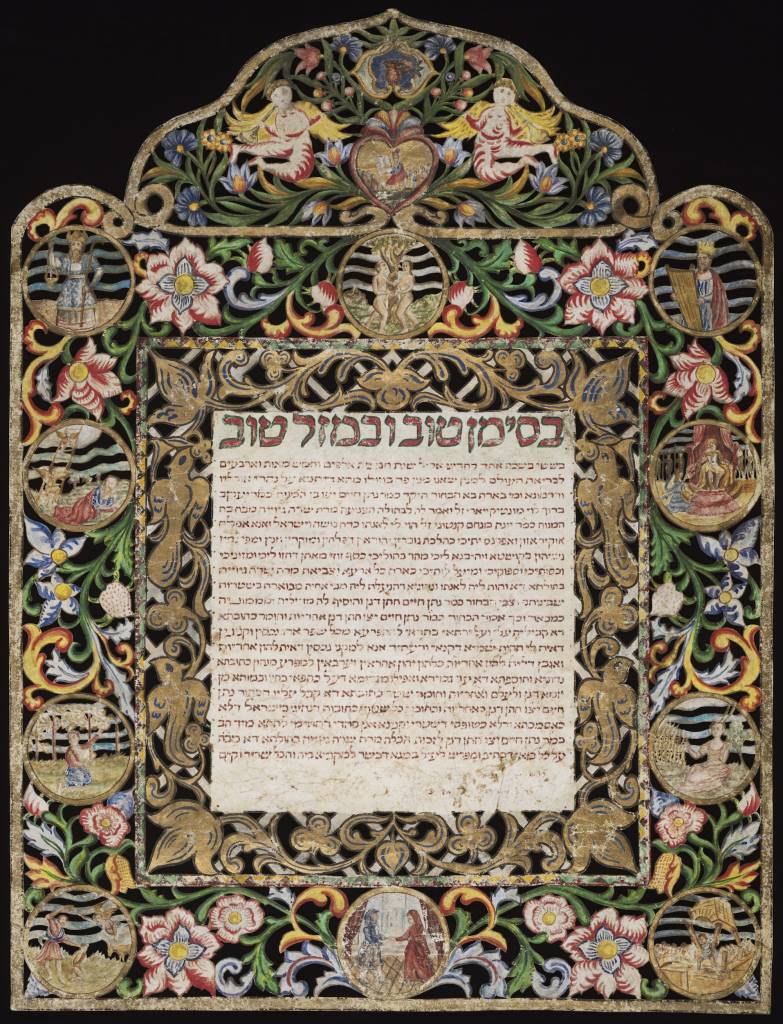 Ketubah : Bozzolo, Italy, 1780, September 1. Marriage contract, manuscript, ink and paint on vellum, dated the first of Elul, 5540 at Bozolo (1780). According to the scholar Shalom Sabar, this ketubah is the product of a workshop in either Ancona or Lugo. The bride�s family, Cantoni (also spelled Canton), was the dominant Jewish family of Bozzolo. The bridegroom�s family, whose coat-of-arms decorates the top border, commissioned the ketubah. The text is framed by an elaborately painted and cut-out border. The inner frame contains large birds perched on branches, while the exterior frame contains medallions with biblical and other figurative miniatures set in rich floral decoration. 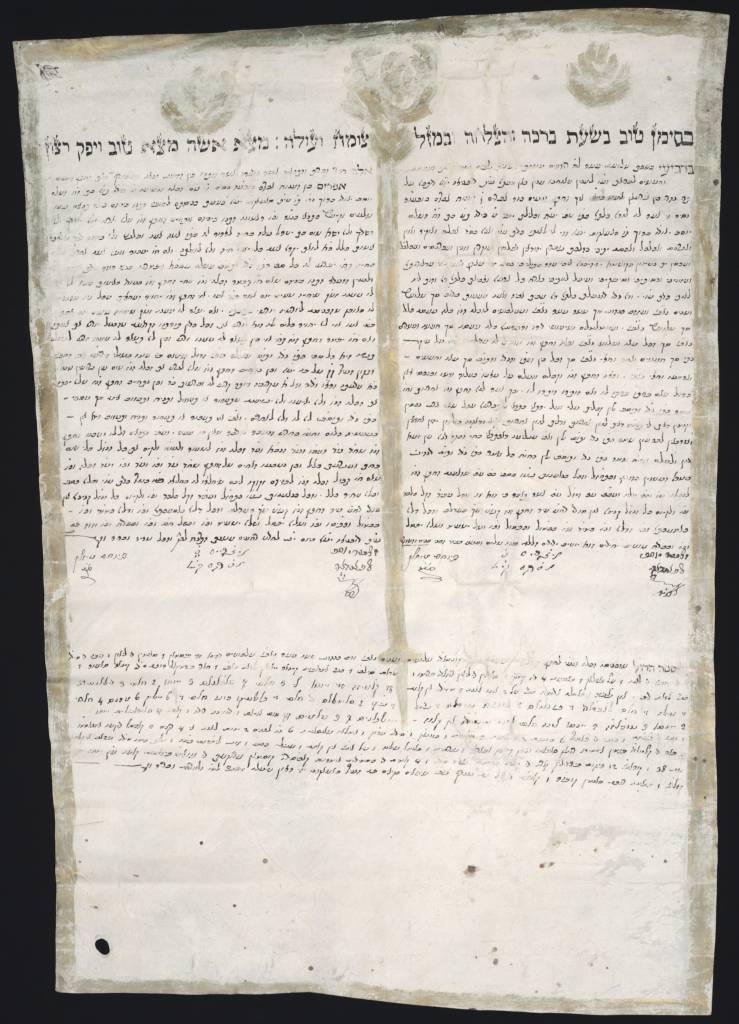 Ketubah : Dupnit’s’a, Bulgaria, 1798, June 27. Marriage contract, manuscript, ink and paint on vellum, dated 13th of Tamuz 5558 at Dupnitsah (1798). The text is in two columns, with a third section of text below. The right column contains the terms of the marriage (kidushin) and the left column, the terms of the betrothal (erushin). Both are signed by the same three witnesses. The bottom section contains text enumerating the dowry. 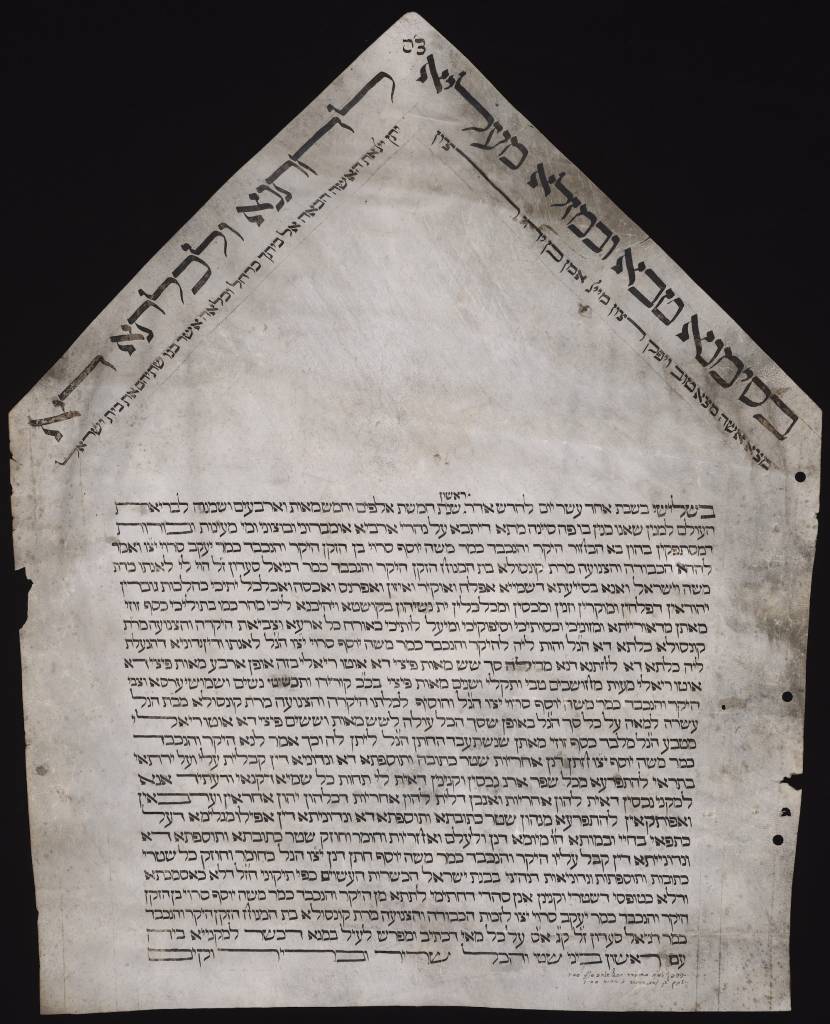 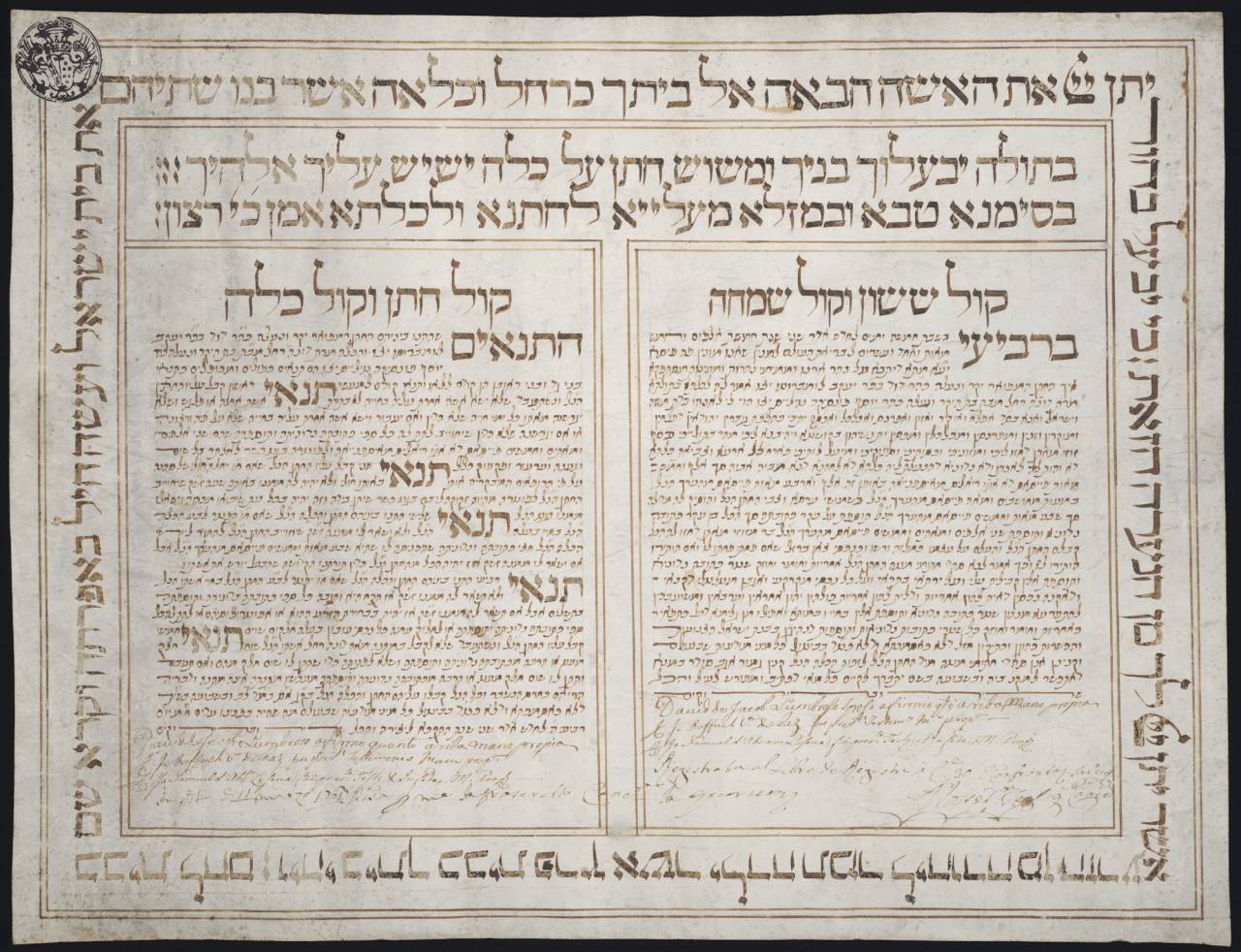 Ketubah : Pisa, Italy, 1761, March 11. Marriage contract, manuscript, ink on vellum, dated the fifth of Adar II 5521 (1761 March 11) at Pisa. Two sections of text containing the marriage contract and conditions (tena’im), surrounded by borders with calligraphed verses. The text of the outer border is from the end of the book of Ruth, consisting of the blessing that the elders give Boaz when he marries Ruth. 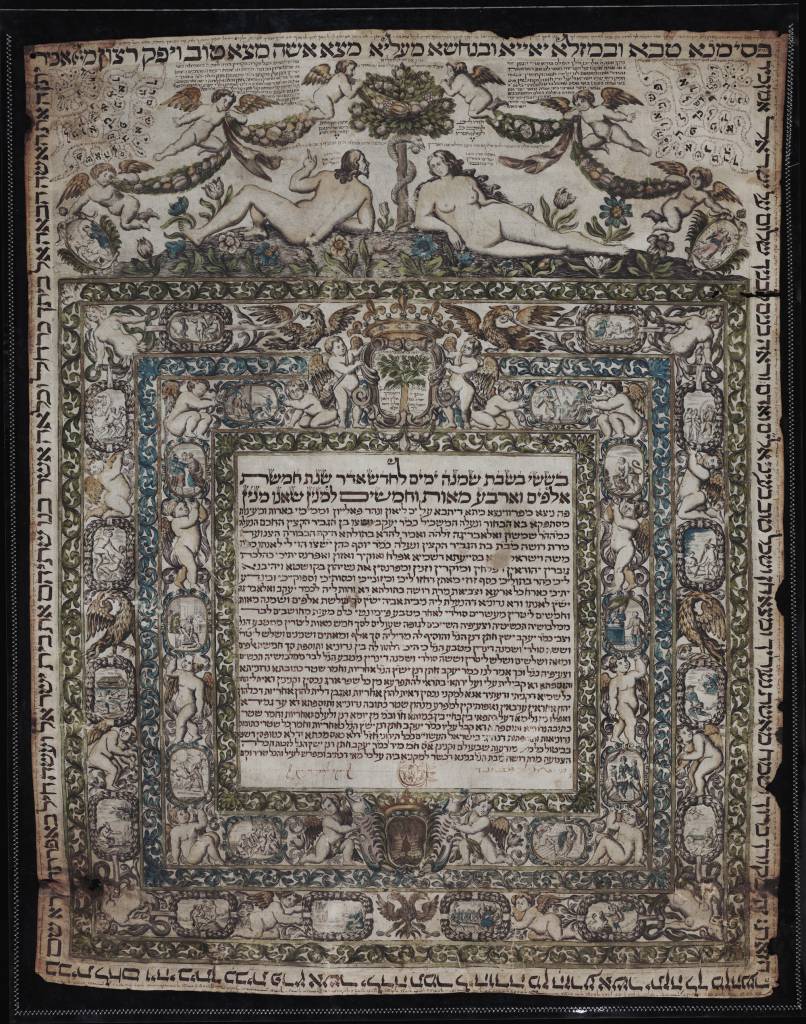 Ketubah : Nice, France, 1690, February 17. Marriage contract, manuscript, engraving, ink, and green and blue paint on vellum, dated 8th Adar 5450 at Nitsa (1690). The text is written in Italian block letters. The text is surrounded by two registers, which include cartouches in which biblical scenes are depicted. Immediately above the text is a cartouche above which is a crown. Within the cartouche is a representation of the tree of life, and the name of the groom and the priestly blessing are written in micrography …