Do you believe in freed speech and the freedom to think? In 1952, the Norfolk and Western Railway Precision Transportation Company took out large adverts in Business Week. 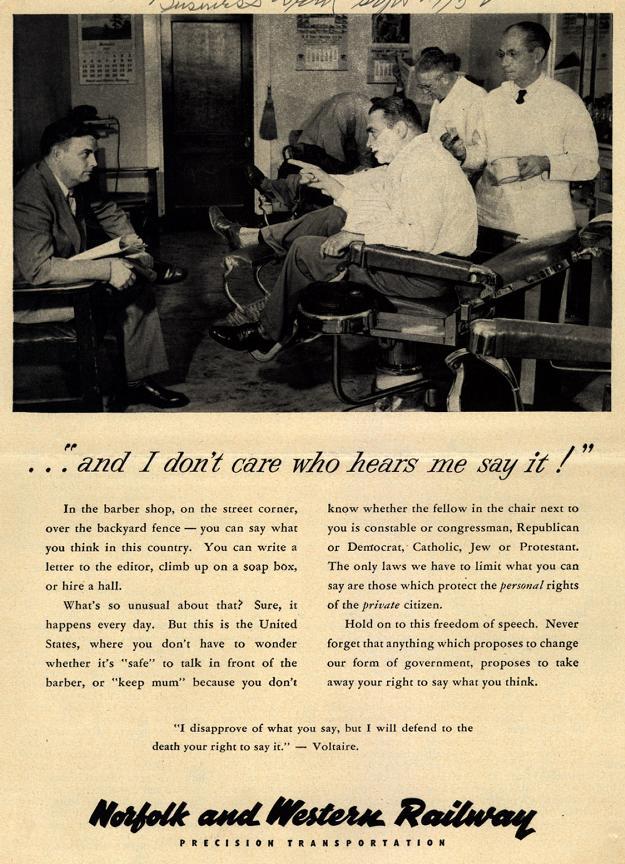 In the barber shop, on the street corner, over the backyard fence – you can say what you think in this country. You can write a letter to the editor, climb on a soap box or hire a hall. What’s so unusual about that? Sure, it happens every day. But this is the United States where you don’t have to wonder whether it’s “safe” to talk in front of the barber, or keep “mum” because you don’t know whether the fellow in the chair next to you is constable or congressman, Republican or Democrat, Catholic, Jew or Protestant. The only law we have to limit what you can say are are those which protect the personal rights of the private citizen. Hold on to this freedom of speech. Never forget that anything that proposes to change our form of government, proposes to take away your right to say what you think.

“I disapprove of what you say, but I will defend to the death your right to say it.”  – Voltaire

Powerful stuff. And it is bang on the money. Freedom of Speech – no ‘buts’ is a message as vital to support now as it ever has been.

The company’s next advert focuses on God and the power to worship. It supports the unity of Church and State – which is certainly not to everyone’s tastes. But it too speaks of freedom. 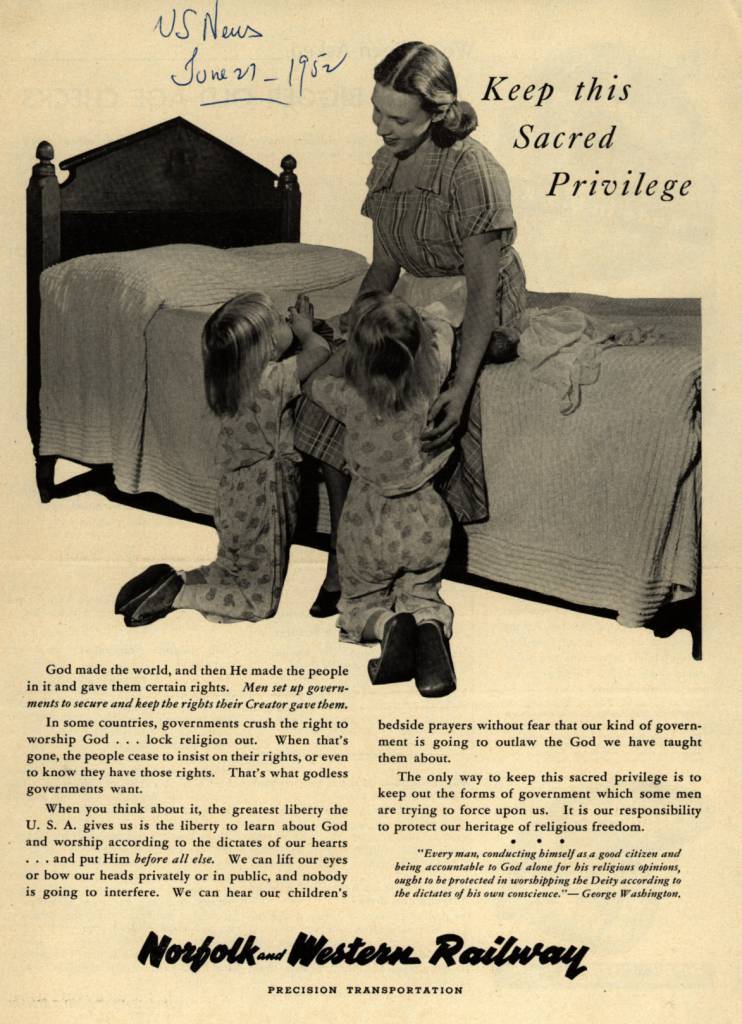 God made the world, and then He made the people in it and gave them certain rights. Men set up governments to secure and keep the right their Creator gave them. In some countries, Governments crush the right to worship God… lock religion out. When that’s gone the people cease to insist on their rights, or even to know they have those rights. That’s what godless government want. When you think about it, the greatest liberty the USA gives us is liberty to learn about God and worship according to the dictates of our hearts … and put Him before all else. We can lift our eyes or bow out heads privately or in public, and nobody is going to interfere. We can hear our children’s bedside prayers without fear that our kind government is going to outlaw the god we have taught them about.

The only way to keep this sacred privilege is to keep out the forms of government which some men are trying to force upon us. It is our responsibility to protect our heritage of religious freedom.

“Every man, conducting himself as a good citizen, and being accountable to God alone for his religious opinions, ought to be protected in worshipping the Deity according to the dictates of his own conscience.” – George Washington

Norfolk and Western Railway’s public relations department was all about championing freedom.