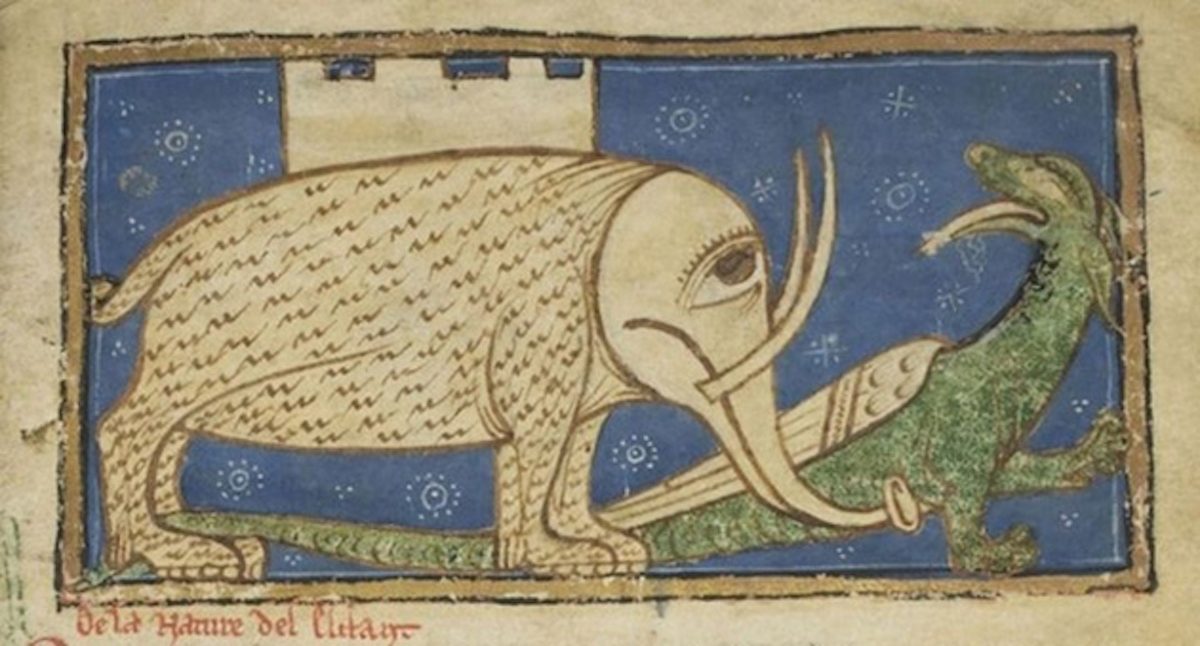 Imagine a four-legged beast with no knee joints that cannot lie down and has to sleep leaning against a tree. An animal with a long, skinny trumpet for a nose. A creature large enough that one can build small castles on its back. It lives for 300 years and is afraid of mice. Its mortal enemy is the dragon. It must “travel to the East, near Paradise, where the mandrake grows” when it comes time to mate. Now draw this thing.

What did you come up with? Chances are, if you actually undertook this exercise, you’d arrive at something resembling the Medieval conception of elephants, found in illustrated manuscripts across Europe. The artists had apparently never seen this creature, but it featured prominently in bestiaries, popular encyclopedias of animals that drew together the work of classical authors and medieval travelers to show how animals symbolize human and divine traits. 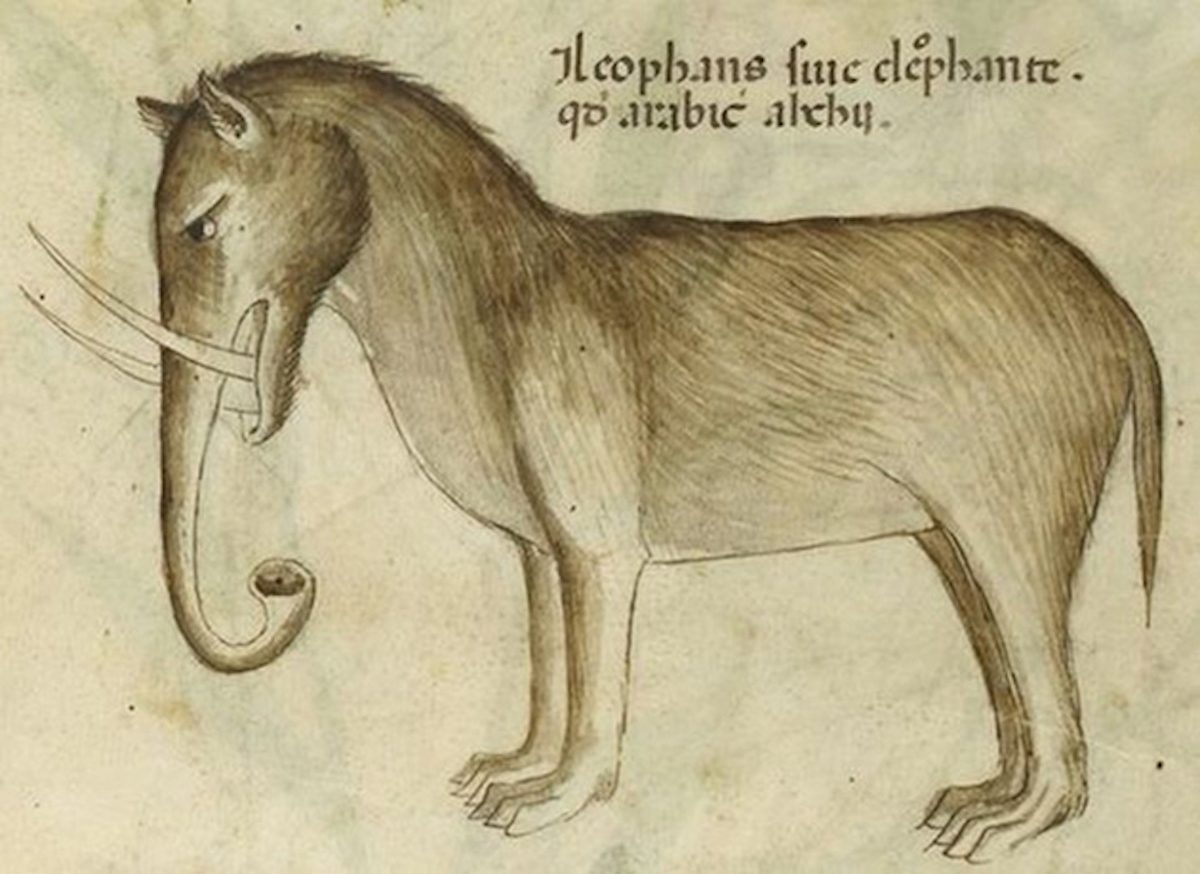 These illustrations are composites created from dozens of sources—from Julius Caesar and Pliny the Elder to notorious teller of tall tales, Sir John Mandeville. They are creatures of hearsay, “imaginary beings,” as Jorge Luis Borges would call them. Some have cloven hooves or claws and small, pointed ears. Some look more like horses or pigs than elephants. “Sometimes their trunk was so long it would drag on the ground,” writes Sarah Laskow at Atlas Obscura. “The trunks and the tusks were most often twisted into surprising shapes.”

Yet it isn’t true that all who drew the elephant in such strange ways had no idea what they actually looked like. Sassanid, Mongol, and Ottoman rulers brought elephants into battle in the middle ages. Charlemagne supposedly owned one, as did Henry III in the 13th century, though it died in 1257 “after drinking too much wine.” To suppose that every medieval artist who drew an odd portrait of an elephant did so purely out of ignorance is to mistake the purpose of medieval illustration (though it’s true, very few people had access to royal menageries). Trumpet-like trunks may have been a literal interpretation of the sound the animal was said to make, or they might have served a purely symbolic function. 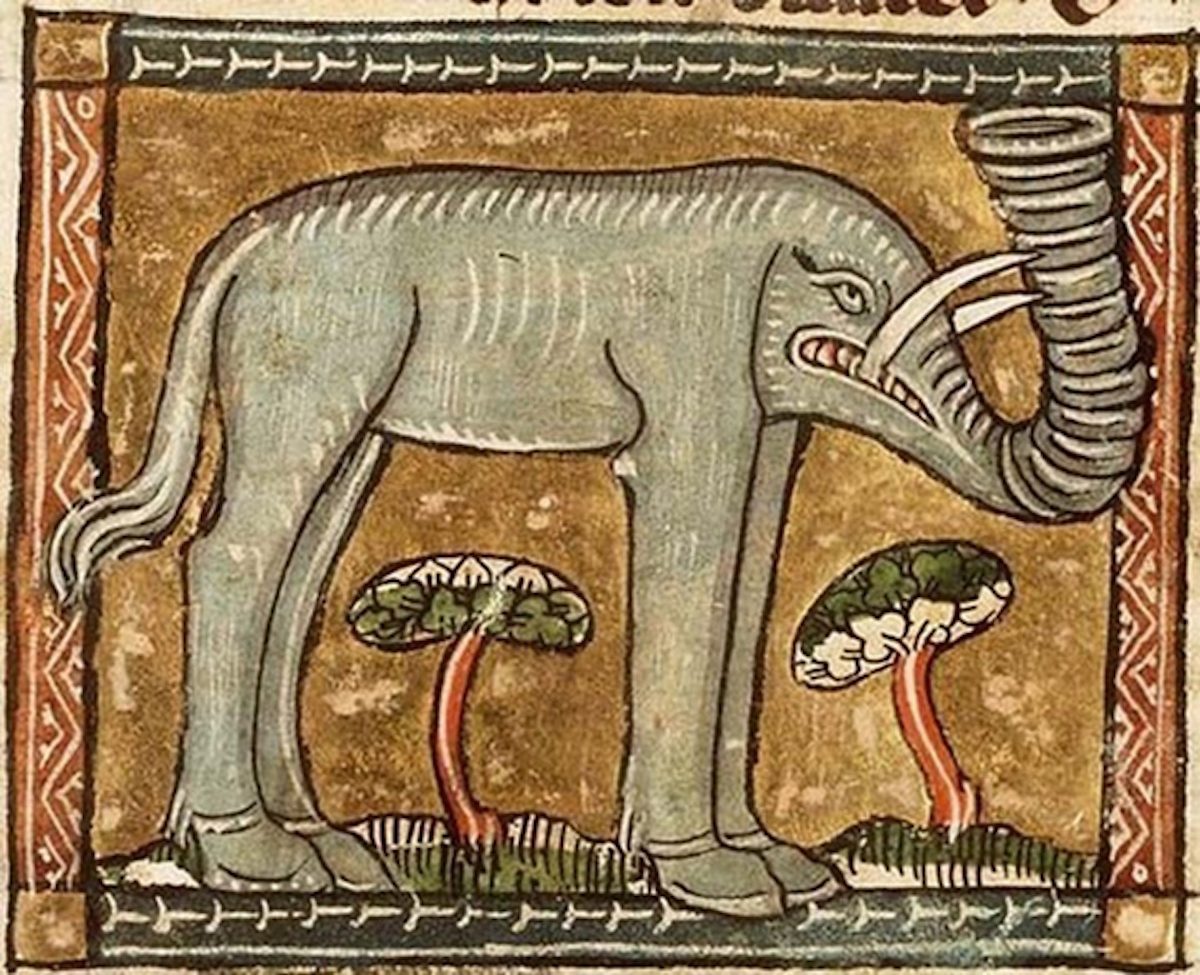 As in heraldry, so in bestiaries—creatures appeared as part of a story and manifested the features that best illustrated the traits they were supposed to embody. In her book Medieval Bestiaries: Text, Images, Ideology, University of Glasgow scholar Debra Strickland points this out:

There are very naturalistic renderings of elephants in some of the earliest English manuscripts, and very non naturalistic examples in some of the later ones. The degree of naturalism found in a given image must have been the result of the artist’s decision, even in the wake of direct observation of a live specimen … In the bestiaries, fidelity to living creatures was not necessarily the artist’s goal.

In other words, people in the middle ages “were not as gullible as us modern, post-Renaissance people would like to believe,” Laskow writes. “The bestiaries’ audience understood these were didactic stories” that used fanciful images to get across serious moral lessons. Natural history was subordinate to the biblical variety, morality more important than accuracy, and if physical descriptions had to be altered so as to get a point across, so be it. 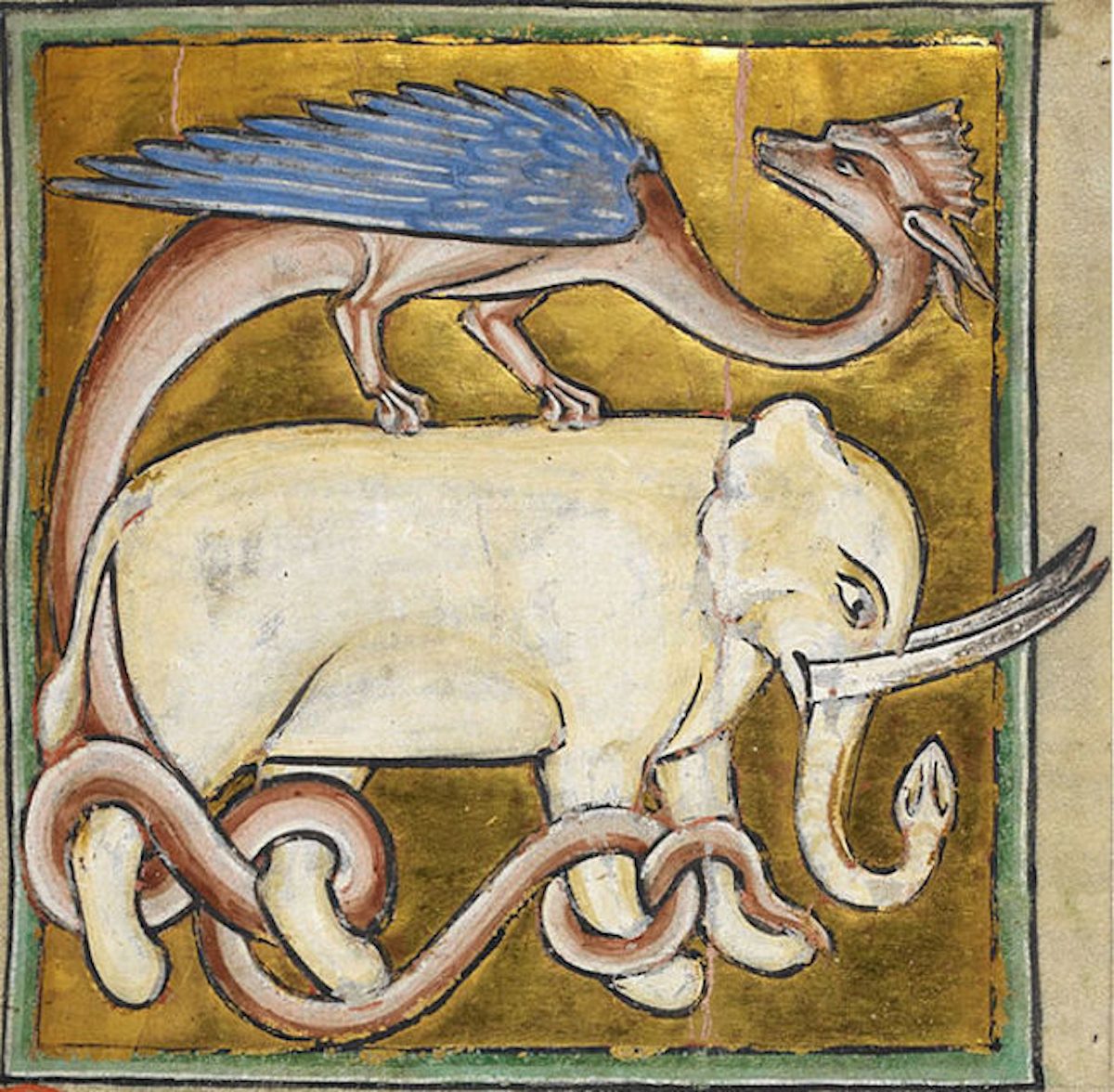 So what was the point of the medieval elephant? In many books, elephants were “cast in the role of Adam and Eve,” points out the Getty’s blog, reenacting “the first sin and subsequent ejection from Eden…. To a medieval reader, this would have served as a reminder to engage in religious devotion.”

Along with its unwavering devotion to its partner and its obedience to God, the elephant embodied general goodness toward man and animal alike. Its kindness is emphasized in stories of offering assistance to lost strangers and taking care to be gentle when in the presence of more vulnerable creatures. Even without a depiction or biblical parallel, the meaning of this story is clear: there is inherent value in respect and benevolence.

These are lovely sentiments. But what about the battlements? Sometimes referred to as howdah, the towers and castles on elephants’ backs likely did reflect more naturalist ideas about the creatures’ size and historical use on the battlefield. But the “big elephant,” notes an online bestiary, also “represents the law, which could not raise up mankind from sin.” The incorporation of more familiar domestic animals’ features in drawings of elephants might betray ignorance, or a general lack of interest in realism. The elephant, like the pig, the dog, the horse, or the griffon, existed, in the medieval mind, for one purpose only—to explain the ways of God, man, and the Devil. 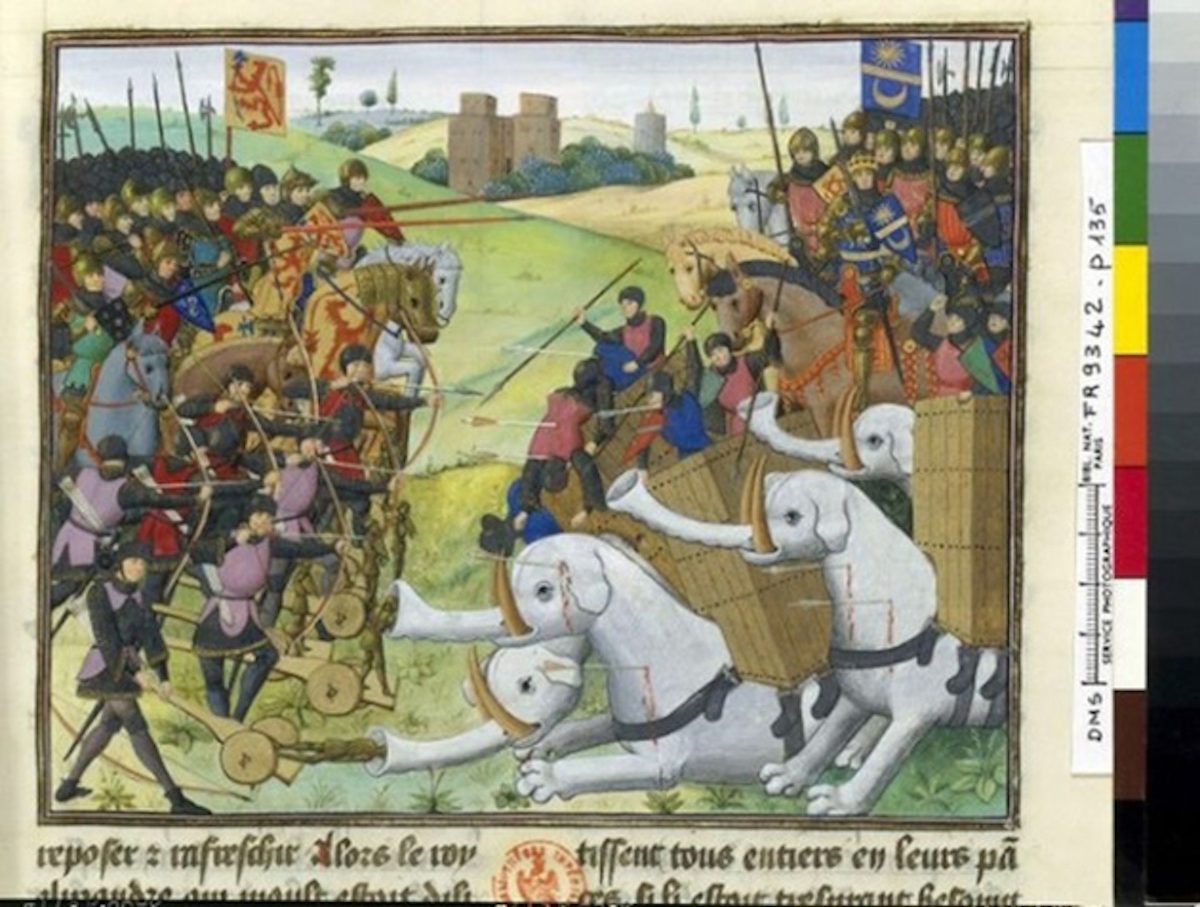 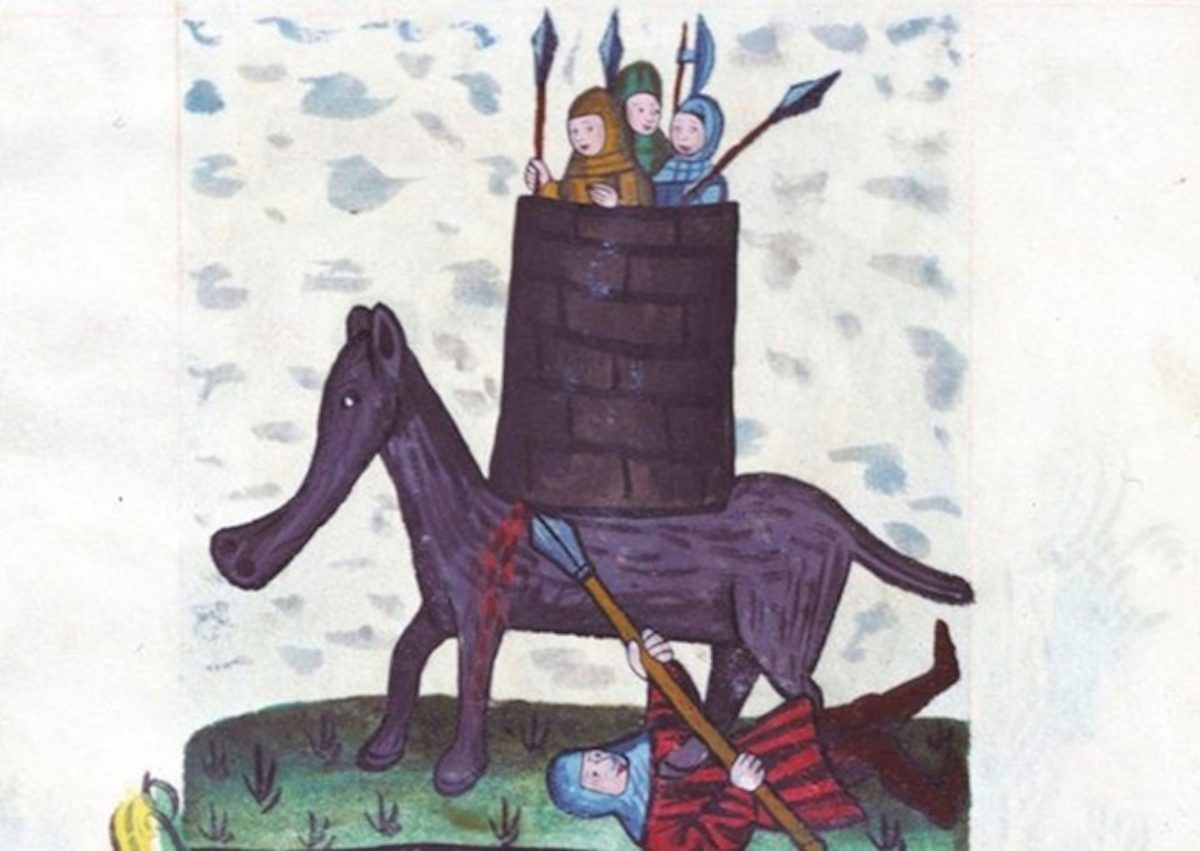 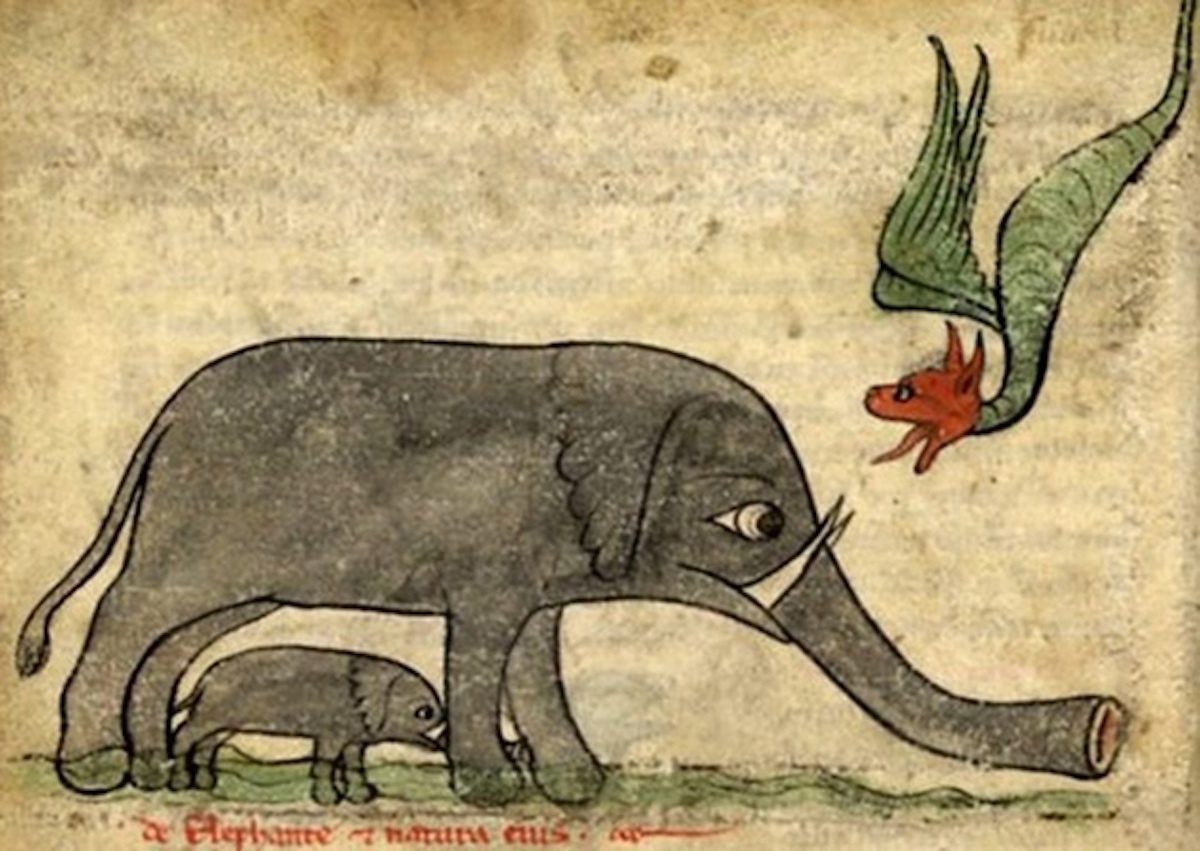 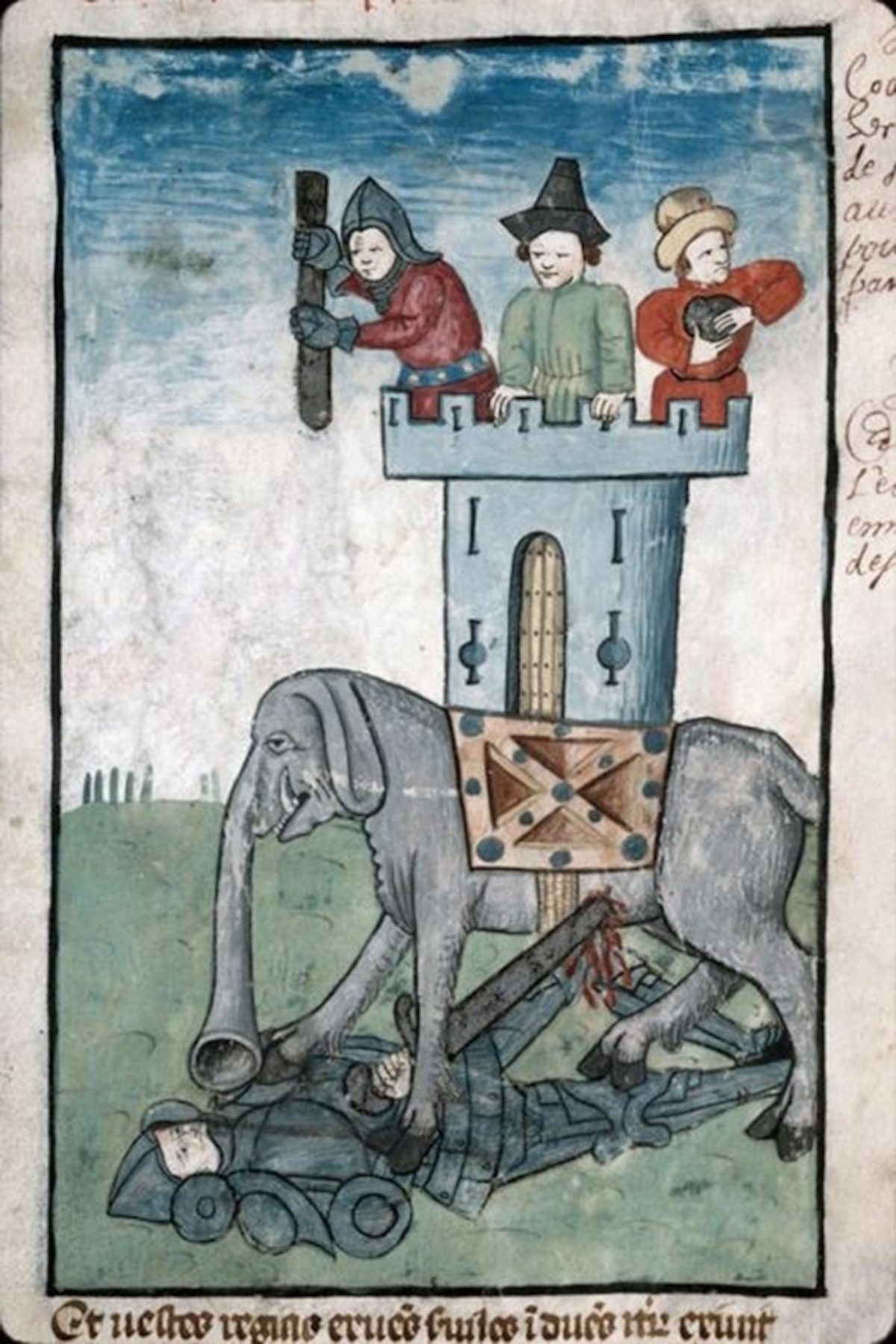 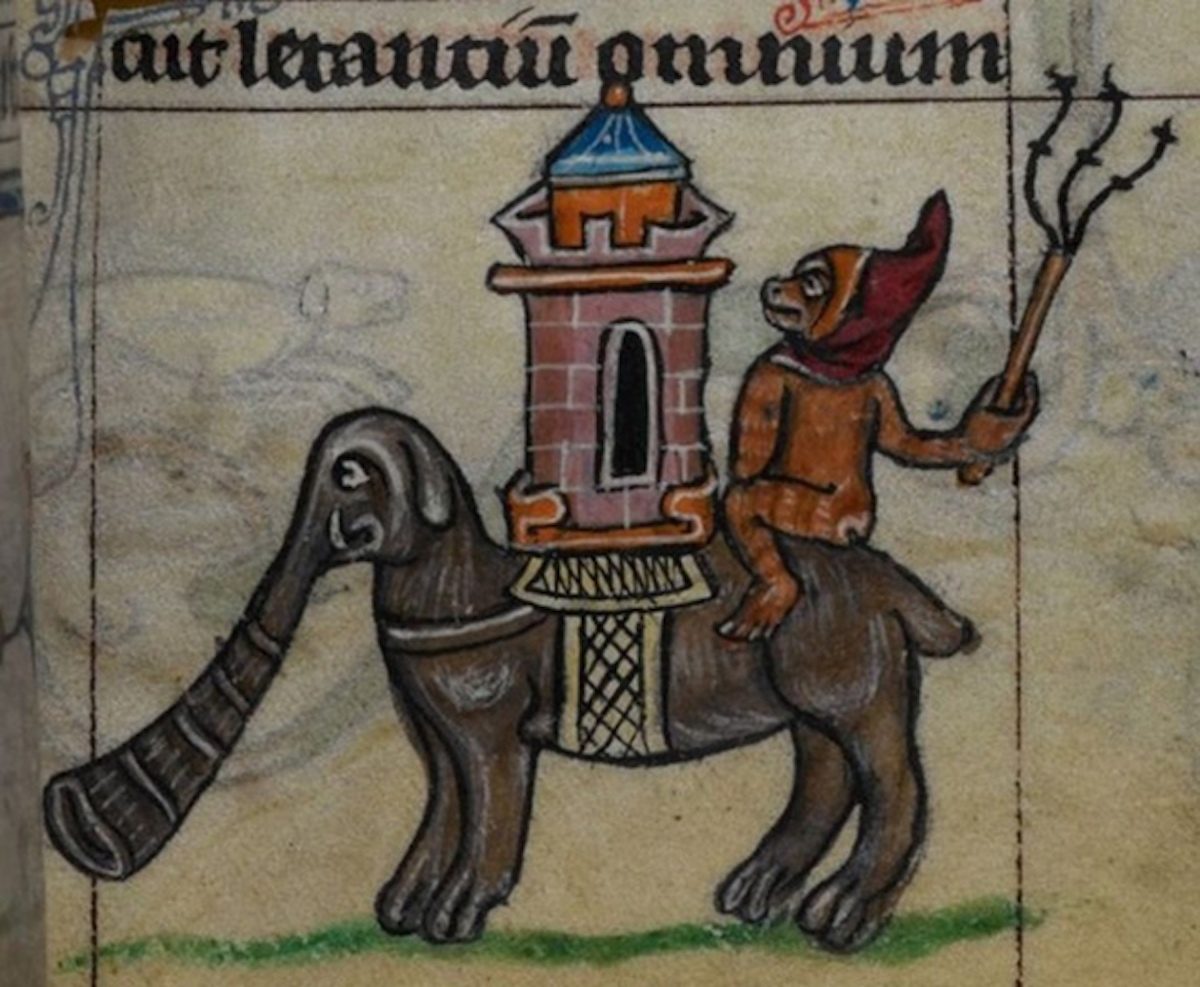 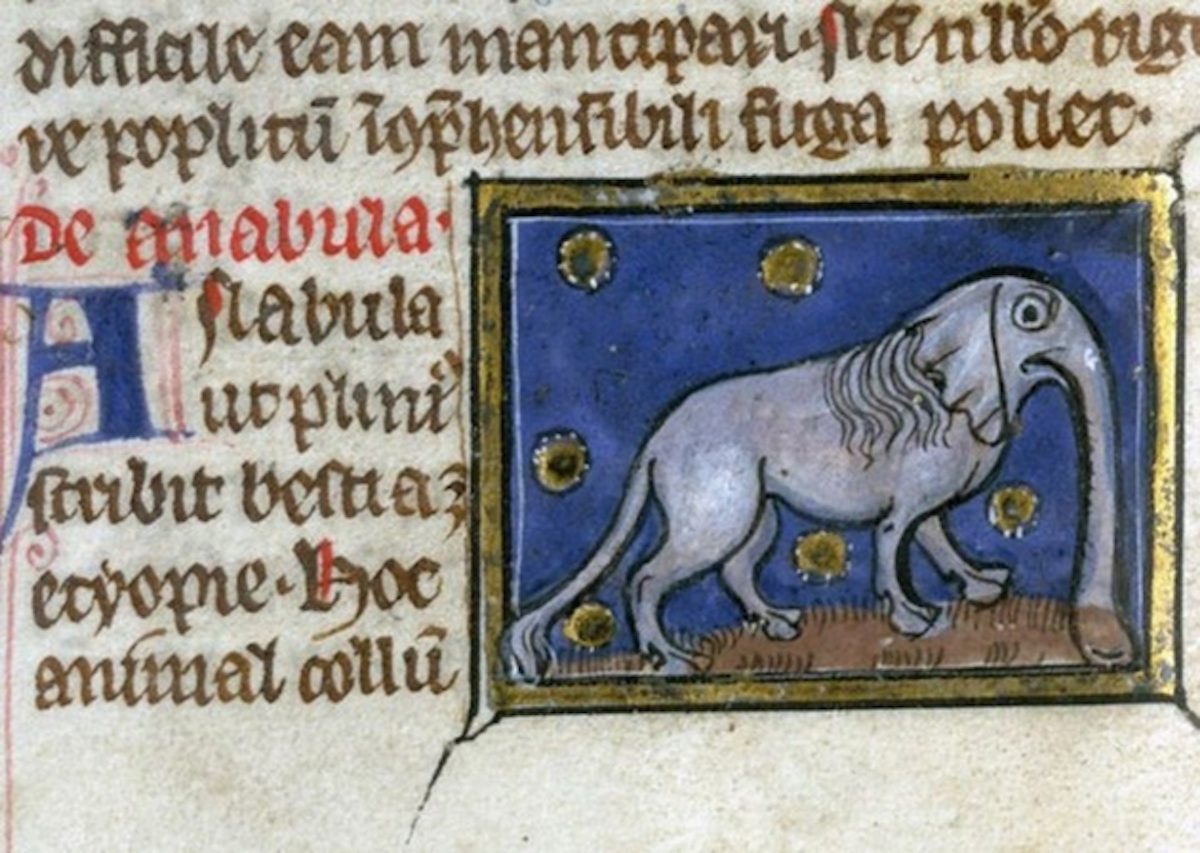 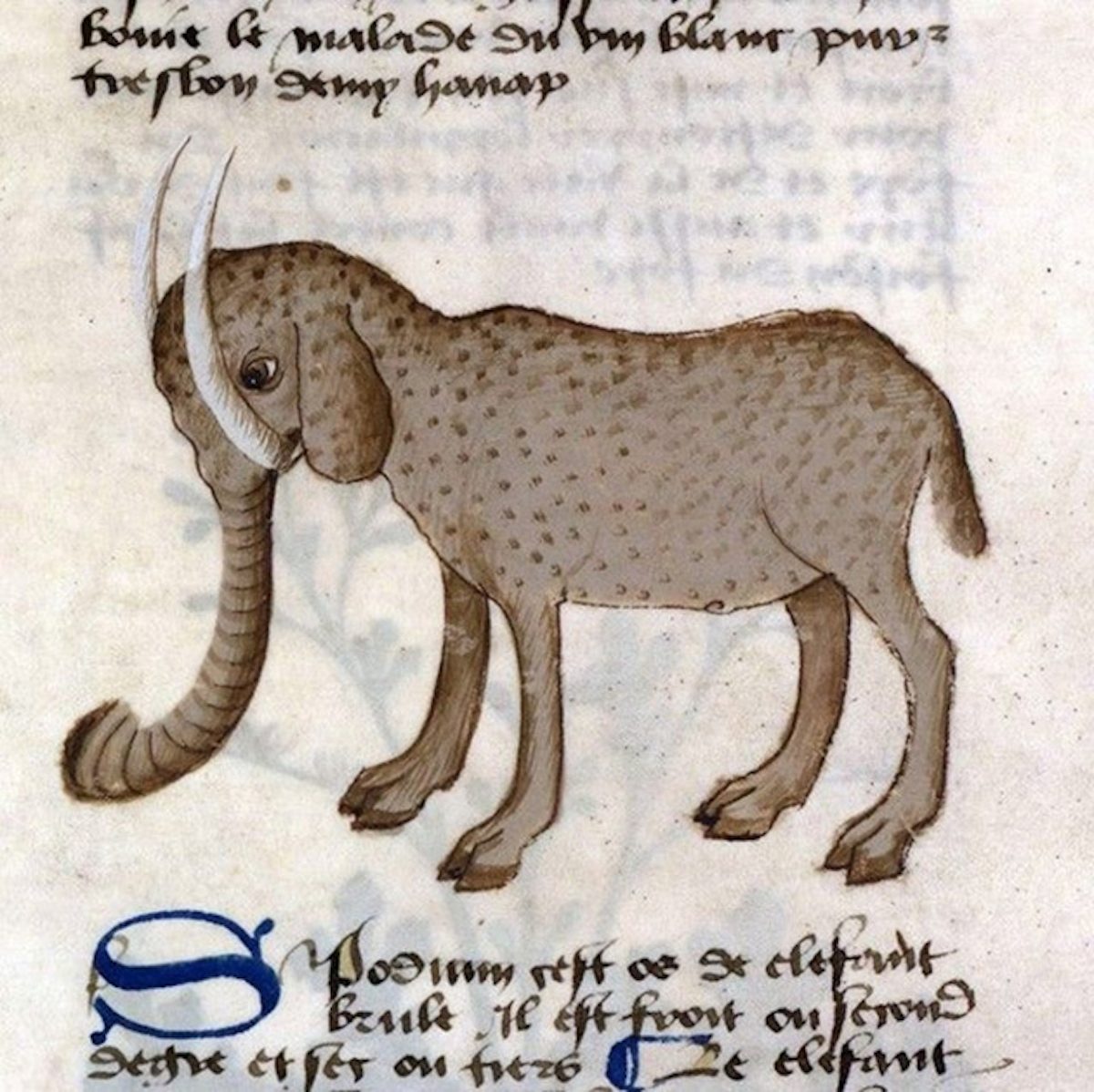 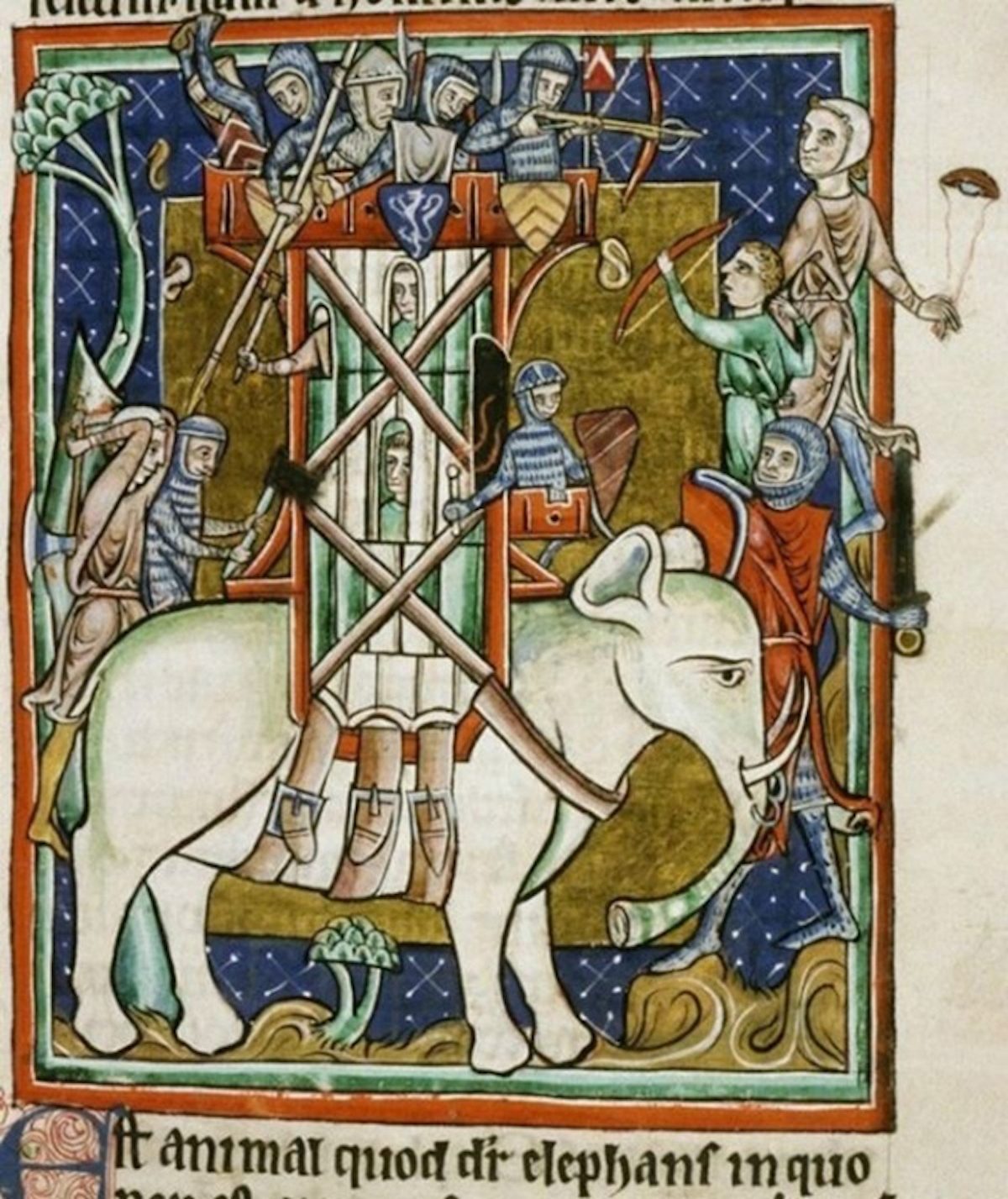 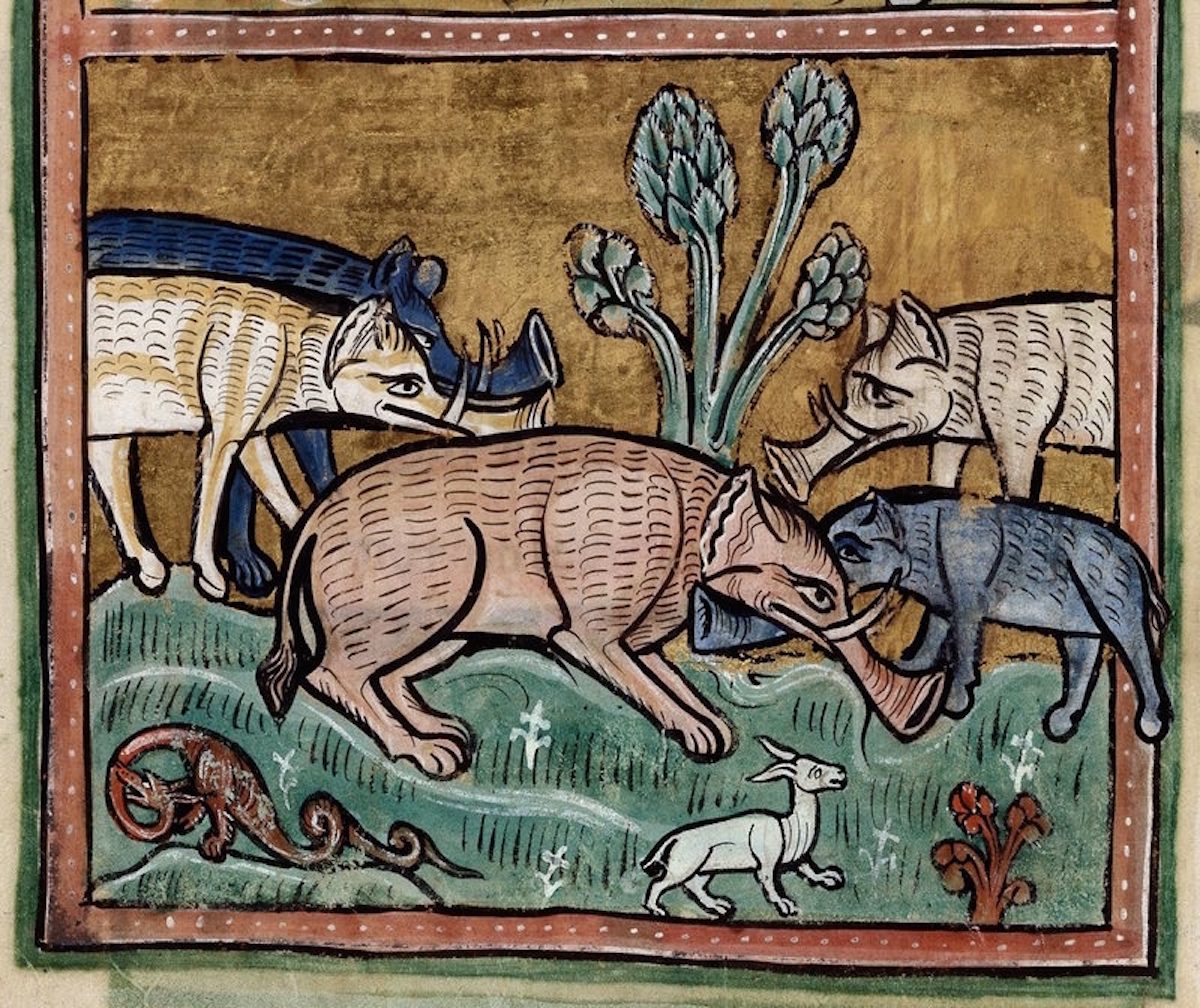 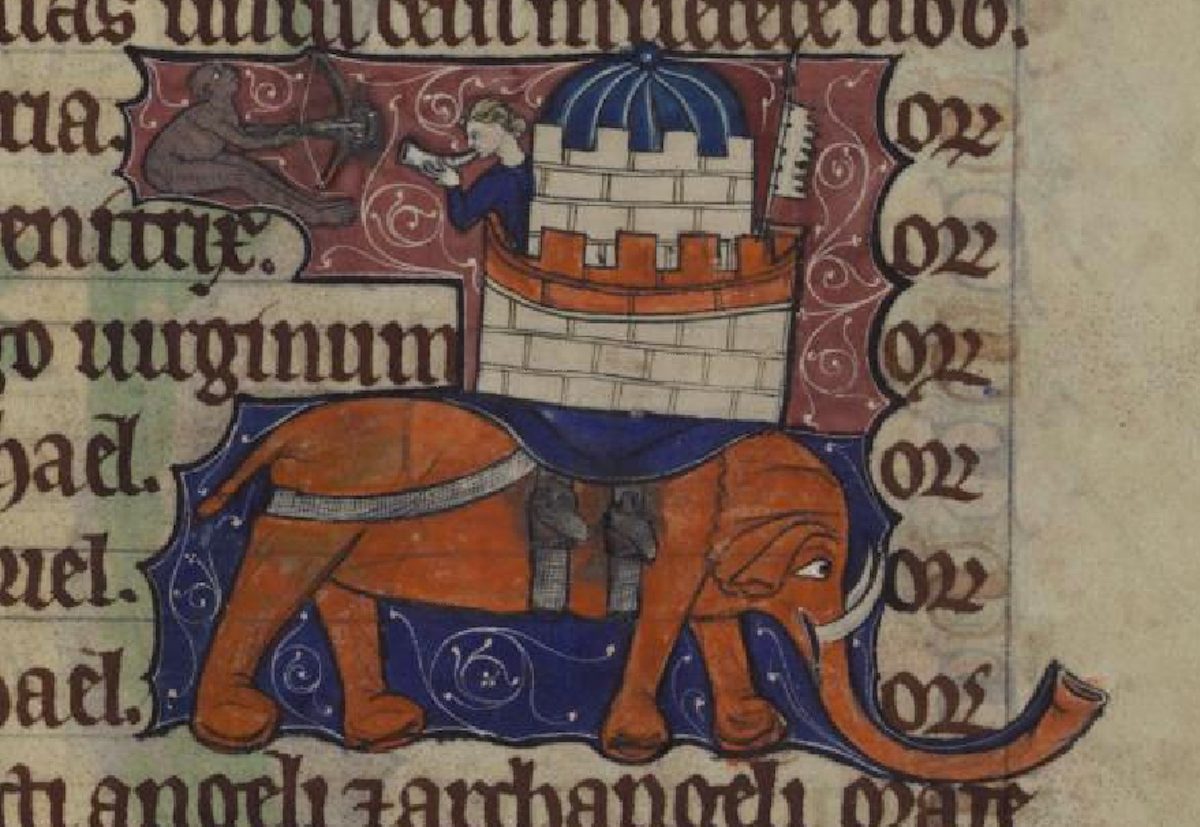 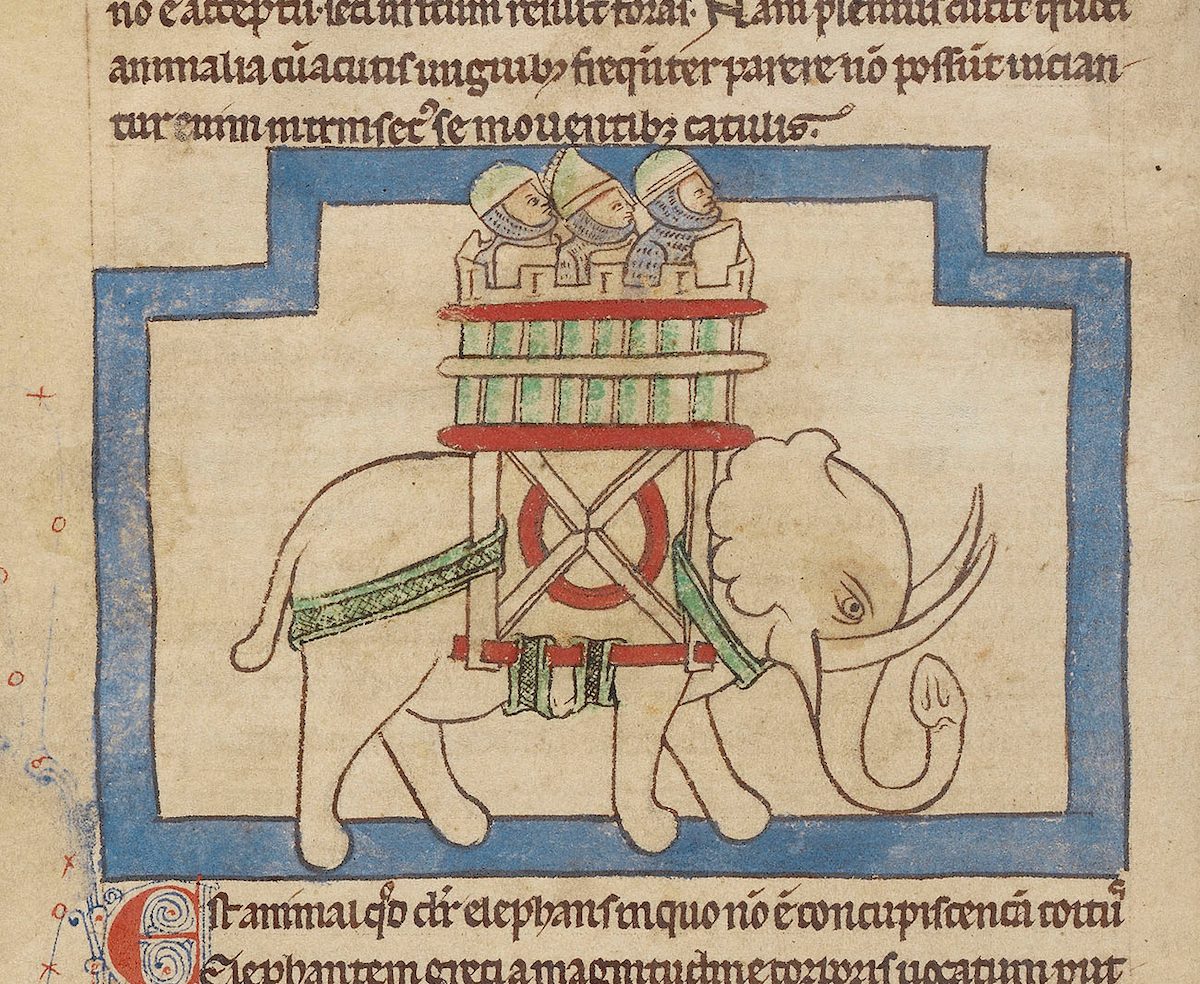 Sleeping With the Devil – Medieval Illuminations of Demonic Sex 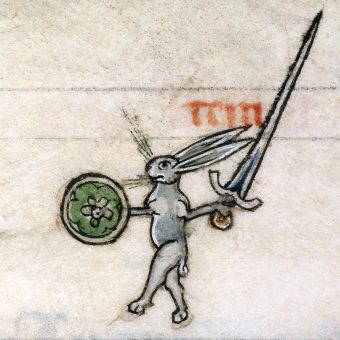