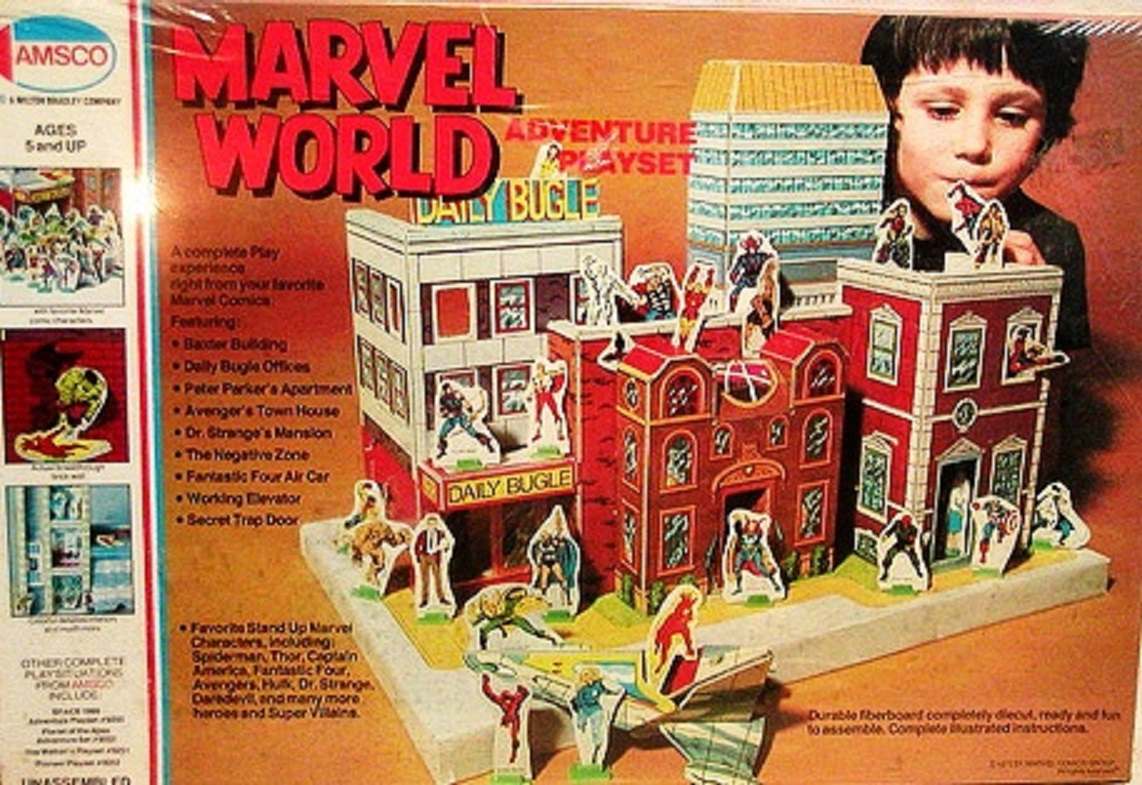 With companies like Mego, Ideal, and Amsco in the game, the disco decade was a great era to be a kid, and especially one who for fans of superheroes.

In particular this was the golden era of large superhero playsets, impressive toys that — while often made of laminated cardboard — nonetheless provided hours (if not months…) of fun and entertainment.

Here’s a look at some of the great playsets of the era. 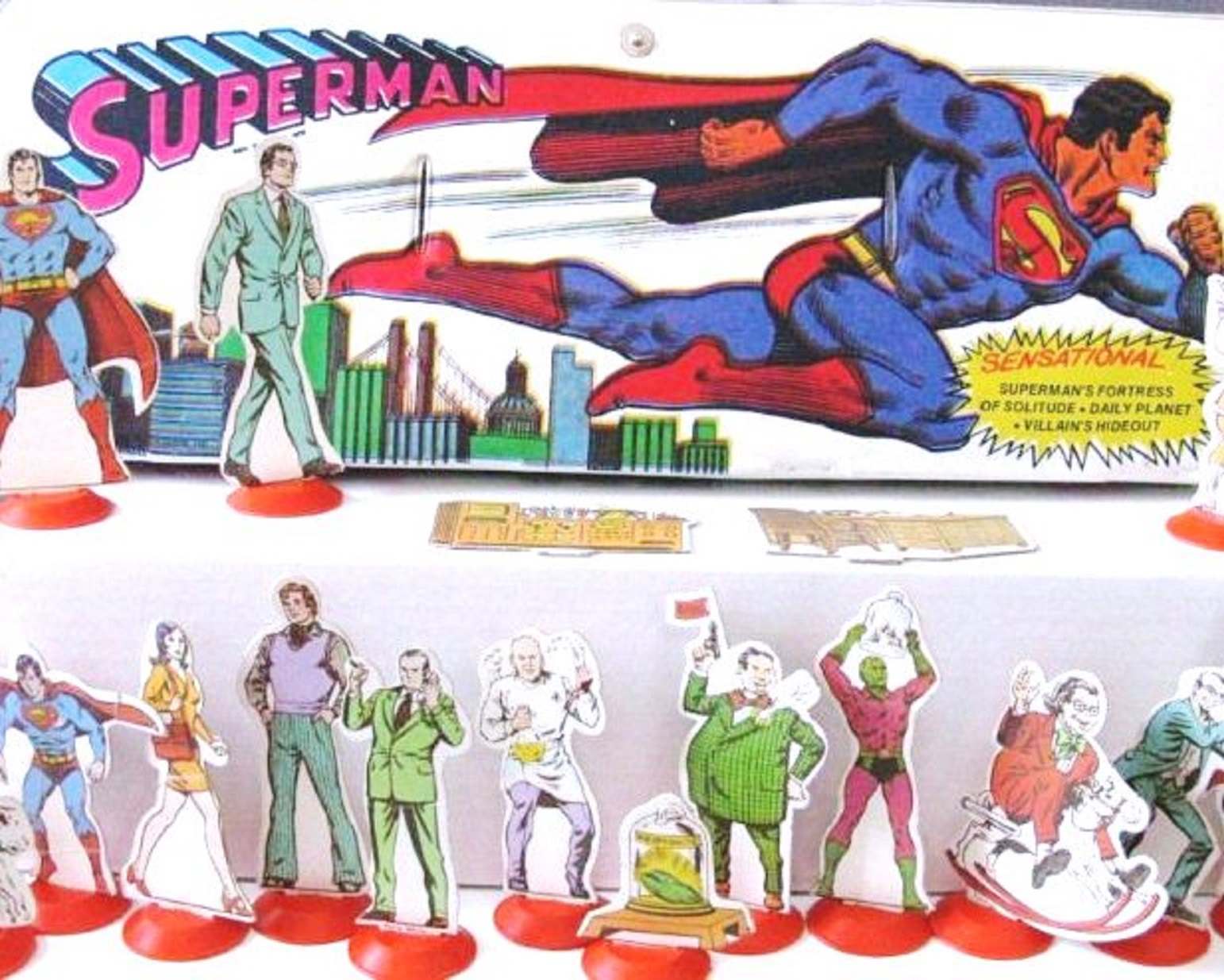 These sensational Superman and Amazing Spider-Man sets from Ideal are made of sturdy vinyl and each reveals three back drops for cardboard figures on stands. 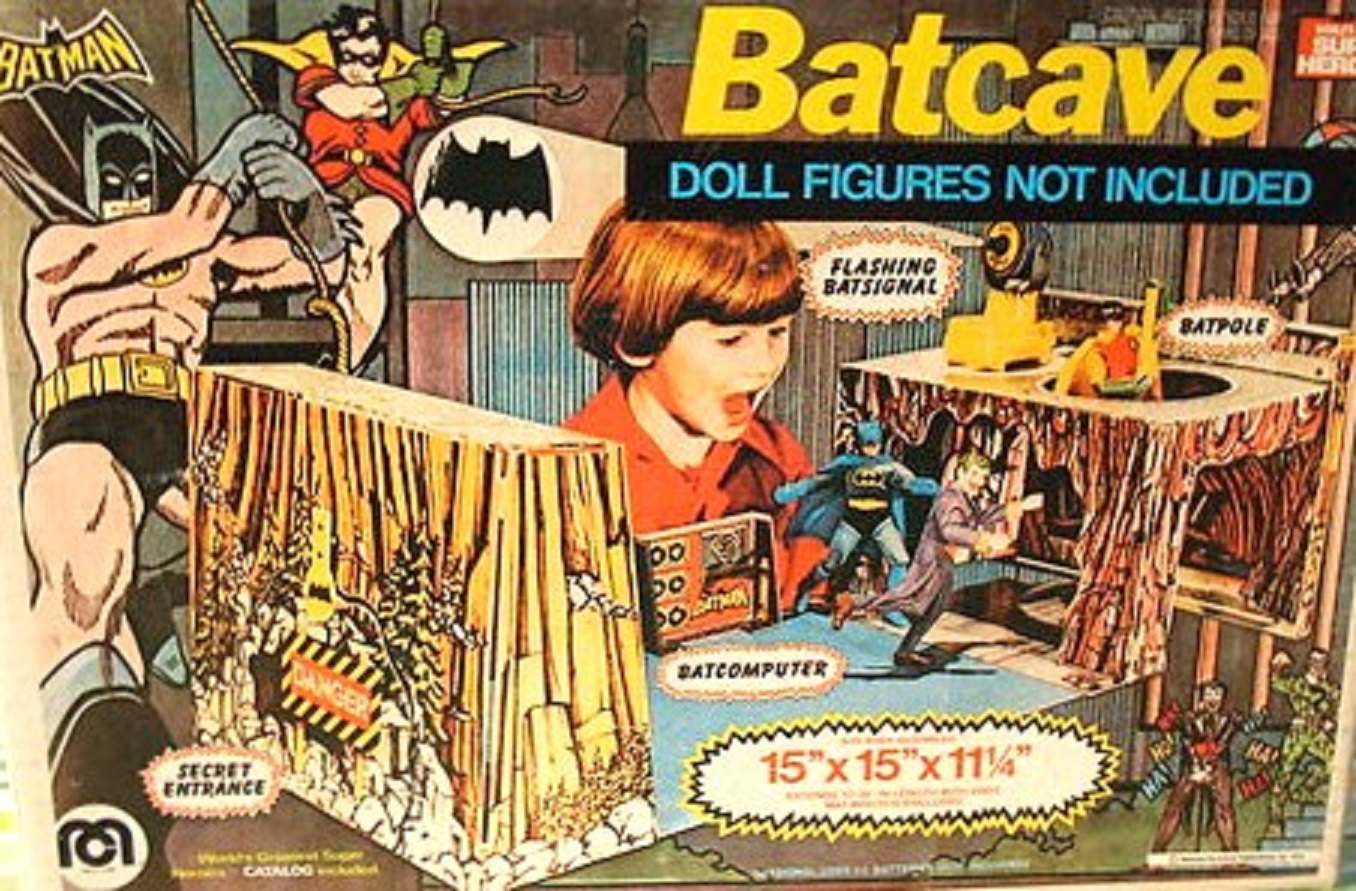 A classic toy that every child of my generation must have owned at one point or another. Here’s how the box described this amazing headquarters for the Caped Crusader: “an all-encompassing play case built to accommodate all the bat vehicles.  There is a secret entrance way for the Batmobile, a landing platform for the Batcopter, and a garage area for the Batcycle.  Included in the case are the Batpole and Batcomputer.  Everything necessary to stimulate your child’s imagination towards bold new adventures.” 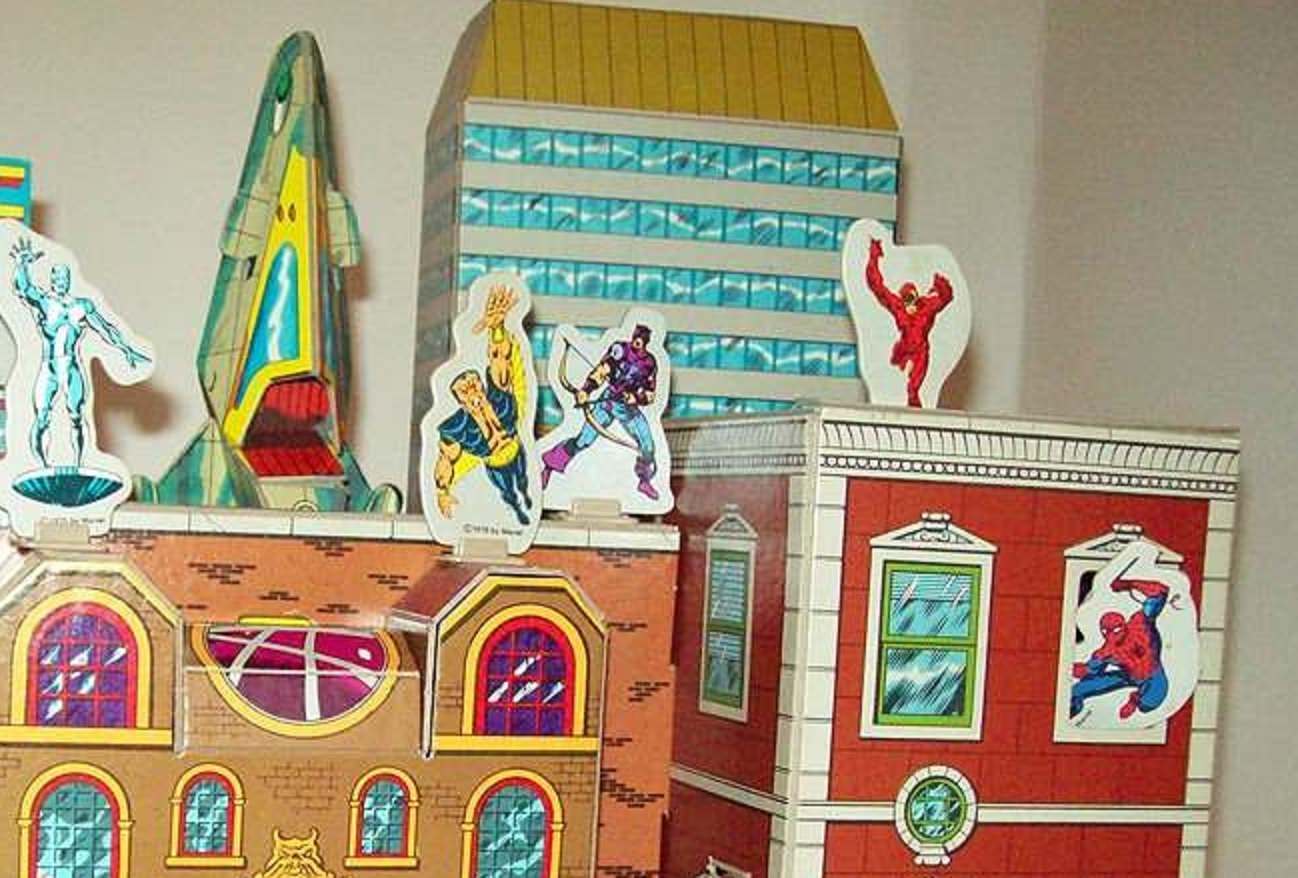 Amsco manufactured Planet of the Apes and Space: 1999 cardboard playsets in the 1970s too, but one of the most valuable such sets today is the Marvel World Playset, a “complete play experience right from your favorite Marvel Comics.”

The Playset is a giant diorama of a Manhattan City block, featuring Peter Parker’s apartment, the Daily Bugle office, the Avenger’s Townhouse, Dr. Strange’s Mansion, and the Baxter Building from the Fantastic Four.

Cardboard characters included are: The Silver Surfer, Aunt May, Spider-Man, Thor, Captain America, the Incredible Hulk, The Fantastic Four, The Red Skull, Daredevil, The Lizard, the Green Goblin and Dr. Strange. One side of these cardboard figures reveals the hero (like Cap, or Spidey) while the other reveals the secret identity (Rogers, or Parker). 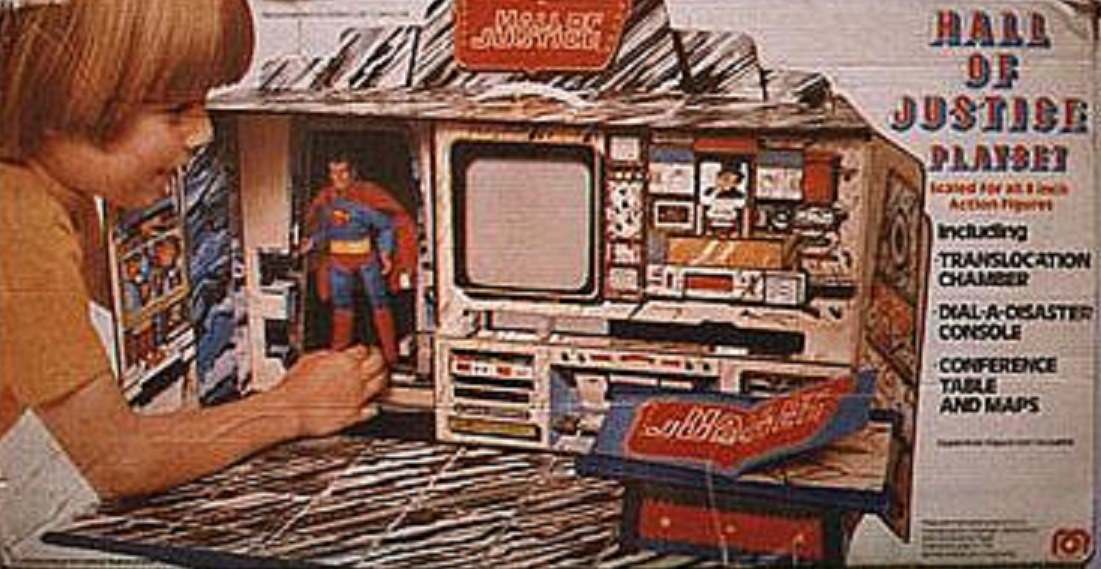 Your Mego Justice League figures could assemble here (sorry, Avengers…), and solve the world’s crises around a large conference table.

This set features a unique “Translocation Chamber” for beaming Batman, Superman, Aquaman or Wonder Woman to the scene of some disaster. “Bring action figures to the scene of the crime!” the box promised. 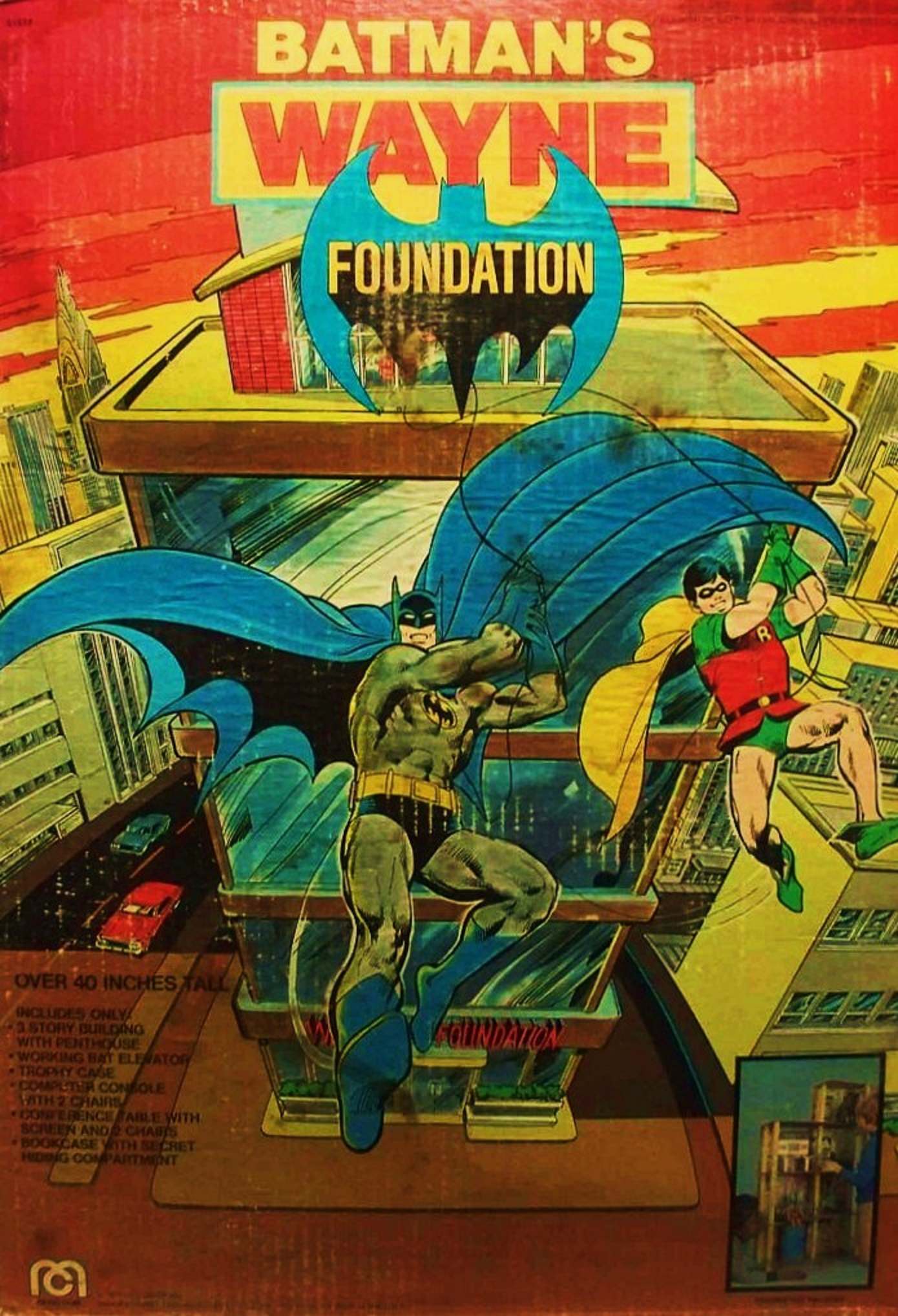 This four-floor colossus from Mego features a working elevator, secret compartments, room to park the BatCycle, and much more.

This toy is the Batman equivalent of Barbie’s famous townhouse, perhaps, and beautifully-detailed to boot.  It features seven good-sized rooms (supported by yellow pillars), a blue Bat Computer, a landing pad for the Batcopter, and a blue conference table and other furniture.

I always wish I had this crown jewel in the Mego playset collection, but never was fortunate enough to have one. 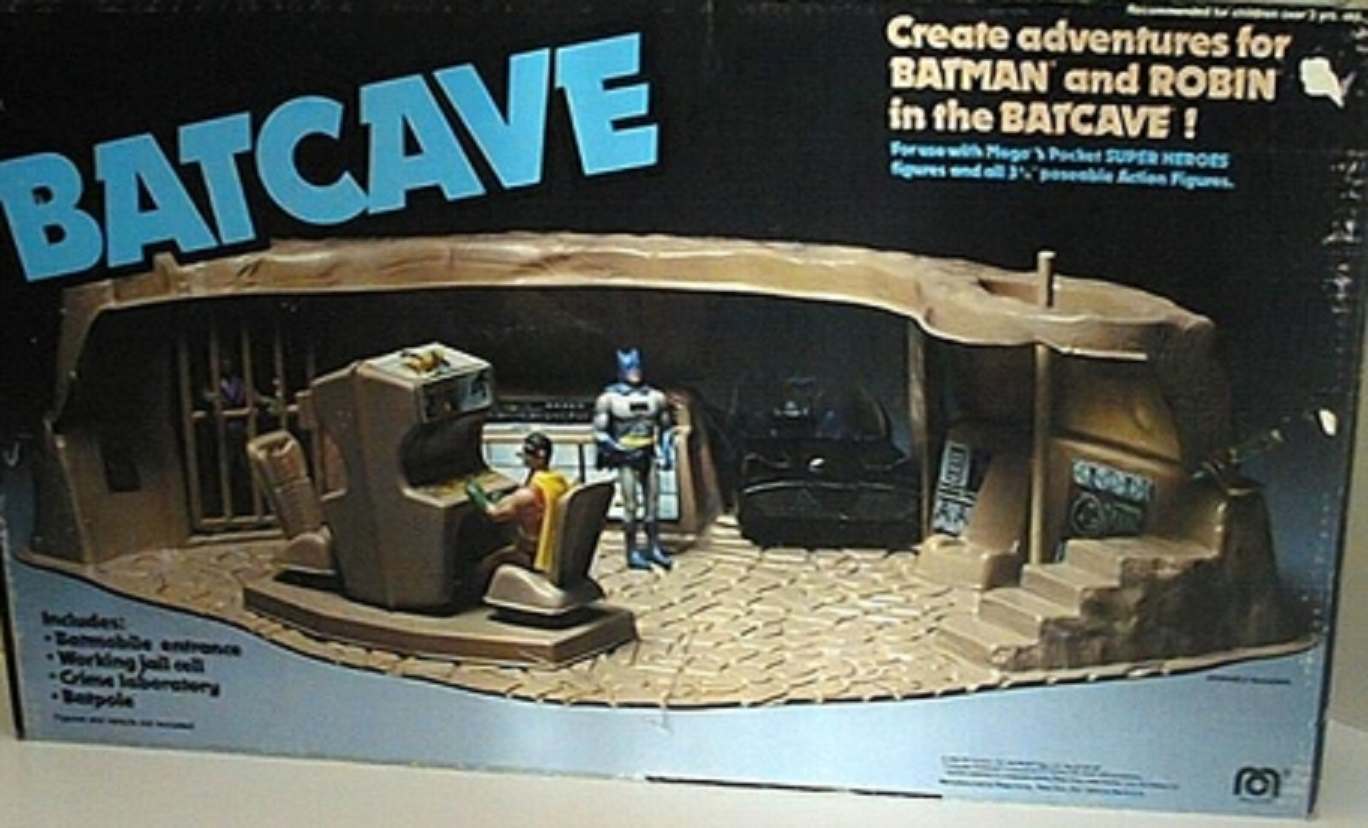 One of the last superhero playsets of the 1970s is this Mego Batcave, which looks a lot like a redressed version of Mego’s Star Trek: The Motion Picture Enterprise Bridge playset.

By this point in toy history, Kenner had changed the game with the small, 3 inch Star Wars figures, and so Mego followed suit, creating a set of smaller superhero action — of ‘pocket’ — figures, vehicles and playsets.