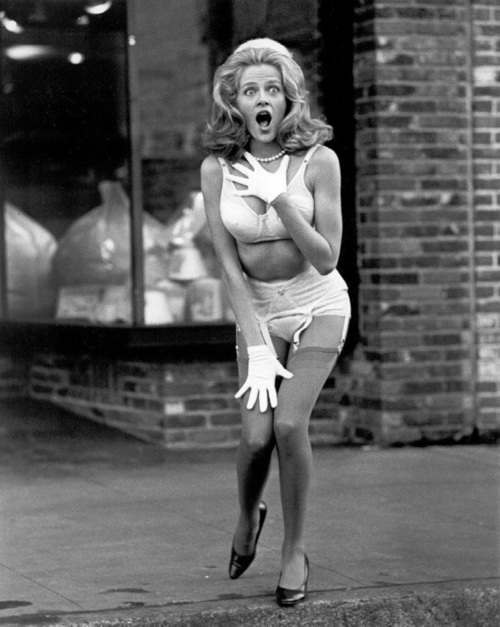 We could go through the great dramatic moments in the history of cinema, or list the best cinematography or musical scores (yawn)…. but that’s all been done before. Instead, let’s get a little low-brow and take a look at great moments in having a female’s clothes unexpectedly yanked off on television and film.

Yes, it’s a little bit cheesy and slightly pervy, but it’s a time honored tradition. If it makes you feel better, consider this a “scholarly expedition through the annals of visual media”. We can even call it something else, if you like – how about “A Survey of Unanticipated Garment Displacement In Popular Media: A Historico-Cultural Analysis”.

Only in the 70s did Johnny Carson get this risqué. In this skit, Johnny makes fun of the popular “laundry test” commercials of the day. He offers her fifty dollars for a towel to perform a test with his cleaning product. Then, quite unexpectedly, Johnny literally rips off her clothes and chases after her like a mad rapist. (Insert audience laughter)

Basically, the entire premise of Zapped! was unexpected clothes removal hijinks. In the end, Heather Thomas (The Fall Guy) gets shamed by a super powered Scott Baio. Eventually, the entire dance turns into something out of Carrie, but with boobs instead of blood. 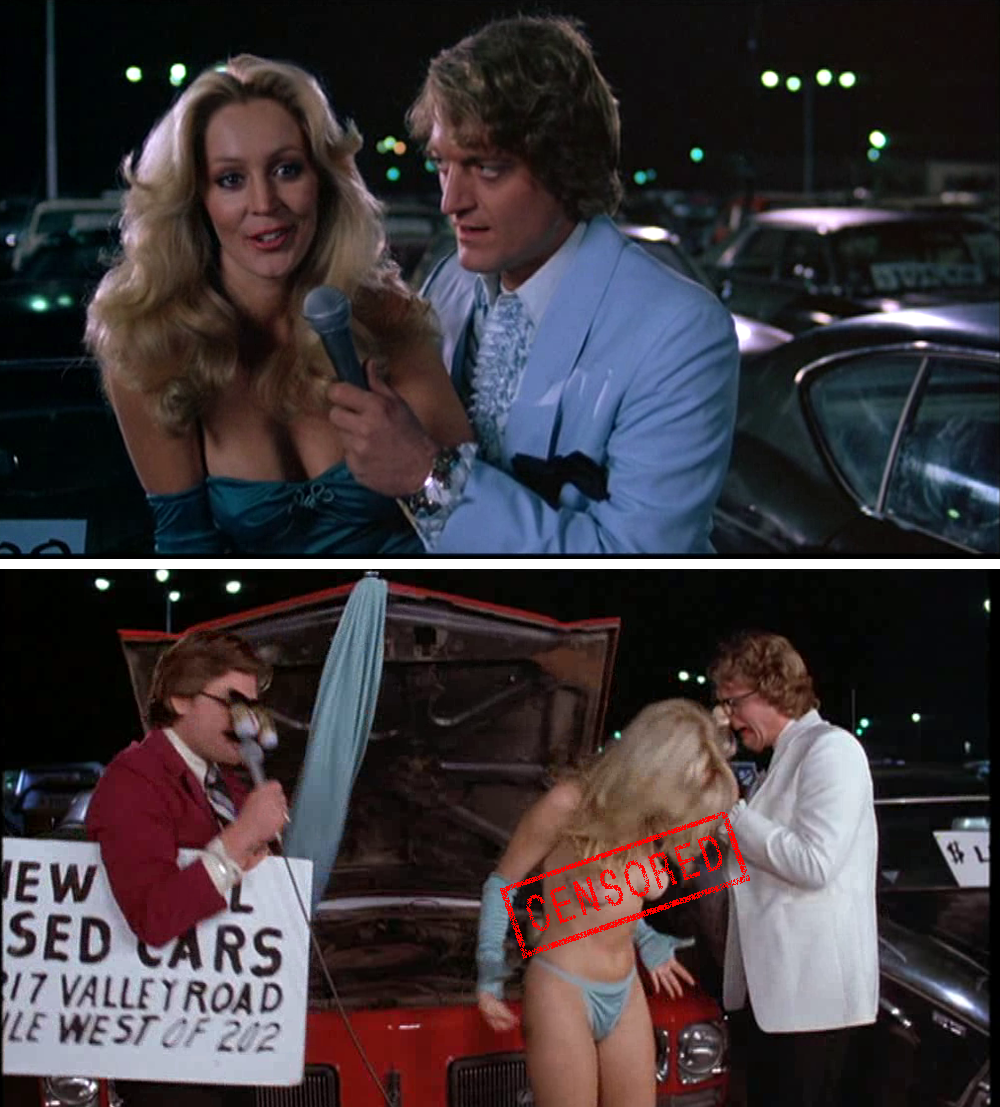 In a particularly memorable scene from this Kurt Russell film, a woman in a live TV advert gets her clothes caught in the trunk of a car… which (surprise) is completely yanked off when the trunk lid opens. Thus, boobs are broadcast to the masses, and comedy ensues. 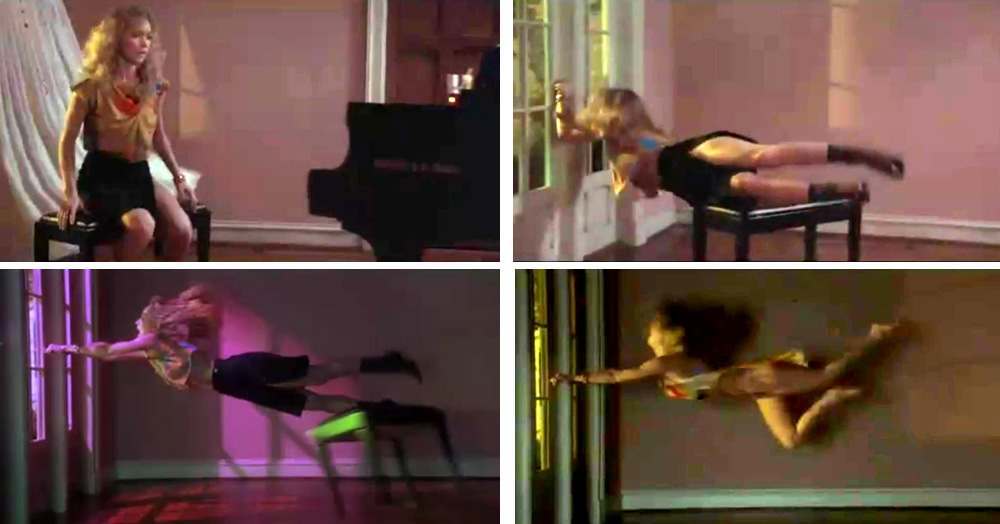 We covered this in our epic “Top 20 Gratuitous Nude Scenes of the 1980s”: a piece that was heralded by critics and scholars alike. In this scene, a pianist has the clothes sucked off her body by a cosmic vortex then is catapulted naked from a chimney.

In an effort to help two men clinging for dear life to a pole on a building ledge, Wendy King disrobes to offer her pals a lifeline. It’s the logical course of action – what else could she do?

But that is voluntary disrobing. The unexpected part comes next…

Wendy must jump to the fireman’s safety net below. She can’t muster the courage, so her friend gives her a push which accidently removes her bra. A shocked crowd watches the now-topless Wendy from below. Oh, the hilarity! Watch it for yourself – the scene in question starts around 7:30.

In which the loveable retard, Jerry Lewis, accidentally disrobes a glamourous celeb as she deplanes. The best part is when Jerry rolls the poor humiliated women in the red carpet.

The clothes ripping gag was clearly a trend in Jerry Lewis films. It happens again in Who’s Minding the Store? In this scene, a department store vacuum cleaner with enough suction to kill a man, begins sucking everything in sight, including an innocent bystander’s dress.

Another naughty vacuum cleaner popped up on a Dick Emery sketch. A woman pulls into the station and another improbably powerful vacuum manages to pull her clothes right off.

The poor girl is Susie Silvey, who was actually the skating silhouette in the opening title sequence of Octopussy. Watch the Emery sketch below.

Jerry Lewis’ partner in crime, Dean Martin, also tried his hand at the comedic dress removal. Stella Stevens spends a goodly portion of The Silencers in revealing attire (a bikini, rain soaked, lingerie, etc.). I’m not entirely sure the clothes ripping scene was intended to be funny; however, the way it so seamlessly left her body in one stroke was like something from a cartoon.

The undisputed king of the disrobement for comedic effect is Benny Hill. The number of times he used this gag is uncountable, but it just never stops being funny.

The scene begins with a leggy girl taking a ride on the back of a motorcycle. True to form for this British comedy, plenty of slapstick is to be had as passerby stumble, fall down, and wreck as they ogle the lovely passenger’s gams.

Then the couple stops and enters into an argument. She insults his manhood (“Mr. Big… except where it counts!”) and then calls him a “male chauvinist pig” (a low blow indeed). Subsequently, the cyclist drives off, taking her clothes with him. He apparently knew her garment was stuck in the bike, because he knowingly whispers “knickers” before taking flight.

This whole tawdry scenario starts at about the 7:00 minute mark. There’s about 2 seconds that are definitely NSFW.

But it’s not over…. this very same film repeats our beloved gag once more…

The titular character arrives to fix a garbage disposal, and as luck would have it, the woman’s flared sleeve gets caught….

… and, naturally, her entire gown is swallowed up, leaving her stark naked… and the comedy comes from the compromising position they’re in when her husband enters. It’s a joke that never gets old.

The UK game show Generation Game was thoughtful enough to include a comedic skit amid the competition. Here, co-hostess Melanie Stace promises the audience that she will never agree to let host, Jim Davidson, “throw those big sharp knives at me again.” Cut to “30 seconds later” and she’s pinned to a target. (insert uproarious laughter)

Next, Melanie proclaims that she’s glad she’s wearing trousers so “you won’t be able to do to me what you did to me last week”. Cut to Melanie wearing a dress and it tearing off as she steps away from the target. (insert more laughter… this time not so uproarious, and little bit awkward) 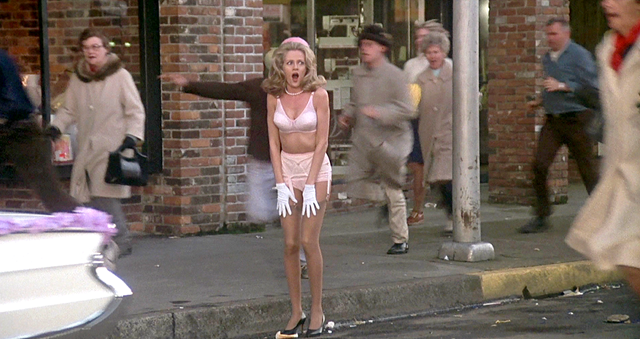 The scheming sorority girl, Babs (Martha Smith) who hates the guys at Delta Tau Chi Fraternity gets her comeuppance at the end of the film. She’s pushed off a parade float and clothes tear off, leaving her in her publicly humiliated amid the busy street.

FYI: Martha became a successful real estate agent in Los Angeles. She can currently been seen on some episodes of Selling LA on HGTV.

Just as in Animal House, we’re supposed to laugh as stuck-up rich girls get publically stripped and shamed. Virginia Madsen is the socialite who gets her shirt torn open by Andrew McCarthy. Guests, Rob Lowe and John Cusack laugh uncontrollably as the exposed debutante runs away. Watch it on YouTube (NSFW), and you too can delight in the comedic shaming.

Never has attempted rape been portrayed so comedically. Penelope (Natalie Wood) is asked to stay after class by her professor (Jonathan Winters). Things are going about innocently until the professor, instantaneously transforms into a slobbering, groping, raping madman.

I suppose we’re supposed to laugh hysterically as Jonathan Winters chases her around the room, tearing off her dress. It would be a shockingly uncomfortable scene were it not for the cartoonish expressions and mannerisms which clearly spell-out that this is all in fun. File this under “sexual assault slapstick”.

In which a policeman tears off the habit of a woman (Francine Walker) disguised as a nun. Take note that so often, when the clothes are unexpectedly yanked, the lady is decked out in stunning garters and lace.

During a school play (Othello), Reese Dinsdale steps on Deborah Norton’s dress and as she steps away it gets ripped off revealing a stunning white Basque. Naturally, she’s not wearing her threadbare panties with the drooping elastic waistband.

Watch the episode on YouTube. The scene starts around 7:50.

The clothes ripping gag is so overplayed, so long-standing, that it was only a matter of time before it was parodied. A fine example is Carol Cleveland having her clothes ripped off as she’s being chased by a monster on Monty Python. The trope was similarly parodied on an episode of SCTV in the “Monster Chiller Horror Theatre – Dr. Tongue’s 3D House of Stewardesses” skit.

A troupe of stewardesses (including Catherine O’Hara) are stranded at the haunted castle, and John Candy commands Bruno (Eugene Levy) to strip the women before he turns them into zombie slaves. It doesn’t sound funny at all as I write this, but it is. See for yourself.

And while we’re talking about parodying the “clothes ripping off” trope, I’ll leave you with Kenny Everett.