Prior to the 1970s, blue jeans were primarily work clothes.  You’d wear them to do yard work, but would never dream of wearing them shopping or to a social function.  Then came the Boomers’ counterculture, and suddenly jeans were for all occasions, and even considered highly fashionable.  Let’s have a look at some advertising and fashion spreads from the Decade of Denim, the 1970s.  Enjoy. 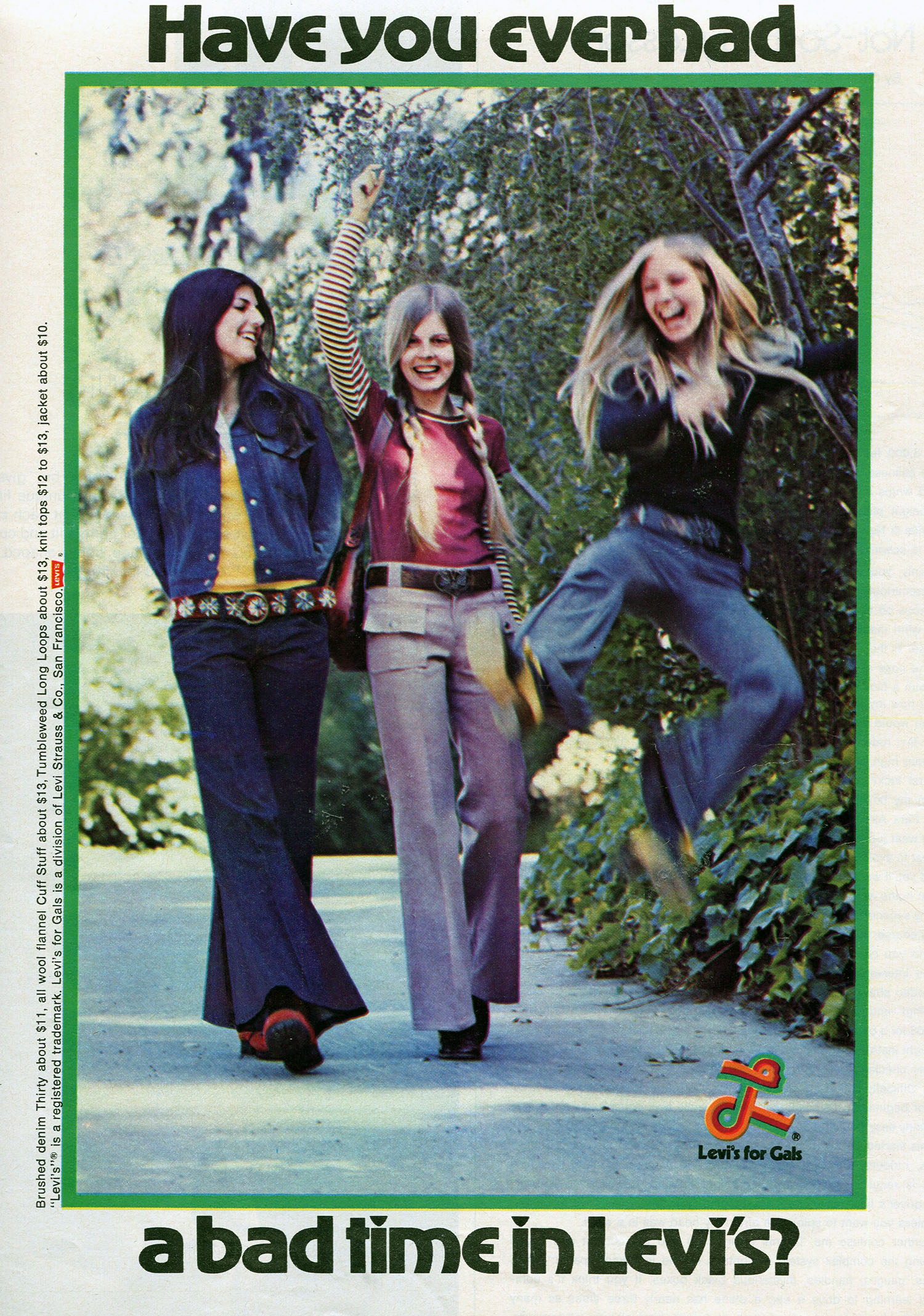 “Levi’s for Gals” brand featuring a girl that is really enthusiastic about her bell bottoms (either that, or partaking in the national pastime of the seventies: recreational drug use). 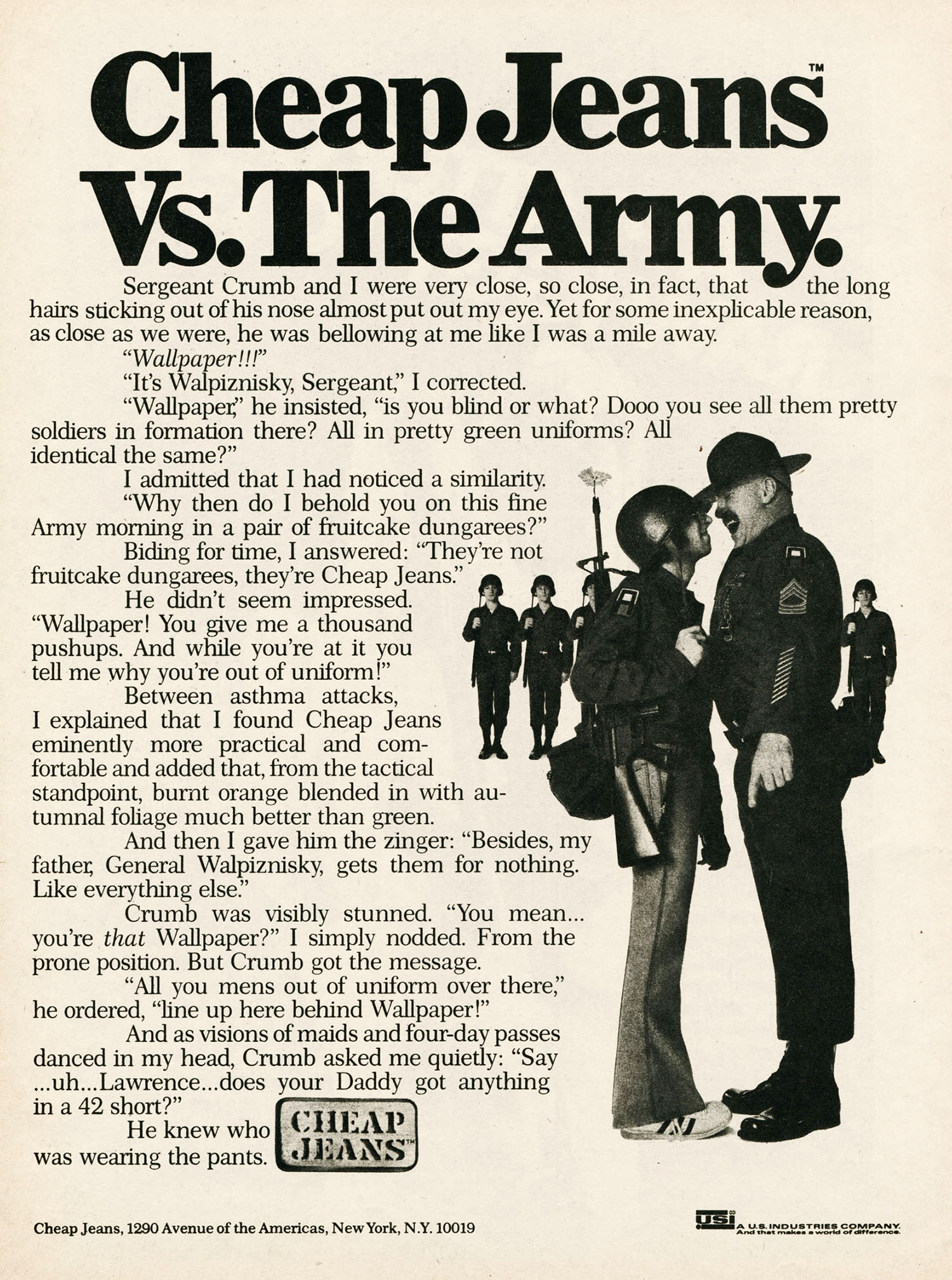 This Cheap Jeans ad comes from a 1970s issue of Creem magazine.  The story describes hapless army private Walpiznisky showing up in jeans and infuriating the sergeant: “Why then do I behold you on this fine Army morning in a pair of fruitcake dungarees?” 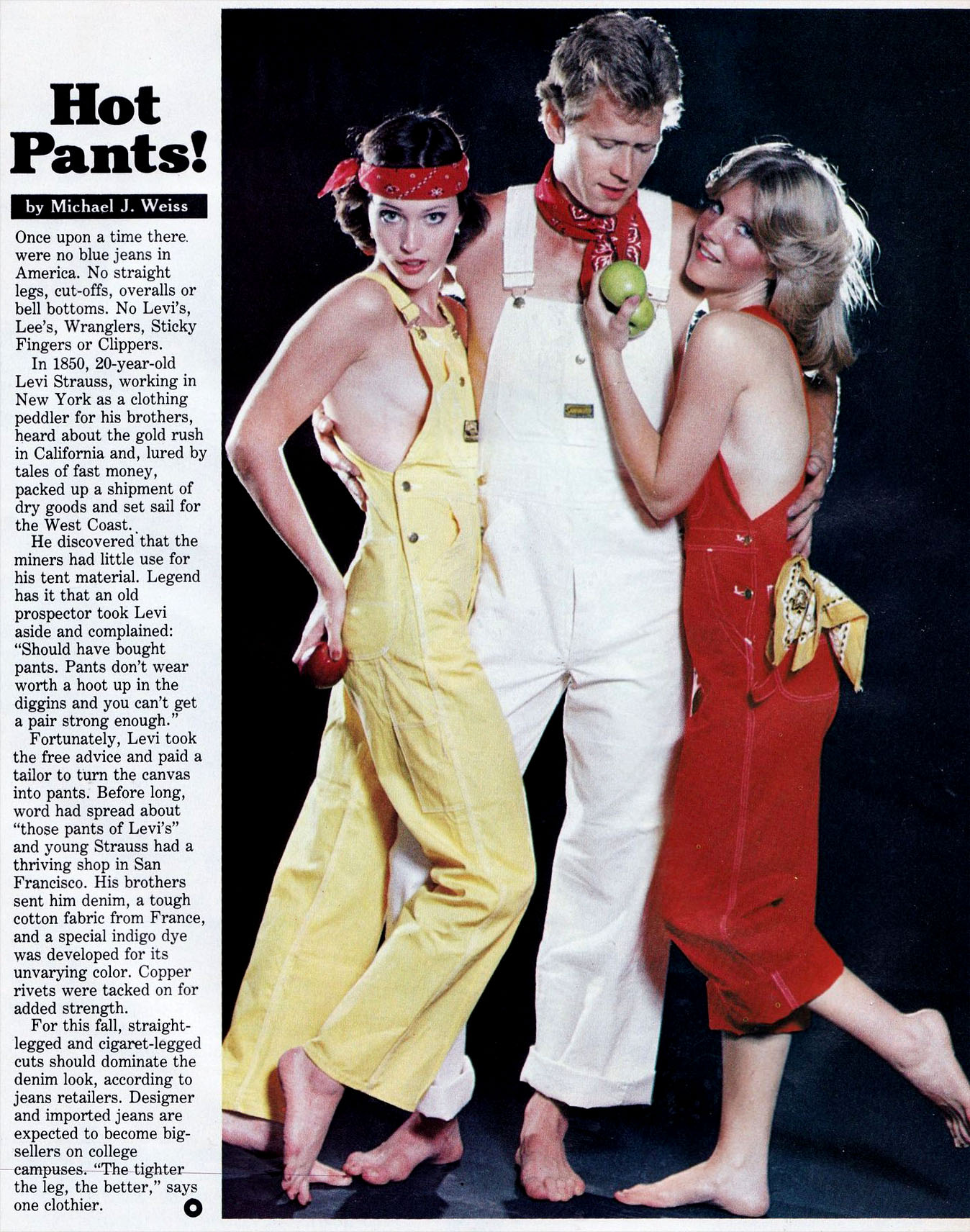 This page from Circus Weekly, November 27, 1978, tells the story of jeans in America:

“Once upon a time there were no blue jeans in America.  No straight legs, cut-offs, overalls or bell bottoms.  No Levi’s, Lee’s, Wranglers, Sticky Fingers or Clippers.  In 1850, 20-year old Levi Strauss, working in New York as a clothing peddler for his brothers, heard about the gold rush in California and, lured by tales of fast money, packed up a shipment of dry goods and set sail for the West Coast.  He discovered that the miners had little use for his tent material.  Legend has it that an old prospector took Levi aside and complained: “Should have bought pants.  Pants don’t wear worth a hoot up in the diggins and you can’t get a pair strong enough.”

Fortunately, Levi took the free advice and paid a tailor to turn the canvas into pants.  Before long, word had spread about “those pants of Levi’s” and young Strauss had a thriving shop in San Francisco.  His brothers sent him denim, a though cotton fabric from France, and a special indigo dye was developed for its unvarying color.  Copper rivets were tacked on for added strength.”

For this fall, straight-legged and cigaret-legged cuts should dominate the denim look, according to jeans retailers. Designer and imported jeans are expected to become big-sellers on college campuses.  “The tighter the leg, the better,” says one clothier.” 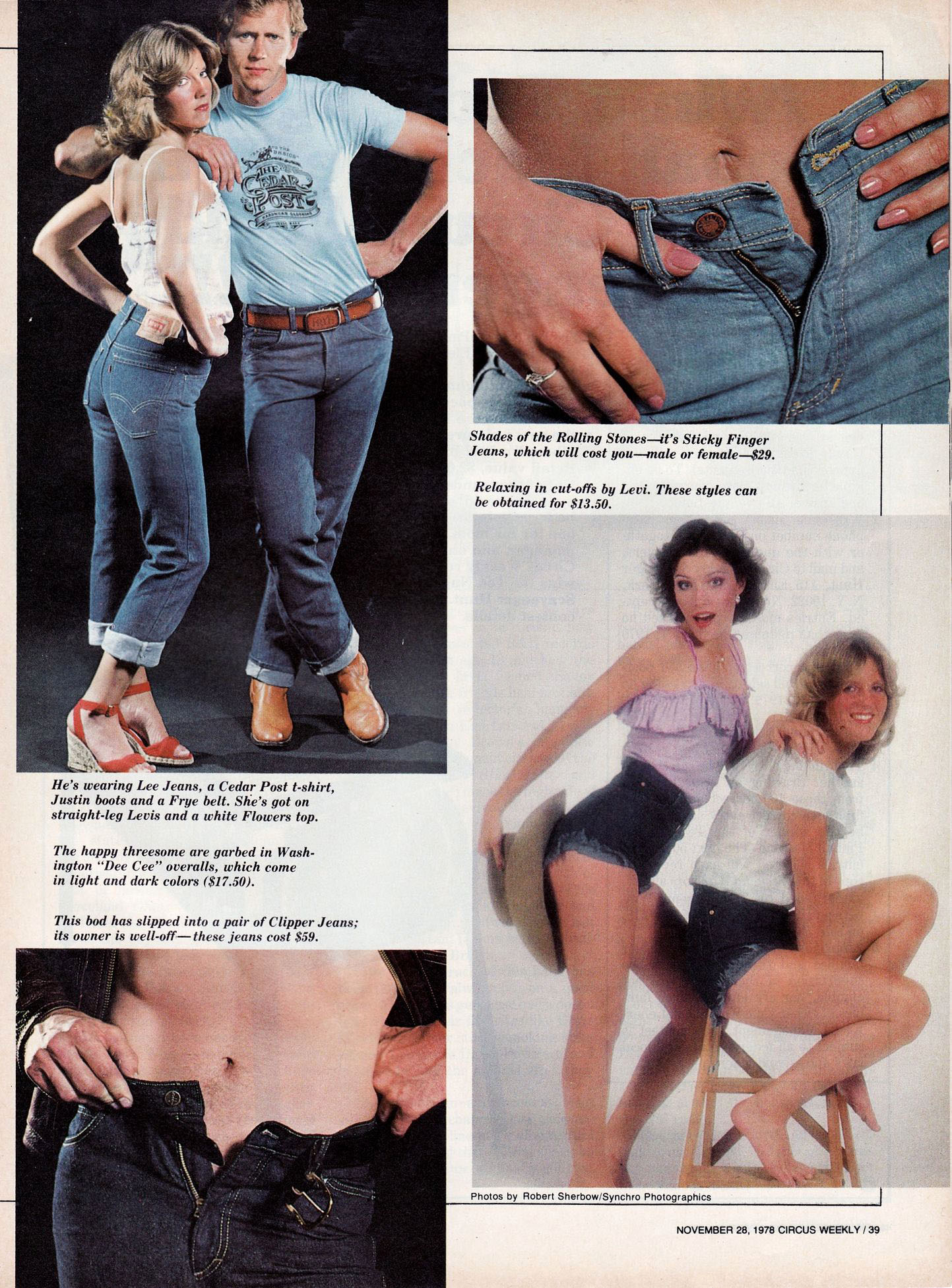 Page two from the previous 1978 article from Circus 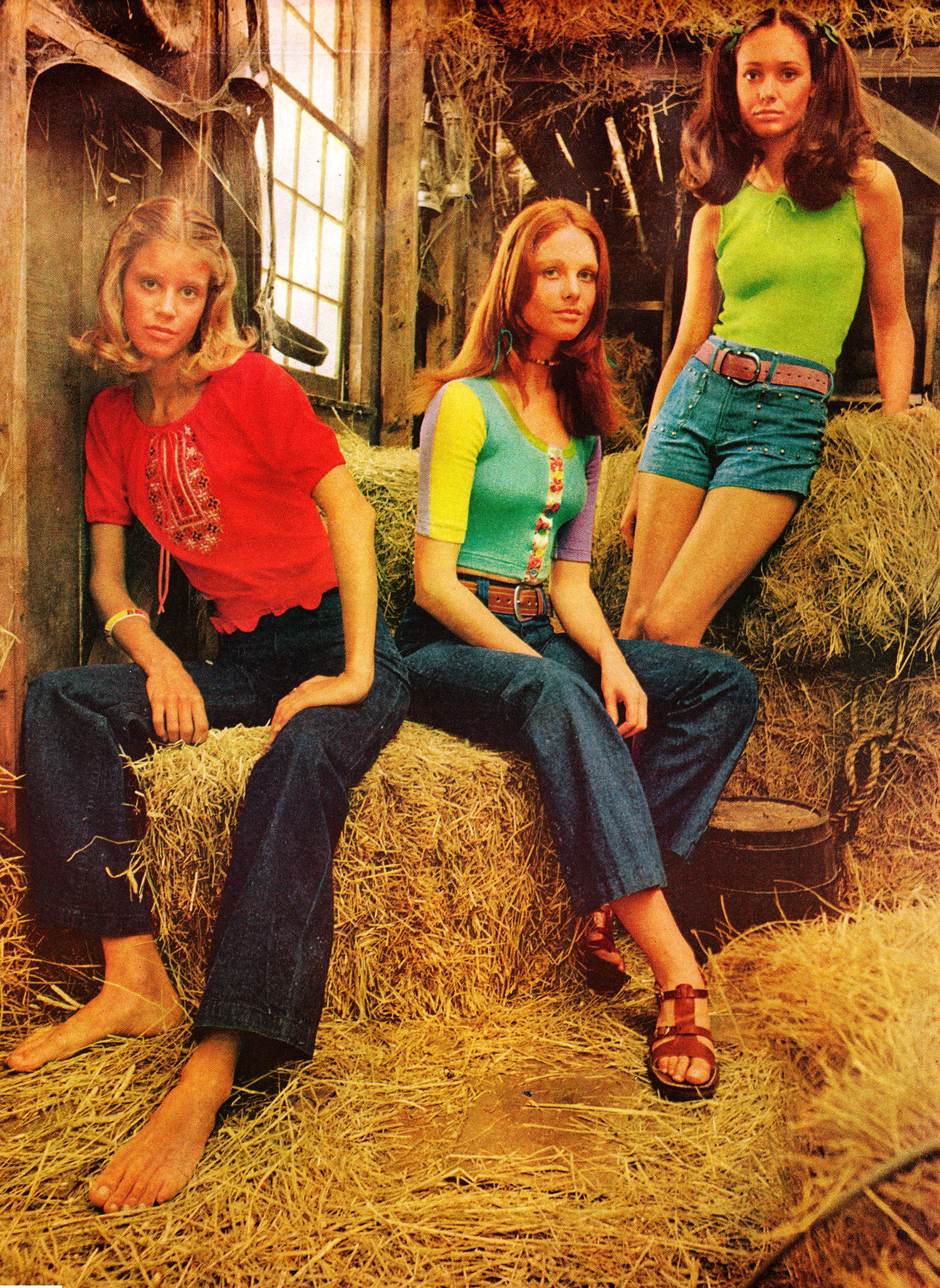 Fashion spread from a 1971 issue of Ladies’ Home Journal magazine 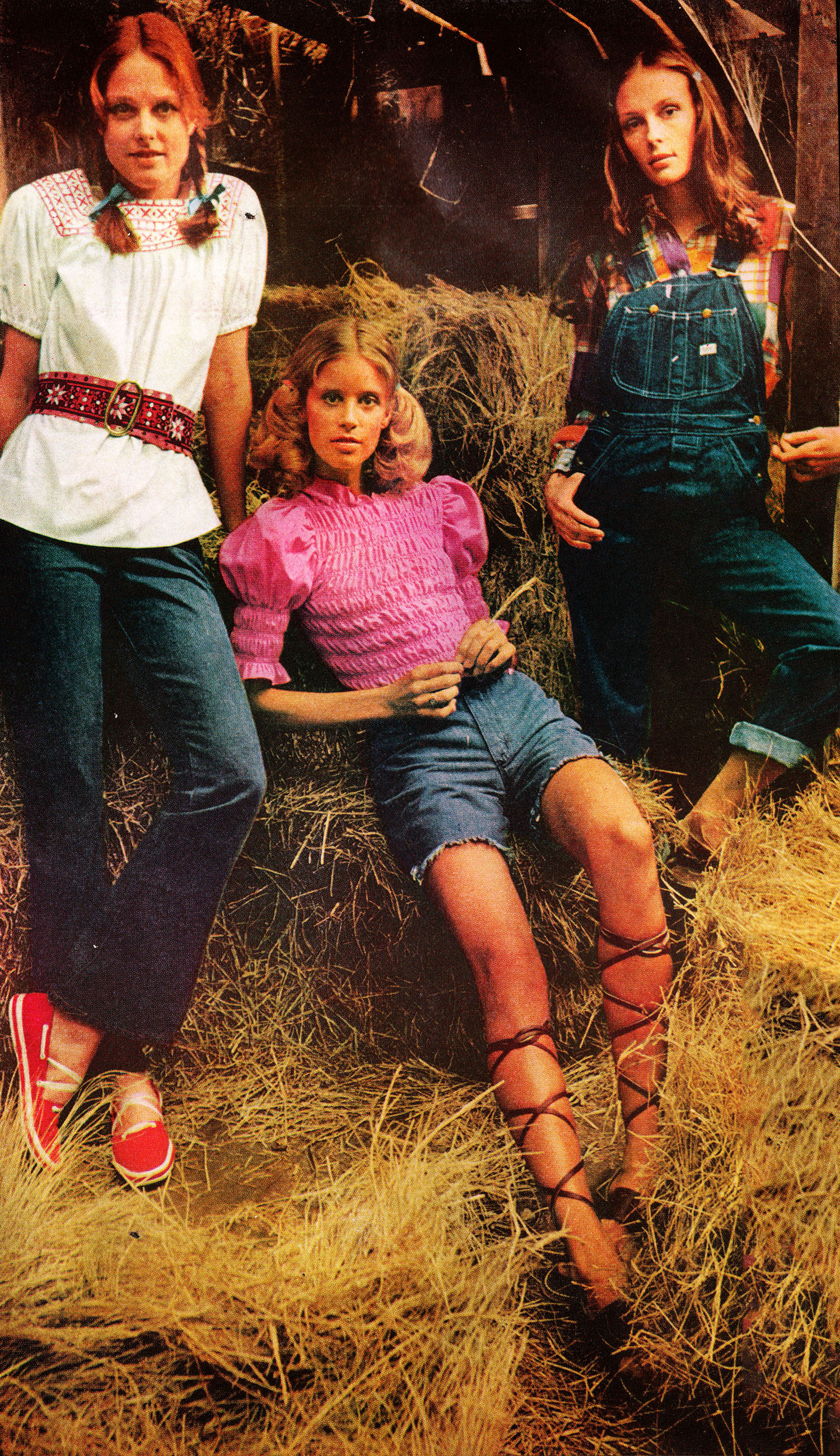 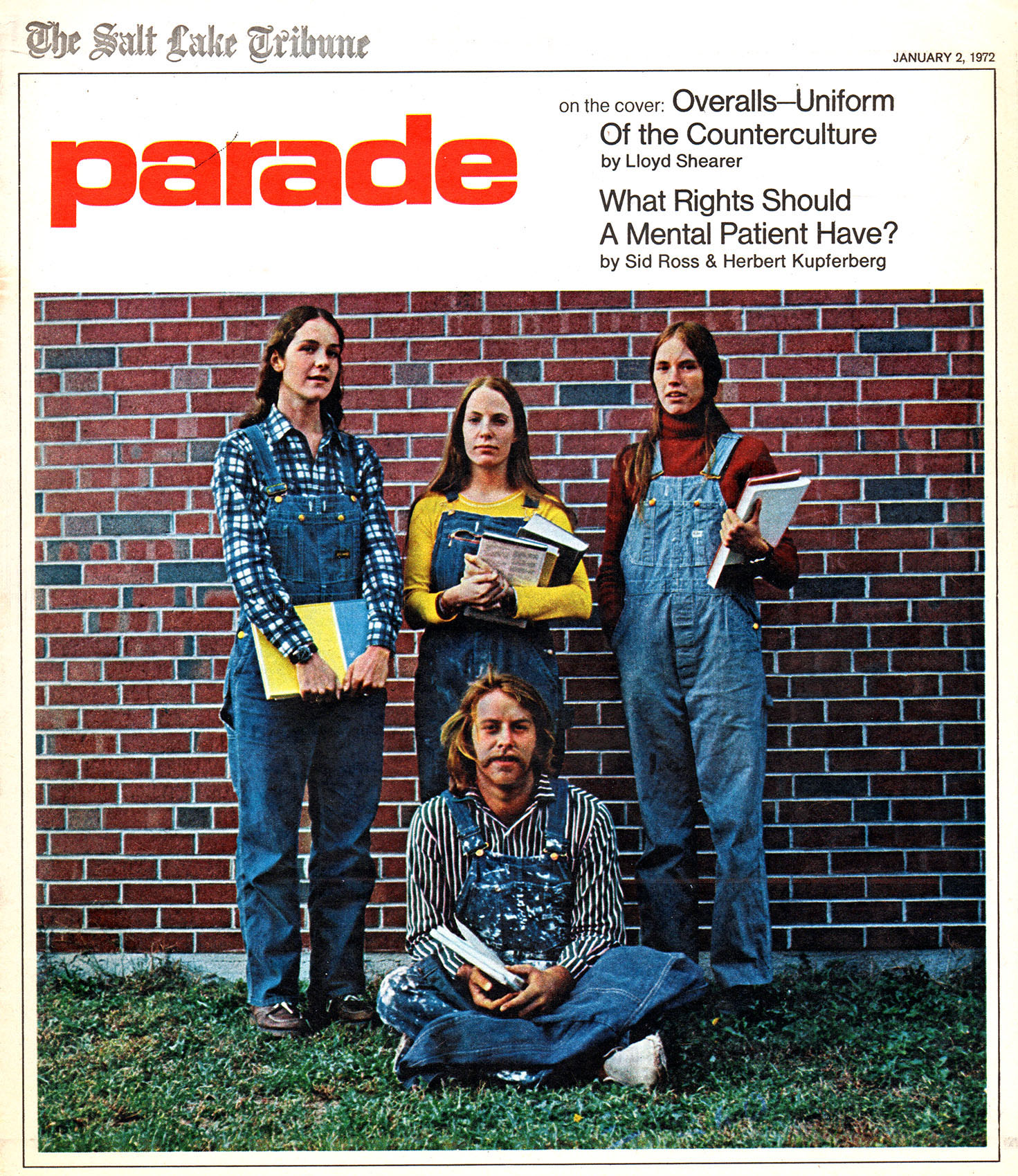 This January 2, 1972 issue of Parade magazine features the cover story: “Overalls – Uniform of the Counter-Culture”.  Yet another article about the rise of denim in America. 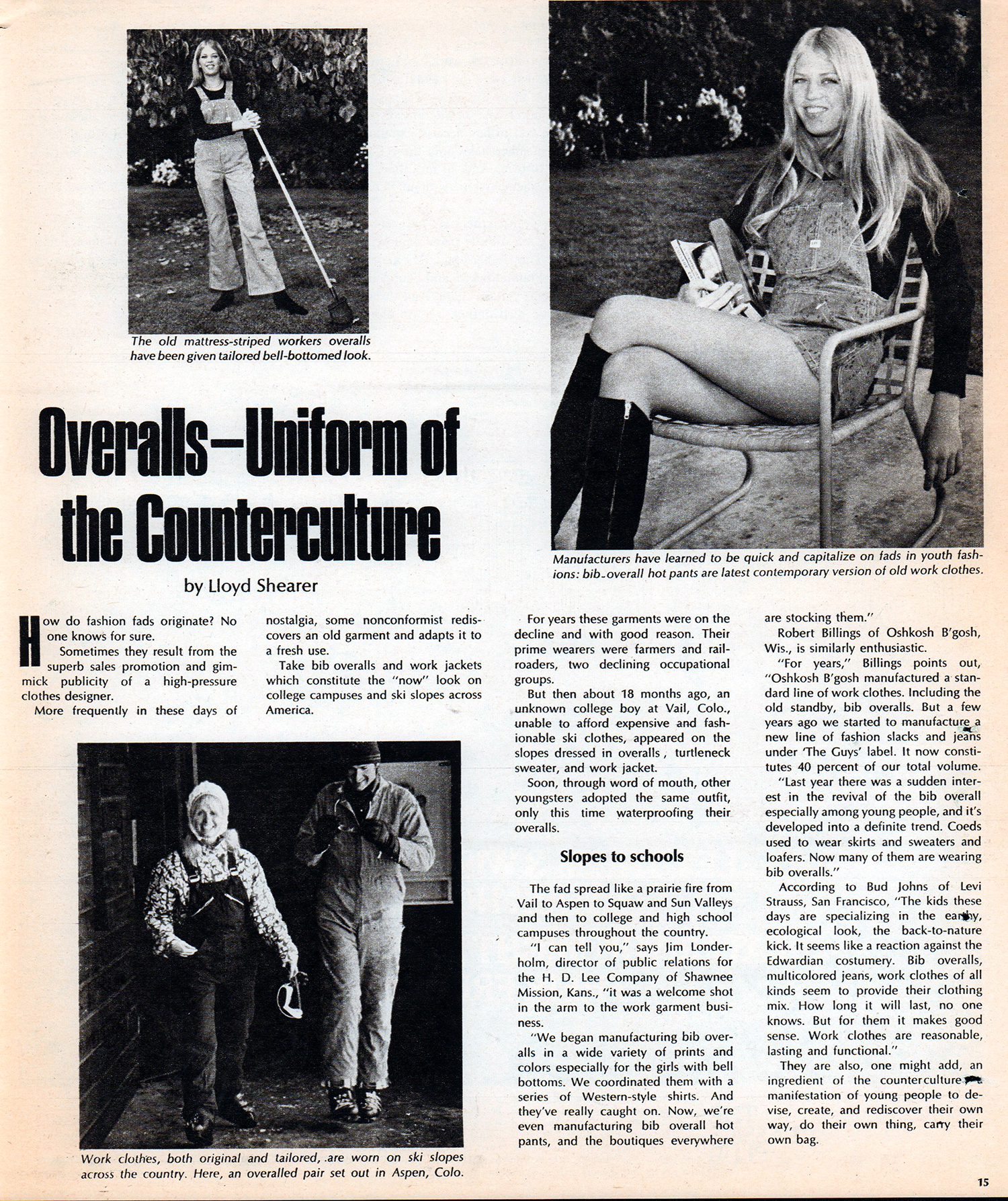 OVERALLS: UNIFORM OF THE COUNTERCULTURE

How do fashion fads originate? No one knows for sure. Sometimes they result from the superb sales promotion and gimmick publicity of a high-pressure clothes designer. More frequently in these days of nostalgia, some nonconformist rediscovers an old garment and adapts it to a fresh use. Take bib overalls and work jackets which constitute the “now” look on college campuses and ski slopes across America.For years these garments were on the decline and with good reason. Their prime wearers were farmers and railroaders, two declining occupational groups.

But then about 18 months ago, an unknown college boy at Vail, Colo., unable to afford expensive and fashionable ski clothes, appeared on the slopes dressed in overalls, turtleneck sweater, and work jacket.Soon, through word of mouth, other youngsters adopted the same outfit, only this time waterproofing their overalls.

The fad spread like a prairie fire from Vail to Aspen to Squaw and Sun Valleys and then to college and high school campuses throughout the country. “I can tell you,” says Jim Londerholm, director of public relations for the H. D. Lee Company of Shawnee Mission, Kans., “it was a welcome shot in the arm to the work garment business. “We began manufacturing bib overalls in a wide variety of prints and colors especially for the girls with bell bottoms. We coordinated them with a series of Western-style shirts. And they’ve really caught on. Now, we’re even manufacturing bib overall hot pants, and the boutiques everywhere are stocking them.” 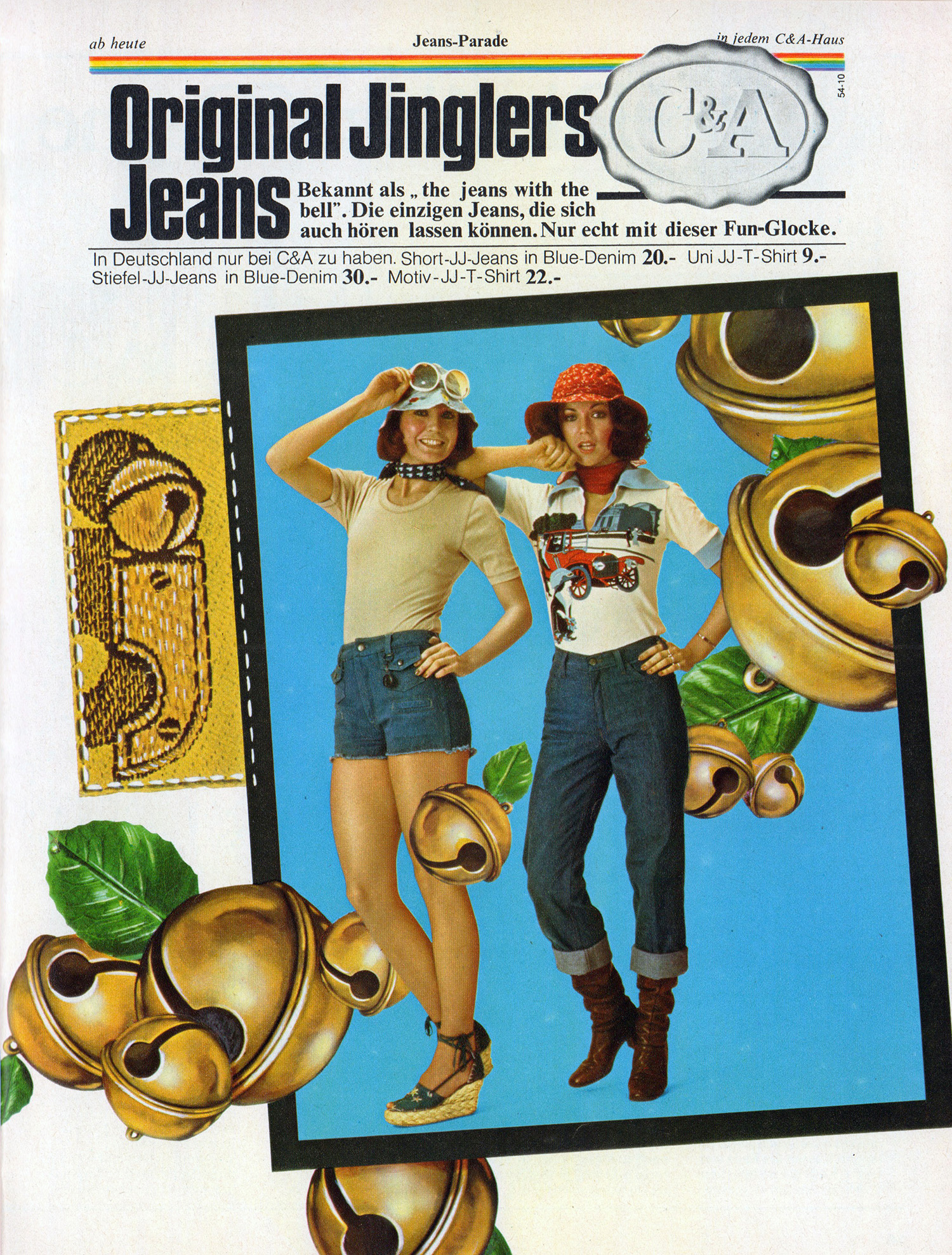 To demonstrate that the denim craze wasn’t limited to the US, I’ve scanned a couple Jinglers ads from a German magazine. 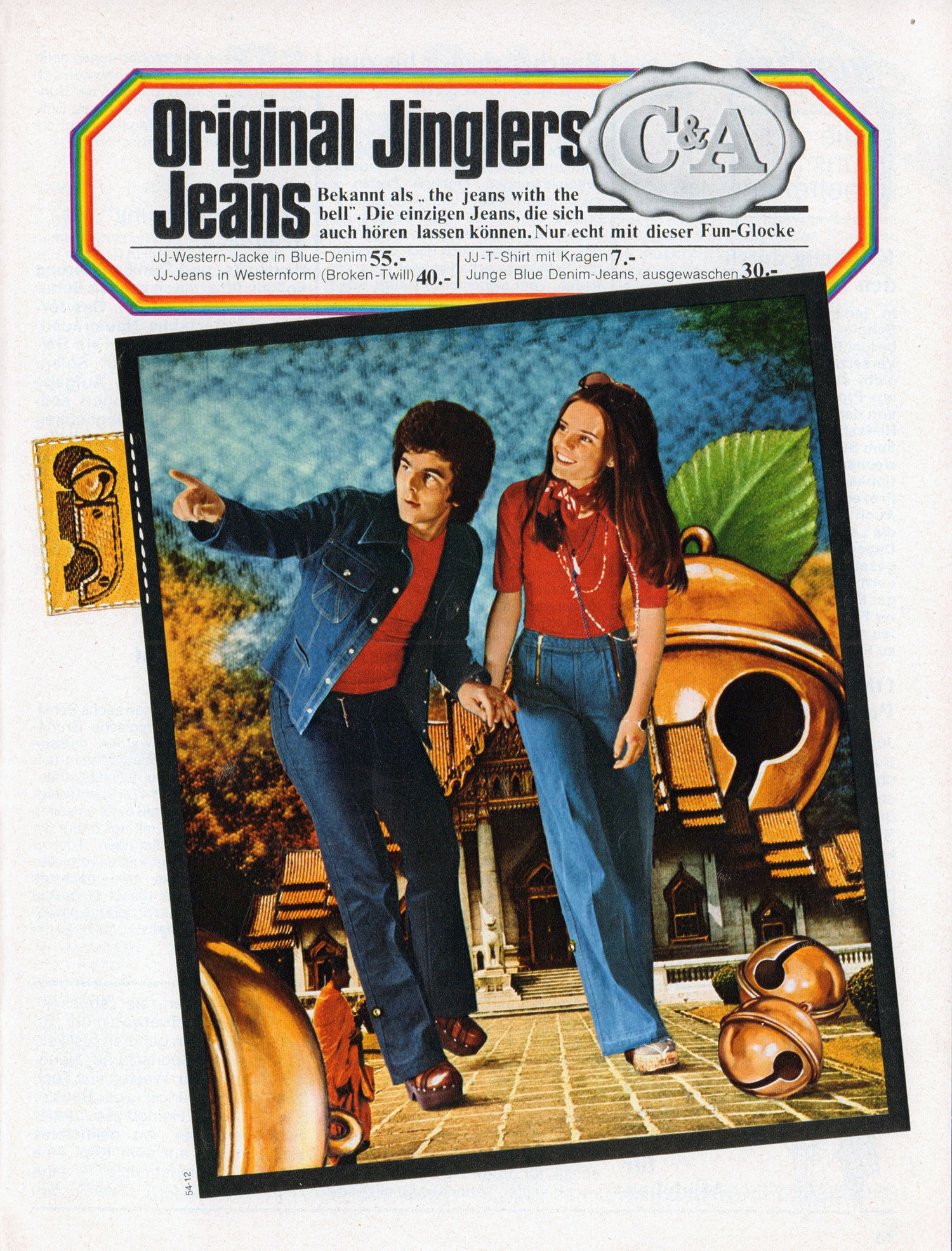 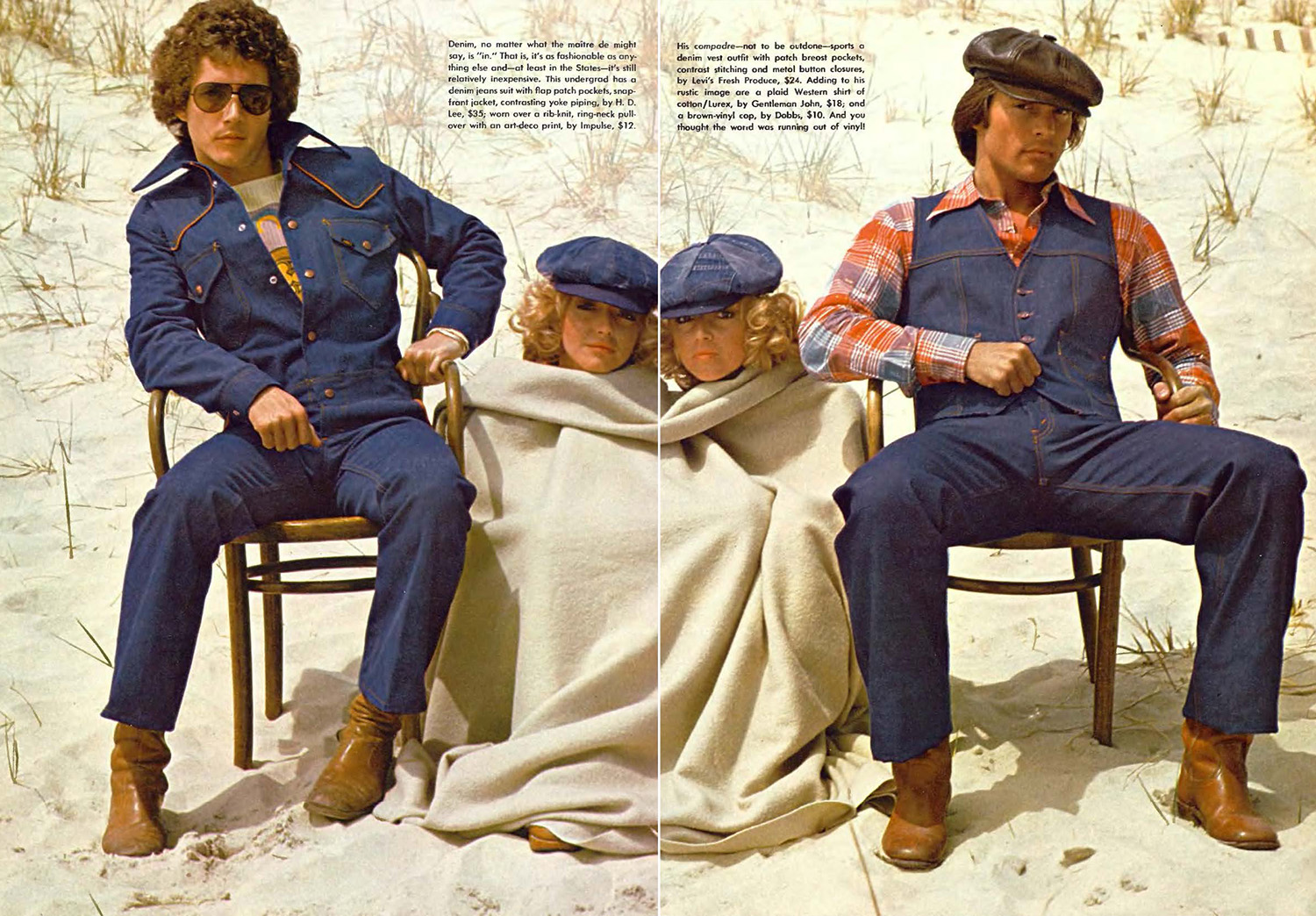 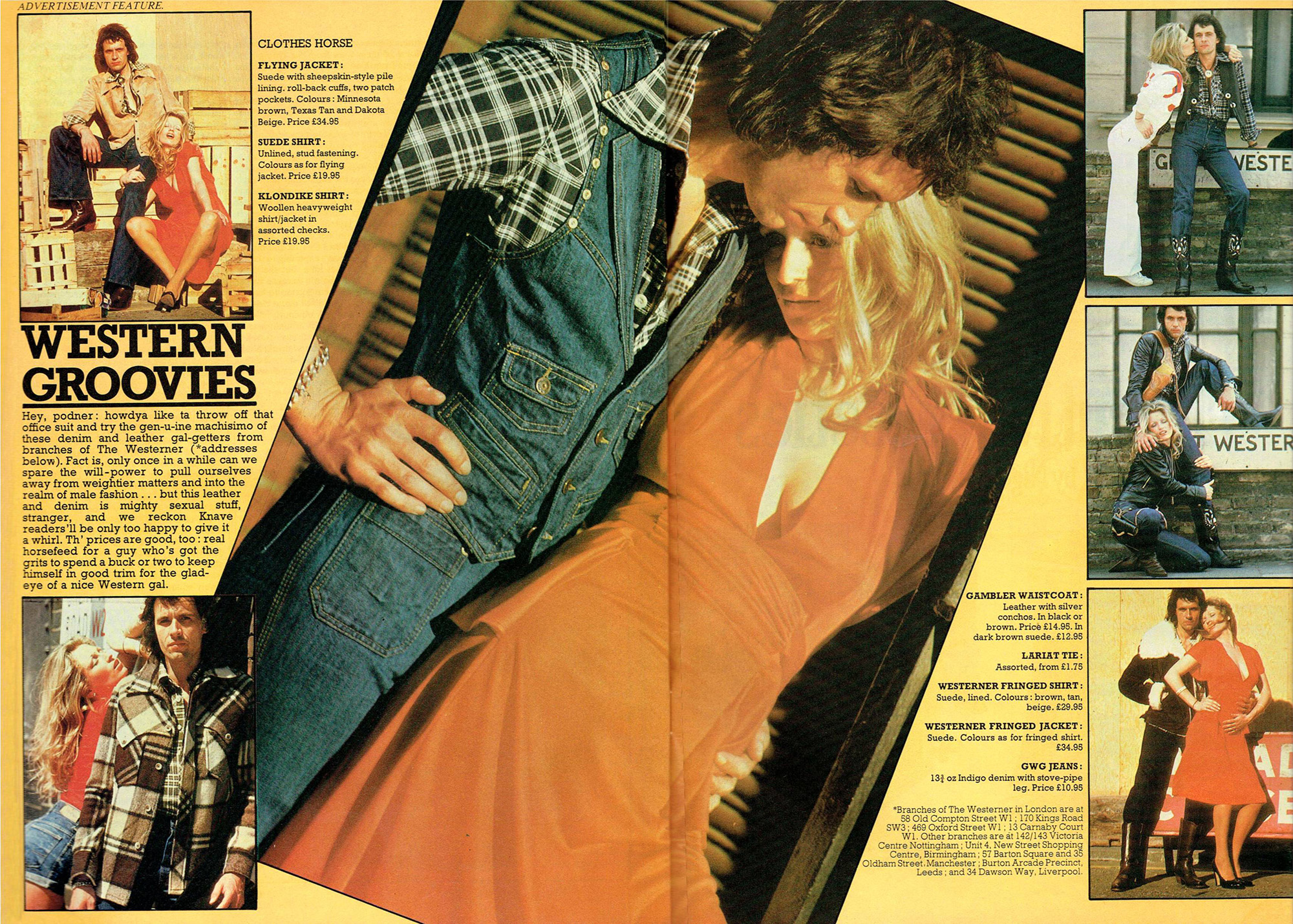 Hey, podner: howdya like ta throw off that office suit and try the gen-u-ine machisimo of these denim and leather gal-getters…. this leather and denim is mighty sexual stuff, stranger, and we reckon Knave readers’ll be only too happy to give it a whirl.  Th’ prices are good, too: real horsefeed for a guy who’s got the grits to spend a buck or two to keep himself in good trim for the glad-eye of a nice Western gal. 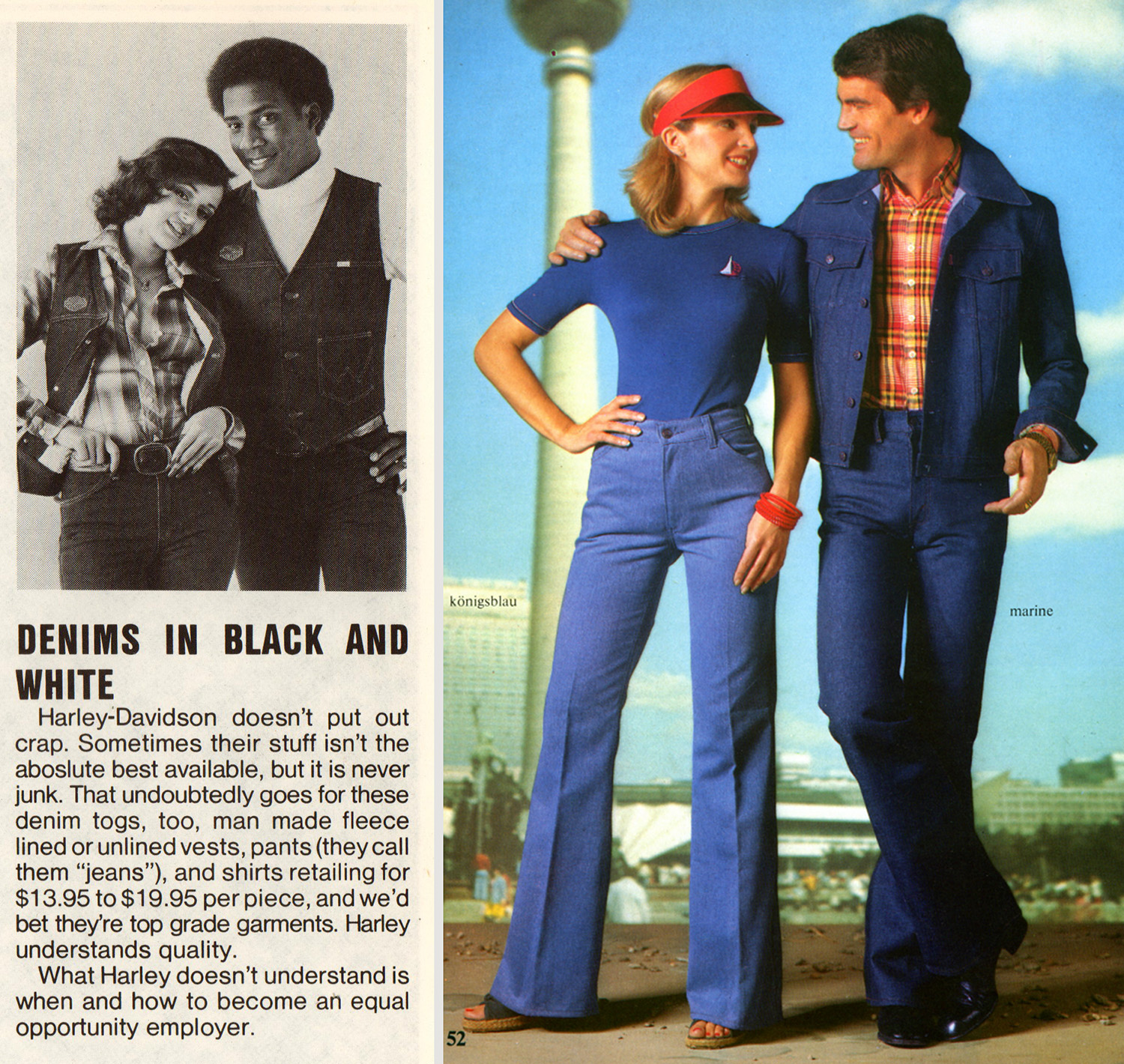 (L) From a 1970s biker magazine: “Harley-Davidson doesn’t put out crap.  Sometimes their stuff isn’t the aboslute (sp) best available, but it is never junk.” (R) Denim dynamite from 1977 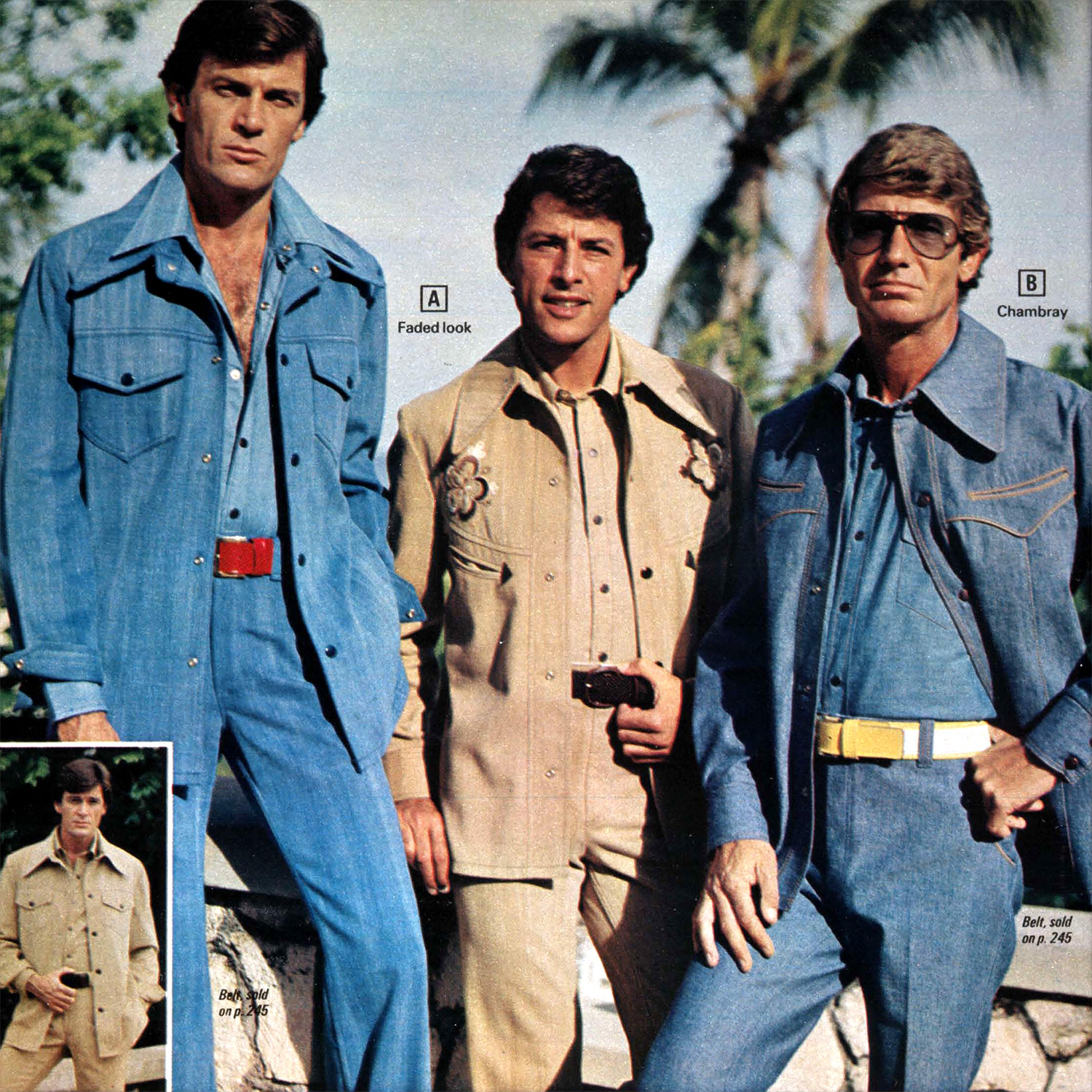 Ah, the denim leisure suit (from a 1970s Eaton’s catalog); not exactly the high-water mark in fashion history. 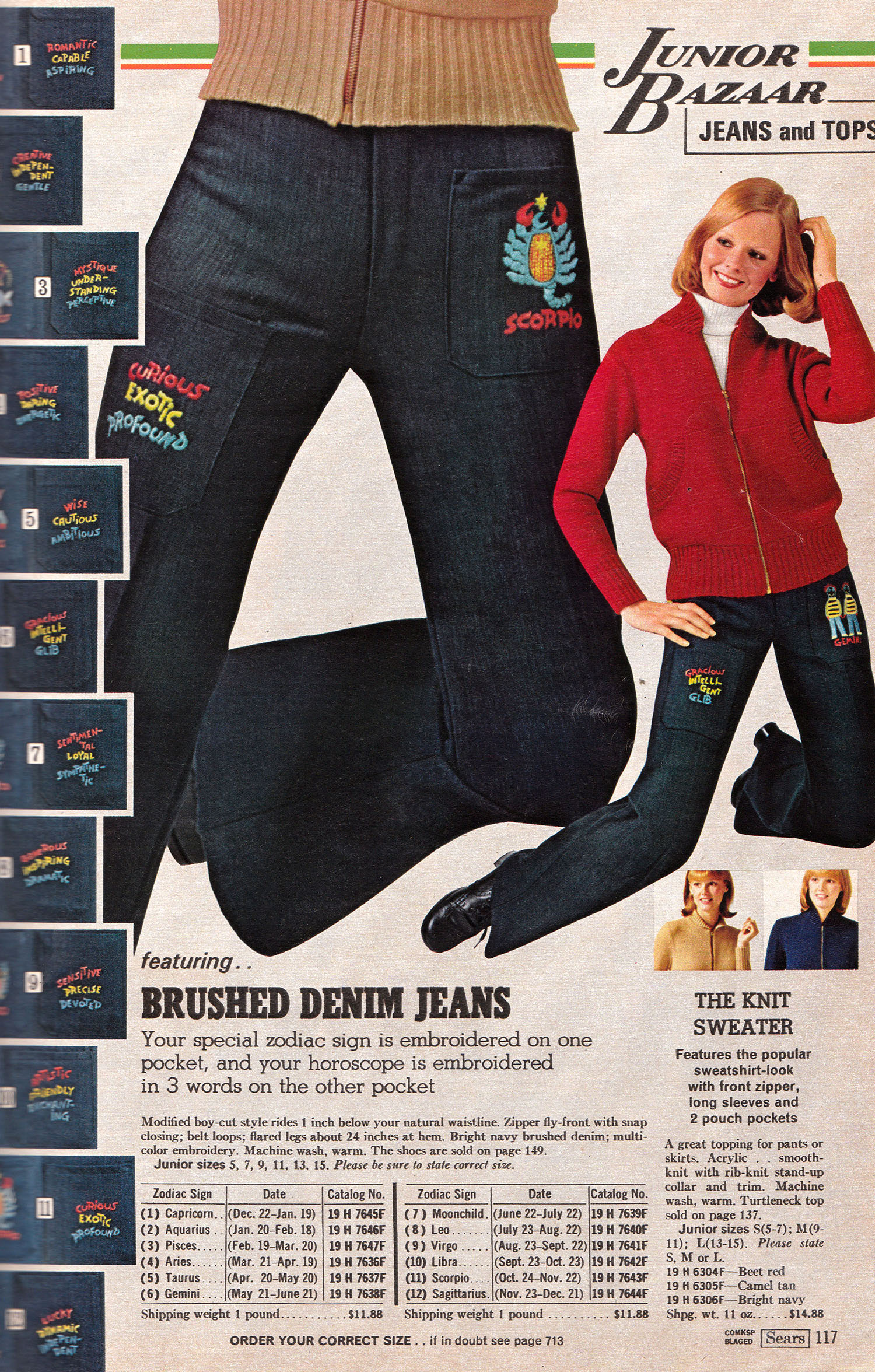 No post on seventies denim would be complete without mention of the pocket design fad.  Above, the Sears 1974 Fall-Winter catalog offers astrological signs for your pocket. 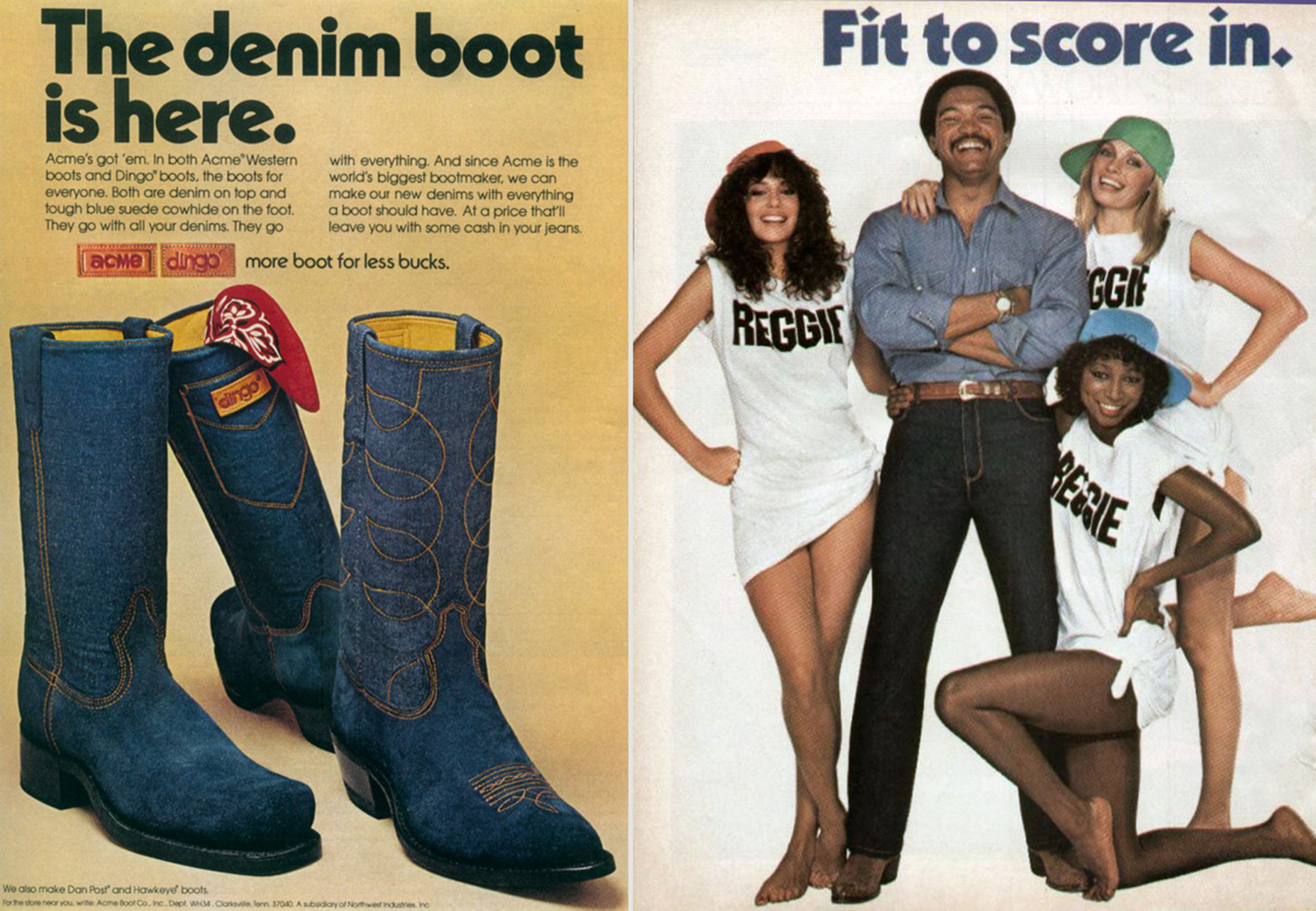 (L) 1974 gave us the denim boot, (R) Reggie Jackson shills for Murjani jeans.  For more jeans advertising check out this post on the Lee adverts of the seventies. 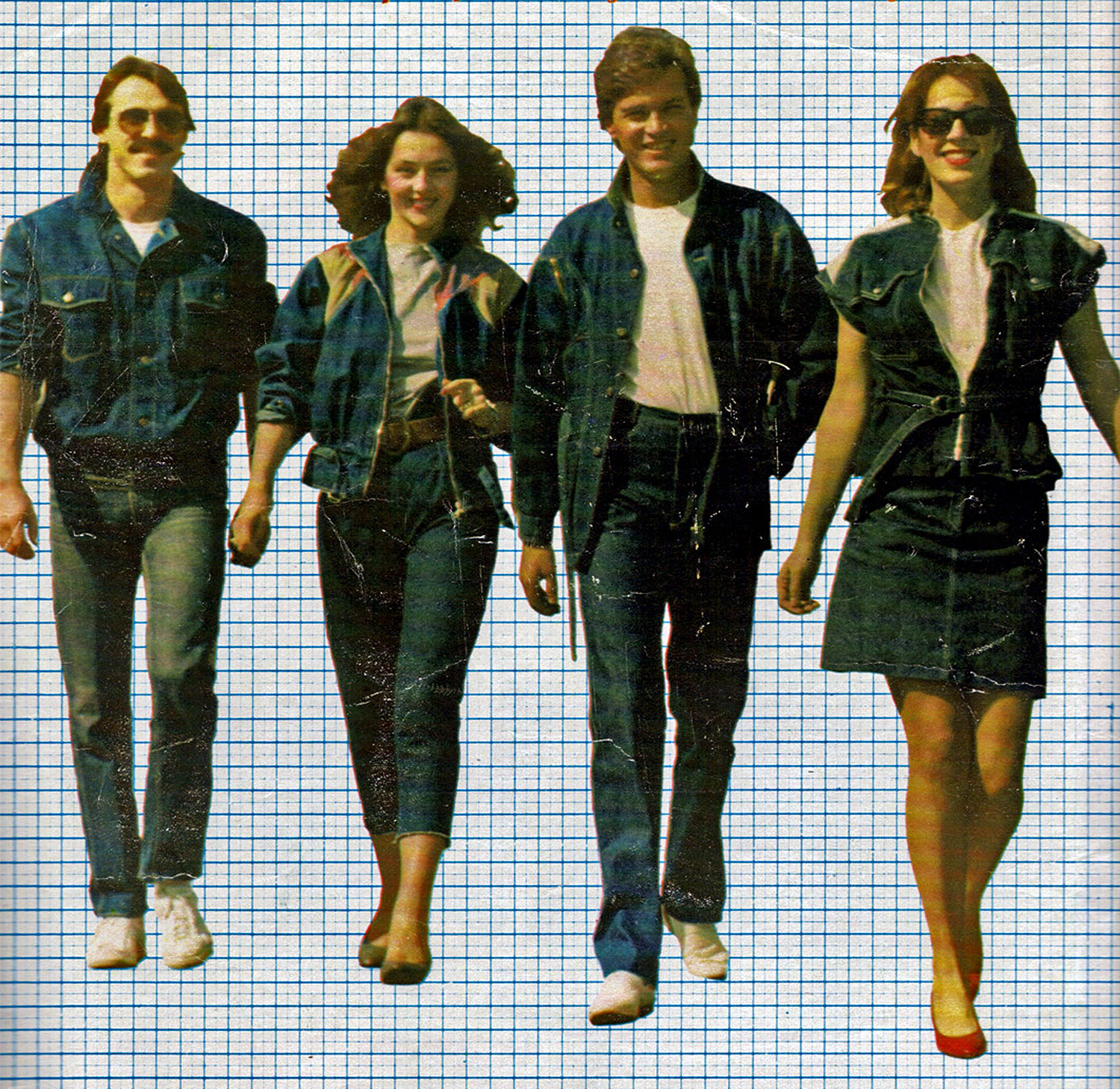 It’s the 1980s, and here comes the Denim Brigade.  Blue jeans may have started as a counterculture fashion statement, but by the mid-seventies it was commonplace… and remained so throughout the 1980s.  Of course, the 80s brought their own unique flavor to denim via acid-washed and puffy jackets… but that’s a topic for another post.  Until then.