ON March 2 1969: Concorde, the supersonic airliner, flew for the first time, taking off from Toulouse and taking the air for 27 minutes.

This is the story in photos of what led up to that maiden flight. 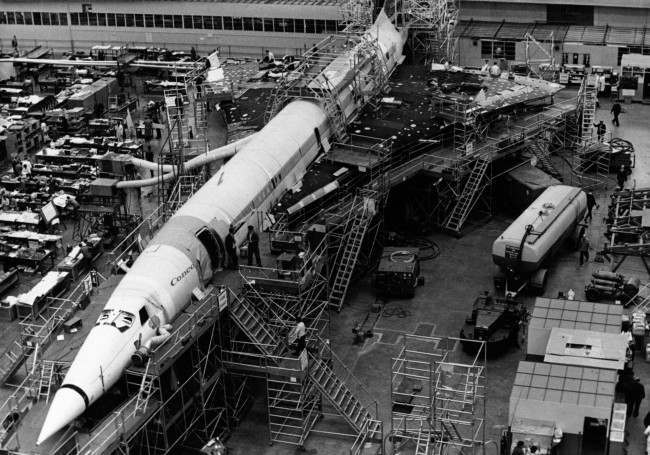 This is an overhead general view of the fuselage section of the Anglo-French supersonic jet airline Concorde, whose British prototype is under construction at the British Aircraft Corporation works at Filton, England, June 8, 1954.

Said pilot Andre Turcat: “Finally the big bird flies, and I can say now that it flies pretty well.” 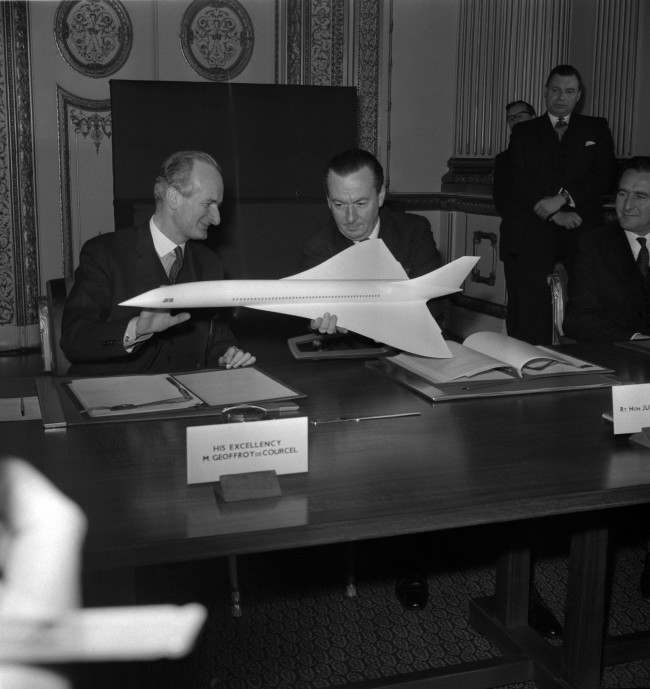 Julian Amery, the British Minister of Aviation and Geoffroy de Courcel, left, the French ambassador in London, look at a model of a proposed supersonic airliner, on November 29, 1962 in Lancaster House, London, United Kingdom, where they signed an Anglo-French agreement for the development jointly of a supersonic passenger airplane. Each country has agreed to spend between £75 million and £85 million for development and the tooling of production lines. 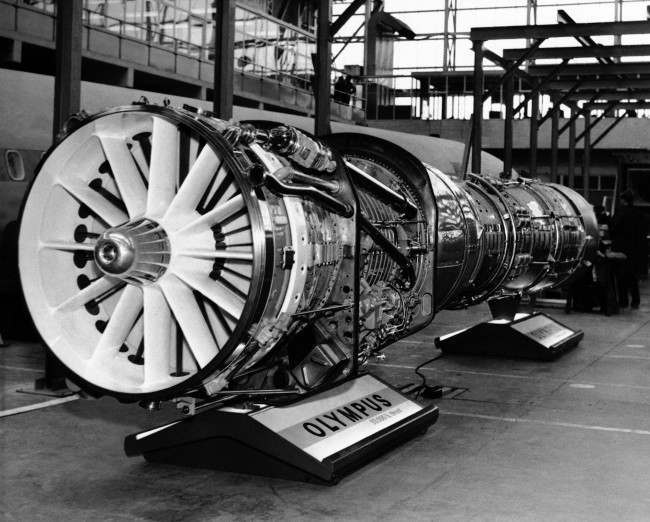 A Bristol Siddeley Olympus jet engine of the type which will power the Concorde, the Anglo French supersonic airliner, is pictured at the British Aircraft Corporation factory in Bristol, England, 1963. 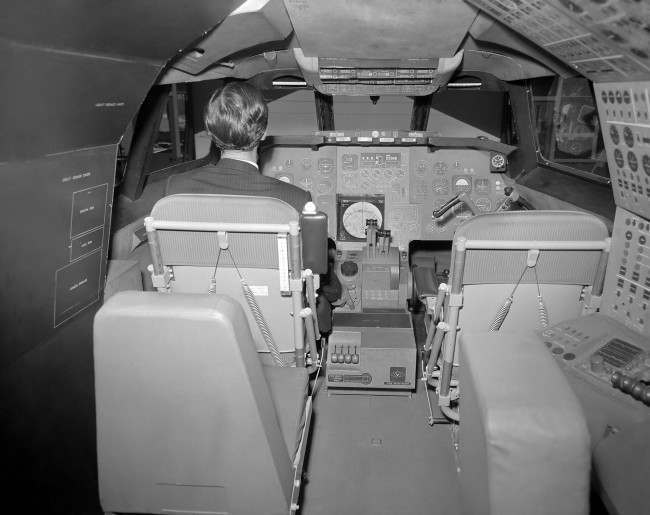 The flight deck in the full-scale mock-up of the Concorde’s cockpit, an Anglo-French supersonic airliner, which has been built at Filton, Bristol, works of the British Aircraft Corporation. The mock-up can be raised hydraulically to simulate the aircraft’s landing attitude so that pilots can assess visibility from the cockpit in the approach to landing. The French and British governments signed in November 1962 an agreement for the joint design, development and production of the Concorde by the British Aircraft Corporation and Sud Aviation of France. Date: 24/10/1963 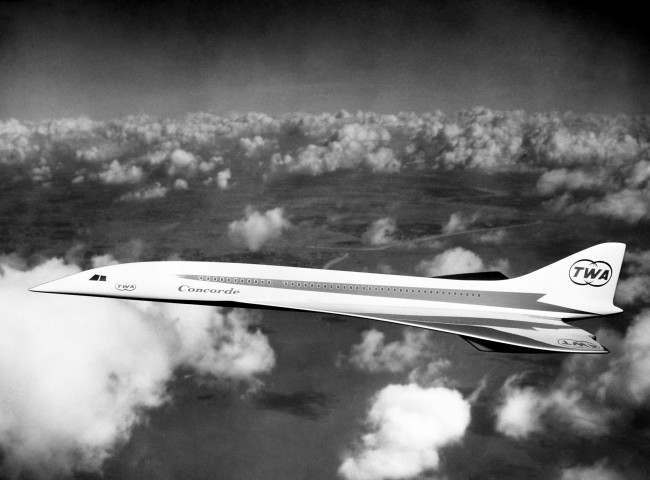 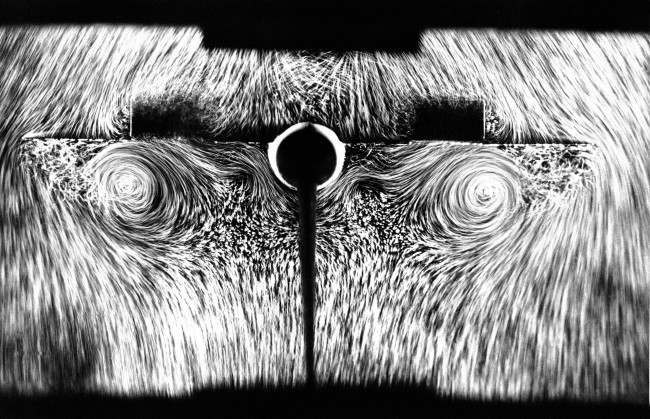 This is the wind tunnel of the French National Institute for aerospace research in France, shown July 16, 1965. It shows a reduced model of the Franco-British jet transport plane Concorde, going through tests in heavy wind pressure during landing phase. The tourbillions are photographed at the trailing wings. The fuselage (white circle) is illuminated thus allowing the picture to be taken. 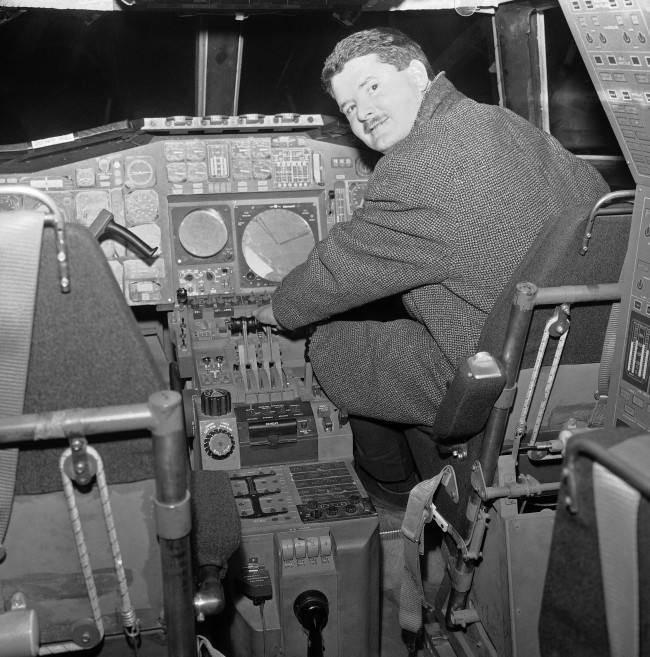 Flying a jet which will cruise at more than twice the speed of sound will be a new experience for pilots of the super-sonic transports due for their trial flights in 1968. Here a British pilot looks over the instrument panel in a mockup of the flight deck of the British-French Concorde at the British Aircraft Corporation plant at Bristol, England, Jan. 18, 1967, where a prototype is being built. With a cruise speed of 1,450 mph, the Concorde could make two round trips a day between London and New York. 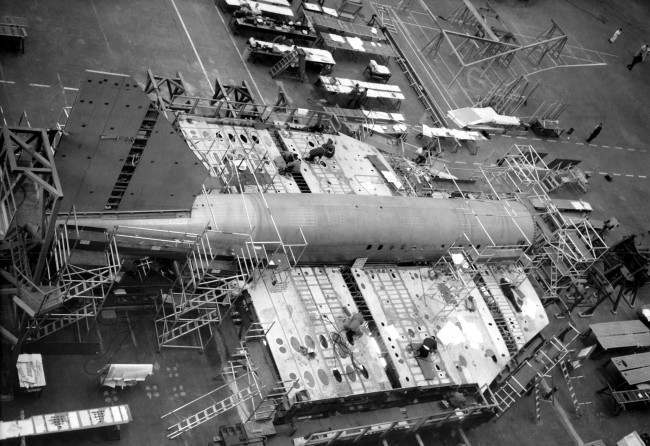 View of the Anglo-French Concorde supersonic jet airliner now under construction at the British aircraft corporation works at Filton, Bristol, England, Jan. 12, 1967, with the addition to the aircraft – the huge tail fin – in place. The aircraft building is running to schedule and it is hoped that the British-built Concorde will have its first flight in September 1968. The Concorde being built by the French at Toulouse, will, it is hoped, make its Maiden flight early 1968. So far the British aircraft corporation have received orders for 69 of these planes, the total cost of each being $16,800,000. 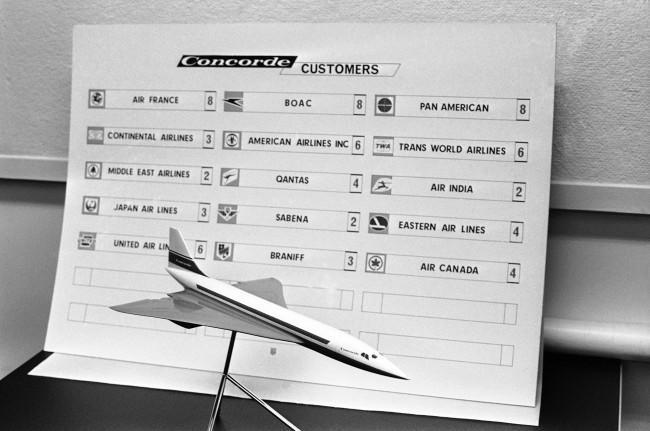 The International race is on to put the first supersonic transport on the market and eventually to dominate it. The British and French, jointly designing and building prototypes of their fixed-wing Concorde, are on schedule with Feb. 28, 1968, as the date for the jetÂs first flight. The American choice, a swing-wing Boeing, waits for a final go-ahead from President Johnson. But it will be bigger and faster. Its first flight is not expected before 1971. Here a Concorde model is seen in front of a British Aircraft Corporation sales chart, Jan. 18, 1967, showing 69 Concordes on order. 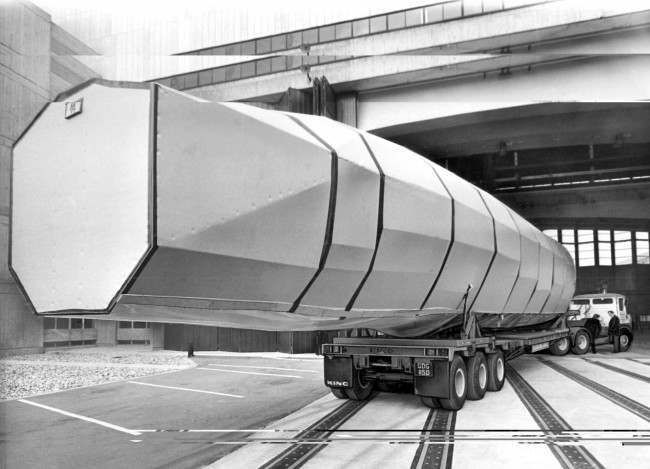 A section of the fuselage assembly of the Anglo-French Concorde airliner, weighing 5 tons and measuring 61 feet in length arriving at the Royal Aircraft establishment at Farnborough, Hampshire, England, April 23, 1967. The section still in its covering, is to undergo extensive stress tests in a special test Chamber at Farnborough. 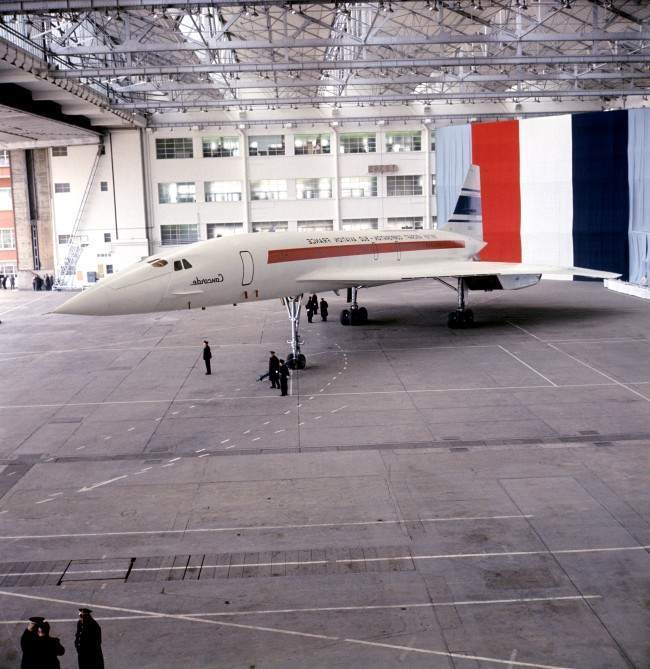 Concorde leaving the hanger for its first public viewing at the Sud Aviation Works in Toulouse. Date: 11/12/1967 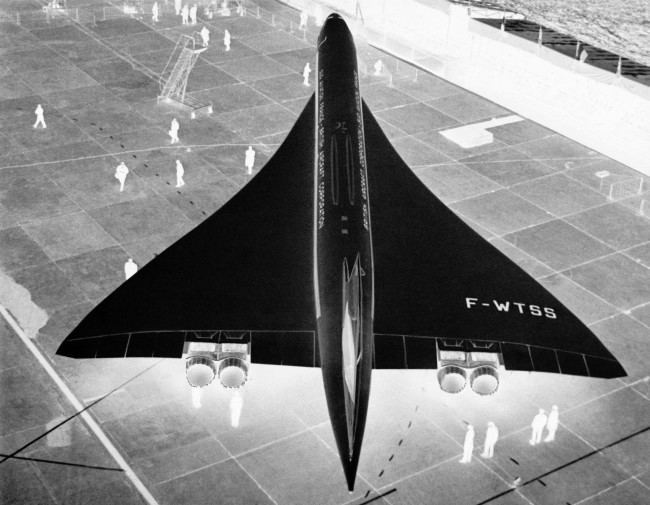 Roll out ceremony for Concorde, a over head shot of the British – French supersonic airliner Concorde during the roll out ceremony of the prototype 001 in Toulouse, France, Dec. 11, 1967. 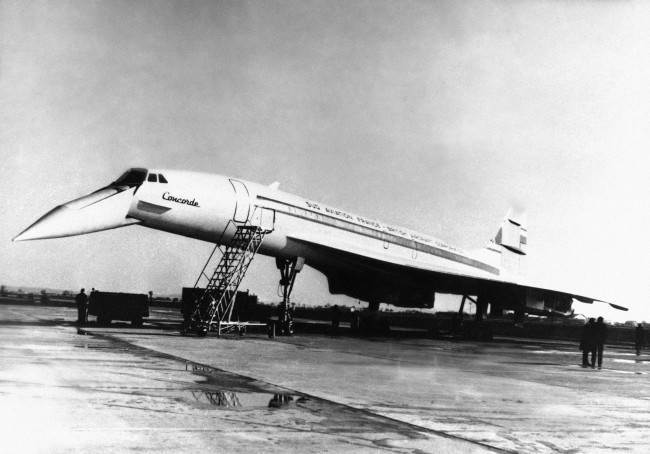 The Concorde, the huge supersonic passenger jet, underwent ground tests at Toulouse, France, Feb. 6, 1968. The tests of the aircraft, a joint of Britain and France, were satisfactory.

The noise from the four Olympus 593 engines, built jointly by the Bristol division of Rolls Royce and the French Snecma organisation, drowned out any noise from the crowd. 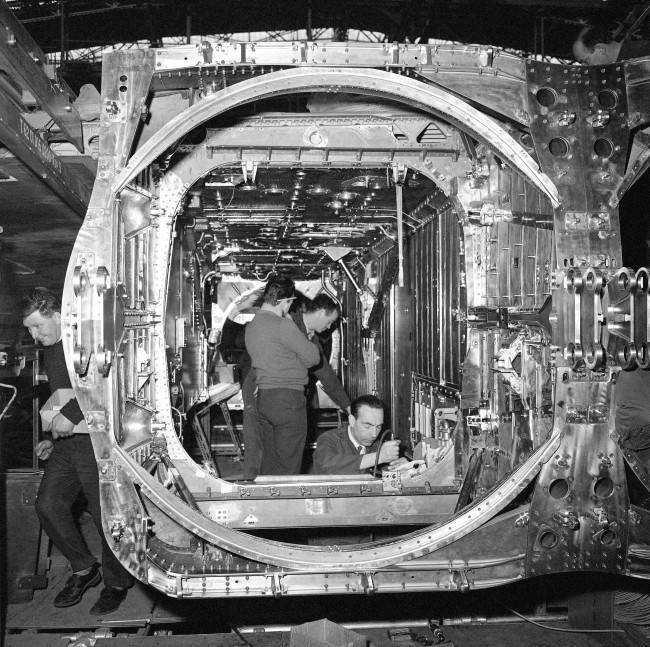 The first British test pilot, Brian Trubshaw (below), who watched today’s flight from the news stand, said, “I was terribly impressed by the way the whole flight was conducted. It was most professional and I would like to congratulate Andre on the way he handled this performance.” 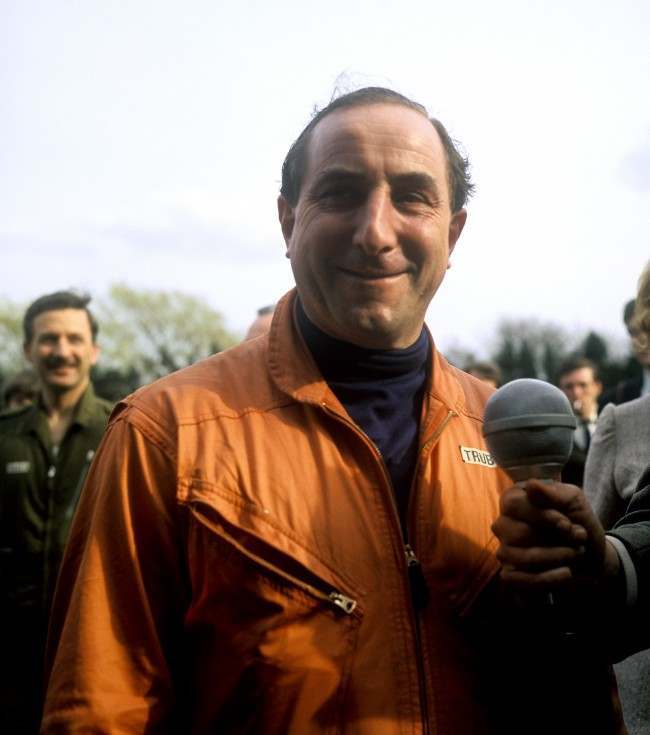 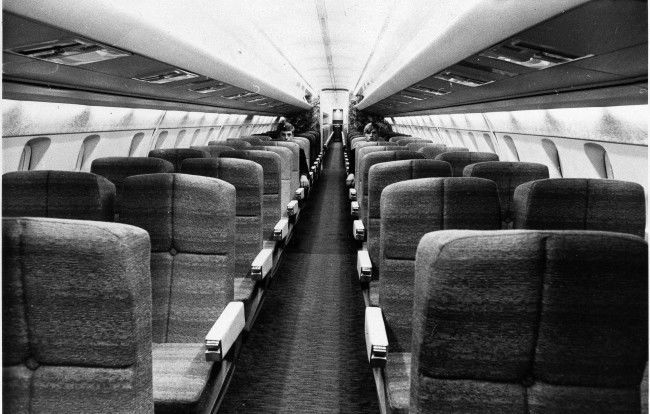 This is a view of the passengers seats section of the Concorde mockup at Filton, England June 8, 1968, where the British Prototype 002 is under construction. The Concorde will accommodate 138 passengers and will fly at a speed of 1,450 mph. the French Prototype 001 is actually under tests in France.

The British government has so far invested £155m in the project. It is hoped Concorde will begin flying commercially in 1973, when it will cut the flying time between London and New York from seven hours 40 minutes to three hours 25 minutes. 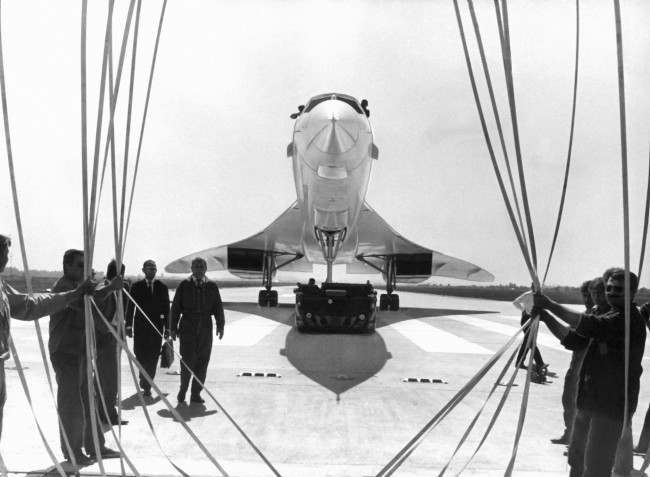 The Concorde prototype of the supersonic plane a Franco-British co-building made it’s first formal taxiing trial, August 21, 1968. The trial carried out on a specially constructed to test the hydraulic and braking systems of the big jet. Concorde nose through security net barrier.

On 9 April 1969, Brian Trubshaw made his first flight in the British-built prototype. The 22 minute flight left from a test runway at Filton near Bristol and landed at RAF Fairford in Gloucestershire.
Concorde completed its first supersonic flight on 1 October 1969. 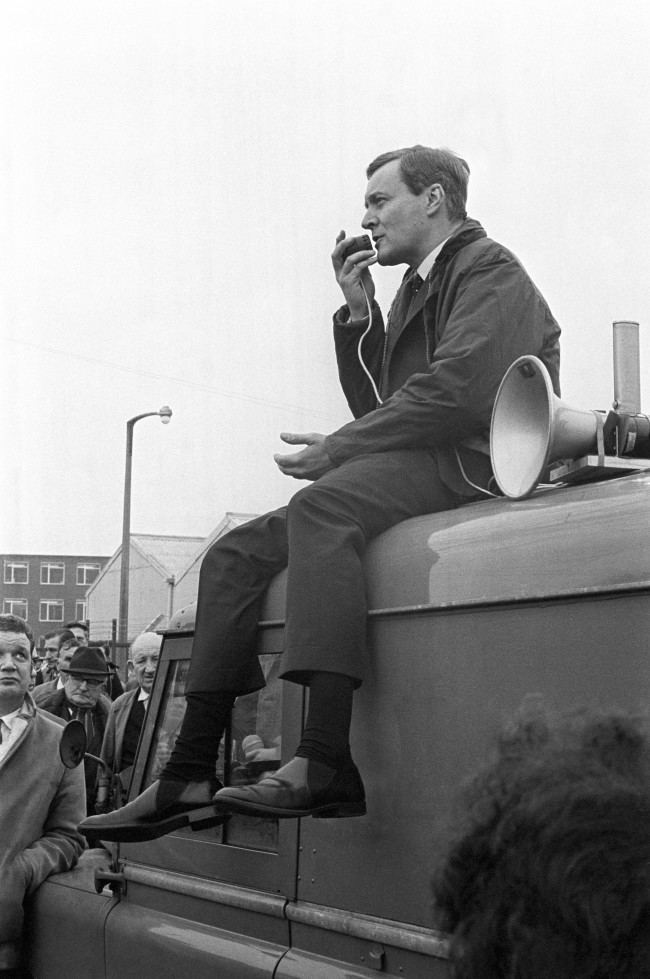 Seated on the roof of a van, Mr. Anthony Wedgwood Benn, the Minister of Technology, uses a loud hailer to address a factory-gate meeting at Rolls Royce Ltd. workers during his visit to bristol to see work in progress on the Anglo-French Concorde project. Speaking to the Rolls Royce workers as they left for their lunch break, the Minister said that “if all goes well and the options taken out are converted into firm orders and world airliners make their orders firm, we shall see not only firm production of the production Concorde but a considerable gain in orders for us and for France.” Date: 24/01/1969 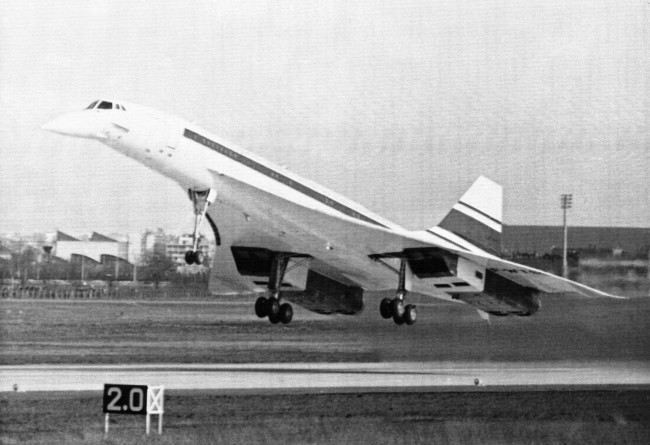 The Concorde supersonic airliner, a joint British-French venture, takes off at Toulouse-Blagnac airport, March 2, 1969 at Toulouse, France, in its maiden flight. The airliner, built to fly at twice the speed of sound, did not exceed 350 mph in its 27 minute flight. British officials hailed the flight as a Soaring Triumph. Although the Concorde is the first western supersonic airliner, a soviet version, the Tupolev 144, made its first flight about two months ago. 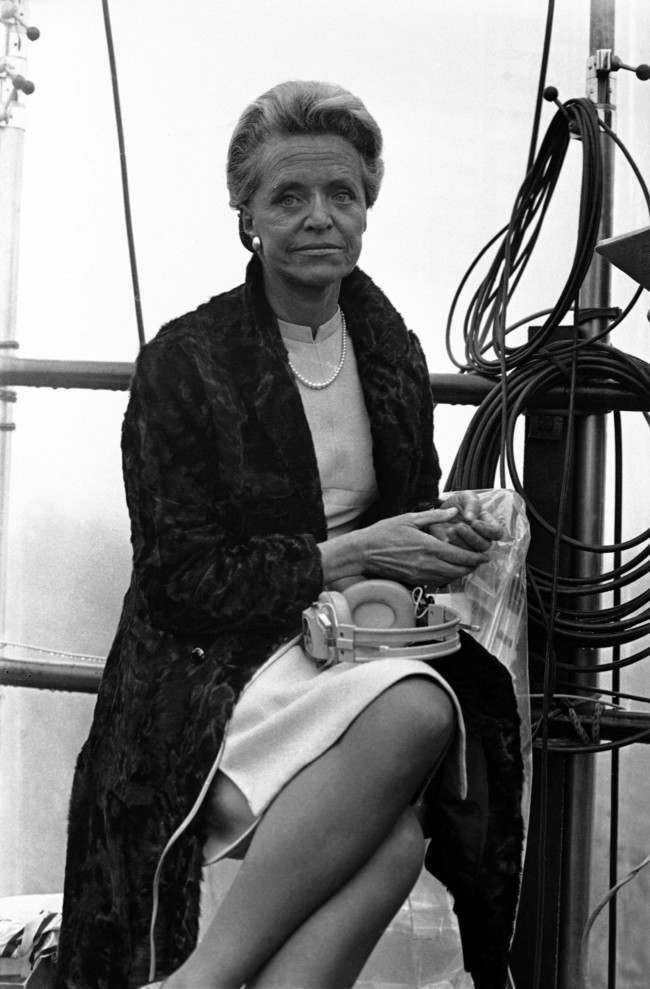 Jacqueline Auriol, daughter-in-law of former French President, and famous woman pilot, sits in the stands for newsmen and photographers at the end of the runway of Toulouse-Blagnac, France, airport on March 2, 1969, while waiting for the takeoff of the Concorde on its first test flight. 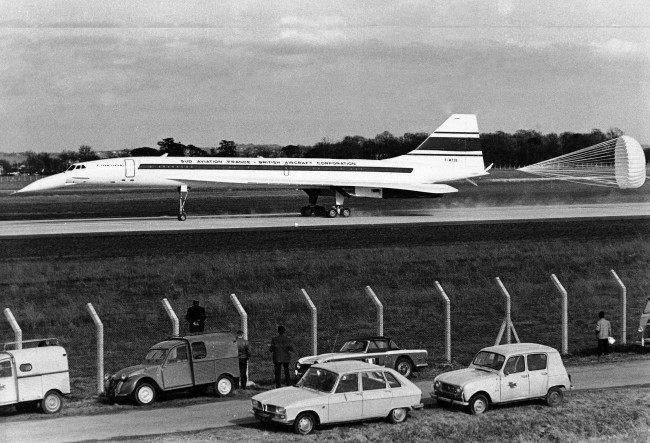 Brake parachute blossoms from tail of the supersonic Concorde airliner as it rolls down runway at the Toulouse-Blagnac Airport in France, March 2, 1969 after a 27-minute maiden test flight. Flight was described as perfect by test pilot Andre Turcat. The plane was the joint product of the British Aircraft Corp., and Sud-Aviation France.