Where does one begin to recount the endless differences between a Christmas around the 1970s versus today? These 5 examples might be a good place to start. 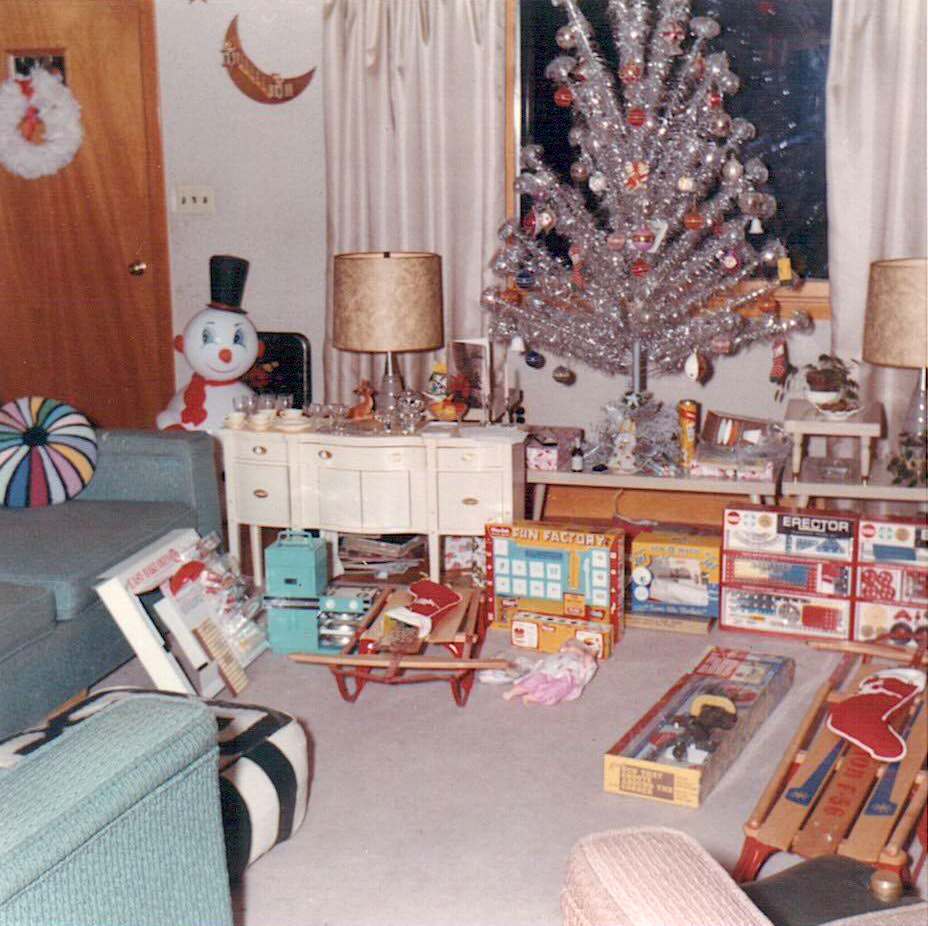 The most obvious difference between Christmas today and those lovely 70s Christmases is the gifting-gone-wild. This is the one aspect that has changed so exponentially, that anyone citing differences must list this as Difference Numero Uno. Seventies kids (even 80s kids) were plenty excited for a handful of presents: a K-Tel record, some Shrinky Dinks, a Stretch Armstrong, and several boxes of lousy clothes would be a Christmas “win” in 1978. Loot of similar scale would rank as a monumental Christmas Fail by today’s standards. 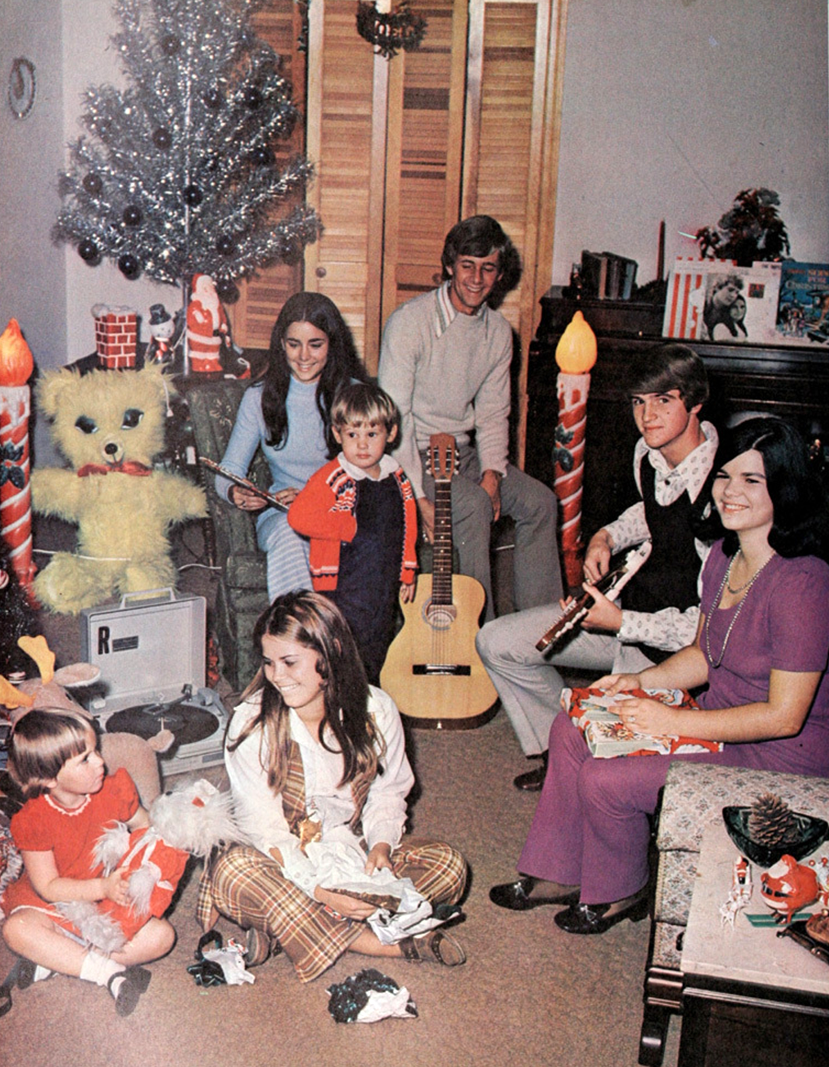 What the hell happened? Parents are no better off than they were back then – it’s not as if we are living in an economic boom. This isn’t Dubai. How did we come to the point where we are obligated to shower our children with an absurd level of presents? Maybe it started with the economic upturn in the 80s and 90s, where parents had a little more disposable income and it became a locomotive that we can’t slow down. Maybe the country’s willingness and ease with which they can get into debt up to their eyeballs has contributed. Maybe our hyper-consumerism and materialism has finally reached its inevitable extreme?

2. Gifting The Whole Year Round

Part of the reason we were happy with our Christmas “pittance” was that we weren’t constantly given shit throughout the whole year. Your crummy Spirograph seems a lot more special Christmas morn when your parents never buy you toys the other 11 months of the year (besides your birthday, of course). 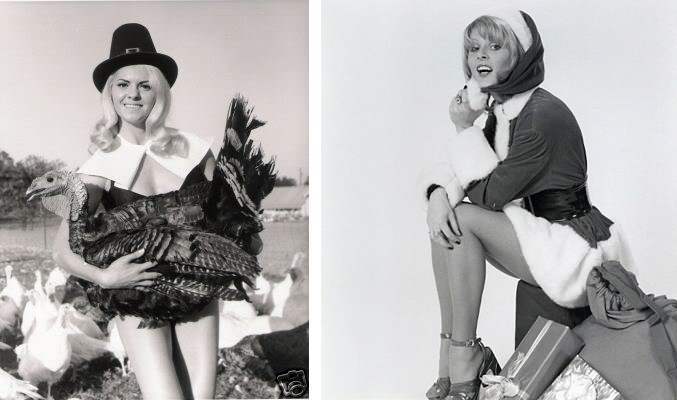 If you blink, you’ll miss Thanksgiving; the shadow of the approaching holiday is nigh…

I think it was the 1990s when we started noticing that Christmas decorations were going up in stores earlier and earlier each year. Something was up. What force was at work compelling Sears and Walgreens to dress up for the holidays as soon as Halloween was through? Obviously, this is a sly scheme to stretch the holiday buying frenzy even longer. 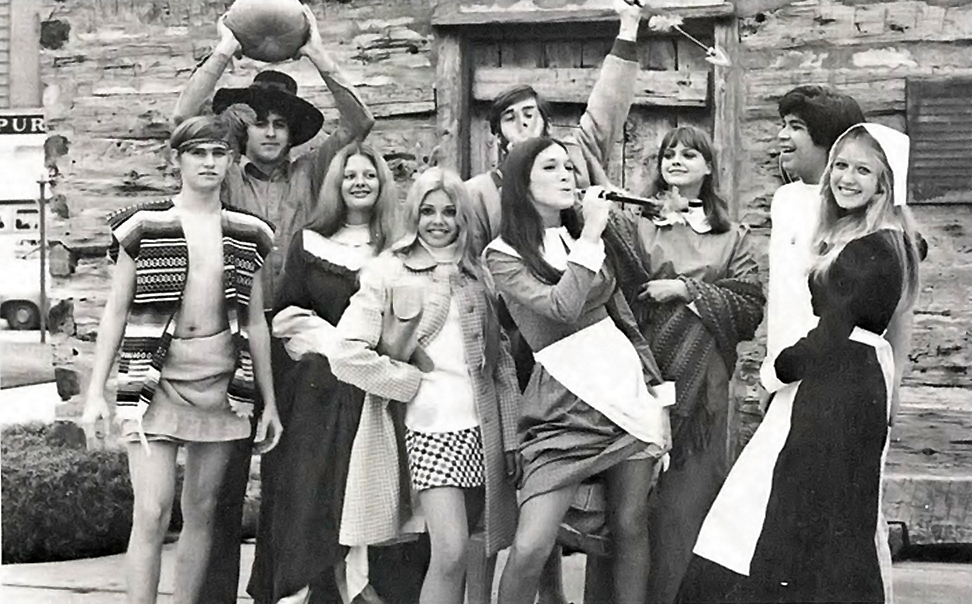 It’s 1974, and these Thanksgiving revelers are still a long way from the Christmas onslaught…. not so today.

An unforeseen effect: People are sick of Christmas by month’s end (as lovely as the holiday is, it still has a shelf life of just a few weeks before the carols, the décor, etc. start getting annoying). It’s not that uncommon for folks to take down the tree on the 26th; whereas, the Christmas spirit lived on in the 1970s till around New Year’s week. 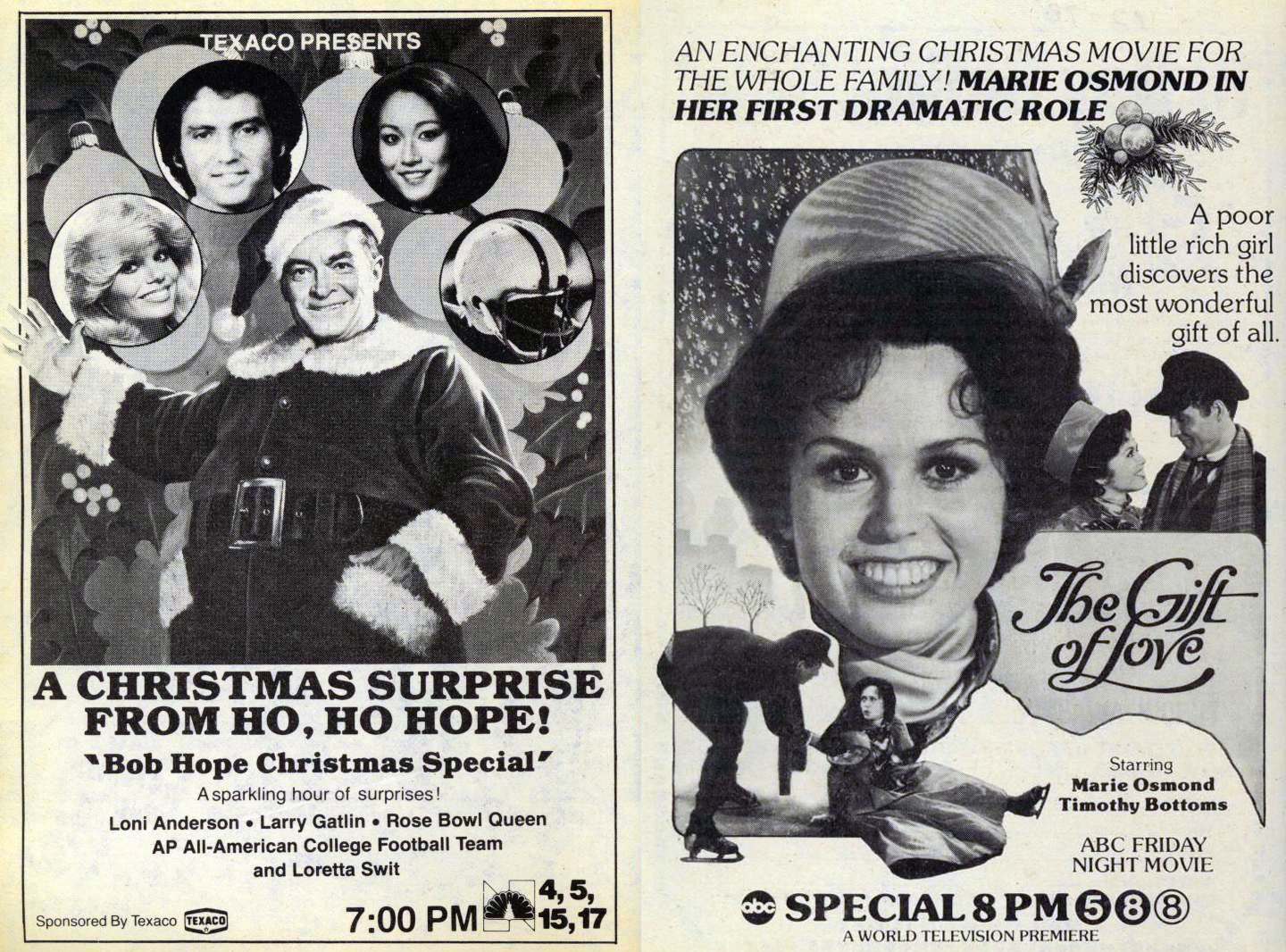 Bob Hope, Loni Anderson, and Hot Lips from M*A*S*H* – it truly is a Christmas miracle

Sure, we still have Christmas TV specials; they’re not extinct yet. However, it used to be a requirement of every sitcom to have a holiday episode. These days, there’s just not as many sitcoms (yet reality shows o’plenty); thus, it’s just not a level playing field. Plus, the sitcoms that we do have only produce 5-6 episodes a year (I exaggerate, but you get my point); so, they’re even less likely to waste a precious episode on a Christmas theme.

Sitcoms aside, the real Christmas scarcity is in the stand-alone specials. Alas, Perry Como and Andy Williams are gone, so we don’t have their reliable, albeit schmaltzy, holiday specials around. But they were by no means the sole holiday offenders: TV was chock full of variety shows and specials. Yes, they were overflowing with acts that probably didn’t appeal to the younger set (ex. Joey Heatherton, Bob Hope), but it was an essential part of the season nonetheless.

But even better were the kid’s specials. We all loved the Charlie Brown special, but there were loads more… but then, something changed and the offerings seemed to get thinner and thinner. I remember a point in the 1990s when I literally couldn’t find a single Rankin-Bass special aired at any time during the holidays! (Thankfully, mankind has since learned to love them once again.) Perhaps, they’ve picked up some, but we’ve nowhere near reached the Christmas TV saturation levels we once experienced in the 1970s.

5. I’m Dreaming of a Polyester Christmas 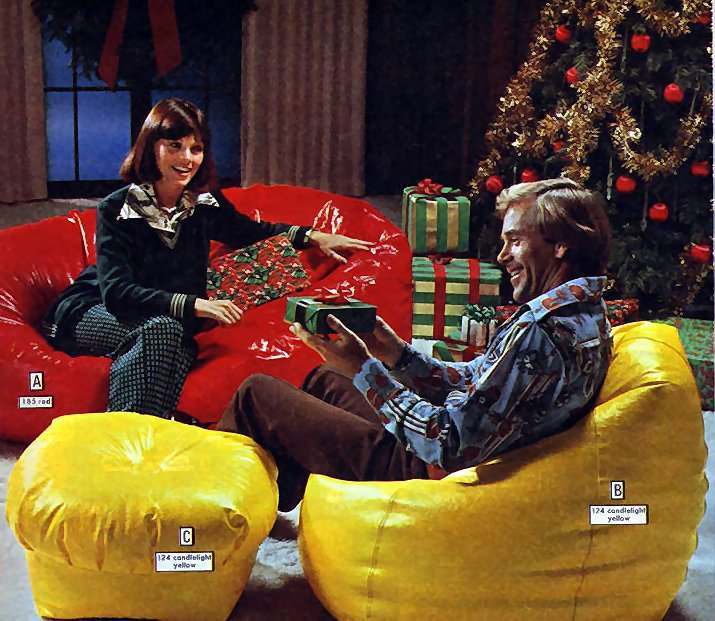 Like most things in the 1970s, the tacky factor was kicked up a notch. Everything has to be so neat and perfect now – in the 70s, Christmas was gaudy. The trees were draped with popcorn garlands (remember those?) or, worse, they were sprayed with flocking – yes, Christmas in the disco decade was quite literally, frocked. 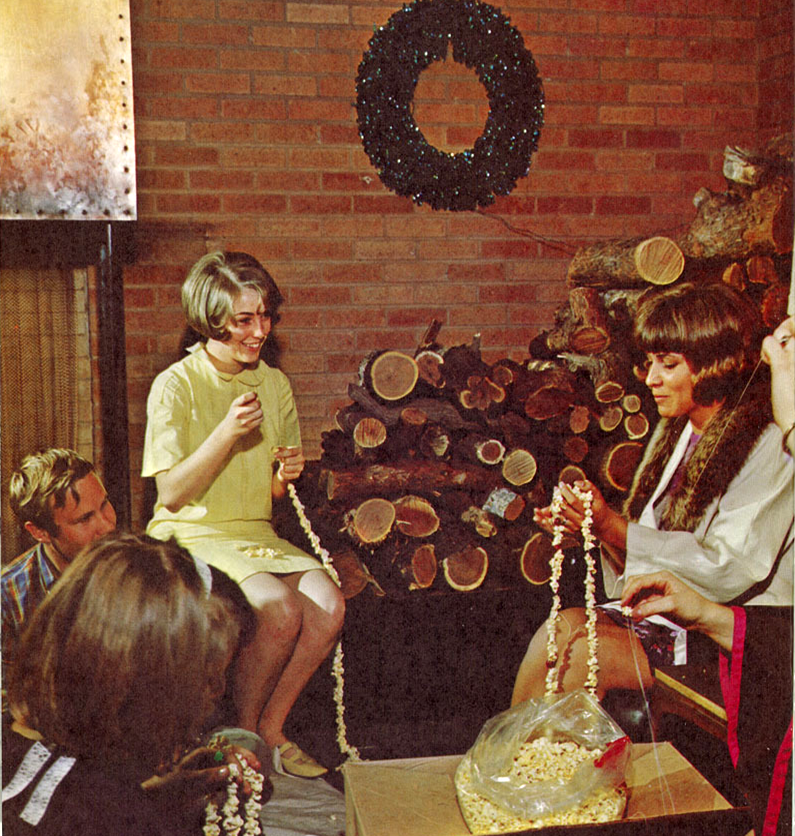 Oh, the popcorn garlands. Ever the favorite.

As any Polaroid from the a 1970s Christmas will testify, homes were bedecked with a hodgepodge of Christmas crafts. Families rarely spent big bucks on store-bought décor. Most were homemade No LED lights and tastefully arranged decorations worthy of Martha Stewart – we’re talking pantyhose snowmen, macramé wall hangings, popsicle stick reindeer, and construction paper snowflakes. And don’t get me started on what we were actually wearing. 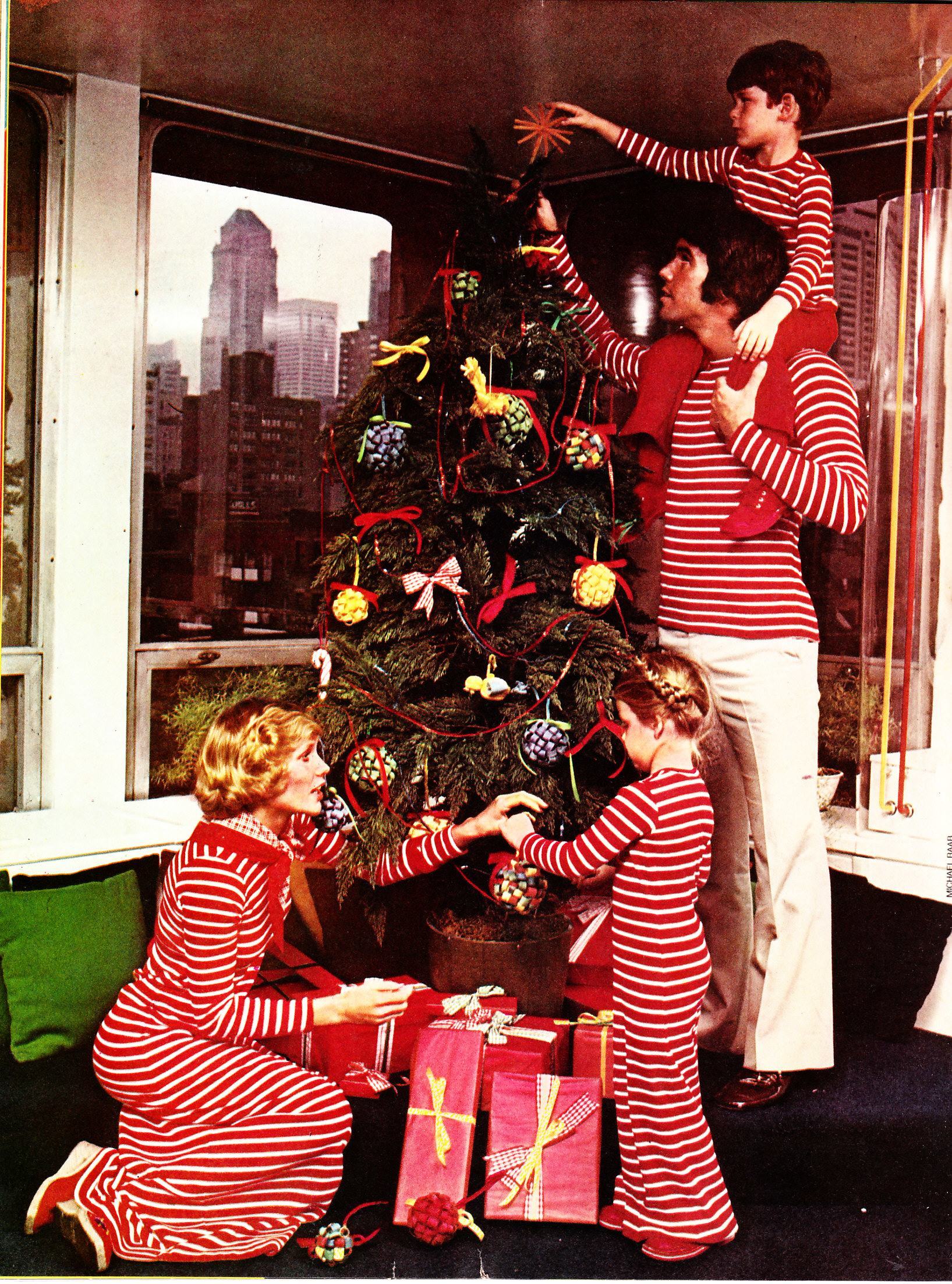