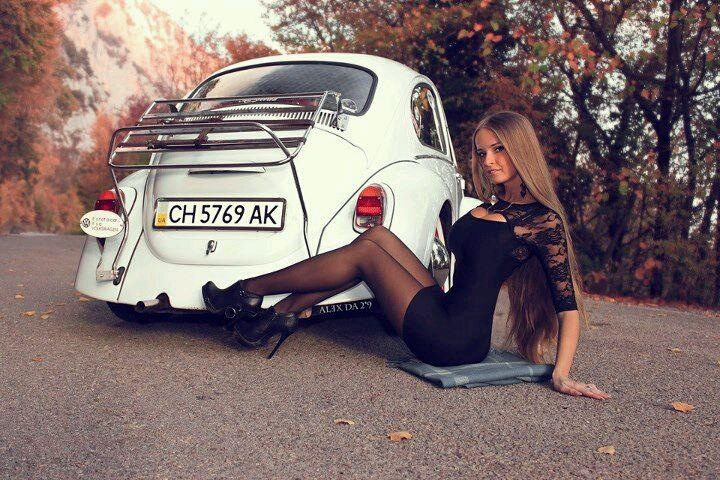 As far as inanimate mechanical objects go, the car has got to be the top when it comes to being associated with coolness and verility. Perhaps, only the electric guitar and motorcycle can top it. Sure, you’ve got your “chick repellents” like the Brady Bunch station wagons and AMC Pacers; however, these are easily countered by a 1966 Pontiac GTO or James Bond’s Alpha Romeo GTV6, which literally do not need gas to run, but rather are powered by their own raw sexual energy. 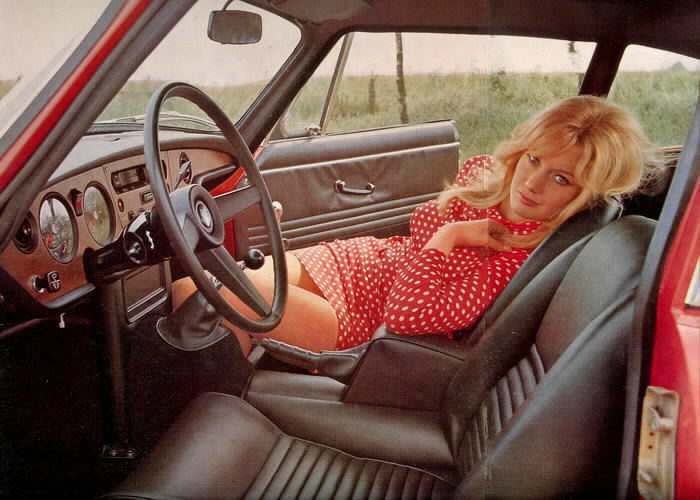 This is especially true for the muscle car. Harken back to your high school days: even the goofiest guy could get the grooviest chicks if he drove a badass Plymouth Barracuda. Indeed, the sexual power inherent in these vehicles is so intense that some say that if a hybrid minivan comes into contact with a 70s muscle car, it will have a sort-of matter-antimatter reaction, literally creating a tear in the universe. (Don’t try this experiment at home, kids.) 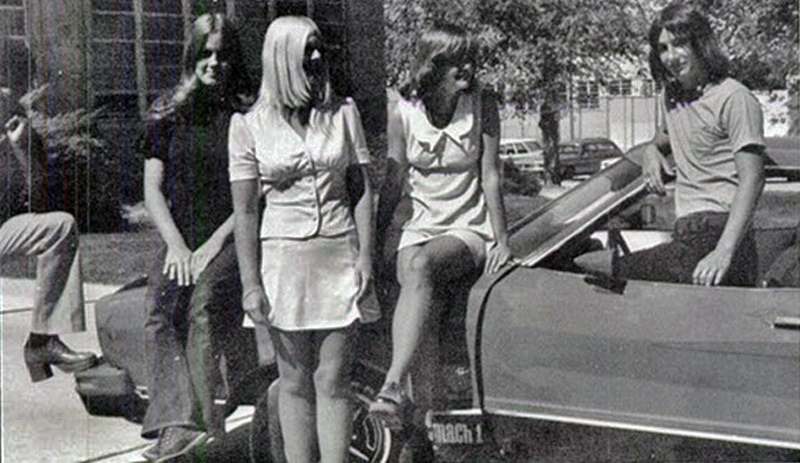 Let the photograph above illustrate: even the lamest dudes had no problems with the ladies, as long as their ride was lookin’ good.

Muscle cars in the 1970s were serious business for the high school set.  Take  note of Mathew McConaughey words as Wooderson in Dazed and Confused regarding his muscle car Melba Toast: 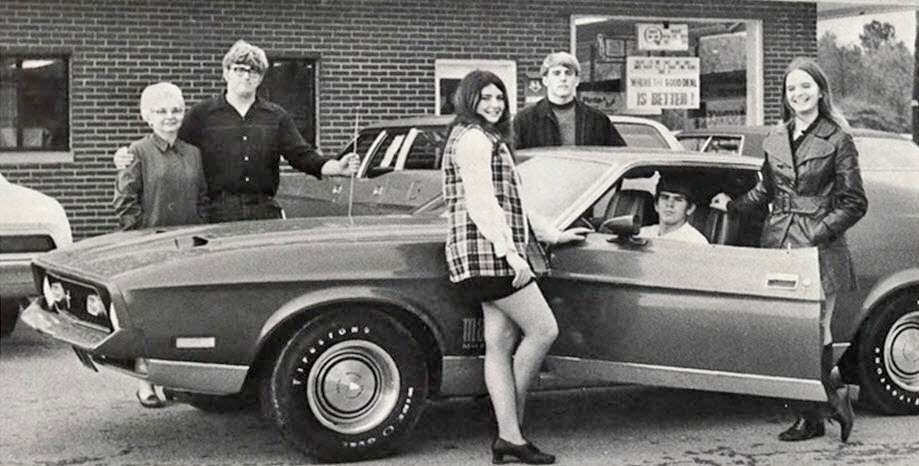 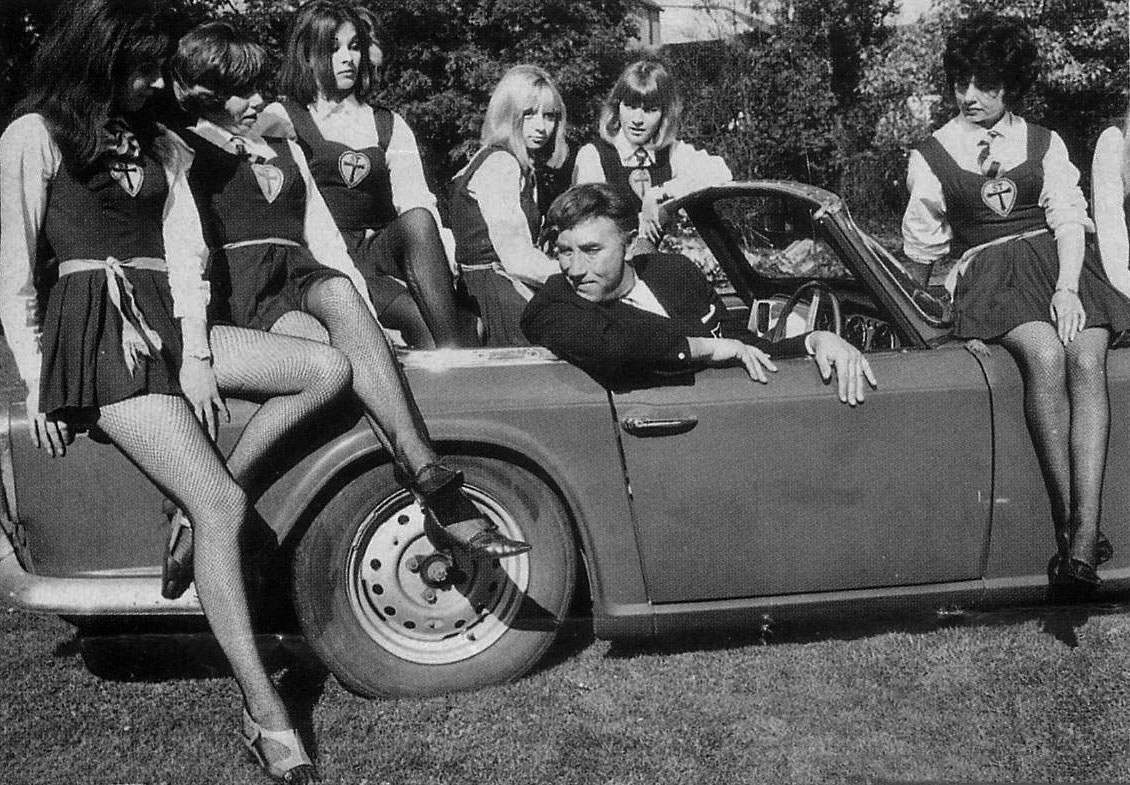 The only downside to these chick magnets was where to stow all the chicks?  A sports car amid the Sexual Revolution was a force to be reckoned with. 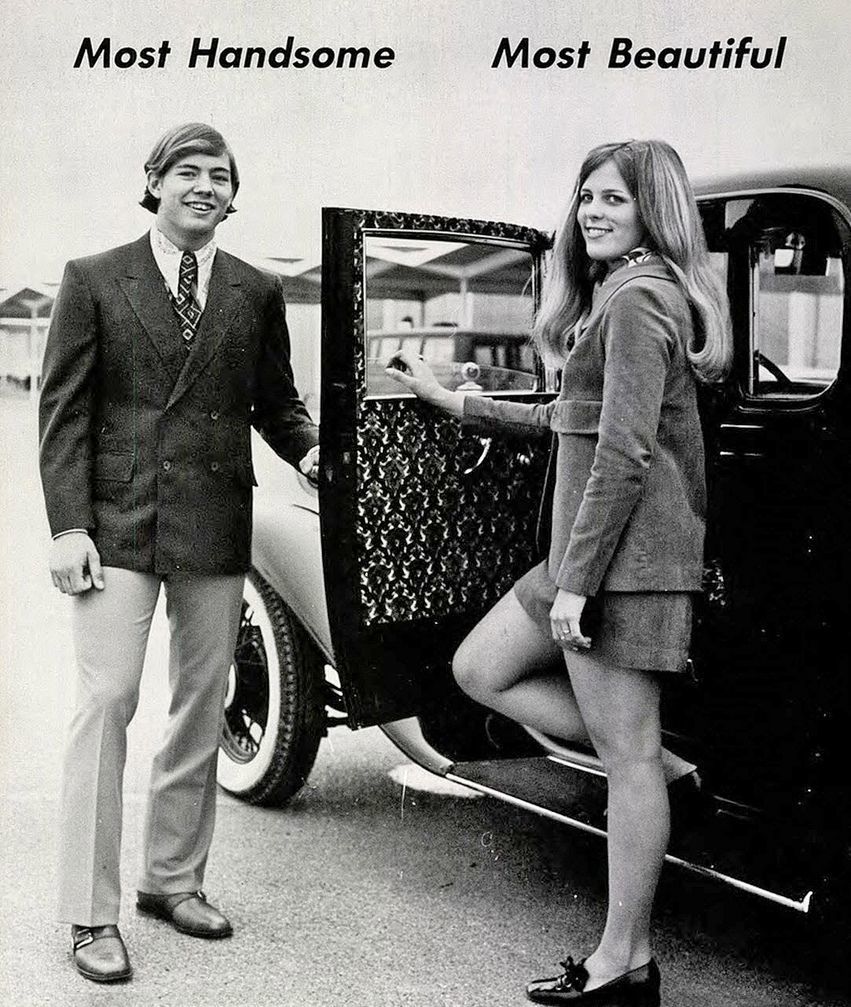 From a 1970s High School Yearbook

I feel pretty confident in saying his bitchin’ car had a role to play in him being elected “Most Handsome”. 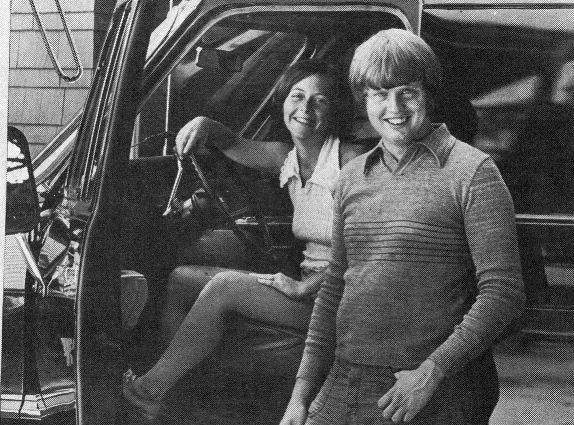 A curious “found photo”.  This guy is exhibiting what is commonly referred to as the “slasher smile” (see A Clockwork Orange every time Alex gets ready for a bit of ‘ultraviolence’). This girl is obviously going to die shortly thereafter… but it never would’ve happened had he not lured her in with his chick magnet. 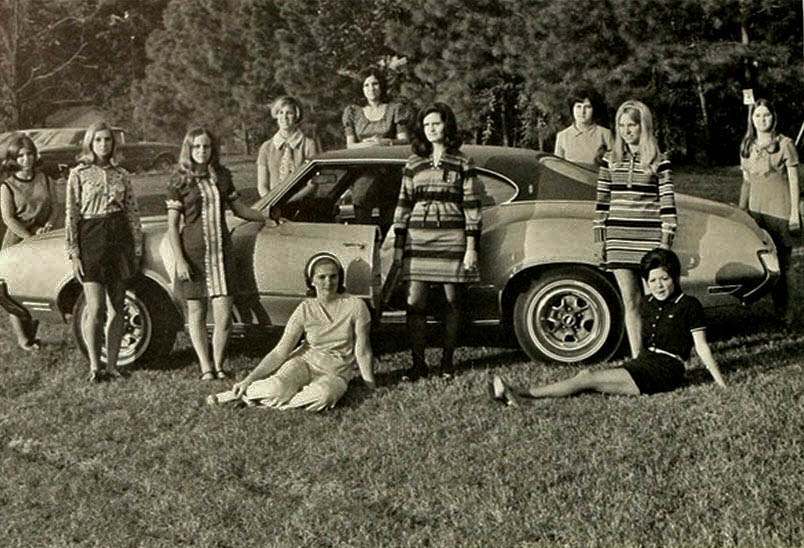 The owner of this vehicle innocently parked his car, only to come back a few minutes later and find it surrounded by chicks.  The poor sap spent hours clearing them away.

A common problem for the 1970s car owner…

At first glance it looks like a problem we’d all love to have… but he really needs to get home, and he can’t even close the door. 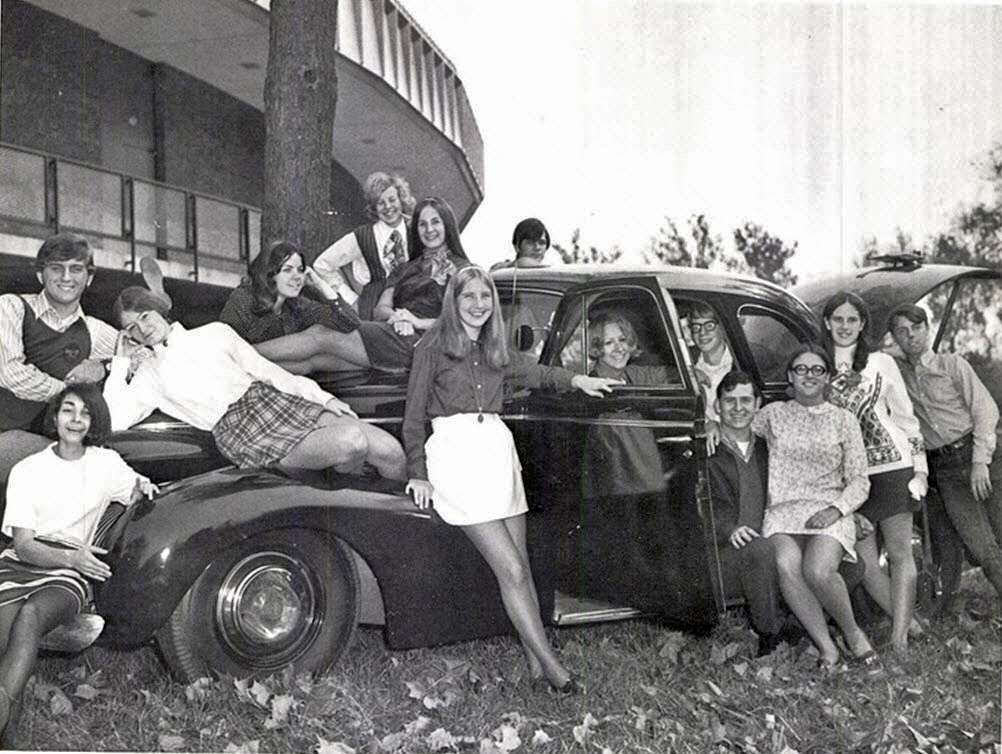 Let’s bow our heads for a moment to remember when cars were made of heavy steel and half a dozen people could lay/sit/walk all over them without fear of denting the body. 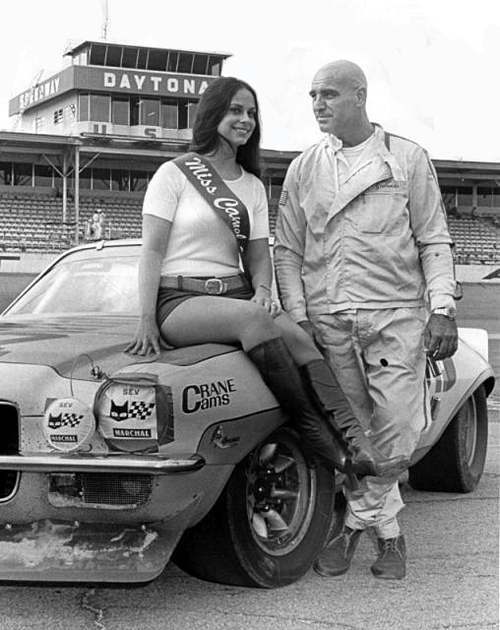 It’s one thing to own a cool car, it’s altogether another to drive that sonuvabitch really, really fast. Speed kills, but it will also get you laid….. so, basically it’s a trade-off. Steve McQueen and James Dean both raced with the devil, and it eventually caught up with them…. but not before they banged tons of chicks. 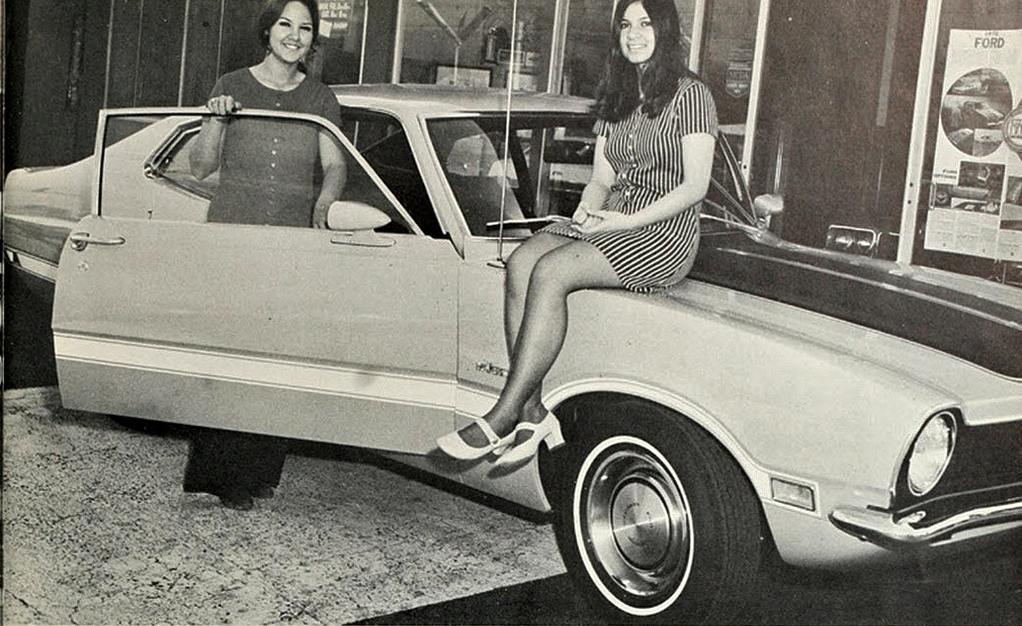 Guess how much a brand new Maverick Grabber cost in 1970. This will make you absolutely sick – are you ready? Base Price: $1995. Adjusted for inflation that equals just $12,238. WTF? No wonder everyone is in debt up to their eyeballs. 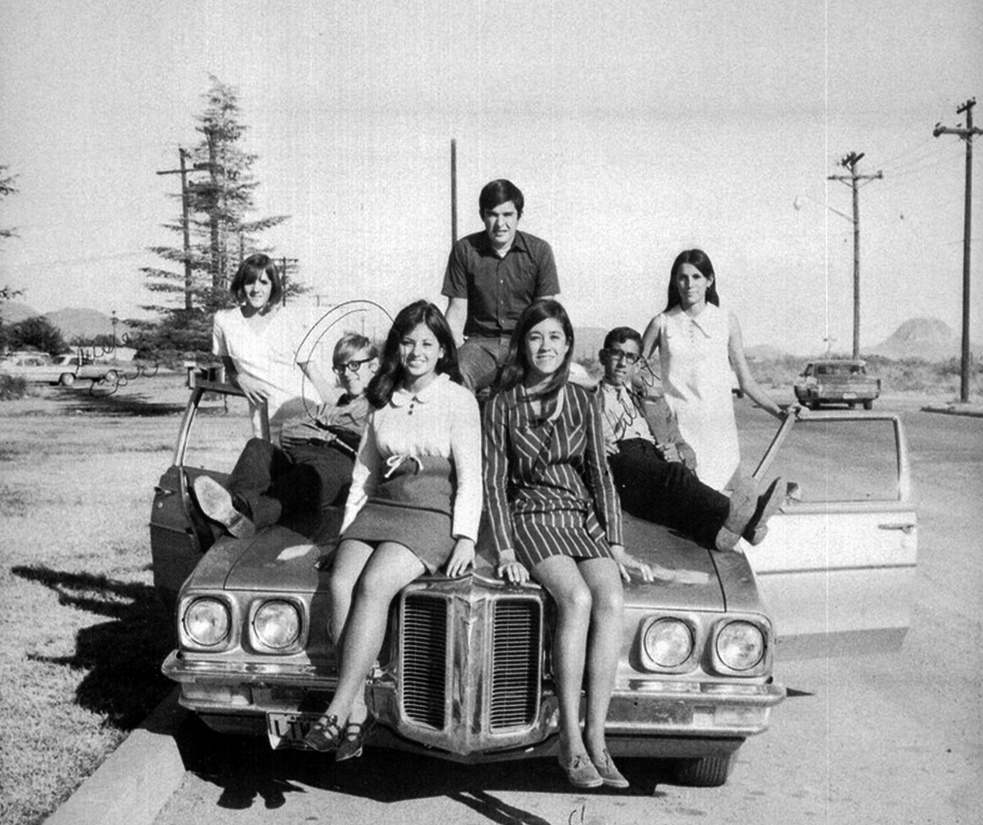 What are the all time greatest chick magnets?  I think the winner would have to come from the list below: 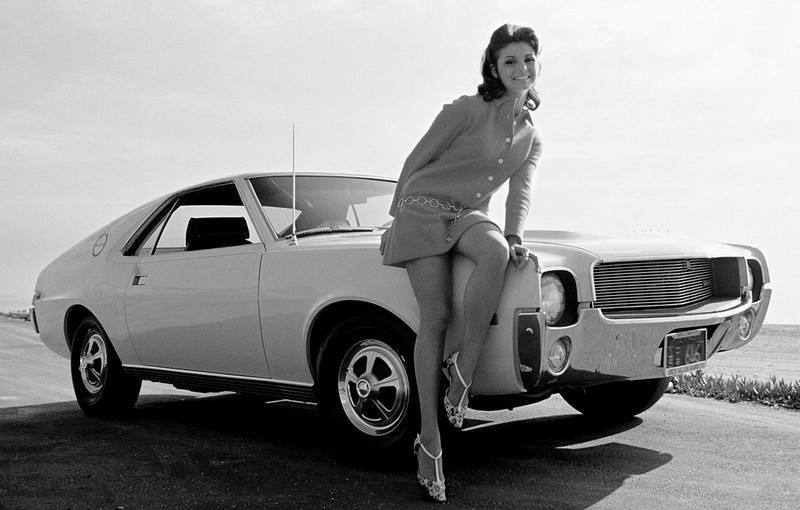 There’s something about that design – even when it’s sitting in a parking lot, it looks like it’s hauling ass at 100 mph. 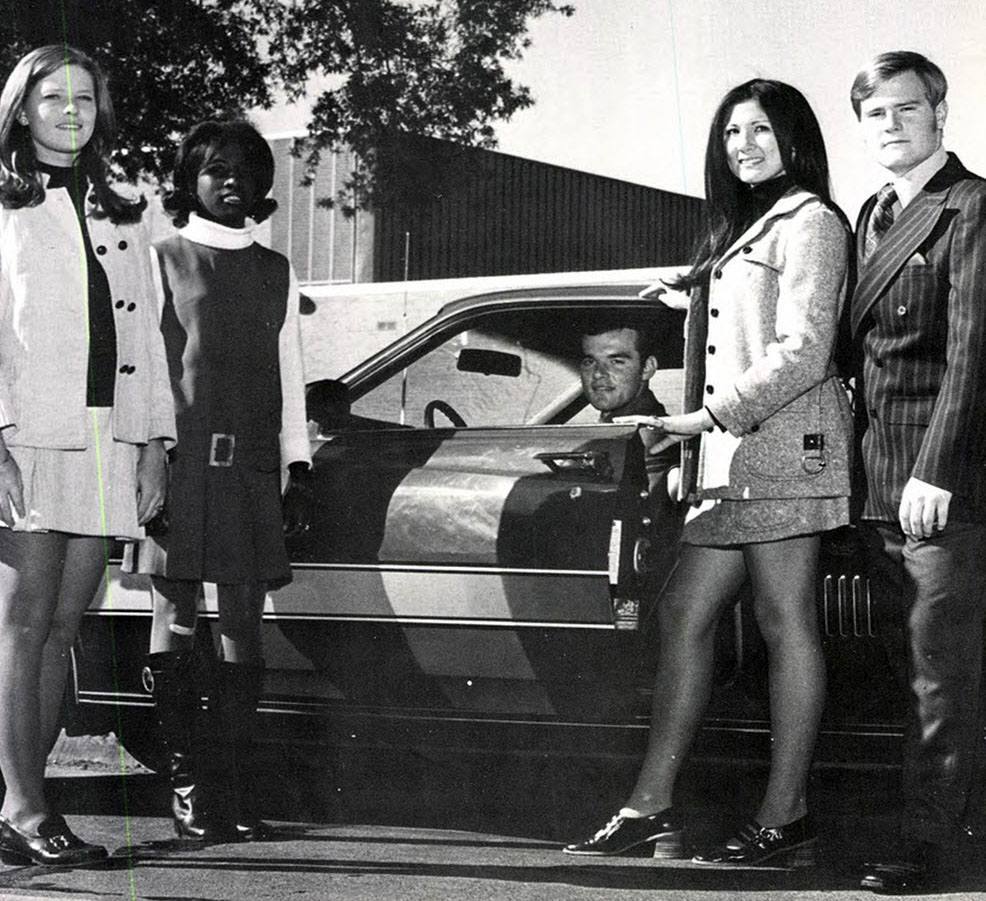 The driver wears the expression of one who knows exactly how good he’s got it. 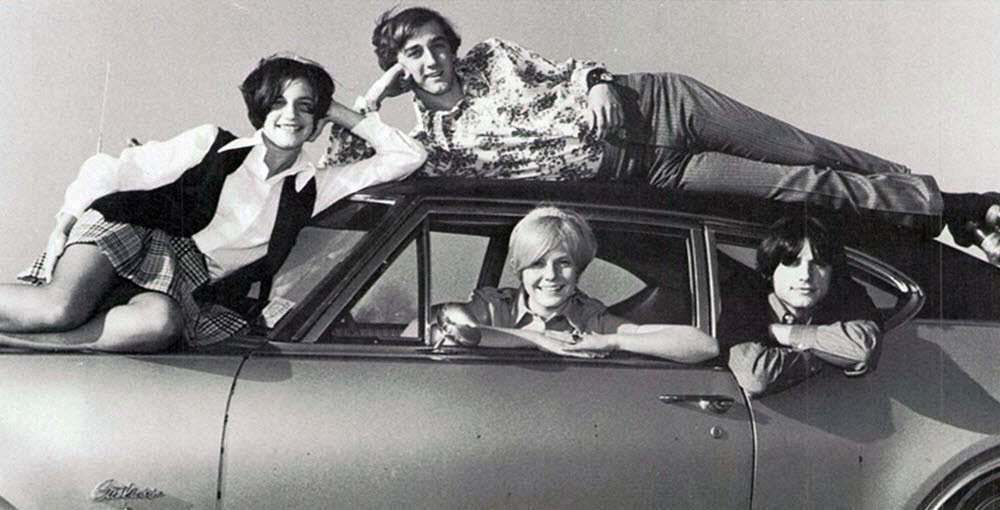 Although highly unusual, males have also been known to drape themselves on automobiles as well. Needless to say, the sight of a young man spread out atop an Oldsmobile Cutlass isn’t exactly pleasing to the eye. 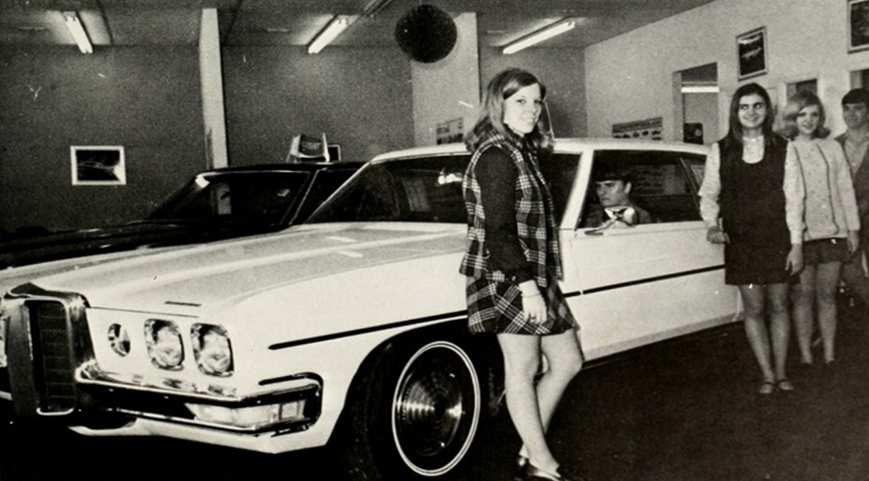 Ladies are literally lining up to fraternize with this lucky driver, as if compelled by some unseen magnetic attraction.  Wait – there’s appears to be a guy in line as well… things may take an unexpected turn. 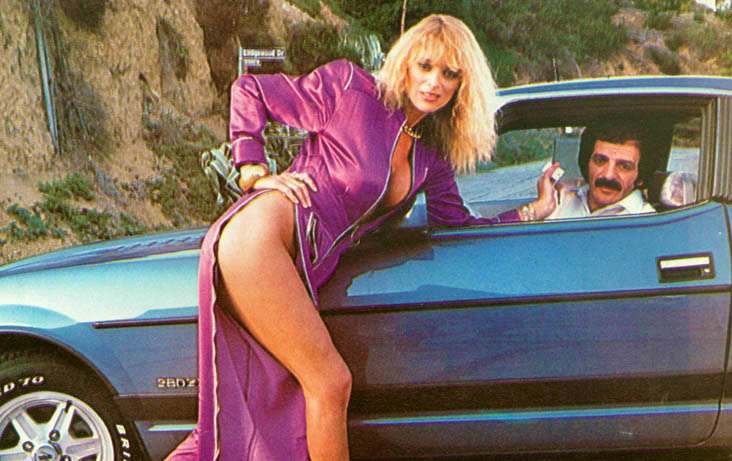 Okay, if this schlub can attract Sibyl Danning with his Datsun 280Z, then we finally have definitive proof that sports cars do possess magic powers. Any doubts at this point are unfounded, and all arguments are hereby invalid. We can all go home now.