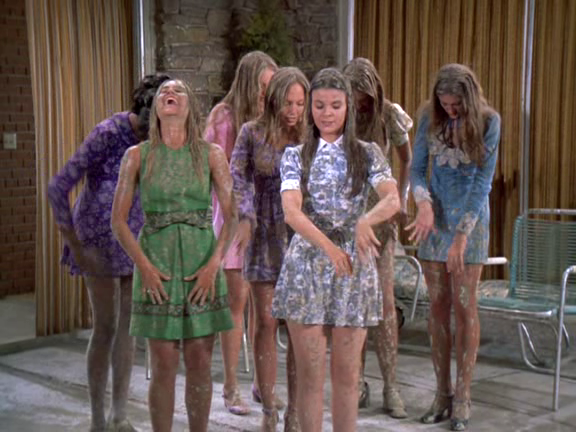 I joined the science club at school, and I’m building a volcano. When I’m finished, I can make it erupt. And when it erupts, smoke’s going to come out, and real molten lava’s going to ooze all over the place.
– Peter Brady

When it comes to TV episodes with an underlying sexual connotation, there’s nothing more Freudian than The Brady Bunch episode “Today I am a Freshman” (1972).  It’s the one where Peter’s “volcano” spews a load all over a gaggle of girls in short skirts.

It might be a completely innocent story line with no intended subtext; but there’s a case to be made that there’s some underlying meaning as well.  To make the case, I have hired a professional Armchair Psychiatrist, Dr. Max Phallus to interpret the meaning. 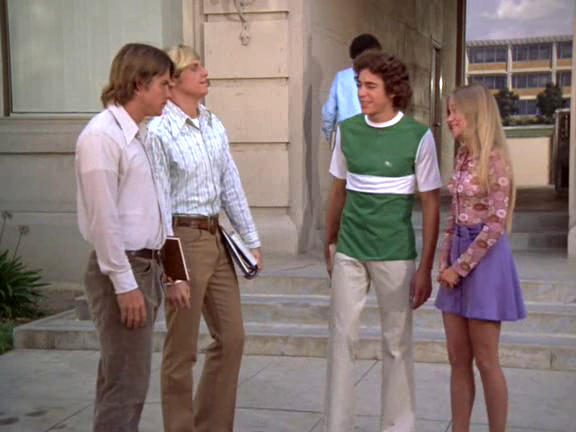 Marcia is a freshman, and pretty insecure about entering high school.  Greg tries to introduce her to some of his friends, but she just embarrasses herself by trying to act overly mature.  At one point she tells them: “I’m looking forward to the intellectual stimulation.”

Dr. Phallus: Marcia is no longer a girl.  She is now a young woman, and she wants the young men to recognize that she is a sexually mature female. 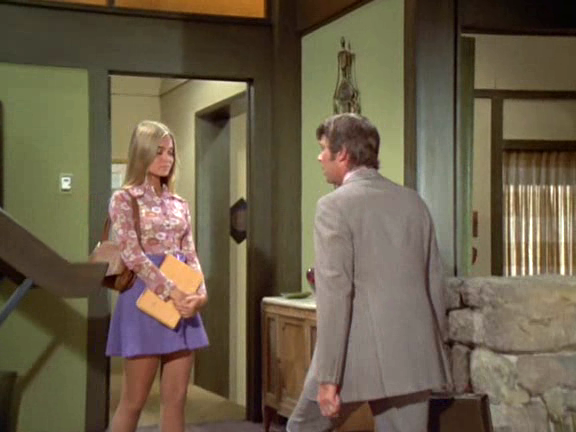 Marcia admits to her mother and father that morning that “she’s afraid”.  After school she tells her father that things went terribly at school.

Dr. Phallus: The journey from childhood to womanhood can be a painful one.  Self doubt and insecurities are part of the transition. 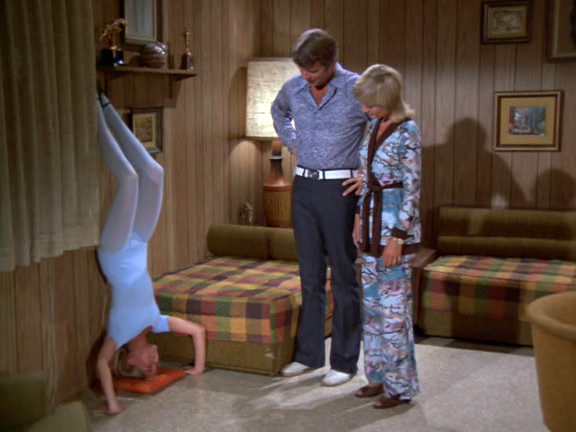 Marcia joins some clubs to fit in with her peers.  Her parents catch her practicing for the Yoga Club by doing a headstand in a leotard.

Dr. Phallus:  It’s only natural that Marcia would shed her clothes and get in touch with her body. Her parents catching her in the act and the resulting awkwardness is highly indicative of an early masturbatory experience, and the guilt that follows.  A poignant scene. 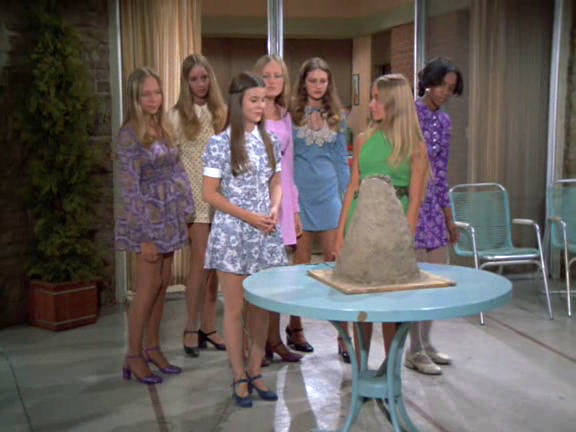 Finally, we reach the volcano scene.  Marcia invites the Booster Club to hold a meeting on her patio.  It so happens that Peter’s science experiment is also set up in the area.

Dr. Phallus:  The way the young women surround this phallic symbol is one of the most sexually suggestive moments in television history.  This is not just a volcano, this is without question an erect penis. 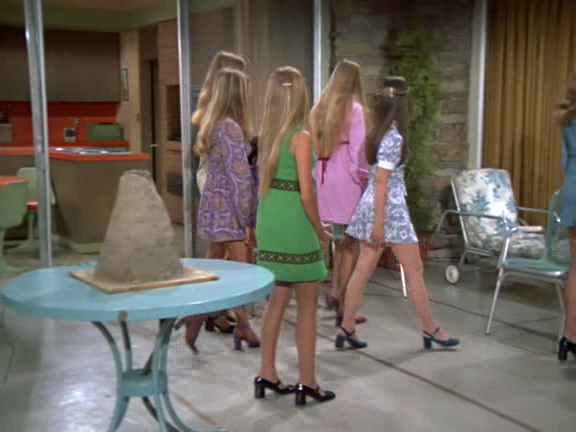 The Booster Club disapproves of having this in their presence.  At one point the club president states: “It looks so…. dirty.” Eventually, Marcia convinces them that it’s okay to share the patio with this “harmless” object.

Dr. Phallus:  It is very telling when the club president declares that this is a “dirty” thing. Why are they appalled by it? Why do they label it as dirty?  These feelings are quite common in the early stages of womanhood toward the male genitalia. 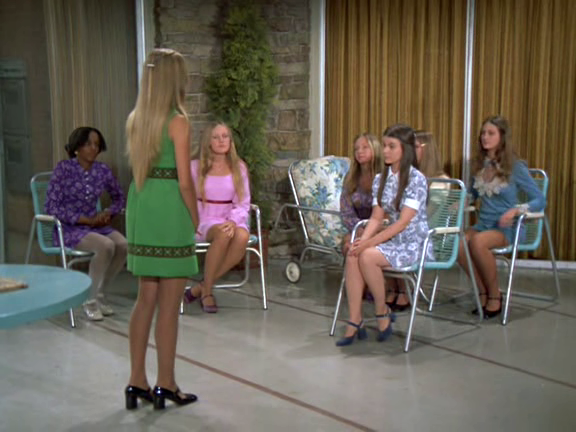 The Booster Club votes to approve Marcia for admittance into their club.

Dr. Phallus:  It is made clear that The Booster Club is the “mature club”; this is the one Marcia wants most of all because it is the “in crowd”.  Thus, when they announce that Marcia is now a member, we can infer that Marcia is now officially a woman – no longer a child.  This is a big moment… given special significance with a large erect penis only a few feet behind her. 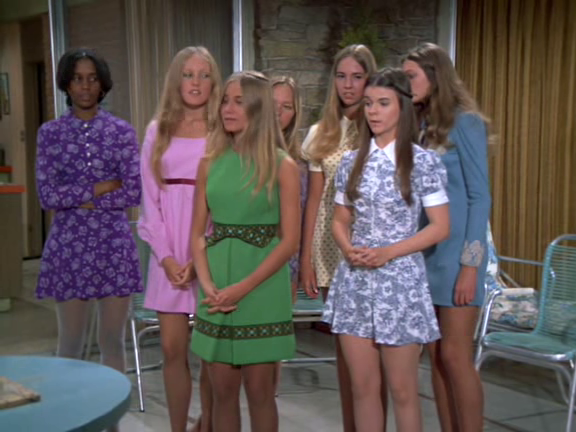 Peter returns to his science project to test it out.  He beckons the The Booster Club to come over and watch.  Despite their reservations, the club is quick to gather round and watch.

Dr. Phallus: A perfect depiction of feminine sexual curiosity.  They are women now, but the idea of sex is still riddled with fear, anxiety, but most of all – curiosity. 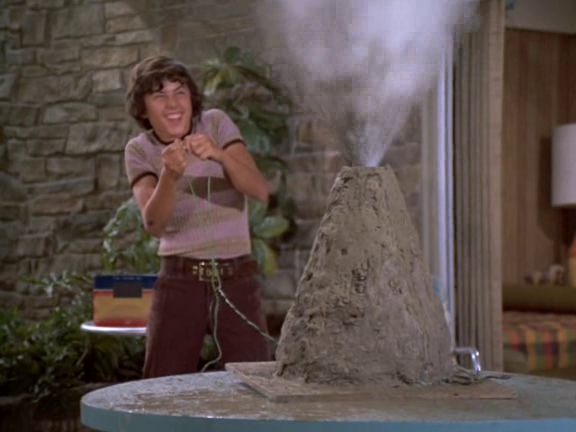 Peter connects the wires, igniting his volcano.  He exclaims: “It works. It works! Now watch the lava ooze out!”

Dr. Phallus:  It is fitting that this is Peter’s project.  Not only because of his name, but that he is a male of comparable age.  If this had been Jan or Bobby’s project, the allegory would have been weakened.  You can also transfer the focus if you wish to Peter himself, and his own sexual awakening. 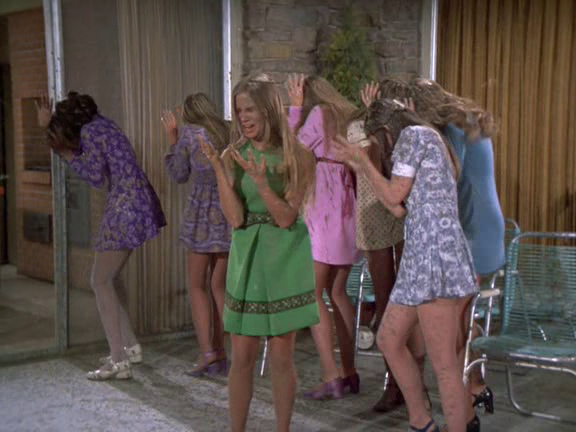 Peter’s volcano rains sludge all over The Booster Club.  The girls scream and flail around.

Dr. Phallus:  The erect penis sprays the girls with its contents.  You don’t need a psychiatrist to interpret this one. It’s a given that these young women are experiencing sex for the first time – my interest is in their reactions.  At first, they all are surprised and horrified, but as Peter’s payload continues to rain down on these scantily clad females, their behavior begins to change…. 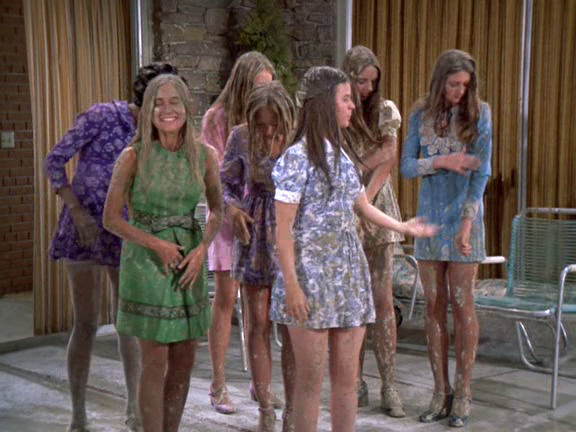 The Booster Club is disgusted by the event, but Marcia is laughing.  So, she is summarily ejected from the club.

Dr. Phallus:  It’s obvious the club girls found no joy in the experience, or they did but refuse to admit it. Whereas Marcia plainly had a great time.  Every woman’s first sexual experience is her own.  In other words, she may relish the experience, or she may feel guilty for enjoying it – it depends on the person’s upbringing.  Marcia recognizes that the penis and its ejaculate are nothing to be afraid of; so she embraces it. 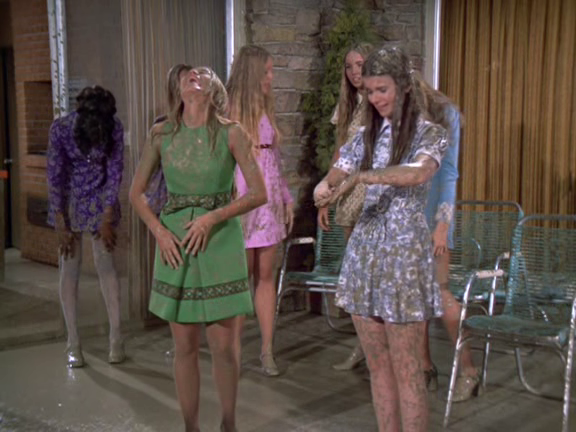 Peter, himself, is surprised that it worked.  Alice likens it to Mount Vesuvius.  The Booster Club leaves the premises, while Marcia continues to laugh with delight.

Dr. Phallus:  All men can empathize with Peter, who seems shocked that his “equipment” worked.  But this is Marcia’s tale, and she has walked away from her first sexual encounter full of joy.  Mr. and Mrs. Brady obviously are the type of parents to not handicap her with feelings of remorse.  She is able to experience it as it should be experienced – without the guilt and condescension which the club members hold. This episode should be required viewing for all students entering middle school. 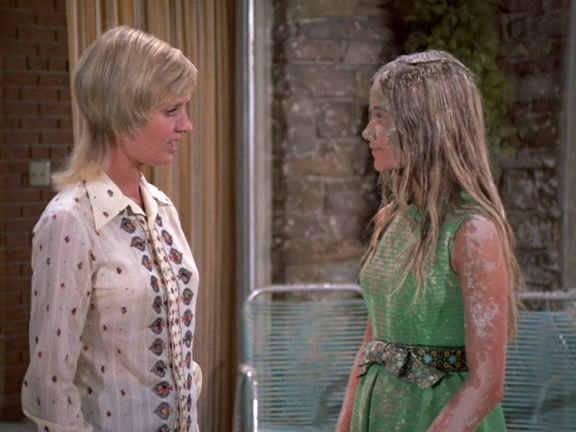 Perhaps the best moment of all is at the bitter end, when Mrs. Brady says:

“Just be yourself and you’ll be popular……. Dirty, but popular.”