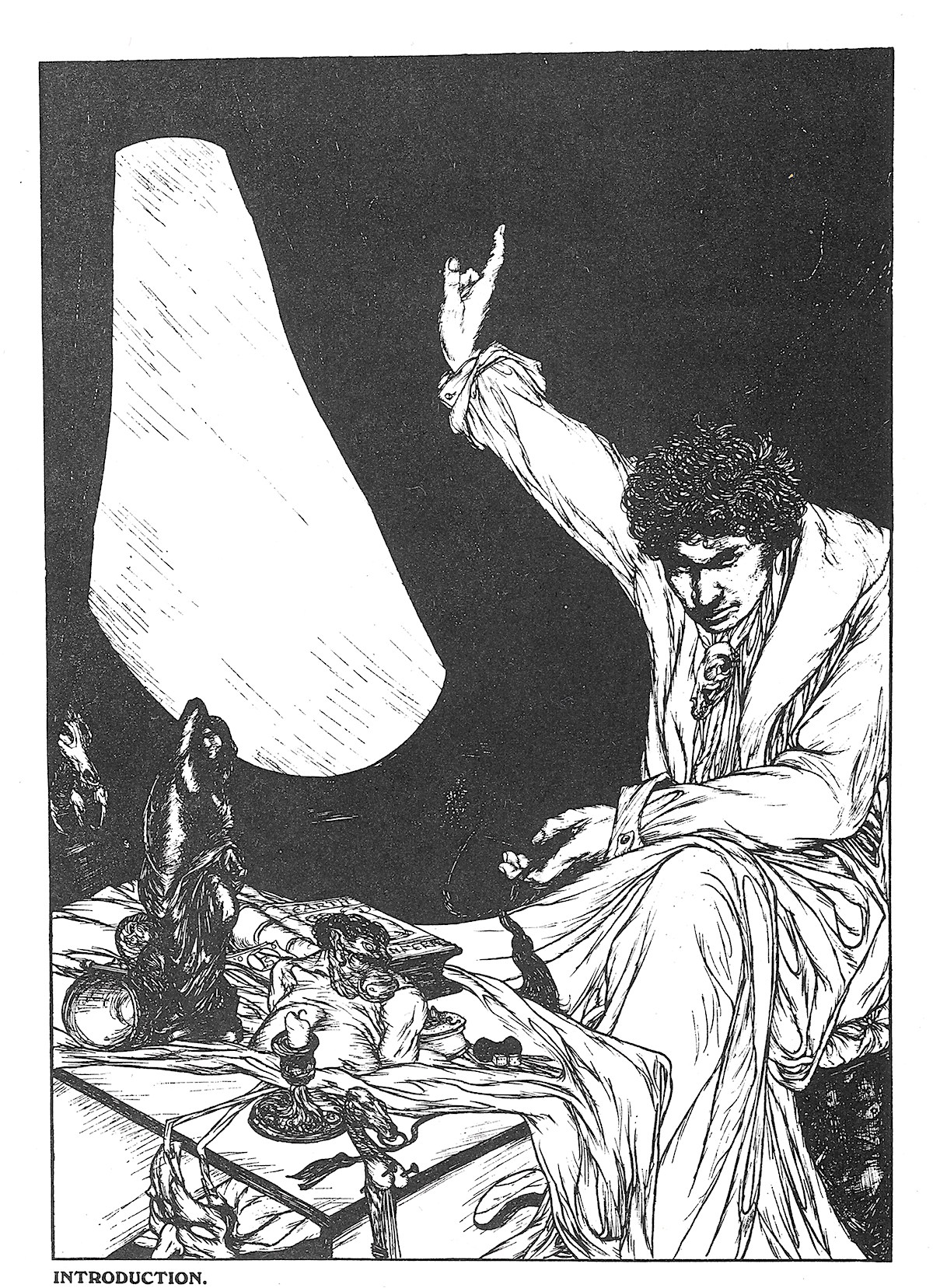 Let’s imagine you are standing in the hallway of some large dark house–black-and-white tiles, wood-panelling, portraits hung on its walls. Ahead of you are two doors above which is a sign that states:

“One of these doors will lead you to untold riches of gold and diamonds and precious gems. The other, leads to enlightenment.

“Which door will you choose?”

You examine the doors. One is rough hewn, splintered timbers studded with dull bolts and a rusty hoop of a handle.

The other is golden, jewel-encrusted, glittering and beautiful.

You make your choice.

Once over the threshold you enter a bare room in which there is another sign:

“You have chosen the wrong door. You are now enlightened.”

That’s how magic works. The promise of its power is always greater than the reality. Any failure to gain what was desired through magic is seen as enlightenment. Practitioners will return again and again in the hope that the next time they will choose the correct door. But, like Franz Kafka’s K. in The Castle, access will always be denied.

It’s like prayer. We pray because it gives a sense that we can (somehow) have control over our lives. When our prayers are answered, it’s a miracle. When they’re not, our request was not God’s will.

Austin Osman Spare was an artist, writer, and musician–he played clarinet in a jazz band. He was also an occultist and a magician and has been described by writer Alan Moore as “possibly the greatest English magician of the twentieth century.”

It’s always troubled me that if Spare was such a truly great magician then why was his life spent “downwardly mobile” in a state of relentless poverty, dirt, and misery? In his later years, he wandered pubs offering to draw portraits in return for money, beer or food–the food he usually gave to the many cats he collected. Wouldn’t a truly great occult magician be able to conjure up an endless supply of blank cheques?

But Moore sees magic as more to do with the creative imagination:

“I think that Magic offers the artist a new way of looking at their consciousness, and of looking at where they get their ideas from.”

Which is how Spare thought of magic and its “power” to create. 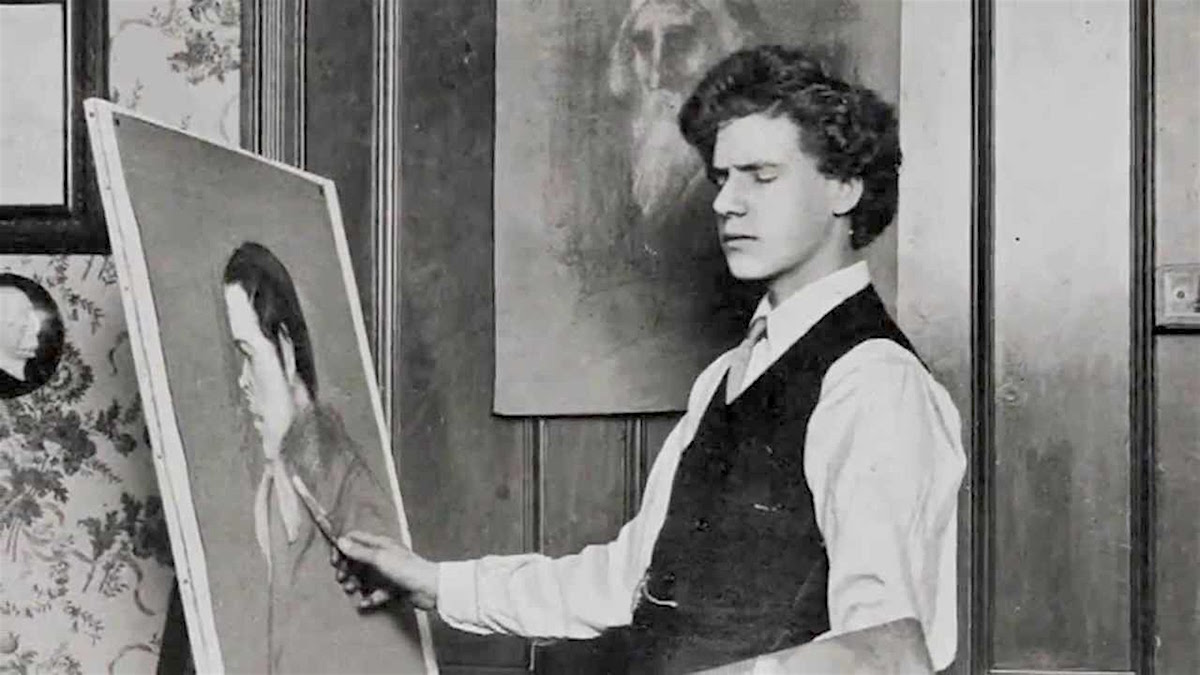 Austin Osman Spare was born into a working class family in London on 30th December, 1886. His father was a policeman, his mother the daughter of a Royal Marine. This was a no-nonsense, square-headed kind of family. They lived together in a tenement in Smithfield—the city’s meat market district. Every day, on his way to school, Spare had to wander through the busy bloody market with its hanging carcasses and offal-splattered cobblestones.

Spare showed a prodigious talent for drawing. When still a teenager, his artwork was included in an exhibition at the Royal Academy. His technique for line drawings led Spare to be hailed as the new Aubrey Beardsley—who was then the fashionable Decadent artist of polite London society.

This, perhaps, should have been a caveat as fashionable artists tend to bloom and fall with the season. His work was prominently exhibited in the British Section of the St. Louis Exposition and at the Paris International Exhibition in 1903.

Yet, Spare’s startling early success—where it seemed nearly every art critic hailed him as “a genius” and as “the major hope for British art”–soon vanished. 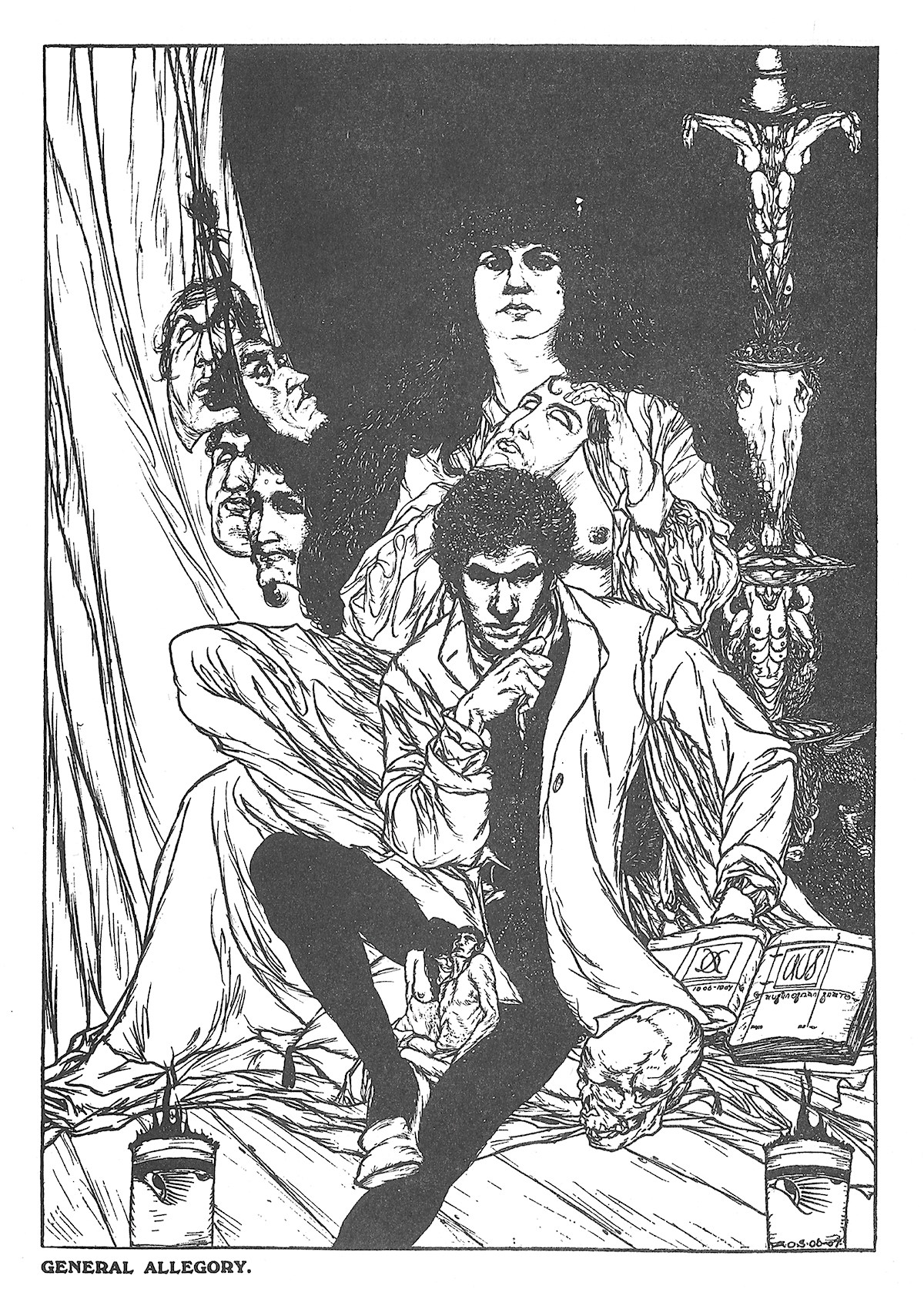 There are those who argue that his working class background went against him. Others, have suggested it was his was growing interest in the occult which precluded further success. George Bernard Shaw was concerned over Spare’s interest in the esoteric and dismissed the artist’s work as “strong medicine” which was definitely not to everyone’s taste. 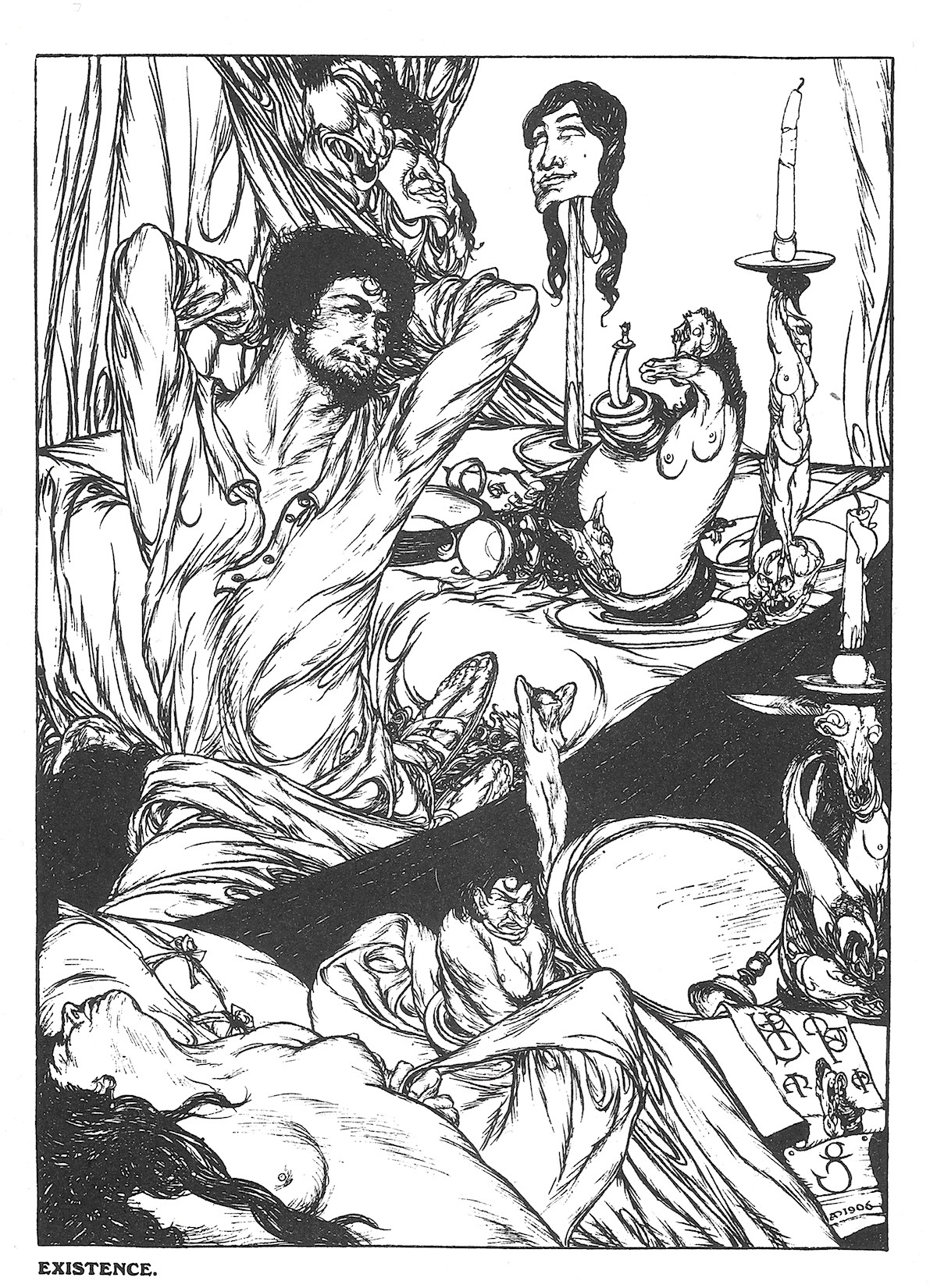 His interest in the occult started with his reading of Madame Blavatsky and Agrippa. Through mutual friends, he came into the orbit of Aleister Crowley. The two men became good friends, which was fine and dandy until they fell out. Whatever happened between these two men to sour their relationship is still not fully known. Crowley described Spare as a “Black Brother” that is an occultist who had failed to submit his ego for the advancement of learning. Or in plain English, to submit himself (or rather his arse) to the will of the “Great Beast” Mr. A. Crowley. 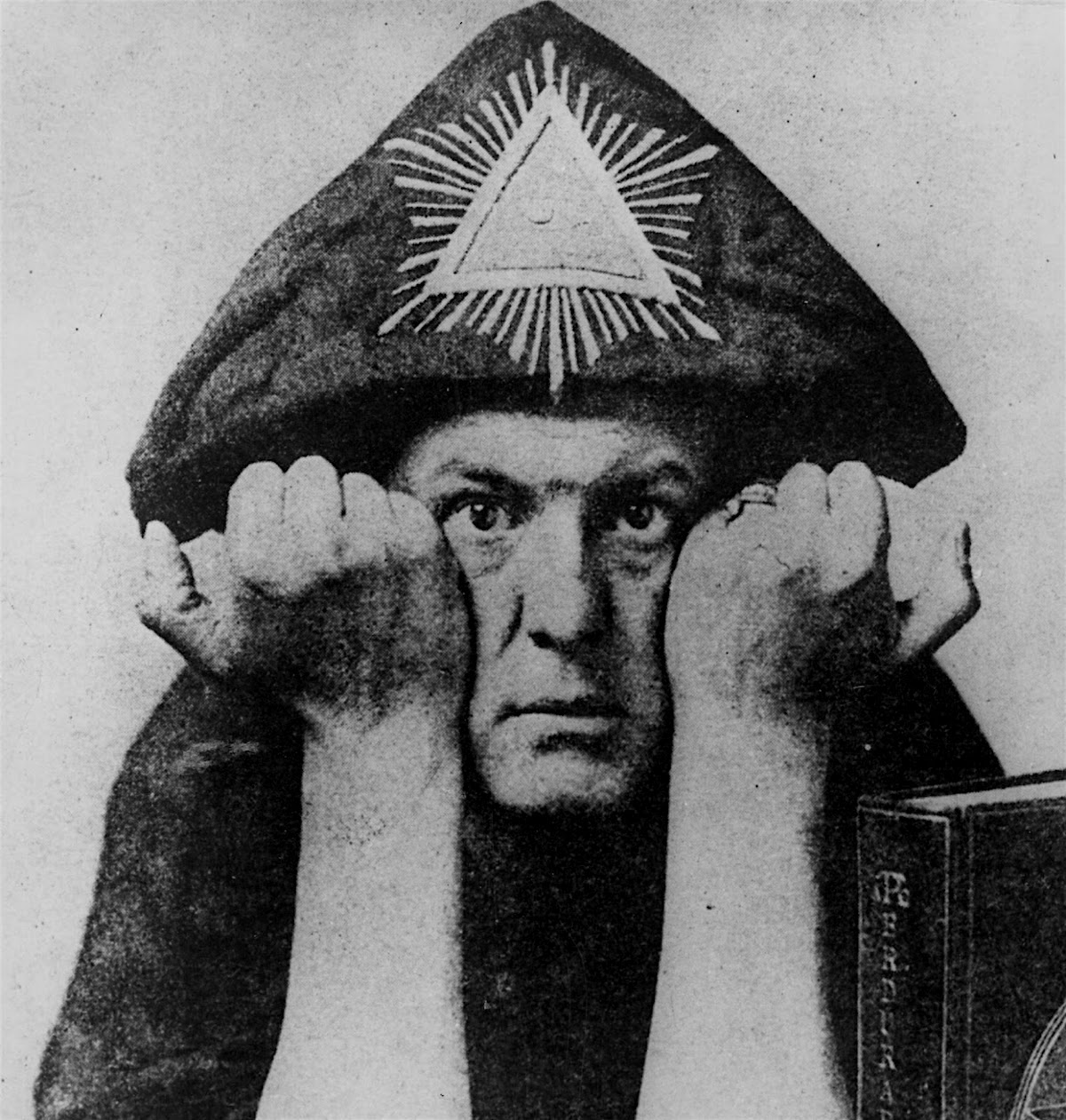 Old Aleister was so miffed by Spare’s rejection that he wrote a poem “The Twins” in which he cast himself and (the object of his desire) Spare as the incestuous Egyptian gods Horus and Set:

See, how subtly I writhe!
Strange runes and unknown sigils
I trace in the trance that thrills us.
Death ! how lithe, how blithe
Are these male incestuous vigils!
Ah! this is the spasm that kills us!

Wherefore I solemnly affirm
This twofold Oneness at the term.
Asar on Asi did beget
Horus twin brother unto Set.
Now Set and Horus kiss, to call
The Soul of the Unnatural
Forth from the dusk; then nature slain
Lets the Beyond be born again.

Spare responded by alluding to Crowley in his book The Book of Pleasure:

Others praise ceremonial Magic, and are supposed to suffer much Ecstasy! Our asylums are crowded, the stage is over-run! Is it by symbolising we become the symbolised? Were I to crown myself King, should I be King? Rather should I be an object of disgust or pity. These Magicians, whose insincerity is their safety, are but the unemployed dandies of the Brothels.

Which is also a rather fine critique of today’s vacuous identity politics. 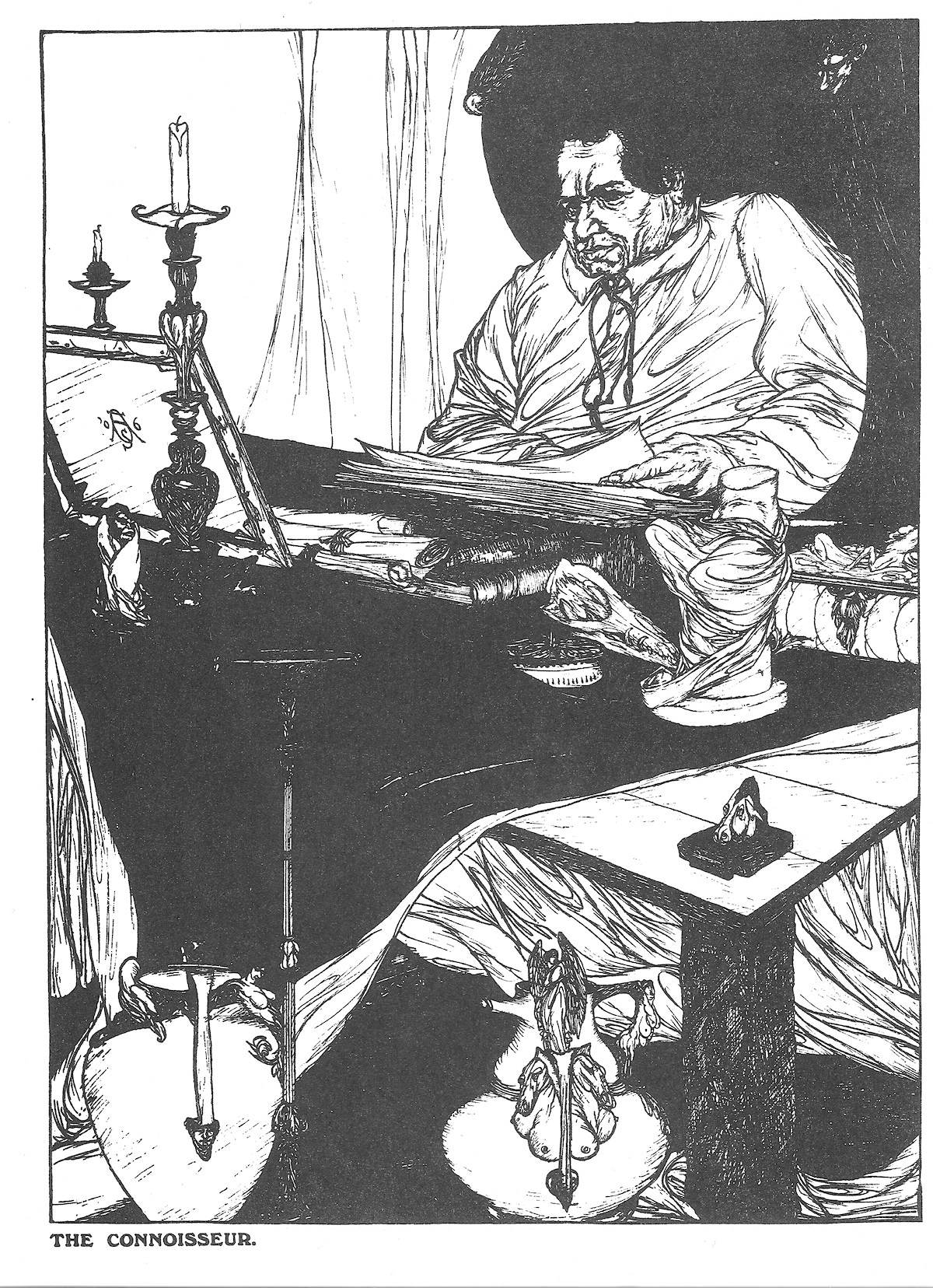 Instead of submitting to Crowley, Spare devised his own magical rituals (which have greatly influenced modern Chaos Magic) and a system of belief centred on Zos (“the body considered as a whole”) and its complementary force Kia—which were “symbolised anthropomorphically by the hand and the eye.”

Spare would go into a trance and communicate with other beings or states of consciousness, which inspired his painting. Fair to say, Spare was probably a lovely guy but very eccentric and probably a bit of a confabulist about his magical powers. But then, a wee dabbling in the occult is always good copy when explaining why things turned out the way they did. 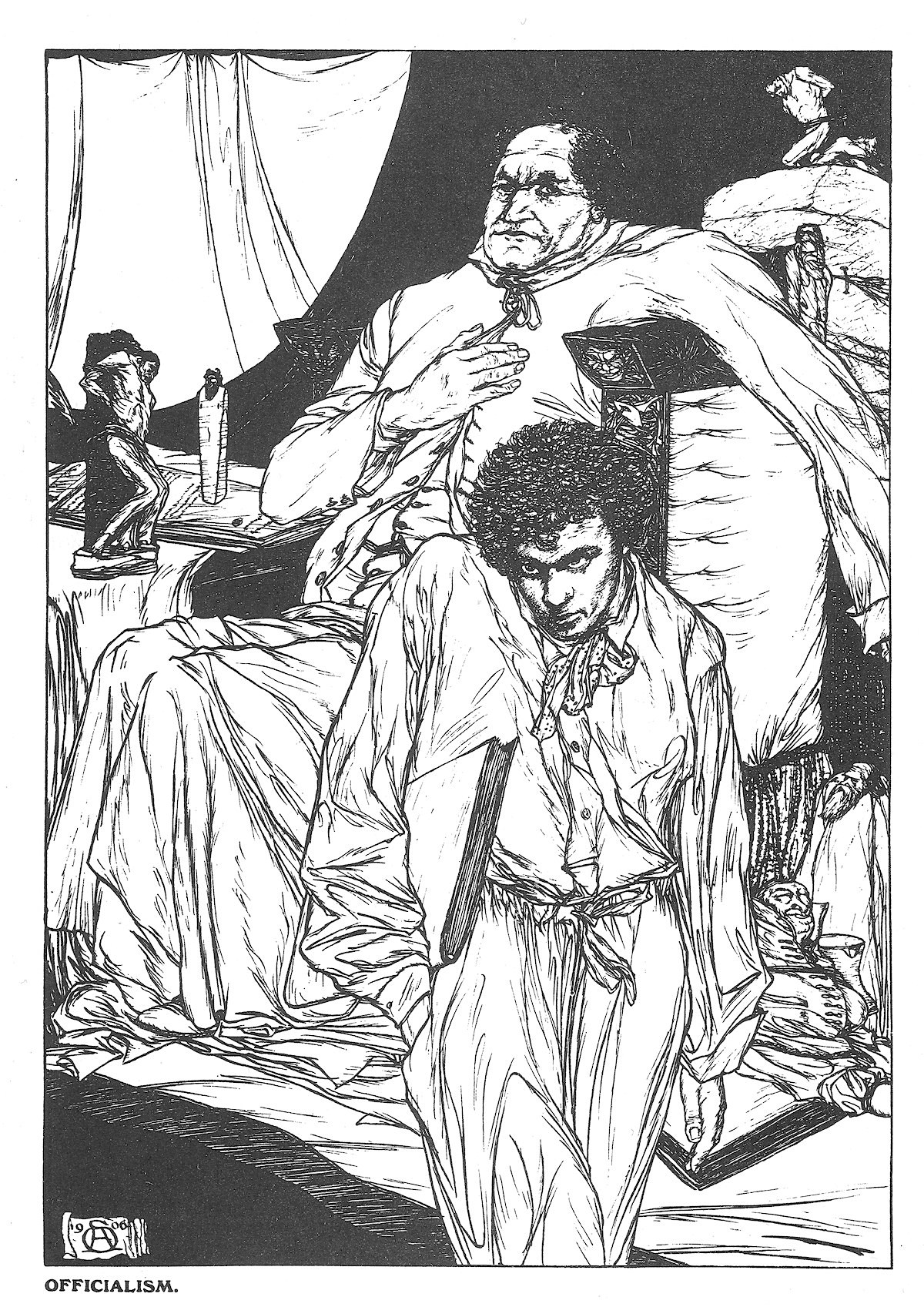 ..the sensualist is made detached, controlled, until final sublimation. His whole training is designed to render him submissive and obedient [to the Witch] until he can control, transmute, and direct his magical energy wherever desired, by cold and amoral passion.

…usually old, grotesque, worldly, and libidinously learned; and is as sexually attractive as a corpse. Yet she becomes the supreme vehicle of consummation. This is necessary for the transmutation of the sorcerer’s personal aesthetic culture, which is thereby destroyed. Perversion is used to overcome moral prejudice or conformity. By persistence, the mind and desire become amoral, focused, and entirely acceptive, and the life-force of the Id (the Great Desire) is free of inhibitions prior to final control.

Spare was possibly conjuring memories of the aged “nanny” who allegedly seduced him when he was a child. This woman, named Mrs. Paterson, claimed direct lineage to the witches of Salem…but of course…

Spare was aided and abetted in his myth-making by fellow occultist and writer Kenneth Grant, who had been a follower of Crowley. Grant was devastated by the Great Beast’s death in 1947. Now, he believed he had found his own personal magus in Spare.

Unfortunately, Grant’s beliefs owed more to H. P. Lovecraft than “Magick”. He also made up so much fiction about Spare’s alleged magical powers that it is unclear as to what Spare actually believed and what he actually practiced.

For example, it was Grant who claimed Spare was inducted into the occult by an octogenarian witch who seduced him when he was a boy. Great story, but most likely false. Similarly, Grant wrote eloquently about Spare’s use of magical sigils with which “any wish may be given symbolic form.” Whether true or not, it was always a disappointment when these sigils failed to deliver the “particular desire in question.”

Spare’s use of magic never extricated him from anything but only seemed to keep him trapped in the direst poverty and near obscurity. His life was lived painting in a tiny darkened basement, where he collected stray cats and drew portraits in pubs for beer and sandwiches. After Spare’s death in 1956, Grant claimed this kind of “intense disappointment” was the way by which Spare attained greater enlightenment.

And lo, we’re back to the beginning again. 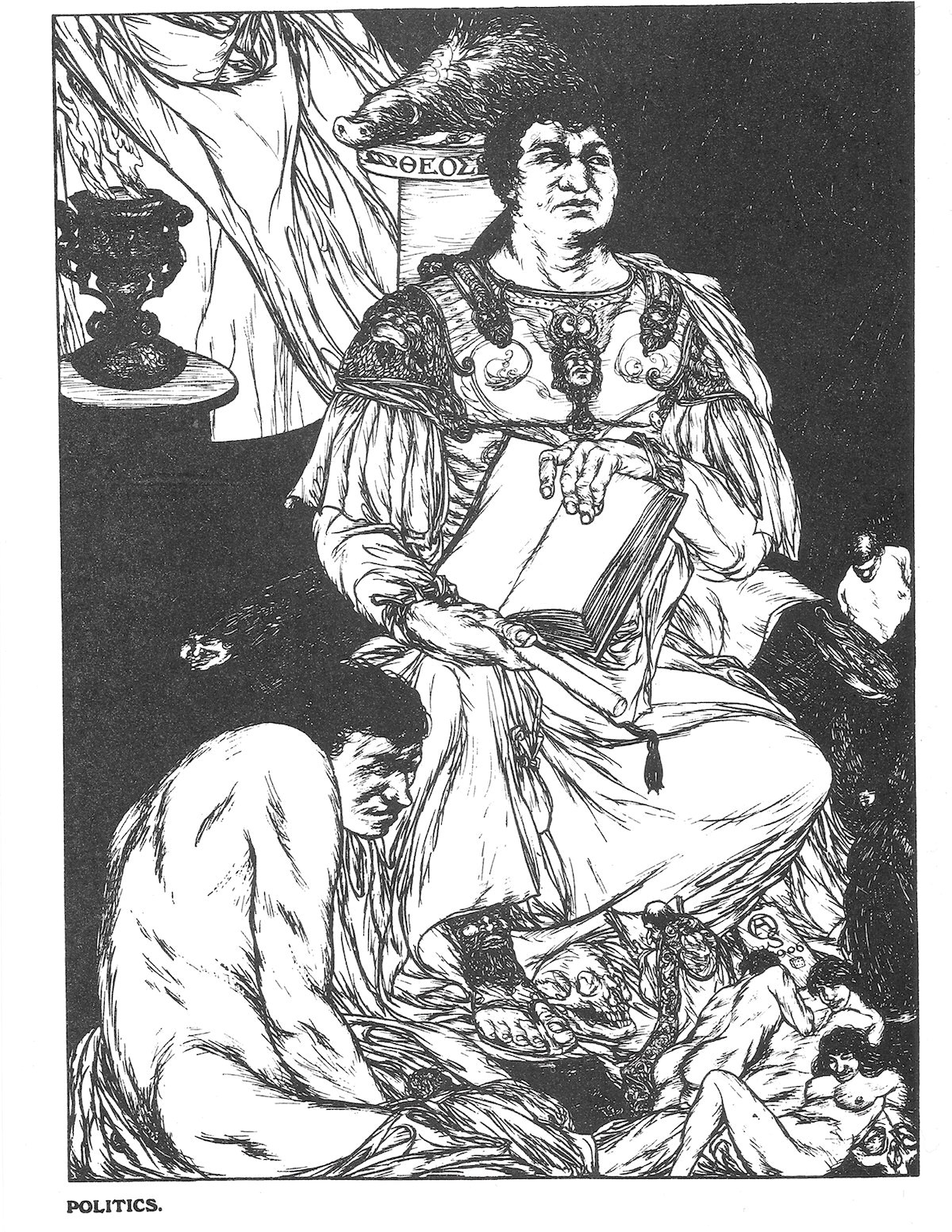 In 1907, Spare published A Book of Satyrs, a series of occult illustrations intended as “satires.” Spare believed the word “satire” was derived from the Greek “satyr” as this was how “satire” had been once written. In his biography on Spare, writer Phil Baker noted:

Spare liked the old spelling because the word evoked the goat-legged animal men, suggestive of lust, who pranced their way through the work of Beardsley and the 1890’s in general, overlapping with the era’s neo-pagan cult of Pan.

A Book of Satyrs allowed Spare to showcase his undeniable talents as he broke away from the influence of artists like Aubrey Beardsley, Charles Ricketts, and George Frederic Watts. The book consisted of a series of “satirical pictures”—“The Church”, “Existence”, “Quakery”, “Intemperance”, “Fashion”, “The Connoisseur”, “Politics”, “The Beauty Doctor”, and “Officialism”—framed by three other drawings “Introduction”, “Advertisement and the Stock Size” and “General Allegory.” As Baker wrote:

Spare’s career was dogged by comparisons to Beardsley, and some of his earlier black and white work does have a Beardsleyish air, but the drawings of A Book of Satyrs is very different: Beardsley’s pictures are relatively easy to copy, because the genius has already gone into simplified design, whereas copying the obsessional penwork in A Book of Satyrs would be so much work as hardly worth the trouble.

The book was intended as a critique of all those repressive Victorian/Edwardian values, where money and power were all and sex was verboten. The illustrations also marked Spare’s growing interest in spiritualism and the occult as writer Paul Newman notes:

Spare’s existence was a claustrophobic tunnel of self-exploration. And he did not think of the satyrs and spirits he drew as fantasies but as records of those he encountered in his daily life. “These beings,” a critic wrote, “live…in their horned horror in the drab streets south of London Bridge. The ribaldry and coarse revelry of the slums is due to the influence of these beings of the Borderland, [Spare] believes.

Not long after the publication of A Book of Satyrs, Spare had an exhibition of his work at the Bruton Gallery, 13 Bruton Street, London. It was here that he met Aleister Crowley, who introduced himself as the “Viceregent of God upon Earth.” Crowley pronounced Spare as a kindred spirit who (like Crowley) was a “messenger fo the divine.” 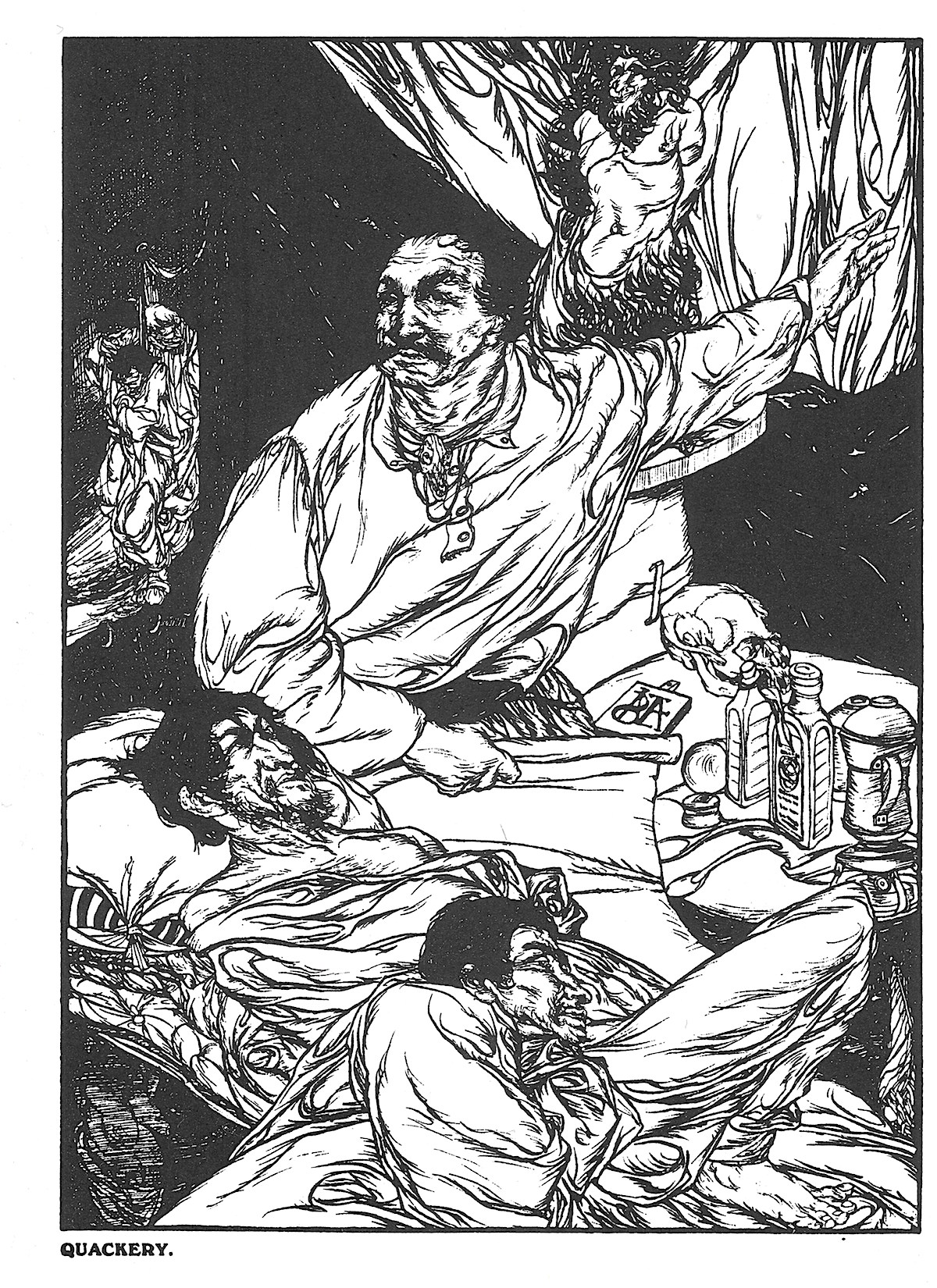 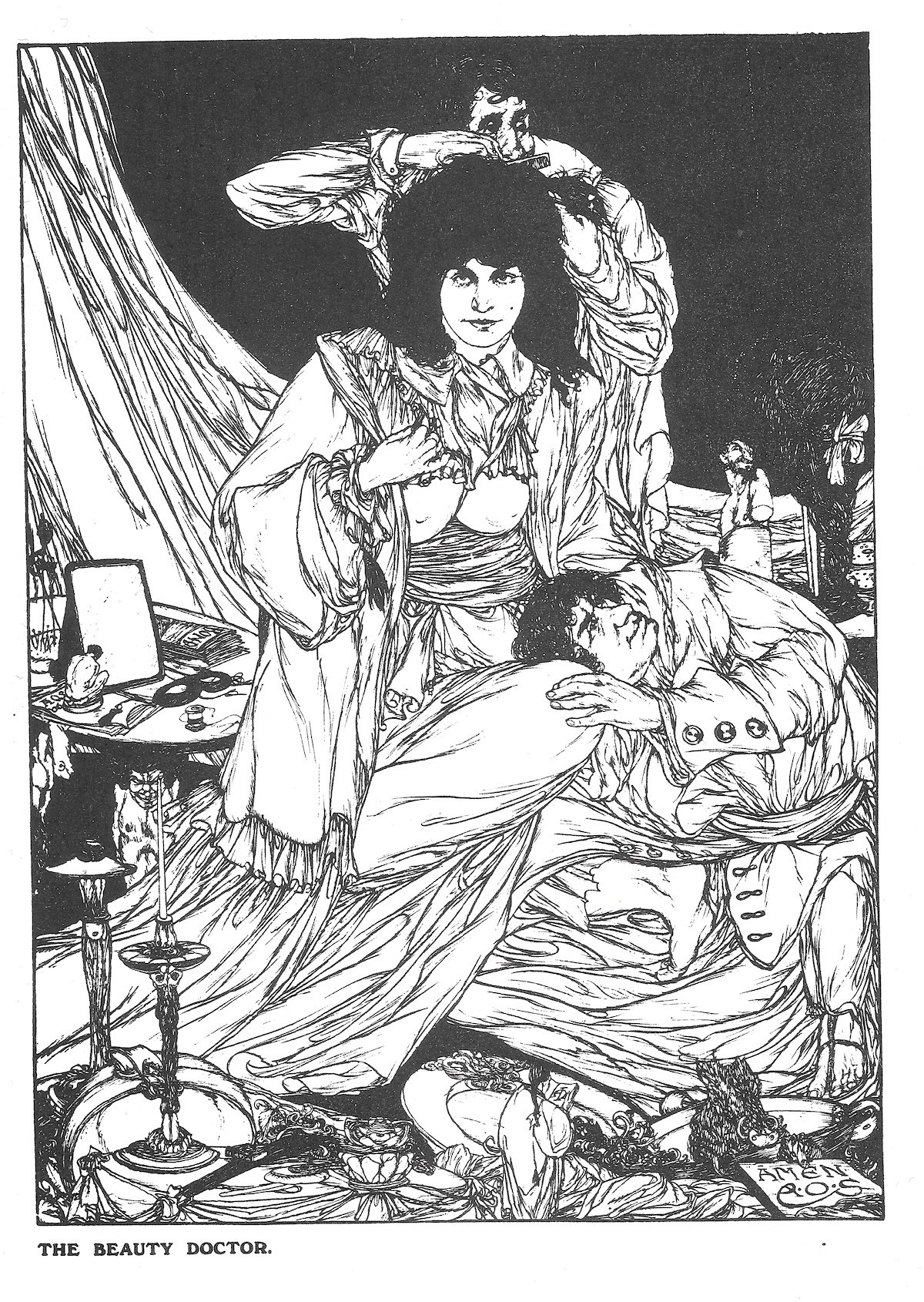 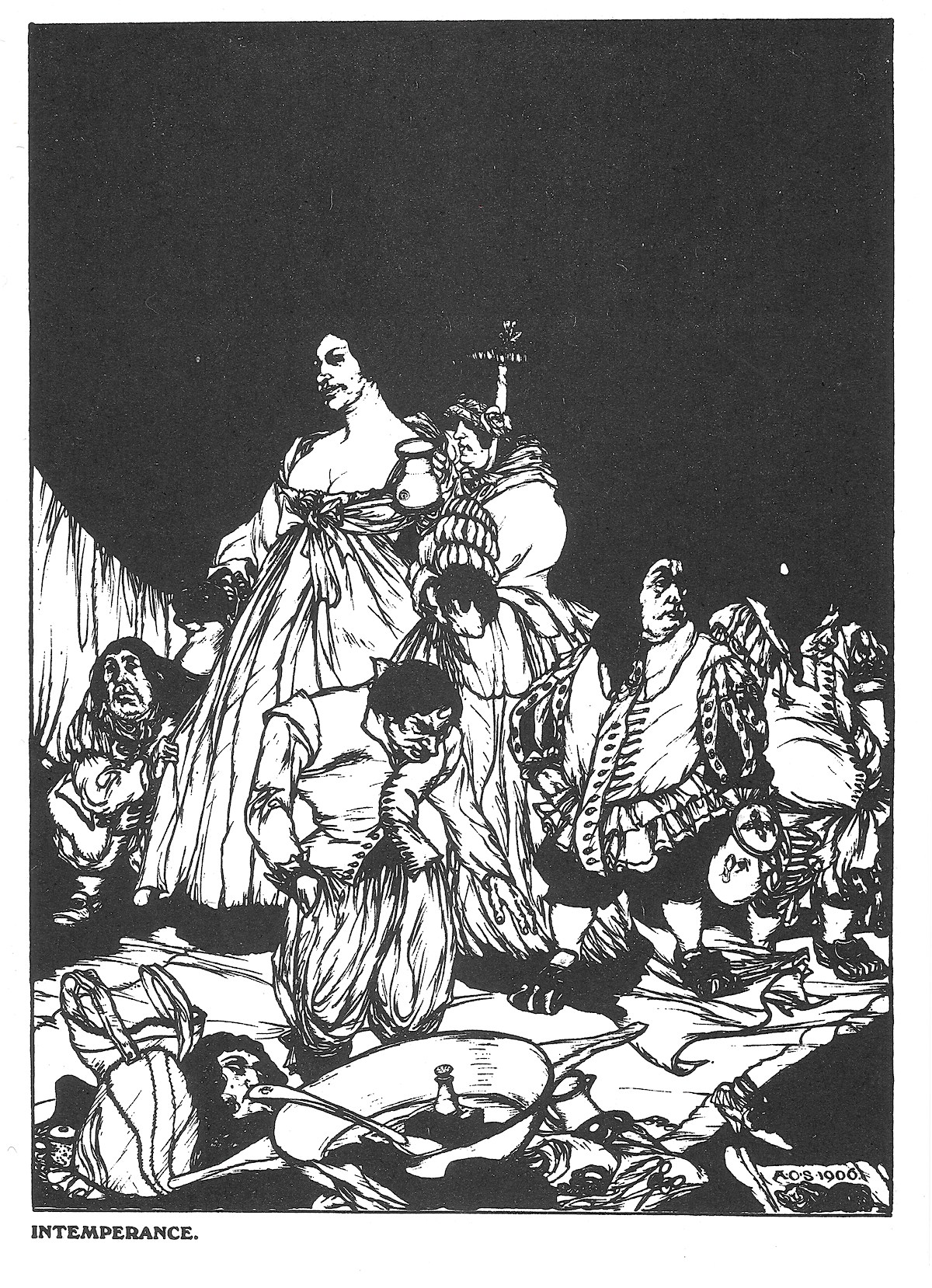 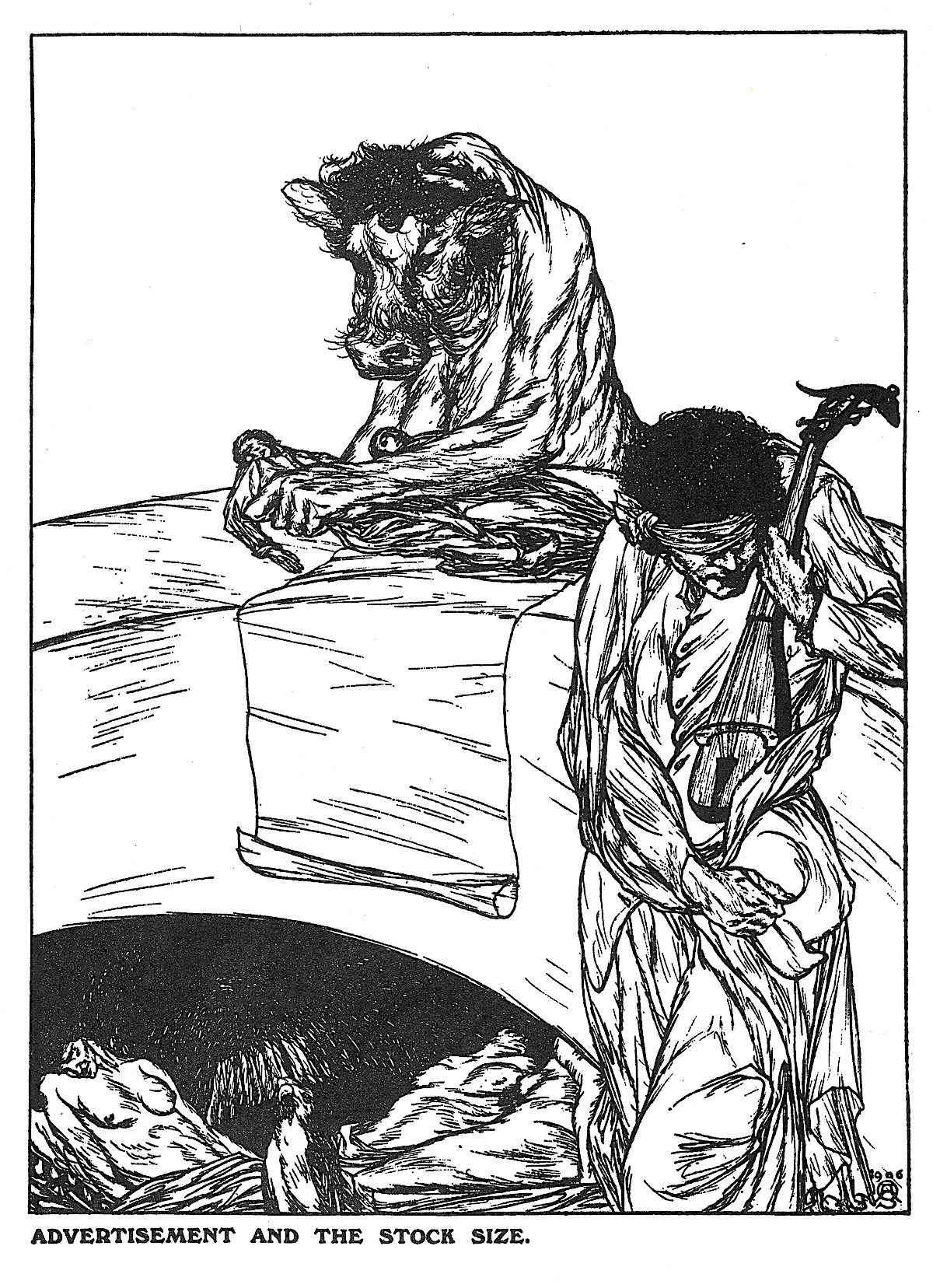 Advertisement and the Stock Size 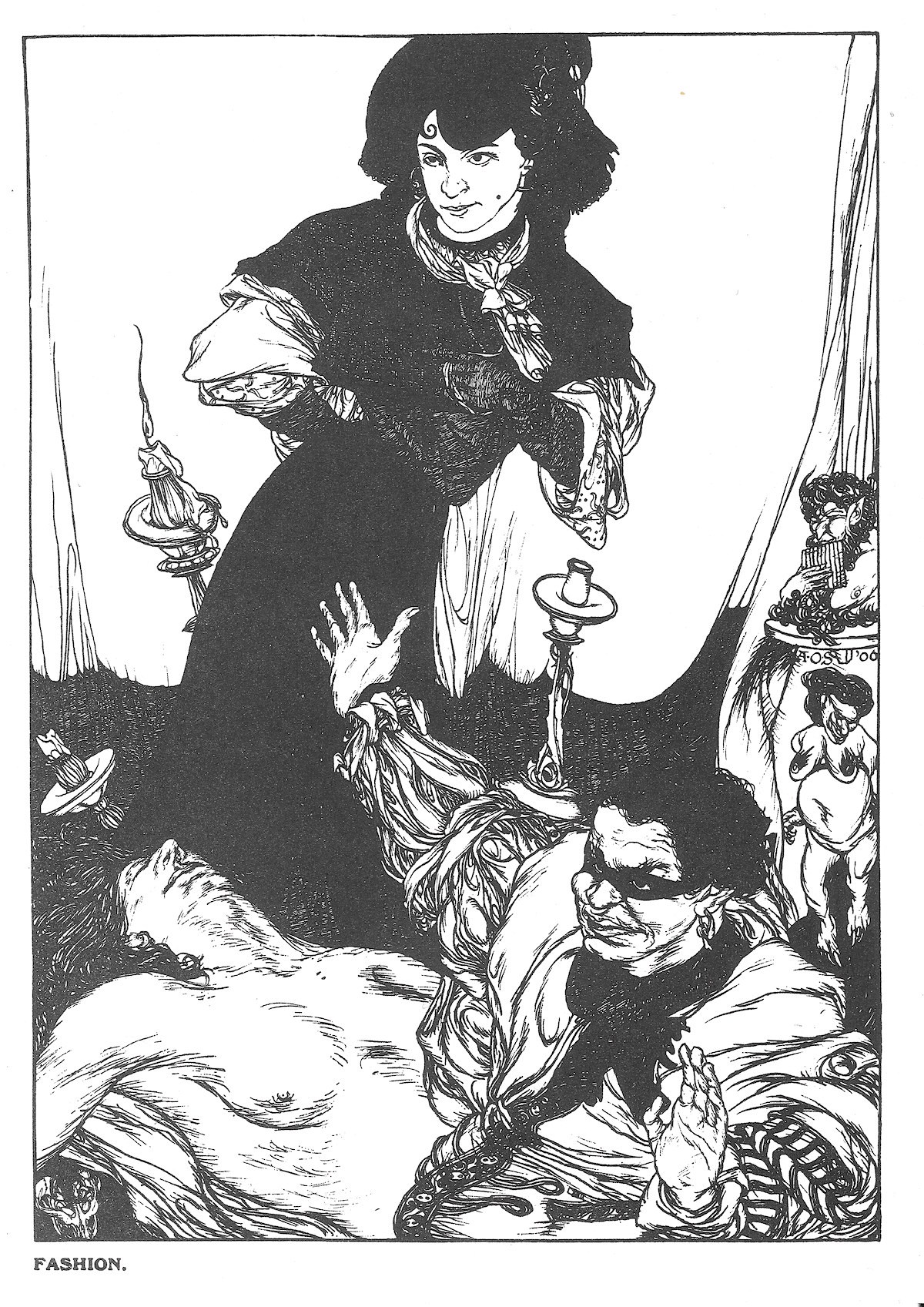 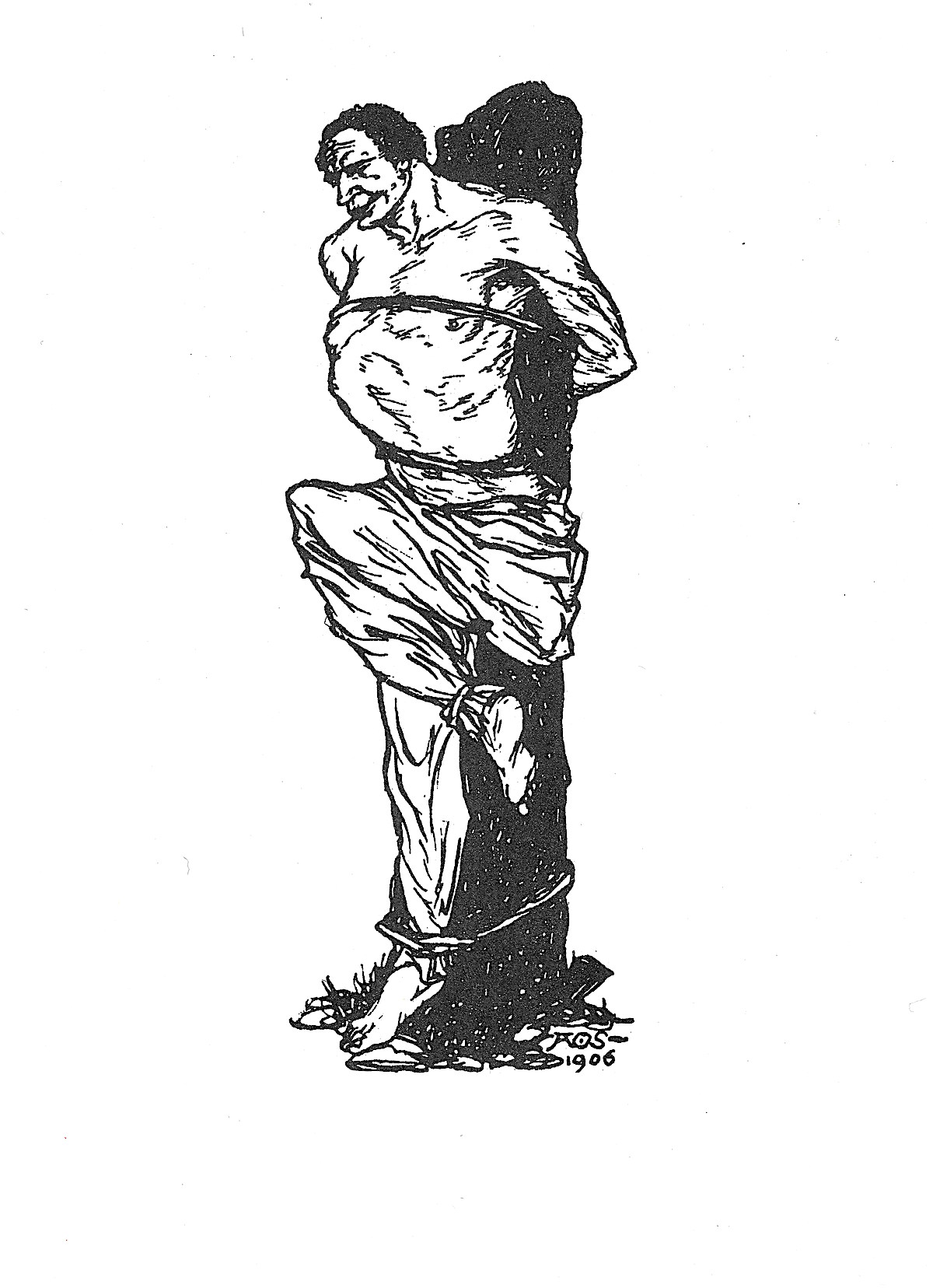 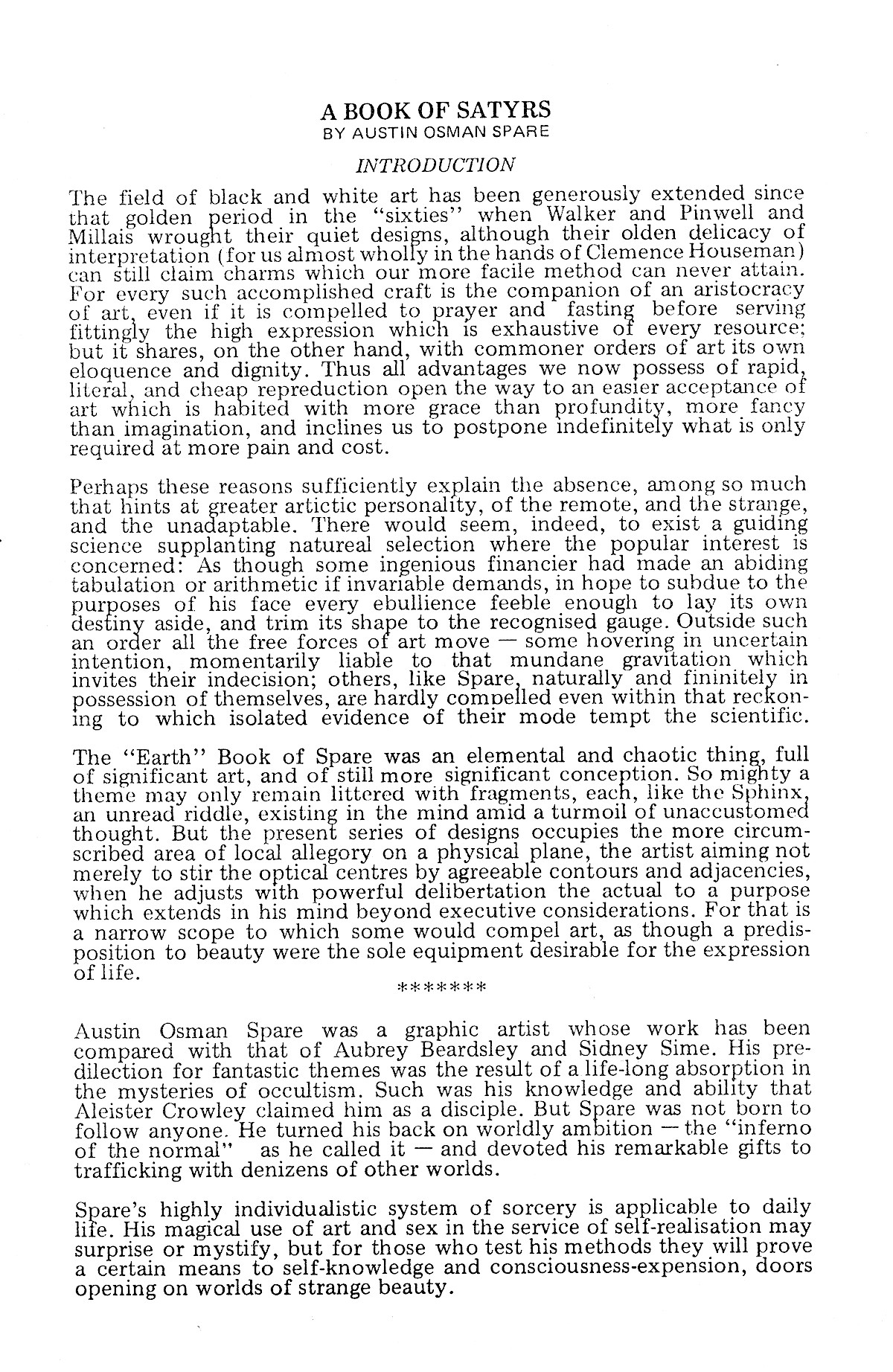 A Book of Satyrs 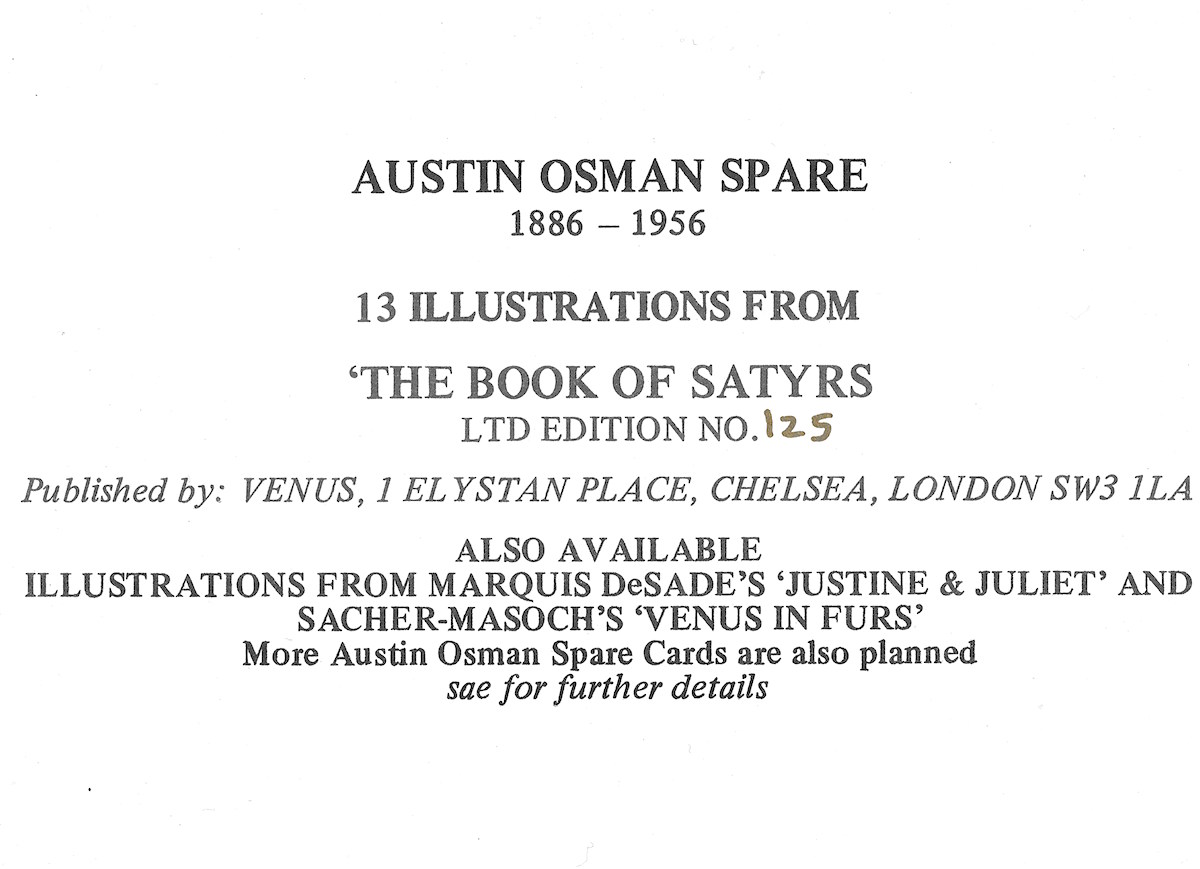