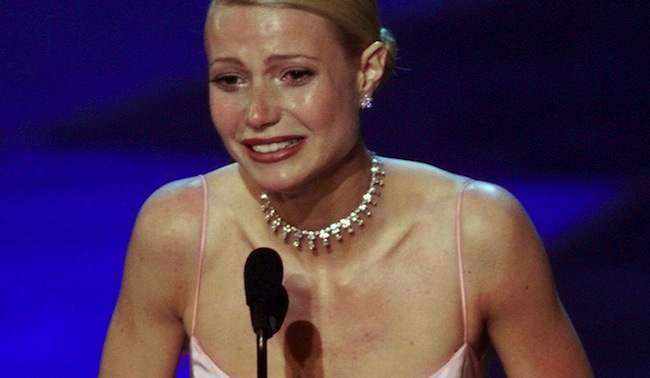 So in anticipation of yet more long-winded melodrama tonight, we present the contenders for the most memorable Oscar speech of all time. And the nominations are….

Garson’s 1942 acceptance speech for the Best Actress prize (awarded for her role in Mrs Miniver) lasted an impressive seven minutes. This, ladies and gentlemen, is the woman to blame for what followed.

A busy field, this, with no shortage of winners taking to the stage with soap box in tow. But the original is still the greatest. Brando’s 1972 Best Actor award for The Godfather was accepted on his behalf by Sacheen Littlefeather (actress and campaigner Marie Cruz) as a protest against the treatment of ‘American Indians’. Nowadays, of course, the word ‘Indian’ would trigger protests of its own.

Louise Fletcher, for services to the aurally impaired

Accepting her 1975 Best Actress award for One Flew Over the Cuckoo’s Nest, Fletcher used sign language for the benefit of her deaf parents, whom she thanked “for teaching me to have a dream”.

73 years young in 1991, the vigorous veteran picked up his Best Supporting Actor award for City Slickers, performed a series of one-armed press-ups and cracked a couple of slightly smutty jokes.

Roger Ross Williams had just accepted his 2010 Best Documentary Short award, when Elinor Burkett (who had the original idea for the film and was originally credited as a producer) stormed the stage, despite Williams’ mother’s attempts to block her path. Burkett had quit the film and sued Williams – and now she was not prepared to allow him his moment in the sun. What the actual words of her speech meant is anybody’s guess, but the message was loud and clear.

Joe Pesci, for getting straight to the point

No messing about for Joey, accepting the Best Supporting Actor for Goodfellas. Badda bing, badda boom.

David Niven, for poise under pressure

Niven won a Best Actor award himself, but his finest performance was as co-host at the 1974 Academy Awards, when he found himself blind-sided by a streaker. His calm response and cool put-down made him a model of insouciance. The streaker, Robert Opel, was subsequently murdered in his art gallery.

Winslett’s Best Actress award for The Reader will be forever remembered for the winner’s breathless recital of the entire film credits, and world-class gushing over the ‘goddesses’ she beat to the title.

And the winner is…. Gwyneth Paltrow! Après moi, le deluge…

In 1999 the floods began before Paltrow had even left her seat to accept the Best Actress award for Shakespeare in Love. The lachrymose performance that followed will never be equaled. Not even by Kate Winslett.