In the absence of a working time machine one of the best ways to step back in time is looking at old menus. Here’s a collection of London menus – mostly from the 20th Century. Although our first one is from 1889 and is from The Alpha restaurant – considered the first vegetarian restaurant in London situated opposite the Oxford Music Hall which eventually became Virgin records and now Primark. 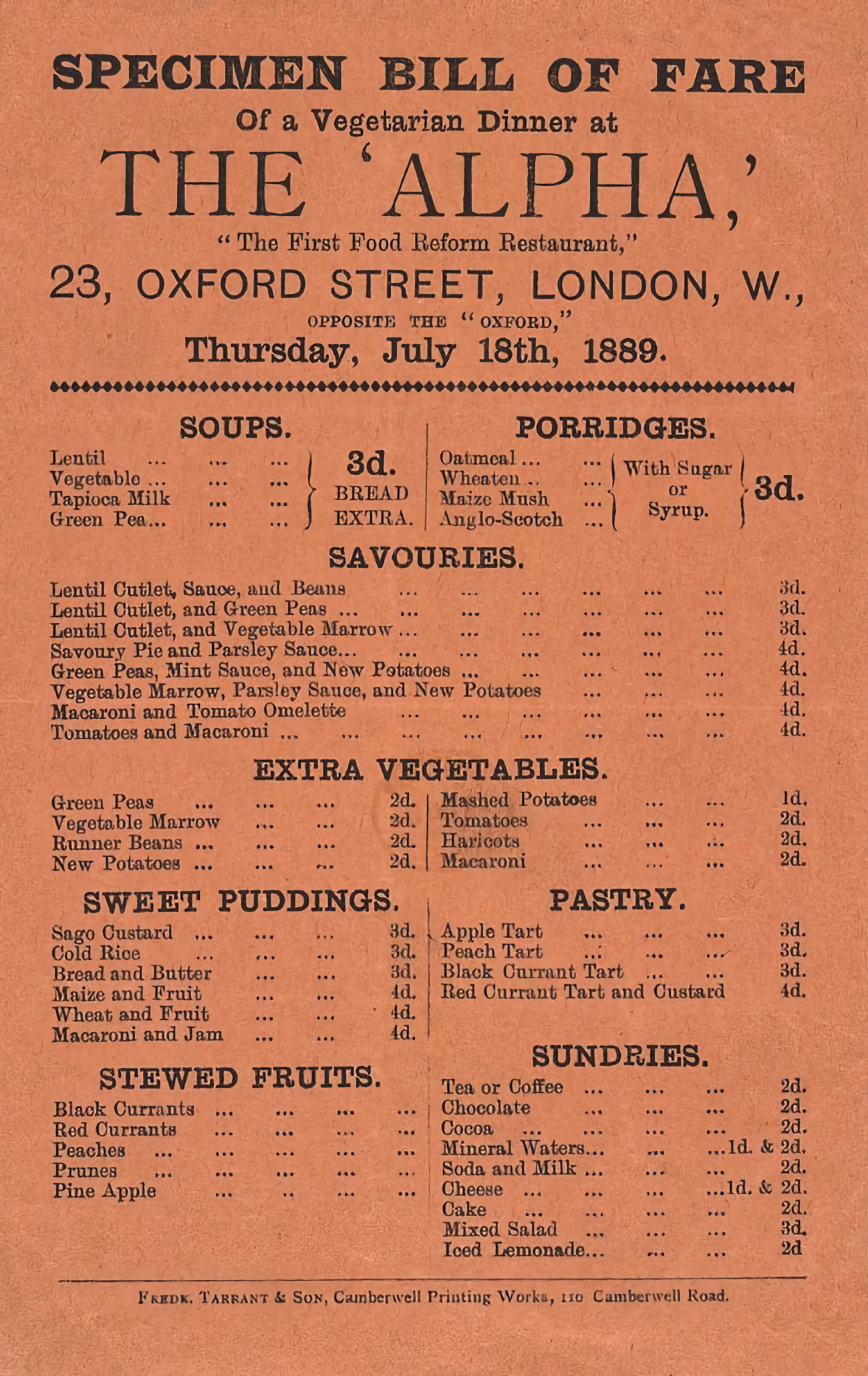 Specimen bill of fare of a vegetarian dinner at the ‘Alpha,’ “The first food reform restaurant,” 23, Oxford Street, London, W., opposite the “Oxford, (Oxford Music Hall)” Thursday, July 18th, 1889. The Alpha is considered the first vegetarian restaurant in London. 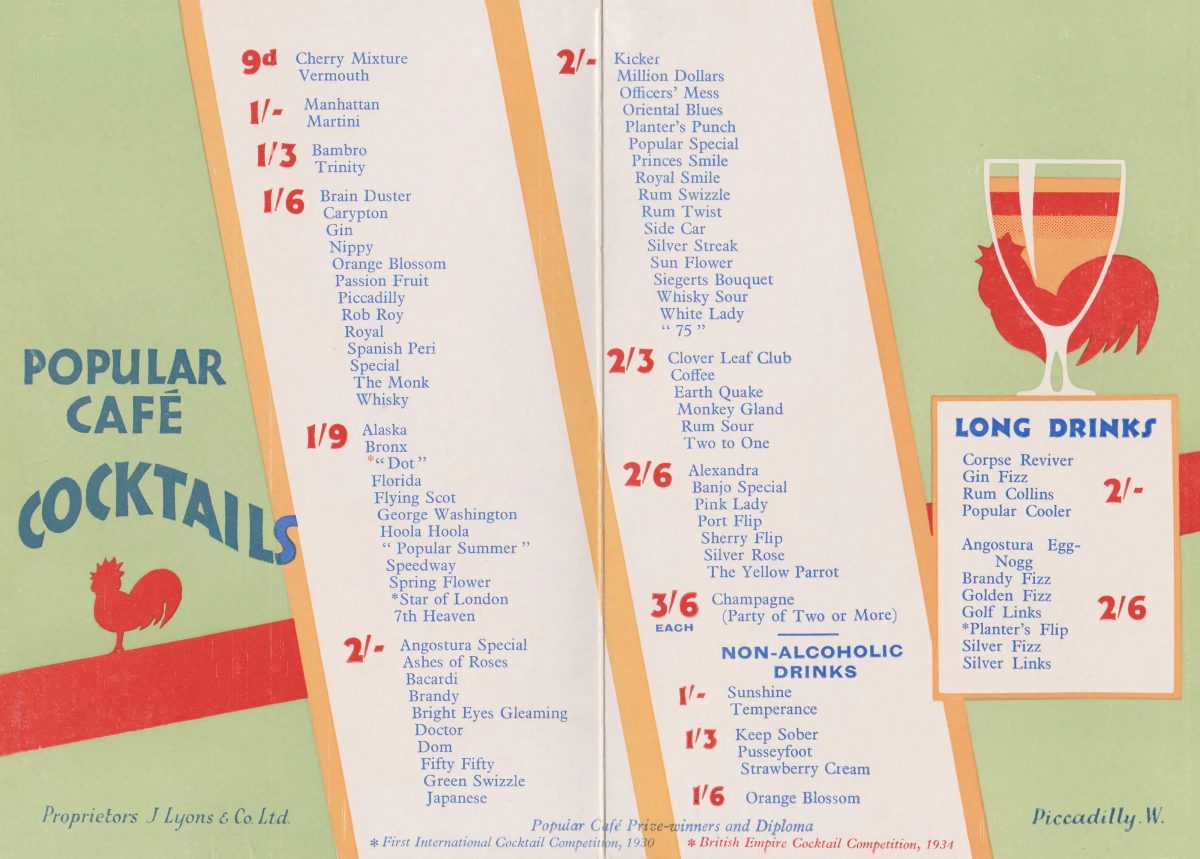 The Lyons “Popular Café” on Piccadilly – the menu is from around 1937. 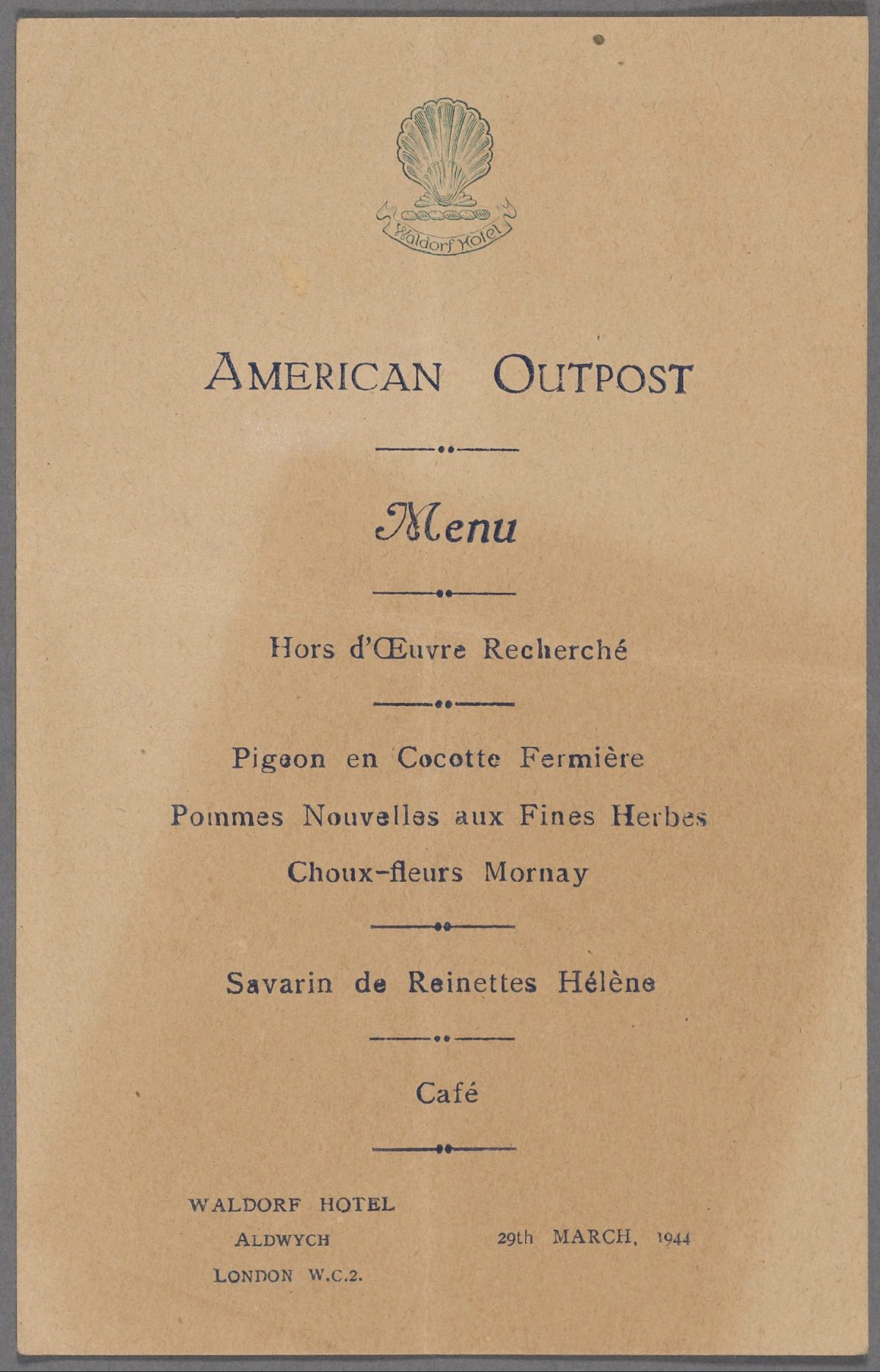 Waldorf Hotel on the Aldwych – menu from 1944

During WWII the Waldorf Hotel advertised in the press reassuring visitors that its alloy structure made it safe. One nearby stray bomb, however, shattered the Palm Court roof and unfortunately the tango tea dances had to be suspended. Now the Waldorf Hilton, the hotel is still open. 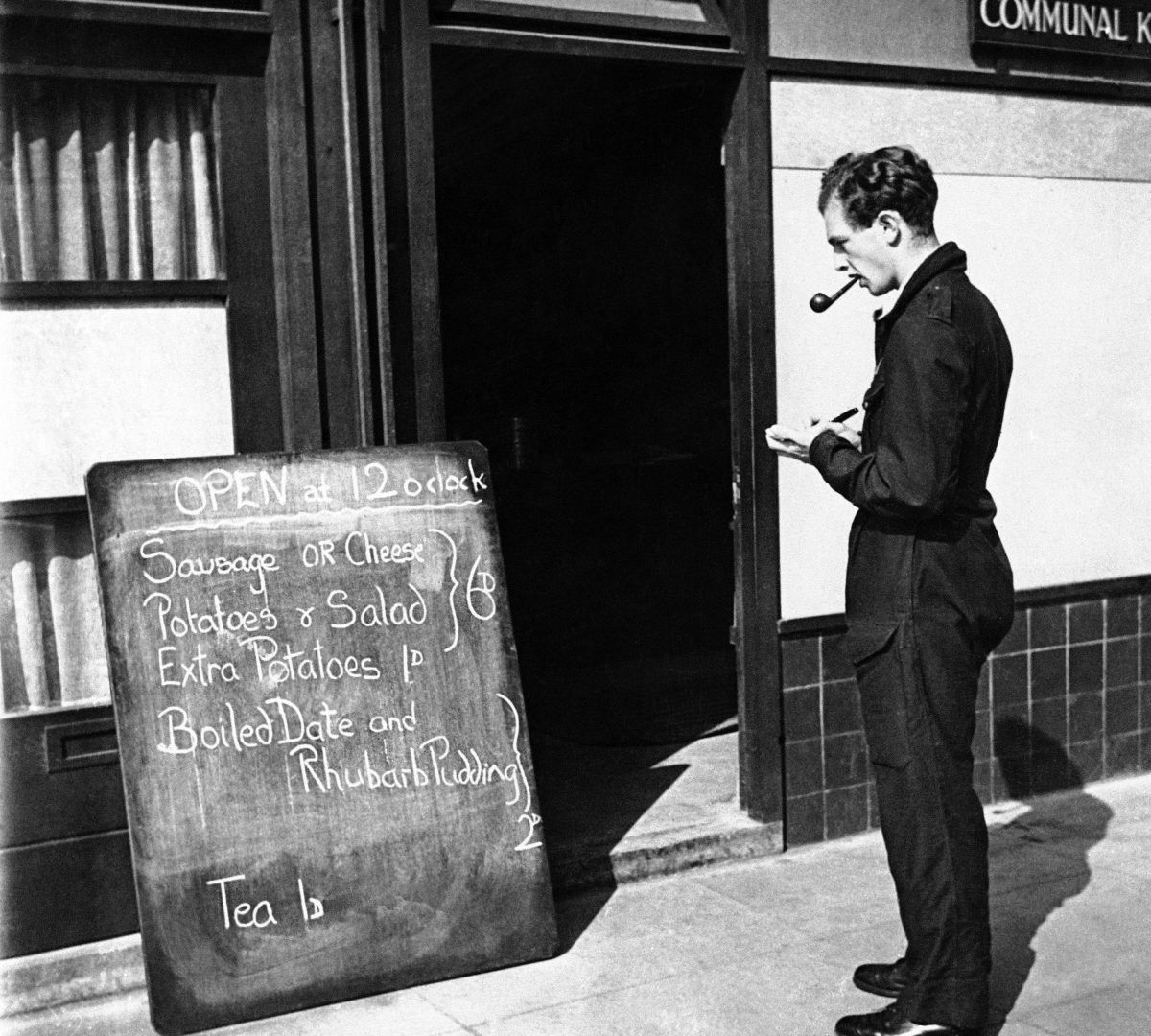 Christopher Ounsted, volunteer driver of the mobile canteen, stops at a communal kitchen to copy the days menu prior to starting out on his days rounds in London on Sept. 17, 1941. He presents a list of the food available to the people he visits, permitting them to make a selection. 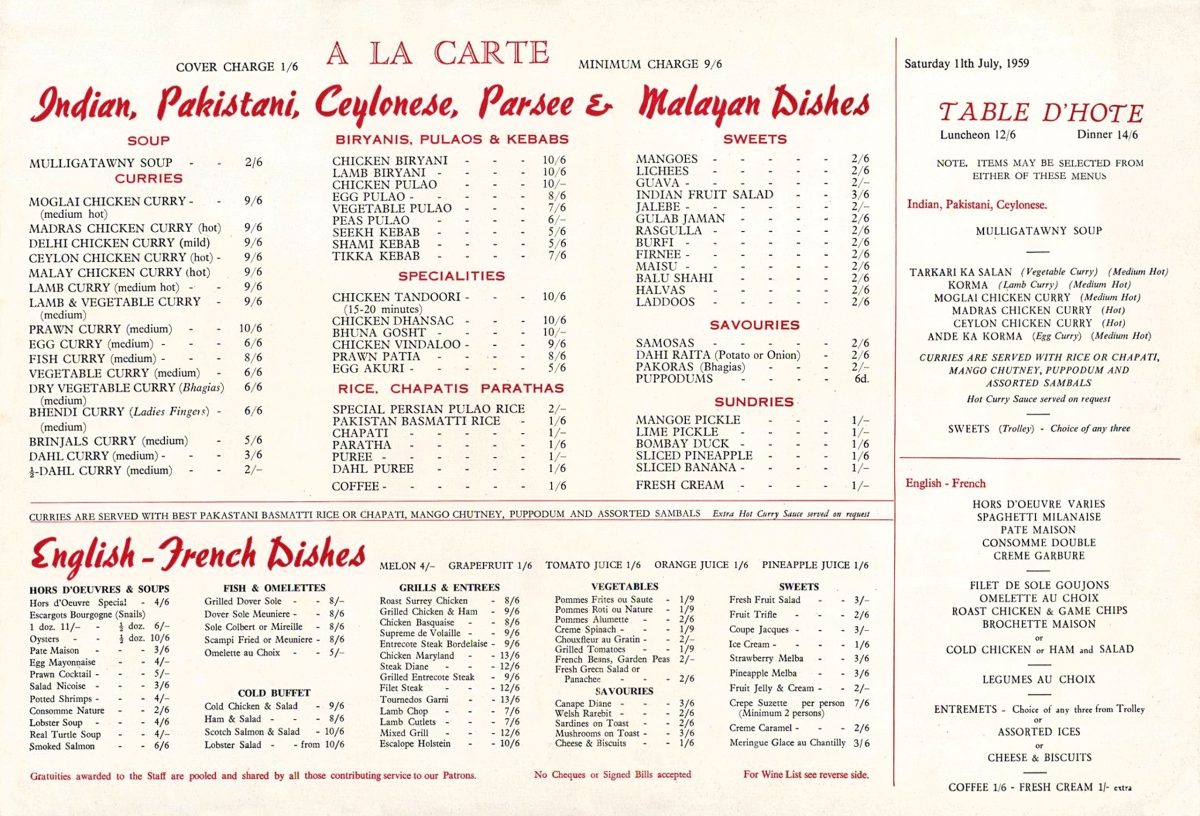 Located at 99-101 Regent Street. Veeraswamy’s was opened in 1926 by Edward Palmer, an Anglo-Indian retired British Indian Army officer, the grandson of an English general and an Indian princess. It is the oldest surviving Indian restaurant in the United Kingdom. 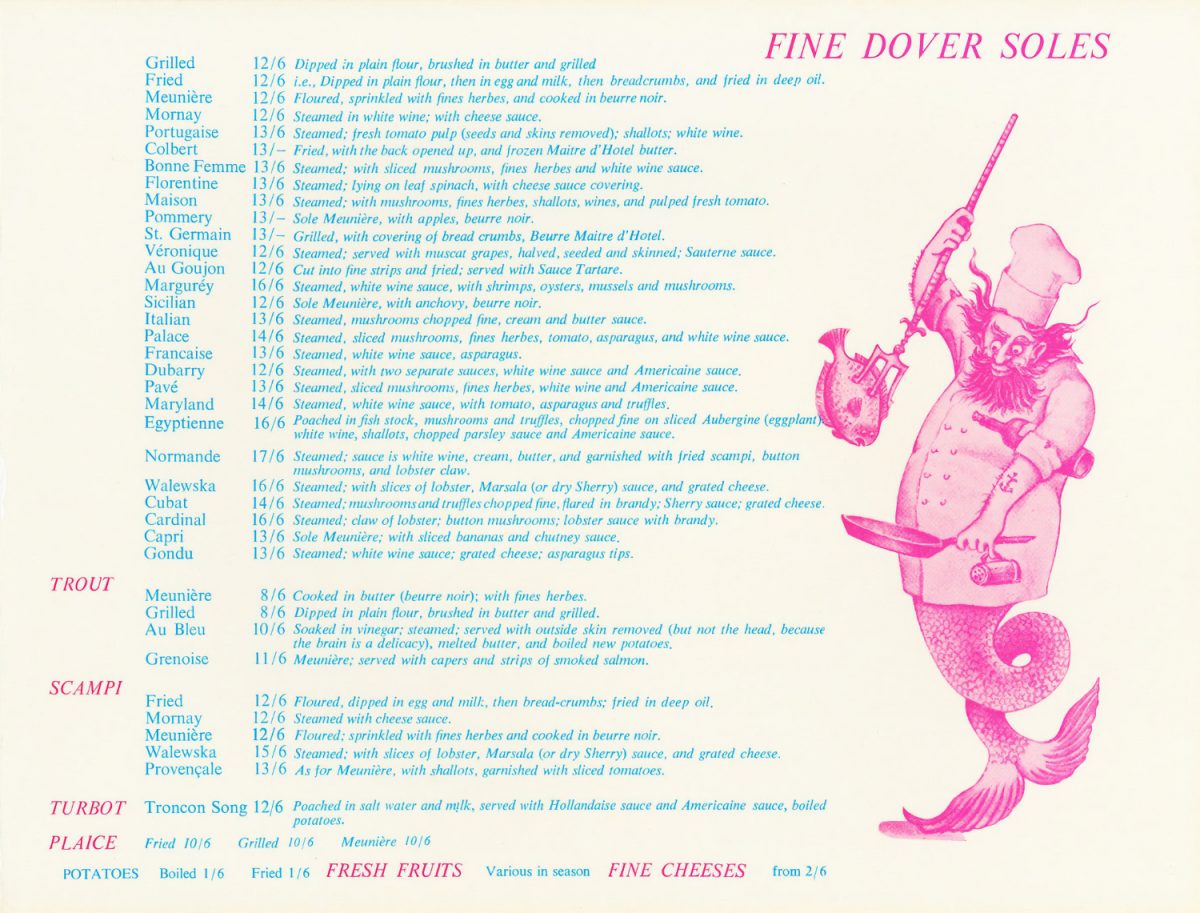 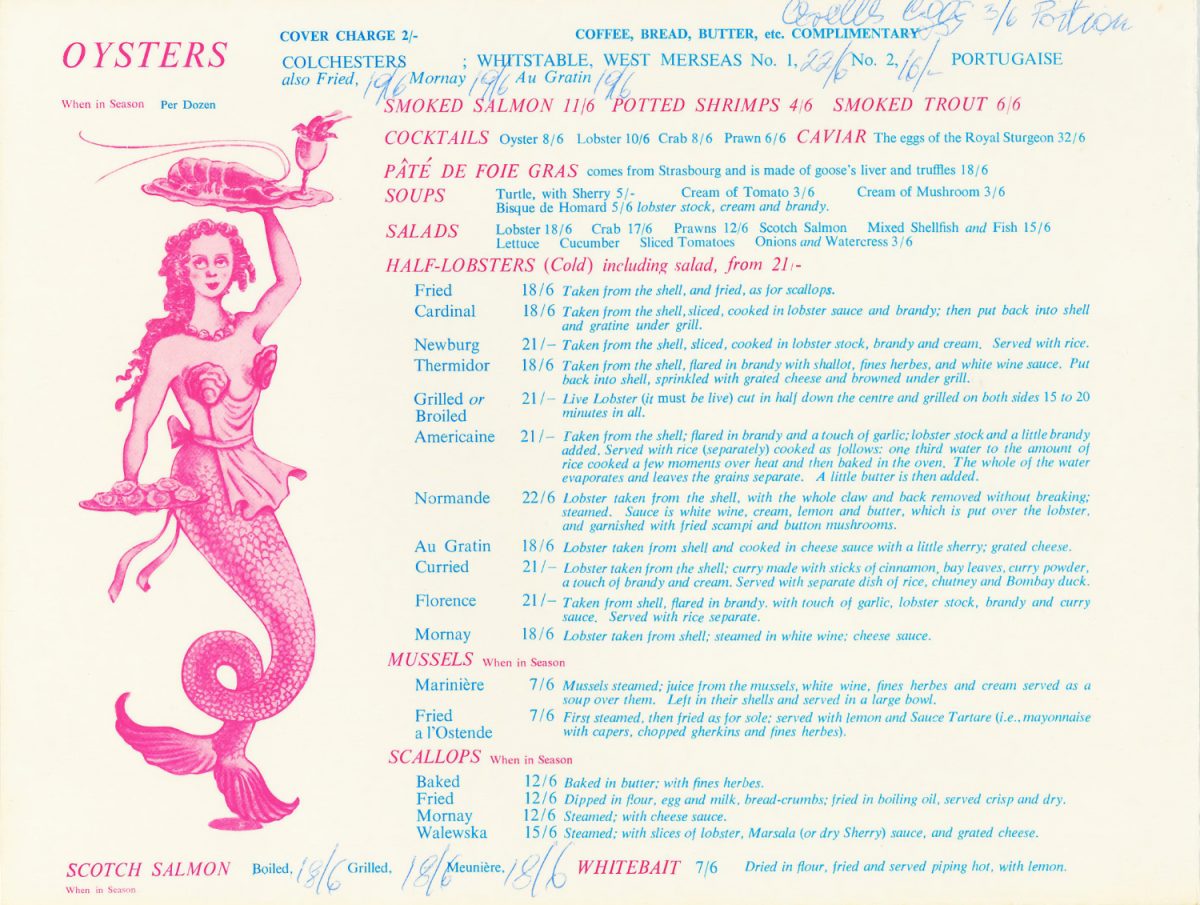 The menu c.1955 at Wheeler and Co. on Old Compton Street. The spy Donald Maclean ate oysters and drank Chablis for lunch there during his last day in London. By 1951, when Maclean and his friends visited for lunch, the restaurant featured a long counter on the left-hand side where a waiter or Walsh himself opened oysters at a frightening speed – up to six hundred an hour if the restaurant was busy. The back area had its own small bar and claret coloured couches where the menu could be perused before sitting in the restaurant proper. The large green menu contained thirty-two sole and lobster dishes but no vegetables, save for a few boiled potatoes, and no desserts. During post-war austerity, when English food was at its dreariest and some of it still rationed, the meals served at Wheeler’s seemed luxurious. 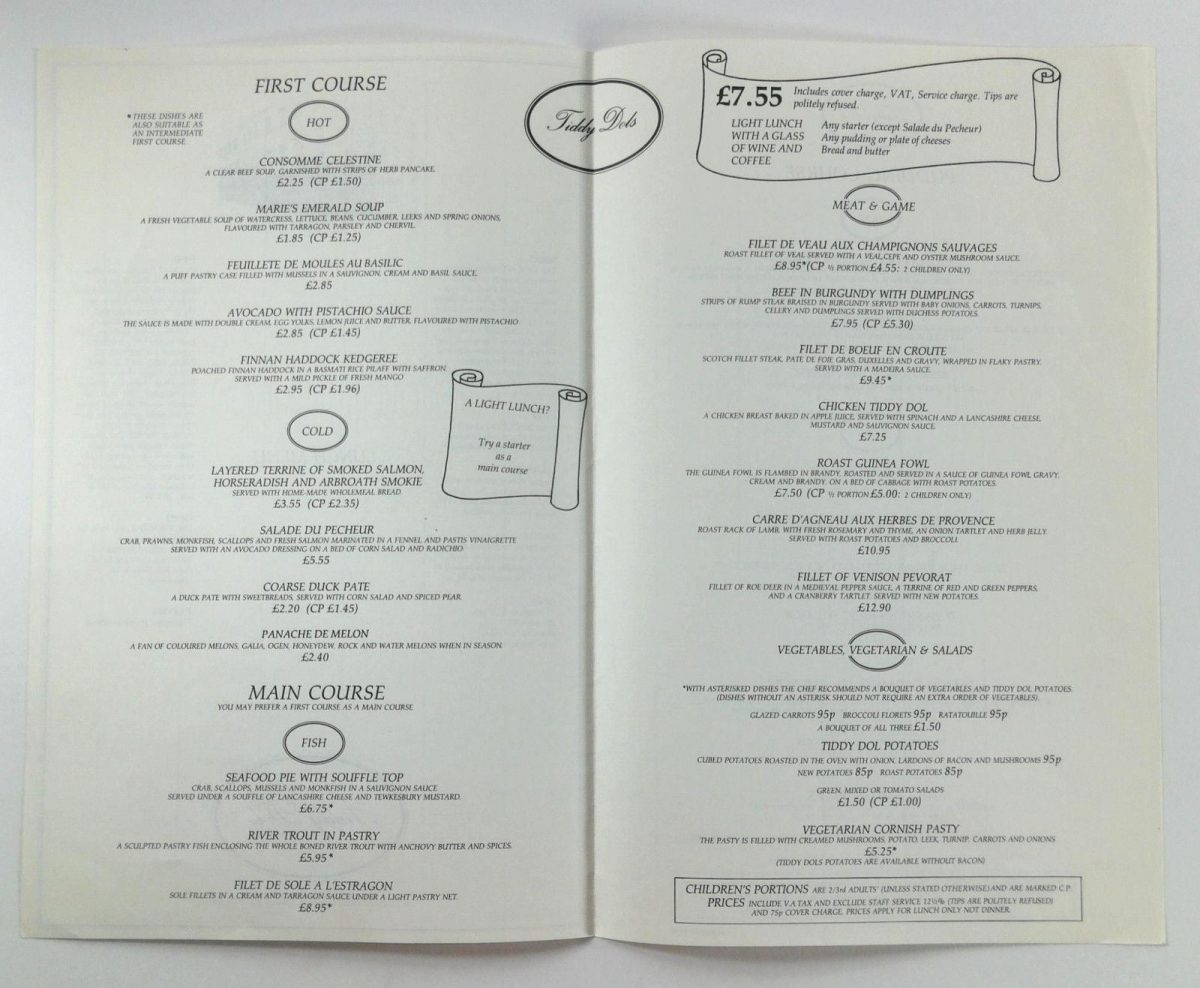 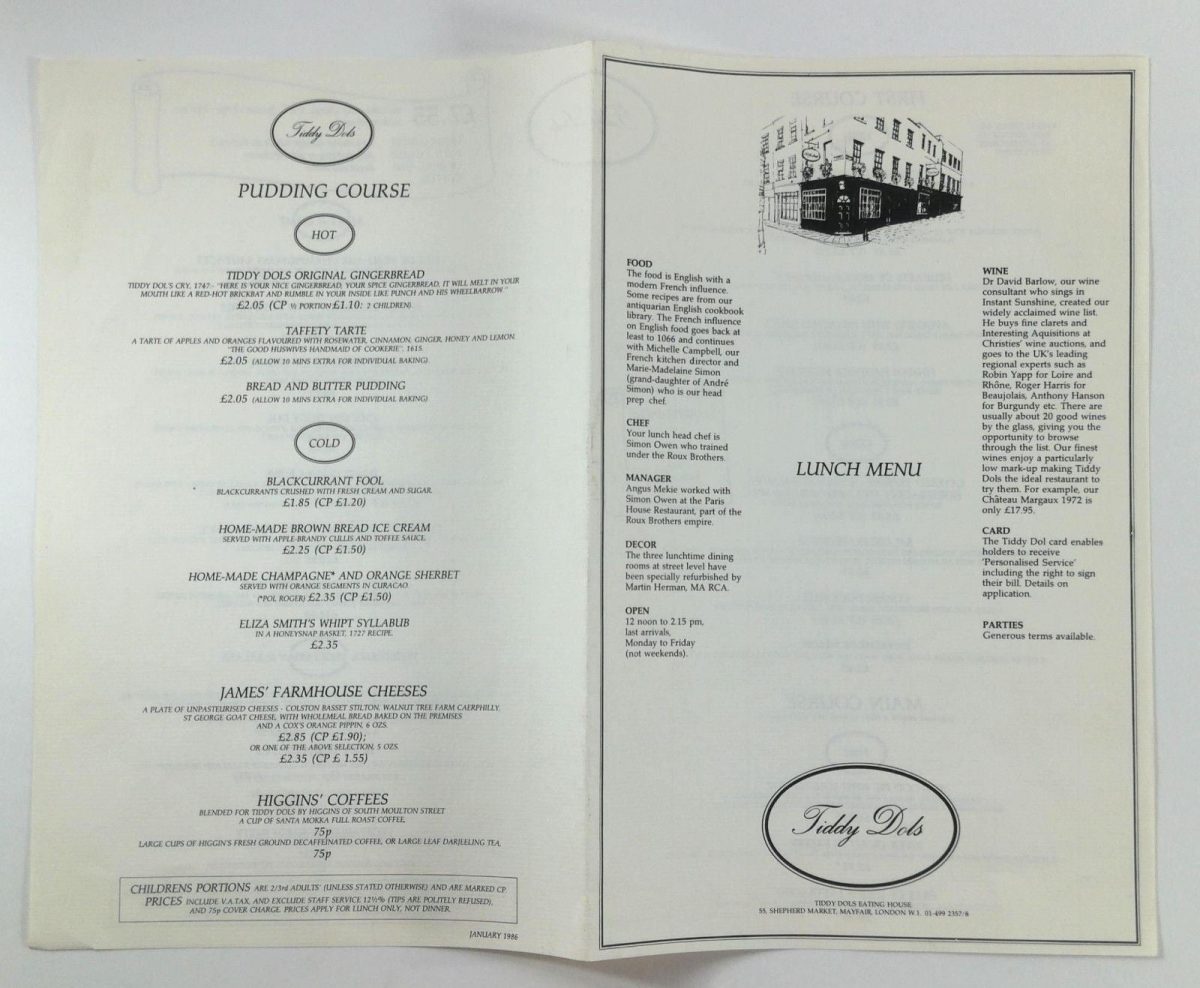 Named after a famous gingerbread seller who frequented Mayfair in the 1700s, and immortalized in an engraving by William Hogarth, Tiddy Dol can be seen in a crowd holding a piece of gingerbread cake in the air singing “Tiddy Diddy Doll” as he sold his hot spiced gingerbread, a special recipe which Tiddy Dols had on their menu until they closed in 1998.

The menu for the Vita Sun Café at the Coventry Street Lyons Cornerhouse, c.1926. The café was sponsored by the New Health Society who’s main aim was ‘to teach the advantages of the right food, fresh air, sunshine and exercise’. 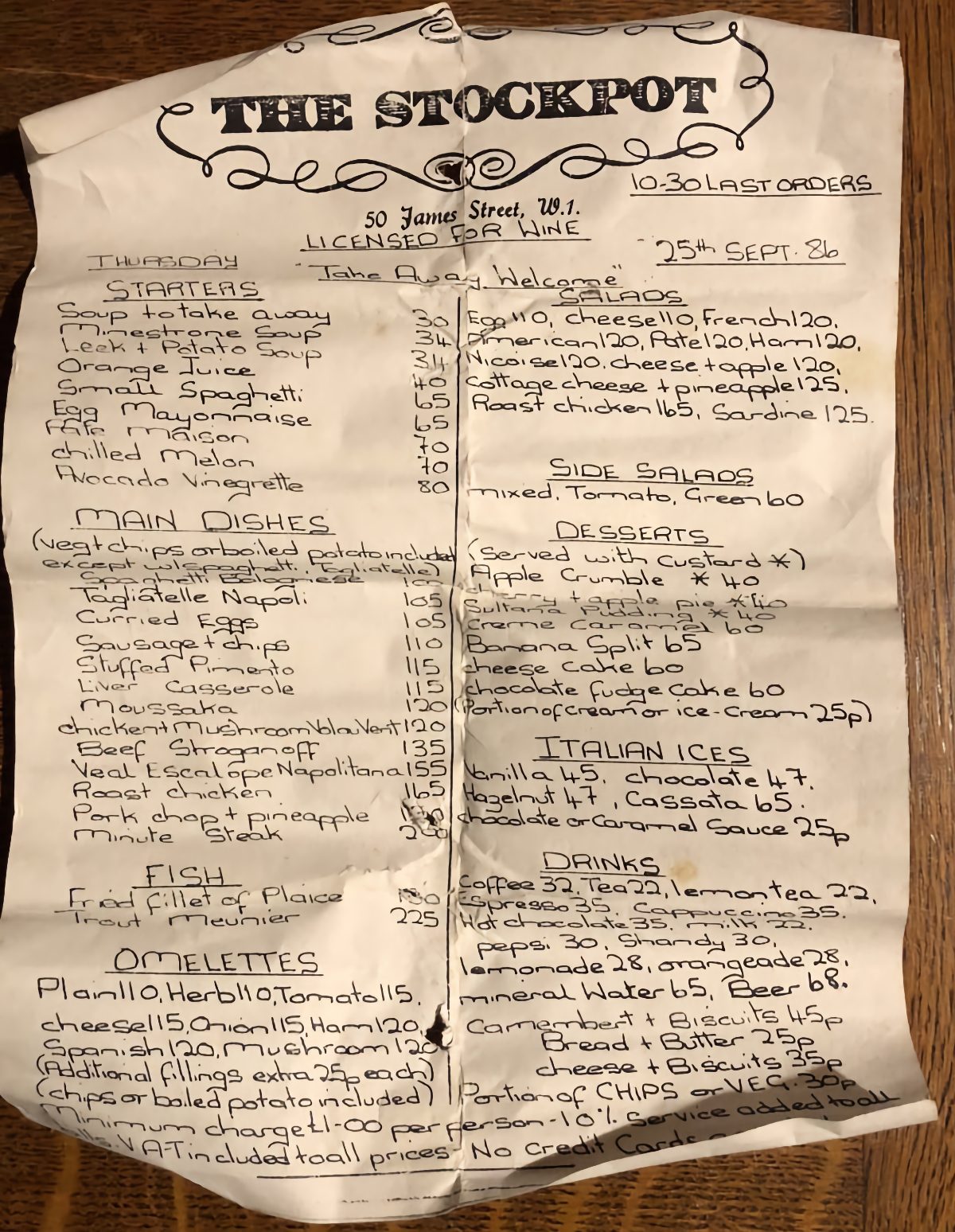 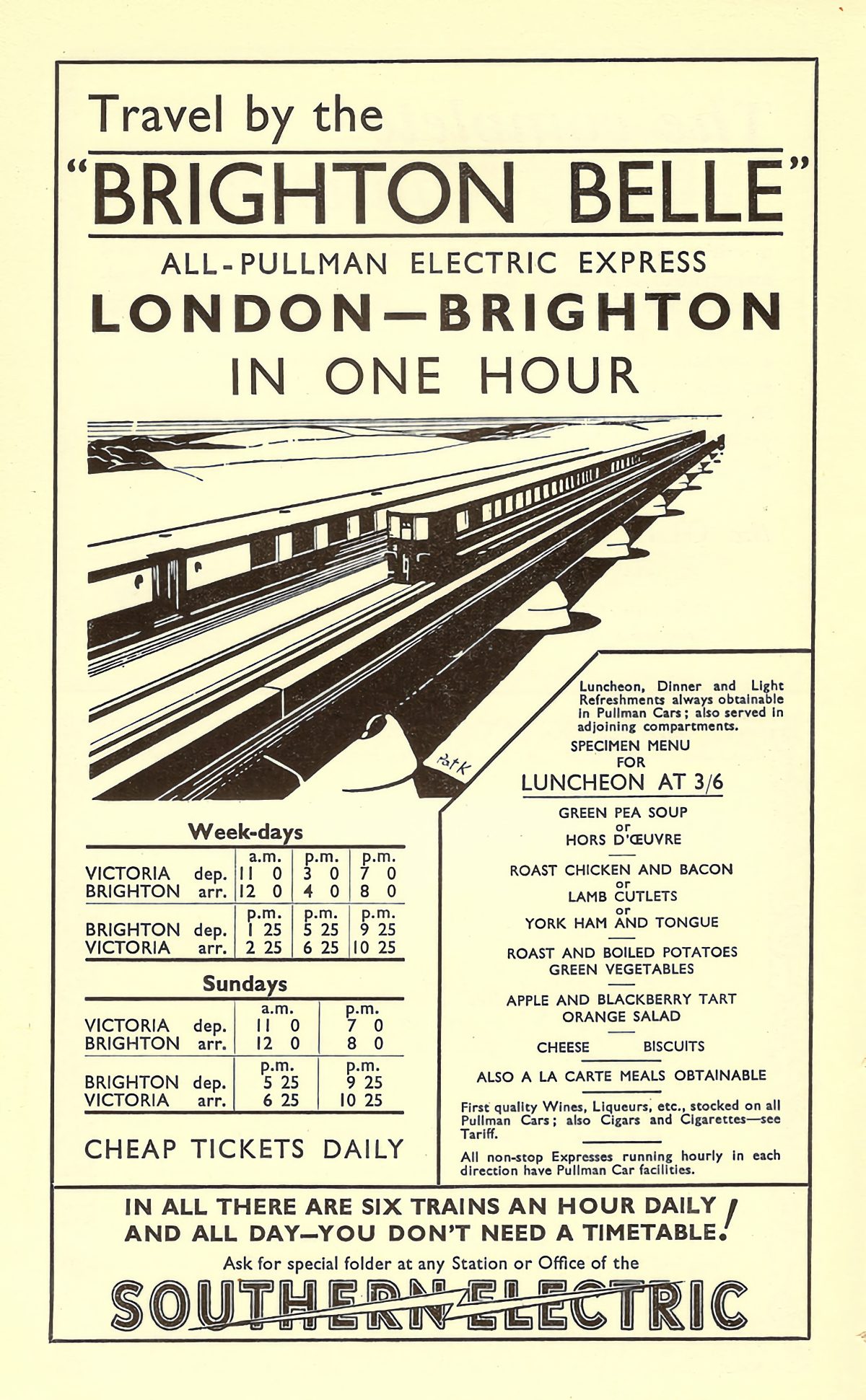 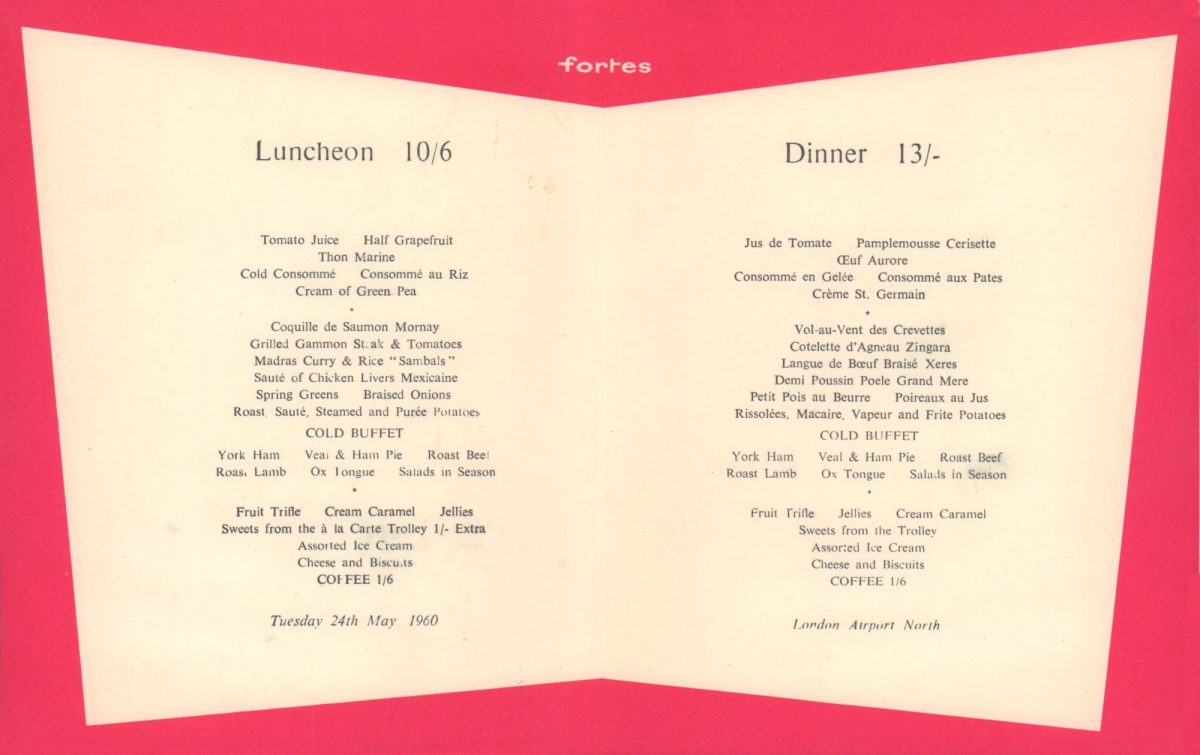 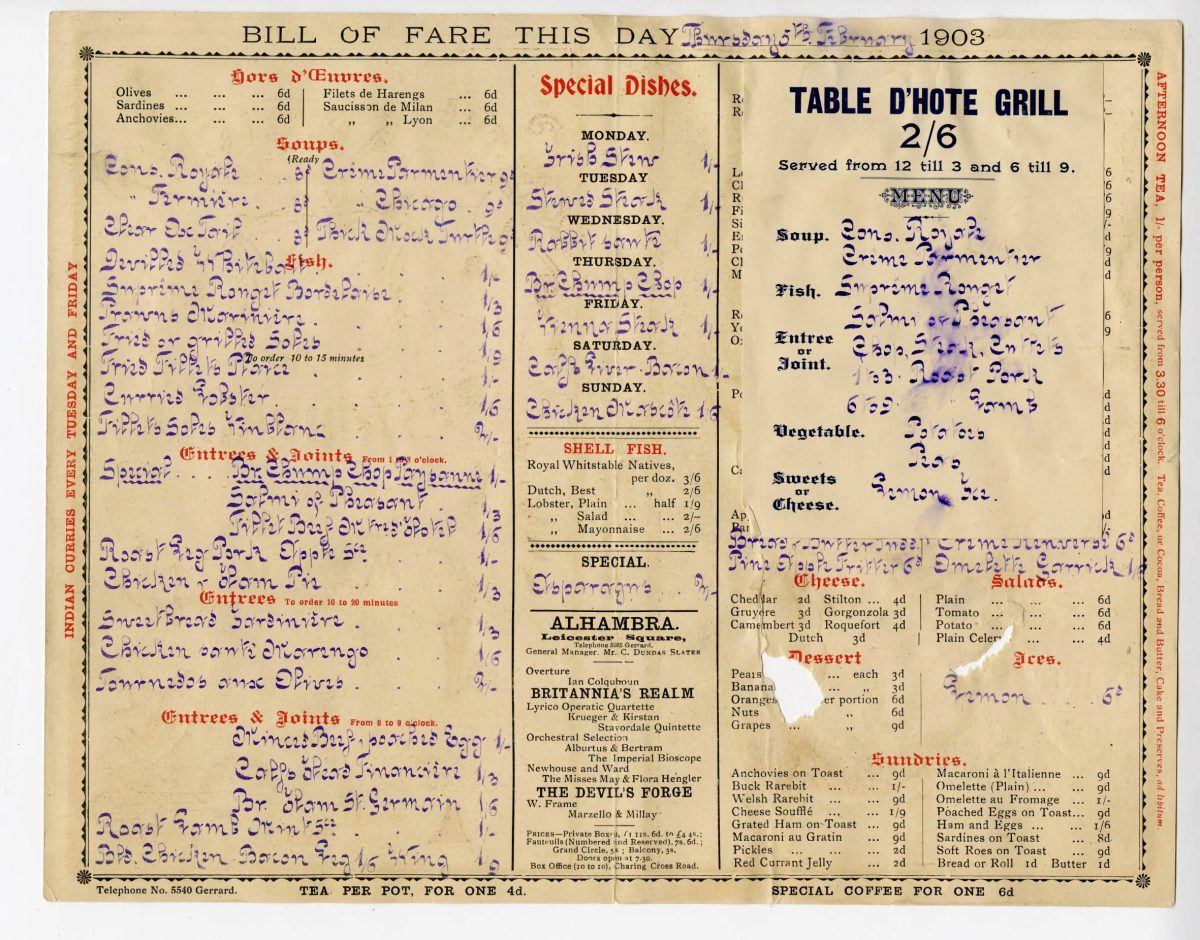 The Garrick Club’s menu on the 5th February 1903 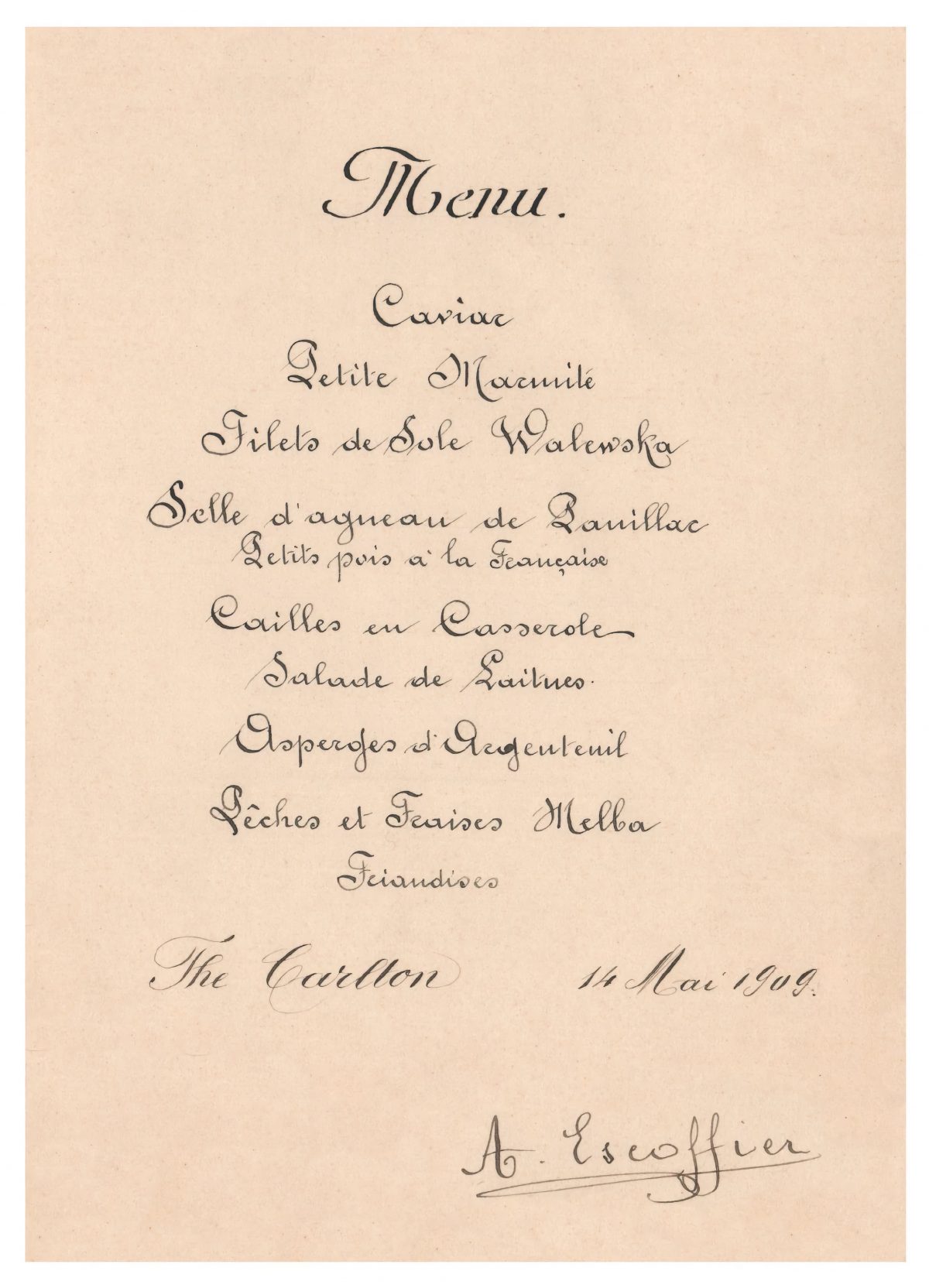