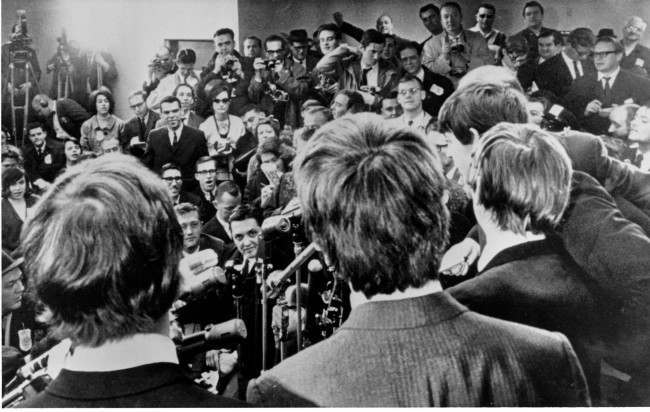 The Beatles face the media on arrival at JFK airport in New York City on Feb. 7, 1964. The British rock and roll group was also greeted by a screaming crowd estimated at 5,000. (AP Photo/Charles Tasnadi)

OF course, The Fab Four’s time in America is very well documented. No-one needs to know more about the whole Bigger Than Jesus thing and George Harrison’s ‘spotty youths’ comment when he visited the hippies on the West Coast.

However, less well documented are the mop-top knock-offs that The Beatles created. Garage bands and frat beat groups sprung up all over America after the mop tops played Ed Sullivan.

So, here’s 10 of the best American Beatle Bands or Fab Four rip-off records… and by the way, being a Beatle rip-off band is no bad thing at all! Feel free to chime in with your own!

The Byrds hit the jackpot when they took Dylan’s folk music and turned it into a Beatle beat. Perfect for the US market – homegrown lads (not like those British Invasion swine!) making Dylan’s nasal drawl more palatable. ‘Feel A Whole Lot Better’ is the choice here, but in fairness, it could’ve been picked from two dozen songs!

The Beau Brummels are a fantastically underrated group from The States, going from giddy Merseypop to creating two psychedelic gems in ‘Bradley’s Barn’ and ‘Triangle’. Early cuts were indebted to the Fabs and they landed a plum gig appearing on The Flintstones of all places!

Count V, a band made famous by Lester Bangs’ unswerving love of glorious slop, never amounted to much, but this primal take on British beat music, complete with bowl cuts and Beatle boots, is one of garage punk’s high water marks. Or low, depending on how you look at it.

Todd Rundgren – a man who fell out with Lennon and was at times, a one-man Beatles – was once in The Nazz. There’s ace beat hit ‘Open My Eyes’ took on the Fabs’ love of a riff (and beefed it up by ten) and added dreamy Beatle-esque harmonies over the top and shared Lennon’s love of a flange button.

We couldn’t NOT include The Monkees. Unfairly chided for all sorts of things, The Prefab Four took a lot from success of The Beatles and spun their own magic. They even hired a Manc to sing, because Manchester is near Liverpool and that’s close enough for Americans.

‘Lies’ is a golden and forgotten oldie and is unbelievably Beatlesy in places. If this came on the radio, there’s a good chance you’d think it was an album track from ‘Rubber Soul’.

Klaatu sounded so much like The Fab Four that they managed to get caught in the middle of a conspiracy theory that it was indeed The Beatles, releasing records under a different name.

Emitt Rhodes is a wonderful singer-songwriter. His albums go for pennies, when really, he should be fantastically popular. Regardless, one listen to his music and you’ll see that he owes a gigantic debt to Paul McCartney.

This beaty Macca-by-numbers track has all the hallmarks of a band in the throes of Beatle fandom.

Despite their irritatingly long name, WCPAEB creating some music well worth digging. Bonkers psych and oddball pop nestle alongside jangly Beatles-type songs, just like this one.