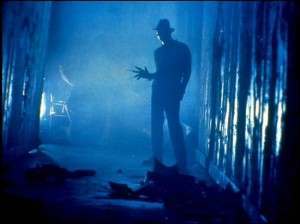 THERE’S an old saying that goes: “if you’re going to take a shot at the king, make sure you don’t miss.”

Such words of wisdom also apply to the movie monsters of the 1980s.

Thirty years ago, in 1984, Wes Craven’s “bastard son of a hundred maniacs,” Freddy Krueger (Robert Englund) rose up to become the reigning king of the horror film with the theatrical release of A Nightmare on Elm Street.  The Gloved One took New Line — “The House That Freddy Built” — straight to the top with him.

Between 1984 and 1989, New Line produced five A Nightmare on Elm Street sequels — and a TV series, Freddy’s Nightmares (1998 – 1990) — which featured the scarred, quipping maniac. One academic study conducted during this era suggested that more American children could recognize Freddy than they could Abraham Lincoln.

So the most pertinent question for other genre filmmakers was, simply: how do you unseat this pizza-faced box office juggernaut?

The genre media, including Fangoria, happily played this guessing game too.

Which new horror movie, asked the magazine, was going to be the next A Nightmare on Elm Street?

Who was going to become “the next Freddy?” 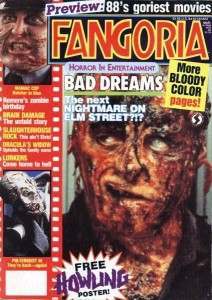 While Freddy’s cinematic success gave rise to the return of older screen monsters such as Halloween’s (1987) Michael Myers, The Texas Chainsaw Massacre’s (1974) Leatherface, and Phantasm’s (1979) Tall Man, the five “new” maniacs of the late 1980s featured below also sought to grab a foothold on the pop culture…and failed.

First, they arose out of the “rubber-reality” world.  In other words, where Freddy could shape and re-shape the dream-scapes of his teenage victims, these cinematic killers found other “alternate” worlds to control or dominate.   They came from books, TV transmissions, rock-and-roll music, and even from hallucinogenic drug use.

And secondly, these contenders to the throne were often — just like Freddy — loquacious, or quick with a bon mot. 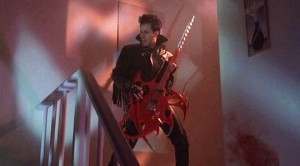 This sequel to the naturalistic 1982 slasher film, Slumber Party Massacre, re-imagines the franchise, post-Freddy, as a rubber-reality one.

Here, a survivor of the first film’s massacre, Courtney Bates (Crystal Bernard), rents a condo in Desert Springs with her girl-band mates, only to be terrorized by a demonic rock-and-roll star armed with a guitar-turned power drill.  In this case, the killer comes out of the dream world, and begins to make ridiculous quips related to the world of rock-and-roll.

For instance, when his drill breaks down, the Driller Killer jokes: “I can’t get no satisfaction.”

And when he is burned by the final girl, he urges, “Come on baby, light my fire.”

As if to acknowledge the film’s debt to Monsieur Krueger, Slumber Party Massacre 2 also names one of its (hapless) policemen Officer Krueger (Michael Delano). 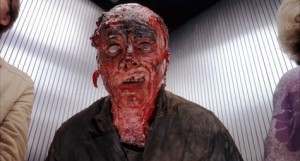 This horror film from director Andrew Fleming concerns a young woman, Cynthia (Jennifer Rubin) who awakes in the mid-80s from a coma after thirteen years, only to be haunted by the cult guru of Unity Fields, the commune where she lived in the Age of Charles Manson.

Franklin Harris (Richard Lynch) is the guru’s name, and he seeks to re-indoctrinate Cynthia at any cost.  He’ll do anything to get her back, including murder all of her fellow patients in group therapy.  This victim pool includes two sex addicts, a paranoid schizophrenic, and a depressed reporter (Susan Ruttan) who tells Cynthia that if she wants to fit into the eighties she is already “two divorces, a condo, and a yeast infection” behind the times.

One of the film’s most notable murders involves a tryst gone wrong, as two patients are pulped (by Franklin) in a whirring turbine fan.

In reality, however, Cynthia is unwittingly under the influence of hallucinogenic drugs, and that fact accounts for the rubber reality nature of Harris’s crimes.

Instead of the cult leader seeking to reclaim his “love child,” the film’s real villain is someone else entirely, someone else who stands to gain if Cynthia loses her mind.

Lynch’s Harris is more menacing and less verbose than many of the other characters on this list, but he still gets in a good menacing line or two, like his retort to a nosy reporter: “I could kill you right now!” 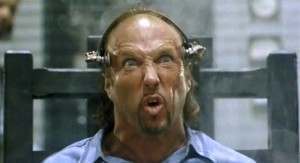 Although produced under the title House III, The Horror Show involves a villain, Max Jenke (Brion James), who survives as a ghost after being killed in the electric chair.  In his new form, the vengeful Max then threatens the man who arrested him, Detective Lucas McCarthy (Lance Henriksen) by terrorizing his family in suburbia.

In this case, Jenke is a wild-eyed variation on the Freddy formula, one who lives in an electrical plant instead of Krueger’s familiar boiler room.  Jenke’s way with the bon mot, however, is unimpeachable.

When zapped by the electric chair, for instance, Jenke quips, madly “That just gave me a hard-on!”

Featuring strong performances from Henriksen and James, The Horror Show is sunk only by the inconsistent rubber-reality scenes.

Jenke is somehow able to make his victims stumble into waking phantasms that may or may not be real, but it is never clear how he manages it.  It is also not clear why electricity both brings him back to life and is the thing that, finally, kills him. 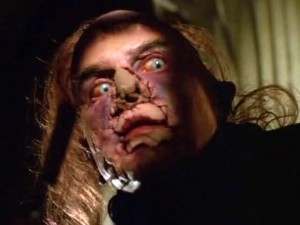 In this film, a sweet book store clerk, Virginia (Jenny Wright) becomes obsessed with the macabre horror novels of author Malcolm Brand (Randall William Cook), Much of Madness, More of Sin, and I, Madman.

After reading the latter text, reality begins to fold in on Virginia, and she starts meeting characters from the book, including a love-obsessed physician without a face.

This specter is Malcolm himself, and he sets out to surgically-reconstruct his visage using the features of Virginia’s closest friends.

In this case, the world of literature is our entry point into rubber reality murder scenes as the very act of reading brings literary characters to life, including the Boogeyman himself.

Even the film’s ending – a ludicrous deus ex machina – seems to arise directly from literary tradition and mechanisms. 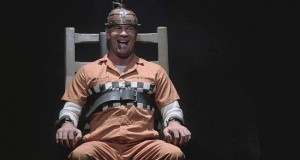 Like Jenke in The Horror Show, Pinker returns from the dead after being killed in the electric chair. Only now, he is a dark force able to transport himself through electrical current.  This means that he can literally “channel surf,” and appear inside different TV programs.

The last act of Shocker involves Pinker and his nemesis, Jonathan Parker (Peter Berg), chasing one another through several dozen TV programs on cable, including Leave it to Beaver and a rerun of the James Whale version of Frankenstein.

One vignette finds the opponents battling just feet from Entertainment Tonight anchorman, John Tesh. Another sees a televangelist, played by Timothy Leary, asking the home audience to send him more money – for God – when Pinker and Jonathan show up to make a mess of things.

In this case, then, the rubber reality world explored is actually our airwaves.

And Pinker, once more like Freddy, has a  dramatic way with words.  At one point, he eats a prison guard’s fingers and says “finger lickin’ good.”  At another point, he implores a victim to ride his “volts” wagon. 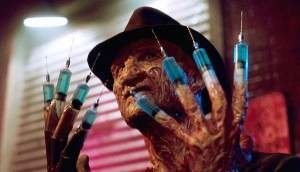 Alas, none of the aforementioned maniacs ever survived to see a sequel made, and that alone is evidence of their failure to unseat the wildly-popular Freddy.

Or as Freddy himself might say to such pretenders to his throne at this juncture:

“You think you’ve got what it takes? I’ve been guarding my gate for a long time, bitch!” 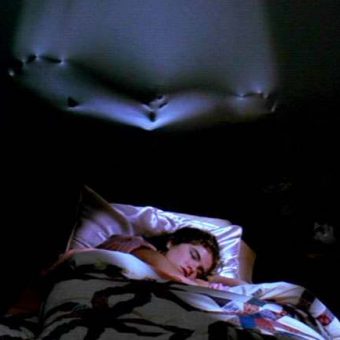 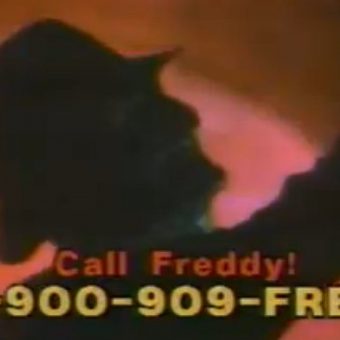 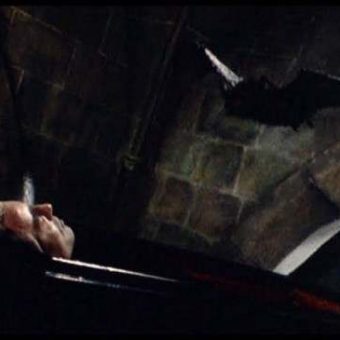 Back from the Dead: The 5 Lamest Horror Movie Monster Resurrections