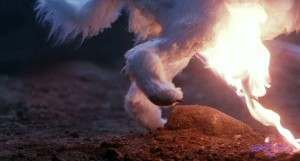 THROUGHOUT cinematic history, our most beloved monsters — from Dracula and The Wolf Man to Freddy Krueger and King Kong — have returned again and again to haunt our nightmares, and our movie screens.

In any horror movie or monster movie sequel, the primary challenge is thus always quite specific: how do we get our beloved monster back after so thoroughly and completely defeating him at the end of the previous movie?  How do we snatch defeat from what seemed like victory?

Some movie franchises have proven cleverer than others at threading this particular needle, finding fresh and inventive ways to get our beloved monsters stalking again.

Other methods of resurrection, however, leave something to be desired.  In fact, many on-screen resurrections have been downright ridiculous.

Below are the five lamest monster movie resurrections. Some are terrible in concept, and some in execution. A few unlucky movies — like A Nightmare on Elm Street IV: The Dream Master (1988) — can check off boxes in both those categories. 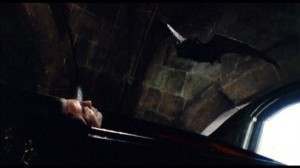 In this film from Hammer Studios — a by-the-numbers entry in its sturdy and long-lived Dracula series starring Christopher Lee — the menacing undead count returns to life in a ludicrous, slap-dash fashion.

A fake bat flaps its way into his Transylvania castle on wires.  The bat then obligingly spits globs of blood directly on the vampire’s ashes before flapping away on its prescribed wire-course, no fuss no muss.

The bat blood brings Dracula back to life and, lickety-split, it is business as usual

So did Dracula possess a living (or undead…) will instructing this bat to fly to his castle and vomit blood on his ashes in the event of his demise?

Even assuming the fact that normal bat blood can restore a destroyed vampire to life, why would a vampire bat just randomly fly in and accommodate Dracula in this fashion?  Can Dracula control vampire bats from beyond the grave, and if so, why hasn’t he used this fearsome power more than once in his long history?

In this late-eighties sequel to the 1976 Dino De Laurentiis production, we learn that the giant ape — after his apparently-fatal plunge from the World Trade Center — is still actually alive a decade later.  He has been in a coma, on life-support the whole time and is awaiting an artificial heart transplant.

The colossal size of King Kong, however, requires quite an operating theatre, and the movie reaches its zenith of absurdity when Dr. Amy Franklin (Linda Hamilton) begins the difficult surgery.  “Let’s go to work she says,” she declares solemnly as giant medical equipment is rolled into the football field-sized chamber.  That equipment includes gigantic saws…and a fork-lift.

Although the surgery is certainly colorful and inventive, with tiny Lilliputian-like doctors toiling on a giant, hairy patient, one has to wonder: why does Kong need a heart transplant?  He fell from the World Trade Center, and every bone in his body should be shattered.

So are we to assume that his giant bones have all been re-set in the ten years since his fall?

If so, the movie really missed a bet by not showing the giant, slumbering ape in traction.

At the end of A Nightmare on Elm Street III: Dream Warriors (1987), the audience learned that the only way to truly and finally kill dream avenger Freddy Krueger (Robert Englund) was to bury his bones in sacred ground.

The climax of that movie saw Detective Thompson (John Saxon) and Dr. Neill Gordon (Craig Wasson) doing just that.  They located his hidden bones in an auto-junkyard, poured holy water on them, and ended Freddy once and for all.

But not so fast!

By 1988, it was time for another sequel, and Freddy had to be restored to his killing ways.  Accordingly, A Nightmare on Elm Street IV’s first dream sequence finds a surviving dream warrior, Kincaid (Ken Sagoes) ending up back in the dream equivalent of the auto junkyard.  He watches in horror during his dream as his dog — named Jason — walks up to Freddy’s bones and pisses on them, de-sanctifying the holy ground, essentially.

Actually, my description isn’t complete.  The dog urinates fiery piss on Freddy’s bones to resurrect him.

Here’s the problem with this scenario. The dog is a dream artifact, part of Kincaid’s sleep. In point of fact, the auto-junkyard is also an artifact of Kincaid’s dream.

So basically then, all that Freddy required to come back to life on Elm Street was for someone to dream of a dog pissing on his grave.

A real life dog didn’t even have to do it in the real world.

In fact, not a soul had to go to the actual location to affect Freddy’s real bones.  Just the thought of pissing on dream bones is enough to bring Mr. Finger Knives back to life. 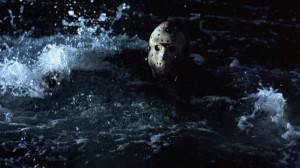 As Friday the 13th sequels go, The New Blood isn’t all bad as it is set-up, essentially as a match between Crystal Lake’s famous slasher, Jason Voorhees, and a Carrie-stand-in named Tina (Lar-Park Lincoln).

Much like Stephen King’s Carrie, Tina possesses fearsome psychic powers, and these powers extend, apparently, to the resurrection of the dead.

So a traumatized, teenage Tina visits Crystal Lake and the spot where her father drowned years earlier.

She walks to the end of the pier, looks over the lake, and under the guidance of her psychologist, Dr. Crews (Terry Kiser) attempts to face her emotional pain.

Instead, Tina’s psychic powers reach out from her turbulent mind to revive her much beloved father and…

That’s right, Tina’s mind-directed powers go right past her dead father and hit Jason’s corpse, instead, bringing the hockey-masked killer back to life.

This lame monster-movie resurrection asks us not only to believe that a teenager can resurrect the dead with psychic powers, but that such a specific power is actually random in its direction, and can miss the intended target. 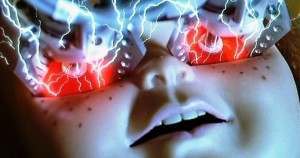 The original Child’s Play (1988), ended with the evil doll Chucky (Brad Dourif) burned to a crisp, decapitated, and missing an arm and a leg.

The 1990 sequel opens with Good Guy technicians poring over his plastic corpse and re-assembling him.  They even scrape his crispy teeth, in an all-out (but woefully-misguided…) effort to determine why the smiling, freckled toy became murderous.

As one might guess, this research goes badly…during the film’s opening credits, actually…and Chucky comes back to life to electrocute a Good Guys employee.

This opening raises so many questions. How did the Good Guys Co., get its hands on the doll anyway, since the corpse is evidence in an on-going police investigation?

And really, what research could possibly explain a doll walking, talking and stalking, all with no batteries?

And if you actually believed that a plastic doll did come to life to wreak havoc and perform voodoo rituals, wouldn’t you take some minor precautions upon attempting to put Humpty-Dumpty back together again?

Instead, Chucky awakes, kills his benefactors, and begins the long march through many more sequels.