You can watch the special in its entirety; however, I highly recommend you read this article first.  If you haven’t seen it, trust me, you don’t know what you’re in for.  Some preparation and background is in order.

Flashbak focuses a lot on oddities of the 1970s, and this one, dear readers, takes the cake. I would be derelict in my duties as a Flashbak writer to not serve up a detailed and accurate account of the Mother-of-All-Halloween-Weirdness, The Paul Lynde Halloween Special of 1976.   This insane special should be adapted for film, it should be a required course at every university, the transcripts of The Paul Lynde Halloween Special should be like China’s Little Red Book  – committed to memory and required in every home.

So, what’s the big deal?  Let me count the ways.

Okay, so let’s imagine it’s the evening of October 29th, 1976, and you and your family are settling down in the den to watch a Halloween special on the TV. Your dad is in the Barcalounger drinking a cold one and your mom is paging through the TV guide. She reads aloud that it’s hosted by Paul Lynde…. 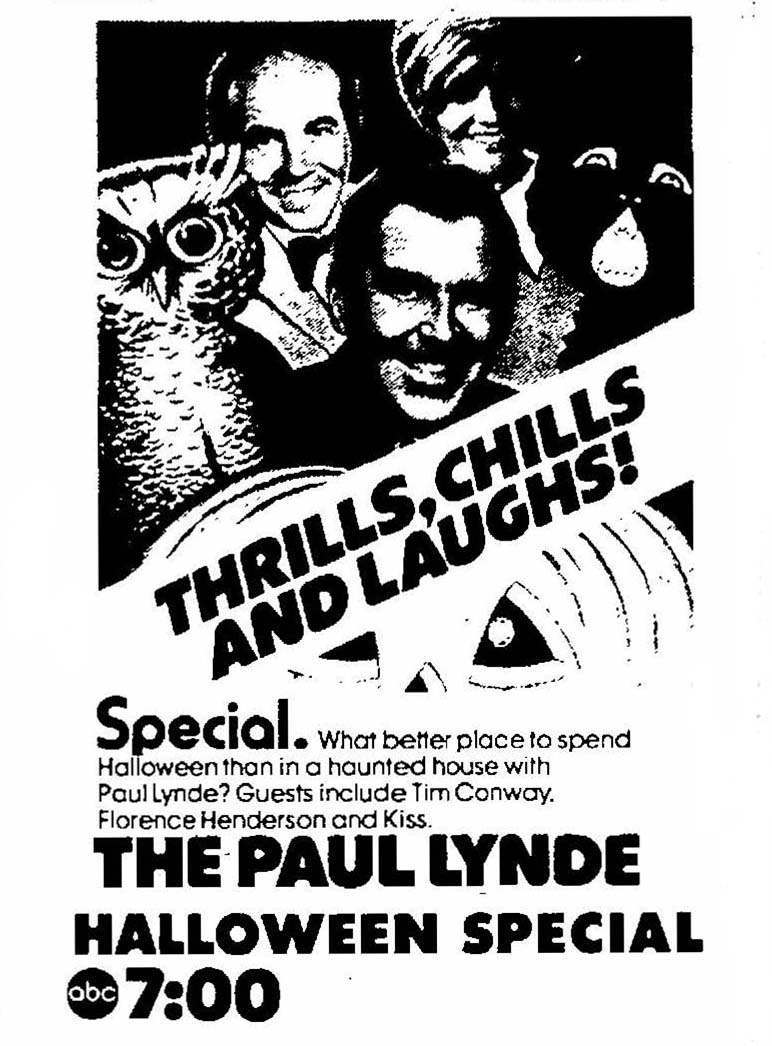 “That’s that fruity guy on Bewitched,” says dear ol’ dad. “This should be rich.”

The commercials are over, and this is what you see….

Lynde is dressed as a Santa Claus then the Easter Bunny, evidently confused as to what holiday it is. His maid, played by Margaret Hamilton (the Wicked Witch of the West from The Wizard of Oz!) explains that it’s Halloween. Insert a canned laugh track and roll the opening credits..

Then the opening monologue. The jokes are not just bad, they’re historically bad. Here’s a little taste: 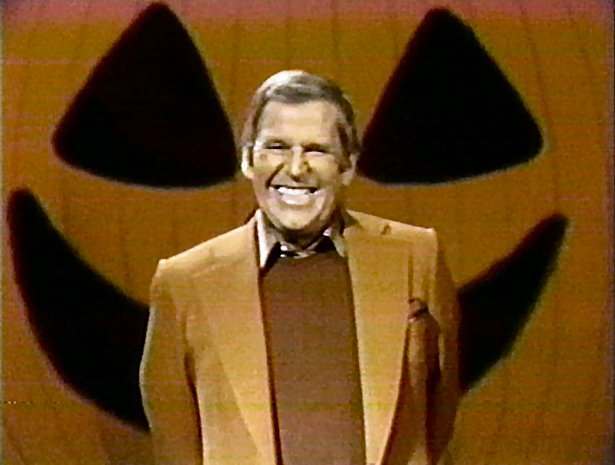 “[On Halloween] I always give a prize for the funniest costume. Last year, I said First Prize will go to the first one that rings my bell. It was the Avon Lady [insert canned laugh track]. So, I gave her a box of Ding Dongs.” [huge laughter from audience] “You know, they’ve got no sense of humor. She smeared my windows with soap-on-a-rope.” [more laughter]

Next Paul sings a sweet little ditty about how much he loves Halloween. (Lyrics: “Kids, when they ask for goodies, they’re awful sweet… I give them yummies!”) Audiences at home probably thought they were in for a special more in line with Perry Como or Andy William’s numerous and blissfully wholesome holiday specials. Little did they know things were about to bite the wax tadpole… (sorry, no other euphemism would fit).

As the desceptively benign song progresses, we can see sanity unraveling. Dad in the Barcalounger was about to learn real quick that this was no Perry Como special…. 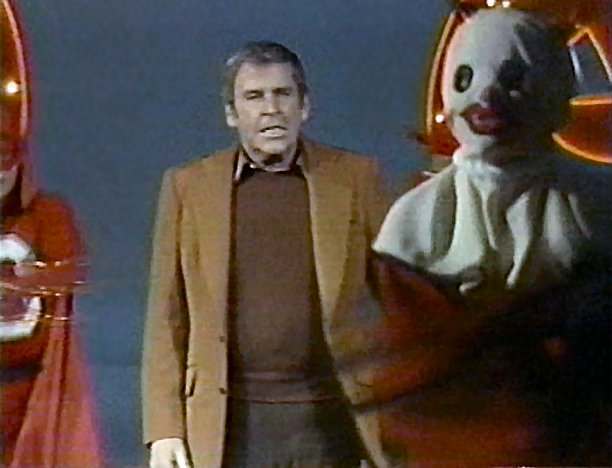 SWEET FANCY MOSES IN A SIDECAR! Some of the dancers that take the stage look like evil incarnate. These dancers, straight from the 9th Circle of Hell, wrap Lynde in a rope and throw him in a trash can. For a brief second, I was reminded of The Wicker Man, and half expected these pagan dancers to light him on fire!

To make matters even more bizarre, Donnie and Marie Osmond appear out of nowhere as sequened witches. They put the lid on the trash can and it explodes…. things are officially ‘off the chain’ at this point. 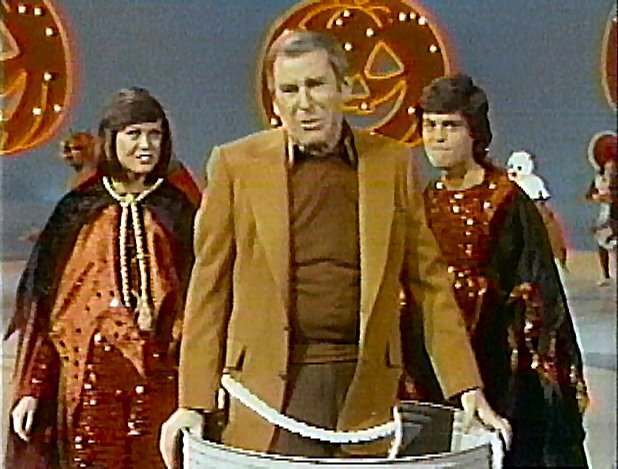 (Note: I apologize for the quality of some of these pictures. There simply isn’t a good copy of The Paul Lynde Halloween Special in existence – the quality of the DVD is worse than VHS recorded on slow play.)

Next, our story begins to unfold. Margaret Hamilton takes Lynde on a road trip to her sister’s house in order to get him away from those “pesky kids”. It turns out to be a sinister manor out in the middle of nowhere. But guess who Hamilton’s sister is…. it’s Witchiepoo!  You may recall that Witchiepoo was the creation of Sid and Marty Krofft. These two guys were responsible for more child oriented strangeness than I have time to mention. 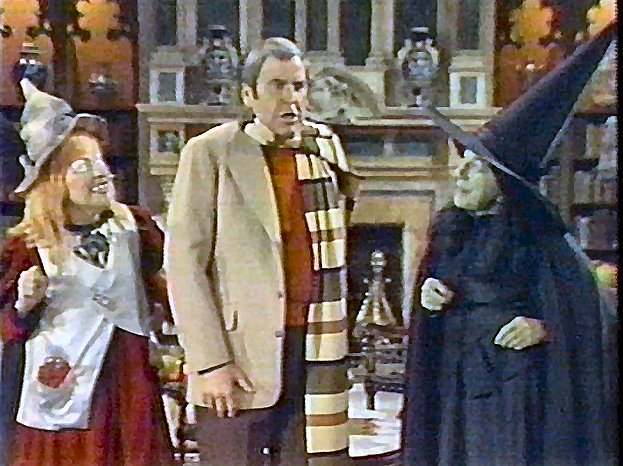 So, Lynde,against his better judgment, enters the haunted mansion. Here it is revealed that Margaret Hamilton is a witch as well. This is interesting because it’s the first time she dressed in full witch garb since The Wizard of Oz!

Before I had a chance to catch my breath, Billy Barty strolls out (queue short people jokes from Lynde) and then Betty White. 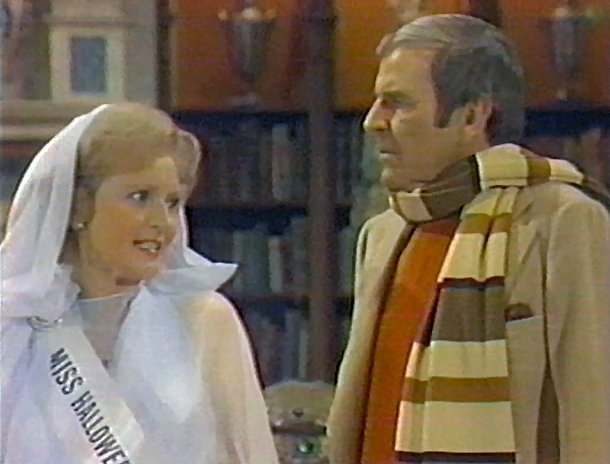 White plays the winner of a Miss Halloween contest and expected Paul Newman as her prize, not Paul Lynde. This was right during her reign as queen bitch on The Mary Tyler Moore Show, so her role as a witch was particularly fitting, and audiences of the 70’s got the connection.

Miss Halloween quickly gets out of there, and the two witch sisters inform Lynde that they want him to be the spokesman for the National Association of Witches. Why? Because he’s close personal friends with Donny and Marie Osmond (Lynde was a regular on their variety show). In return for being their spokesman, they offer him three wishes. 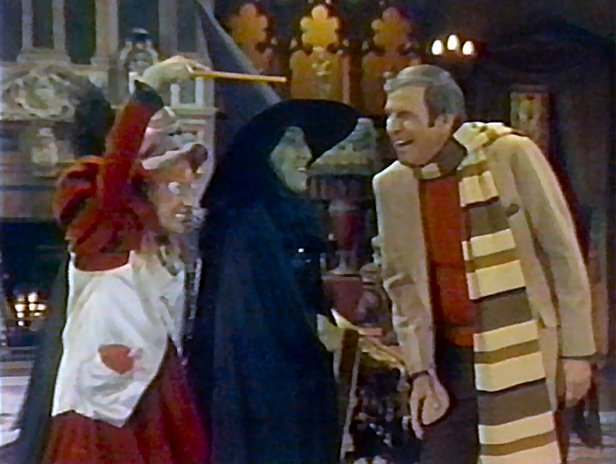 What does our loveable lush wish for? Keep in mind, in 1976, Lynde lived with his pooch in an opulent mansion in the Hollywood Hills (once owned by Errol Flynn). So, perhaps he’ll wish for a delux penthouse at the The Sands? Maybe his own personal mega-yacht with plenty of muscular manservants? Or a sitcom of his own, in the time slot right after Mary Tyler Moore! No….. Paul’s first wish is……. DEAR SWEET MERCIFUL ZESTY ZITHER OF ZEUS!!…. to be a rhinestone trucker!!! 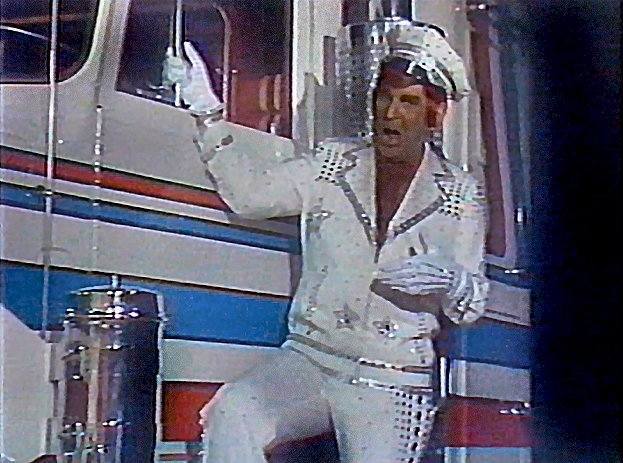 I mean who gets to wish for anything in the world, and chooses to be a bedazzled trucker? Lynde’s getup puts Liberace to shame – I do believe anyone showing up to a truckstop like this would have a very short lifespan. 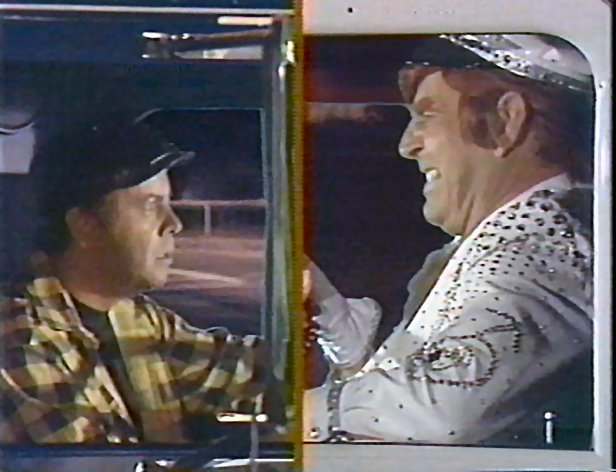 Indeed it is – a waitress by the name of Kinky Pink. Now it’s a race to the diner; first one there gets hitched!
The action now turns to the diner where we find that the Kinky Pinky  is played by none other than Pinky Tuscadero (Roz Kelly) from Happy Days.

Ultimately, The Rhinestone Trucker wins the duel for the lady. He has a wad of cash that lures Kinky to his side. Where’d he get the money? He says he got it for starring in a movie called “Deep Trucker”. Obviously, this is a play on Deep Throat…. nothing like a little hardcore pornography humor in a holiday TV special!

Next, we are treated to a bizarre wedding ceremony complete with sequen spangled dancers and disco lights. Instead of a disco song, however, it’s a square dance…. go figure.

This odd little spectacle fades back to Witchiepoo’s castle, where the witches recommend a little music for Paul. Bring on the musical guest! Who will it be? Well, let’s see…. given that we’ve so far we’ve seen a variation on a Bye Bye Birdie number, a square dance, and Donnie and Marie Osmond, I guess we should expect someone like Paul Williams or maybe Dinah Shore?….. Nope. GREAT SHADES OF ELVIS! IT’S KISS!!!

Yep. This is the last thing ’76 audiences saw before going to commercial break – KISS kicking total ass and taking names, complete with pyrotechnics and “Detroit Rock City”! I am sure dad in the Barcalounger was left asking himself, “What the hell just happened?” One minute we’re watching a hoe down with Tim Conway, the next minute KISS! If Gene Simmons had literally come out of the TV and spit blood in our face, it would’ve been no more shocking.

After the commercial break, we find that Lynde has accidentally wished himself into the Sahara Desert. He is a suave sheik named “Florence of Arabia” who wins the heart of a British heiress. They kiss madly with loud orgasmic grunts and moans. Exactly who is this young woman locking lips with Lynde? Why, it’s none other than…. SWEET LINCOLN’S MULLET!! THAT’S MRS. BRADY!!! 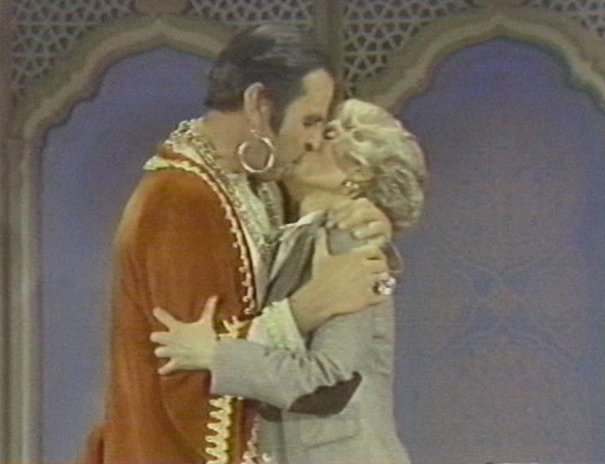 My eyes! My eyes! These two really go at it – I wouldn’t be surprised to learn that an NC-17 copy of The Paul Lynde Halloween Special exists somewhere. Mercifully, the if there were a hardcore sex scene between Uncle Arthur and Carol Brady , it wound up on the cutting room floor. 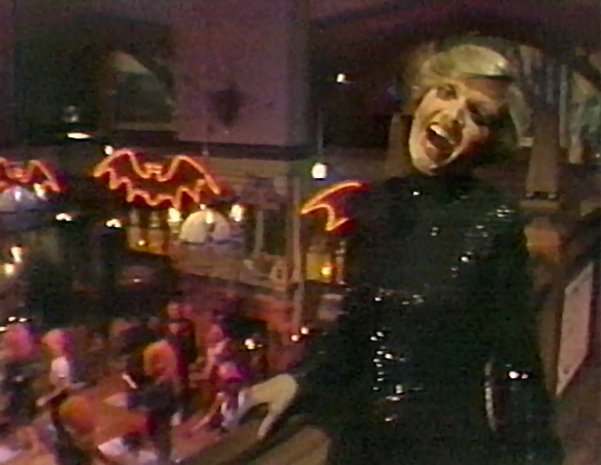 Back at the haunted mansion, Lynde is feeling giddy and wants to give his third and last wish to the witch sisters. Naturally, they wish to go to a disco. Presto! The haunted mansion is transformed into a Halloween themed discoteque and we get to hear Florence Henderson sing a disco version of “That Ol’ Black Magic”.

UNCLE JOHNATHAN’S CORN COB PIPE! THIS IS TERRIBLE! I grew up listening to Louie Prima’s version of the song. I mean, there are certain songs that just don’t lend themselves to a disco beat: “Bridge Over Troubled Water”, “Free Bird”, and this song.

Next up is another KISS performance. The initial shock and awe has worn off by now, so I’m able to actually enjoy it. Peter Criss is at the piano singing “Beth” – I know it’s a sappy song with too much orchestral arrangements, but I’ve always loved it. Then the Kings In Satan’s Service put on an incredible performance of “King of the Nighttime World”. At the end, we get to see Gene breath fire!

Unfortunately, my happiness did not last long. In the segment, KISS strolls over to chat with the witch sisters and Lynde….WHAT IN THE NAME OF SAINT DAMIEN’S BEARD IS HAPPENING? THIS IS HORRIBLY AWKWARD! I don’t think I am too far off base by saying this is the strangest most painful meeting in recorded history.

What can I compare this to? Maybe a meeting between Alan Thicke and Johnny Rotten….. or Ghostface Killah and George Will. Lynde’s jokes keep falling flat, and KISS keeps staring at him like he’s an effeminate alien.
Mercifully, the show is now at its end. The whole gang, Roz Kelly, Tim Conway, the witches, and Florence Henderson gather round for a particularly embarrassing rendition of “Disco Lady”. A fitting end, I think…. and now I think you have been briefed enough to watch the special from beginning to end. 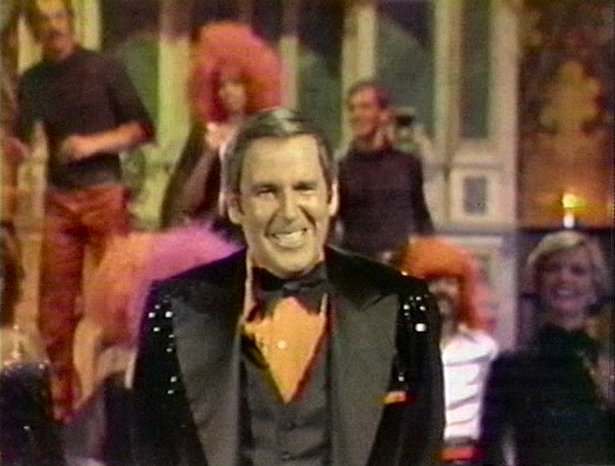