I COMPLETELY understand that the “sex sells” approach makes sense for certain consumer goods:  sports cars, cologne, and alcohol go hand-in-glove with sexually evocative marketing.   It has its place within our consumer culture.  That being said, sometimes it’s completely unnecessary.  (Let’s be clear: not “unwanted”, just “unnecessary”.)

In decades past, when the family pocketbook was primarily ruled by men, you had the “sex sells” tactic occurring a lot more often and in places that seem strange to modern sensibilities.  Back then, it was easy: men’s tastes were and are completely predictable.  Just insert a little cheesecake, and you have a willing male consumer in the palm of your hand.

Today’s consumers come in both genders, and are not so easily swayed.  Let’s have a look back to a time when the “sex sells” approach was applied to everything from antacids to snow blowers: sexual advertising where you least expect it. 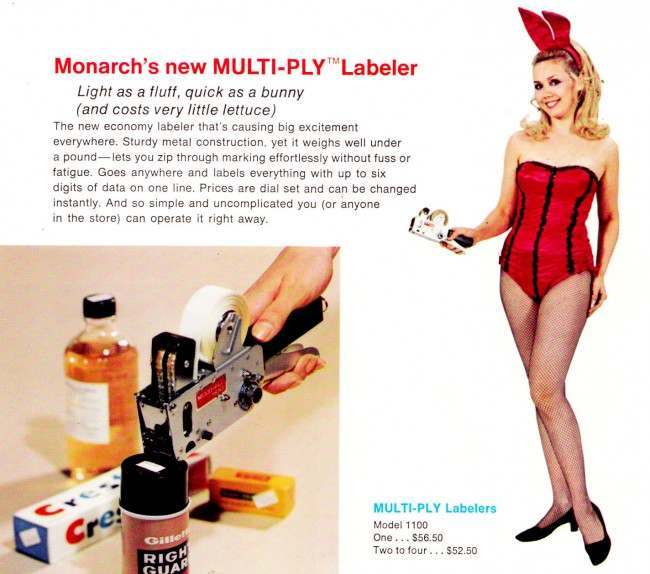 Do we really need a Playboy bunny outfit to sell an office labeler?  I’d imagine this would go over badly in today’s climate; however, in ’71 it was the men who’d be managing the stores and buying such products.  Maybe it makes sense for its time – something to consider for all the adverts in this list. 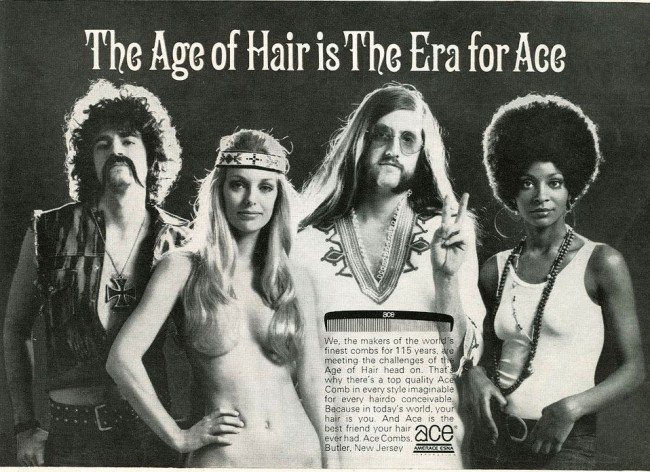 Question for Ace: Was it really necessary to have a topless chick in your comb advertisement?  I get that they’re trying to tap into the hippie vibe, but was this seems a tad gratuitous.

“It’s the one thing a man never turns down…. A second helping of rice.”

Hmmmm. I wasn’t thinking of rice – unless this is some sort of code word.  In which case, try to avoid the “sticky rice”. 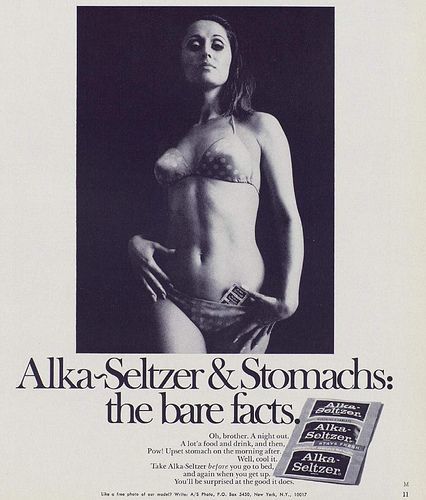 Okay, a packet of condoms deserves this treatment… but an effervescent stomach pain reliever? 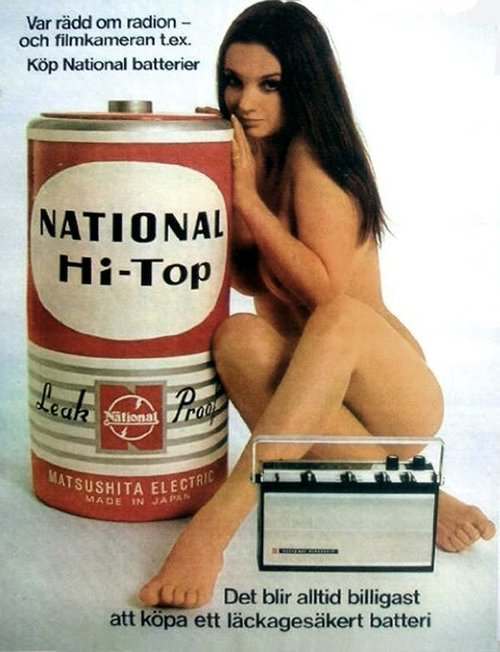 No need to use Google Translate.  It says: “We have every expectation that this fully nude woman will inspire you to buy our batteries.  Other brands may last longer, but ours has a naked chick.” 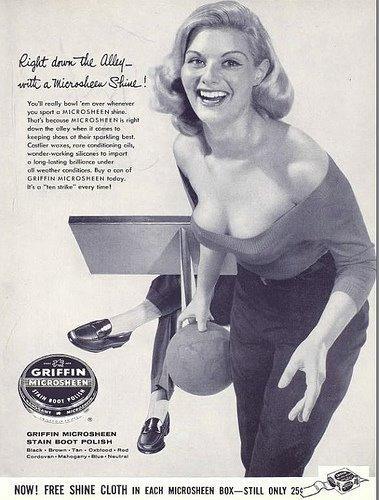 Boot polish is the least sexy thing on Earth; yet, this boot polish advert makes it all about the boobs.

Oh, wait.  Did I just say boot polish was the least sexy thing on Earth? Correction: Make that Ammonium Sulfate. 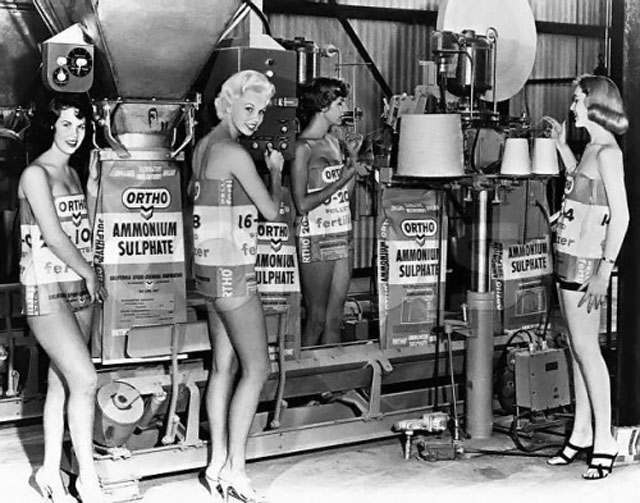 I doubt I’ll ever need any, but I’m off to buy some ammonium sulphate right now!  In fact, I’ll take two bags, please. 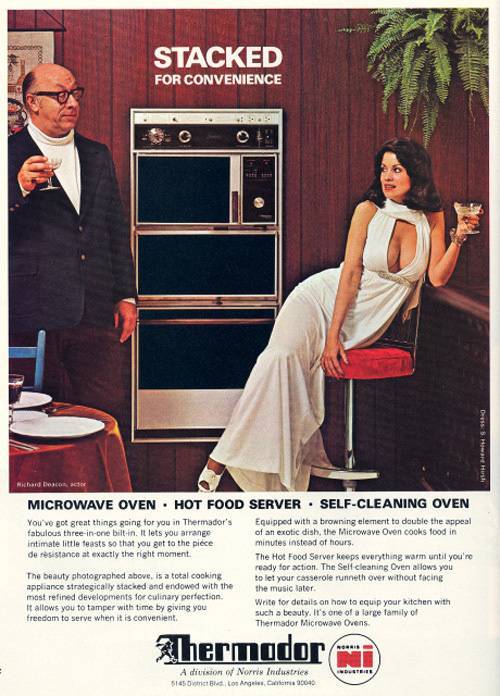 The Thermodor advertising execs obviously heard the product they were trying to sell was “stacked” and simply couldn’t help themselves. 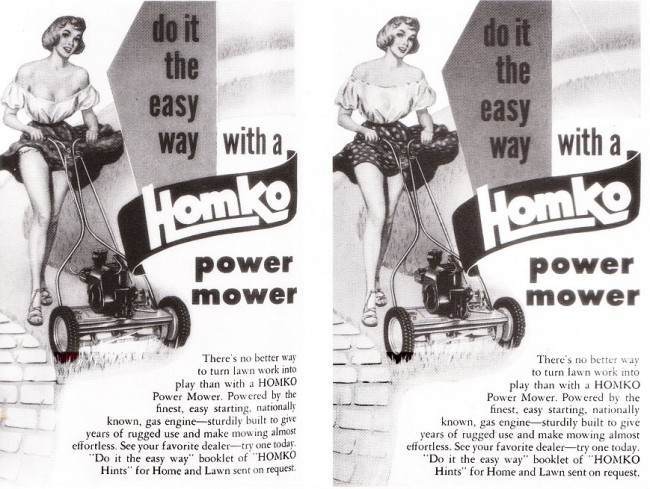 This power mower ad is a famous example. The advert appeared in House Beautiful magazine in April 1952, but the following month the woman’s dress had somehow become slightly longer.  Who ordered her skirt to be repainted? Advertising mythology blames the account client’s wife.  No one knows for sure. 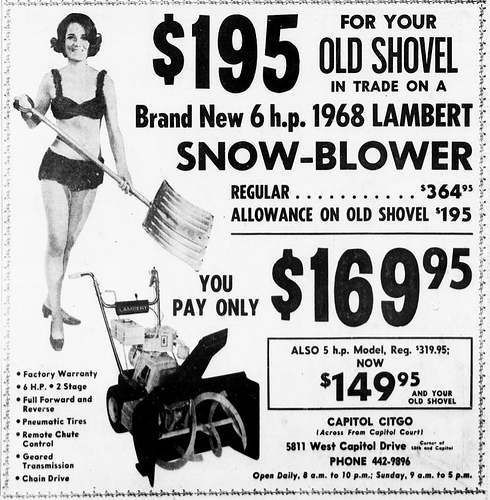 If you’re wondering why a woman would be shoveling snow in a bikini, you’re thinking too much.  Just let the “sex sells” technique wash over you; submit to its power. 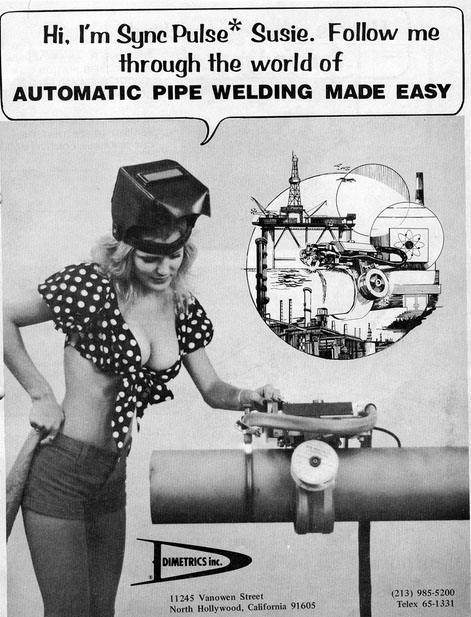 I understand.  The vast majority of welders are men.  I get it.  Cleavage on the manuals seems to be stepping into the gratuitous zone.

Note: I’m still searching for Mother of All Senseless Sexual Adverts  – The Regal Gas Chlorinator Gal.  Legend has it that the ads in trade magazines would feature a nude lady caressing her gas chlorinator with the naughty bits covered by conveniently placed banners.  Those interested in seeing the uncensored version could send a postcard to the company.  If you have an example of this advert, please submit the link and put this legend to bed. 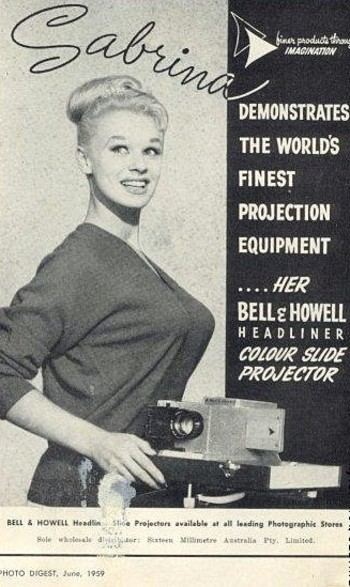 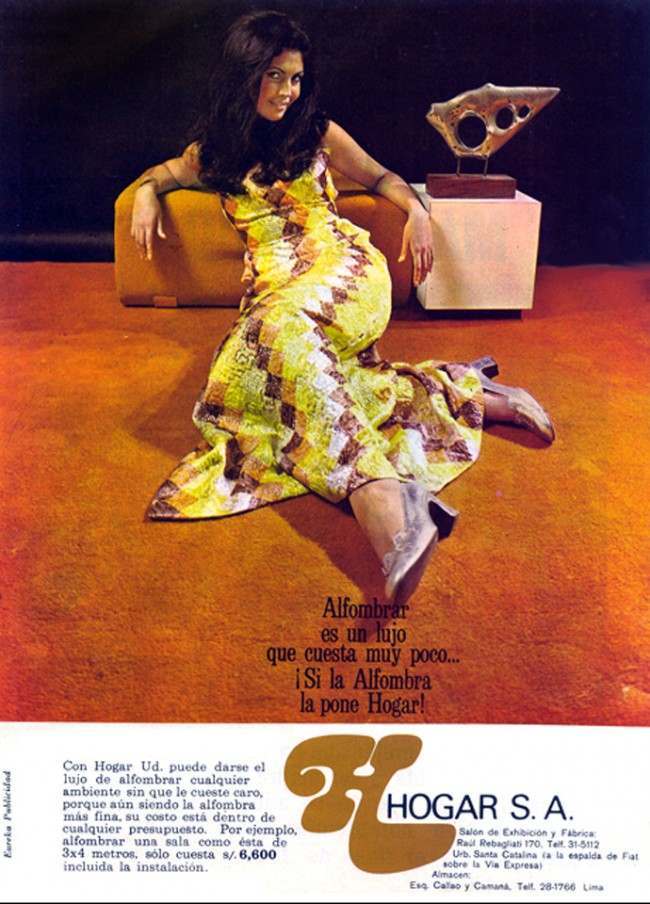 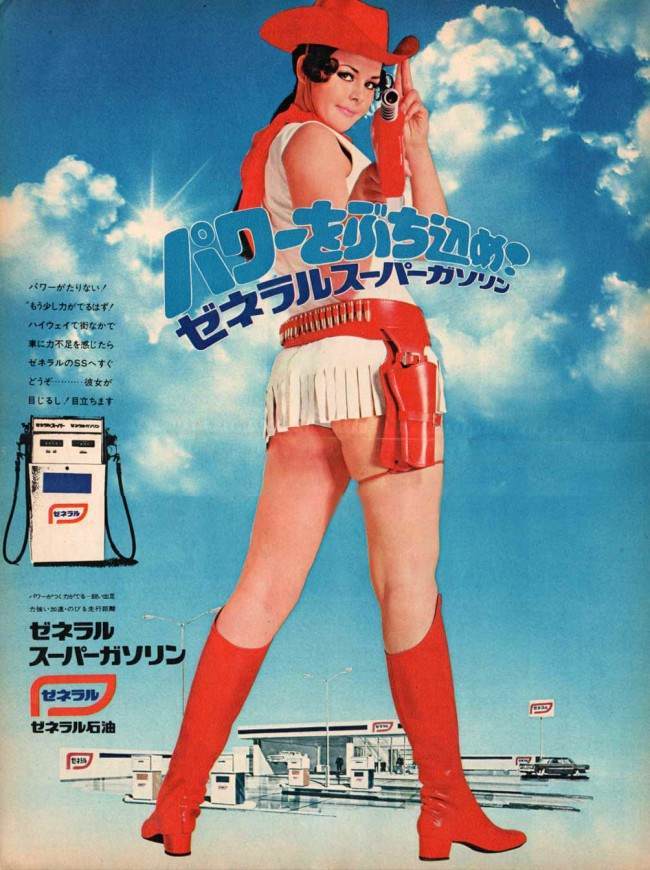 Not only does this make me want to fill my tank up at this station, I also want to renounce my citizenship and move to Japan.  I want to live in a place where ads like this don’t seem strange. 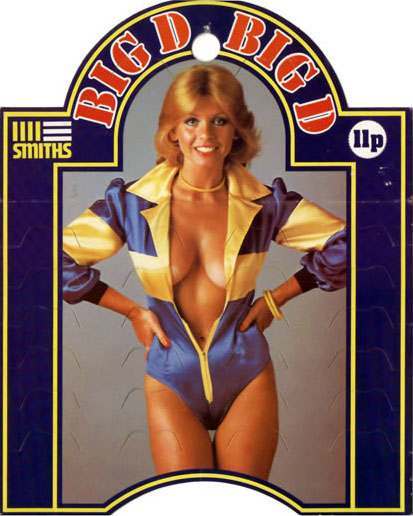 To those unfamiliar with the product, it seems really strange to have such explicit marketing for nuts – until you realize they are primarily sold in pubs.  Then it makes perfect sense, I suppose.

The babe board (pictured above (more here)) was a stroke of genius: a display of the Big D girl obscured by packages of peanuts.  As people purchased the packs, the picture would become more and more revealed. It never featured nudity, but did sell a hell of a lot of nuts.