THROUGH the decades, there’s been mayhem aplenty up on the big screen. So, I won’t pretend to capture even a small percentage of the most egregious perpetrators. However, I do have a list – and everyone loves lists.

These are scenes which make you stare incomprehensibly at the screen wondering if this all is some sort of fever dream; at any minute you expect to wake up in bed, relieved that none of this was real. Ah, but it was, and I’m not talking about trippy Stanley Kubrick stuff – I’m talking about the odd, the gratuitous, the inane, and the “What the hell just happened? Did you see that?” Buckle your seat-belts, folks it’s going to be a wild ride.

This film, starring Barbara Eden, is supposed to be based on the titular song by Jeannie C. Riliey. Funny, I don’t remember Jeannie singing about stealing a circus elephant, painting it pink, and having it bust through a P.T.A. member’s home. I must have forgotten that verse. 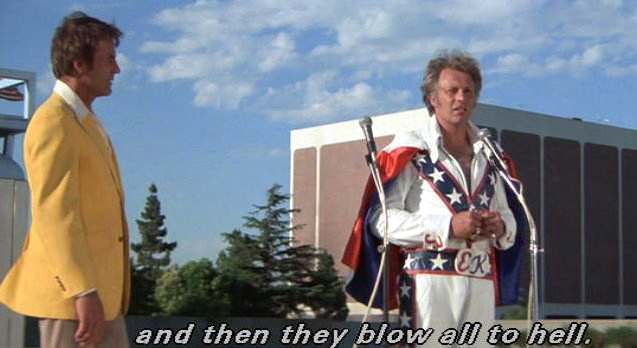 All within this one film, Knievel helps an orphanage, unites an estranged father (Gene Kelly) with his son, defeats a drug lord (Leslie Nielson), bags a beautiful babe (Lauren Hutton), and of course performs a ton of kick-ass stunts. However, Knievel’s shining moment in the film is his anti-drug speech. Truly I say unto to you, do not go through life without watching this scene at least once.

“Before I make the jump, there’s something I’d like to say to you, that’s been bothering me for a long time. I go to Indianapolis every year to see the Indy 500. I go there with friends to drive and race. Every year when they go there to qualify, they usually have to go as fast as they possibly can to get a front row position. They put nitro in their cars sometimes, instead of the fuel that is intended to be in the cars so that the cars will go faster…and they do, for five or ten laps. And then they blow all to hell. And you people, you kids, if you put nitro in your bodies in the form of narcotics, so that you can do better, or so that maybe you think that you can do better, you will for about five or ten years,…. and then you’ll blow all to hell.”

By no means is this the only painful use of the English language. Awkward verbiage abounds… 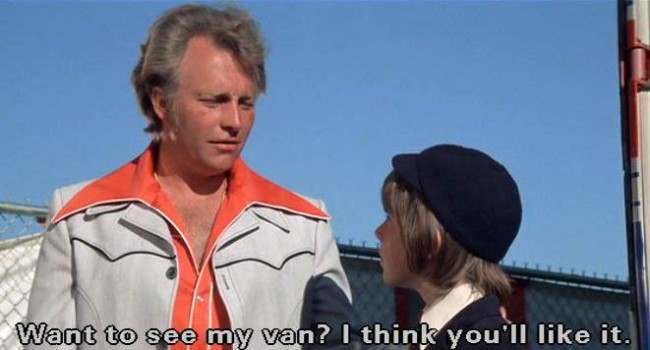 This is the actual scene with subtitles on. No embellishment required.  Let this serve as a public service announcement to any children who happen to be reading this: If Evel Knievel invites you into his van, run – run as far and as fast as your little legs will carry you.
Knievel does earn cool points for rocking a shirt collar with a mighty impressive wingspan. One wonders if this was his trade secret. His collar’s aerodynamics perhaps gave him longer air time to do his jumps. Just a theory. 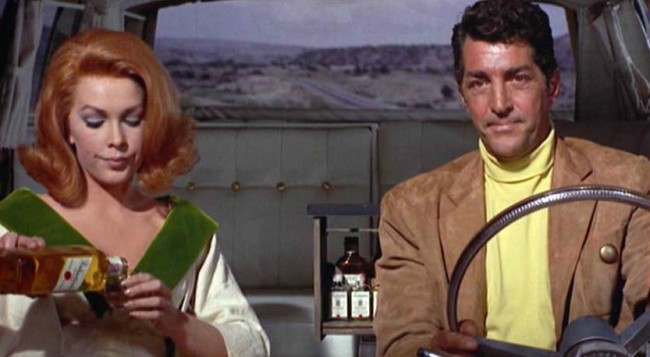 Without the slightest sense of irony, Dean Martin cruises on down the highway doing shots with Stella Stevens. There’s even has a wet bar built into his car! I understand that the stigma of drinking and driving wasn’t as it is today, but this is still jaw dropping to watch.

Granted, Dino acts in this picture like he’s been hitting the sauce since the first day of filming – he’s half awake and slightly slurred for the better part of the film. Tipping back some Scotch from his vehicle’s built-in liquor cabinet only seems natural. 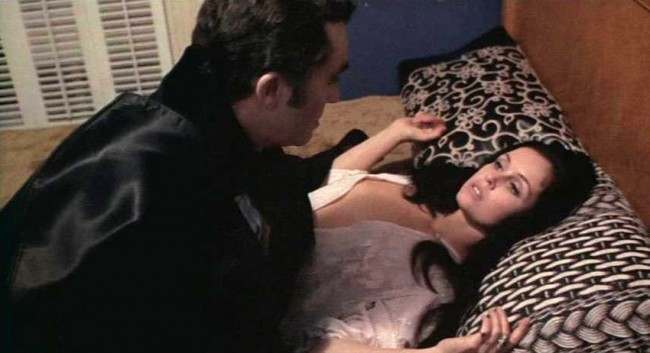 The ever-so-suave, Count Yorga, does what pre-Twilight vampires did best – sweet, sweet lovemaking to hypnotized females. As a result, the next day poor Erica starts behaving strangely…. And by “strangely” I mean eating a kitten.

The now infamous cat eating scene got this movie in trouble with the MPAA (shocker). They wanted to give it an X rating, whereas AIP (the production company) wanted it given a GP rating. Subsequently, much of the scene wound up on the cutting room floor, and wasn’t resurrected till many years later for DVD. 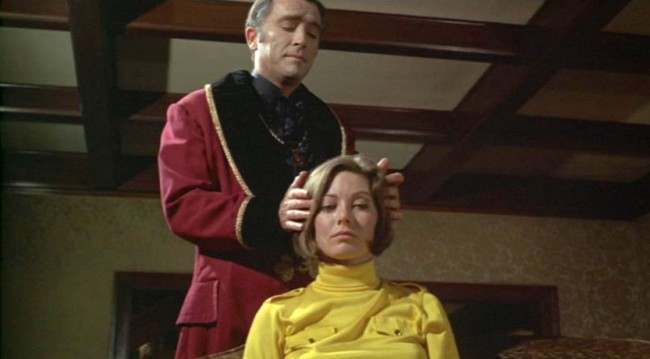 Of course, Count Yorga, Vampire is overflowing with strange moments. This wonderful quote from the actor who played Yorga, Robert Quarry, offers us an insight into the madness:

“…but it was hard work – we had just four crew members — that’s it. They were all happy on plum wine and grass!” 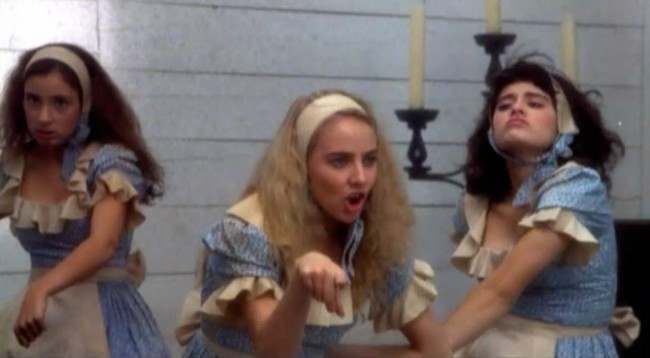 How do you single out a scene in a movie which features such historically insane moments as clam chowder wrestling and a dream sequence featuring a turkey turning into a topless woman? You may as well go with the scene involving three maidens possessed by Beelzebub who unexpectedly launch into an old-school rap (“Don’t Keep Satan Waitin’).

“Sunday school is a place for fools
It’s hot in hell, but the devil’s cool!”

Random /randəm/ (adjective): 1. Having no specific pattern, purpose, or objective, 2. Of or relating to the infamous cobra scene in The Mighty Peking Man.

In this King Kong rip-off, our hero, Johnny, meets a Jungle goddess named Samantha. Within minutes of getting to know each other, she is inexplicably bitten by a cobra on her inner thigh, to which Johnny must orally extract the venom.

The whole incident has become somewhat of a notorious scene in movie history. Perhaps it’s because it literally comes straight out of nowhere – an obviously cunning ploy by the director to put the Samantha and Johnny in a compromising position. Words simply cannot describe the bizarre nature of this scene.

And yet, things get significantly stranger. The Mighty Peking Man has the distinction of earning two spots on this list. In a scene that will forever haunt me, the giant gorilla watches Johnny and Samantha in the act….

You can’t unsee this. Once you watch this scene, it’s forever a part of you. No amount of therapy will rid you of it. This is your demon to wrestle with till the end of your days. 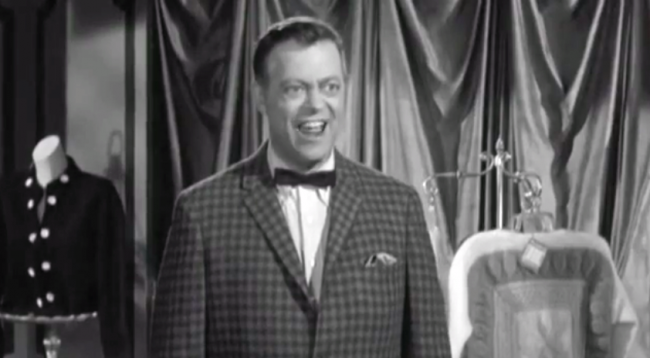 The ‘Cashmere Sweater’ scene featuring Tuesday Weld and Max Showalter has become a shining star in the annals of disturbing cinematic moments. Weld’s father comes to visit and is taken aback by his daughter’s “maturation.” As she tries on sweaters you can see the intensely perverted thoughts matriculating through his head as he growls, groans and shouts “OWWHEEE!” Meanwhile, Weld is in the dressing room in a state of orgiastic ecstasy. What in The Seven Hells is going on here?!?

This clip demands your attention: 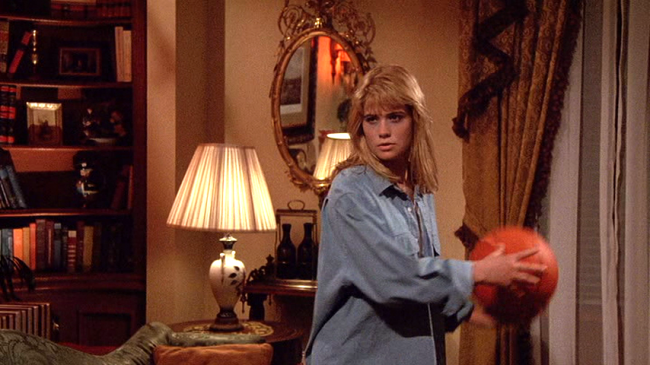 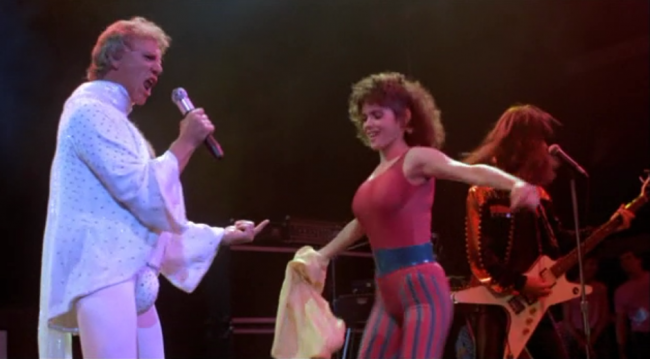 McDowell sports a codpiece bigger than the one he wore in A Clockwork Orange. As an added bonus, this codpiece houses a penis which actually talks to him. Indeed, it not only talks, but it talks sense. It convinces Malchie to turn his life around, and give up a life of drugs and philandering.

Suffice it to say, words cannot do it justice. It has to be seen. Malcolm has sworn that he was guilty of not reading the script all the way through before agreeing to the part. When it came to film his cock monologue, poor Malcolm was unpleasantly surprised at what he had gotten himself into.