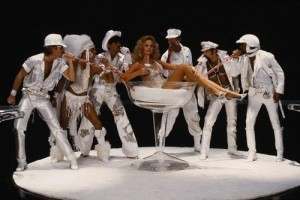 Based on the New York article “Tribal Rites of the New Saturday Night,” the movie depicted the story of blue-collar Brooklyn-native Tony Manero (John Travolta), “the king” — or perhaps God — of disco. Audiences thrilled to Manero’s attempt with his dance partner (Karen Lynn Gorney) to win a dance contest at the local disco, a victory that made Manero set his eyes beyond the lights of Brooklyn, on something bigger.

Scored wall-to-wall with Bee-Gees tunes like “Stayin’ Alive,” Saturday Night Fever was an authentic phenomenon that made Travolta a movie star and sold more than twenty-million copies of the film’s soundtrack.

As one might expect, the success of Saturday Night Fever also meant that Hollywood was soon attempting to cash in on a new trend. Before long, a whole cycle of disco movies was in the offing. Unfortunately, most of the ensuing efforts proved dreadful, and the disco fad died a brutal death at the box office. 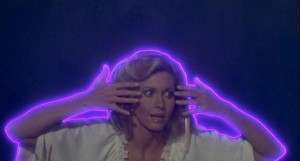 Here then, for your consideration, are five of the movie musicals that hammered the final nails in disco’s coffin. These movie musicals– all of 1978 -1983 vintage — remain to this day among the most bizarre, garish, and lurid films ever produced.

This film stars the Bee Gees and Peter Frampton, and the music is composed entirely of songs from the Beatles’ catalog. The film’s story concerns the evil Mr. Mustard (Frankie Howerd), who schemes to steal the magical coronet, drums and other musical instruments of the original Sgt. Pepper (Billy Preston): the revered former leader of Heartland U.S.A.

Meanwhile, the Bee-Gees — as the Lonely Hearts Club Band — must retrieve the instruments, and contend with such evil personalities as Father Sun (Alice Cooper) and Future Villain (Aerosmith).

Save for Aerosmith’s rousing rendition of “Come Together,” all the musical numbers in the film are terrible, but none worse or more bizarre than “Get Back.” In this number, Frampton’s Billy believes his girlfriend, Strawberry Fields, is dead, and attempts suicide, only to be resurrected by a God-like Sgt. Pepper, who can shoot laser beams out of his fingers and also, apparently reverse time (or at least run film backwards).

Below, the film’s trailer:

Written and directed by Menahem Golan, The Apple is the story of Bibi (Catherine Mary Stewart) and Alphie (George Gilmour), two rubes from Moosejaw who are contestants in the 1994 edition of the popular live-TV show program World Vision Song Contest (the American Idol of its day, apparently).  These talented singers are soon courted and tempted by the most evil agent in the world, Mr. Boogalow (Vladek Sheybal), who also happens to be the Devil.

The kids escape the Devil’s clutches and with a clutch of aging hippies await the return of the magical Mr. Topps (Joss Ackland) — a figure representing Jesus, perhaps — who obligingly descends from the Heavens to save mankind in what can only be described as a disco rapture.

The craziest musical number of all is called “The Apple,” wherein Bibi makes her regrettable Faustian deal with Boogalow. The song lyrics note that “You’ll be hypnotized. You’ll be victimized.”

Consider that fair warning, because the words describes perfectly how you’ll feel watching this psychedelic train-wreck of a movie.

This Village People bio-pic was advertised with tremendous hoopla, and even termed “the musical extravaganza that starts the 1980s.”  But be warned, another tag-line threatens that once you “begin,” “you can’t stop the music.”  In other words, don’t even start the movie.  You’ll regret watching it almost instantly.

Can’t Stop the Music not only stars The Village People, but Steve Gutenberg and Bruce Jenner in short-shorts. And many of the musical numbers are highly suggestive too, including one set in the YMCA locker room, and the infamous “The Milk Shake.”

The year 1980 was a hell of a time for disco movies. In fairness — and in comparison to The Apple of Can’t Stop the Music — Xanadu is far better than the other films on this list. It might even be considered a guilty pleasure. The film stars Olivia Newton John as a muse who helps a guy named Sonny Malone (Michael Beck) achieve his artistic dream of…opening a disco night-club. The great Gene Kelly is on-hand too as the muse’s former ward and much of the soundtrack is from ELO.  Only here the “electric” in Electric Light Orchestra means that some songs seem to have apparently been vocalized by the Cylons from Glen Larson’s Battlestar Galactica (1978).

Xanadu’s tag-line asks you to “open your eyes and hear the magic!” — which doesn’t quite make sense.  However, one sight probably every musical fan wishes to close his eyes over is that of the illustrious and dignified Kelly dashing about on roller skates…outpacing women dancers in tight spandex outfits.

The Apple was apparently just a warm up in terms of disco movie Hell. Here John Travolta returns in his (then) most famous role, this time jockeying for a part in a Broadway show called “Satan’s Alley.”  That number is cheesy as hell, as is the entire film.

Critic David Denby wrote one my favorite movie reviews of all time regarding this film. “This is no ordinary terrible movie; it’s a vision of the end.” He wrote. “Not the end of the world, which will probably be much quieter than Staying Alive, but the end of movies…As you watch it, the idea of what a movie is — an idea that has lasted more than half-a-century — crumbles before your eyes.”

And as Staying Alive crumbled before our eyes (in Satan’s Alley, no less), so did the whole era of disco movies.