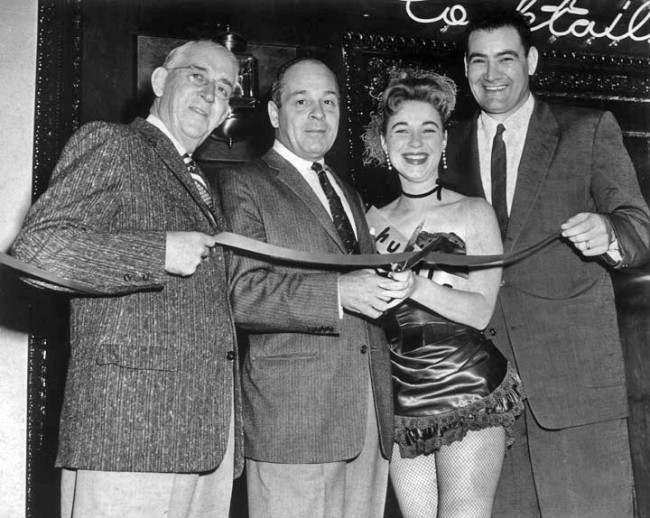 WE humans like to inaugurate new things with ceremony and tradition.  If it’s a new boat, we christen it with a bottle of champagne. A golden spike is laid for a new railroad.  Opening a new business means there’s a ribbon to be cut, and a new building means there’s need for a golden shovel to “turn the first sod”.

But around the mid-century mark, a new tradition of inauguration emerged that overshadowed them all – The Ceremonial Babe.  No groundbreaking or grand opening was complete without a smoking hot lady doing the honors.  It was primarily an American thing, and it quickly fell out of favor once Women’s Lib took hold.  But for that brief window in time and space, the Ceremonial Babe was an integral part of the grand tradition. 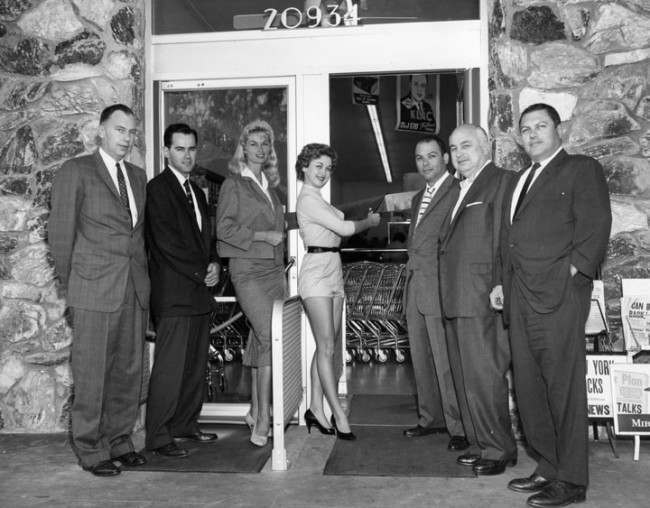 One pattern you’ll quickly notice in these old photographs is that the Ceremonial Babe is always surrounded by a troupe of creepy men.  Generally, they look the type to “make you an offer you can’t refuse.” 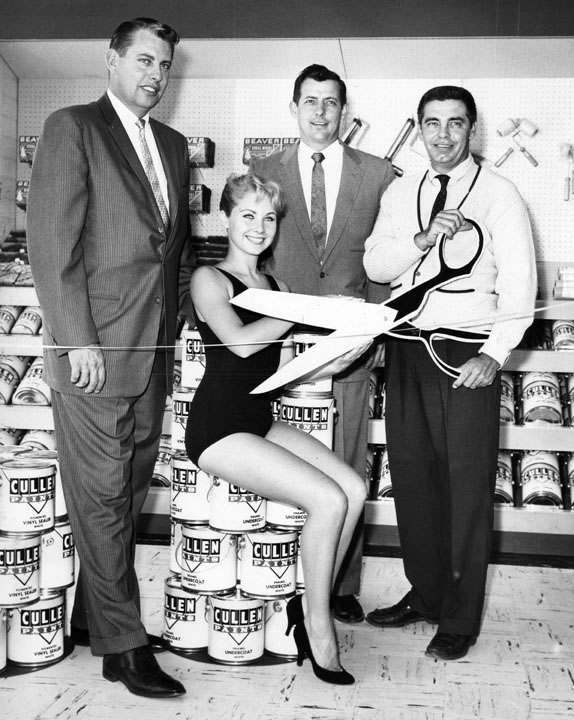 Don’t think for a minute that it was just big hospitals and factories that got the Ribbon Cutting Mamas in-house.  Even the humble paint store (obviously operated by three warring mob bosses) would have these women do the honors.  It was an act of necessity – no stone cold fox meant bad luck for the business! 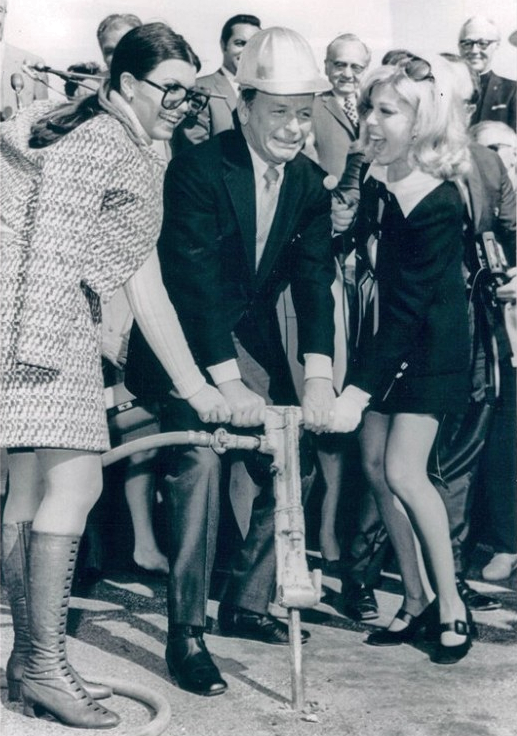 Was there something sexual about this whole business?  Nah.  What would make you think such a thing? 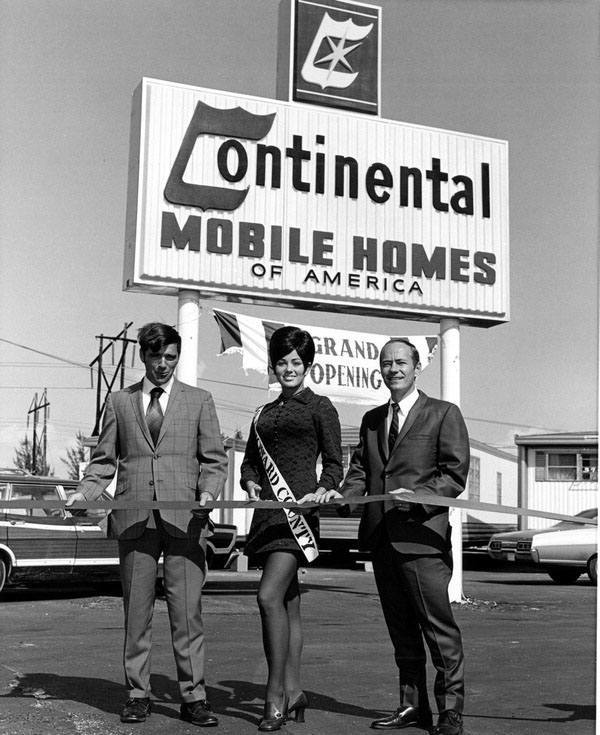 Do a Google image search for “grand opening ribbon cutting” and you’ll get plenty of similar photographs:  new business owners and staff awkwardly smiling for the ceremonial cut.  However, what you won’t find is the Ceremonial Babe.  I suppose it’s sexist to parade women around like trophies – perhaps it’s demeaning.  However, they sure did seem happy. 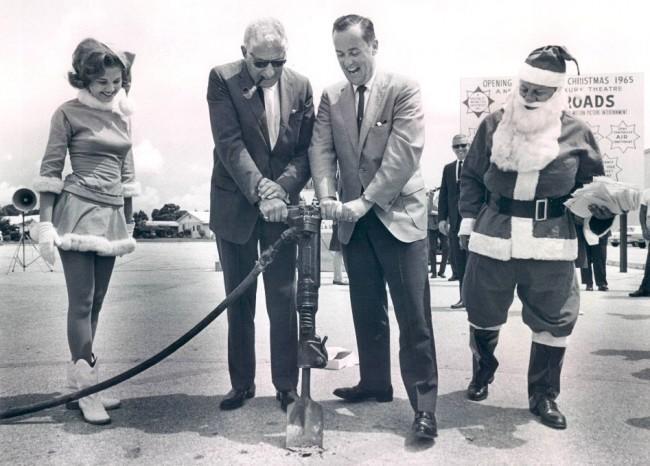 Little known fact: Sometimes Santa would pimp out his “Helpers” for various ceremonies in return for “favors”.  It was a dirty racket, but making toys ain’t free, and St. Nick has bills to pay. 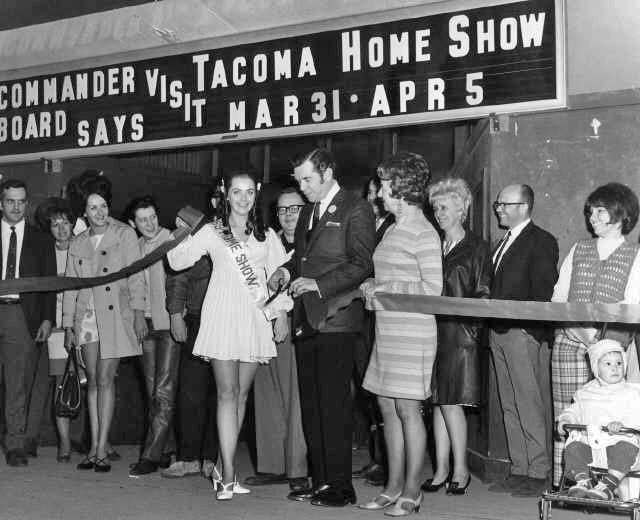 Just who were these mysterious Ceremonial Babes?  Usually, they were local beauty pageant winners. Now that these inaugurations no longer invite Miss Magnolia State, Miss Pierce County or Miss Wilcox Agricultural Fair, one wonders if the luster and flair has gone out of winning these hometown pageants. 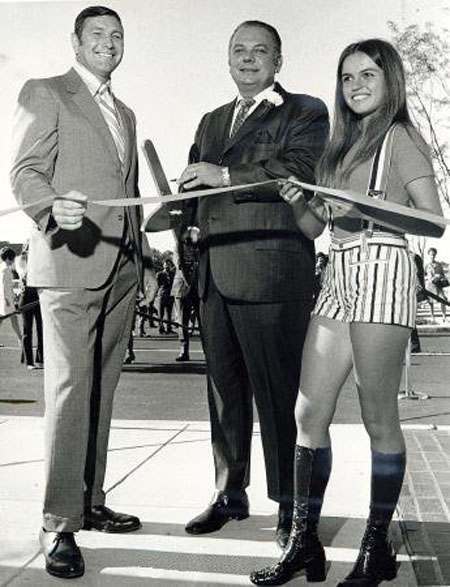 Hot pants or miniskirt required.  We can’t have the Ceremonial Babe showing up looking like a professional businesswoman, can we? The scandal! 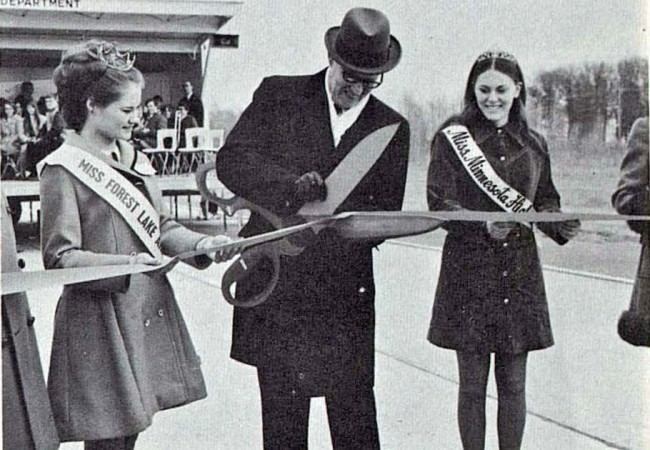 Were any Ceremonial Babes harmed or disfigured by these Goliath blades?   And how do you go about buying a giant pair of scissors in the first place?  So many questions. 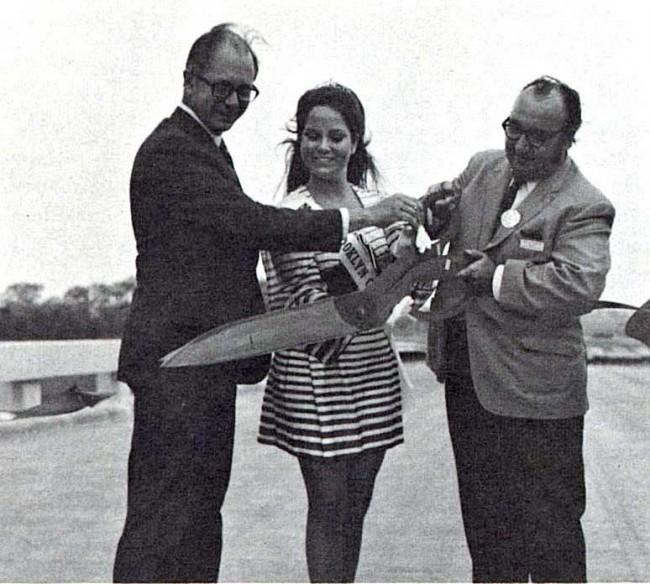 Business man: “How’s about after this ribbon cutting you and me go cut a ribbon of our own?”
Ceremonial Babe: (Awkward giggle)

One also wonders how often these Ceremonial Babes were the victims of unwanted flirtation by the new business owners.  The scenario of a beautiful young ribbon cutter surrounded by lecherous old businessmen just screams Mad Men. 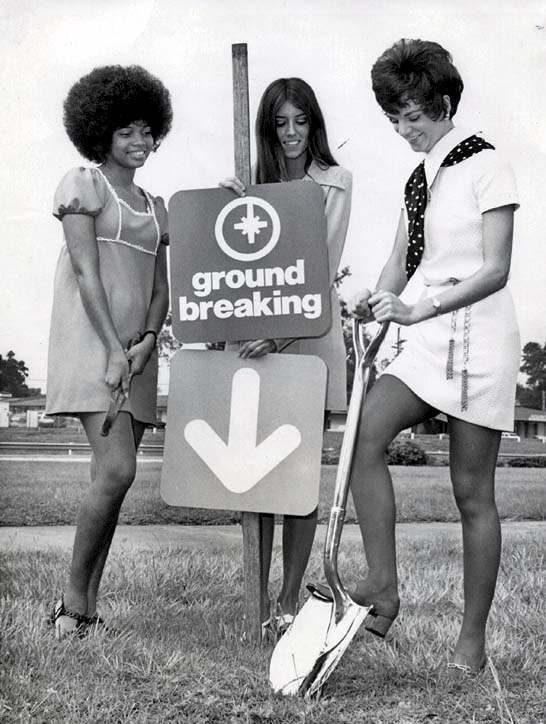 At last, we come to an inauguration without a cluster of older gentlemen in suits. No doubt they are off camera whistling and making crude remarks. 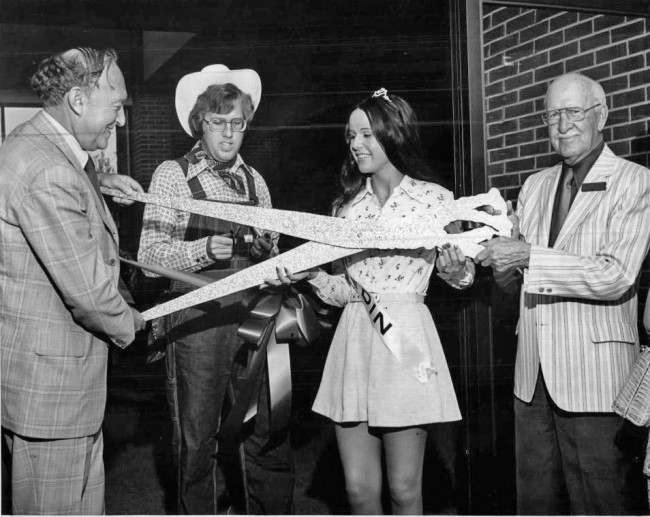 While the lovely Ceremonial Babe was a fixture at inaugurations far and wide, the Retarded Cowboy was rarely used.  The man on the right feels this was a huge mistake. 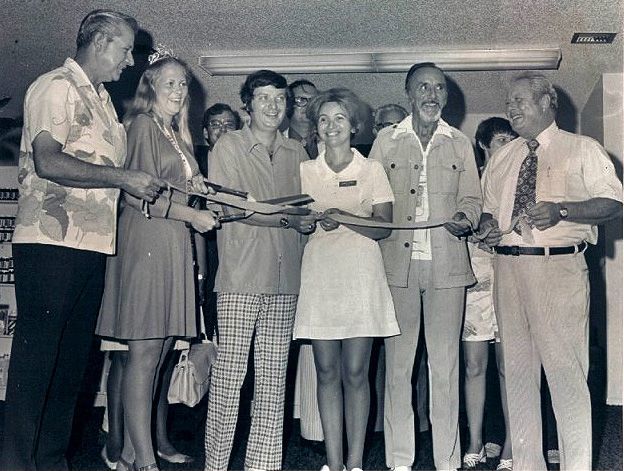 There’s nothing more American than a ribbon cutting ceremony.  Starting a business is the American Dream, and this tradition is the very symbol of that event.  How sad that so many of these small businesses would become swallowed up and spit out in the ensuing decades.  One wonders how many of the business owners in these pictures with happy smiling faces full of optimism, would find themselves in the shadow of Wal-Mart in the years to come. 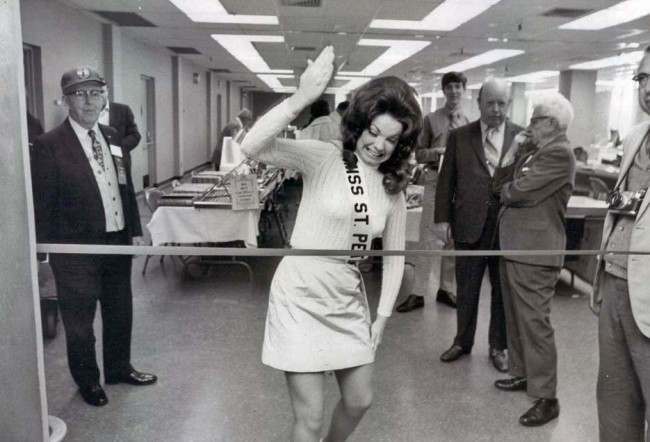 Let it be known, Ceremonial Babes were highly skilled in the ribbon cutting arts.  If a gargantuan pair of scissors was unavailable, these ladies were not above Kung Fu. 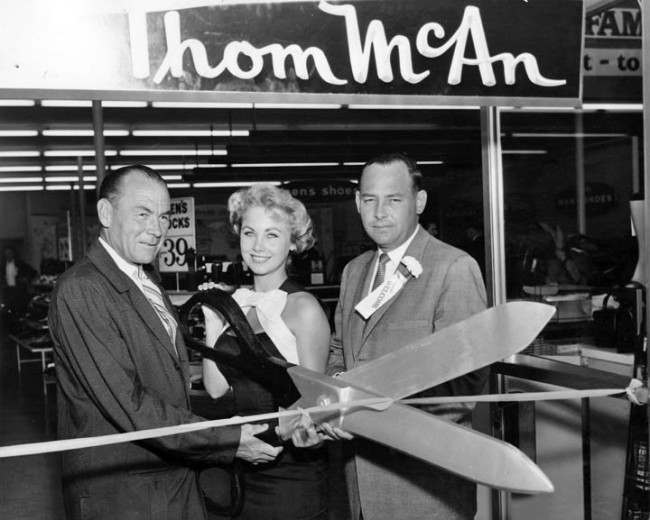 It seems a bit of a shame the Ceremonial Babes are nearly extinct.  Sure, nothing said “gender inequality” more than a pretty woman in a short skirt surrounded by grinning businessmen.  But how different was it than using models to sell magazines, cars, after-shave, etc. which is ubiquitous to this day?