BBC Radio DJs Noel Edmonds and John Peel feature in this 10 September 1983 clip from The Late, Late Breakfast Show. Edmonds is vying for control of the Beeb, so we can expect lots more of this kind of telly if he gets his hands on it. 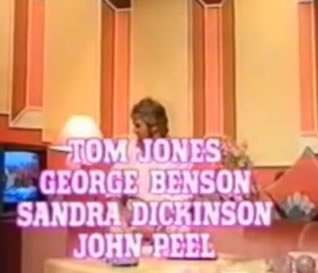 Key moments to look out for:

Note:  Richard Smith fractured his pelvis and injured his head, neck and back. He wasn’t the only one. Also in 1983, Barbara Sleeman broke her shoulder after being fired from a cannon; she would later say “The BBC don’t give a damn. They just want the viewers.”

On 13 November 1986, self-employed hod carrier Michael Lush was killed during his first rehearsal for another live stunt. The stunt, called “Hang ’em High”, involved bungee jumping from an exploding box suspended from a 120 ft-high crane. The carabiner clip attaching his bungee rope to the crane sprang loose from its eyebolt during the jump. He died instantly of multiple injuries, and the Breakfast Show was cancelled on 15 November after Edmonds resigned, saying he did not “have the heart to carry on”.