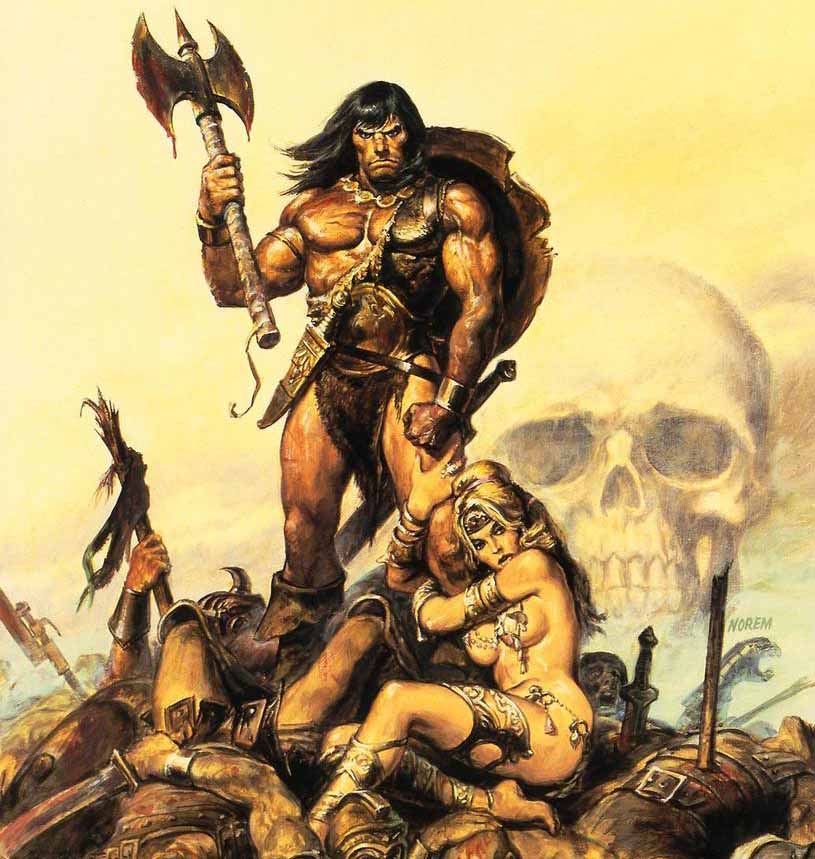 What image could be more ubiquitous in science fiction and fantasy art than the mighty well-armed He-Man with damsel at his feet?  I call it the “Conan Pose” after the most well-known and biggest repeat offender of the trope.

The device is as simple as this: (1) the man is a rugged warrior who is generally armed and (2) the woman is positioned beneath him and is generally defenseless.   Like the Women Running from Houses theme, which you see again and again in gothic romance, the “Conan Pose” is repeated ad nauseum in the science fiction and fantasy world and beyond.  Let’s have a look at a sampling… 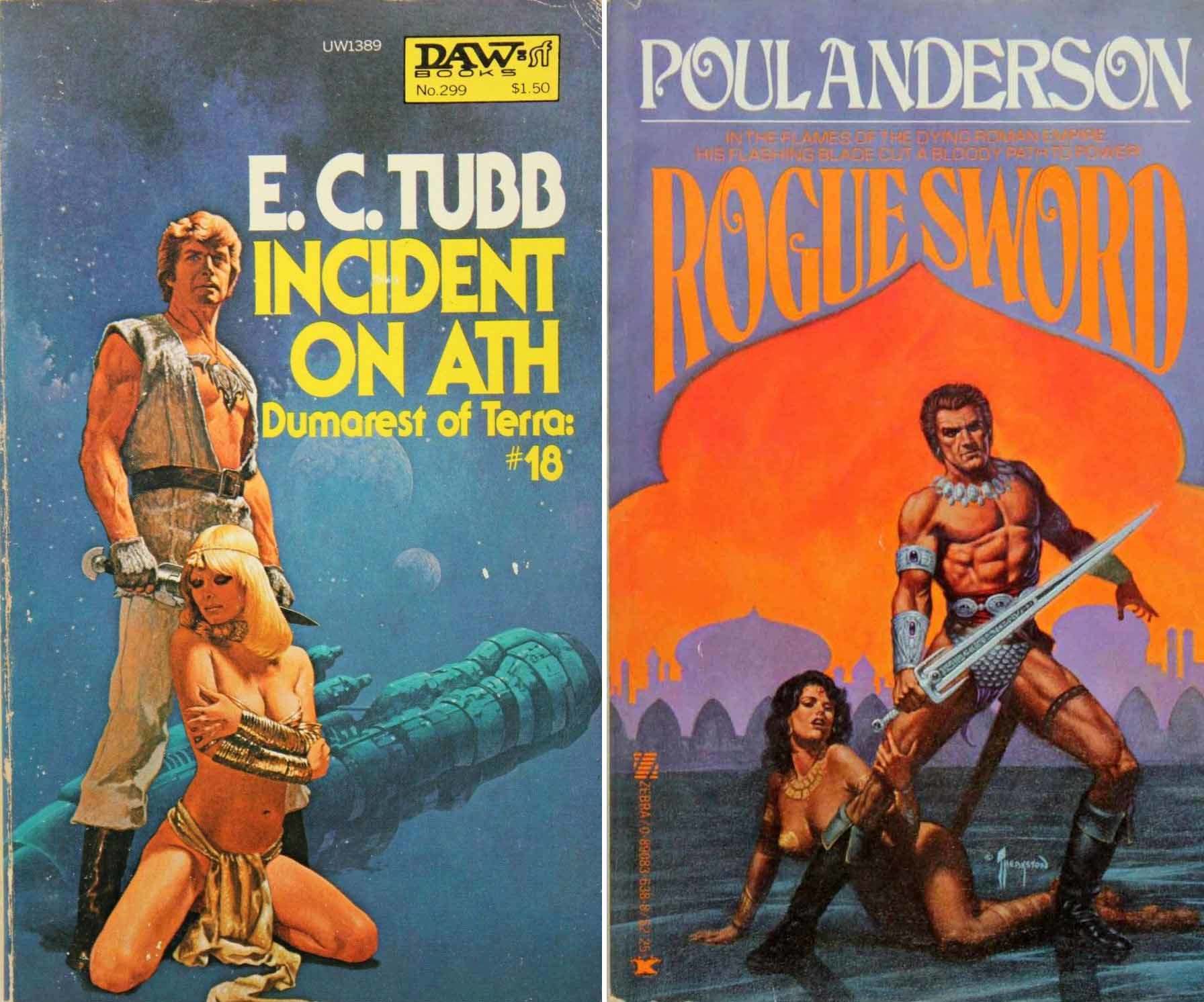 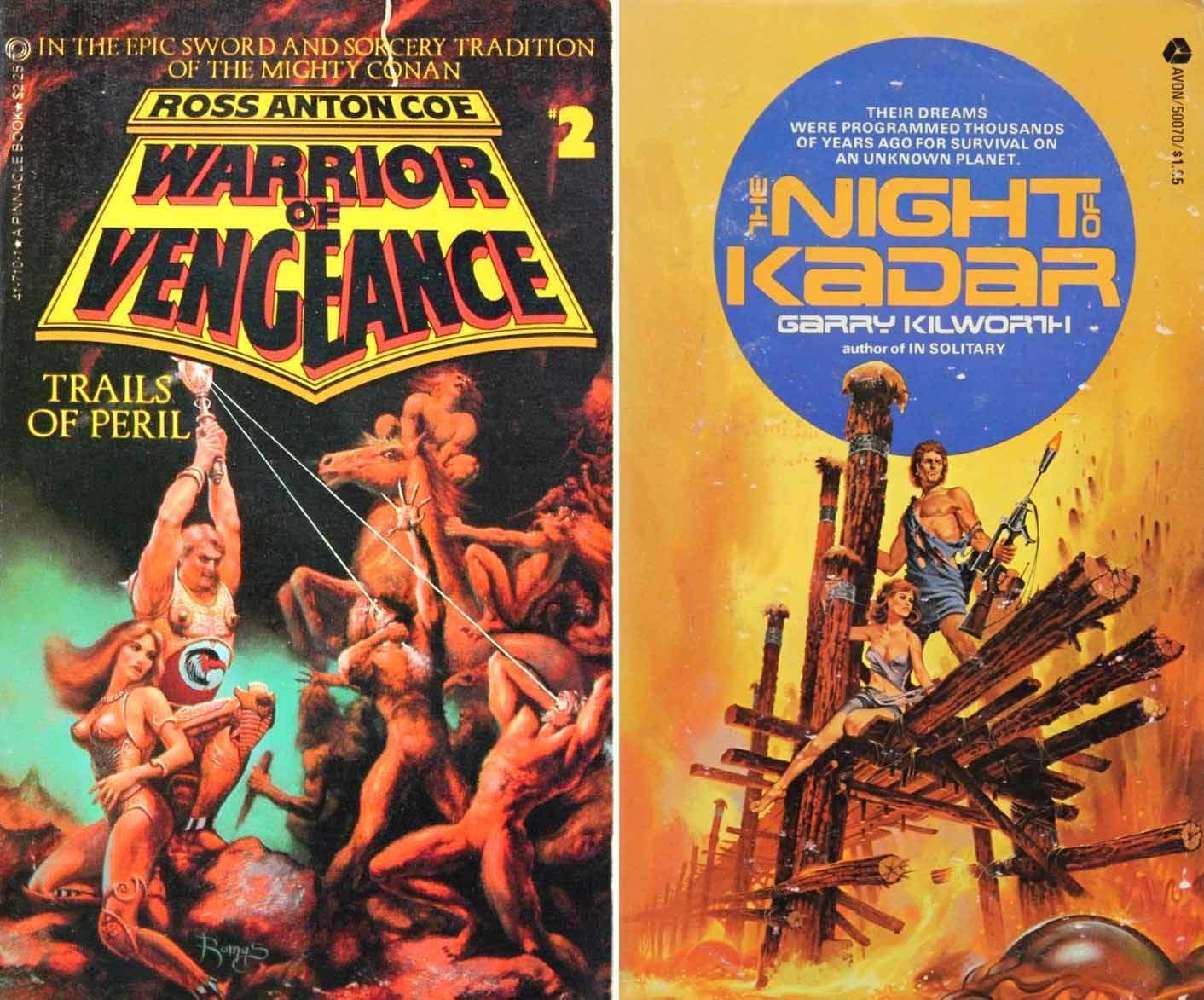 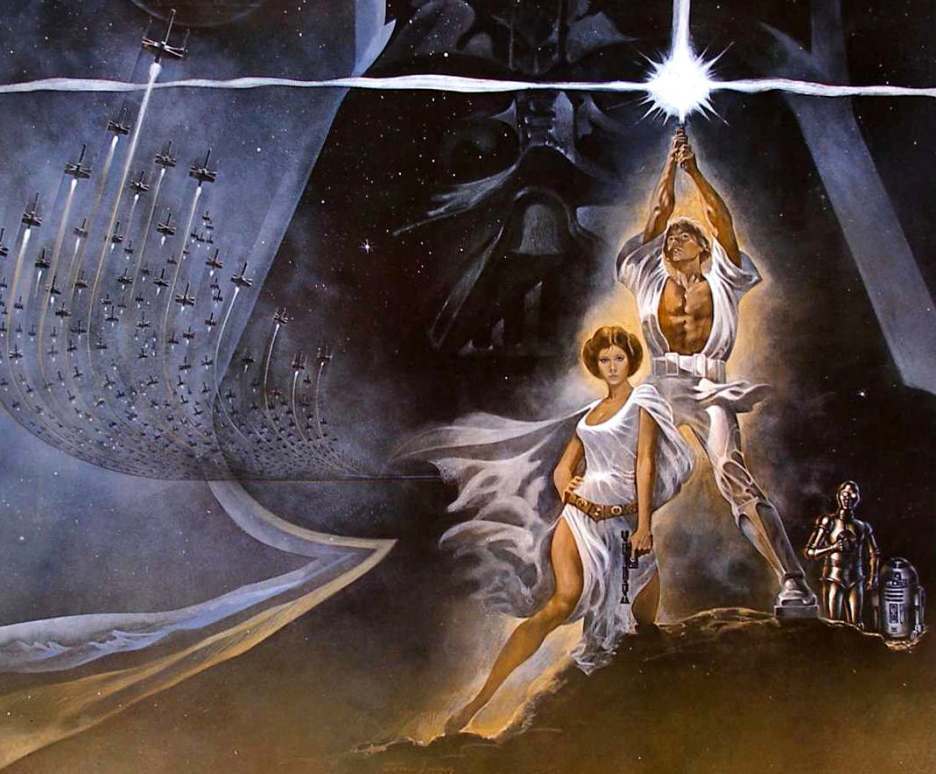 The poster art for Star Wars featured perhaps the most recognizable example of this trope: Granted, Leia is hardly helpless.  Yet, she is positioned below him, and there can be no denying who’s the knight and who’s the maiden.

You might say the Star Wars Pose is an “upgrade” from the oft unarmed, defenseless maidens from paperback art from decades past. 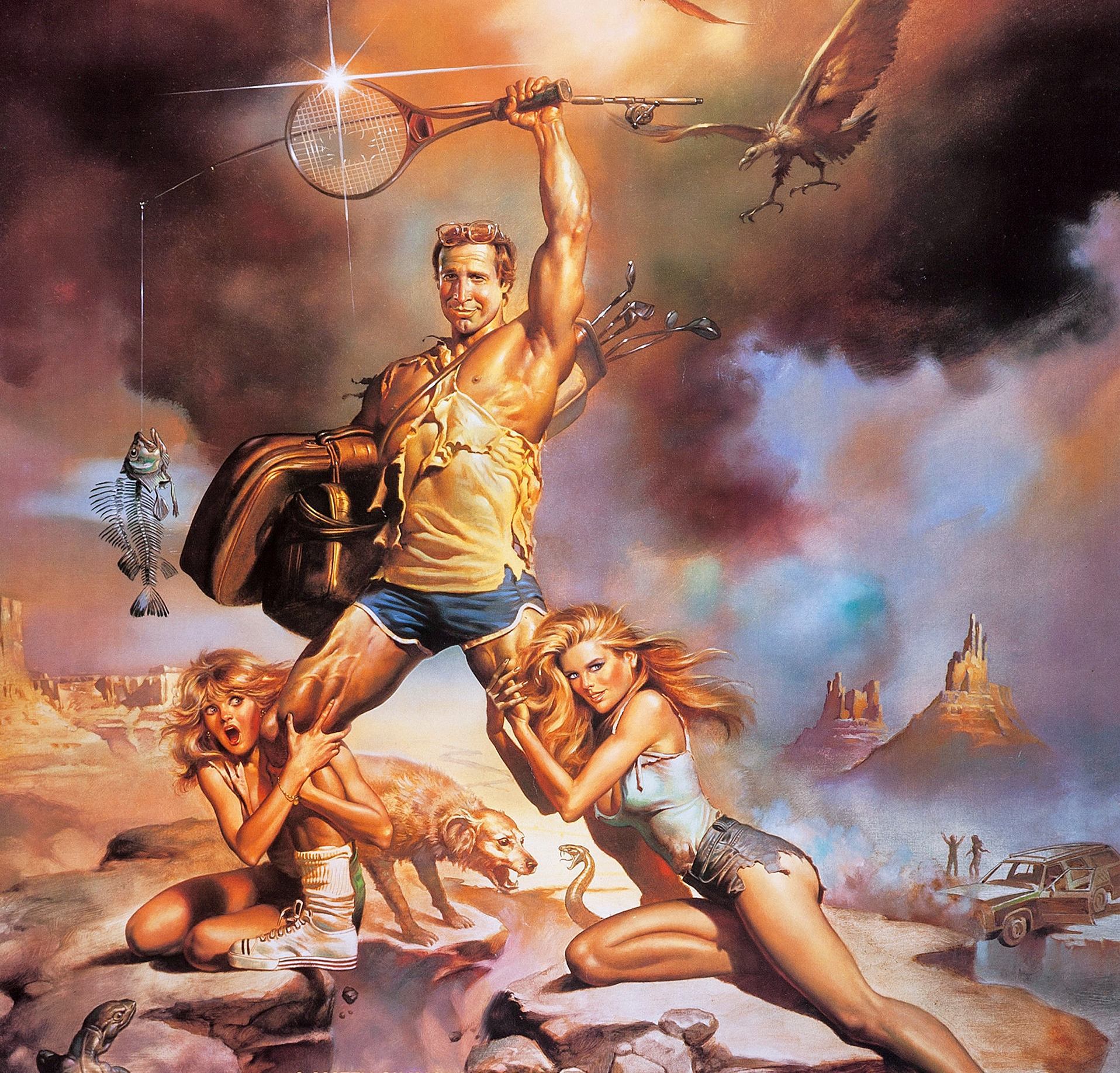 My favorite example is the National Lampoon’s Vacation movie poster, where the Conan Pose is spoofed. 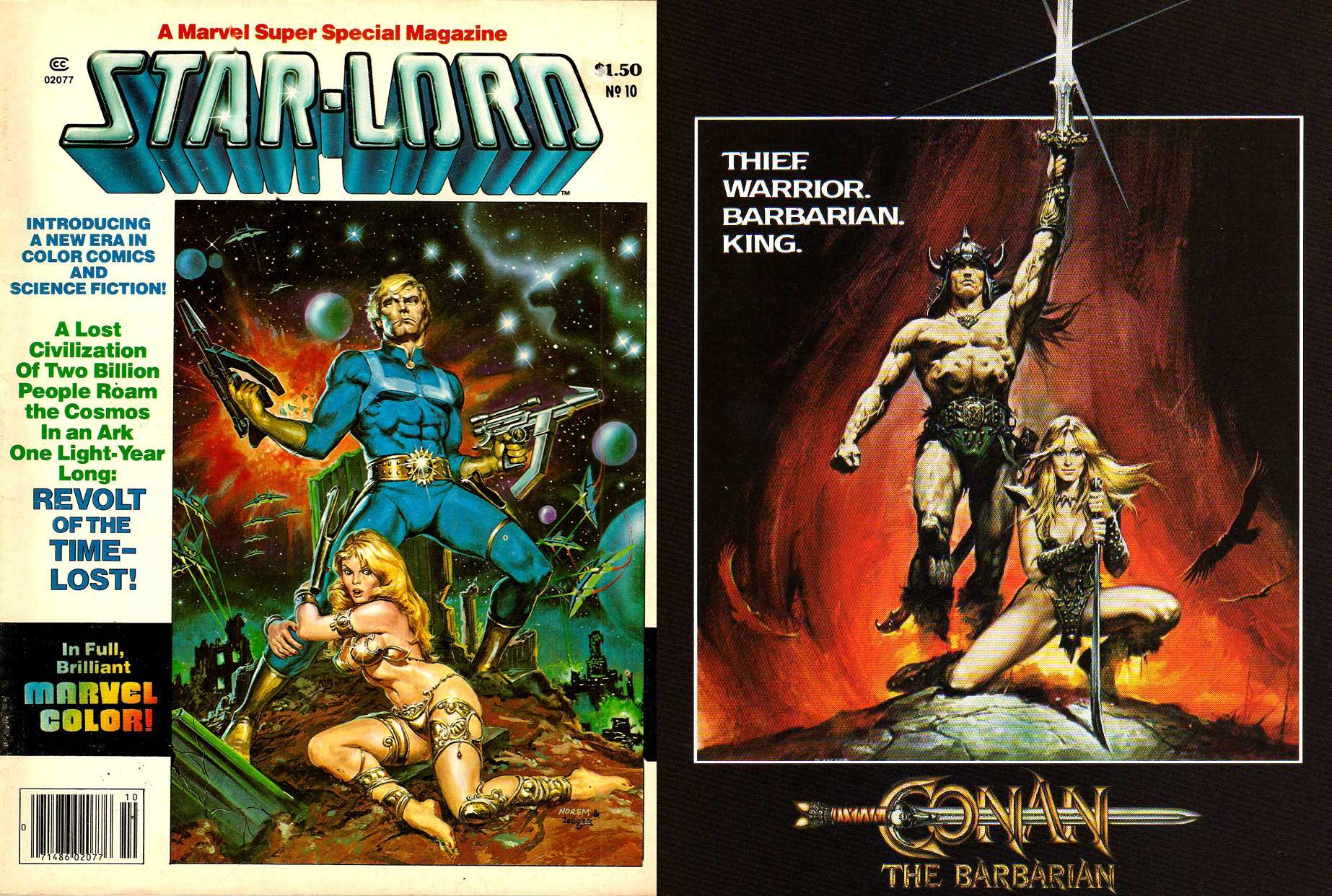 Some of you may not be happy with the term “Conan Pose” and prefer to call it the “Star Wars Pose” or the “Frazetta Pose”… call it what you will.  Whatever the label, this artful conception was copied and recopied to a startling degree. 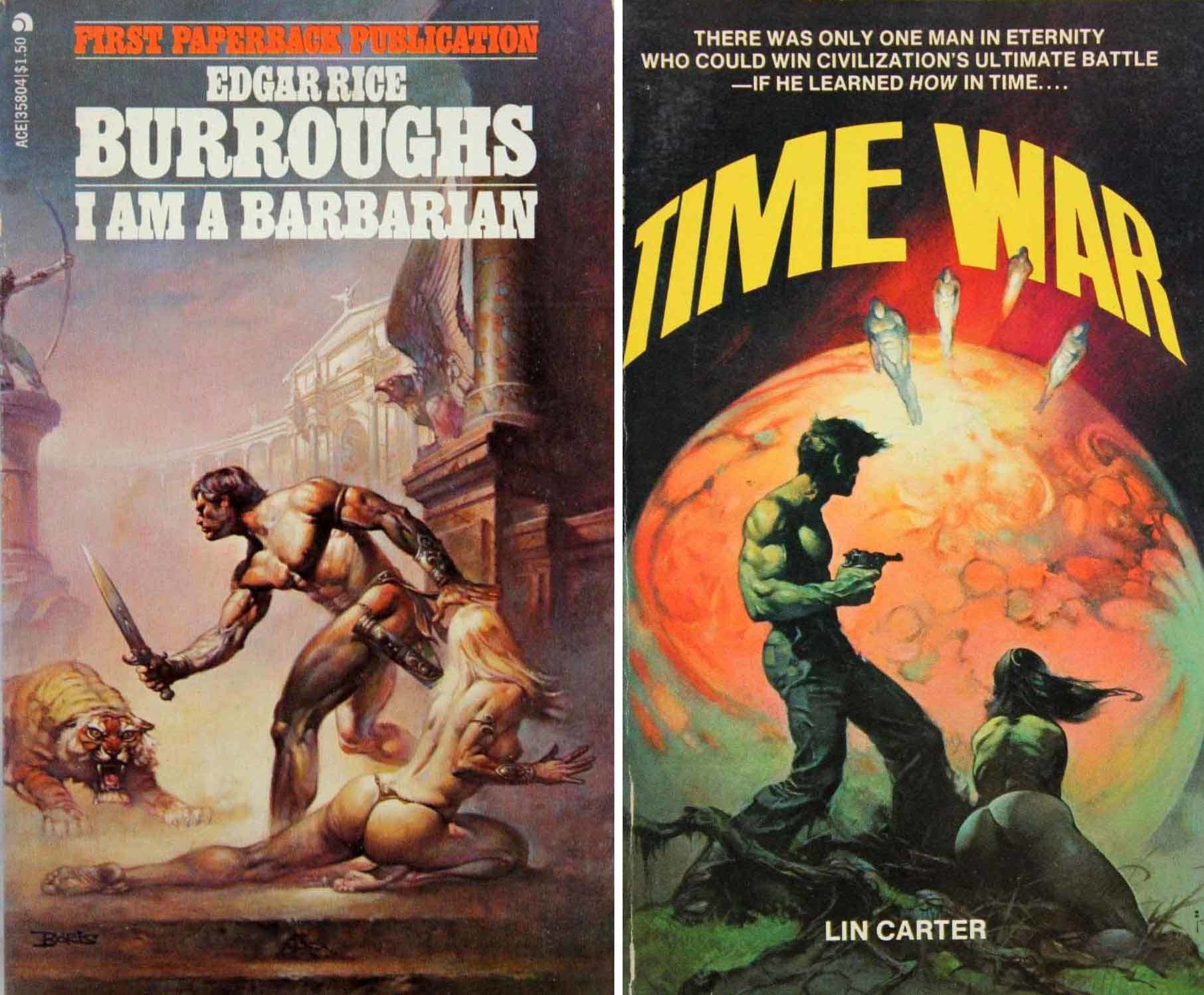 Often, the damsel beneath the “Conan” is endowed with generous attributes 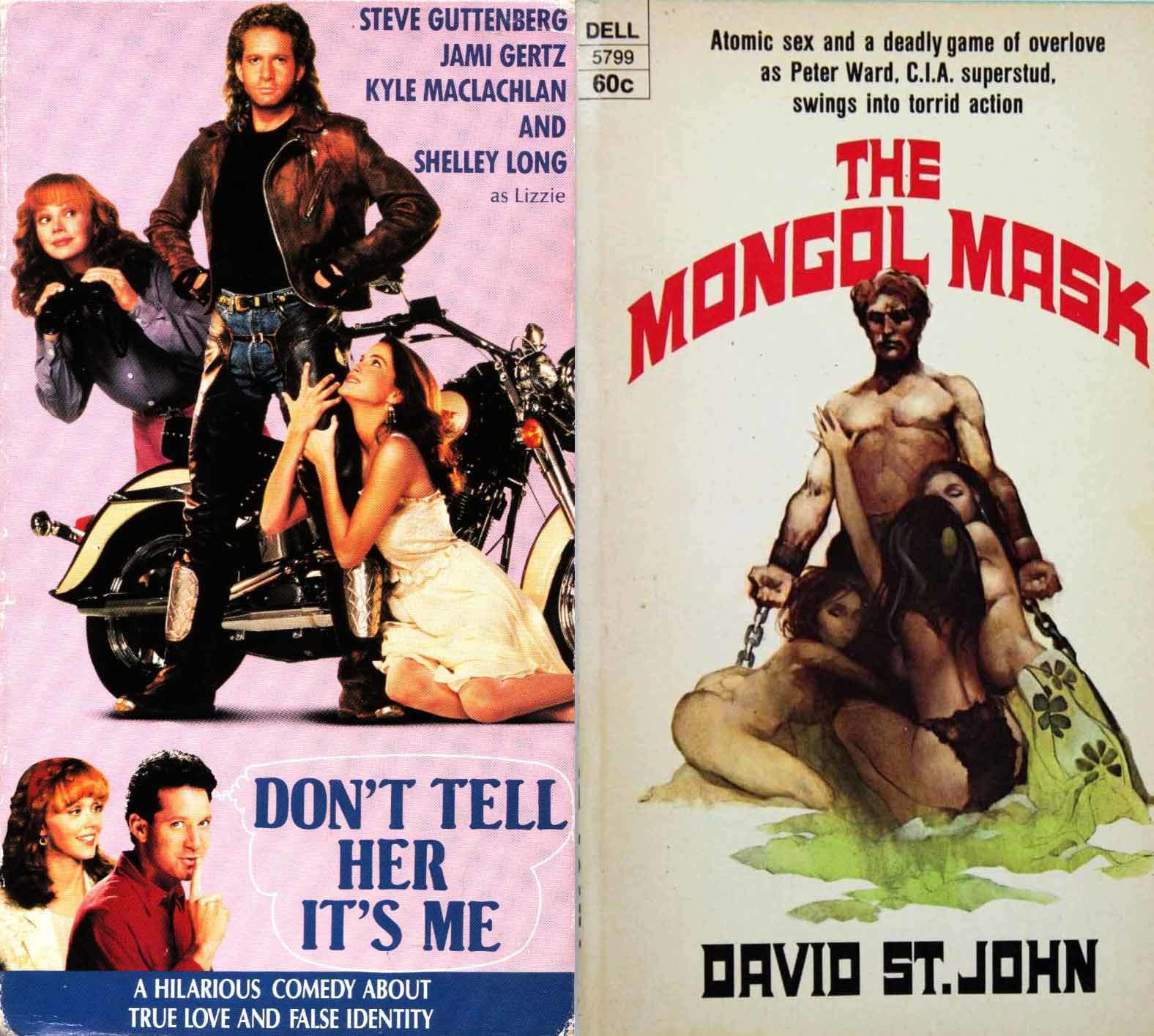 As you can see from the stupid Steve Guttenberg  VHS cover, the pose isn’t limited to science fiction and fantasy.  Indeed, anytime there’s a need to show a masculine alpha male, the trope is employed. 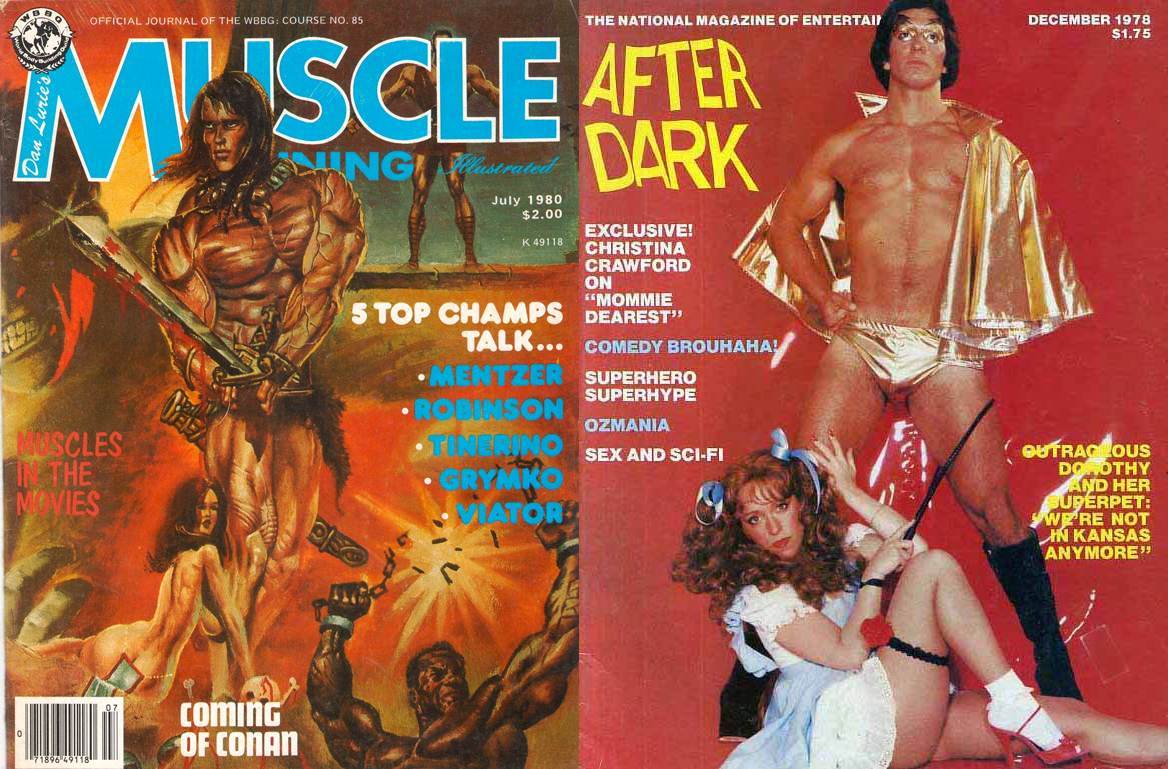 Once you recognize the theme, you’ll start noticing the Conan Pose everywhere – whether it’s a muscle magazine or a gay 70s periodical….. it was omnipresent in decades past. 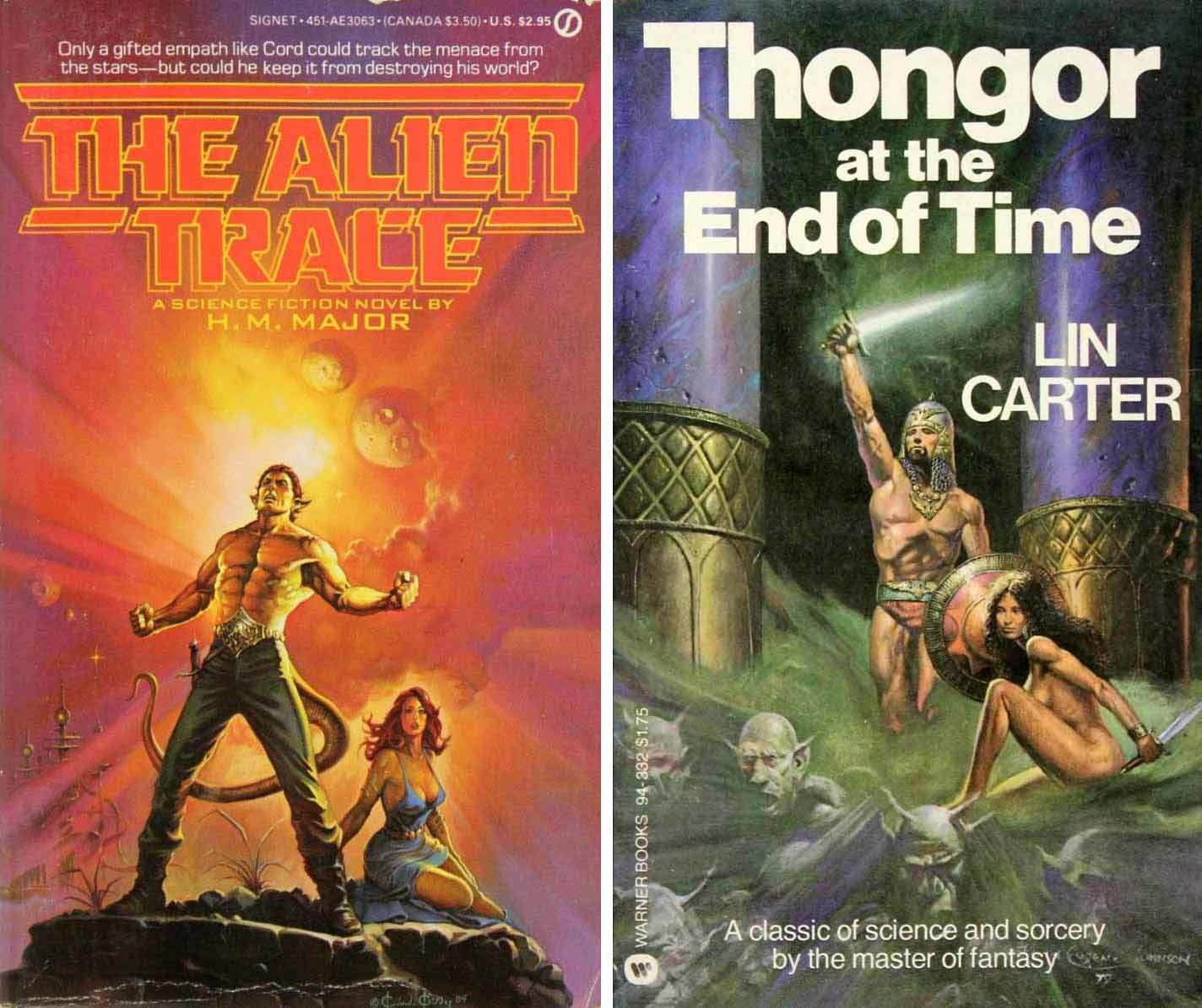 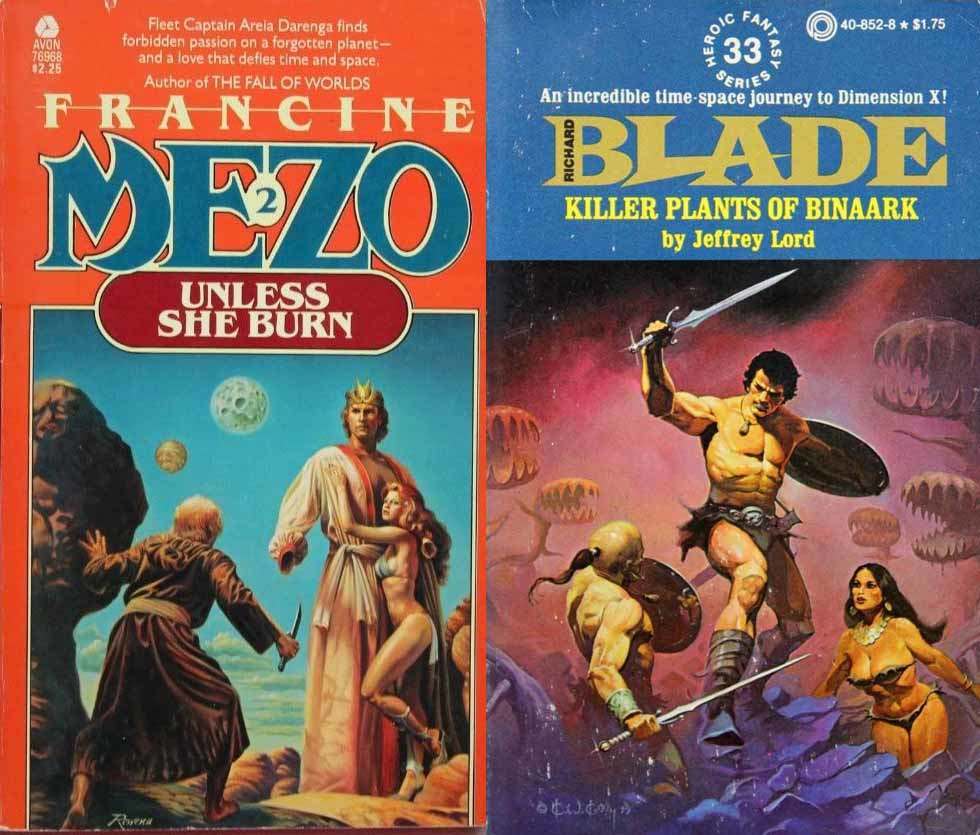 These two covers illustrate that the woman can even be standing completely upright;  yet, the man must still tower over her.

A couple album covers with the Conan Pose.  No weaponry to be found on the Bruce Bond LP, but he’s no less in control. 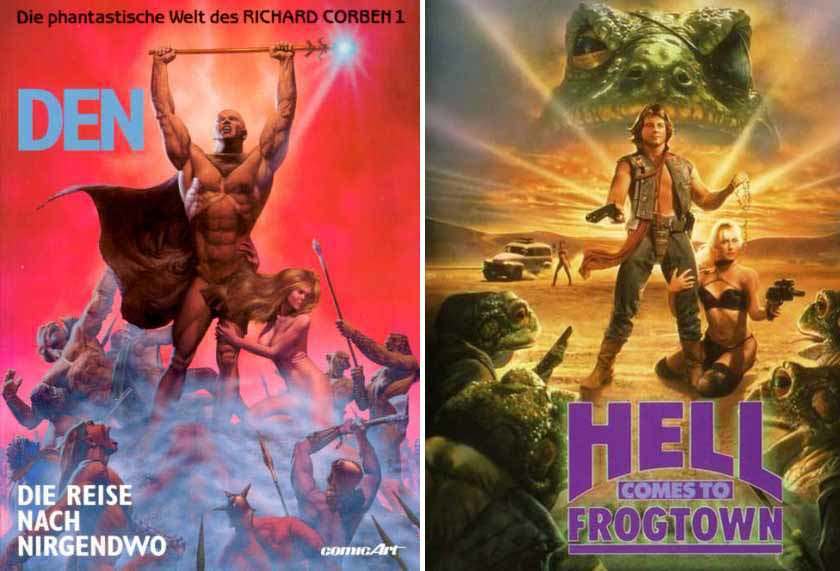 Naturally, when you have such a Xeroxed theme, you’re bound to wind up with illustrations that are strikingly similar. 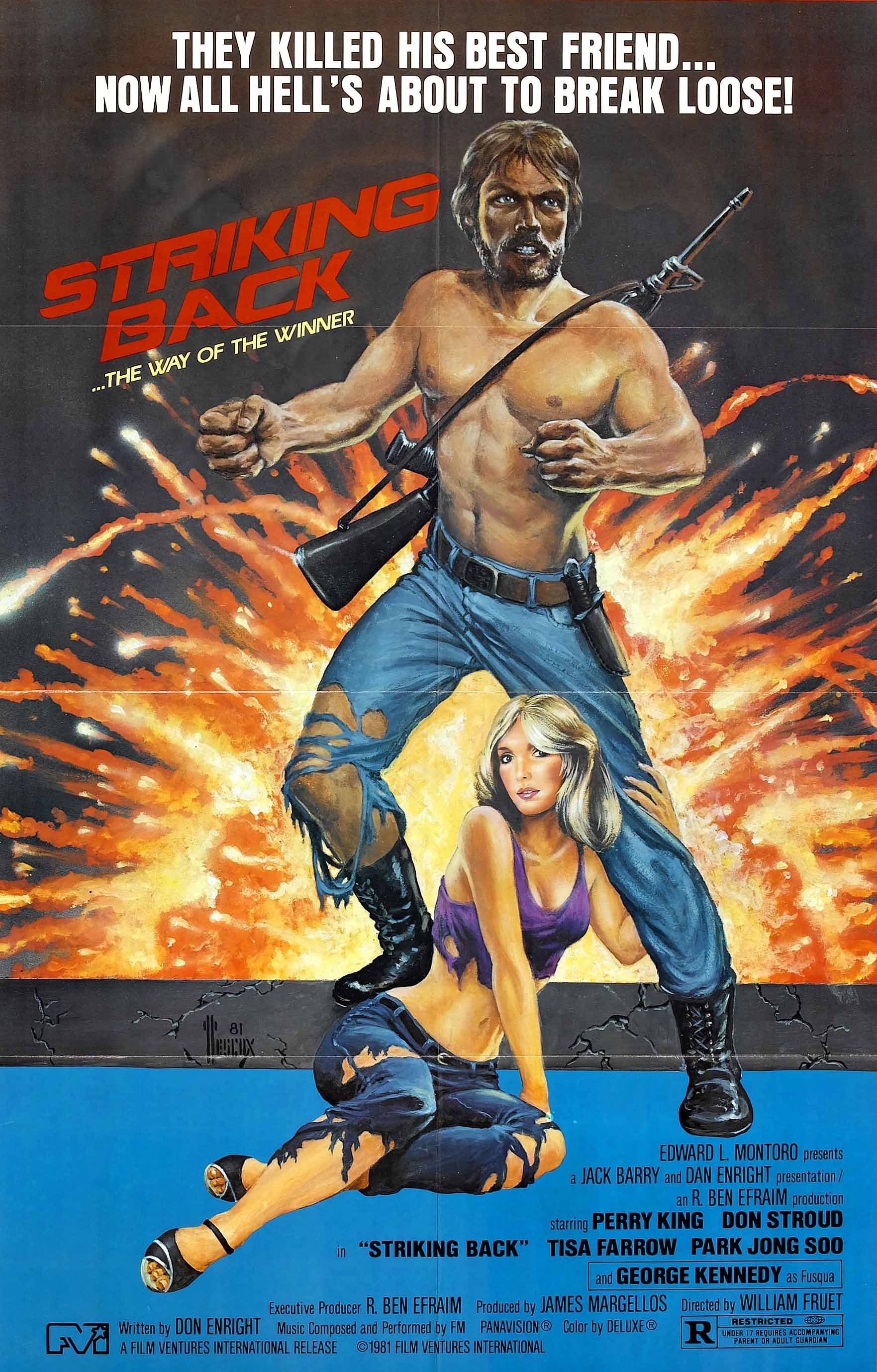 We could easily provide you with a thousand more examples, the trope is so plentiful.   Alas, we are confined by the medium – you’ll have to wait for the coffee table book for a comprehensive supply. 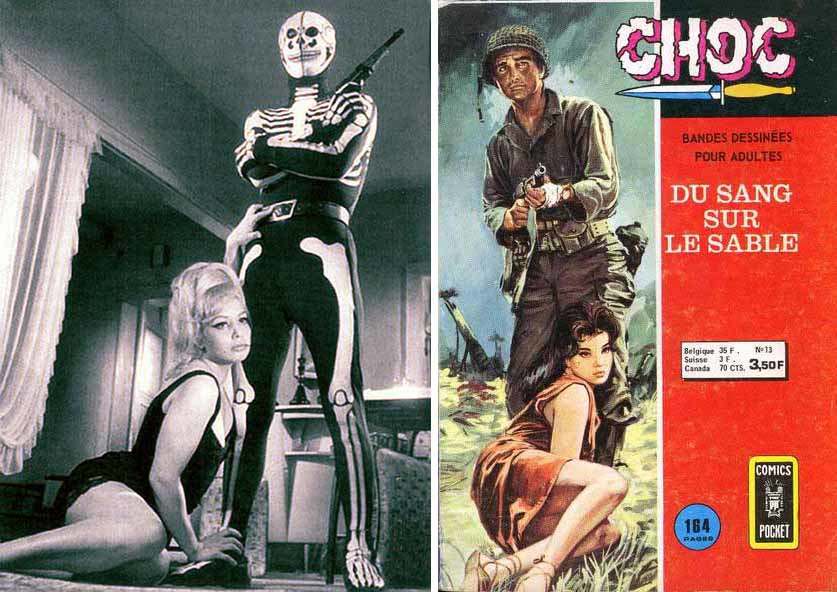 Whether it’s a masked hero or G.I. Joe, chances are he’ll be brandishing a weapon with a groovy chick attached to his leg. 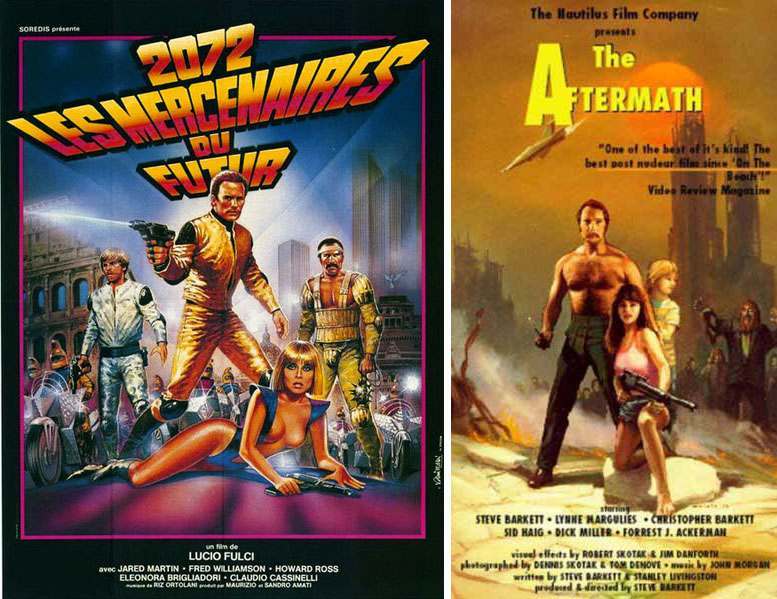 Like Princess Leia, both these ladies are armed… and like Leia, they are strategically positioned beneath the male hero. 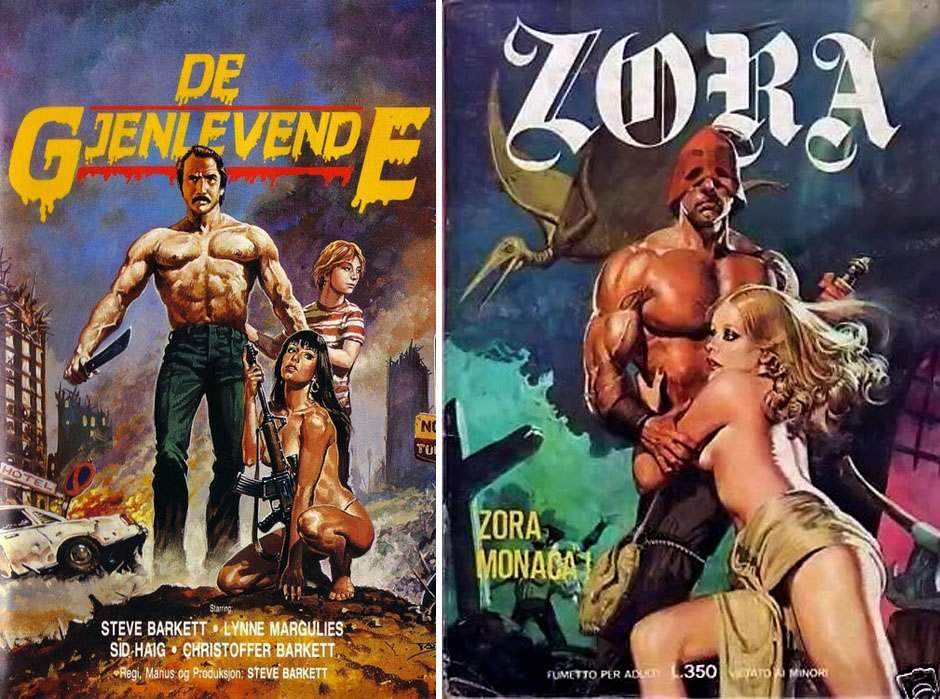 If the male hero is going to be shirtless, then, by God, so is the female.  The Conan Pose was all about equality. 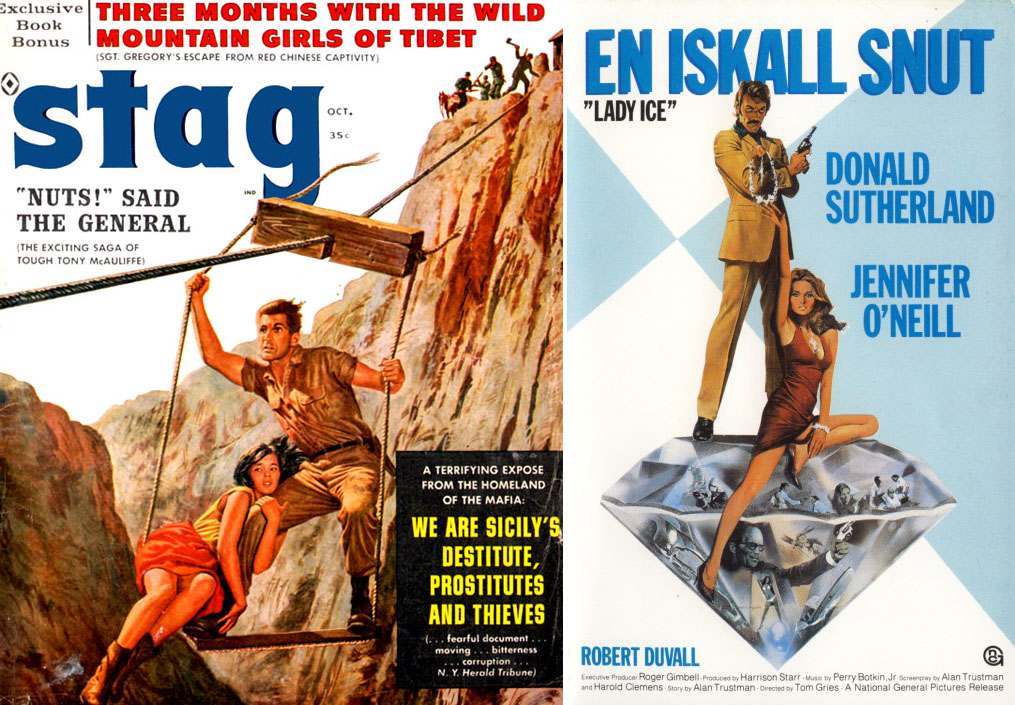 You would think the Conan Pose would be everywhere in old pulp magazines, a medium rich with brave heros and helpless damsels.  However, you don’t start seeing it with any regularity until Frazetta started putting it on paperbacks…. then, it was only a matter of time before it landed on Donald Sutherland VHS covers. 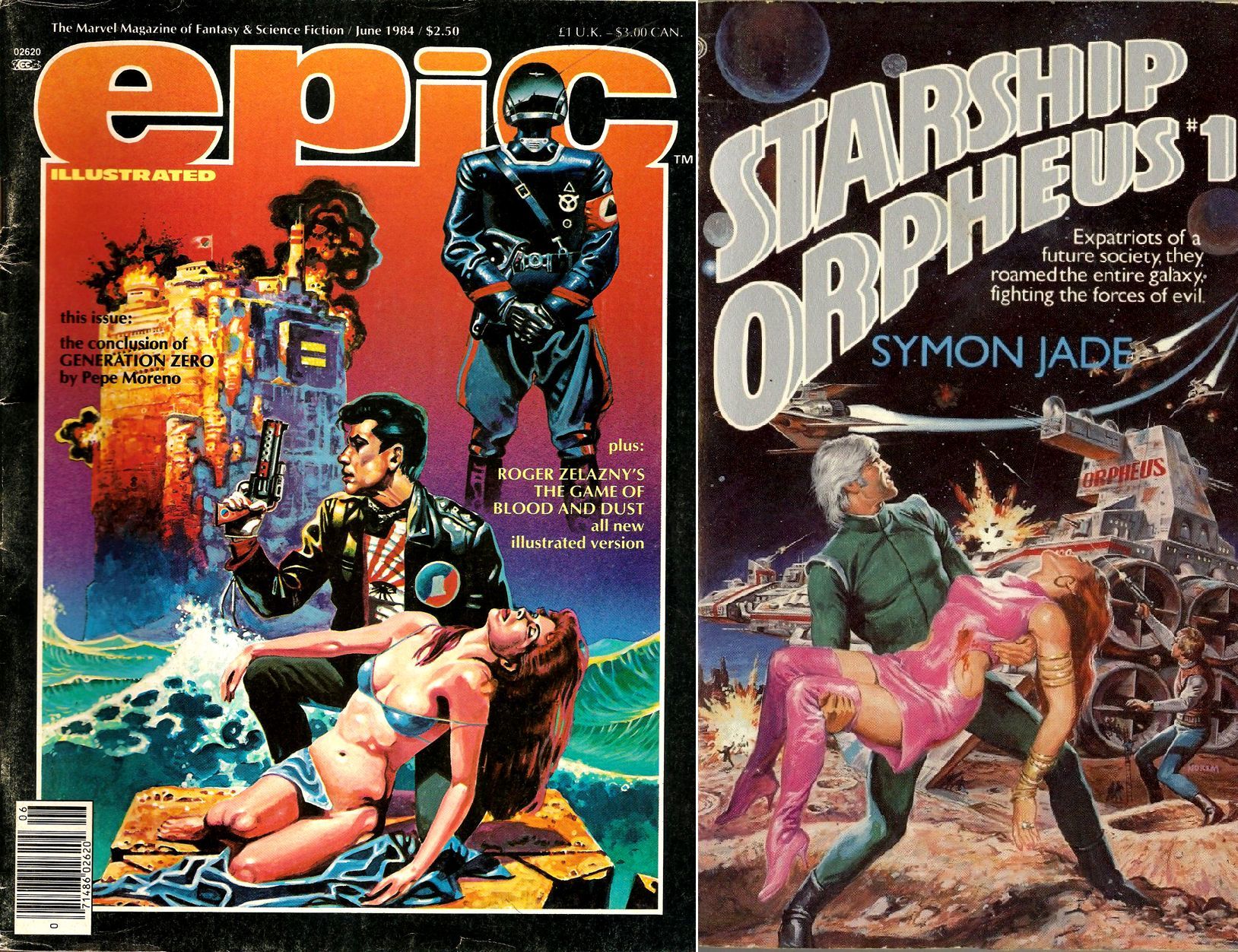 As far as the damsel is concerned, she need not even be conscious.  As long as she’s helplessly positioned below the hero, we’re okay.    Of course, now we’ve strayed a bit from the Conan Pose proper.  The “damsel-so-damn-helpless-she’s-unconscious motif” is perhaps a trope we’ll cover another day. 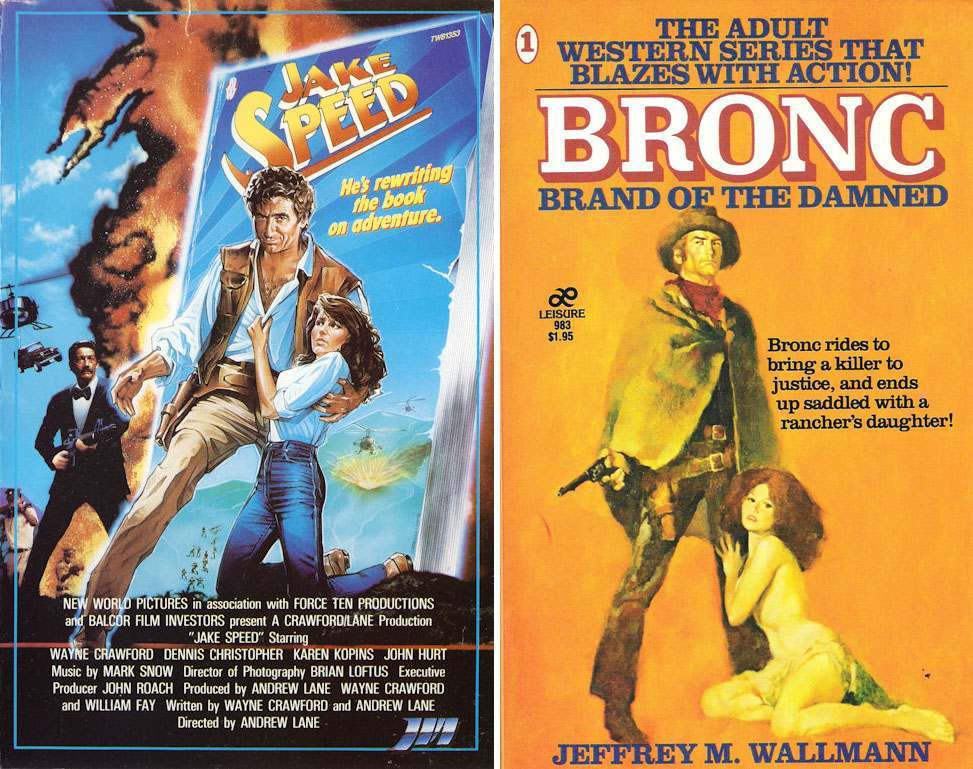 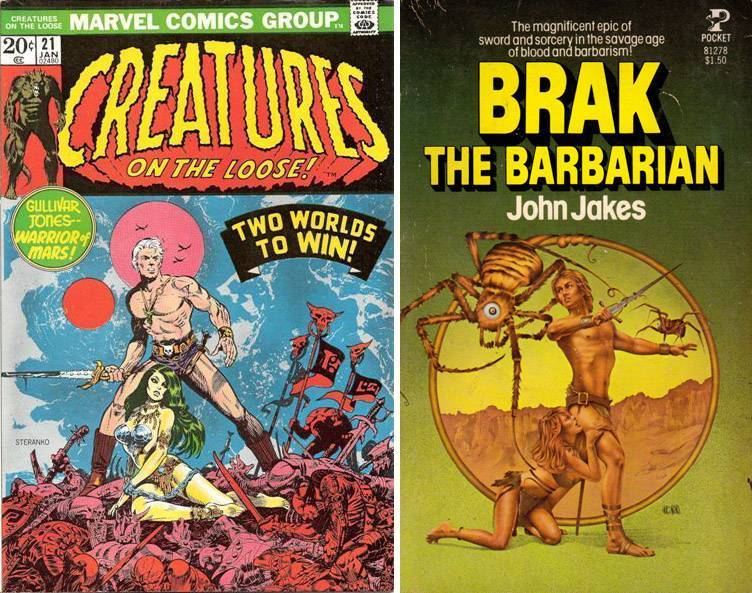 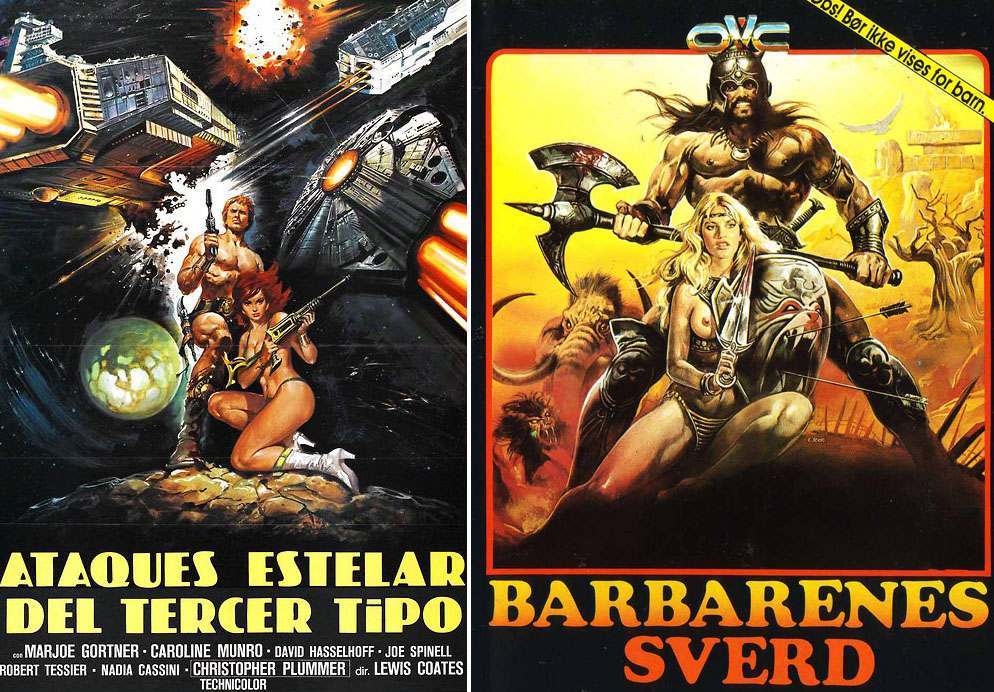 As some of these images illustrate, the Conan Pose knew no geographic boundaries. 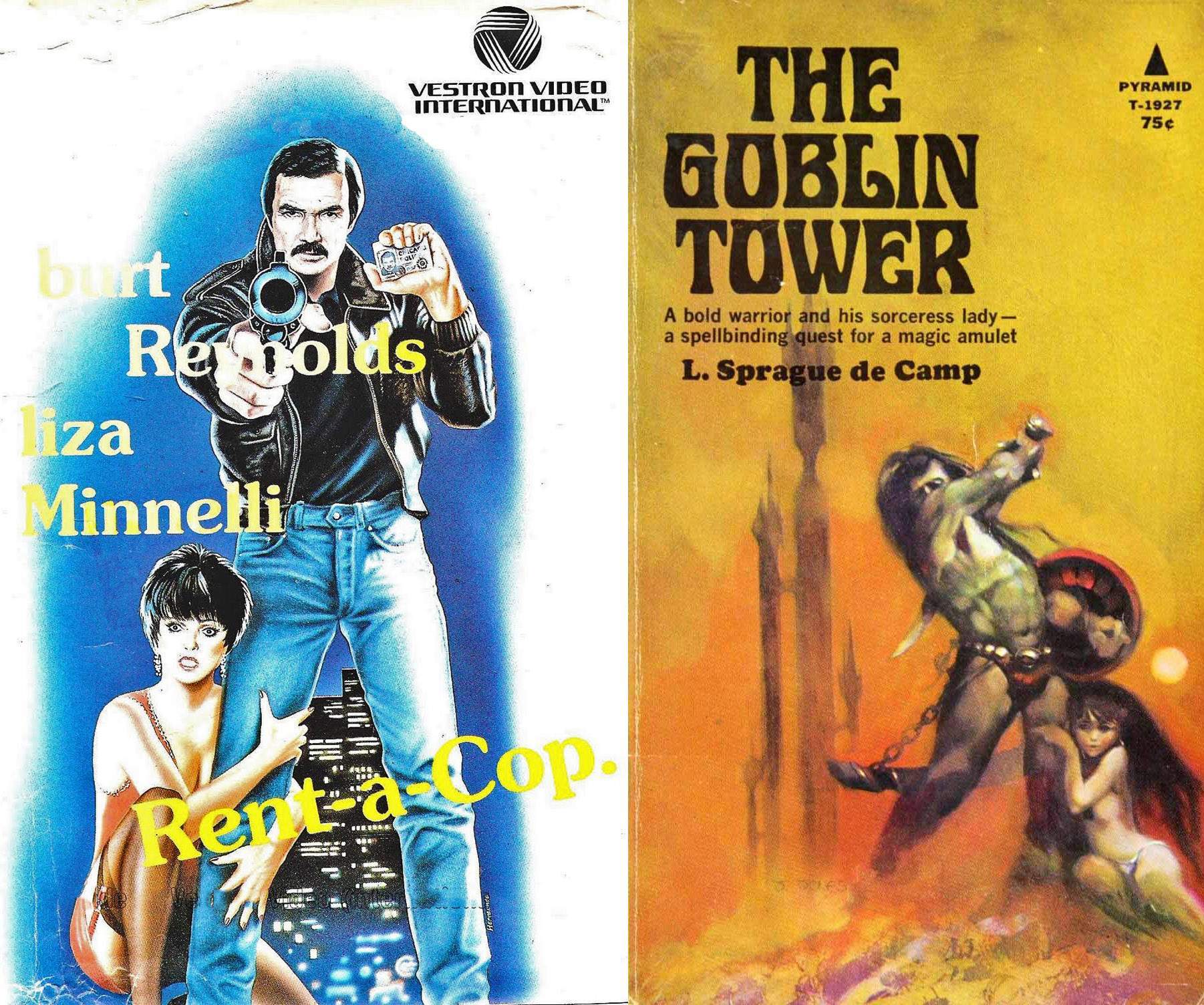 From Burt Reynolds movies to fantasy paperbacks, the “song remains the same”.  It’s truly astounding when you stop and think about it.  What does this say about male-female roles in popular media?…. actually, it’s probably best not to answer that.