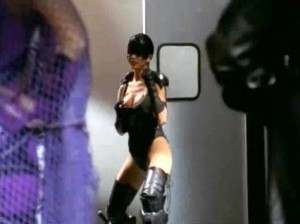 IN terms of television and cinema, we live in an age one rightfully term “Superheroes Triumphant.”

In other words, you can’t trip in a movie house these days without bumping into an auditorium showing another superhero film.

So after several decades of Hollywood getting superheroes decidedly wrong, suddenly the most famous creations of Marvel and D.C. are being treated with enormous respect and fidelity.  These superheroes of the 21st century get films made by top-of-the-line directors, and see budgets that frequently top 200 million dollar.

But in years past, many superheroes – especially those bowing on TV — were simply not so lucky.

Instead, producers only ended up creating terrible, eminently forgettable embarrassments.

There have been some truly lame superhero TV shows over the years, but few are as dreadful or as humiliating as the five programs tallied below, which successfully re-defined “lame” to mean “mask,” “costume,” and “cape.” 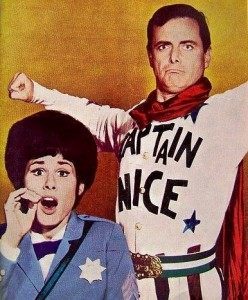 Created in the shadow of ABC’s camp Batman (1966 – 1968), NBC and Buck Henry conjured this short-lived superhero to compete with the Caped Crusader…Captain Nice!

Captain Nice was secretly Carter Nash (William Daniels), a meek police scientist who had developed a super serum granting him incredible powers, including the ability to fly.

Nash/Captain Nice often had to rescue his love interest, Sgt. Candy Kane (Anne Prentiss) in Big Town — think Gotham City — and deal with villains such as the Great Medulla.

Since Buck Henry created both Get Smart (1965 -1970) and Quark (1978), it stands to reason that Captain Nice would have been an equally dynamic, funny and memorable series.

But the problem that few anticipated was that the high-camp Batman was already a parody of itself and comic-book superhero tropes, and so Captain Nice had very little fresh territory to mine.  The series had an impossible mission beating Batman at its own clever game.

Instead, it just looked cheap…and dumb. 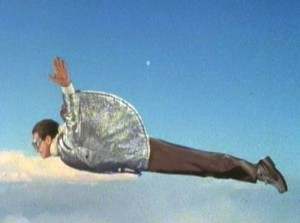 If any TV series could make Captain Nice look like the pinnacle of high art, it was another Batman knock-off from 1967: CBS’s Mr. Terrific.

But like Captain Nice, Mr. Terrific looked threadbare in his silver costume (replete with wings), and he appeared ridiculous every time he took to the air and flapped his wings.

Just to make the nature of the series perfectly clear Mr. Terrific was essentially a regular guy who would pop pills and then find that, upon doing so, he could “do things,” like beat people up, or cruise through the air.

In the era of LSD and rampant recreational drug use, he wasn’t exactly the role model CBS had hoped for…

Like Captain Nice, Mr. Terrific was more concerned with showcasing how stupid superhero tropes were rather than in taking the genre and its protagonists seriously. 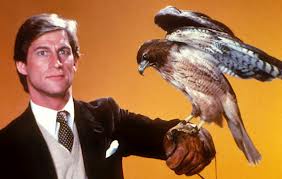 Glen Larson created this short-lived series which TV Guide listed as one of the “50 worst shows of all time.”  Specifically, the magazine called Manimal “astonishingly silly,” “unintentionally hilarious” and noted that the hero, Jonathan Chase (Simon MacCorkindale) looked like “an understudy from Cats.”

Manimal’s premise was that Jonathan Chase, a “man with the brightest of future, the darkest of pasts” had been able — mysteriously — to master the secrets that “divide man from animal, animal from man.”

In other words, he could transform from man to beast and back again, courtesy of some very good-for-the-time but highly-over-used 1980s effects from Stan Winston.

The series lasted just eight episodes, but Manimal likely reached its nadir with “Breath of the Dragon,” a story in which Chase had to battle an Asian martial arts expert, and did so by imitating the characteristics of a mountain gorilla. To see the dignified MacCorkindale hopping around in a circle like a primate during hand-to-hand battle is one of cult-TV’s strangest and most humiliating sights, no doubt.

The overall cheapness of Manimal was apparent not just from the over-used stock footage of Chase’s transformations, but also from the fact that the series shot on a back-lot in California that was supposed to represent New York City. In episodes such as “Scrimshaw,” the World Trade Centers were awkwardly superimposed into the background, but the visual expedient fooled no one. 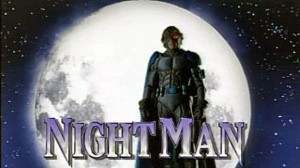 Producer Glen Larson returned to the superhero milieu in the late 1990s with Nightman, a syndicated TV series that actually revived MacCorkindale’s Manimal character, Chase, for one episode during its second season.

Otherwise, Nightman was an adaptation of Steve Englehart’s Malibu Comics hero, Johnny Domino/Nightman.  In the series, Johnny (Matt McColm) — a jazz musician by day – was struck by lightning and this event granted him the ability to “sense evil.”

After getting his hands on a stash of top-secret government weapons and equipment, including an anti-gravity, bullet-proof suit, Johnny used this spider sense — apparently transmitted from man’s future — to fight crime.

One of Nightman’s main enemies was Mr. Keyes (Kim Coates), a computer tycoon who, in one episode, developed an “Ultra Web,” a kind of hellish version of the Internet.

The now defunct Cinescape Magazine once called Nightman “The Cut-Rate Adventures of Cheap Man” because the series’ production values were so questionable, and the stories so “off the shelf” in terms of originality and execution. 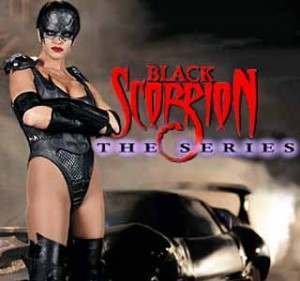 Dr. Howard Margolin, host of the long-lived radio broadcast Destinies: The Voice of Science Fiction once termed this Sci-Fi Channel program from Roger Corman “feces,” and he was right on the money in his curt assessment.

Sometimes billed as “Batman meets Baywatch,” this one-season series starred Michelle Lintel as Black Scorpion, a sexy superhero who patrolled the streets of her city in a Scorpion Mobile by night.  She was a cop by day, and partnered with hunky Scott Valentine.

The series’ main claim to fame was two-fold.

First, the episodes featured over a dozen Playboy playmates as eye candy.

But Black Scorpion was hampered by formulaic plots that were old when Batman used them in the 1960s, and by terrible performances.

Worse, there was also a leering, pandering quality to the show.  The only reason to stick with Black Scorpion was to see the lovely females — invariably clad in leather — tussle in poorly choreographed fight scenes, like the one  excerpted below.

Also, every episode of Black Scorpion played like Batman and Robin (1997), particularly the Mr. Freeze (Arnold Schwarzenegger) scenes.  The villain of the week would constantly and maddeningly “pun” throughout his or her scenes, and it became incredibly irritating.

For instance, a villain who loved plants — named Green Thumb (David Landers) — would say things like “Let’s make like a tree and leave.” Or “Time to nip this chase in the bud.” Or “This bitter harvest isn’t mine…it’s yours.”

The writing was horrendous beyond description. 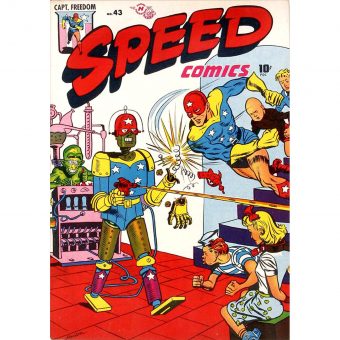