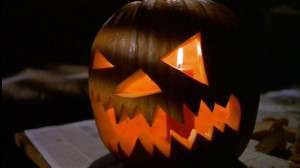 As Halloween 2014 approaches, you probably have your horror movie viewing all set.

However, if you discover that there are some gaps in your scary movie schedule, you might want to consider filling them in with episodes of your favorite cult television series. Over the years, many great programs – from Star Trek (1966 – 1969) to Buffy the Vampire Slayer (1997 – 2003) – have celebrated the season with holiday-themed programming.

Here are five of the best. They aren’t all necessarily terrifying or even scary, but all the programs below capture the essence of the holiday beautifully. 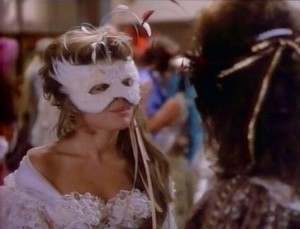 In this fantasy series, Ron Perlman plays Vincent, regal lion man, and Linda Hamilton is lovely Catherine. Their star-crossed romance is inhibited by the fact that in no world, either above (in NYC) or below (in Vincent’s underground community…) can they be together.

In “Masques,” that prohibition is lifted for one night: Halloween. Vincent attends a costume ball set on October 31st, and is able at last to mingle with the “normal” people of the Big Apple. The denizens of New York mistake his monstrous appearance for a (really scary…) costume and so the Beast’s intense isolation is soothed.

The message, of course, is that we fear that which is different, or which we consider ugly, and only on Halloween night — a night of monsters and ghouls — does this prejudice fall. 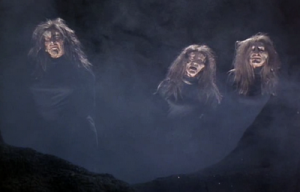 In this second season episode, which aired October 27, 1967, the Enterprise visits the world Pyris VII, and members of the landing party vanish there.  Kirk (William Shatner), Spock (Leonard Nimoy) and Bones (De Forest Kelley) beam down to the surface, only to be warned to return to their starship by three MacBeth-style witches.  They refuse, and probe forward, into a haunted castle where they find that Scotty (James Doohan) and Sulu (George Takei) have been transformed into mindless zombies.

Behind the Halloween trappings are two aliens – warlock Korob (Theo Marcuse) and a witch named Sylvia (Antoinette Bower).  At episode’s end, their trick is revealed.  Their fearsome appearance, and all the Halloween “gags” around them (including a giant, feral black cat…) are mere projections of a device called a “transmuter.”   Sylvia and Korob are really tiny, defenseless alien creatures, hoping to use illusions to keep the Enterprise away. 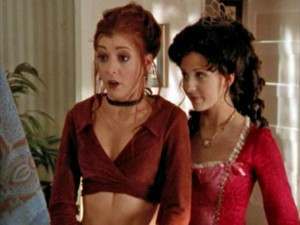 In this second season episode of Joss Whedon’s series, viewers learn that Halloween is the one night of the year in which Sunnydale’s vampires stay in and watch television. Apparently the undead don’t appreciate the crass consumerism of the Halloween holiday.

Dressed as a soldier, Xander gains courage while Buffy –- garbed as a 17th century damsel-in-distress — loses hers. And Willow, costumed as a ghost, develops the powers and physical limitations of an apparition.  The episode becomes, in short order, a meditation on identity (later the core theme of Whedon’s Dollhouse). No matter the trickery or circumstances, we are all who we are, or, finally, who we are supposed to be.  We may put on costumes or masks, but underneath our “core” is immutable. 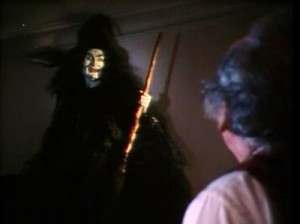 Written by George A. Romero and directed by Bob Balaban, the premiere episode of this horror anthology — “Trick of Treat” — involves an old miser, Mr. Hackles (Barnard Hughes) who “collects every penny” that is due him, and gives nothing back to the poor farmers in his community who support his business at a general store. Worse, Hackles has established himself as a sort of local bank by offering the farmers ample credit when the chips are down. With nowhere to turn, they accept his help, only to see him ruthlessly leverage control of their very lives. Explicitly, the vulture-like Hackles derides “the little people and their little lives.”

Accordingly, on Halloween night, this “self-made” man doesn’t give out candy because it would be a hand-out. Instead, he dispenses advice. He tells young Trick or Treaters that “I made my fortune…and so should you.”

Each year on Halloween night, Mr. Hackles also instructs the poor farmers to deliver to his house their children. There, they will be permitted to search the imposing edifice for his I.O.U.s.  If the children find them, their parents’ debt will be completely absolved.  If not, the debt stands. But in all the years Hackles has played his sadistic game, no child has ever found the stash of creditor’s notes because Hackles arranges nightmarish “frights” for the children: booby traps and monster effigies that scare the kids away.

But in “Trick or Treat,” Mr. Hackles, gets his supernatural comeuppance. Witches and ghouls occupy his house, take his money, and deliver him to Hell where he so richly belongs.  Amusingly, Hackles goes to Hell of his own volition, absent-mindedly following wads of cash down the corridors of Perdition. Notably, in the end, Hackles feels treated unfairly by those who wield more power than he does.

But Mr. Hackles…I thought we all made our own misfortune?  Aren’t you a self-made man? 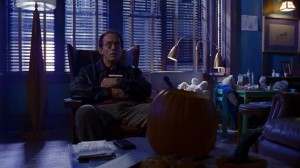 This memorable episode of Chris Carter’s cult classic provides a peek at what an average Halloween is like for everyone’s favorite criminal profiler:  Frank Black (Lance Henriksen).

The episode features visual nods to both The Simpsons and Space: Above and Beyond (1995), but more meaningfully, it gazes at a specific Halloween from Frank’s youth, and the way that it has continued to affect him throughout his life.

“The Curse of Frank Black” is part whimsy and part tragedy, and goes a long way towards contextualizing the character’s history.  Here we see what a gentle soul Frank really is, and how his abilities have separated him even from his beloved family.

“The Curse of Frank Black” occurs during a span in which Frank is estranged from his wife and the Millennium Group, and banished from his paradise…his perfect yellow house. Frank visits that house in this episode, and confronts some of the ghosts that have long been haunting him.

Frank’s whole life, after a fashion, has been Halloween, and here we learn that neighborhood children tell scary stories about him and ghosts are drawn to him. He is but a lonely man seeking some measure of happiness and companionship, and “The Curse of Frank Black” reveals the character at his most human, ironically, on a night of ghosts and ghouls.