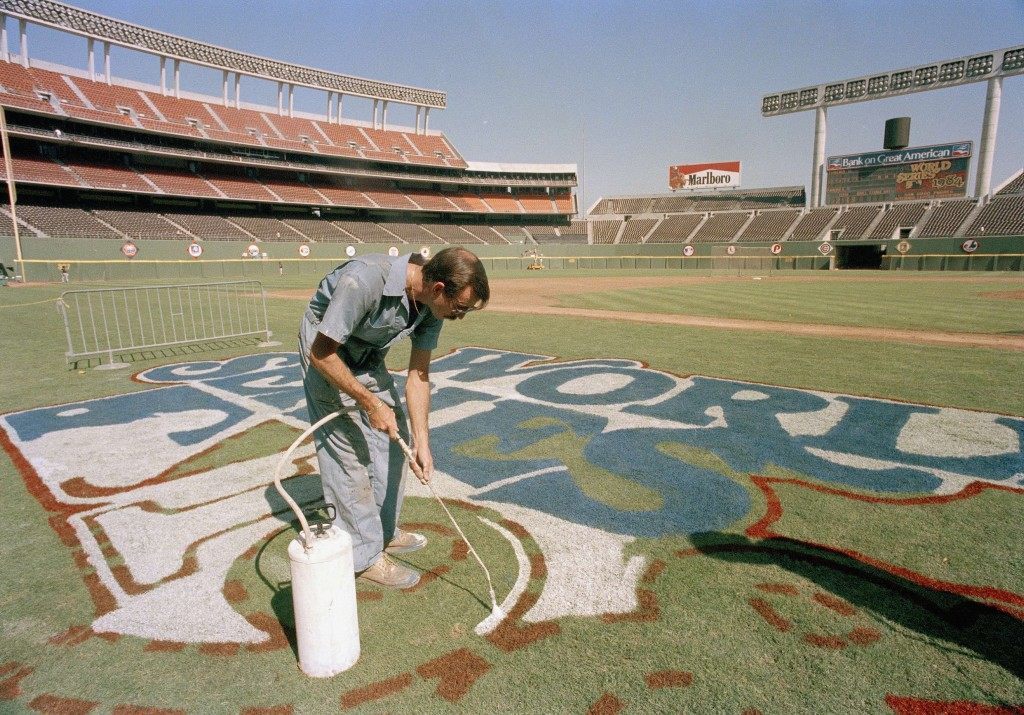 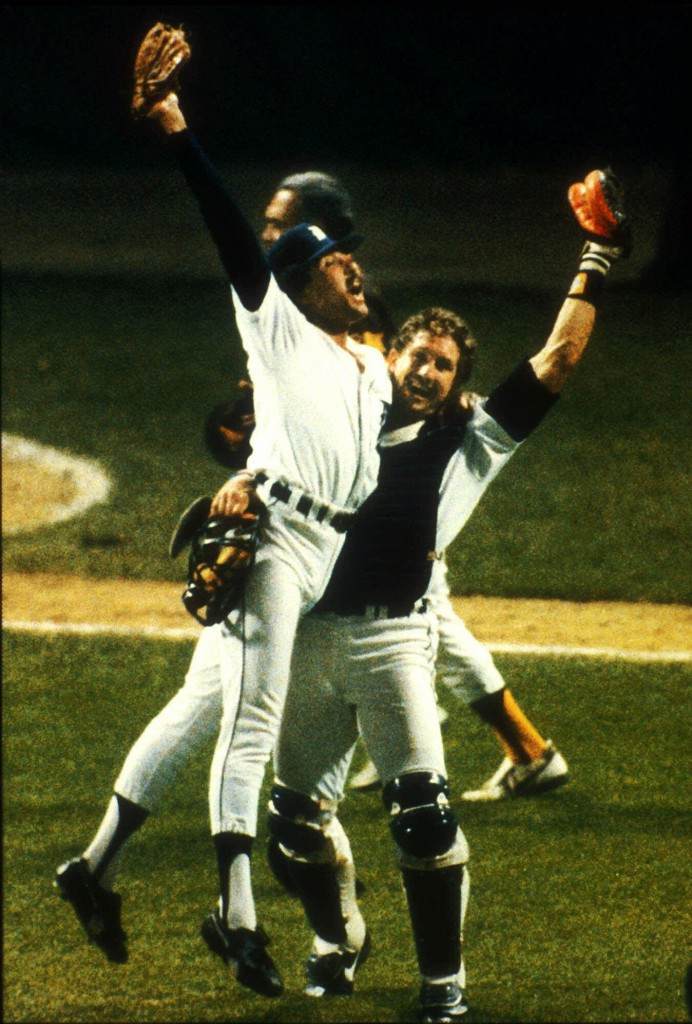 There was a parade in Detroit. 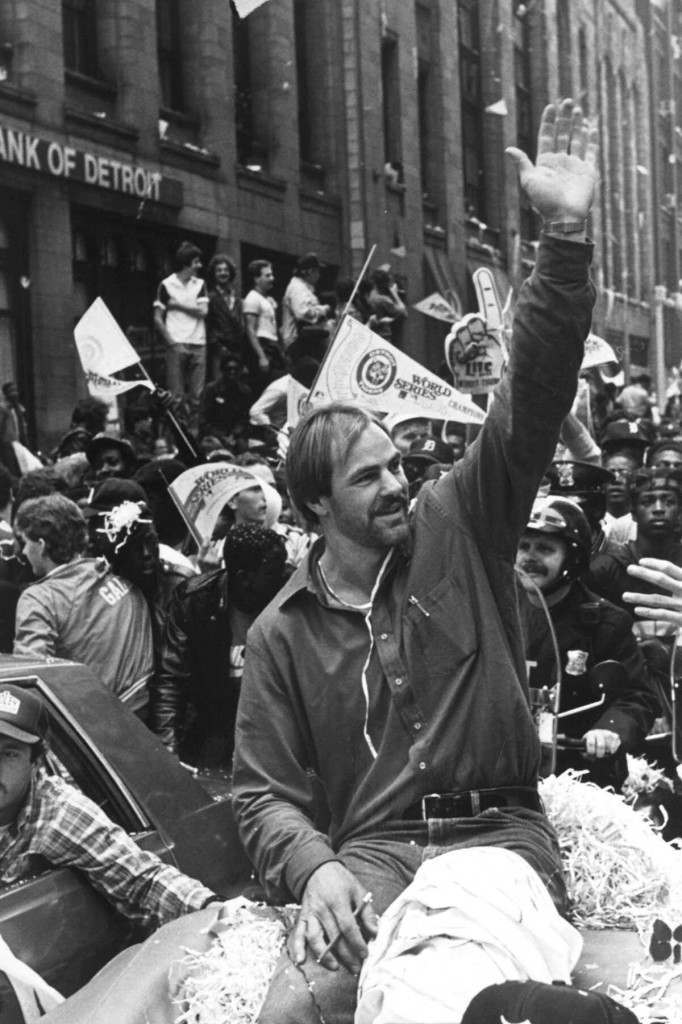 Detoit Tigers’ Kirk Gibson waves to the crowd, Oct. 17, 1984, who were on hand for the ticker-tape parade through downtown Detroit in honor of the World Series champion Tigers. Gibson hit one of the most famous World Series home runs at Tiger Stadium. (AP Photo/Mark Cornillie) Ref #: PA.8672677

Love was in the air. 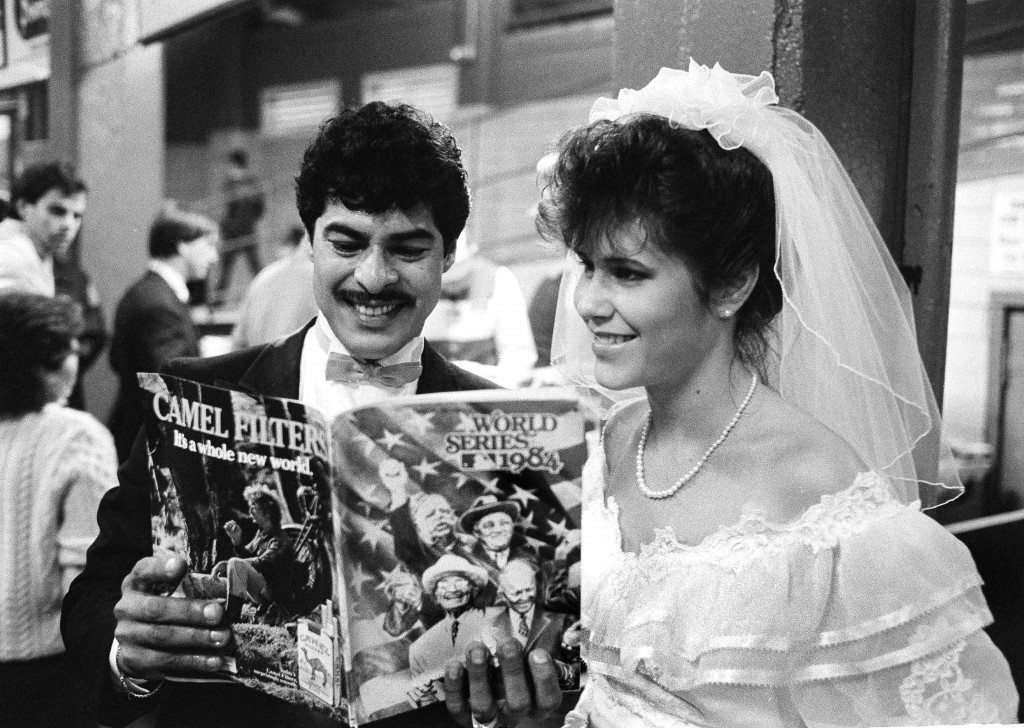 Anthony Sanchez and his bride of several hours, Charlotte, study a World Series program at Tiger Stadium in Detroit, Oct. 14, 1984. They came to game five of the Detroit-San Diego match-up from their wedding ceremony at nearby Dearborn Heights. The couple will live in Taylor, Mich., but not until after the baseball game. (AP Photo/Mark Duncan) Ref #: PA.18100716

The riots that erupted after the Tigers’ World Series victory over the San Diego Padres in 1984 left one person dead and 80 injured. Eight rapes were reported, along with millions of dollars in property damage. Detroiters overturned and burned a squad car and a taxi and hurled rocks and bottles at police wearing riot gear. 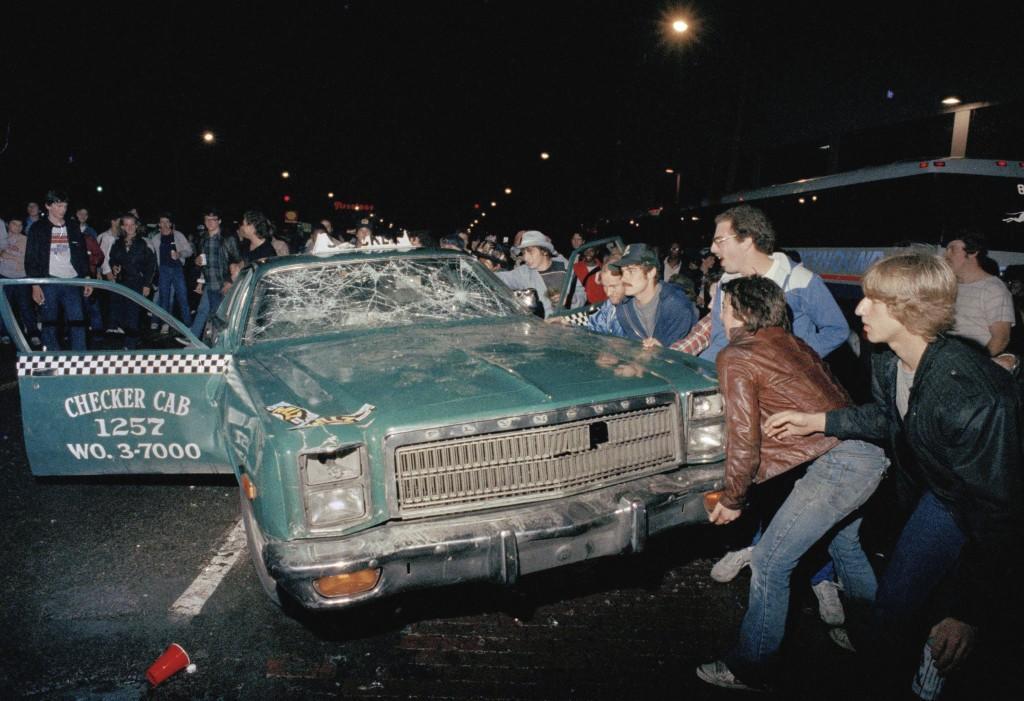 “I did it for my sister,” Helms would later say. “I told her, I promised her that I’d get on TV or get a picture taken.”

He became a kind of hero.

Bubba Helms stands next to a burning Detroit police car after the Detroit Tigers beat the San Diego Padres to win the 1984 World Series in Detroit. Helms became a folk hero of sorts; two weeks after the Tigers won, a number of people came to Detroit-area Halloween parties dressed like him. The rest of his life, though, would be marked by failure, drug addiction, mental illness and a broken marriage. (AP Photo/Joe Kennedy) 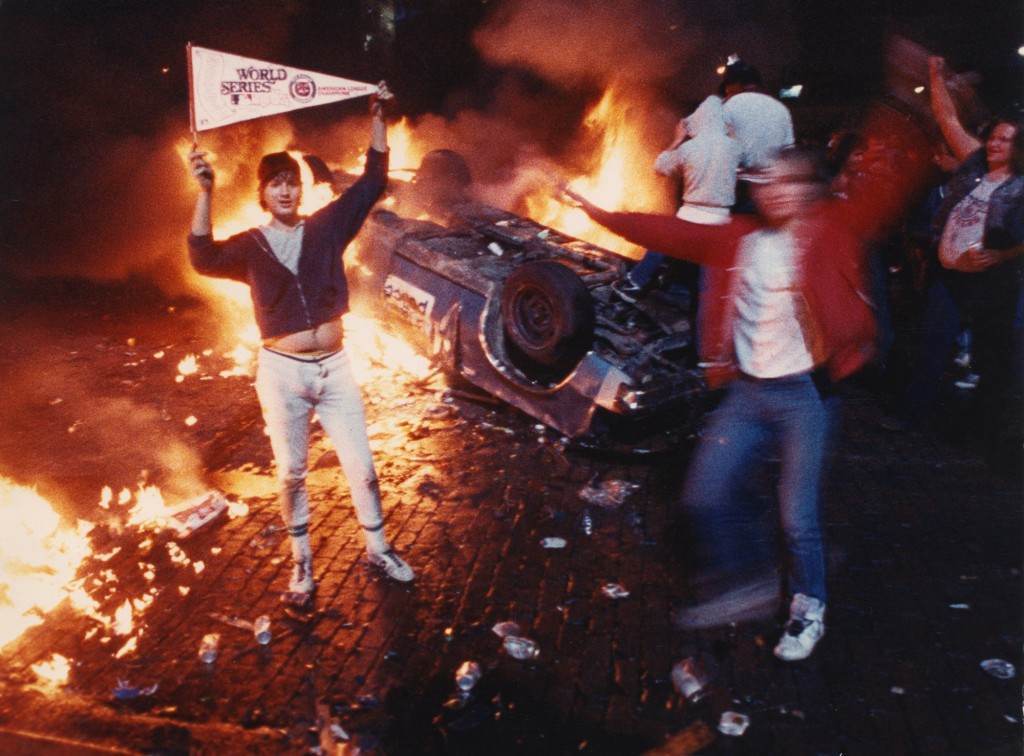 Bubba Helms, left, celebrates after the Detroit Tigers won the 1984 World Series in Detroit in 1984. Detroit erupted into chaos in 1984, following the Tigers’ World Series victory over the San Diego Padres. There hasn’t been a riot since then, but the image of chaos in Detroit has become so ingrained that officials find it necessary to point out when local fans behave themselves. (AP Photo/Robert Kozloff)

In April 2001, just as baseball season started up, Bubba Helms put a shotgun in his mouth and pulled the trigger. “Helms’ 2-year-old son was in his grandpa’s arms, watching, as his dad pulled the trigger,” the Free Press reported. The shot didn’t kill him, just shattered his jaw, and the hospital eventually sent him on his way with a prescription for painkillers. He took an entire bottle, and died.

His nephew found something in Helms’s closet while going through his belongings, the Free Press wrote. It was 1984 Detroit Tigers pennant. The family still had the newspaper clippings of Helms holding it at the riots. It had always been the highlight of his life. 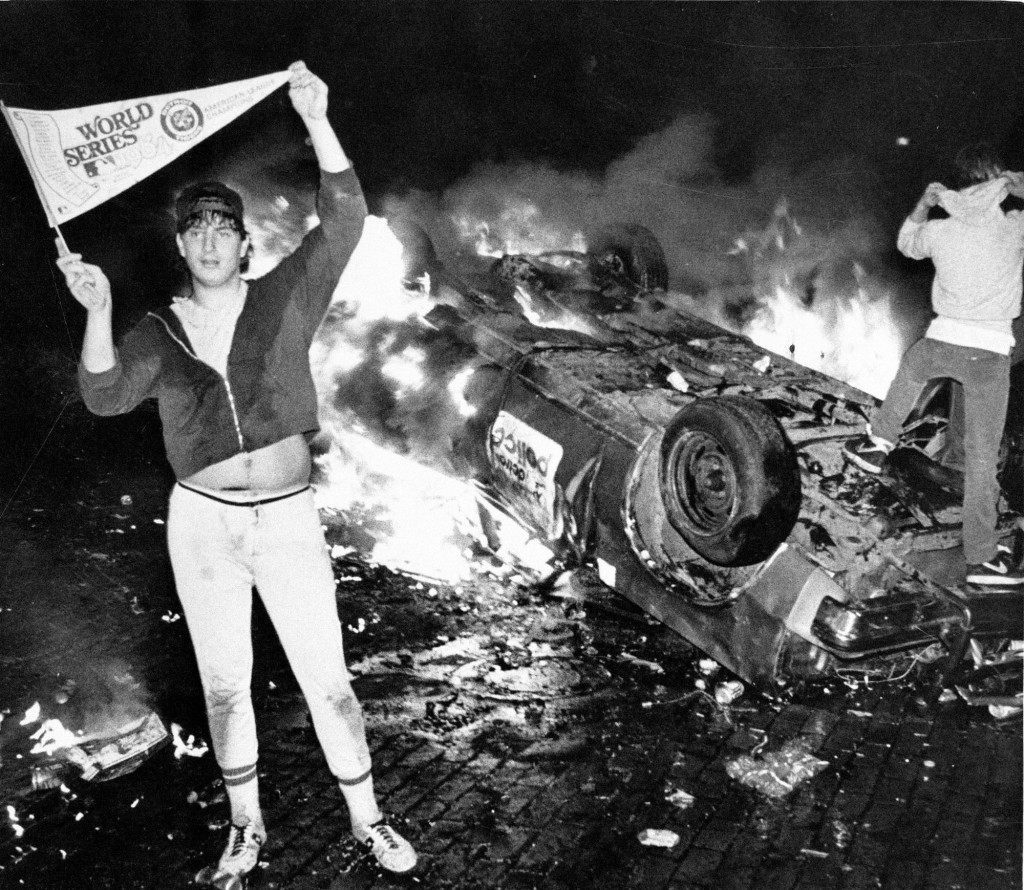 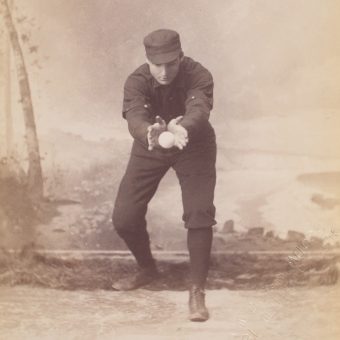 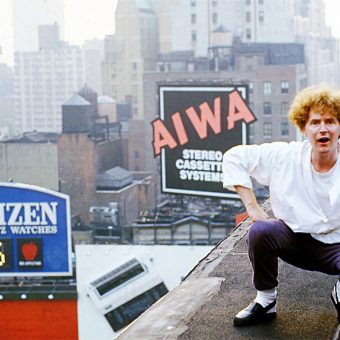