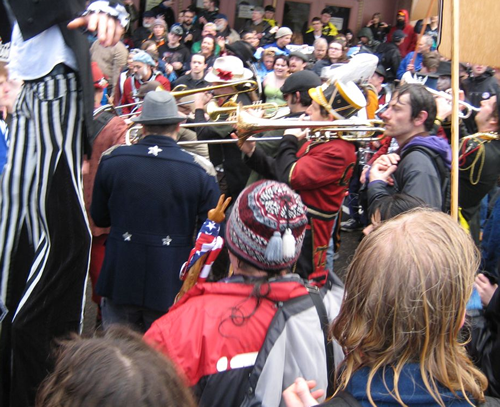 LEAFLETS? Check. Placard? Check. Amonia? Check. Euphonium? Check.
Cometh the hour, cometh the trad jazz band. This is the iron law of public campaigning. No sooner is a committee formed, than the jazzers turn up like the bent coin in Humphrey Lyttelton’s Bad Penny Blues. Look, there they are – behind the man on stilts.

It is egotism, not idealism, that drives them, which is why they will happily offer their services to anything from a church fête to a sex offenders’ convention.

Like hospital disc jockeys, jazz musicians love the sound of their own voice — or their own tubas, trumpets and slide trombones — and they will grab any chance to inflict their perversion on the innocent.

Just as the phrase “Cheer up, it might never happen” is guaranteed to bring still deeper misery, so the sound of banjo-strummin’, tuba-puffin’, waistcoat-and-boater-wearin’ grandads whippin’ up a storm can be relied on to spread unremitting gloom.

With a public approval rating that ranges from indifference (beer tents) through to outright hostility (crowded shopping precincts), trad jazz is in the doldrums.

In this climate, a dream gig is a keg of real ale and a plate of sandwiches. No wonder they are happy to play anywhere there is an audience, however impervious it may be to their relentless bonhomie. Fields, marquees and floats are their “stomping” grounds, where they root and toot to their hearts’ content, deluding themselves that they are contributing, in their own modest way, to the gaiety of the nation.

The jazzers’ relationship to their charitable hosts is classically parasitic. While the parasite thrives on the public exposure, and grows fat on the free beer and sandwiches, the host is invariably laid low. Hello Dolly is nothing less than the death knell de nos jours, and its stripey-blazered performers are harbingers of doom, every bit as dangerous as those of mythology.
Down the years, the jazzers’ tours of duty have taken them from “Save the GLC” festivals to the ill-fated G20 protest. The result is always the same: abject defeat.

Norman Willis was the hapless leader of the TUC (ask your dad) during the high tide of Margaret Thatcher. He was last seen leading a bedraggled trade union march to oblivion, while accompanying a trad jazz band on comb-and-paper. Big Norm retired hurt soon afterwards, but the band plays on. 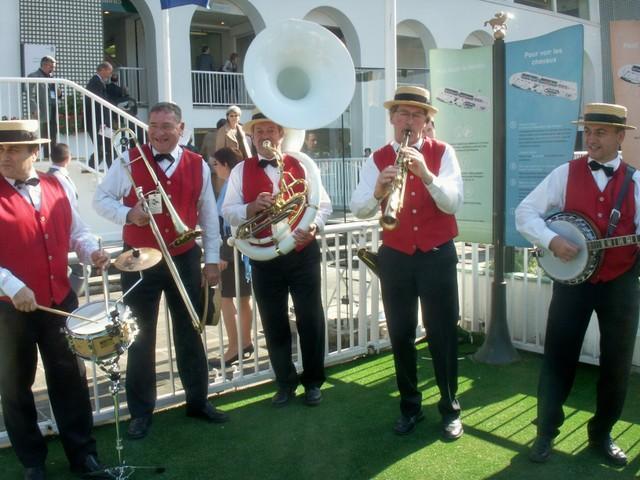