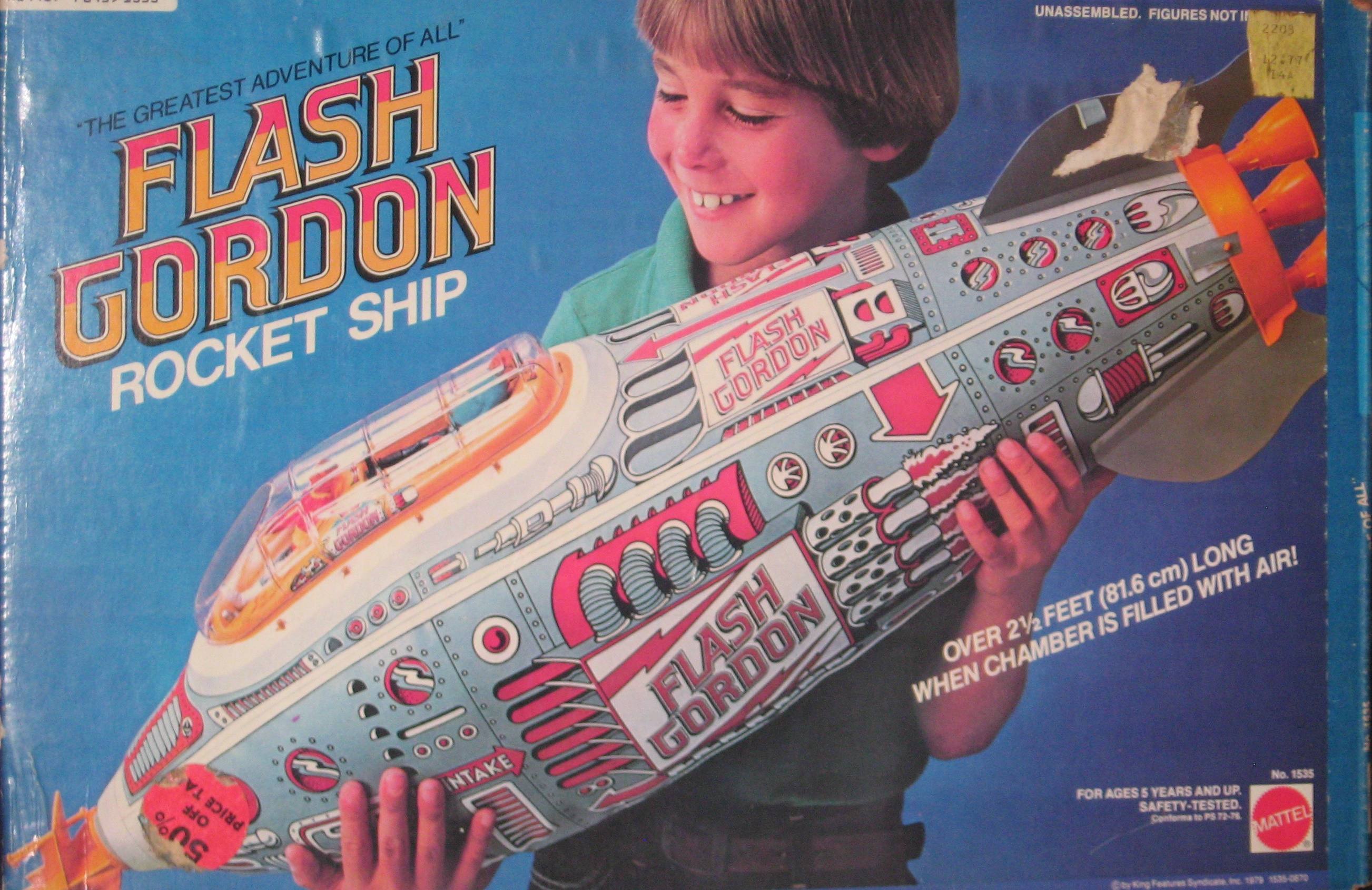 It was, without exaggeration, the great age of cinematic space adventures and merchandise tie-ins.  Additionally, there were the knock-off toys (like Starroid Raiders and STAR Team) and fantastic toy-lines from Japan (like Micro-Man, re-packaged as Micronauts in the U.S.). The choices for imaginative play were numerous, and incredible.

Your mileage may vary, of course, but these are my picks for the seven great toy spaceships of the seventies. 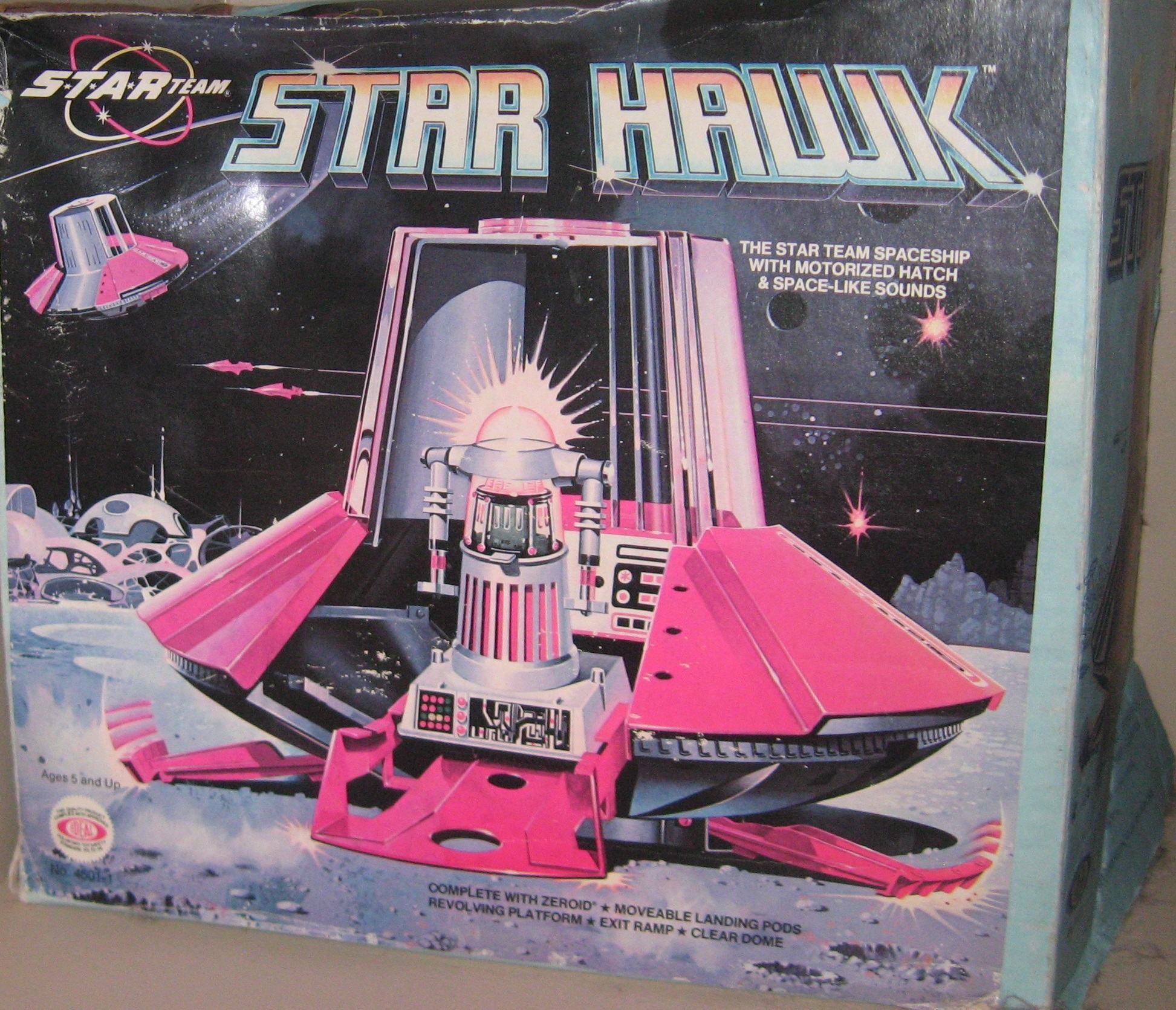 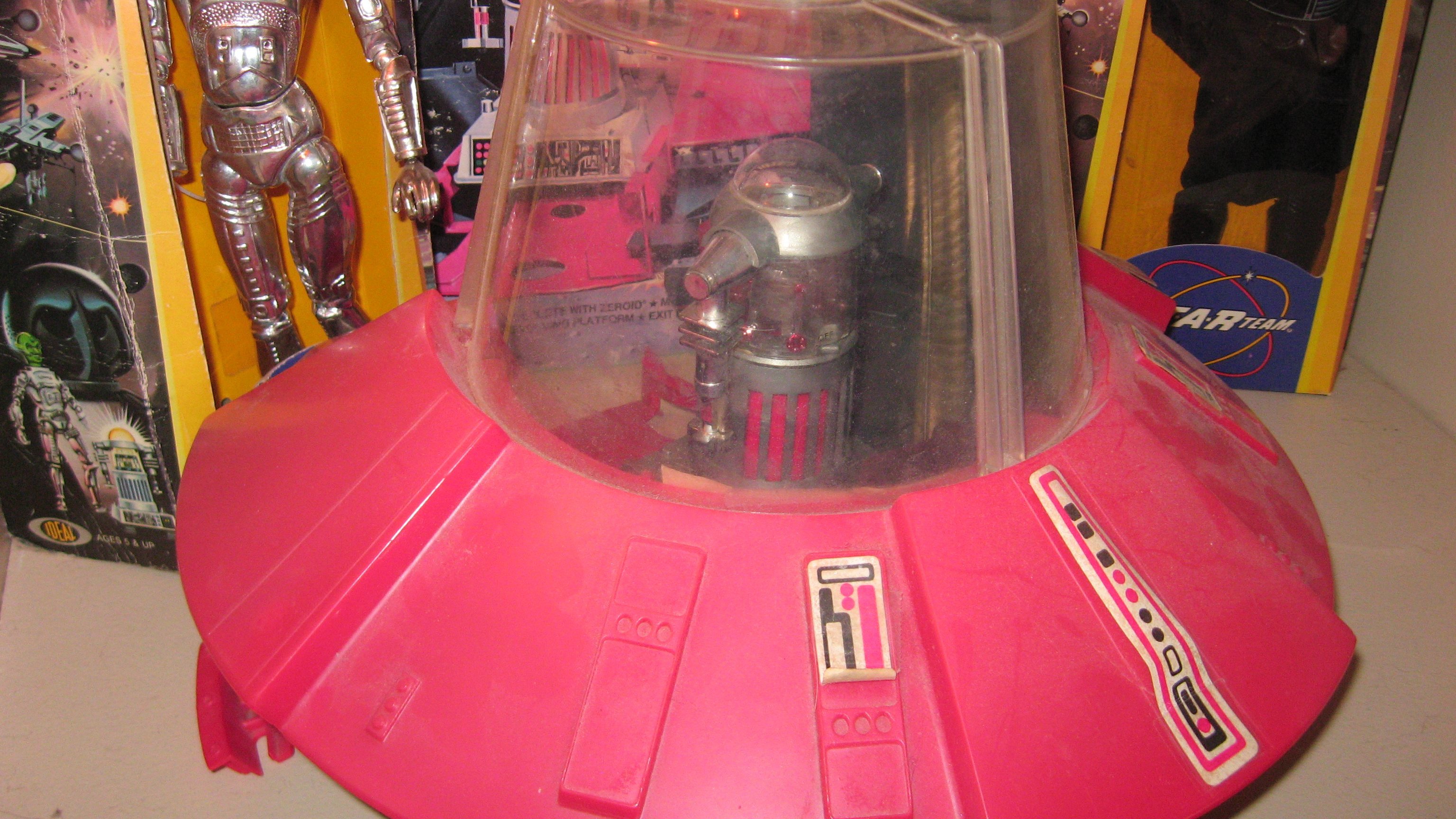 May I evangelize some more about the Ideal S.T.A.R. Team (the subject of a recent article I wrote)?

Yes, the toys were abundantly derivative of Star Wars.  The Knight of Darkness looked like Darth Vader, and Zem-21 resembled C-3PO.

But they were still awesome.

The Star Hawk itself is a giant red and gray flying saucer-like ship with a transparent dome, and an internal cockpit. The door opens, and a gantry lowers, allowing the ship’s inhabitant (the R2-knock-off: Zeroid) to disembark from the vehicle.

Complete with landing struts and a mechanical sound to accompany the rotating door, the Star Hawk was and remains a great ship. 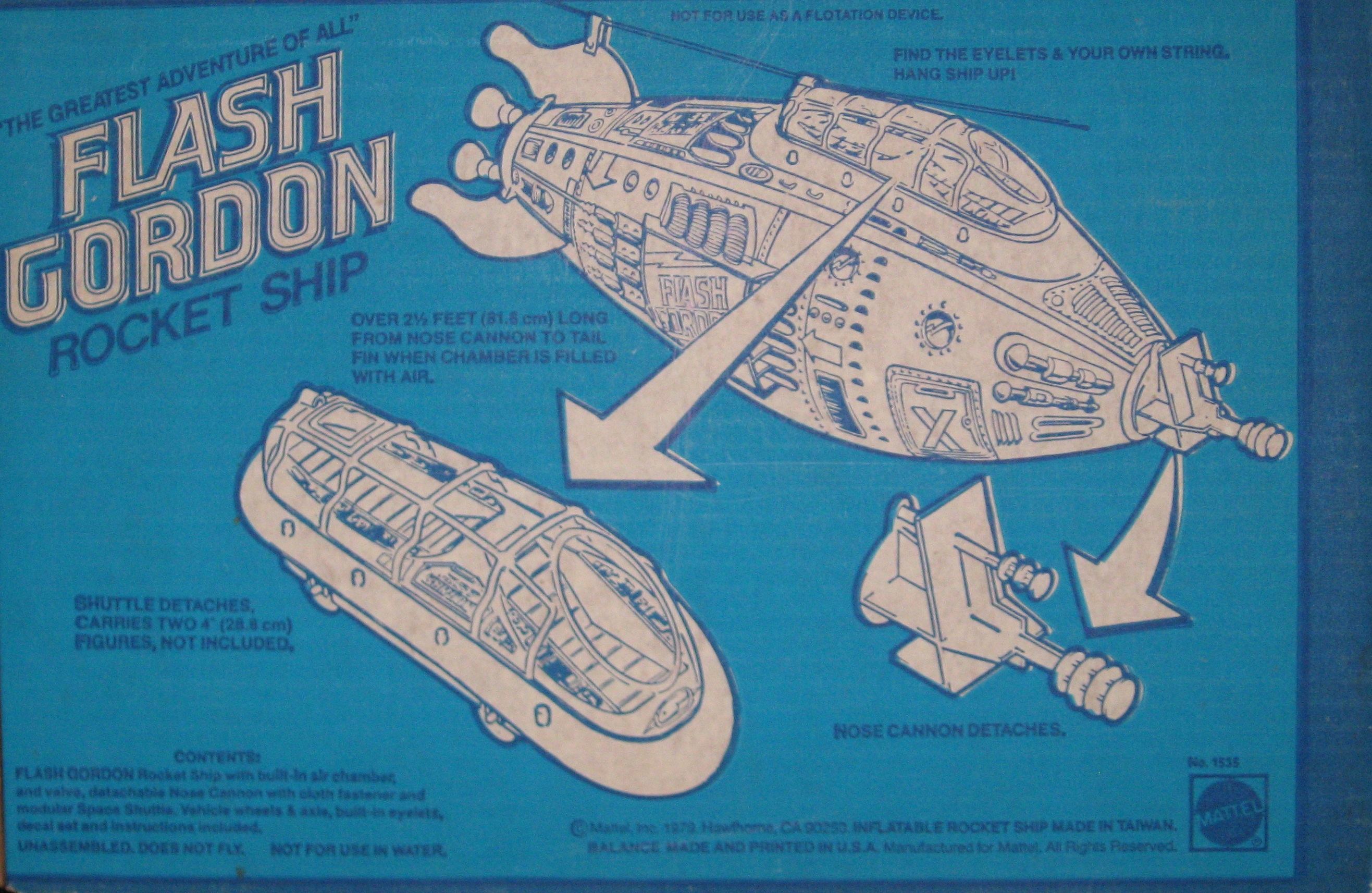 From the year 1979 comes this colossal rocket ship. The Flash Gordon rocket was inflatable — that’s right, it was a balloon, essentially — that stretched nearly three feet long. On the top of the balloon was a cockpit which could housetwo action figures and then detach to carry Flash or Zarkov (not included) on an adventure. Yep, it doubled as a “modular space shuttle.” The nose cannon also detached from the central rocket (and “re-mounts with cloth fastener!”).

Although you were out of luck if the Flash Gordon rocket ship got punctured and deflated, it was a great toy because you could toss it around the room, or around the great outdoors, and watch it cruise in for a landing like a giant blimp. 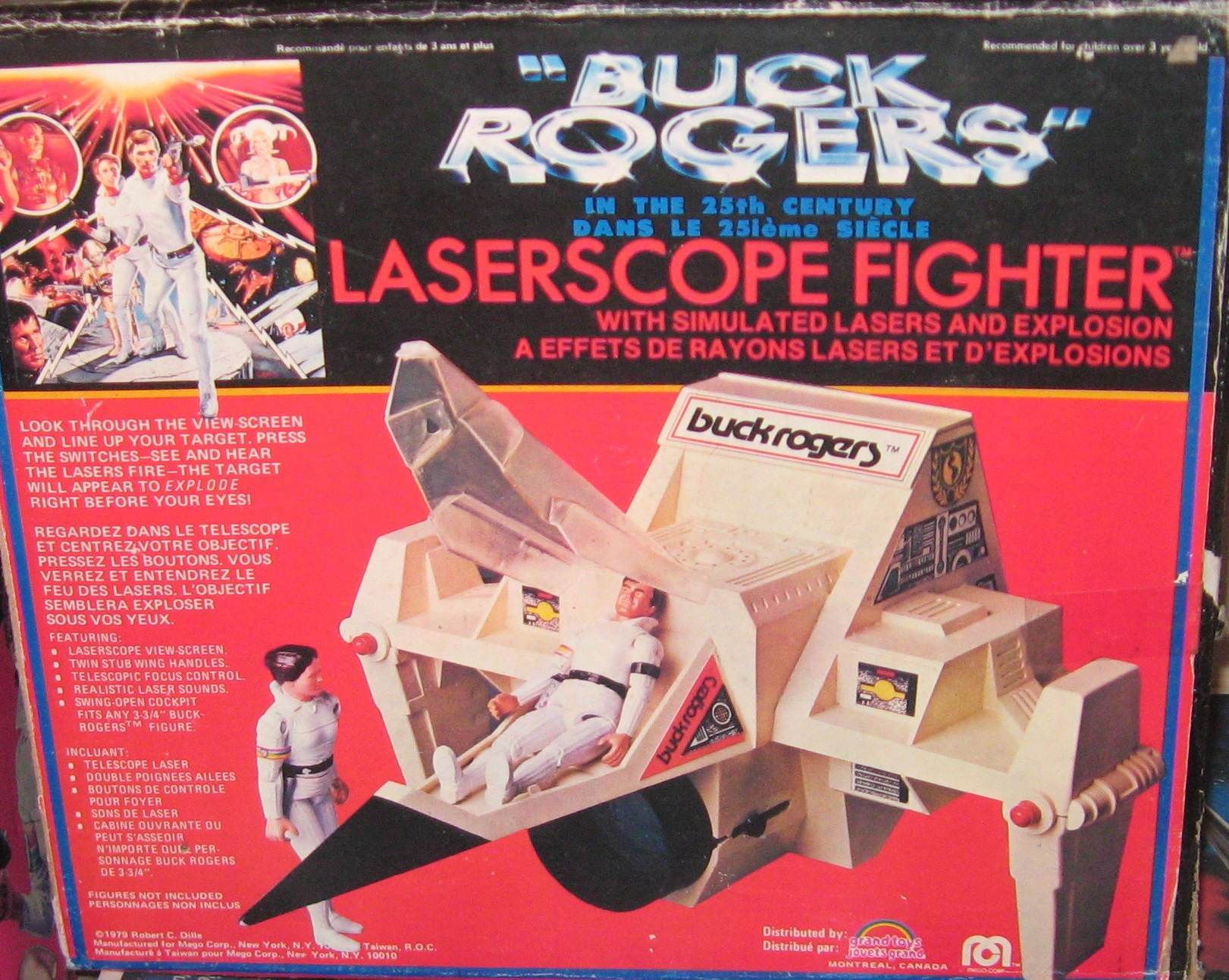 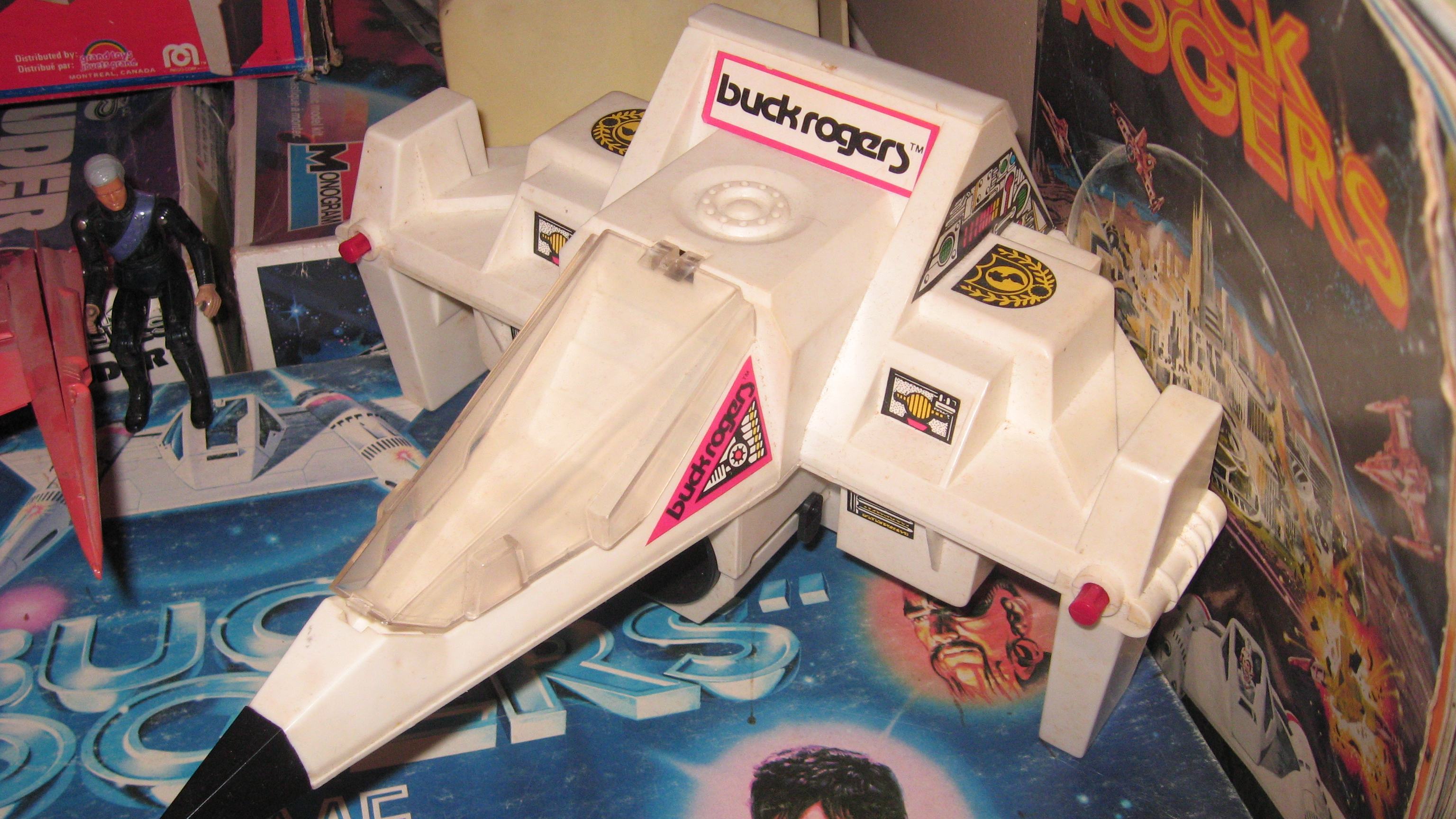 Also tagged with a 1979 copyright date, this “laserscope” fighter from Buck Rogers in the 25th Century is not at all movie or TV accurate. We should get that out of the way first. In short, Buck (Gil Gerard) never, ever, flew a ship that looked like this one.

However, the toy itself was still pretty neat. This sharp-nosed space fighter “with simulated lasers and explosions” featured a cockpit for the 3.5 inch Buck Rogers action figures. But more interestingly, it possessed a rear-mounted view screen through which you could track, target, and incinerate enemies. The box explains: “Look through the view-screen and line up your target, press the switches – see and hear the lasers fire – the target will appear to explode right before your very eyes!”

In child-speak, that sentence means that you can fly the ship around the house, get your older sister in your cross-hairs, and blow her to smithereens.  Whoo-hoo! 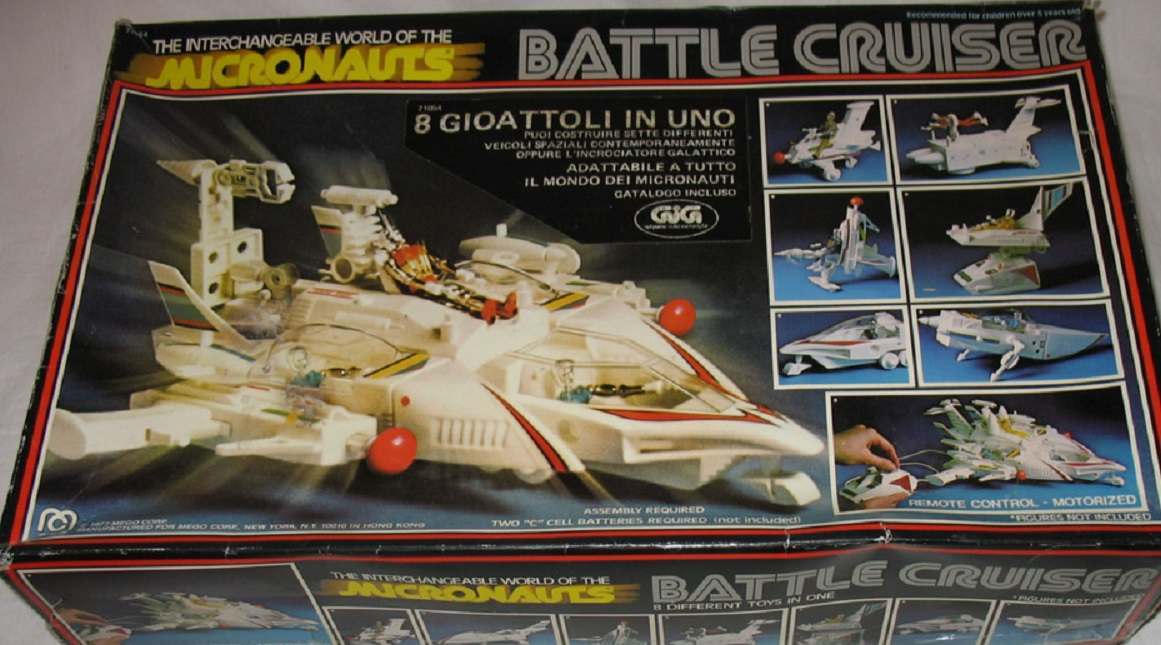 Is the Battlecruiser a spaceship, a land vehicle, a plane…what?

I’m going to cheat a little and say it’s all-of-the-above.

Certainly, I took it on some amazing space adventures as a seven or eight year old kid.  Basically, this is another huge toy that can come apart into several smaller vehicles. In fact, it separates into six ships, if I’m not mistaken: a front racer, two spaceships, two rocket bikes, and the central hull.  What remains really cool about the Battlecruiser is that you can re-configure it in any way you want, and that you can launch the front racer from the body of the ship.  You could also put a whole crew of Micronauts aboard this baby. 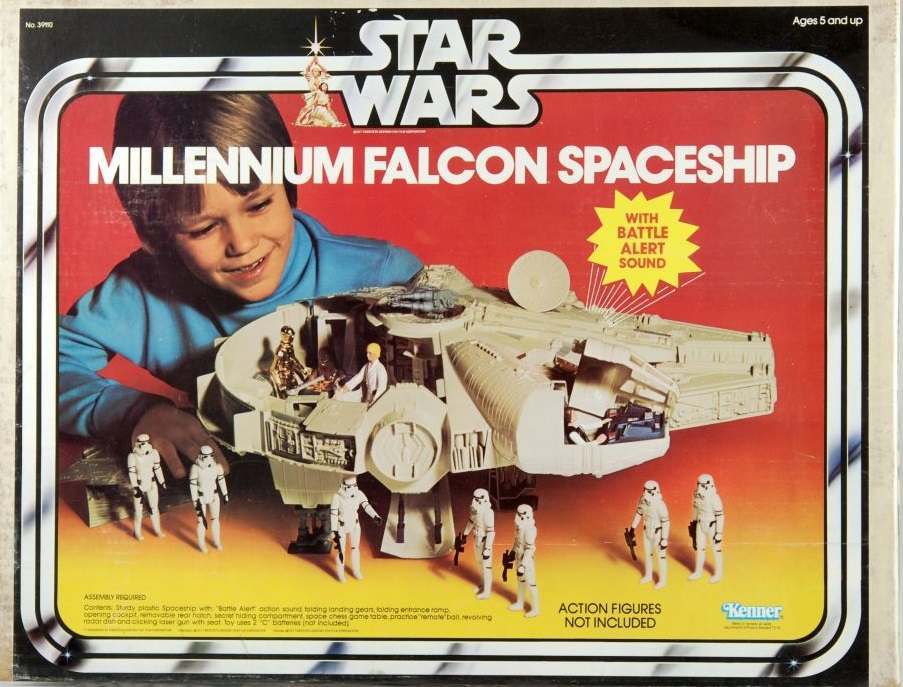 I received this spaceship toy as a gift, I believe, for my tenth birthday, on December 3, 1979. Like the other toys on the list, it is huge, and relatively accurate to the details you see in George Lucas’s movie.  The ship has retractable landing gear, and a rear compartment with a holographic chess board, a smuggling compartment, Luke’s practice area (with the zapping probe), and the gun turret. The cockpit, though unreachable from the back of the Falcon, was also well-detailed and could house two pilots.

Looking at this toy today, all I can say is, “Chewie, we’re home…” 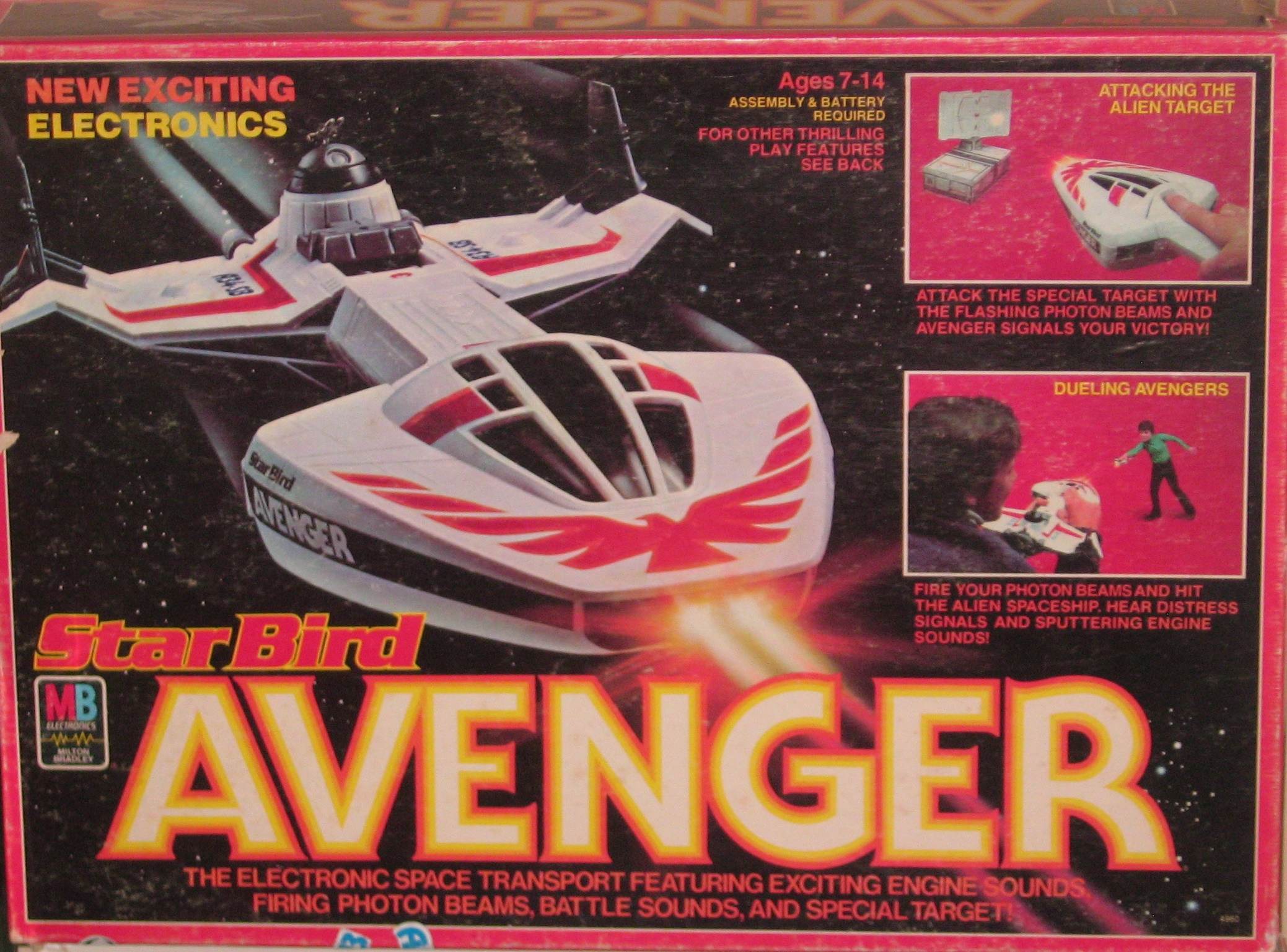 The Star Bird was first released in 1978, shortly after Star Wars took the world by storm, and was state-of-the-art for the time because if you owned two Star Birds (the enemy ship was called an “Intruder…”) they could electronically duel with one other.

Or as the box described it: “Fire your photon beams and hit the alien spaceship. Hear distress signals and sputtering engine sounds!” In the event you didn’t have two ships, the Star Bird also was sold with an “alien target.” The box art noted that you could: “Attack the special target with the flashing photon beams and Avenger signals your victory!”

I loved the Star Bird because it was actually many starships in one. Mounted on the ship’s dorsal side was an “escape pod” and cannon. Per the box: “Rotating gun turret – rear gun turret doubles as an escape pod. Just release the retainer and go whirling through space.”

I can’t even tell you the number of adventures that my best friend and I had with the Star Bird Avenger and related Milton Bradley toys, including the ship’s headquarters, the Star Bird Command Base. 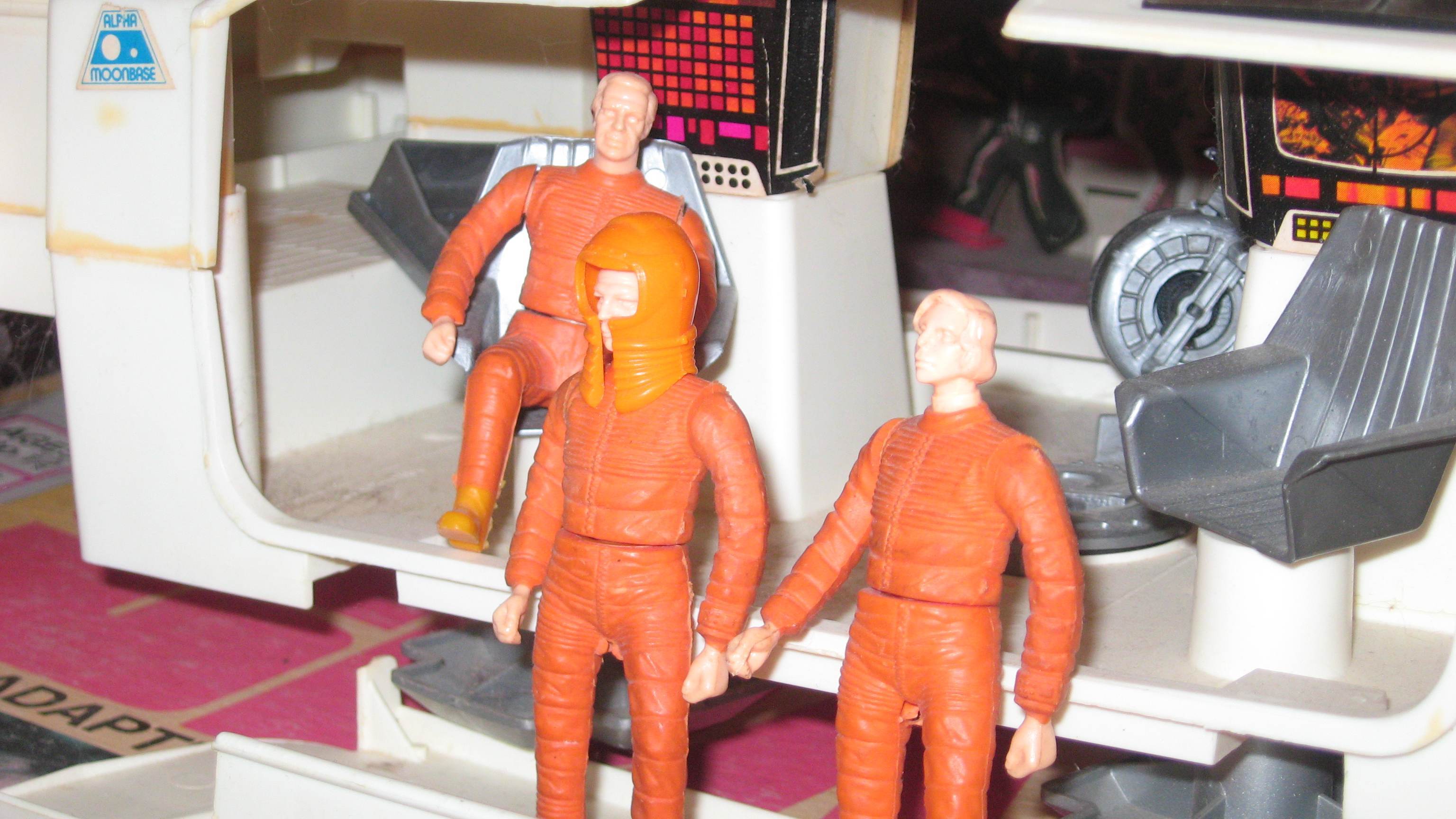 Quite simply the greatest toy of the 1970s, and the great toy of my childhood.

The Eagle One from the Gerry and Sylvia Anderson series Space: 1999 was another huge toy. Like the Flash Gordon rocket, it was over two-and-a-half feet in length, making it a goliath.  The Eagle was not only relatively show-accurate (especially for the time), but could detach into a smaller scout Eagle (a sparrow?), a combination of the command and engine modules.

The craft also had side bay doors that could open and close, and interior with seats, computer decals, and a winch to lower action figures through a deck hatch, and even a weapons rack with stun guns and a laser rifle.  For 1976, the attention to getting all these details right was astonishing.

In short, this was The Toy to get when I was six years old.  I could hardly lift it and fly it around the room, but it was an unforgettable and awesome toy.