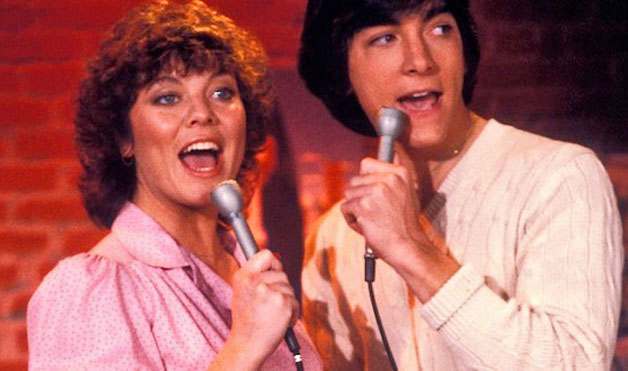 There have been plenty of great TV themes over the years.  Among my favorites: Mary Tyler Moore, UFO, M*A*S*H*, Cheers, WKRP in Cincinatti, The Rockford Files, Riptide, Dr. Who,… the list goes on.  But this isn’t about those songs.  This is about the worst – the worst of the worst.  Prepare to be amazed in the lamest manner imaginable.  Let the bad theme songs begin…

The show is so beloved and the theme such a part of the fabric of 70s pop culture that to rank it on a “worst list” sounds a lot like blasphemy. Yet, if you can somehow loosen the grip of nostalgia and judge it on its own merit, you’ll find this is one godawful, cheesy mess, not fit for even the smarmiest hotel lounge singer.

You’ll have to read our “Top 10 Sappiest Love Songs Ever Recorded” to find them any sappier than this. Johnny Mathis and Denise Williams lay on the schmaltz pretty thick with this one, and the “sha na na na” ending is like a giant dollop of Cheez-Wiz atop an already hopelessly cheesy intro.

Just as the lyrics claim, “Charles in Charge of our days and our nights”, this song will plague your every waking minute and haunt your dreams.

Ugh. There’s a fine line between loveably cheesy (ex. The Addams Family) and jarringly abrasive. This theme crosses that line then goes ten steps further into the mentally abusive category.

This one is so bad that I almost didn’t include it to spare you the pain. But then, in a moment of shameless self-pity, I decided to spread the torment. Misery loves company – what can I say?

A theme song befitting one of the most ridiculous, godawful TV train wrecks of all time. It sounds like a contemporary of The Patty Duke Show, yet it’s from the 1980s. Grating, cheesy, and utterly without melody, the Small Wonder theme is likely a punishment from the gods.

It’s so bad you half expect a laugh track at the end of it. Surely, this was all a big joke, right?

My only explanation for this is that the producers spent their entire theme song budget on cocaine. The Ropers theme is what loose change dredged from the cushions of an El Dorado will get you.

This theme is trying to be Broadway, but ends up sounding like your drunken great-aunt.

I thought the screeching All in the Family theme was the most eardrum shattering TV intro of all time… then I remembered Batgirl. Have your migraine medicine ready, folks. (For a similarly grating superhero theme, check out the long-forgotten Captain Nice – but don’t say you weren’t warned.)

My Mother the Car

Too often, shows from yesteryear attempted to explain the entire premise in their theme song. Sometimes it worked out okay (Gilligan’s Island, The Brady Bunch, The Beverly Hillbillies), but as with My Mother the Car, it often yielded cringeworthy results.