In 1967, US troops in Vietnam were equipped with the People Sniffer, a device designed to detect human scent. Sweating could get you killed in Vietnam. 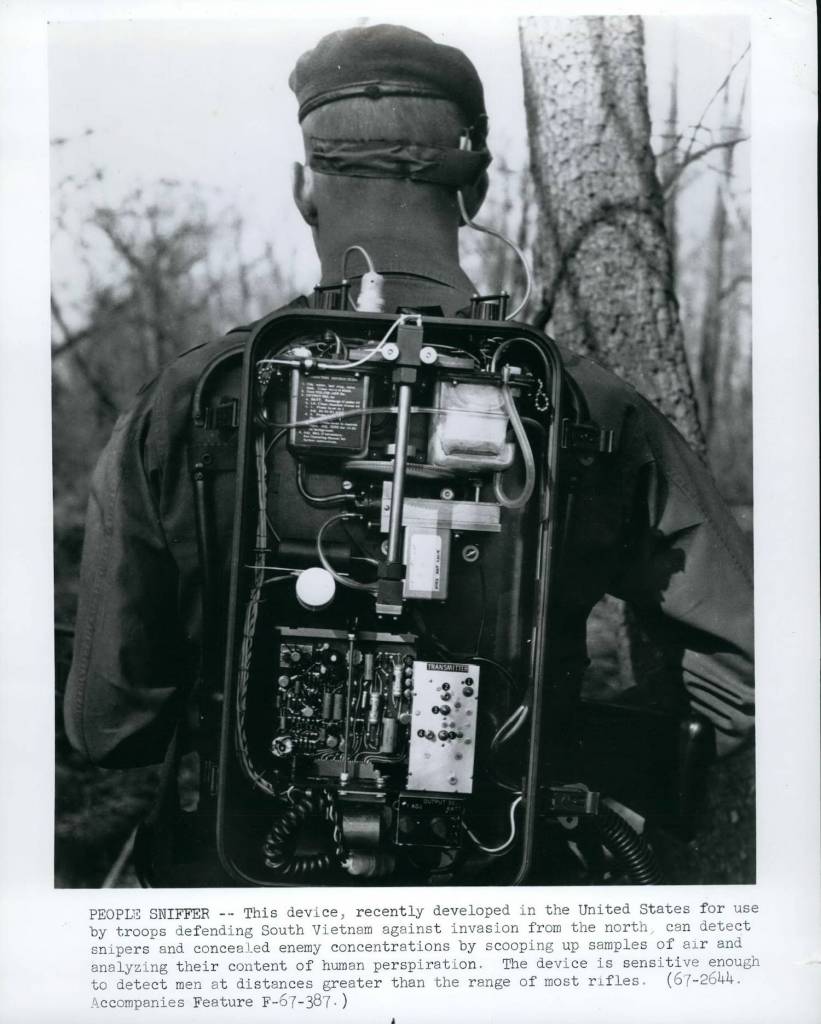 People Sniffer – This device recently developed in the United States for use by troops defending South Vietnam against invasion from the north can detect snipers and concealed enemy concentrations by scooping up samples of air and analyzing their content of human perspiration. The device is sensitive enough to detect men at distances greater than the range of most rifles.

The People Sniffer was developed by General Electric for the Army’s Chemical Corps. Incredibly there were problems with a device worn by jungle combatants that could sniff out sweaty people.

The XM-2 personnel detector manpack, also known as the E63 manpack personnel detector, was the first version of the people sniffer employed by the Army. The XM-2 featured a backpack mounted sensor with an air intake tube on the end of a rifle. The XM-2 was problematic in often detecting the soldier carrying it rather than the enemy. The device also made a distinct sound, easily detectable by the enemy.

On June 9, 1967, Time magazine hailed the invention that could win any game of hide and seek:

They all laughed when the U.S. Army introduced the “E63 Manpack Personnel Detector” for experimental use in Viet Nam. The device, a 24-lb. chemical and electronic version of a nose, was designed literally to smell the body odor of concealed enemy troops. Now the G.I.s—and presumably the Viet Cong, too—are more impressed than amused. The “People Sniffer,” as it is known in the field, has demonstrated that it can locate hidden enemy forces and has been ordered for dozens of U.S. infantry and artillery units. 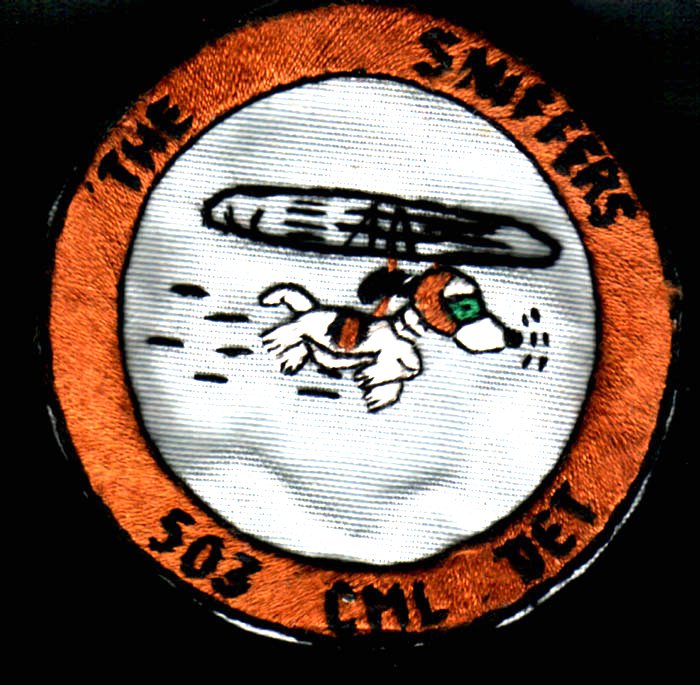 The Sniffers” pocket patch of the 503rd – The 503rd Chemical detachment was allocated to the 199th Infantry Brigade in 1966 and served with the Brigade in the III Corpr Tactical Zone of South Vietnam. The unit operated helicopter borne “people sniffer” apparatus; the sensitivity of the apparatus tuned mainly to detecting the ammonia released in human urine. Via

One veteran said it was useless on the ground, but when attached to a plane the People Sniffer, aka Snoopy, worked.

The first ADP equipment I worked with was actually designed to be carried on a soldier’s back in the jungle with a probe attached to his rifle. I never operated it this way. This tactic proved not to be very effective because air currents in the jungle are irregular. It was in fact very possible to smell your own troops using this tactic. It was also possible to walk right up to an enemy without detecting him due to uncooperative air currents. Plus the fact that it was an otherwise useless piece of equipment that the soldier had to tote made it a passing fad on the ground.

However, the air circulated through the jungle, but also rose to above the treetops, which offered a much better sample space. The tactics evolved to mounting the APD in a helicopter and flying just above the trees to collect and analyze the air samples. This proved to be much more effective and also allowed a flight of helicopters to follow up on the findings. 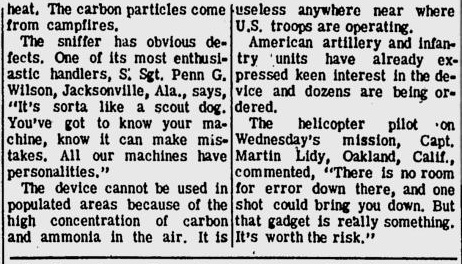 But other living things can be detected in the dense jungle:

In 2002, Peter Rogers told an interviewer about his experience flying over a tree containing “30 or 40” birds’ nests.

“We flew directly over it and as we went over it the operator said, ‘Mark 10,’ which is the maximum and I immediately radioed and said, ‘No, cancel that, we’ve just flown over a tree full of birds’ nests.’ Too late! It went into the books. The next day they put a B-52 strike on the tree.” 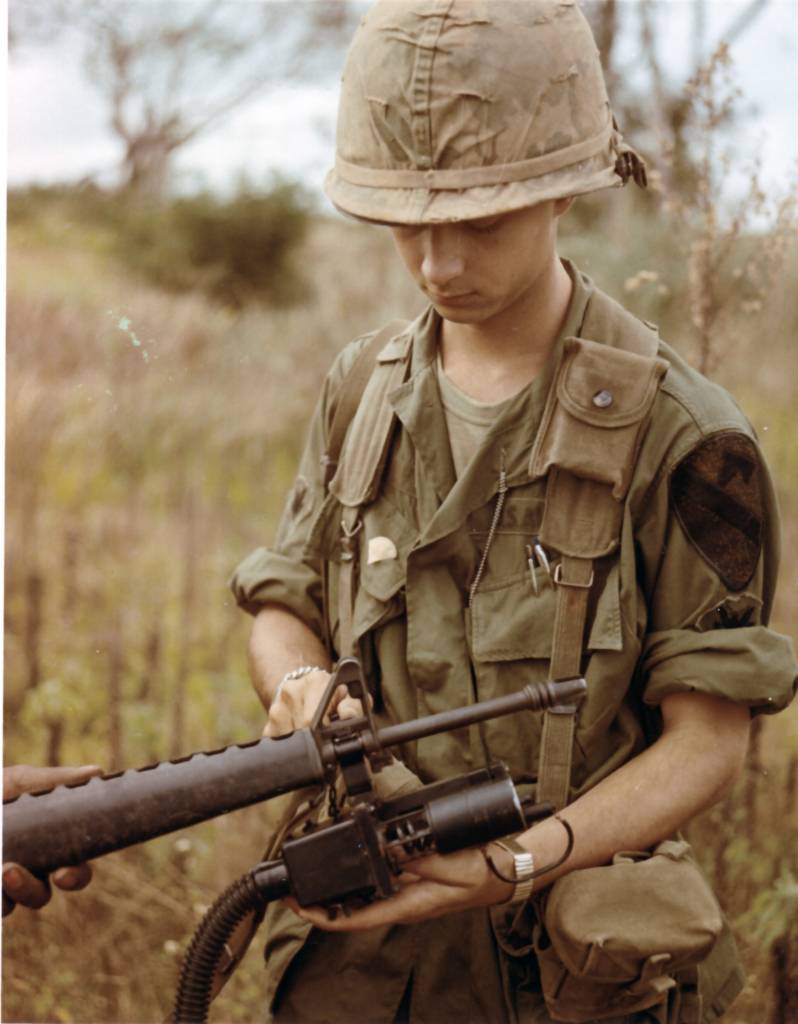 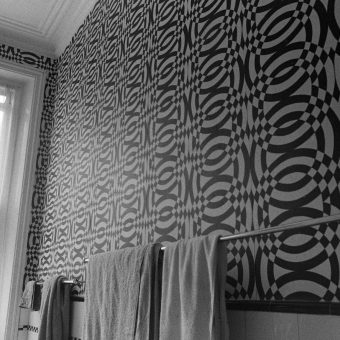