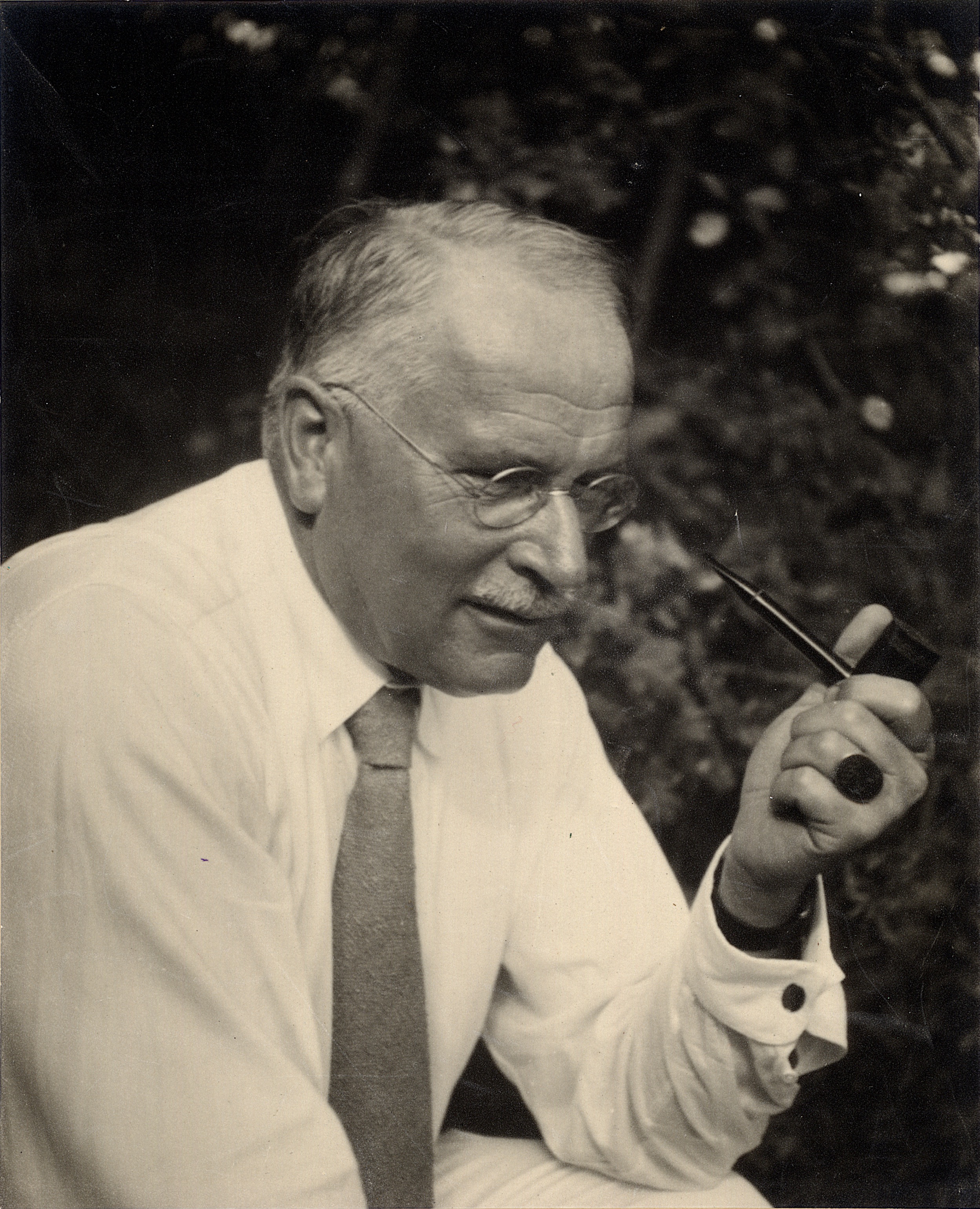 In 1959, Swiss psychotherapist Carl Jung (July 26, 1875 – June 6, 1961, Küsnacht) wrote Flying Saucers: A Modern Myth of Things Seen in the Skies. Jung used the book to explore links between the Cold War and fear of nuclear annihilation with an increased frequency of UFO sightings and tales of human encounters with extraterrestrials. Jung laid his idea out:

“In the threatening situation of the world today, when people are beginning to see that everything is at stake, the projection-creating fantasy soars beyond the realm of earthly organizations and powers into the heavens, into interstellar space, where the rulers of human fate, the gods, once had their abode in the planets…

Even people who would never have thought that a religious problem could be a serious matter that concerned them personally are beginning to ask themselves fundamental questions. Under these circumstances it would not be at all surprising if those sections of the community who ask themselves nothing were visited by ‘visions’, by a widespread myth seriously believed in by some and rejected as absurd by others.” 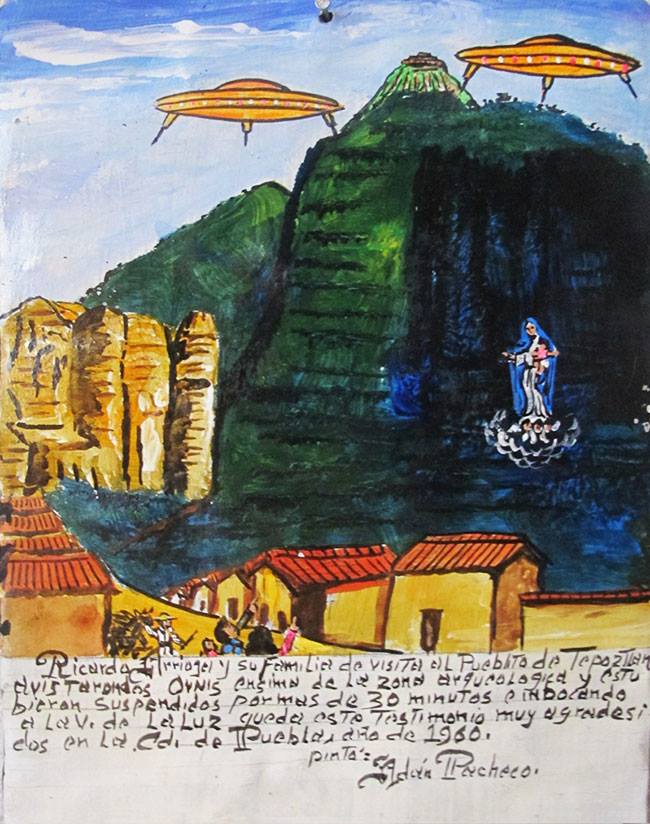 During their visit to Tepoztlán, Ricardo Arriaga and his family noticed two UFOs not far away from the archeological site. The UFOs were hanging in the air for more than 30 minutes before people started praying to the Virgin of the Light. This retablo is a testimony of what happened.
Puebla, 1960 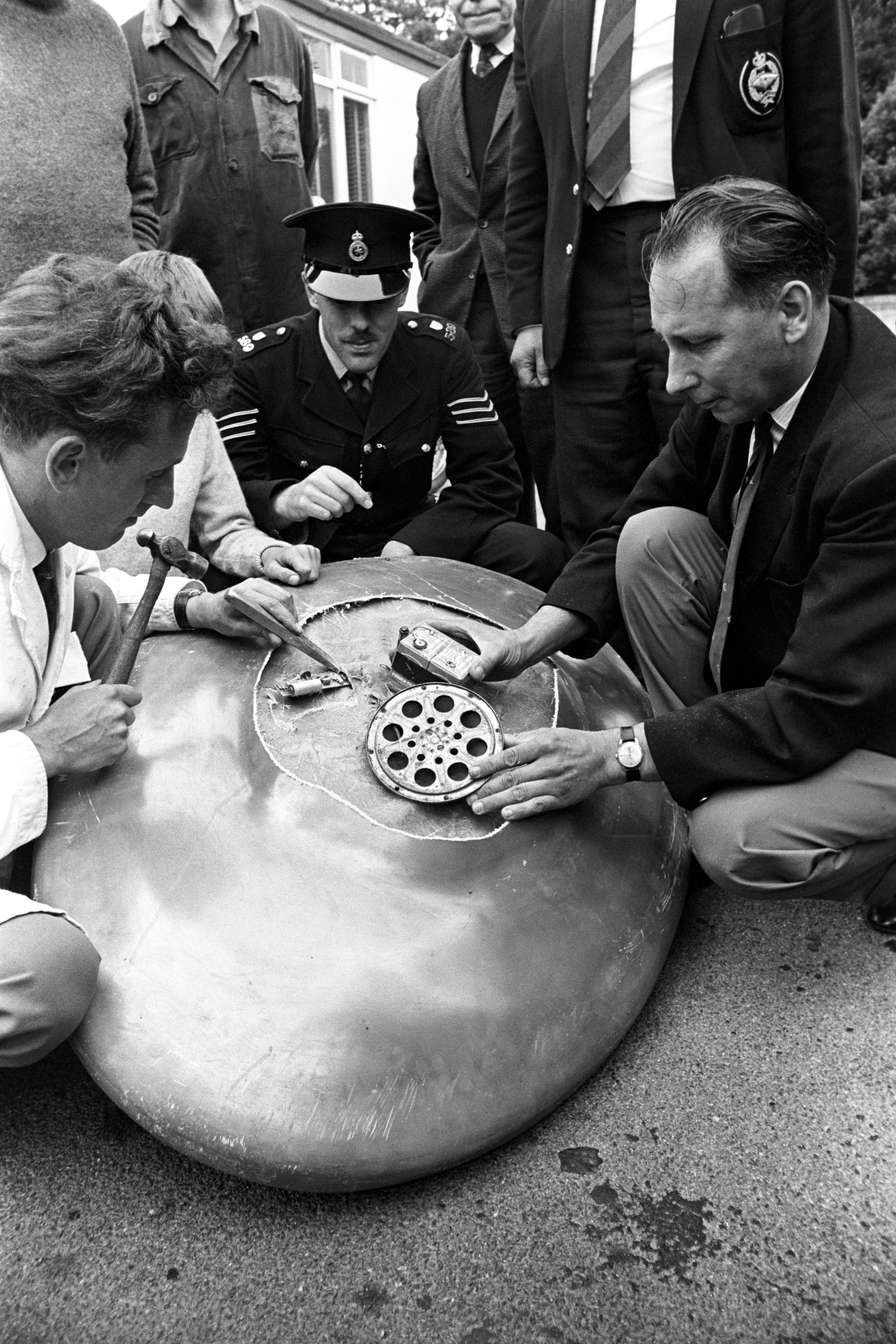 Engineer Reg Willard (left) chips away with a chisel as he dissects the bleep mechansim of the mystery object found at Clevedon, Somerset, England by. schoolboy. The object was one of five flying saucers found in different parts of the country. Inside the object Mr Willard found two Exide batteries, a British made transmitter and a loudspeaker. – More

Less interested in alien life and interstellar travel than their psychic aspect, Jung looked at the phenomena of increased UFO sightings in a period when humanity was threatened with extinction. To Jung, UFOs were “a modern myth”.

The primary question – and apparently this is the most important point – is this: are they real or are they mere fantasy products? This question is by no means settled yet. If they are real, exactly what are they? If they are fantasy, why should such a rumour exist? 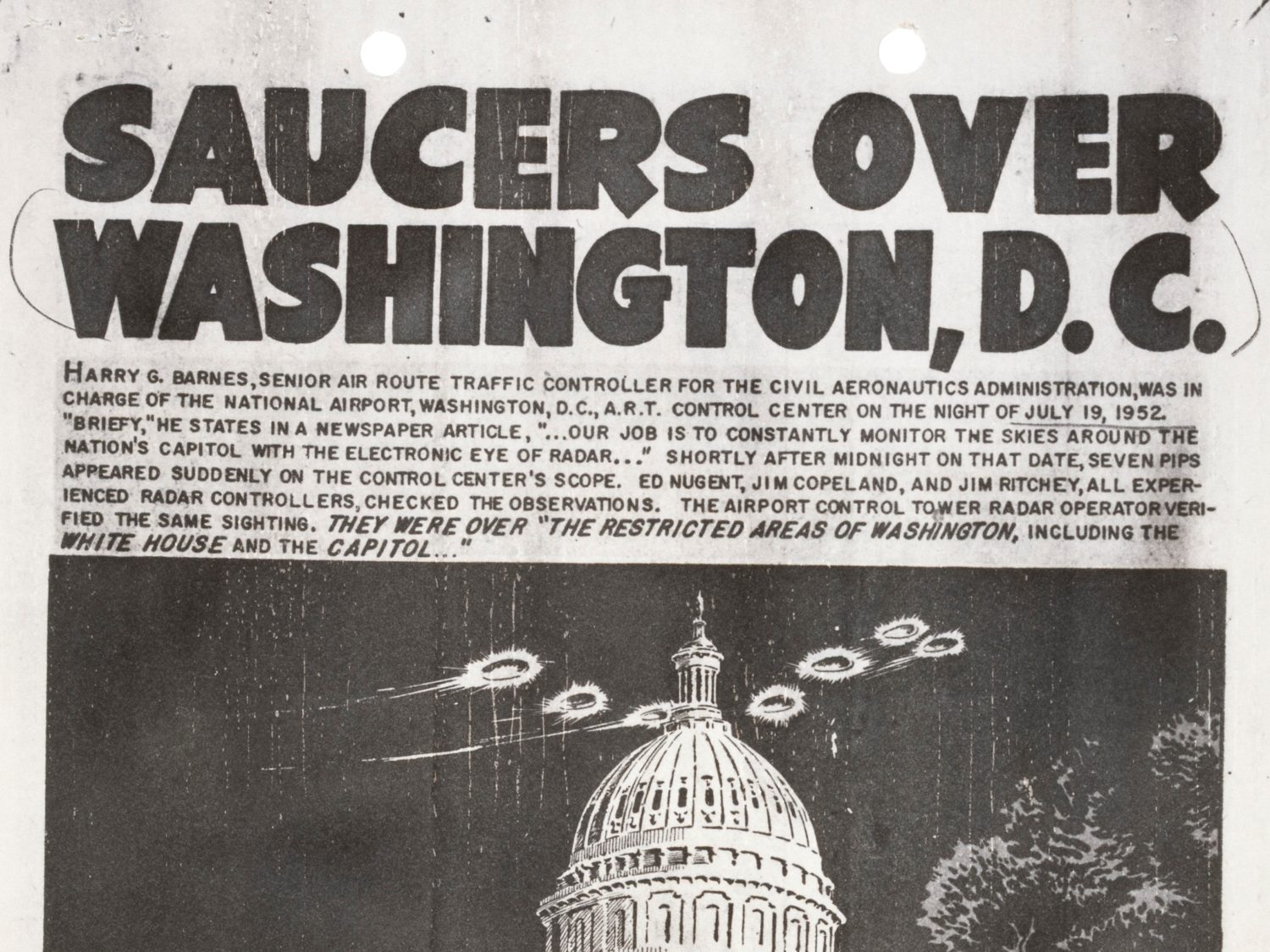 Jung linked scepticism in UFO sightings to the popularity of science fiction:

Since the things reported of UfOs not only sound incredible but seem to fly in the face of all our basic assumptions about the physical world, it is very natural that one’s first reaction should be the negative one of outright rejection. Surely, we say, it’s nothing but illusions, fantasies, and lies. People who report such stuff—chiefly airline pilots and ground staff – cannot be quite right in the head! What is worse, most of these stories come from America, the land of superlatives and of science fiction.

Though the Ufos were first publicized only towards the end of the Second World War, the phenomenon itself was known long before. It was observed in the first half of this century, and was described in earlier centuries and perhaps even in antiquity.

In 214 BC, ancient historian Livy reported phantom ships in the skies of Rome.

Keen to get Jung’s views to his readers, New Republic editor Gilbert A. Harrison invited a contribution from the man Sigmund Freud once called his “adopted eldest son, his crown prince and successor”. Jung’s reply is worth reading: 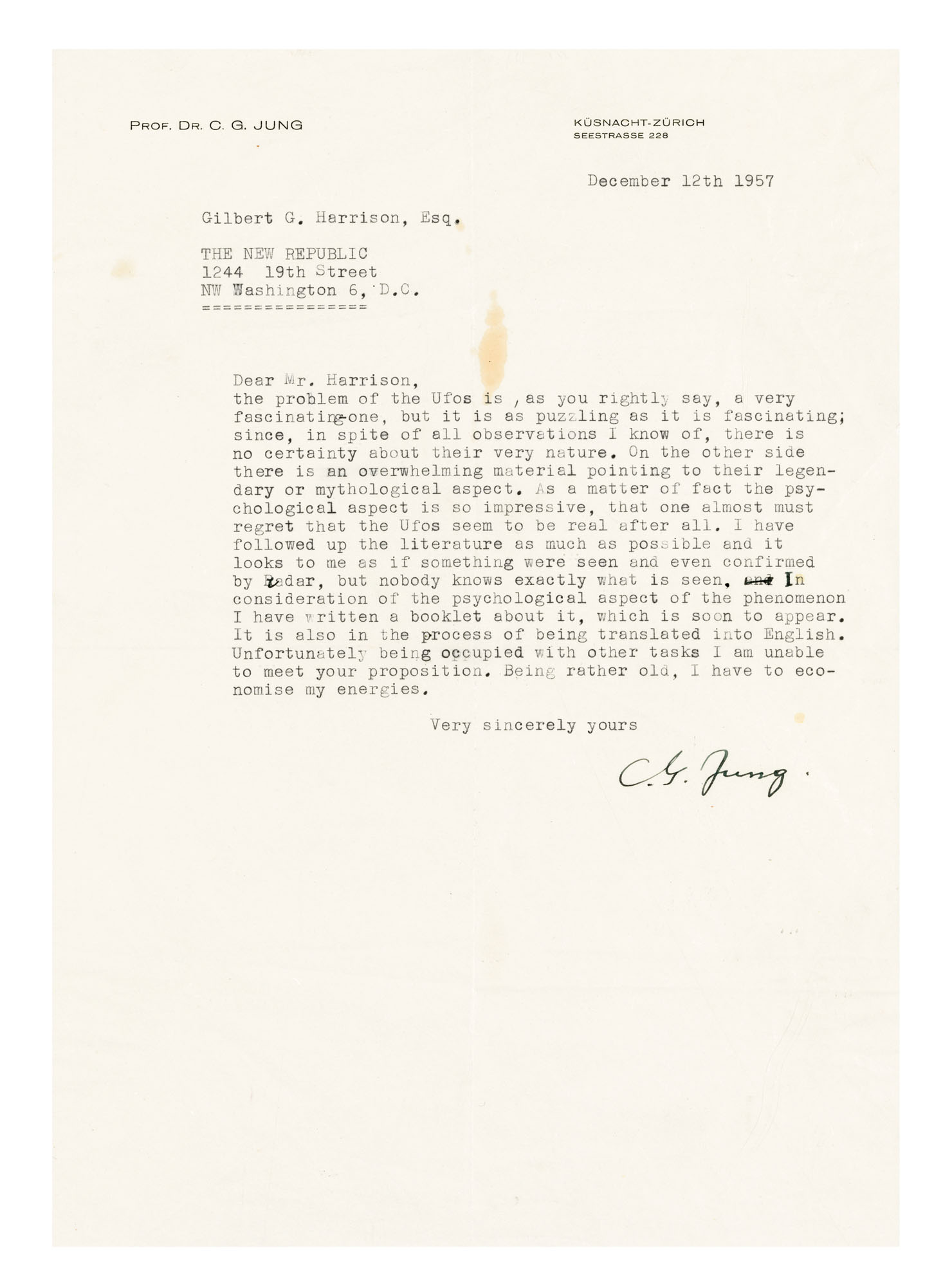 the problem of the Ufos is, as you rightly say, a very fascinating one, but it is as puzzling as it is fascinating; since, in spite of all observations I know of, there is no certainty about their very nature. On the other side, there is an overwhelming material pointing to their legendary or mythological aspect. As a matter of fact the psychological aspect is so impressive, that one almost must regret that the Ufos seem to be real after all. I have followed up the literature as much as possible and it looks to me as if something were seen and even confirmed by radar, but nobody knows exactly what is seen. In consideration of the psychological aspect of the phenomenon I have written a booklet about it, which is soon to appear. It is also in the process of being translated into English. Unfortunately being occupied with other tasks I am unable to meet your proposition. Being rather old, I have to economize my energies.

Are aliens out there? Do you favour the response ‘why’ or ‘why not’? And can sightings be attributed, as Jung notes, to the fear of the unknown, and with it, the human preoccupation with aliens, on our innate search for meaning in places where none exists?

Let’s end with this. In 2010, psychologist Stephen Diamond described the mental phenomenon of seeing ands dreaming of UFOs:

…it is precisely the profoundly mysterious and mythic nature of UFO’s that, like dreams, makes them so psychologically powerful. As with all natural or metaphysical phenomena, once science dissects, analyzes and mechanistically explains such mysteries, their numinous, spiritual, potentially healing power is deadened or lost. 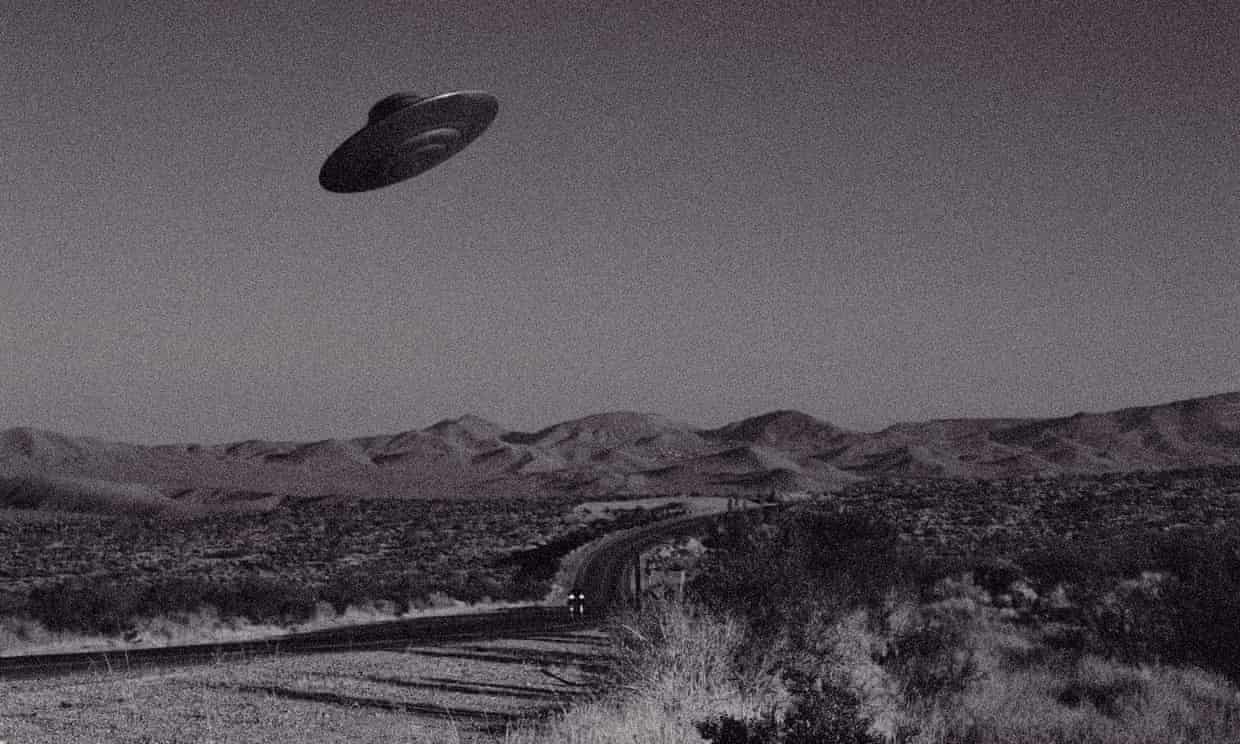 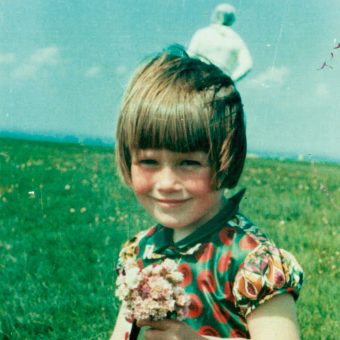 Secrets of The UFO Files: National Archive Finally Reveals What We Saw In The Skies Over Britain 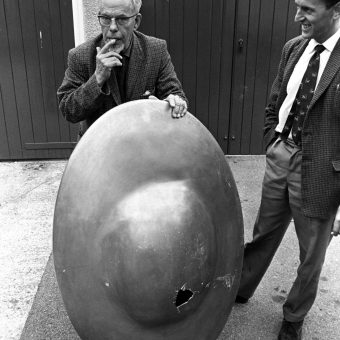 In The 1960s The ‘Warminster Thing’ And UFOs Terrorised Wiltshire 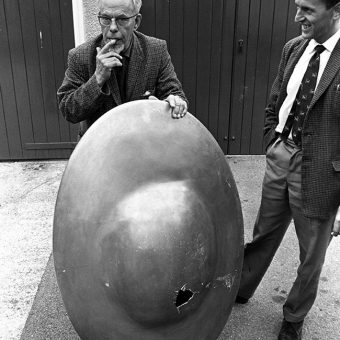