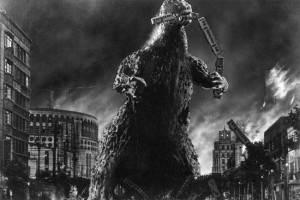 GARETH Edwards’ Godzilla opens this week in theaters, and the question remains: will the new film assume its place among the classics of the giant monster movie genre, or falter badly instead, much like the 1998 version of the same material directed by Roland Emmerich?

Perhaps the answer to that question will only be answered by the passage of time. How will the new Godzilla age, given advances in special effects?  Will the film’s central metaphor about Godzilla and nature prove as sturdy as the original Godzilla’s (1954) anti-nuclear message?

With such questions in mind, I would suggest that the following five films deserve consideration as being among the greatest giant monster movies of all time:

Gareth Edwards’ first monster film is a low-budget one that utilizes its giant creatures quite sparingly. However, when the alien monsters finally do appear, the effect is more than satisfying.

In fact, there is so much build-up leading to their appearance that the monsters’ single significant scene carries considerable impact…only not in the way you might expect.  All the government-sponsored propaganda in the movie’s story about the monsters suggests something truly dreadful.  Yet what we witness close-up, instead, is a surprising sense of tenderness.

Monsters masterfully blends the travelogue aspect of Babel (2006) with the intimate human relationship of Before Sunrise (1995), and then adds giant monsters to the mix.  The story takes place several years in the future when monsters from space have taken up residence on the Mexico/United States border.  A war photographer, Andrew (Scoot McNairy) hoping to snap a picture of a dead child (which pays 50,000 dollars in the U.S) is tasked with recovering his boss’s wayward adult daughter, Samantha (Whitney Able) and bringing her home.

Very soon, this unlike duo is alone, on foot, navigating the monster “Infected Zone” and re-considering individual life choices.

Monsters offers some non-preachy commentary about illegal immigration, as well as about the human vultures who make money off the misery of those hoping to make a better life for themselves.  But Monsters is really about the most valuable thing in the universe: the meaningful connection between two lonely beings.  Edwards’ cleverly draws a parallel between the monsters and the humans in this regard, and the film might just be the greatest monster love story of all time because of the thoughtful approach.

Monster or human, we’re all just looking for that one somebody special… 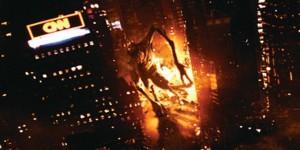 This 2008 found-footage giant monster movie from producer J.J. Abrams and director Matt Reeves re-invents the sturdy genre by presenting a tale shot almost entirely from street level.  The movie’s action is caught on the fly by panicked survivors (using a digital video camera) as they endure an attack in Manhattan by something colossal, alien, and pissed-off.

In Cloverfield, a group of young adults — including a new romantic couple, Rob (Michael Stahl-David) and Beth (Odette Yustman) — contend with normal daily life as usual.  But then, on the eve of Rob’s departure for Japan, everything changes.  The city is attacked, and before long, it is an all-out battle for survival on (and under…) the city streets.  The monster is almost never seen in its full-proportions, thus reflecting the ground’s eye viewpoint of the victims.

Lensed in immediacy-provoking, first-person unsteady-cam, Cloverfield determinedly reflects the chaos and madness of a day like September 11, 2001, when, out-of-the-blue, everything suddenly changes.  The film also finds an abundantly clever way to develop its characters, people who are trapped in the heat of the crisis and therefore can’t reveal themselves fully to the audience.

Because we are reviewing, a recording, essentially, recovered by the U.S. Government, we occasionally see  “blips” of (apparently) unrelated footage of Rob and Beth’s romantic outing to Coney Island the previous day.  So between moments of fevered intensity and monster attacks, the film provides these little grace notes of human interaction and contact.  Encoded in these happier moments too, is the arrival — unnoticed — of the monster, by meteor.

By presenting its story of a giant monster in found-footage format, and by rigorously maintaining the limits of “street level” knowledge, Cloverfield re-built the giant movie monster film for a new age. And its “ghost” imagery of days past at Coney Island remind us to seize the day, for tomorrow a giant monster might lay waste to our cities. 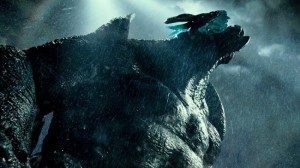 For many long-time monster movie fans, this impressive Guillermo Del Toro effort felt a bit like a dry-run for a new, state-of-the-art Godzilla film.  Pacific Rim reveals, in detail, that Hollywood’s special visual effects have now reached a point where giant monsters can be presented on-screen without old tricks like stop-motion photography of “suit-mation.”

In this film, monsters from a dimensional rift at the bottom of the Pacific Ocean — called Kaiju — rise to decimate man’s civilization, and the beasts look remarkably real, and also distinctive.  Like the best monsters in the Godzilla canon, Pacific Rim’s Kaiju are both fearsome and easily recognizable.

But Pacific Rim goes one step further too by pitting these giant monsters against giant robots (a factor in Godzilla films as well, with the development of such giant machines as Kiryu and M.O.G.U.E.R.A.). The movie’s conflict involves the fact that the human-made machines, Jaegers, require the total cooperation and coordination of two humans if they are to function adequately in battle.

One mind alone can’t control the giant robot, but two minds offer the opportunity not only for success, but for chaos and disunity if total synchronization isn’t achieved.

Del Toro plays dramatically with this theme of “two as one,” and uses the leitmotif of a pair of shoes — and one missing shoe, in particular — to express the human desire to be “whole.”  The film also explores how wholeness, for us, means connection to someone special.  Controlled by two, the Jaegars also prove a strong contrast to the Kaiju, who are clones, thus a single being repeated again and again… 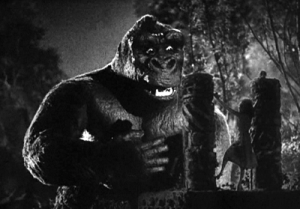 At the despairing depth of the Great Depression came the greatest American monster of them all: King Kong. This giant, love-struck gorilla was an explicit reminder to audiences of the day in “The First World” that there were things as yet unseen and unknown in the world, and that staid, failing modernity had not yet used everything all up.

Remade in 1976 and 2005, the original King Kong remains a thrilling “safari” to the Third World, and a reminder that not everything on Earth is yet known or quantified.  Many critics have read all kinds of deep metaphors and allegories into the original King Kong.  On one hand, it could be considered a reflexive look at filmmaking and the need of filmmakers to constantly offer new (even dangerous…) bread and circuses to the masses.

On the other hand, no less a voice than Quentin Tarantino has suggested that Kong’s journey from Skull Island to New York City serves as a metaphor for slavery, and the black man’s journey to America.

In whatever way one chooses to parse the classic giant monster film, it is certain that King Kong inspired a generation of special effects artists with its brilliant stop-motion photography.  The epic fantasy has thrilled movie audiences since it first played to packed movie houses, and today is still brilliantly-paced and executed. 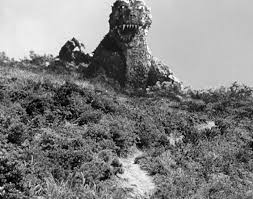 All-right, so this is the second time this week that Ishiro Honda’s Godzilla has topped a “best” list that I’ve written here.

But the fact of the matter is that sixty years later, the film remains incredibly impressive for a variety of reasons.

First, the film’s documentary-like approach (and black-and-white photography) lends it a powerful and raw sense of realism that many other monster films have decidedly lacked.  Although the film’s actors and characters are appealing, director Ishiro Honda’s choice to follow the story from one civic meeting to another, essentially, results in an even more enhanced sense of verisimilitude.

Furthermore, the scenes of Japanese cities on fire — and casualties being rushed about on stretcher — inevitably recall the horrible real-life bombings of Nagasaki and Hiroshima. Although a monster film, Godzilla grapples with these real life terrors meaningfully, and with the anxiety at the beginning of the Nuclear Age.  Were we going to destroy each other, and perhaps ourselves, just because we couldn’t get along?  Just because we believed different things than our “enemy” did?

Godzilla suggests the way out of such useless self-annihilation: a sense of personal responsibility on the part of scientists who bring us new weapons of destruction.  The film’s subplot involving Dr. Serizawa, creator of the Oxygen Destroyer, suggests the need for a strong, personal moral compass in the new age of technology.

The fearsome Godzilla himself is an avatar, in the film, for nuclear fears.  He is nuclear terror out-of-control and run amok, a sign of what happens when the aforementioned moral compass of man is found lacking.

In addition to all these artistic virtues, the original Godzilla is also the most influential monster movie of all time because it initiated a film franchise of over two dozen films, two American remakes, and knock-offs including Great Britain’s Gorgo (1961).

The times and technologies have changed since 1954, but the Godzilla movie template is still in place, and still giving the world new monsters that represent man’s darkest impulses.