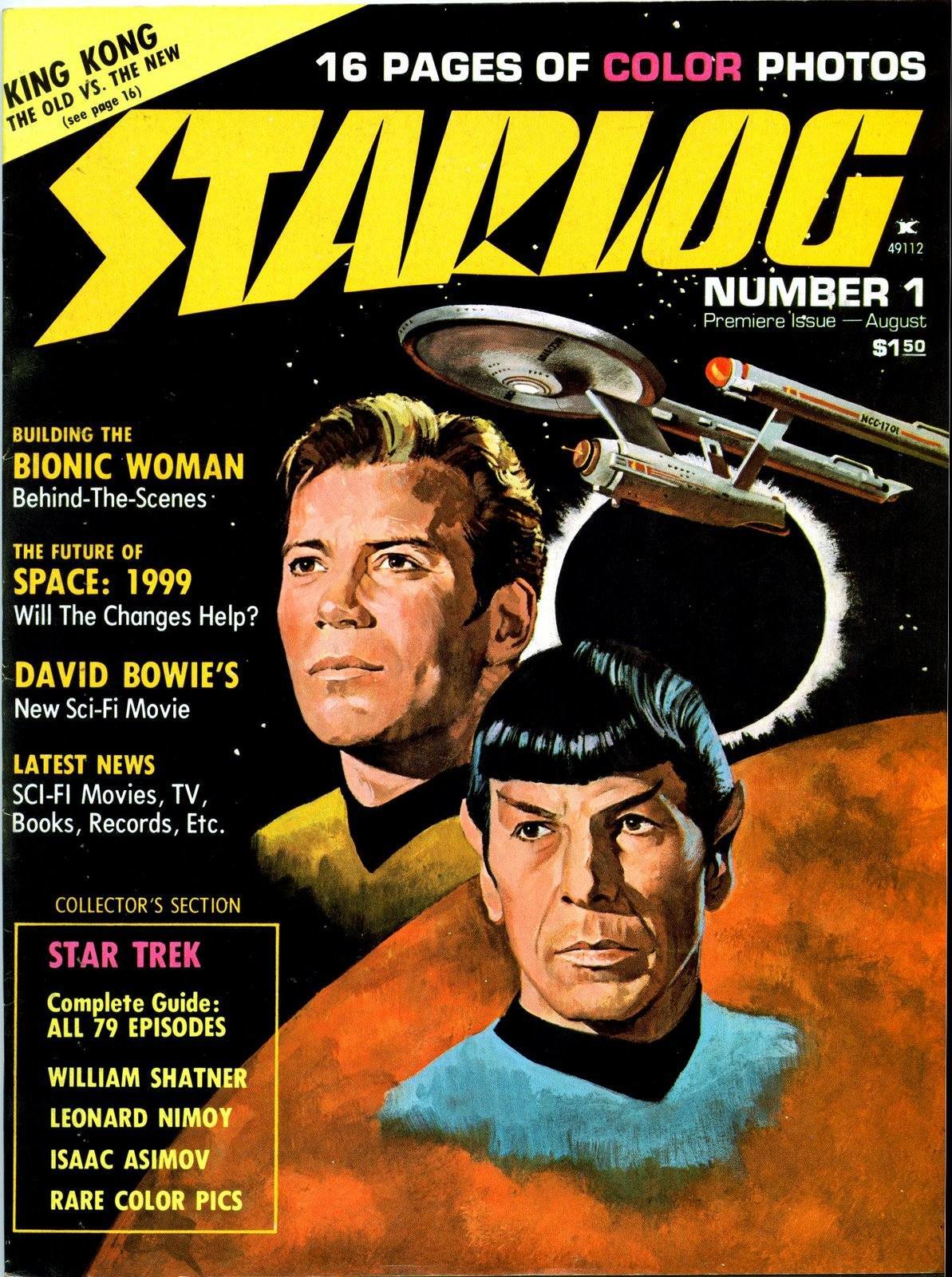 Before the Internet Age, sci-fi geeks had to get their information about upcoming genre entertainment the old fashioned way: from print magazines, sold at the local newsstand, or delivered to your mail-box via monthly subscription.

From 1976 to 2009 – more than three decades — Starlog Magazine reported extensively on the world of science fiction television, movies, and literature. The mag featured columns by “The Trouble with Tribbles” author David Gerrold (first “State of the Art,” then “Rumblings,” and then “Soaring.”)  Starlog also featured David Hirsch’s detailed and informative updates about the world of Gerry Anderson (“Space Report,”) in particular, behind-the-scenes information on Space: 1999 (1975 – 1977).  And the magazine featured movie and TV retrospectives from the likes of great writers such as Lee Goldberg and Jean-Marc Lofficier, and interviews from the meticulous film scholar, Tom Weaver.

As a kid who grew up in the seventies and eighties, I remember the rush of discovering a new issue of Starlog, whether at a vendor location (mine was at the Englishtown Flea Market in N.J.), or in the mail at home.  It was always a thrill to see the cover of the magazine, and find out — at a glance – what magical genre entertainments were impending.

With that thought in mind, here are five of my selections for the best Starlog Magazine covers from the span 1976 – 2009, as well as those for the three worst.

In some ways, the very first issue of Starlog also features the best cover.  It’s a beautiful painting of the critical elements of Star Trek (1966 – 1969): the U.S.S. Enterprise, Captain Kirk, Mr. Spock, and the stars themselves. The cover does a great job of expressing the essence of the Gene Roddenberry phenomenon. 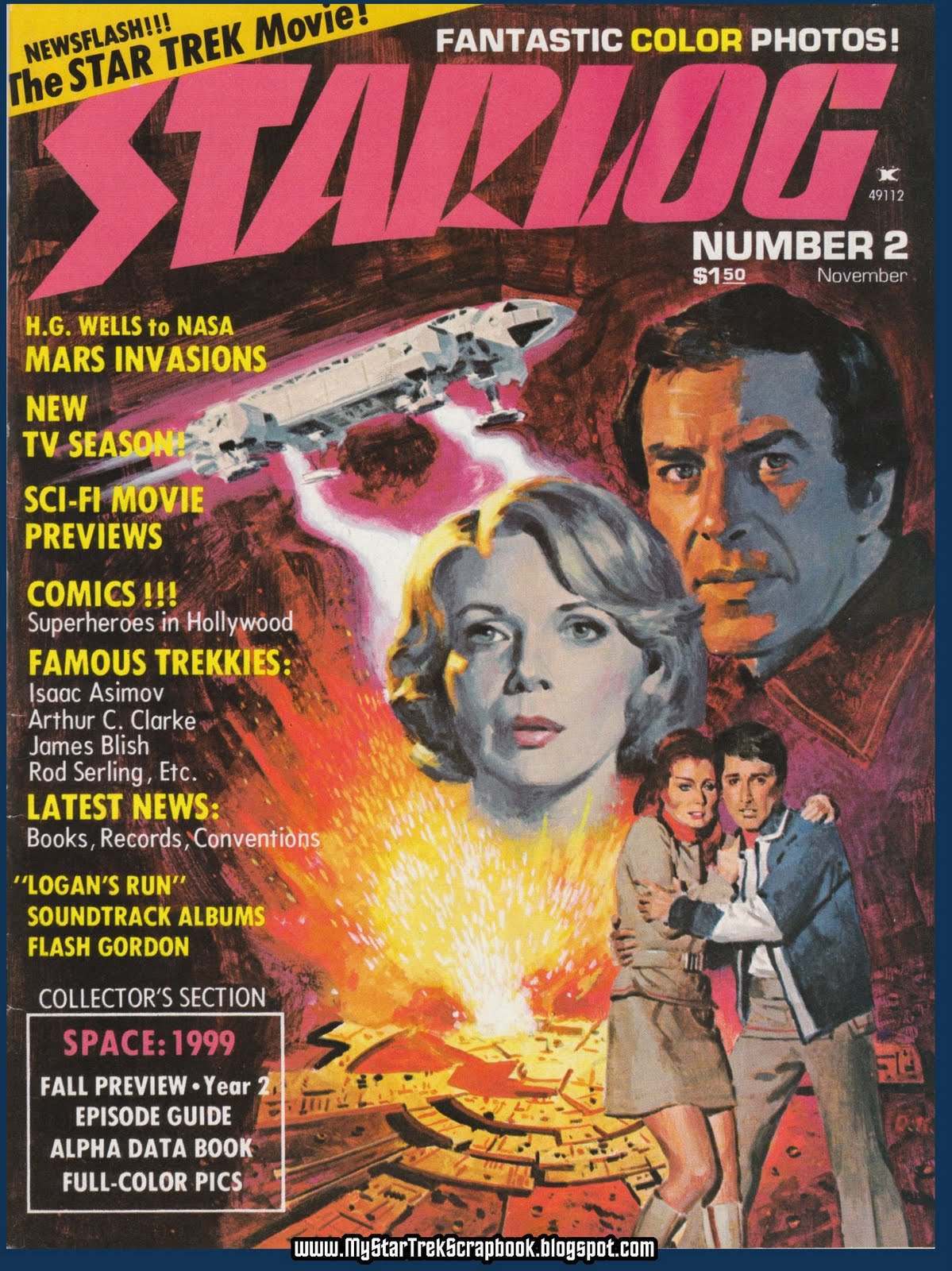 In terms of personal favorites, this one actually tops my list. Issue #2 features an artistic rendering of elements from Year Two of Space: 1999 (1975 – 1977), and seems to conform to that season’s focus on color, action and excitement.  It would have been easy to do another “outer space” cover with a black backdrop — just like Issue #1 — but instead, this cover art by Dick Kohfield goes in a different direction, with a coral or rose background (that blends in with Commander Koenig’s [Martin Landau’s] new jacket).  The imagery introduces us to Catherine Schell’s Maya, features the series’ trademark Eagle, and the Anderson trademark of incredible explosions, realistically rendered. 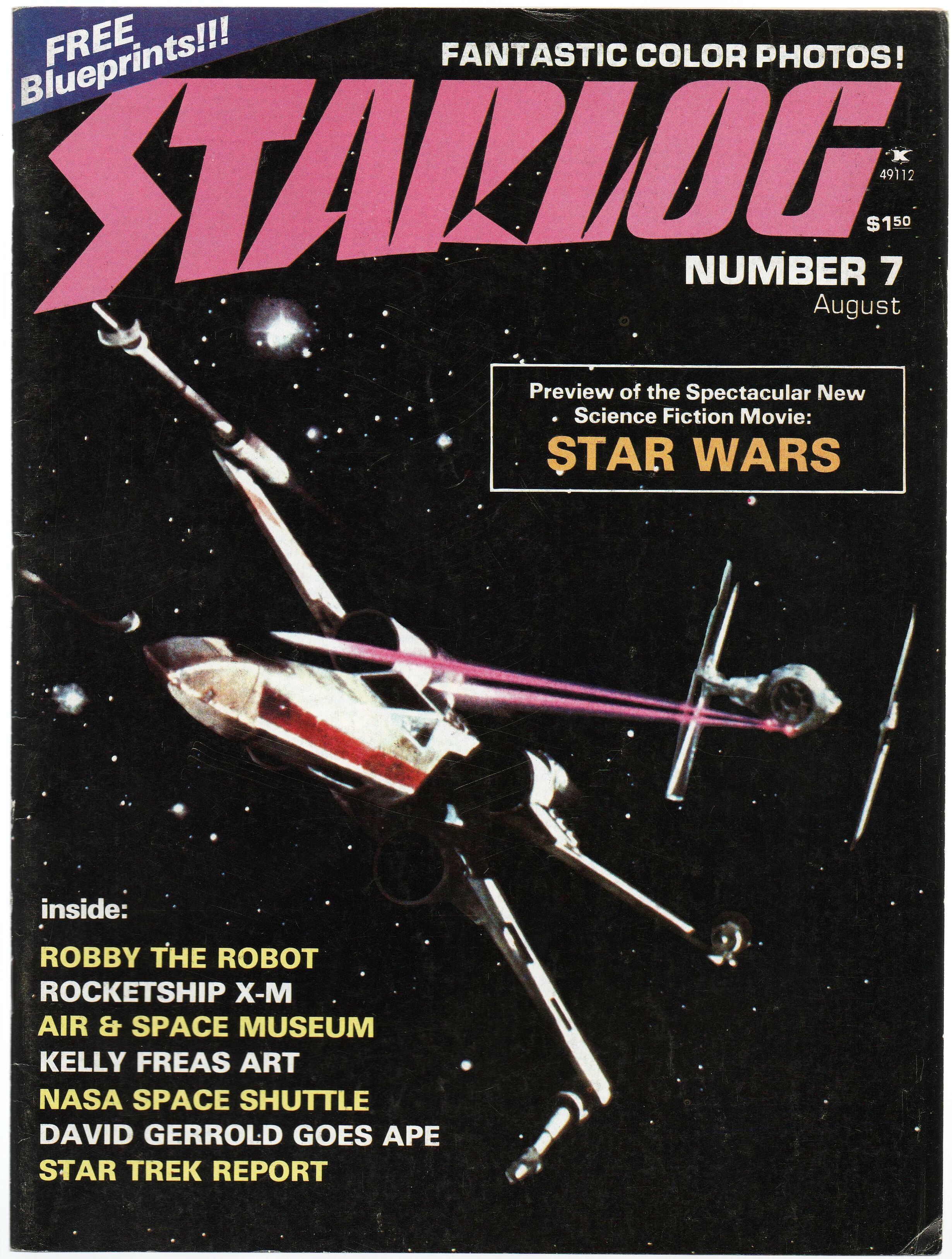 A year into Starlog’s run, a little film called Star Wars graced the cover. This cover illustration is a photograph, not a painting, obviously, and identical to art one can find on a Star Wars trading card or lunchbox from the same time period.  And yet the oft-seen image — of a TIE Fighter firing at an X-Wing fighter (its wings in deployed mode…) — nonetheless captures the simplicity and magic of the swashbuckling Lucas film. 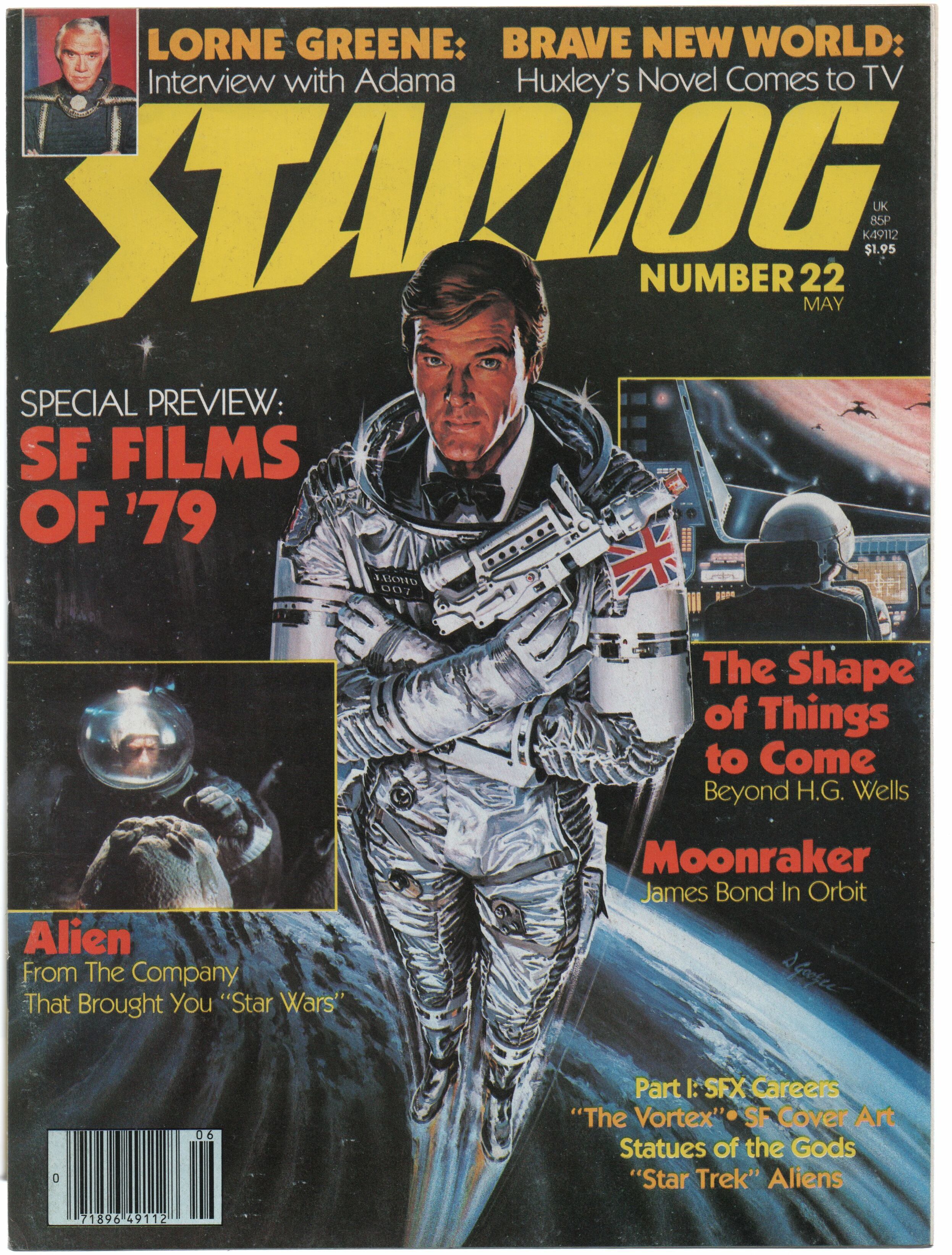 Roger Moore as 007 — James Bond in Moonraker (1979) — graces the cover of this Starlog issue, which gazes deeply at the sci-fi blockbusters of the final year of the seventies. The cover art works so splendidly in part because the central image of Bond, blasting into orbit in his silver space suit (and tux…), captures the intent of the issue as a whole.  Thanks to Star Wars, sci-fi filmmaking was blasting off at a dramatically accelerated rate in 1978 – 1979.  The sky was no longer the limit, and this cover image captures that idea beautifully. 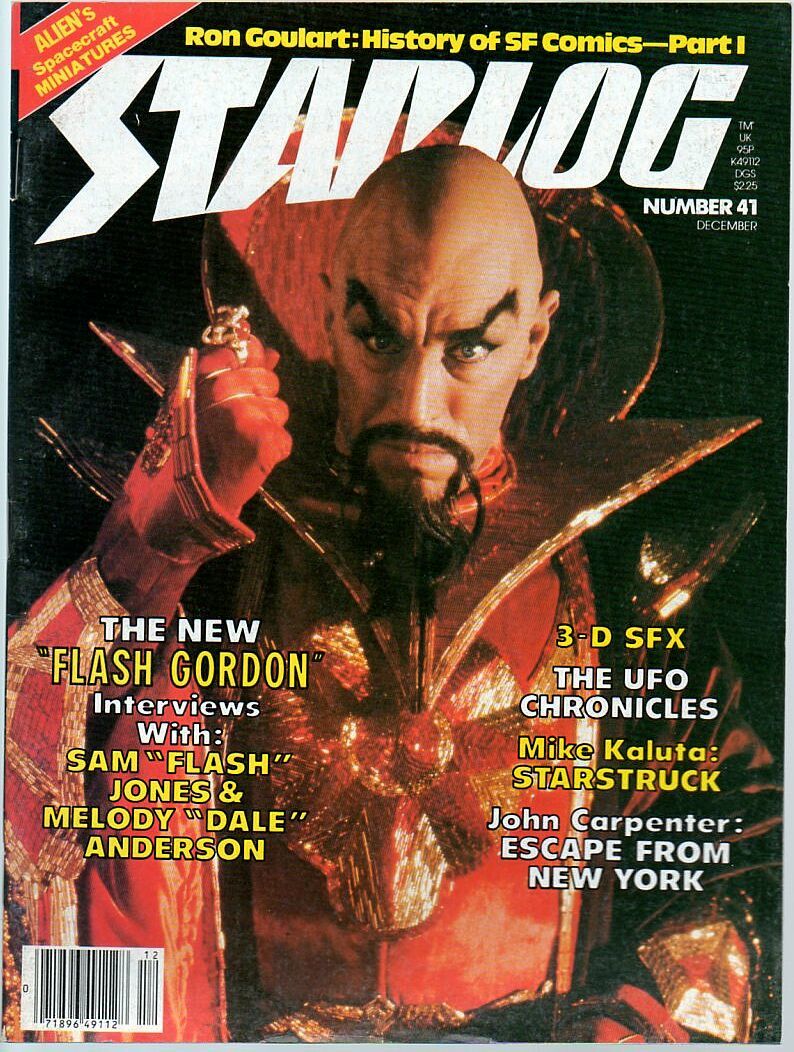 Flash Gordon (1980) was the film of my eleventh birthday, so I still admire this portrait of Max Von Sydow’s opulent and evil Ming the Merciless.  I was consumed with all things Flash Gordon during 1980 remember seeing the movie and tearing through this issue, which features interviews and articles about the making of the Dino De Laurentiis epic.  Most of the other titles on this list feature heroes or montages of heroes in their outer space environment, but it’s nice, every once in a while, to get a good luck at a bad guy, and there are none badder than Ming!

And the three worst: 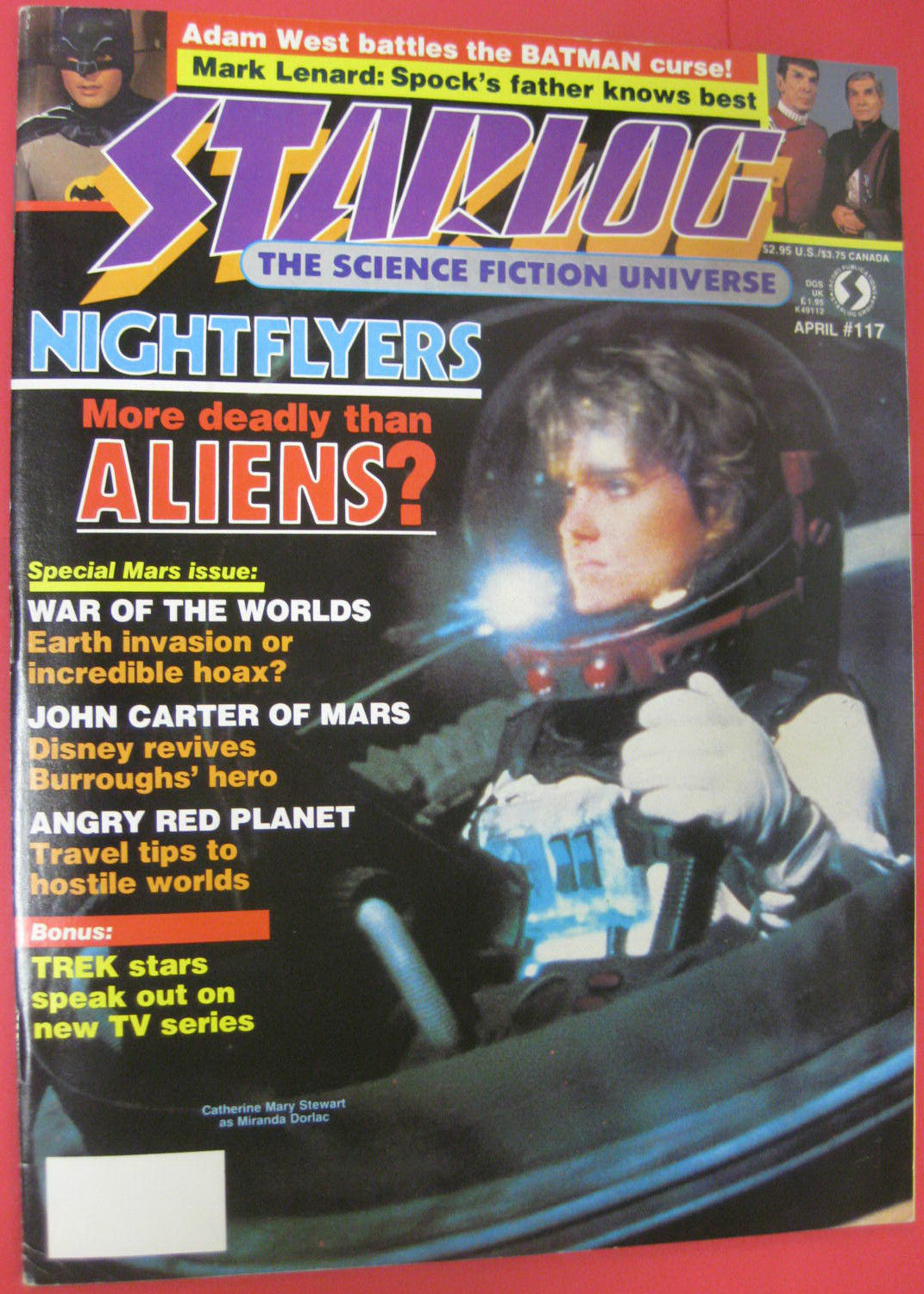 We all remembers Nightflyers (1987), right? Although the film about a haunted spaceship starred the wonderful Catherine Mary Stewart and forecast such space horror as Event Horizon (1997), the low-budget movie isn’t exactly cover worthy.  The imagery of the space-suited Stewart in a bubble helmet is clunky and reminiscent of 50s sci-fi. It’s also a good indicator that the movie featured was not going to be cutting-edge, or inventive. 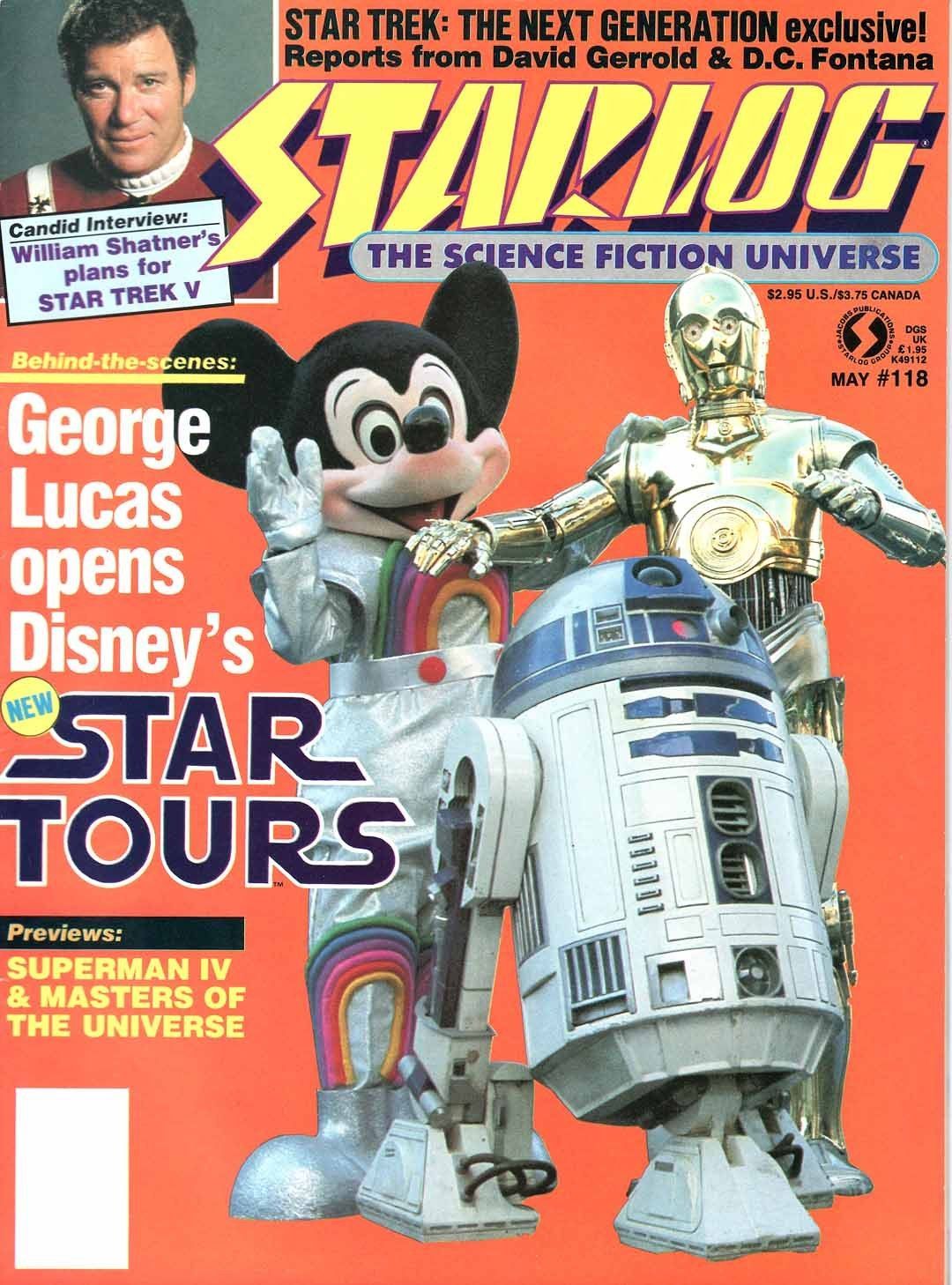 Listen, I love Mickey Mouse as much as the next guy, but I just don’t want to see him on the cover of Starlog hawking the Disney attraction “Star Tours.”  In 1987, science fiction geeks had enough problems with the genre being termed “Mickey Mouse” by naysayers without the Disney mascot gracing a cover for the standard-bearer for the industry.  So yeah, 1987 wasn’t such a good year for Starlog covers. 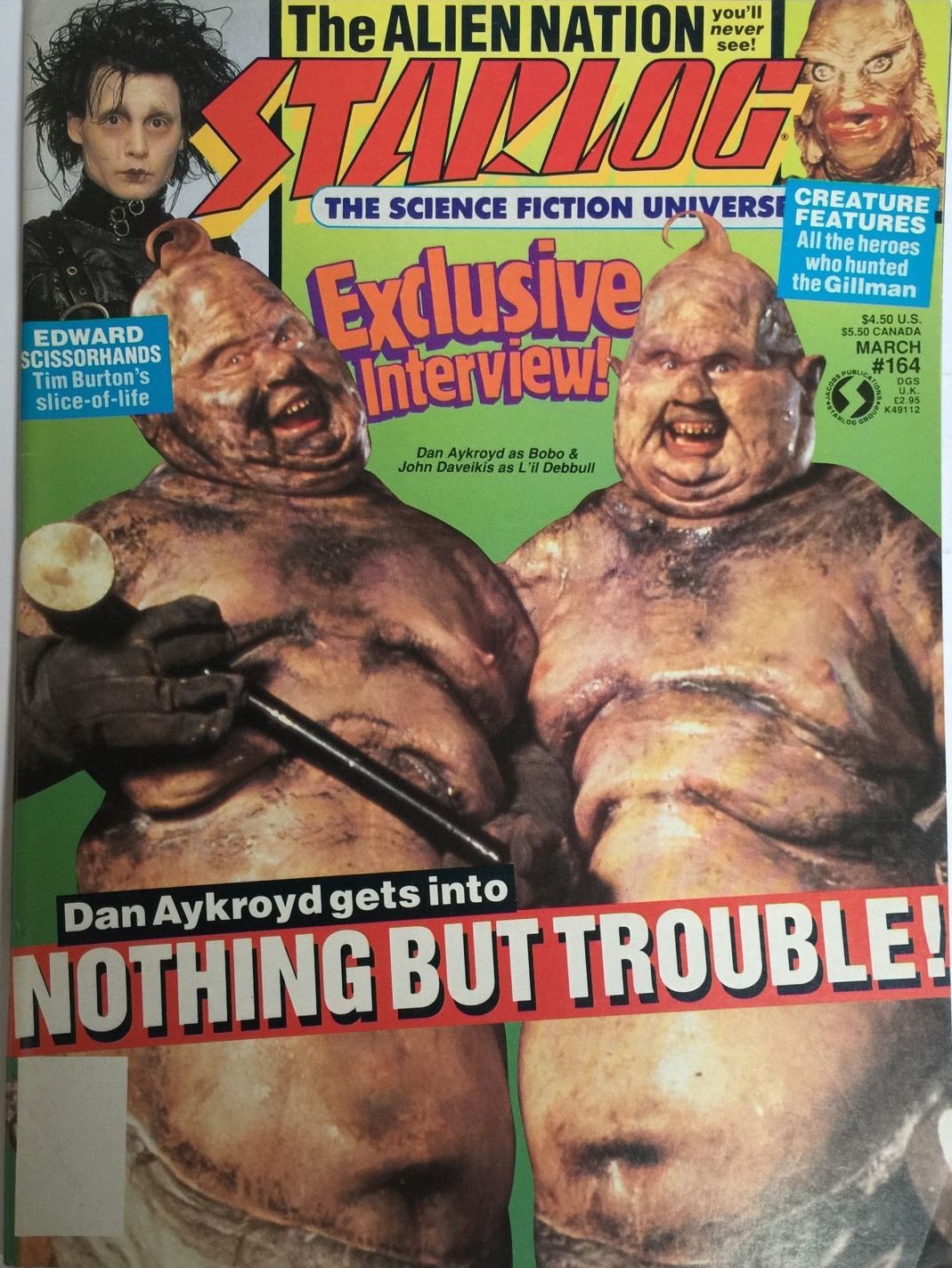 The Chevy Chase, Dan Aykroyd fantasy comedy Nothing but Trouble (1991) is the subject of the cover this month.  The movie was a bomb, but I saw it in college and rather enjoyed it.  This cover, however?  Fat flabby, bald monsters with bad teeth, set against a slime green background?

That’s why I read Starlog!

Actually, Starlog was going through a horrendous design phase (from 1987 – 1992, perhaps) in which its covers featured single figures (Michael Keaton’s Batman, Denise Crosby’s Tasha Yar, or Timothy Dalton’s James Bond) cut-out, plastered against garish, brightly-colored backgrounds like the one seen here.  It wasn’t an attractive look, but the distasteful, unattractive nature of these characters from Nothing but Trouble makes the magazine look even more repellent.