Vintage cologne and aftershave advertising consisted of two elements: (1) manly superstuds, the hairier the better and/or (2) the women who can’t resist them.  It’s as if the fragrance is a pheromone,  propelling women to involuntarily thrust themselves upon the male wearer.  Sure, these ads haven’t changed much – they still promise a lifetime of easy promiscuity.  But, as with essentially all advertising, it was a lot simpler, more straightforward…. and a helluva lot of fun to look at.  So, let’s dive in… 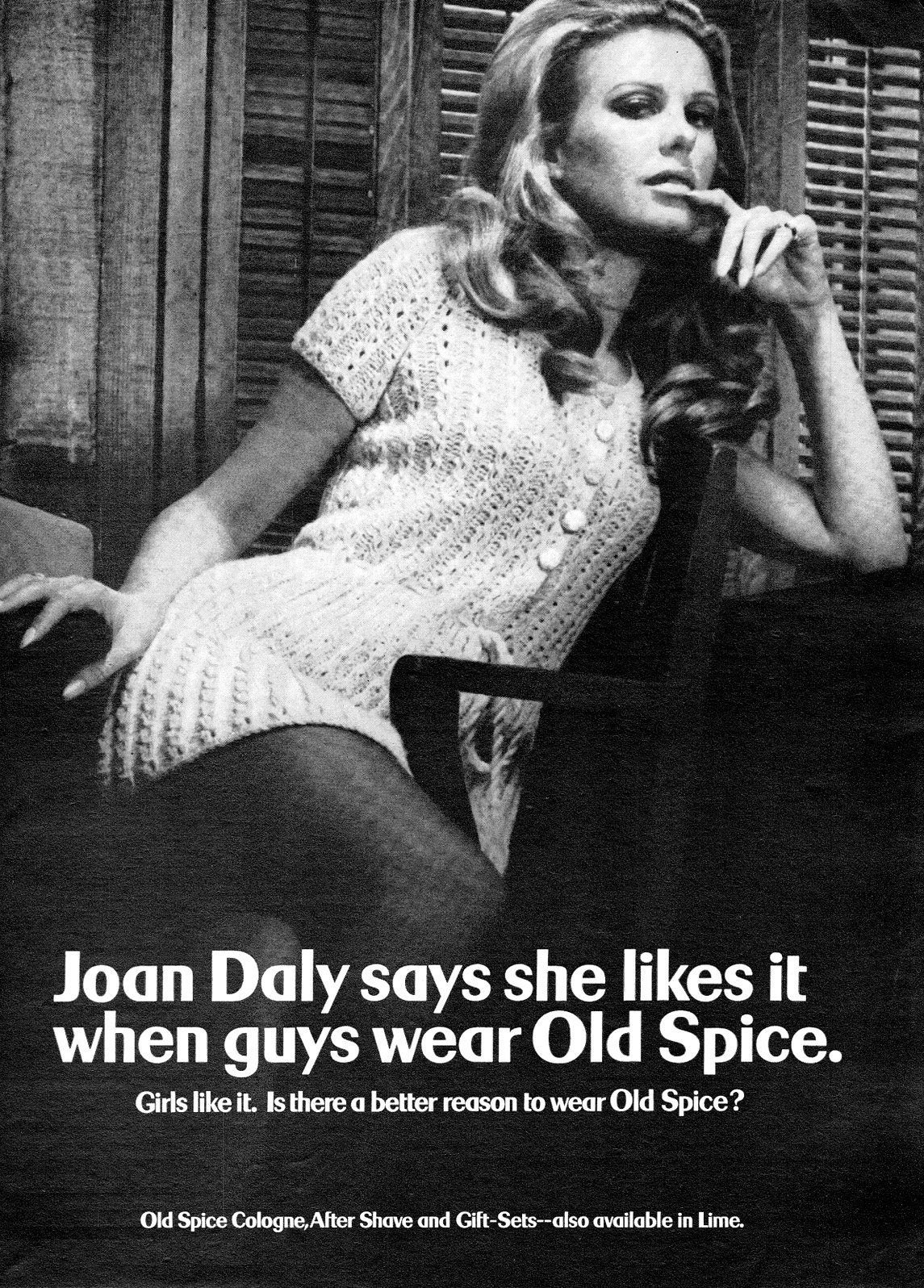 Admittedly, I’m not familiar with Joan Daly – I can only assume, therefore, that she is a fictional name made up for Old Spice ads (this one from 1969).  Correct me if I’m wrong.  Whoever this Joan is, she is absolutely squirming in her seat with ecstasy  over the mere whiff of Old Spice. 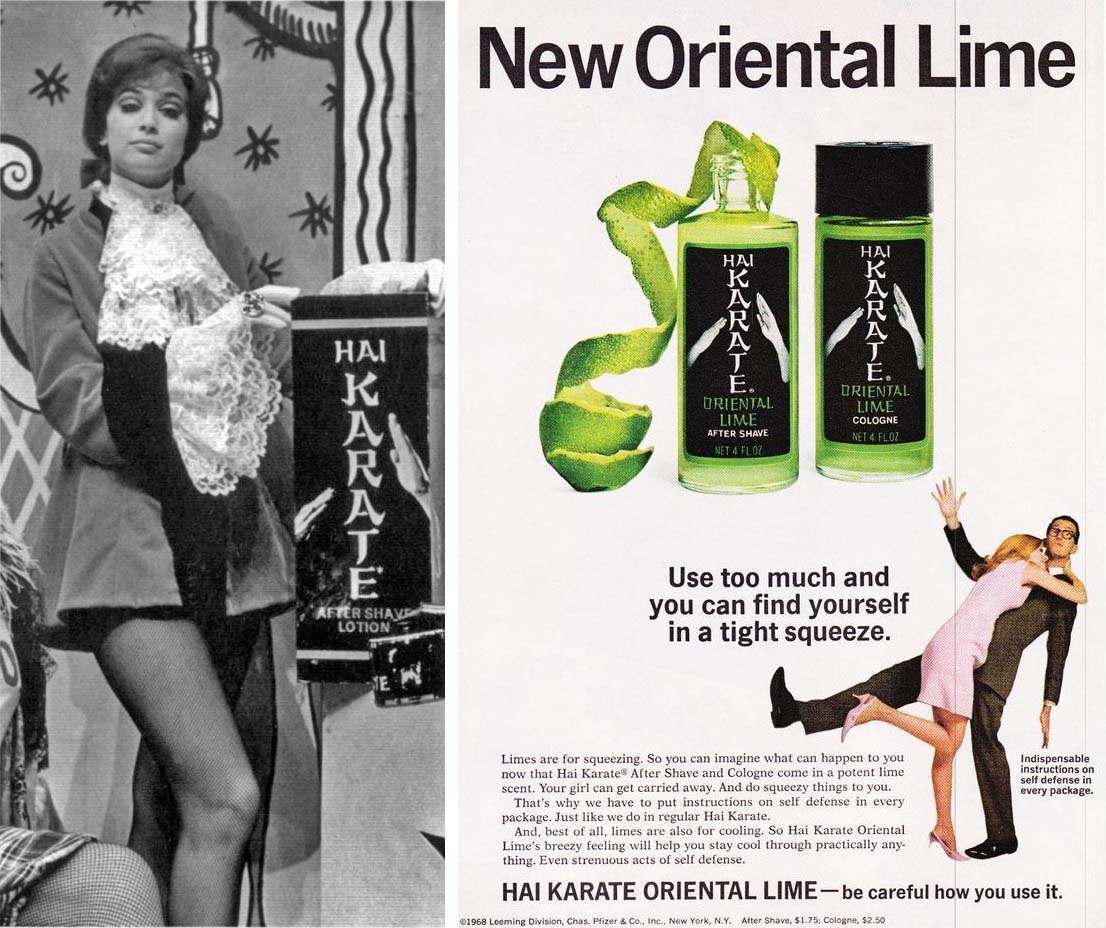 Hai Karate had a successful, fairly long running campaign featuring women unable to control their sexual appetite for guys wearing hai Karate – so much so, the guy would have to fight them off with martial arts.  Axe body spray wishes it was as effective as Hai Karate. 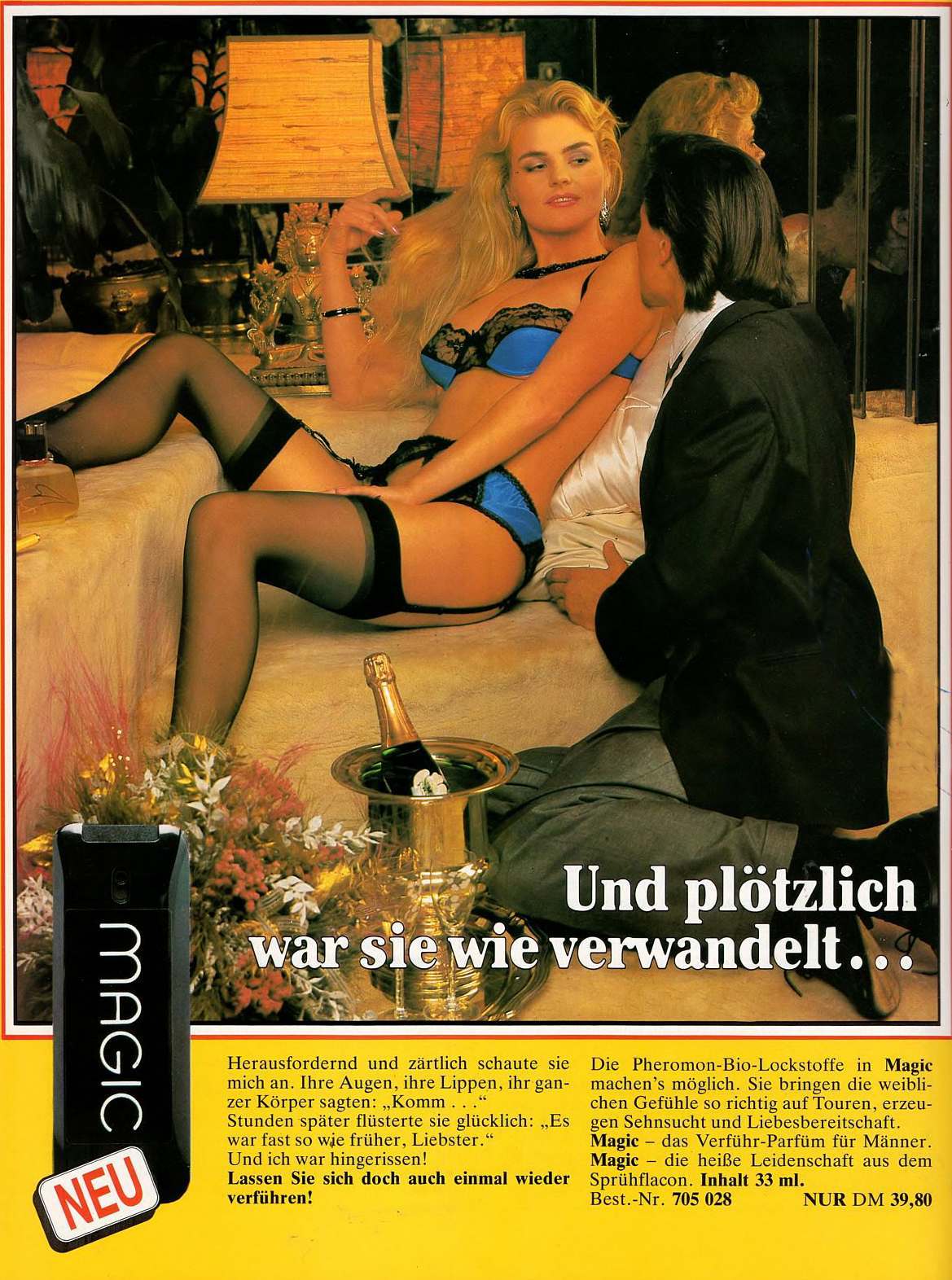 This could be you… if you’d just spray on a little Magic. It’s just that easy. I don’t speak German, but Google Translate spits it out something like this:

Challenging and tenderly she looked at me. Her eyes, her lips, her whole body said, “Come”.  Hours later she whispered happy: It was almost as before, love. And I was thrilled!  Let yourself be seduced once again!

Those fluent in the language, please revise. 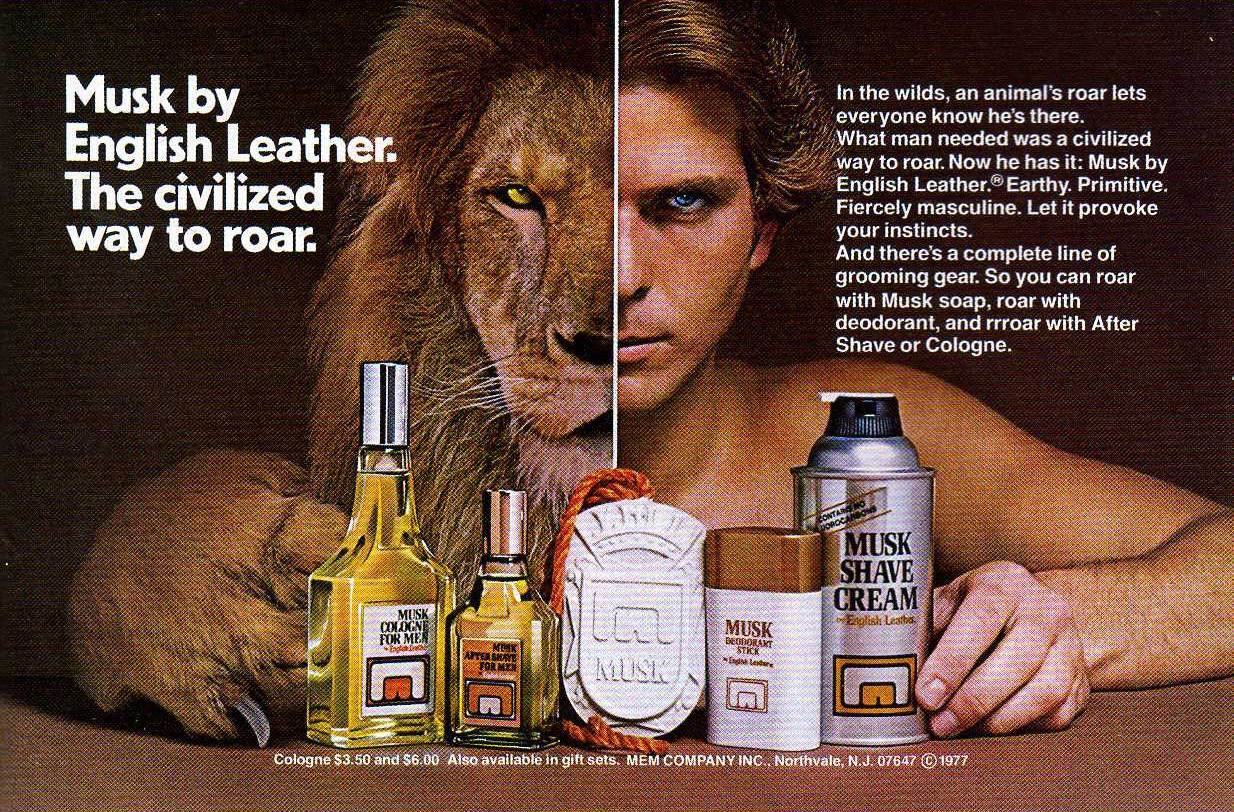 If you check out modern cologne adverts, you’ll find similar themes: namely, studs with women clawing at them.  But the 1970s was the era of the macho man – the ultra hairy, ultra manly man.  This Musk advert, which you’d saw everywhere back then, fit perfectly with the macho times. 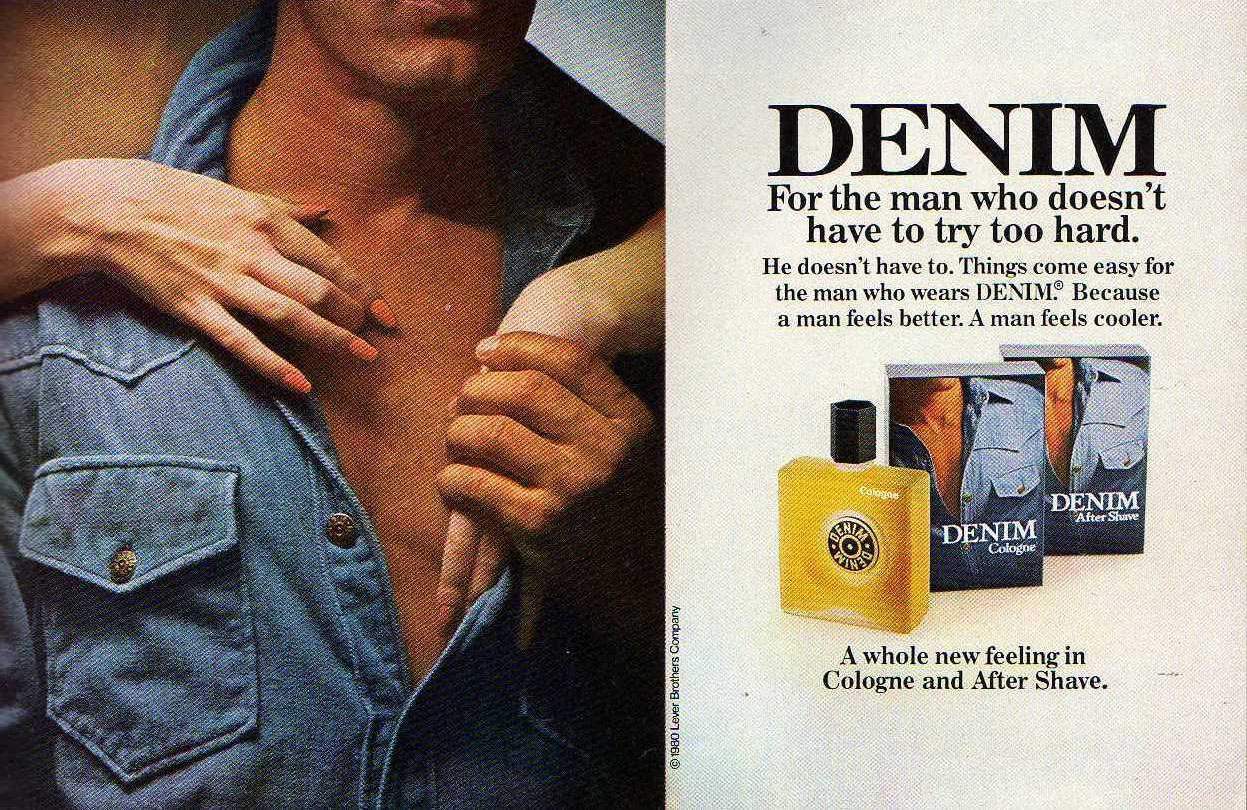 At a time when blue collar was king, denim ruled.  Of course a cologne named after blue-collar’s official fabric would attric clawing babes from all directions. 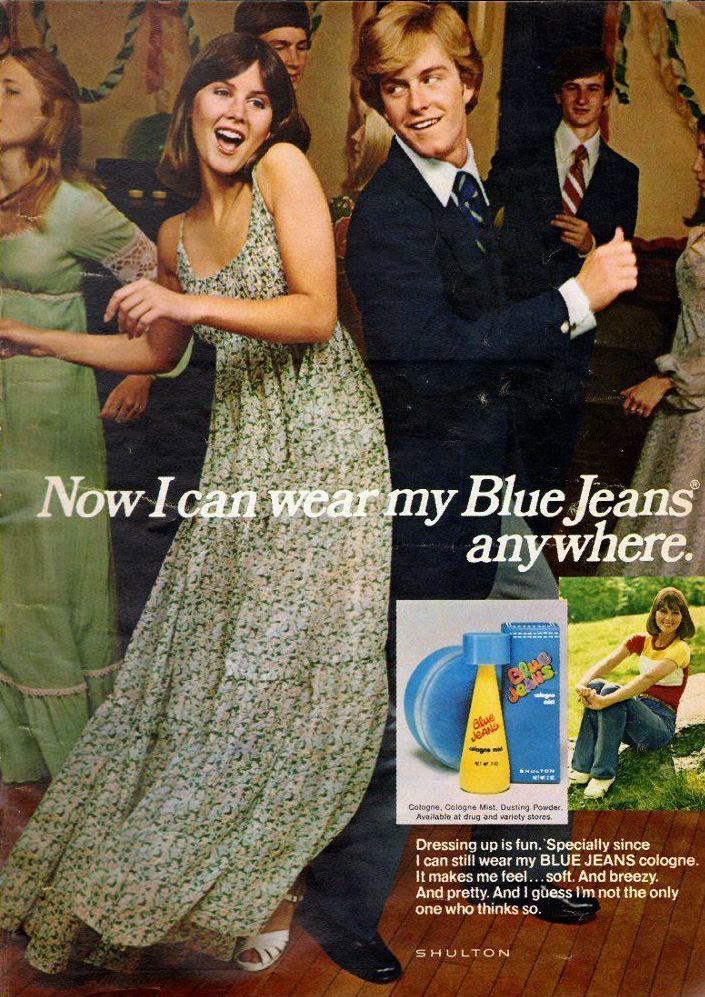 Yes, this is a female cologne.  But I just wanted to underline my whole “denim was cool” thesis.

Now we can move along…

Did I mention these ads tended to accentuate the manliness?  Somewhere there’s an after-shave advert featuring a man killing a mountain lion with his bare hands whilst smoking a cigar and satisfying a woman . 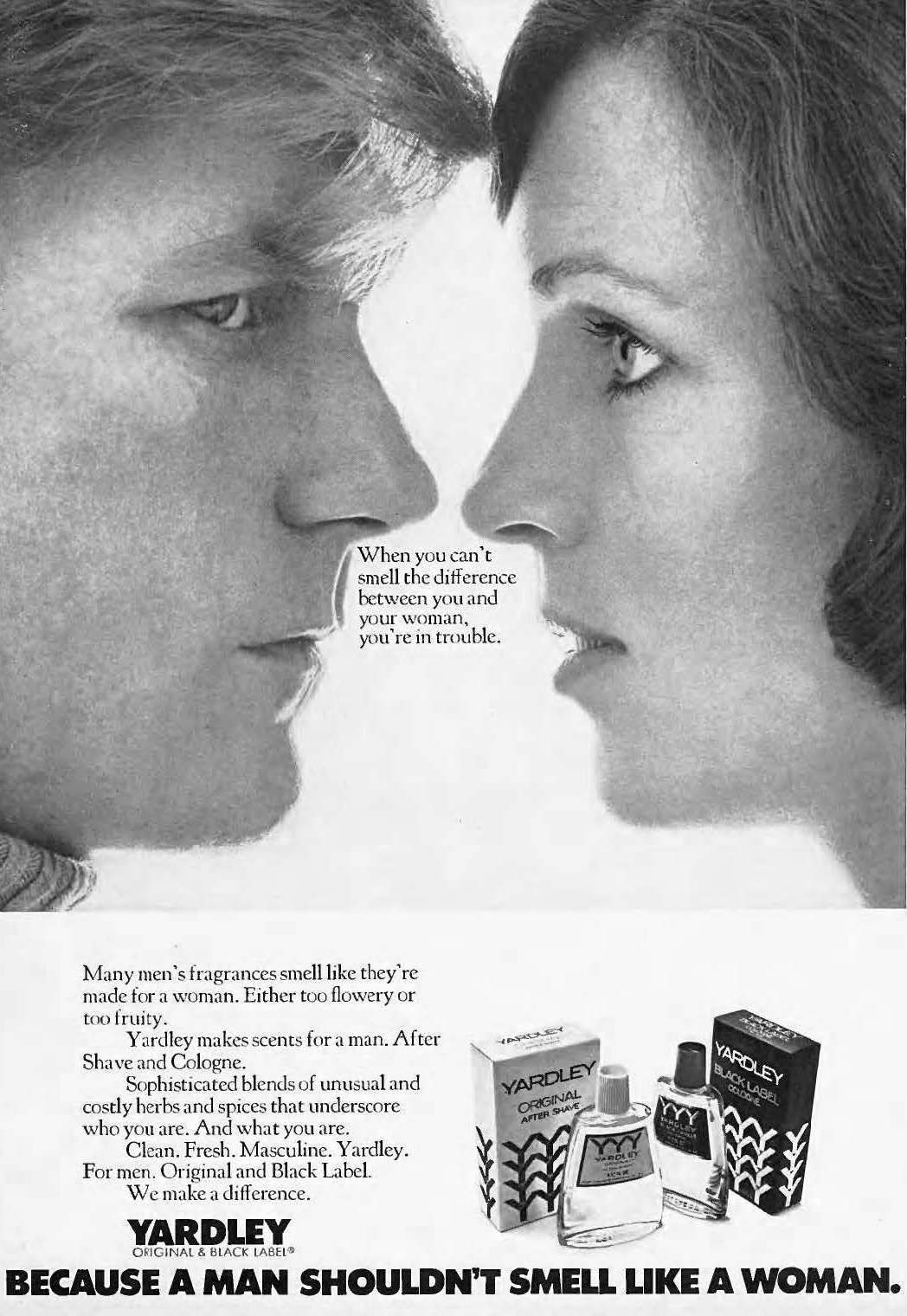 “When you can’t smell the difference between you and your woman, you’re in trouble…… Many men’s fragrances smell like they’re made for a woman.  Either too flowery or too fruity.  Yardley makes scents for a man.”

Like I said – it was a time of great manliness. 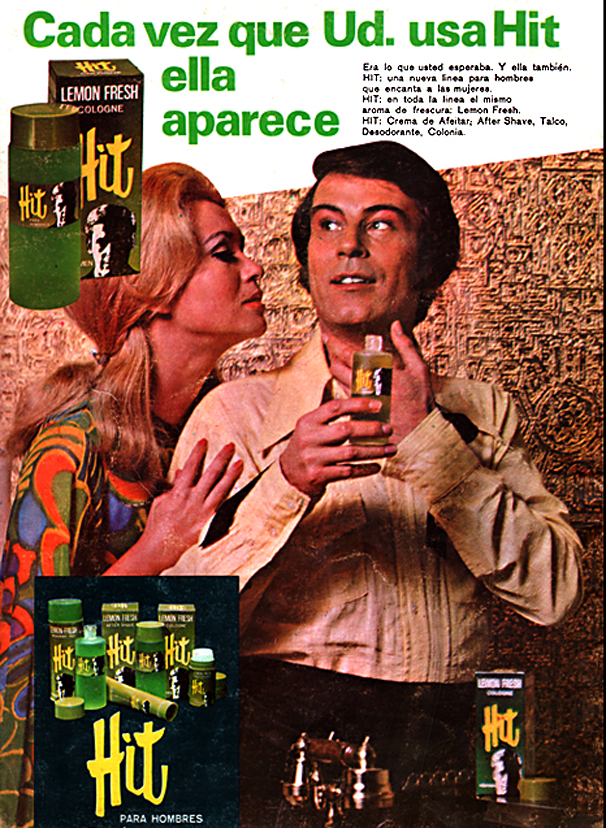 Every time you wear Hit, she appears.  This stuff is beyond pheromones – it possesses supernatural powers beyond human understanding. 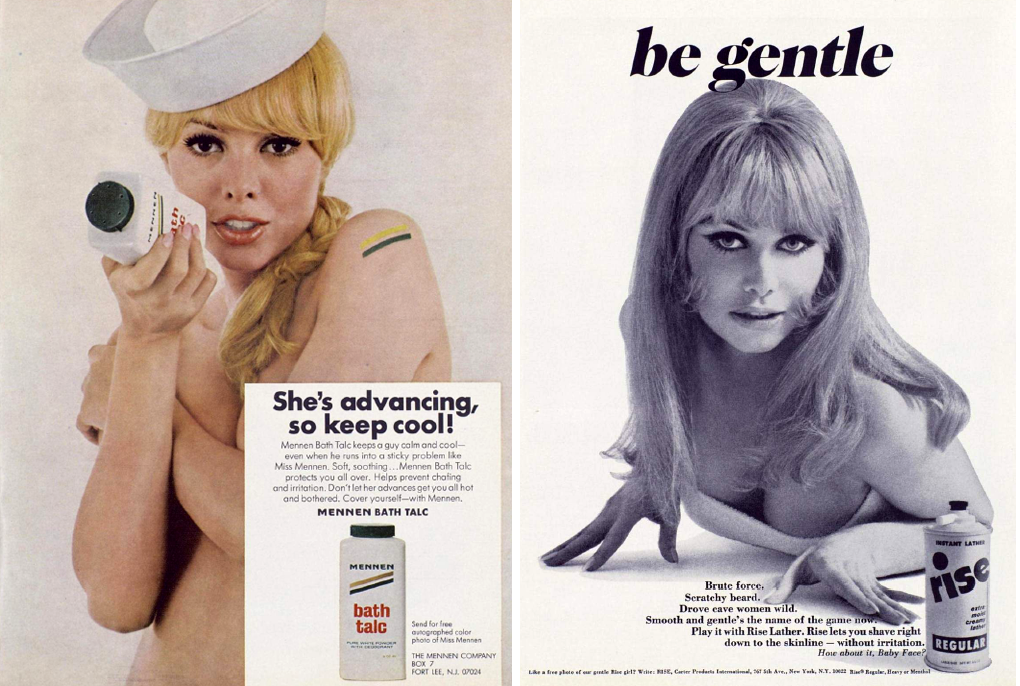 Cologne and aftershave aren’t the only female attractants.  Even bath talc and shaving lather will bring in the honeys. 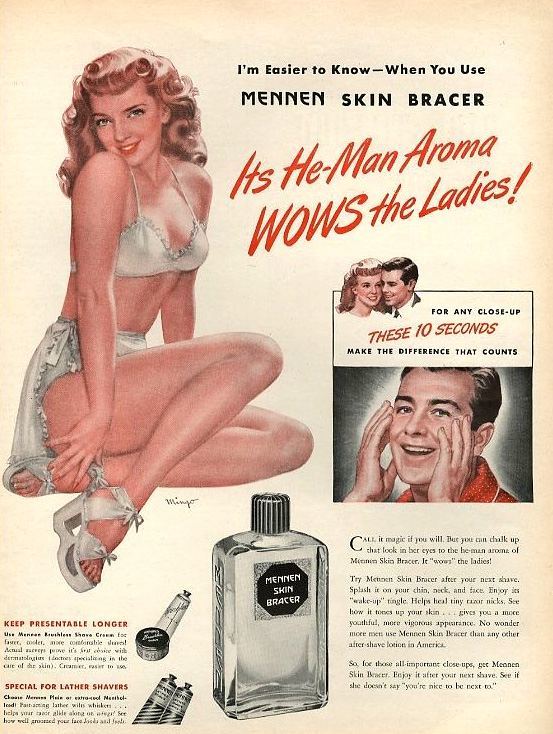 “Call it magic if you will.  But you can chalk up that look in her eyes to the he-man aroma of Mennen Skin Bracer.  it “wows” the ladies!”

I will call it magic.  A dark magic which subdues the will of women.  It must be stopped.  Somebody call Gandalf. 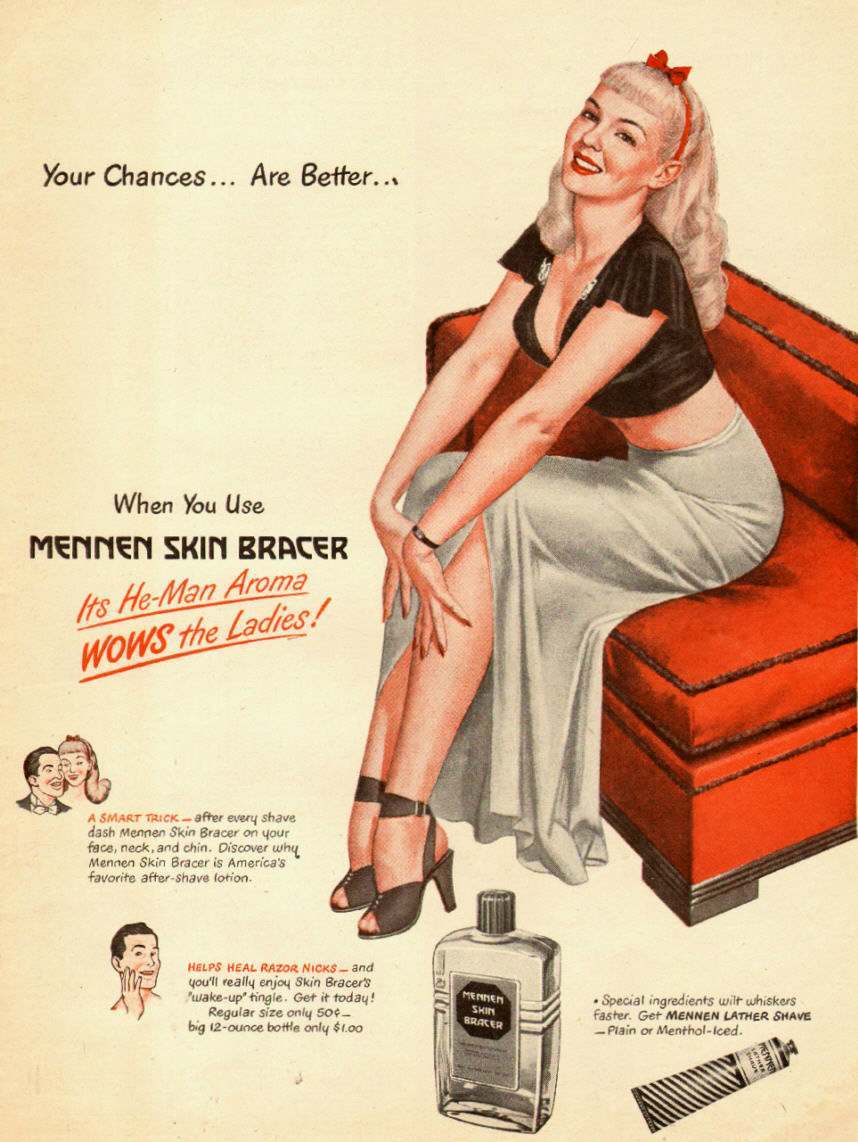 I love how old adverts avoid beating around the bush or being ironic or cheeky – they were straight to the point:  Your chances of having sexual intercourse are improved when you apply this product. 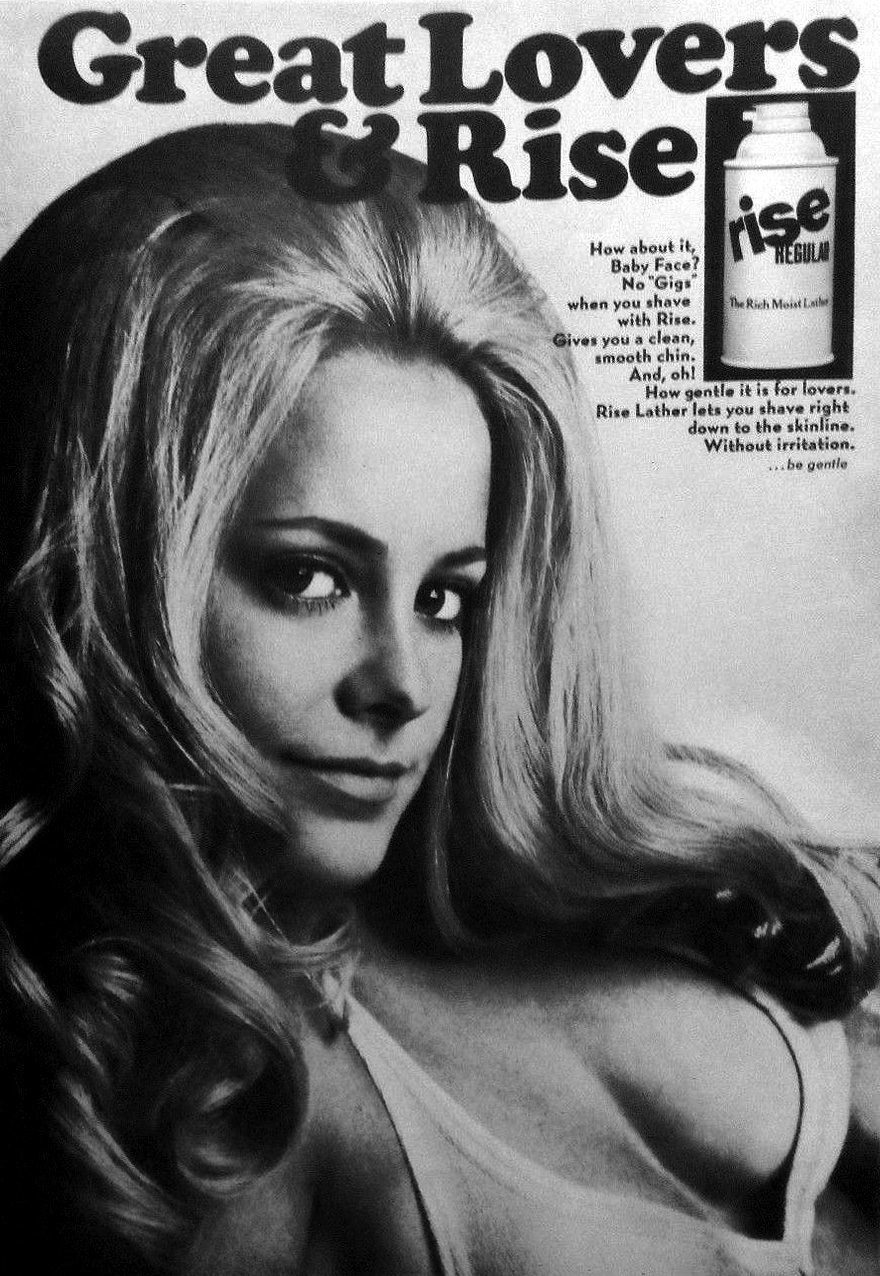 Call it a hunch, but I’m getting the impression that “rise” has a meaning totally unrelated to grooming. 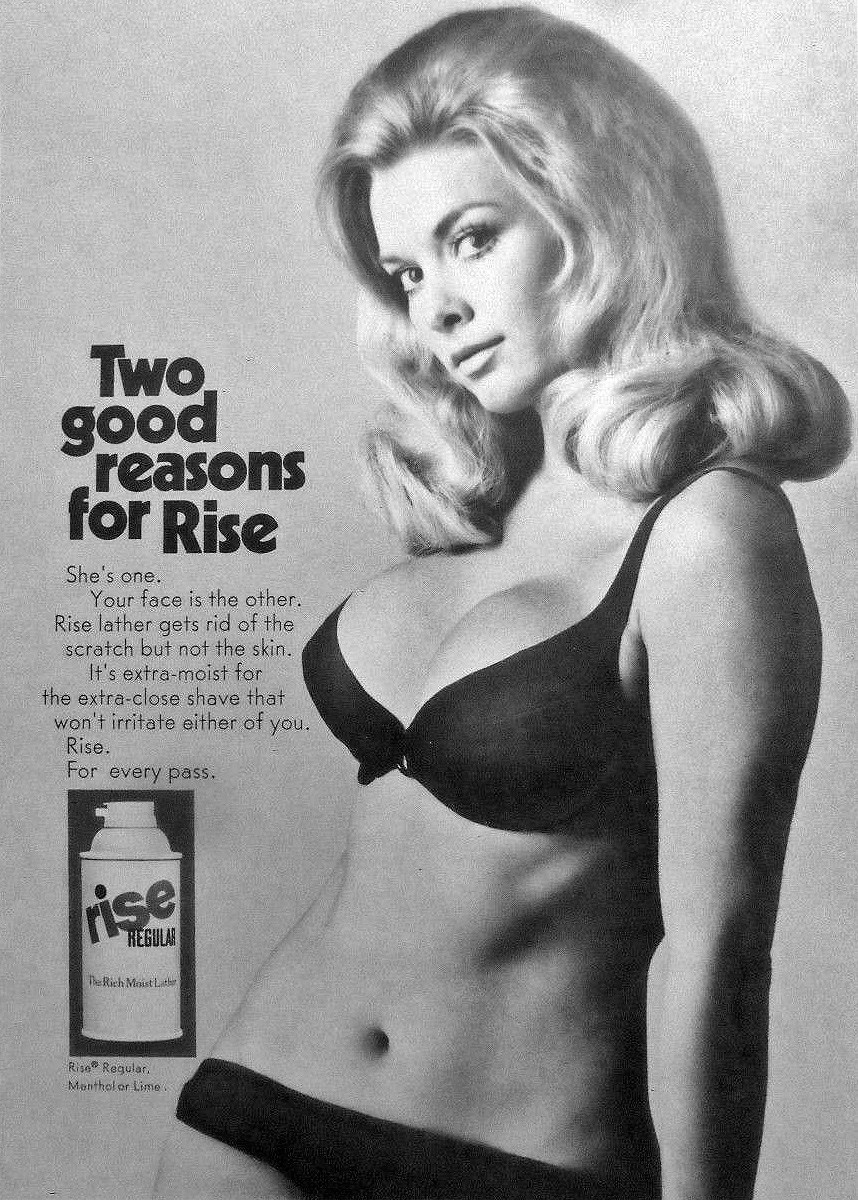 So, let me get this straight.  The two good reasons for Rise: this woman and your face.  Got it. 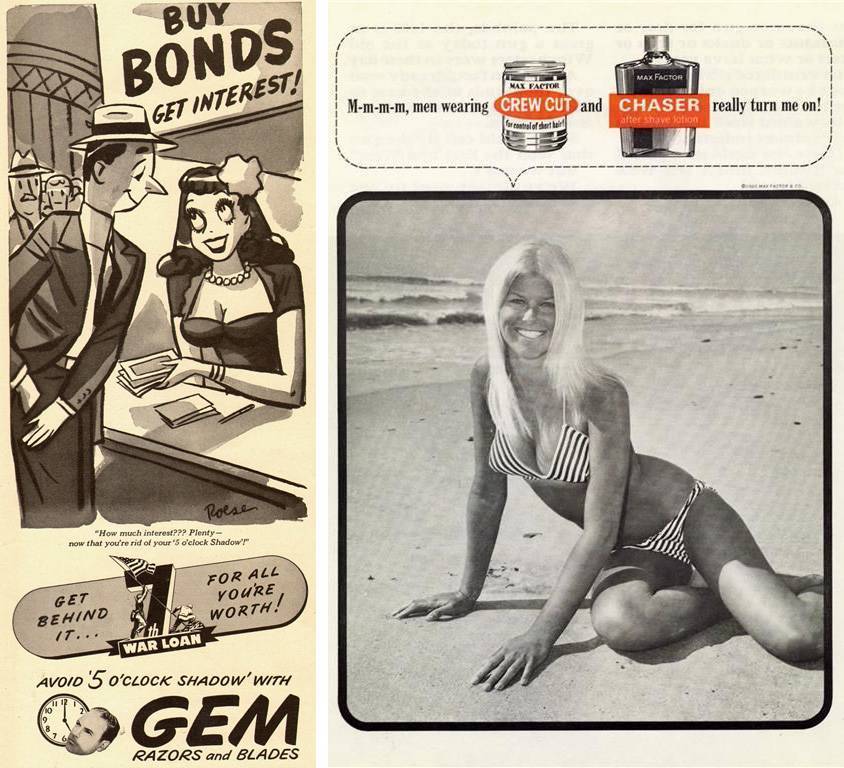 The left from 1945, the right from 1966 – it doesn’t matter the decade, the message is the same.  Chicks will dig you if you apply our product. 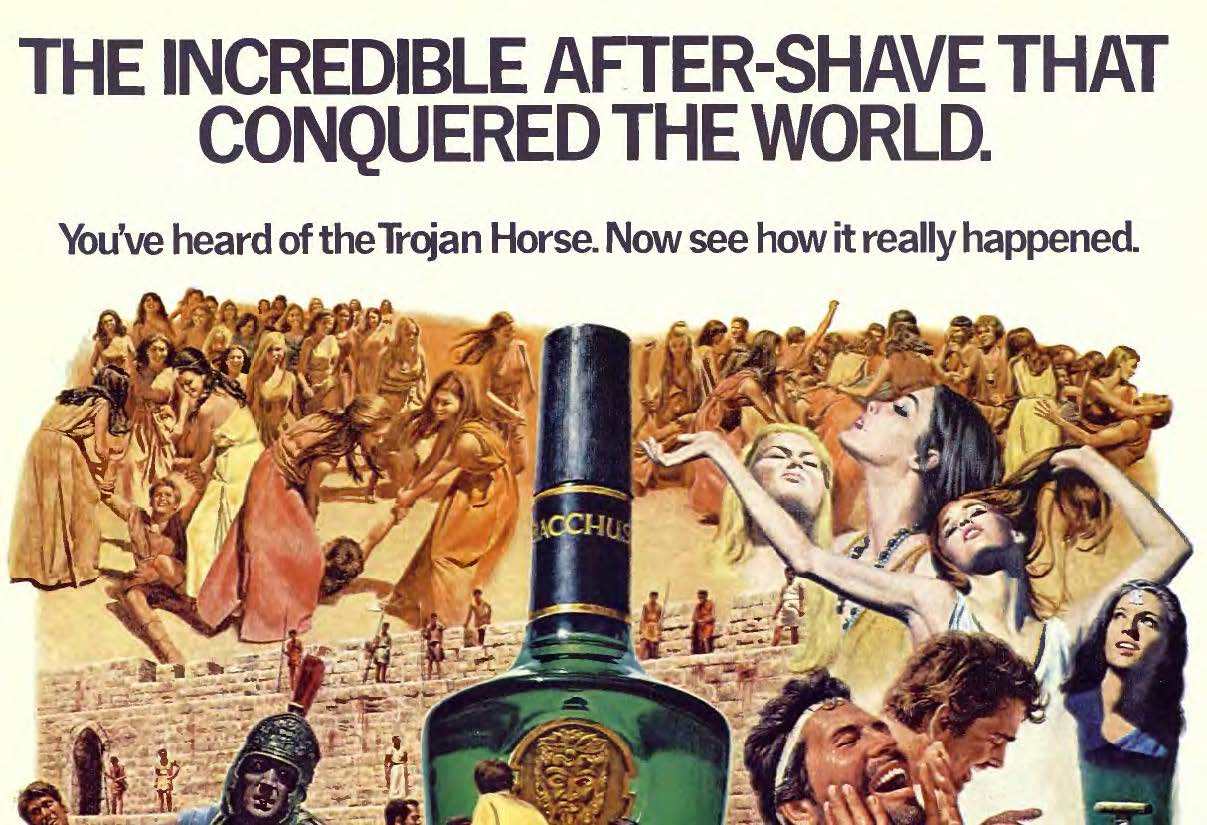 Bacchus takes things to their logical extreme.  Not only does it attract women like bees to honey, it creates a sort-of orgiastic frenzy.  Towns and villages across this great land will erupt like Mount Vesuvius into a giant ball of sex.  This giant phallic-looking bottle may spell the end of civilization itself, as it did for once-great civilizations before us.  Use wisely.