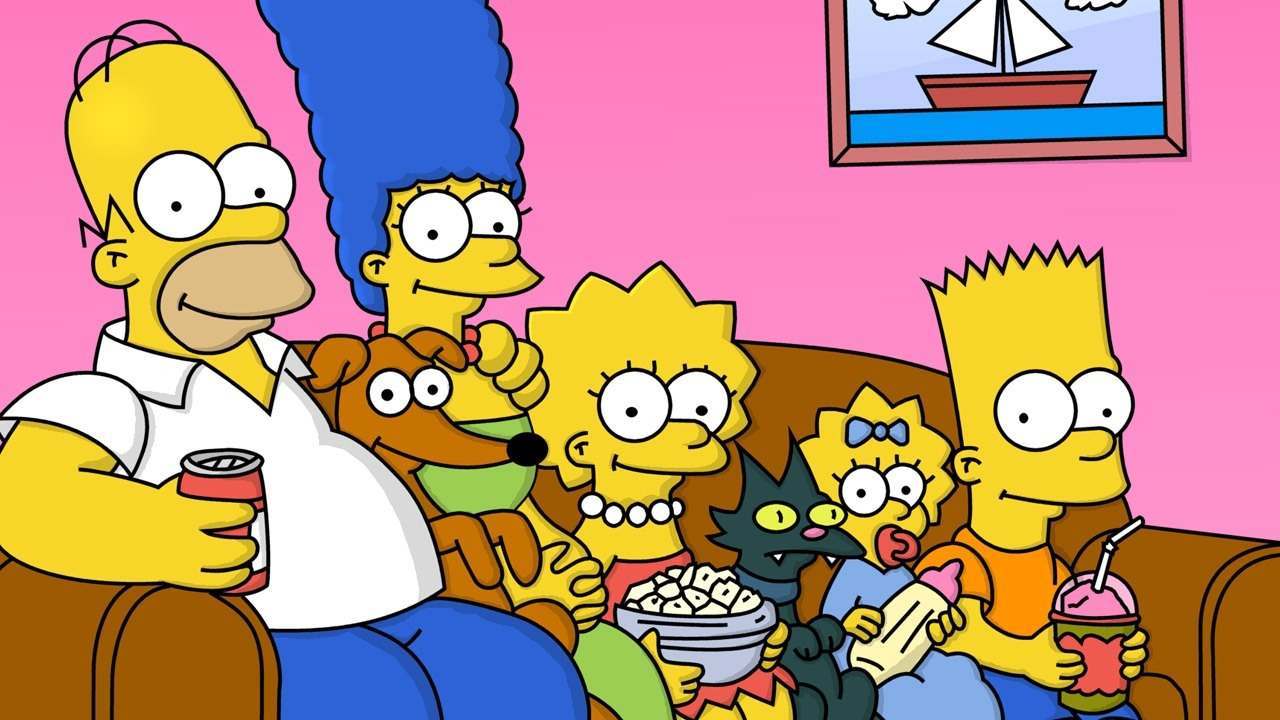 If you want to, you can read all the conventional wisdom that is available all over the Net.

The Simpsons (1989 to present) has — for at least the last several years — been a mere shadow of its former (great) self.

The truth is somewhat more complicated than that criticism, of course.

The Simpsons began its TV life during the First Bush presidency over a quarter century ago as a caustic cartoon satirizing American middle class families and their values. In that era, family comedies were everywhere (Family Ties, The Cosby Show, Roseanne, etc.) and The Simpsons was an alternative to the idealized programming.

After about a dozen years or so in that format — not to mention over two-hundred episodes – the central premise, a cartoon family as real American family, was pretty adequately played out, and The Simpsons by necessity had to evolve.

And what it became is something truly wonderful and unexpected.

The Matt Groening-conceived series transformed from sitcom parody/corrective into an absurdist, gag-a-minute, post-modern, meta-commentary on all-things pop culture, from YA novels to iPhones, from politics to Internet etiquette.

Furthermore, the series took pride in focusing on its remarkable supporting cast — Ned Flanders, Moe, Chief Wiggum, Mr. Burns, Smithers, Nelson, Skinner, Otto, Apu, Grampa, Krusty, Milhouse, Patty and Selma — to such a degree that it thrives to this day, in many senses, as the best developed such ensemble on modern American television.

We hear all the time from the audience who started with the show back in the late 1980s.  They observe that the series is a shell of its former self, when the truth is that The Simpsons is a different animal than it once was. And in some ways, it’s a far more entertaining, far more inventive program.

Perhaps then, the series deserves to be judged based on what the program continues to be, not how it began twenty-seven years ago.

One way to judge the conventional of declining quality is to look back over the last fifteen years — the years of the twenty-first century — and remember some of The Simpsons’ greatest movie parodies. These shorts (often featured on the Treehouse of Horror specials) remind us that the stories hasn’t missed a step, and remains the funniest series airing on network TV

In ascending order, here would be my choices for the best movie parodies of this particular time span. 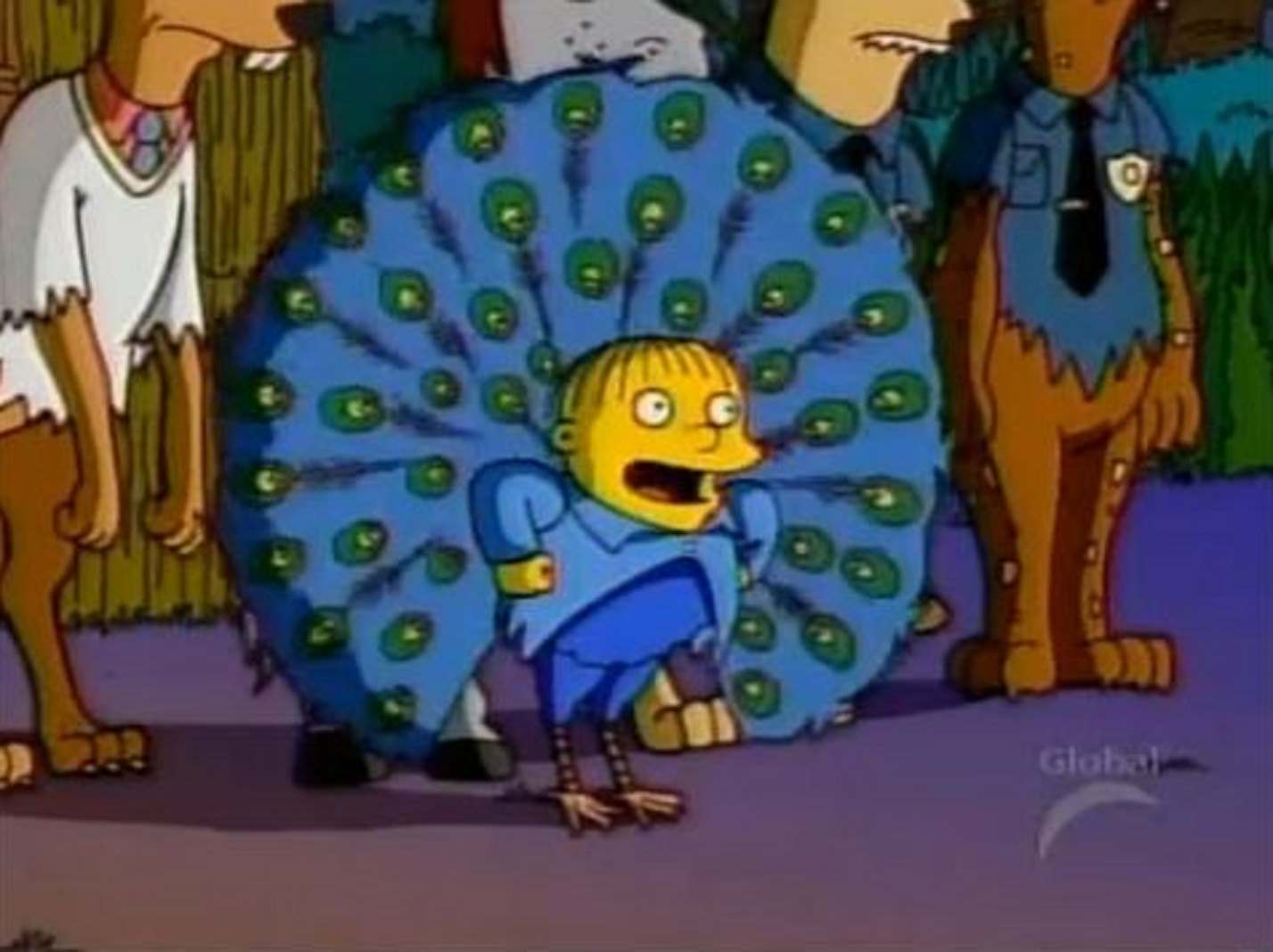 “The Island of Dr. Hibbert”

“This Treehouse of Horror” entry from 2002 satirizes virtually every film version of The Island of Dr. Moreau (or Island of Lost Souls), and became even more timely given that its central monsters — chimeras – eventually became the unlikely subject of George W. Bush’s State of the Union Address in 2006.

In “The Island of Dr. Hibbert,” the Simpsons go on vacation at a tropical island, only to learn that the always-laughing Dr. Hibbert has utilized his “House of Pain” to transform the denizens of Springfield into human-animal hybrids. The mad doctor transforms Marge into a panther, Ralph Wiggum into a peacock (who thinks he’s a dog), and Flanders into a cow-centaur that needs milking. Homer attempts to intervene and reverse the process, only to realize that it is better, after-all to be part animal.  Now he won’t have to go to work, and he can sleep and eat all the time.  Homer decides to sign up for the procedure and is happily transformed into a walrus man.

This episode offers the wonderful visual conceit of the beloved Simpsons characters as animals, and it’s rewarding to see each character blended with an example of the animal kingdom. 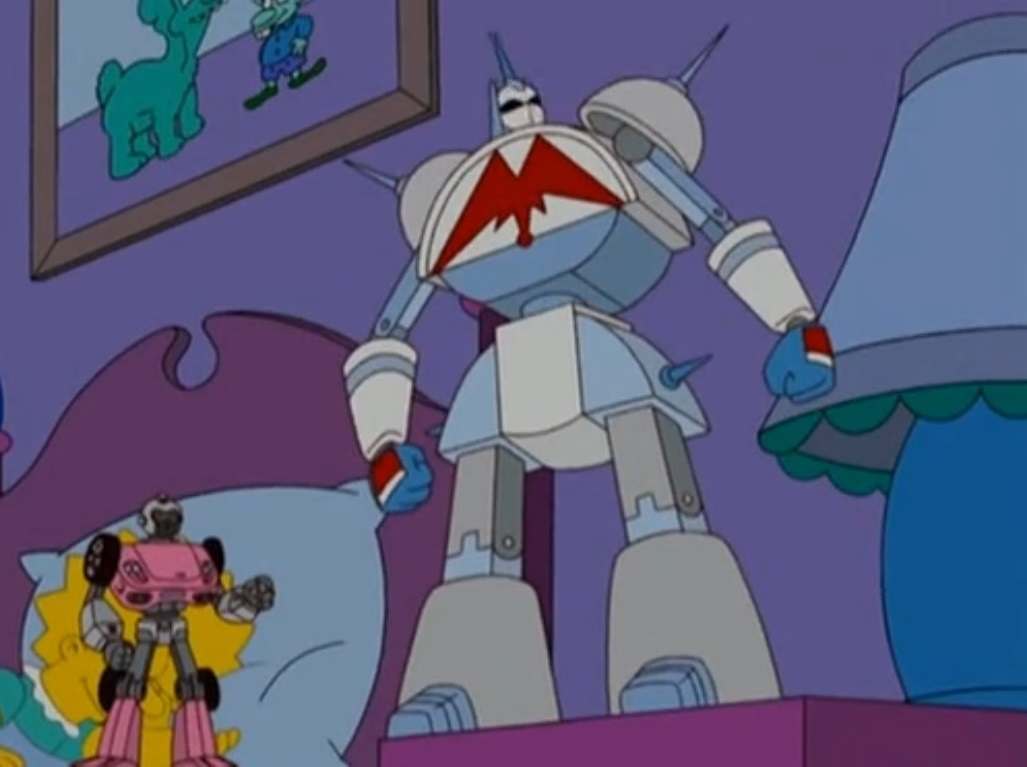 This episode aired in season 20, in the year 2008, and spoofed the dreadful (and bafflingly successful) Transformers movies from Michael Bay.  In this case, robots with goofy but familiar-sounding names like “Best-imus Mucho” battle it out in Springfield until Marge wisely points out that nobody even remembers why the good robots and bad robots are still fighting.

The parody exposes not only the thin-ness of the movie franchise’s premise, but its focus on violence and destruction over drama, character, or even basic story-lines. It’s all just a demolition derby of crunching metal.

Amusingly, one alternate title for this parody is “Trans Morphers.” 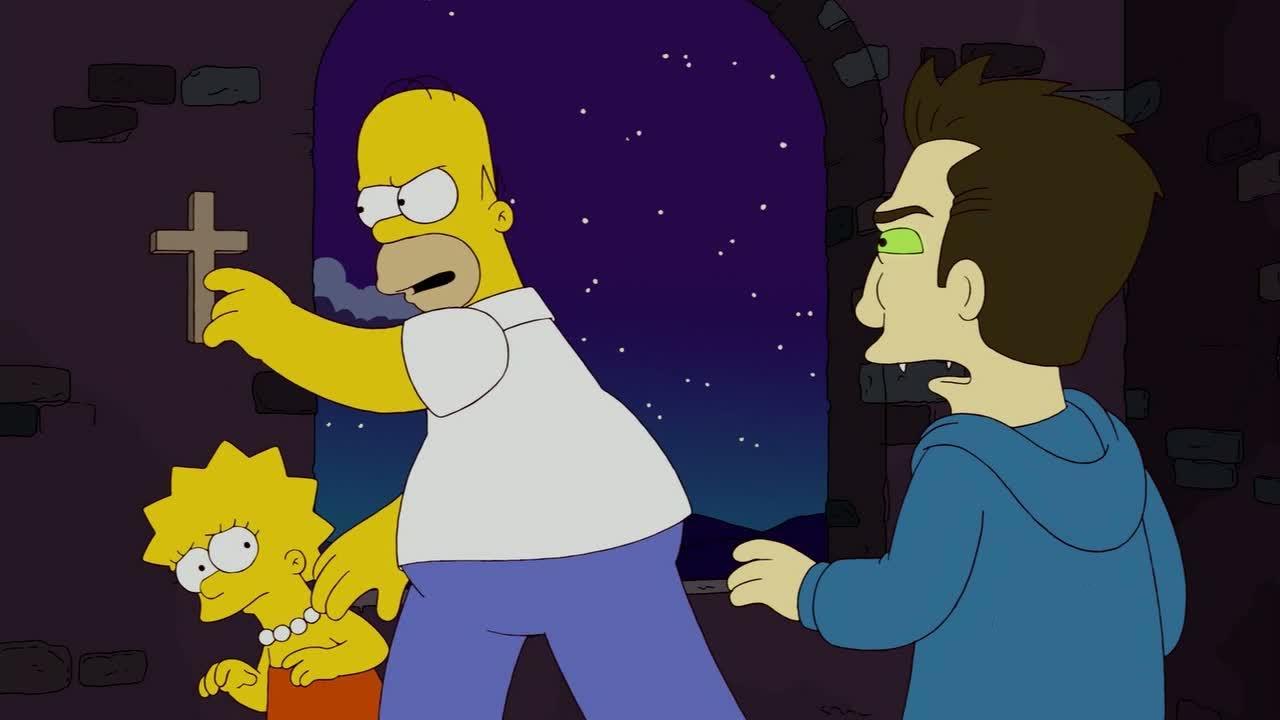 As you can detect from the title, this parody from 2010 (and the twenty-second season) takes dead aim at the Twilight craze of last decade, and the sudden ubiquity in our entertainment of emo, glittery vampires.

In this story, Lisa meets a James Dean-like new kid at Springfield, Edmund, who is really a vampire, and the episode soon follows the beats of the first Twilight book and movie.  Before long, Edmund is protecting Lisa in the school parking lot from a series of near car-accidents, and then leaping with her from tree-top to tree-top (just like the way bats travel, he notes…).  Team Milhouse, meanwhile, transforms into a were-poodle to fight for her honor.

Before this short is over, Sesame Street’s The Count, Dracula, and others make cameo appearances, and Homer, taking on the Charlie Swan role, attempts to stop Lisa from becoming an immortal blood sucker. In the end — not unlike the events of “The Island of Dr. Hibbert” — our everyman Homer decides it is better to join ‘em than beat ‘em. 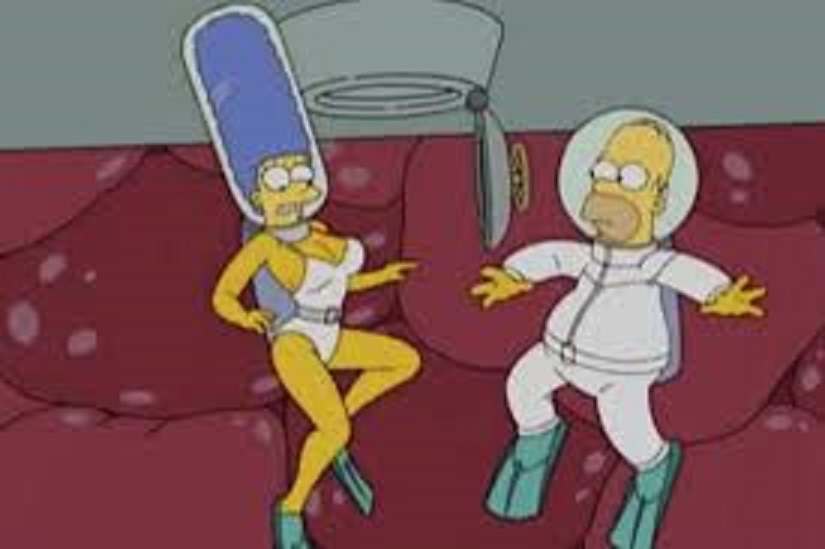 “In the Belly of the Boss”

This parody characterizes The Simpsons’s stellar attention to visual detail.  In “In the Belly of the Boss,” the Simpsons must be miniaturized so they can rescue Maggie, who has been shrunken, put inside a pill capsule, and swallowed by Mr. Burns.

The short promptly turns into a full-fledged, meticulous parody of the 1966 sci-fi movie Fantastic Voyage, with Homer, Marge, Bart and Lisa boarding a miniature submarine that looks just like the Proteus, and traveling inside Mr. Burns’ crusty old body.

The greatest moment, however, arrives when Marge — in the spirit of Voyage star Raquel Welch — reveals that she is more buxom than usual. 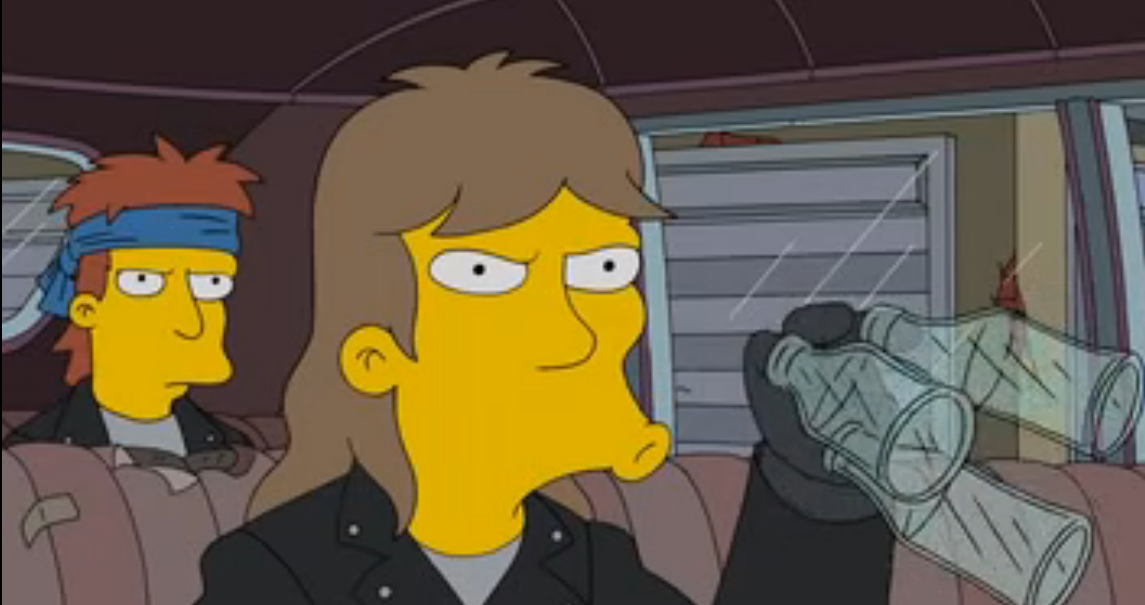 I must confess, this is my favorite all-time Simpsons parody, in part because it is so unexpected.

Often these parodies appear in the Treehouse of Horror segments, but every now and then, a story just magically slips into movie or pop-culture satire, and you have to admire the series’ audacity.  In this case, the episode “The Winter of His Content, from the 25th season, The Simpsons chooses great source material: Walter Hill’s 1979 action-adventure, The Warriors.

Here, Bart joins the bullies (including Nelson), right as they are undertaking an odyssey to visit a bully summit.  At the summit however, Bart is framed with on attack on the bully leader (using his sling shot).

Now, Bart and the bullies must make their way home, fighting bully gangs such as “The Furries” (rather than the movie’s Furies), Krusty’s Kids, and the Scary Potters.  Even the D.J. on the radio (imitating the character in the movie) seems out to get them, tracking their every step.

Finally, David Patrick Kelly’s bottle-clacking call, “Warriors…come out and play” is resurrected triumphantly during the course of this finely-tuned parody. 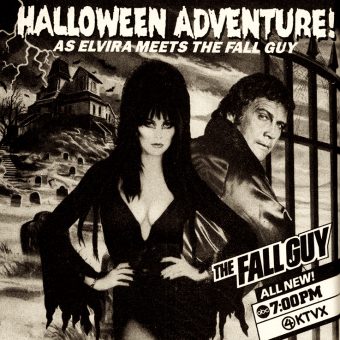 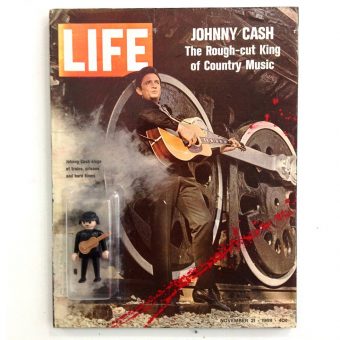 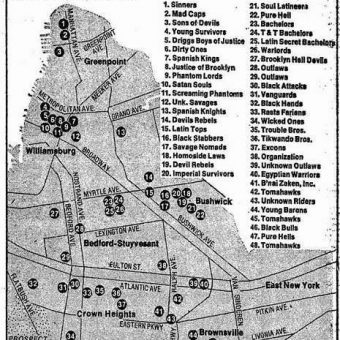