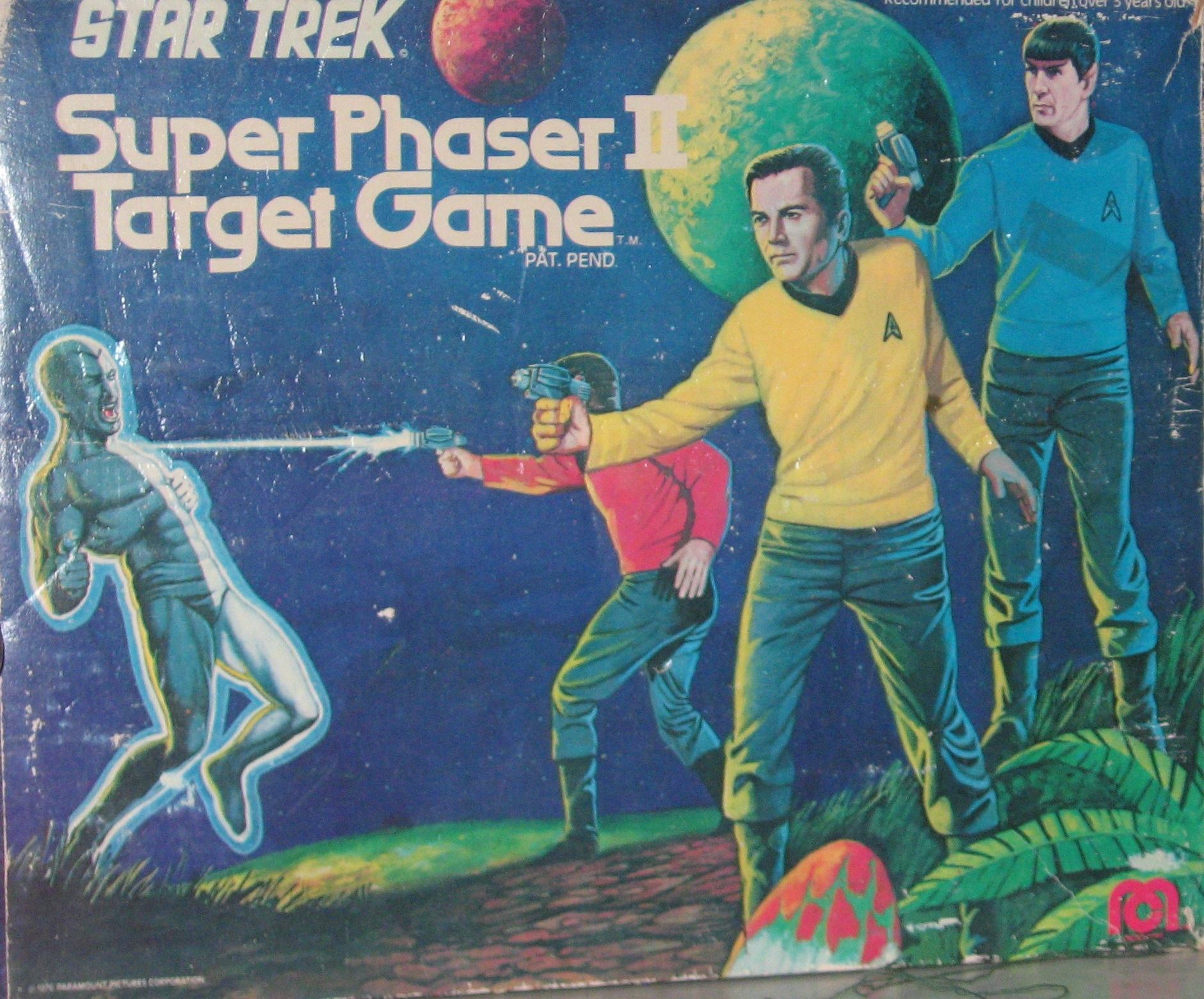 If most kids today are like my eight year-old son, they generally don’t play today with — or have much interest in — toy guns.  Minecraft and its pick axes and diamond swords just do fine by him.

Perhaps my generation — X — was the transition point away from six shooters, the Lone Ranger, and cowboys and Indians, because we still played with toy weapons, but with a difference.

In the 1970s, those toy guns were lasers, and could be set to stun, thus reducing the mortality rate of our make-believe enemies, I suppose.

Here are my selections for the most awesome space guns of the disco decade and my mis-spent but happy youth playing with them. 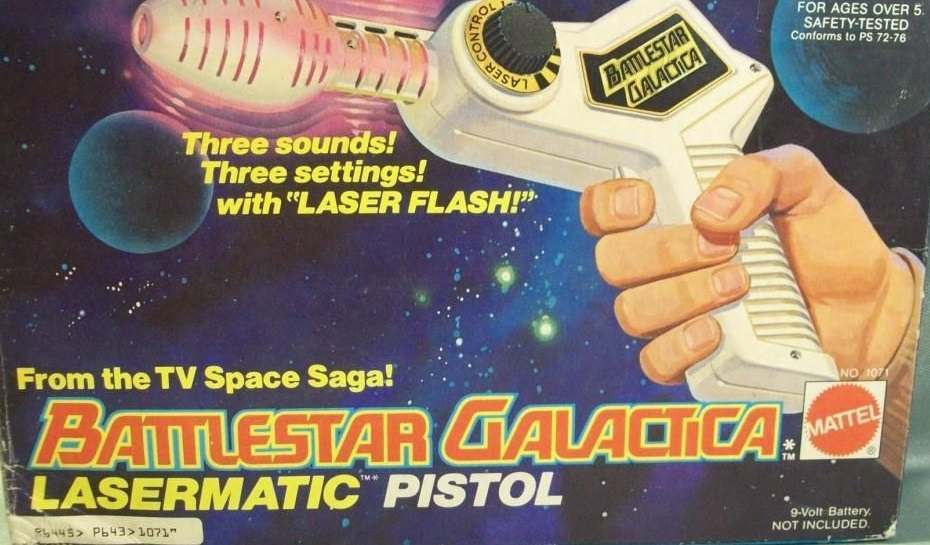 Although this toy is in no way show-accurate, the “lasermatic” pistol is nonetheless a pretty cool toy.  It possesses three separate sound settings, three different laser sounds, and a “pulsating laser flash.”

The lasermatic pistol, a corollary for the Glen A. Larson program’s Colonial Blaster, I suppose, also has a knob on the side so, during your battles with the Cylons, you can adjust all these settings.

Still, you can see where Mattel has its priorities: merchandising! The gun is emblazoned with a huge BSG logo.

Shoot Out In Space (Tomy)

The game called Shoot Out in Space was a “real test of marksmanship” according to the promotional materials.  The goal of the game was to “disable enemy rockets with a mysterious beam of light.”

In broad terms, the toy involved “cosmic combat with a ray gun, revolving station and enemy rockets.”  You could even modify your laser weapon to your liking, making the “ray gun hand-size by separating it from the stock.”

The light beam from the ray gun worked “on a transistorized target at distances over 30 feet,” and you could also “change the target to make it harder and harder to hit.”

My best friend who lived next door to me owned Shoot Out in Space, and often invited me up to his third-floor playroom to shoot down the enemy rockets.

We would spend a while playing the game, and then inevitably take the (soft) rockets off their galactic perch and peg each other with them, pretending they were space grenades.  So this toy had a great gun, plus the opportunity for real injuries.  Yes! 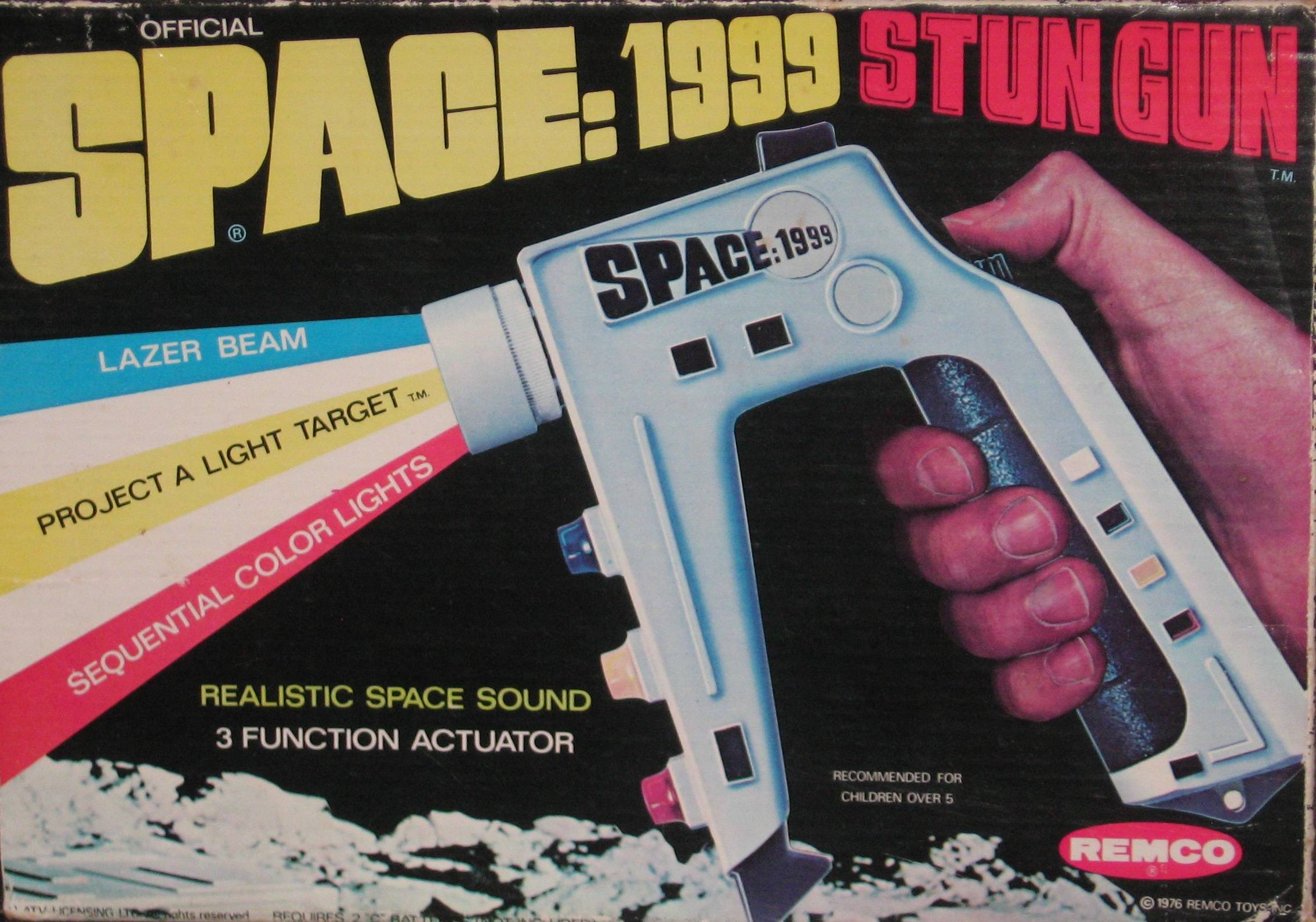 Space: 1999 (1975 – 1977) was my favorite space adventure of the 1970s, arriving before Star Wars by two years.  Remco released a stun gun based on the staple-gun like Moonbase Alpha firearm seen on the Gerry and Sylvia Anderson program.

But when you de-pressed the trigger (located above the handle), you could “fire” a “lazer beam,” “project a light target” on a wall (like an Eagle spacecraft, for instance…) or enjoy the “sequential color lights.” 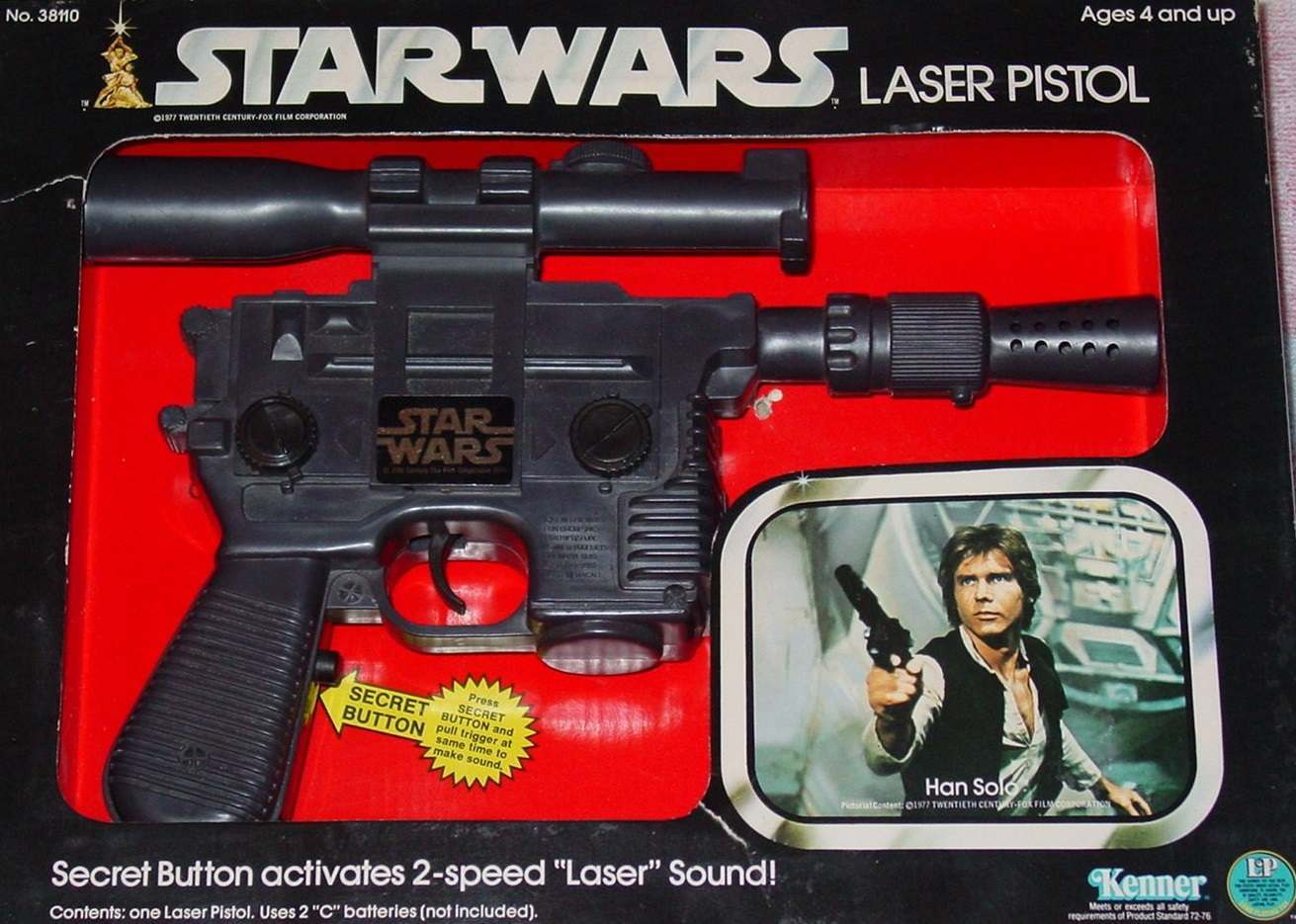 What kid growing up in the 1970s didn’t want to be Han Solo, captain of the Millennium Falcon and all-around heroic scoundrel?

This very authentic-looking toy from Kenner transformed that fantasy into reality.  The toy made a laser blast noise that sounded more like a dentist’s drill than anything found in the Lucas movie, but the whole thing was still amazing. 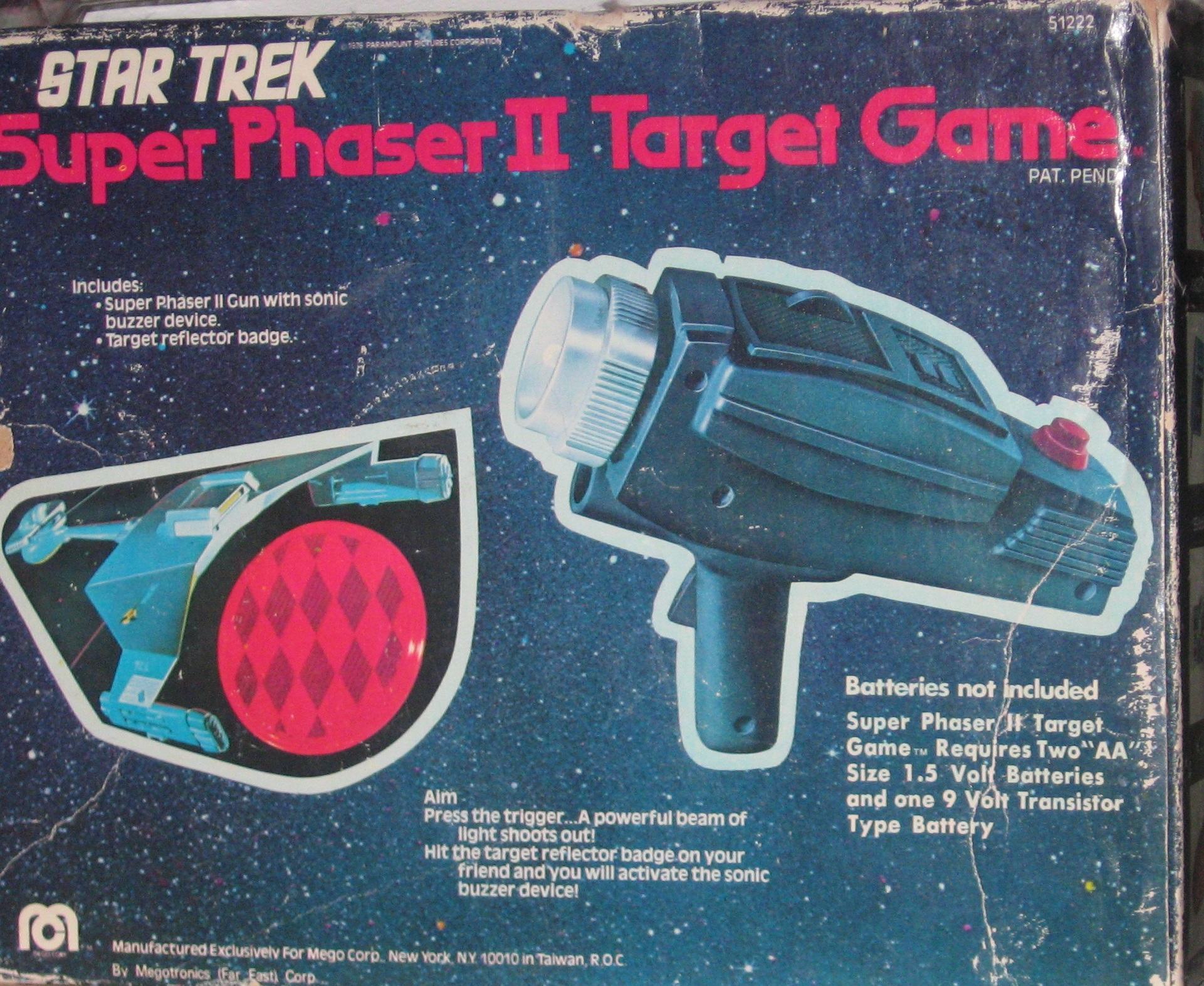 One of the best, if not the best of all space guns was the Star Trek “Super Phaser II Target Game” manufactured “exclusively” by Mego.

This weapon “was light sensitive,” according to the box “and operates best when used indoors in subdued light.” You would just “aim…press the trigger…A powerful beam of light shoots out!”

Additionally, you were encouraged to “hit the target reflector badge on your friend,” and thereby “activate the sonic buzzer device.”

So this model phaser was the forerunner of Photon and Laser Tag toys of the 1980s, I guess. The set came with a “Super Phaser II Gun with sonic buzzer device” and a target reflector badge that featured the image of a Klingon D7 battle cruiser.

My parents bought me two of these guns so I could blast away, willy-nilly, at friends on the playground and they could return fire