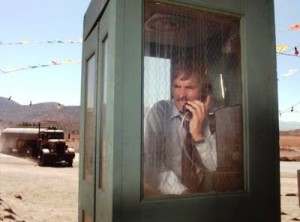 In Understanding Media, Marshall McLuhan wrote that the modern automobile has become “the carapace, the protective and aggressive shell of urban and suburban man.”

In horror movies, cars and trucks have become even more than that. They have become, in fact, a physical manifestation of man’s Id or  dark side, and vehicles for the furtherance of Evil to boot.

When broaching horror movies about evil vehicles, the big question is: how could our beloved machines turn on us, their owners and creators?

In some cases vehicles — having acquired sentience — simply know better than we do, and they ruthlessly assert their control.

In other cases, our tools — perhaps sensing some inadequacies in the driver’s seat– have switched to a more powerful owner: the Devil himself.

Below are my choices for the five most diabolical vehicles in the horror cinema, listed in chronological order.  You may notice that all of these vehicles appeared on our screens during the 1970s and 1980s, an era defined by affluence and conspicuous consumption.  Perhaps these evil film vehicles thus represent our fear that the objects of our material desire actually have a mind of their own. 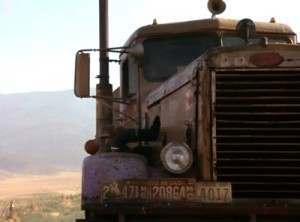 Originally a TV-movie, Steven Spielberg’s Duel was released theatrically in the United States in 1983. The film depicts the pulse-pounding tale of a wimpy salesman, David Mann (Dennis Weaver) who meets up with a relentless, rusty truck on a desert highway.

The truck is driven by a mysterious and mostly unseen cowboy figure, but the truck itself seems to be a malevolent entity.  For example, the vehicle attempts to nudge David’s Valiant onto railroad tracks as a locomotive crosses at full speed and even pursues David’s out-matched Valiant up a treacherous mountainside. When the truck plummets down the mountain, its death rattle sounds suspiciously like the cry of an angry dinosaur, not a lifeless vehicle.

The truck is a terrifying sight throughout the film, and Spielberg accents its monstrous, out-sized appearance with his visual compositions. At one point, the truck pulls up so close to the camera lens that the vehicle squeezes out all other images, a sign of its dominance on and off the road. 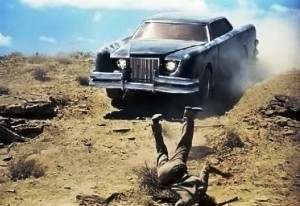 This highly-entertaining Jaws-knock-off involves a prowling, hunting black sedan that terrorizes the highways and back-roads of a sleepy southwestern town, Saint Ynez…at least until an heroic sheriff, played by James Brolin, tangles with it.

In this case, the black car is an avatar of pure evil. It cannot drive into a cemetery, for instance, because it cannot tread into sacred ground. And the car’s driver — or perhaps its dark soul itself — evacuates the vehicle when the automobile is trapped at the bottom of a canyon during the film’s climax.

In behavior, the car is unswervingly brutal, picking off bike riders and pedestrians, and even attacking a high school parade. Why it wants to kill innocent bystanders is a question that the film never really answers, but the black car itself remains a terrifying sight, a monstrous precursor to… 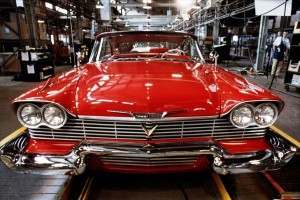 In this John Carpenter film based on the novel by Stephen King, a car that is “born bad” — a 1958 Fury – transforms its new 1980s owner, Arnie (Keith Gordon) into something powerful but monstrous, even as he restores her to cherry condition.

Unlike the other vehicles on this list, Christine can re-shape herself to squeeze down narrow alleys, or otherwise hunt its enemies….even without a driver.  Christine also projects a nasty, cunning intelligence by playing rock-and-roll songs that hint at her dark impulses.

When Christine flattens an interfering garage owner, for example, between her seat cushions and dashboard her radio plays “Bony Marrone.”  And when Arnie’s friend Dennis tries to break into the car, Christine replies with “Keep a Knockin’” by Little Richard.

Even the Arnie/Christine love story is represented by Christine’s fantasy music, “We Belong Together,” and the film’s final sting — that Christine lives even after a battle with a bulldozer — is accompanied by “Rock ‘N’ Roll is Here to Stay.”   These choices remind us that Christine is not only a rock-and-roll bad ass, but a malevolent entity who plans her murders, and through her choice of music, seems even to ironically comment upon them. 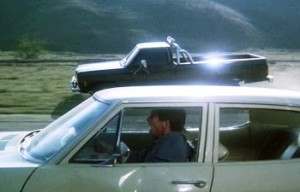 This underrated horror anthology from Joseph Sargent features a story called “The Benediction.” The third of four tales, this story stars Lance Henriksen as a fallen priest, Father Frank, who leaves his mission in the desert only to experience a deadly confrontation on the road with a pick-up truck driven by the Devil himself.

Here, the gentle priest is hounded by the villainous vehicle, and all we know for sure about his nemesis is that he has an upside down crucifix hanging under his rear-view mirror.

In the end, this demonic vehicle is stopped by Father Frank’s restored faith…and some handy holy water.  The story seems to re-assert the old truism that there are no atheists in foxholes, meaning that a life-and-death crisis can lead to a renaissance in belief.

Stephen King’s directorial debut is a much better horror film than many remember, and it involves Earth’s machinery coming to murderous life as the planet passes through the tail of a rogue comet, Rhea-M.

Among those machines come to life is a Happy Toyz Truck, which boasts a grinning face resembling the Green Goblin’s. This malevolent truck takes command of all the nearby vehicles and threatens a Dixie Boy Diner and Gas Station in Wilmington, North Carolina.  It actually enslaves the humans there (including Emilio Estevez, Pat Hingle, Laura Harrington and Yeardley Smith), making them pump gas for its hell-on-wheels army.

In the end, a rocket launcher kills the Happy Toys Truck and its glowing emerald visage, but not before our new vehicular overlord racks up an impressive body count. 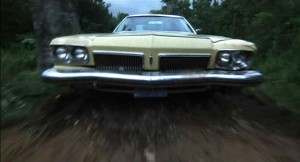 Finally, if I had to pick one good car with which to battle any of these road-raging monsters, I would select Sam Raimi’s Oldsmobile Delta 88.  He calls it “The Classic.”

Similarly, it housed kindly Uncle Ben (Cliff Robertson) in Spider-Man (2002), and was even the car of a gifted psychic (Cate Blanchett) in The Gift (2000).

Of course, the Classic’s ultimate loyalties may be murkier than I indicate. The same Delta 88 was also the car of the evil gypsy woman in Drag Me to Hell (2008).