On the 29 April 1939, four months before the start of WW2, Portsmouth beat the favourites Wolverhampton Wanderers 4-1 in the FA Cup Final. Subsequently, because of the war, the tournament was not held again until 1946. Without much else to crow about Portsmouth fans can always say their team have held the FA Cup longer than anyone else. These fabulous photographs from the 1938/1939 FA Cup competition. 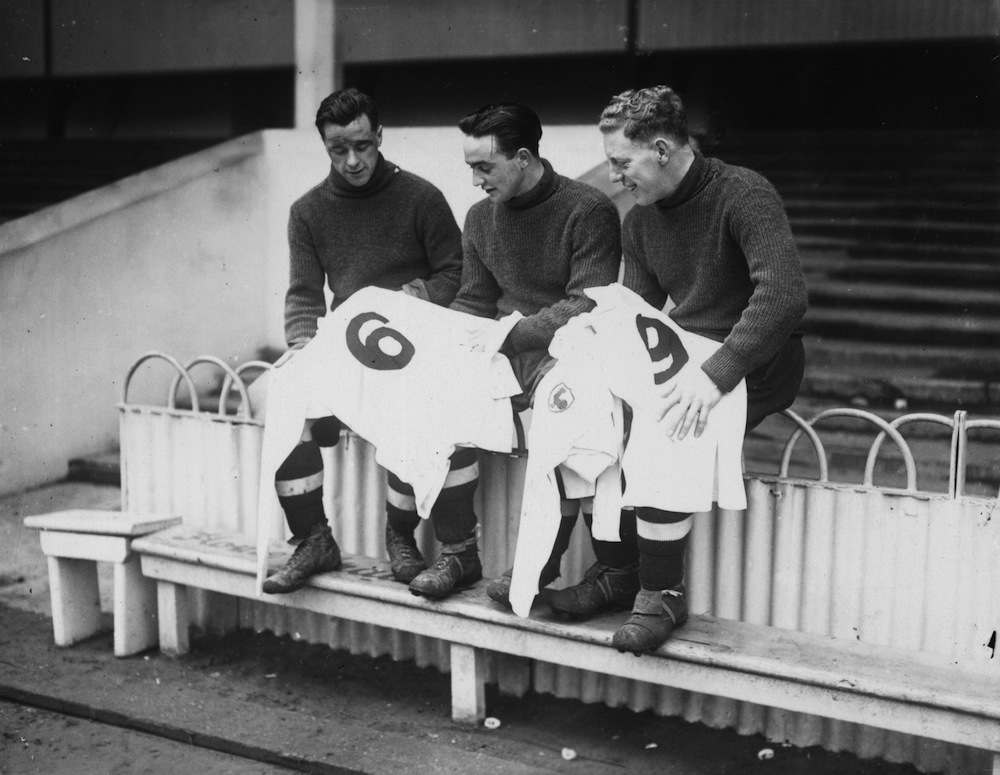 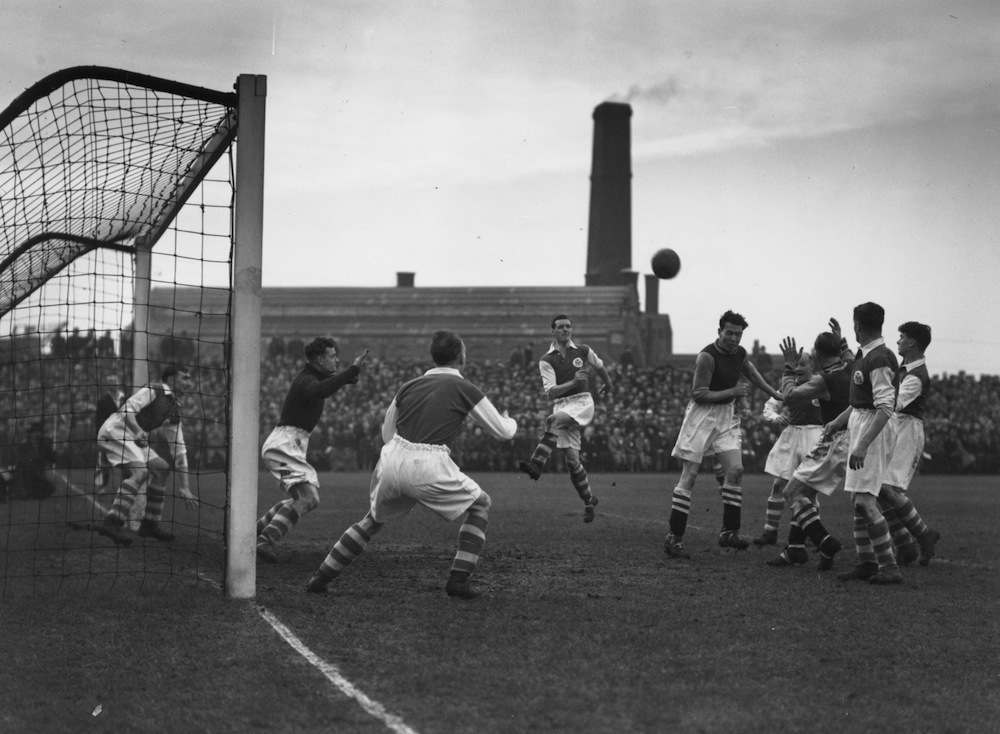 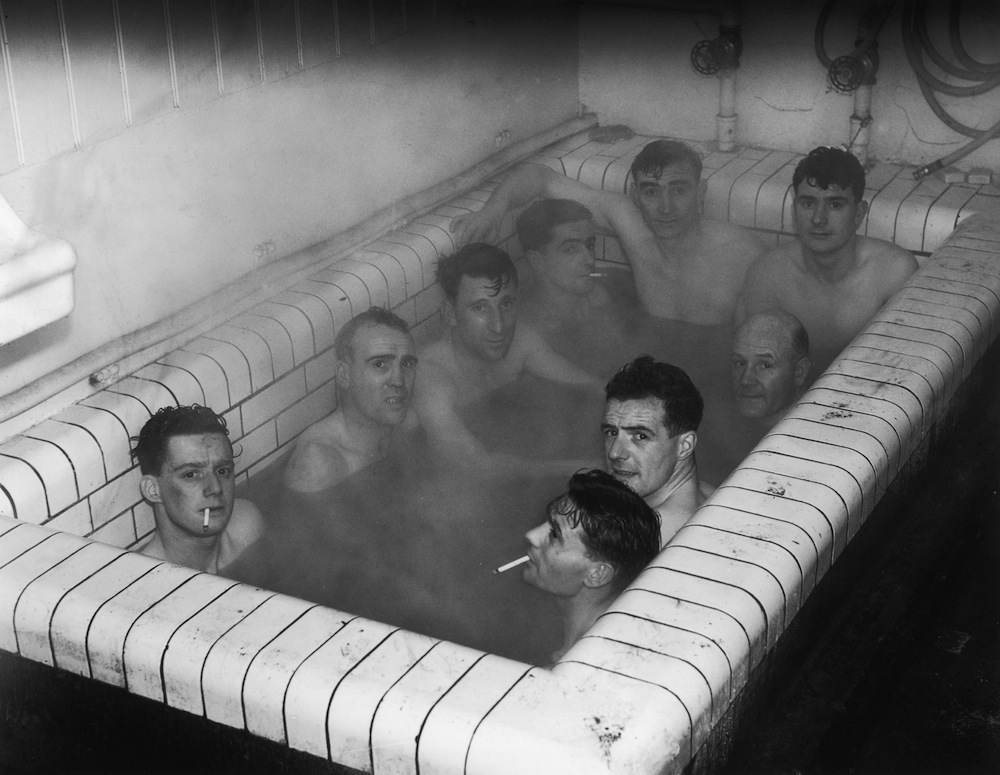 Ipswich Town football players having a bath together at Portman Road after the replay of their third round FA Cup match with Aston Villa, 11th January 1939. Villa won the tie 2-1 (Photo by London Express/Getty Images) 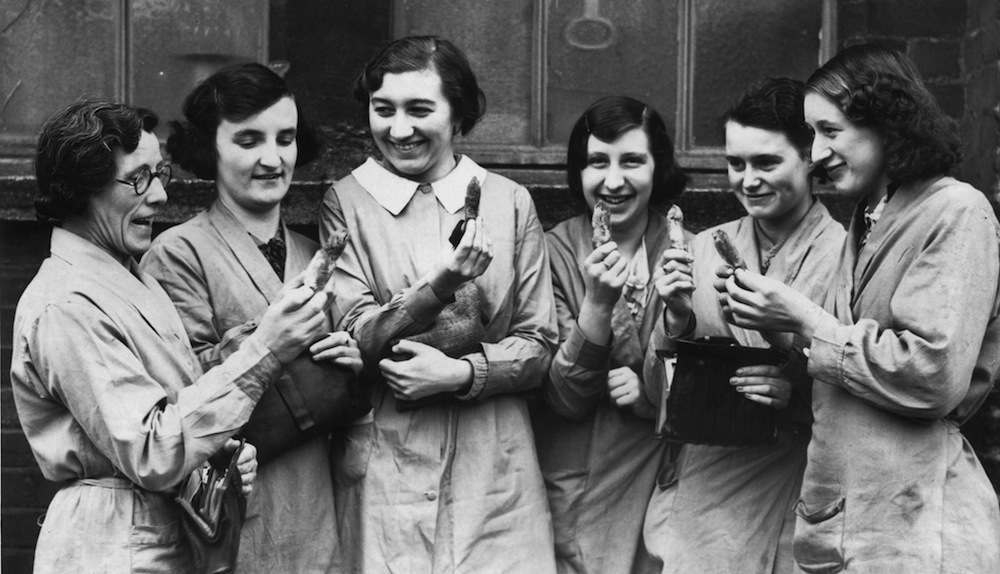 11th January 1939: Yeovil factory workers who support Yeovil football club, with their rabbits’ feet which they hope will bring their team luck in their FA cup match against Sheffield Wednesday . (Photo by Alan Webb/Fox Photos/Getty Images) 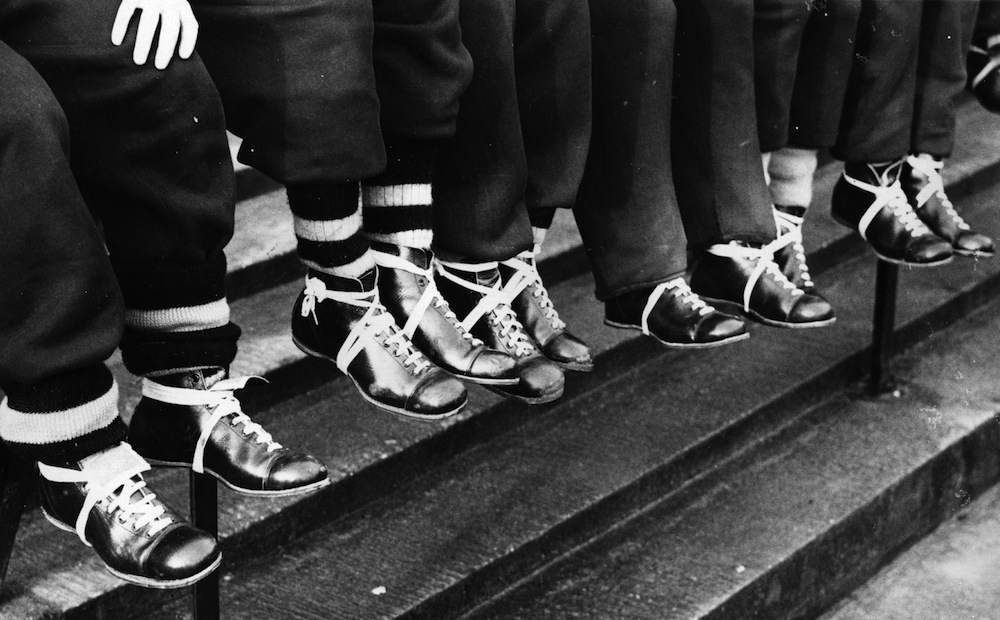 19th January 1939: Wolverhampton Wanderers are favourites for the FA Cup in 1939. Here the team display their clean boots. (Photo by Fox Photos/Getty Images) 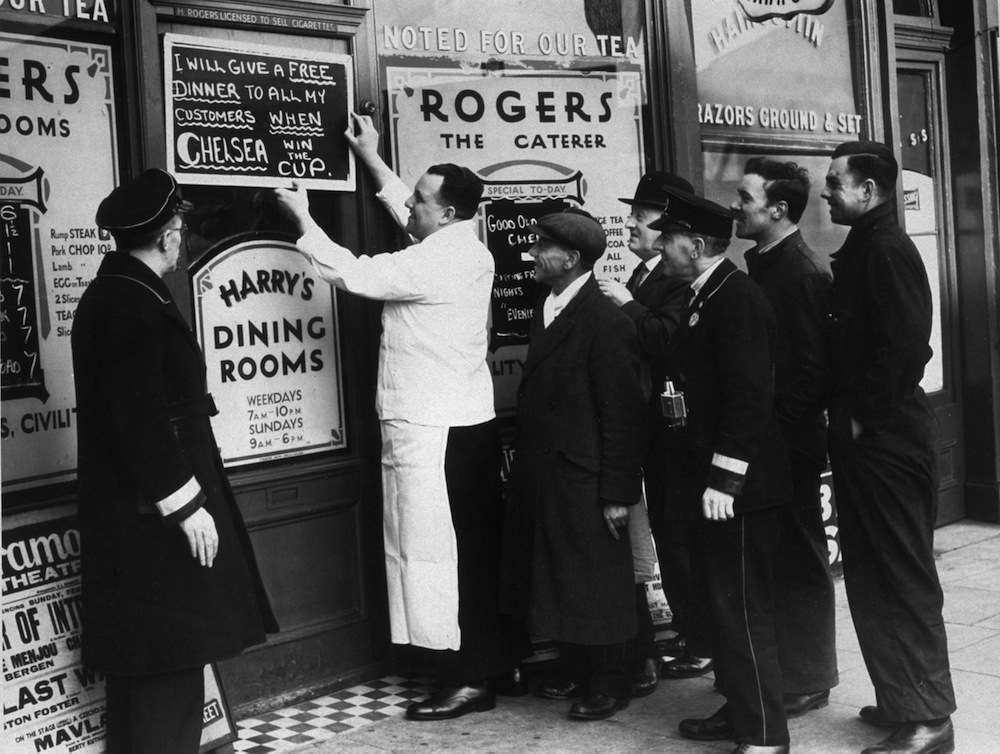 circa 1939: Mr Roger, the proprietor of a restaurant on the Chalk Farm Road, London, putting up a notice announcing that he will give free meals to all his customers if Chelsea win the FA Cup. (Photo by Fox Photos/Getty Images) 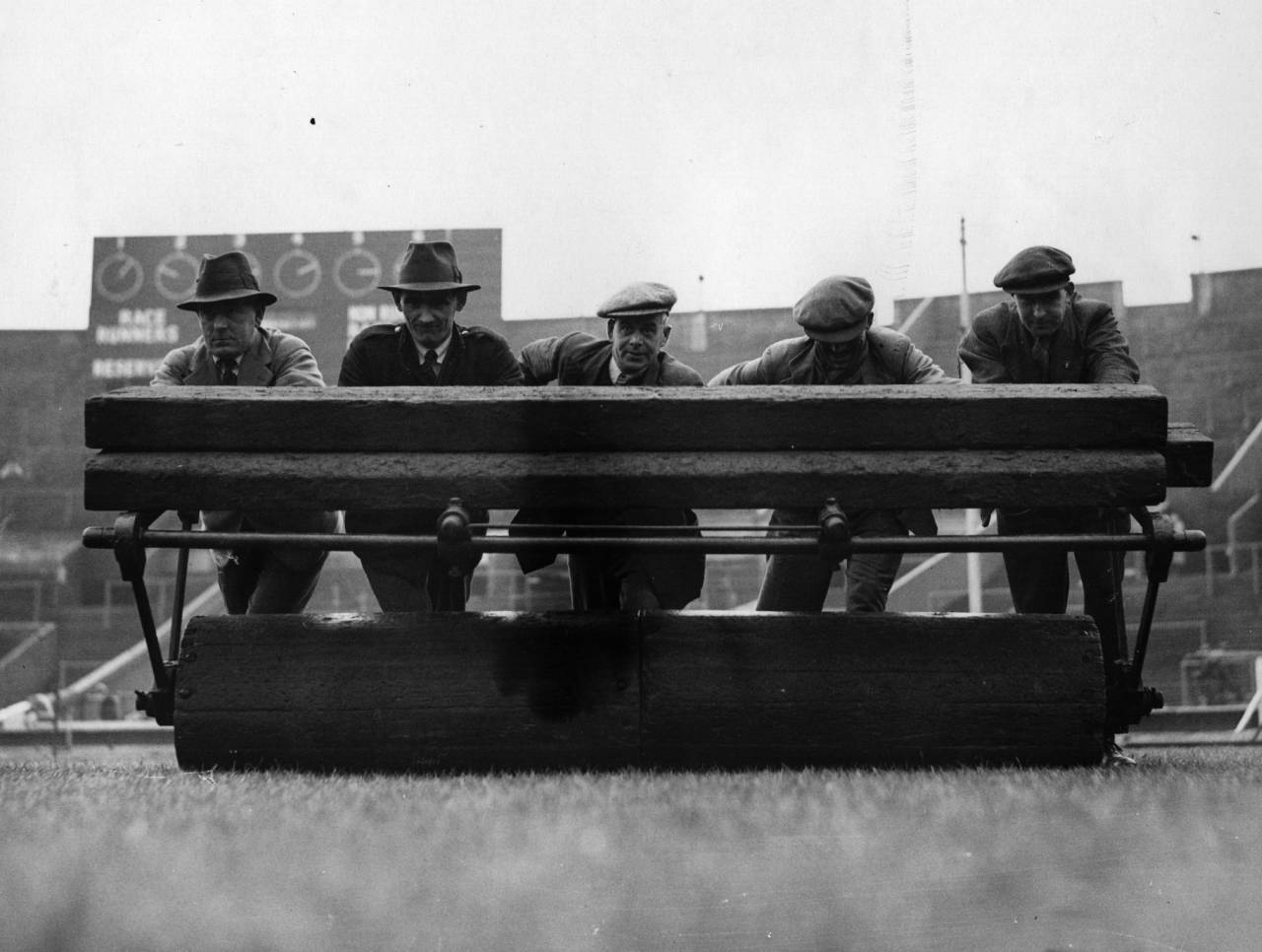 18th February 1939: Groundstaff at Wembley Stadium roll the pitch as part of the months of preparations for the FA Cup Final. (Photo by Fox Photos/Getty Images) 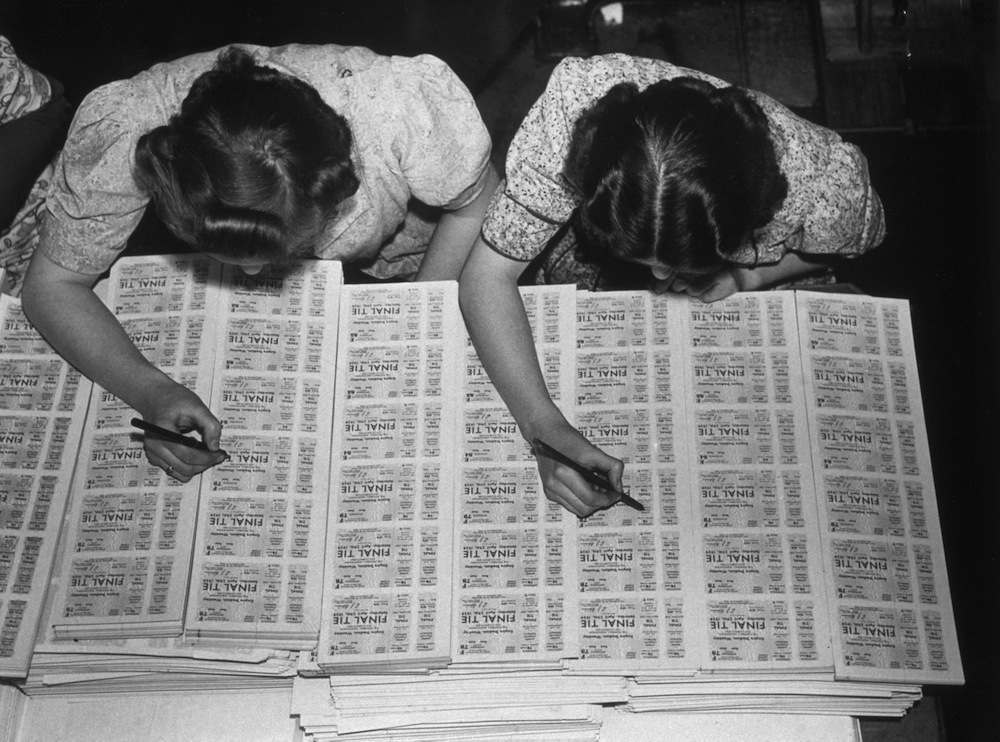 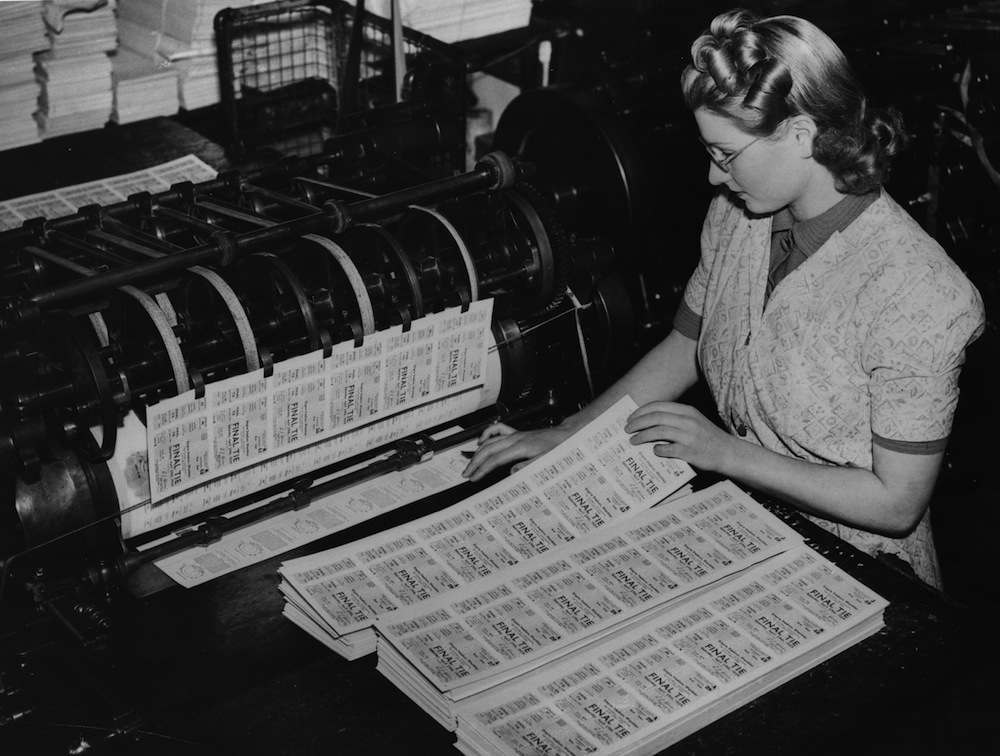 6th February 1939: A young woman checks tickets for the FA Cup Final as they come off the press. (Photo by Fox Photos/Getty Images) 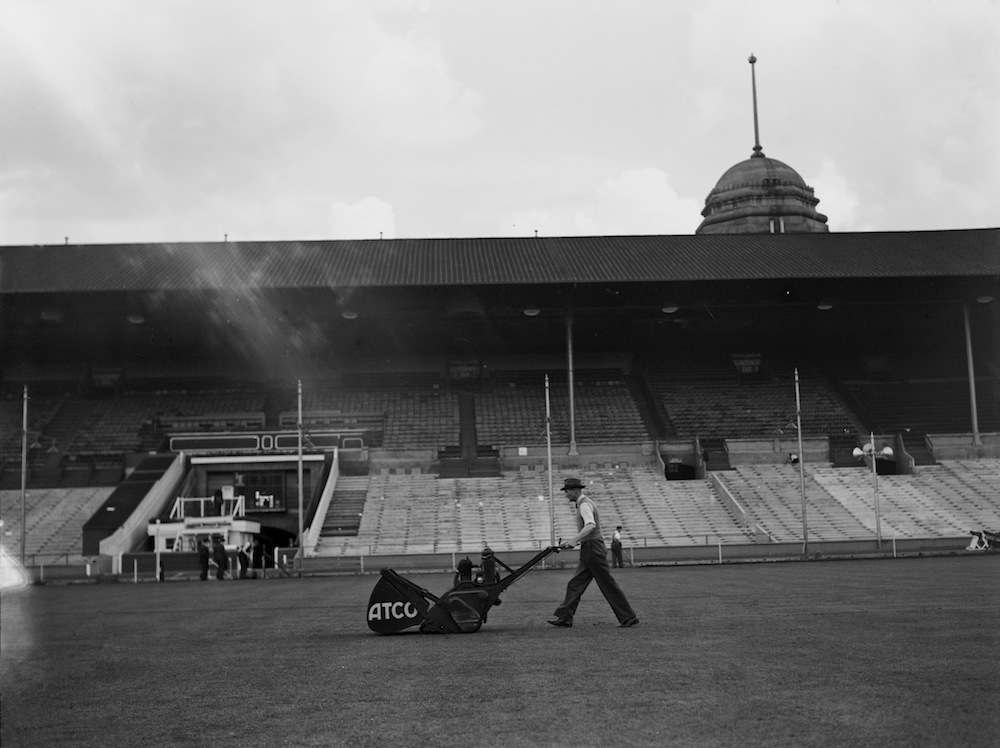 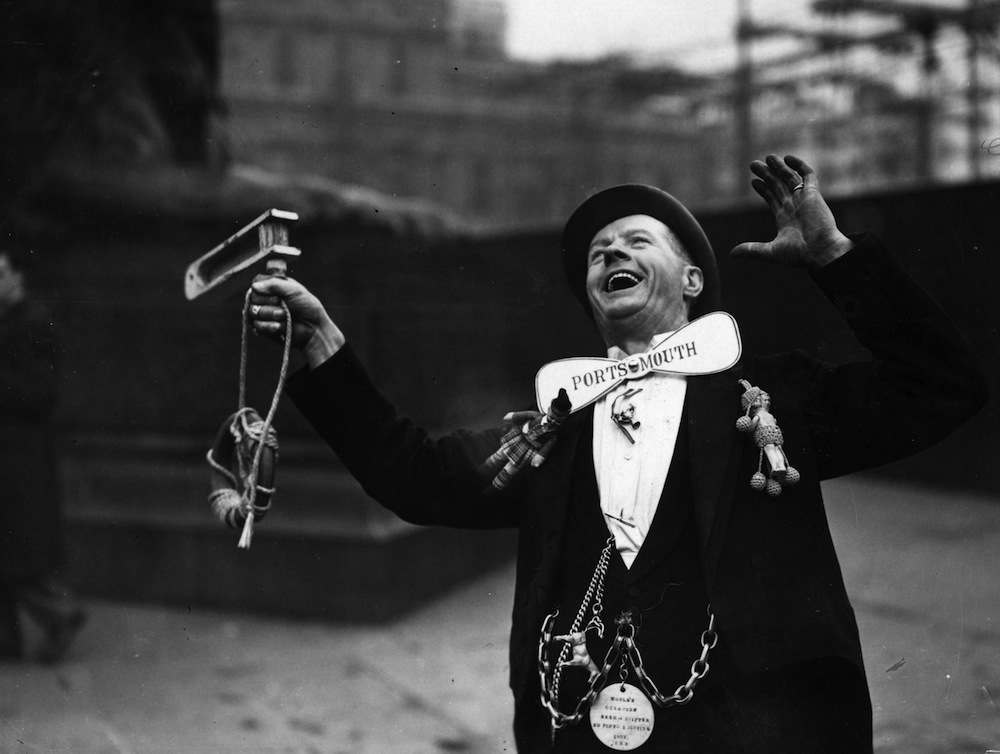 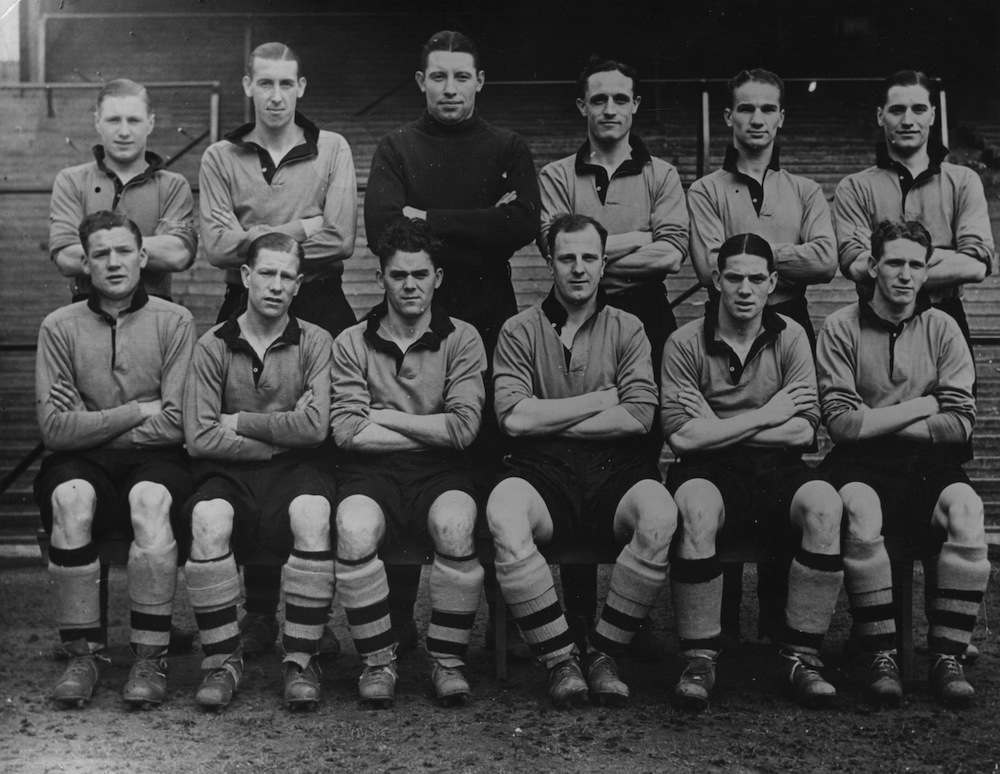 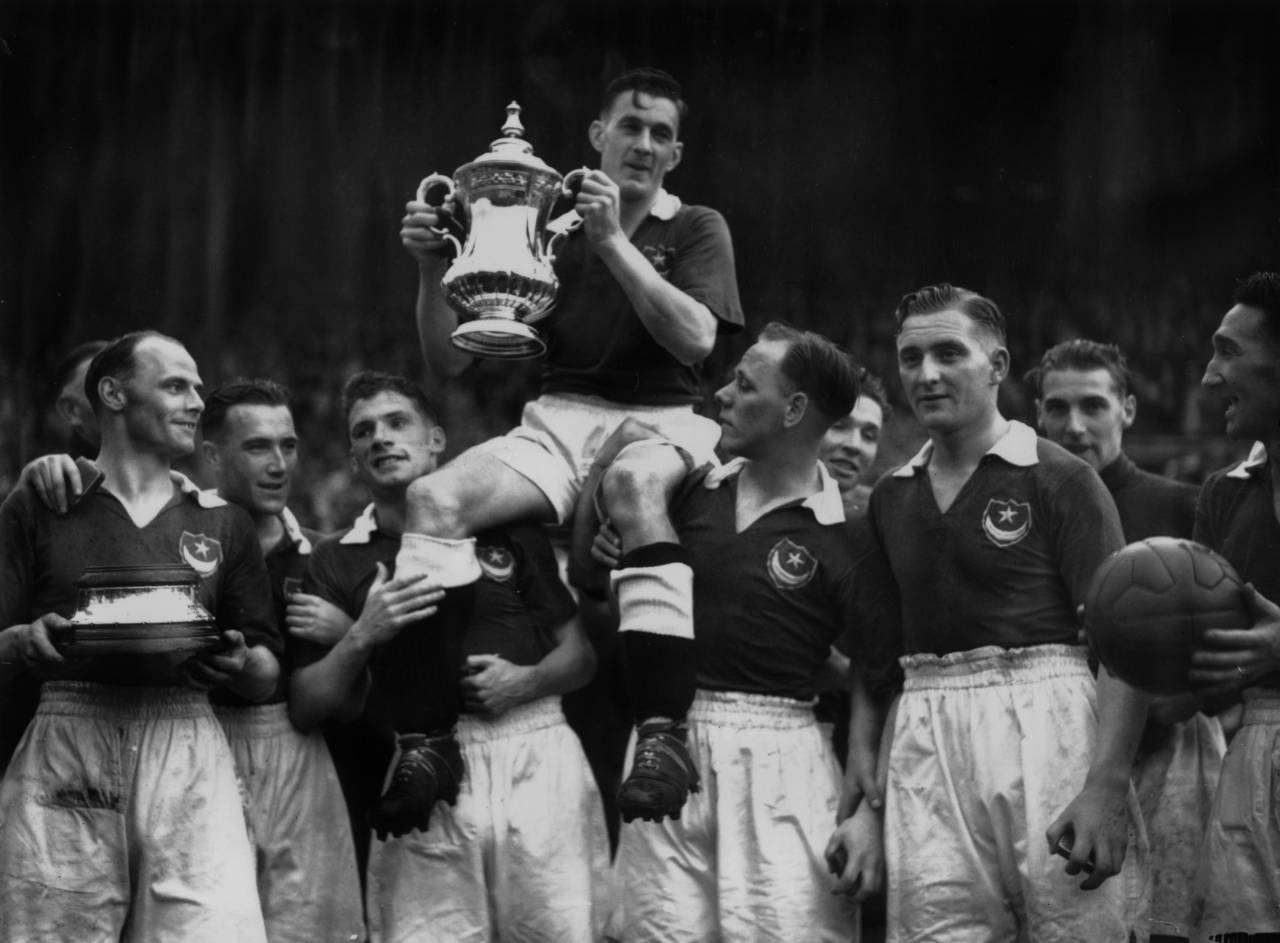 5th June 1939: Jimmy Guthrie, the Portsmouth captain, being carried by his team mates after winning the FA Cup final. (Photo by Keystone/Getty Images) 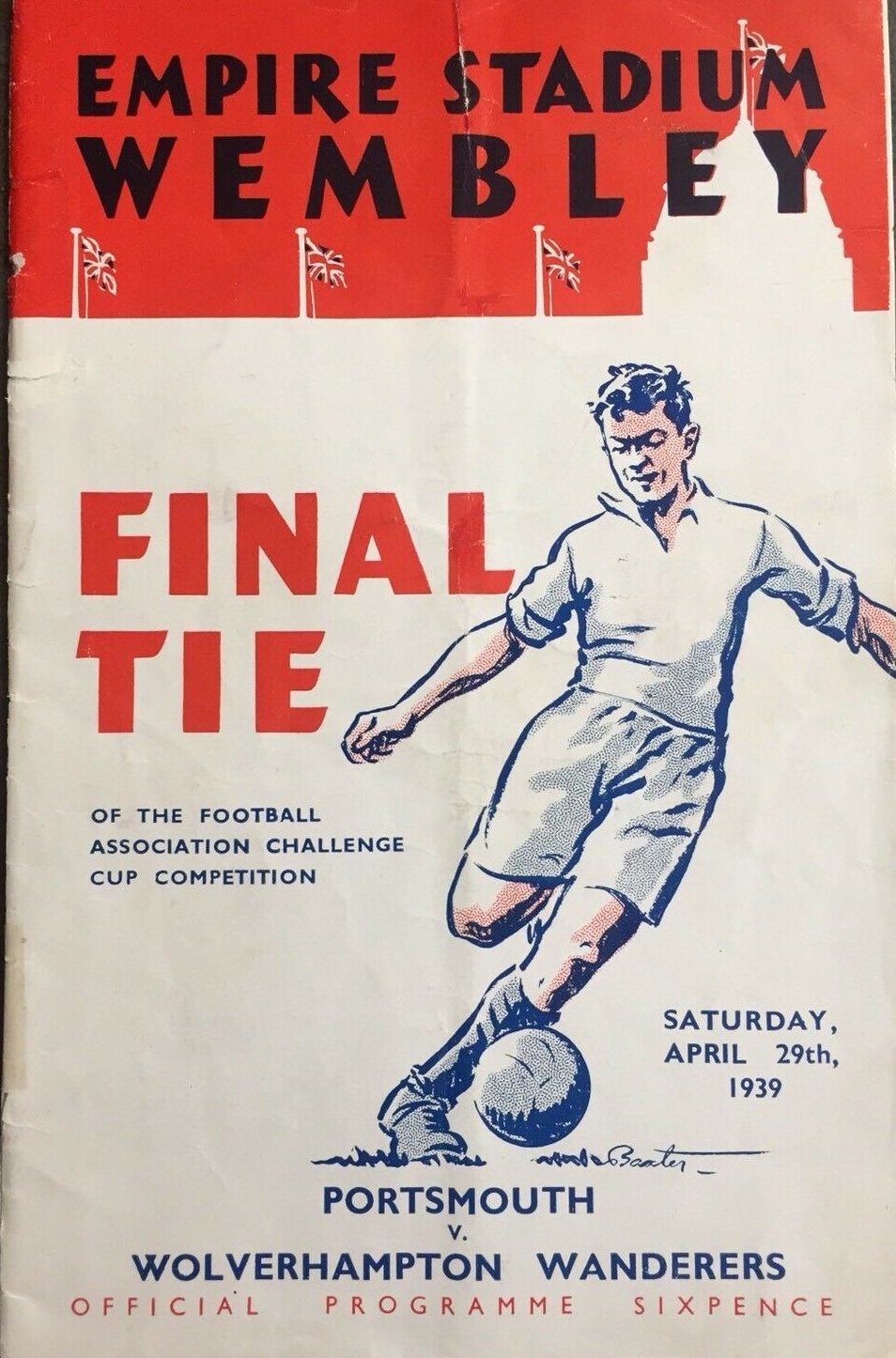 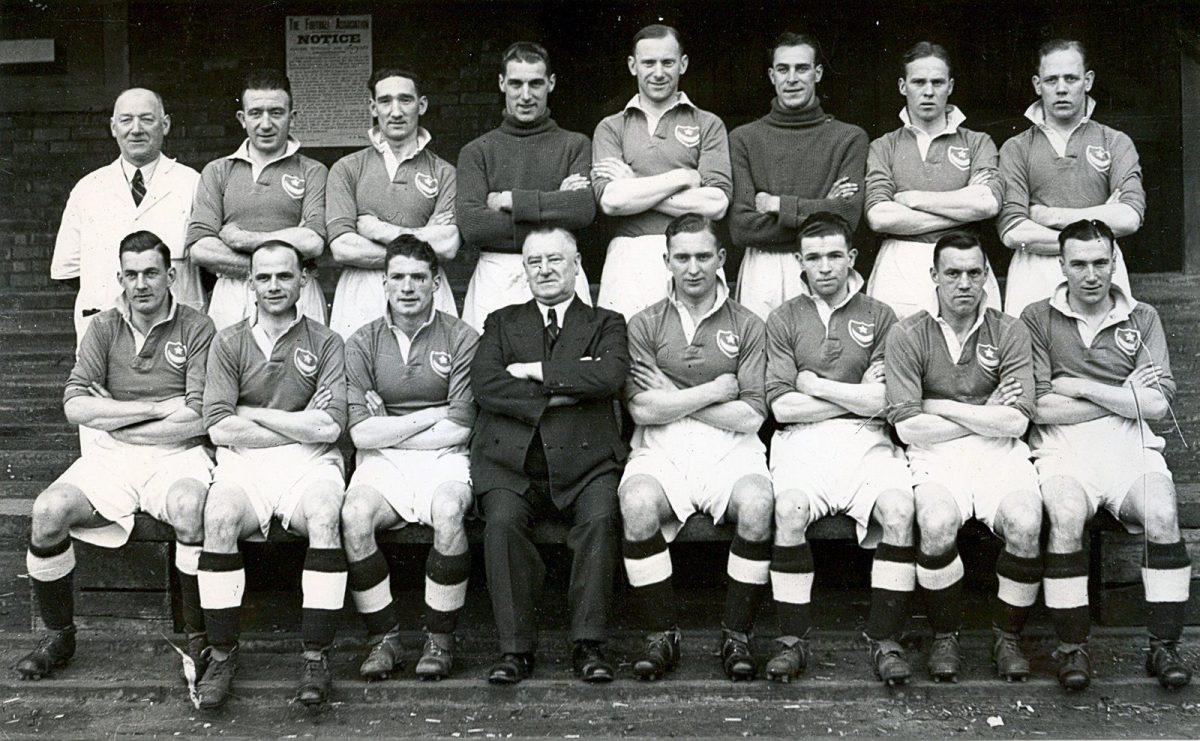 According to Wikipedia: When World War II began in September 1939, this caused the 1939 FA Cup champions Portsmouth to hold the distinction of holding the FA Cup trophy for the longest uninterrupted period – seven years – as the FA Cup competition was not held again until the end of World War II. Portsmouth manager Jack Tinn was rumoured to have kept the FA Cup trophy ‘safe under his bed’ throughout the duration of the war, but this is an urban myth. Because the naval city of Portsmouth was a primary strategic military target for German Luftwaffe bombing, the FA Cup trophy was actually taken ten miles to the north of Portsmouth, to the nearby Hampshire village of Lovedean, and there it resided in a quaint thatched roof country pub called The Bird in Hand for the duration of the war. 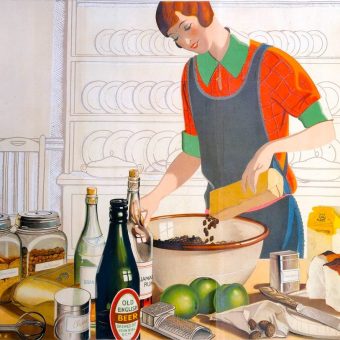