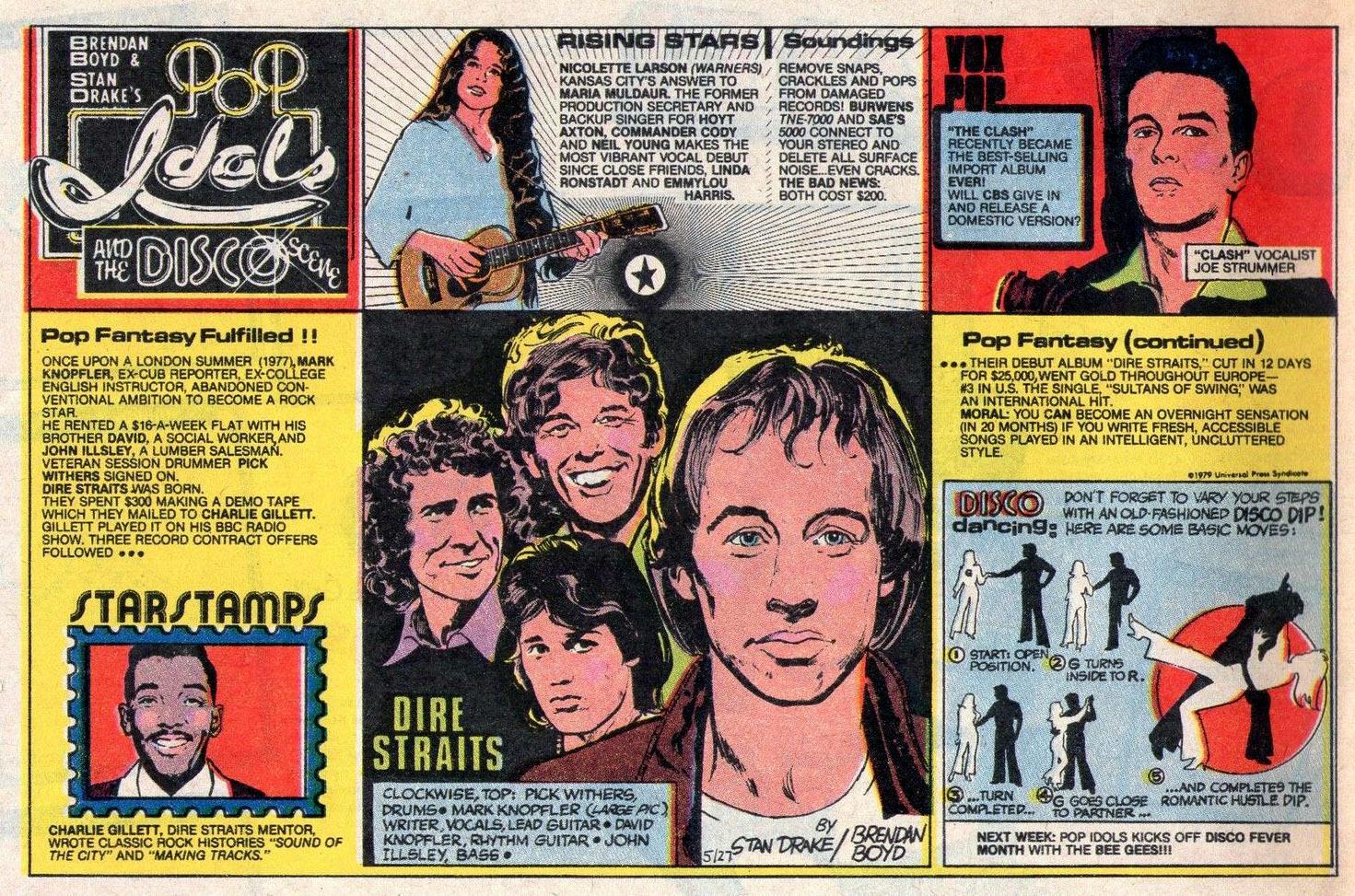 You simply can’t find a better time capsule for the disco age than Pop Idols and the Disco Scene which ran from 1976 to 1970 in Sunday newspapers.  Each week, Stan Drake and Brendan Boyd brought you everything from disco steps to pop star biographies right next to your Doonesbury and Wizard of Id.   Here is a sampling from the grand old year of 1979.  Enjoy. 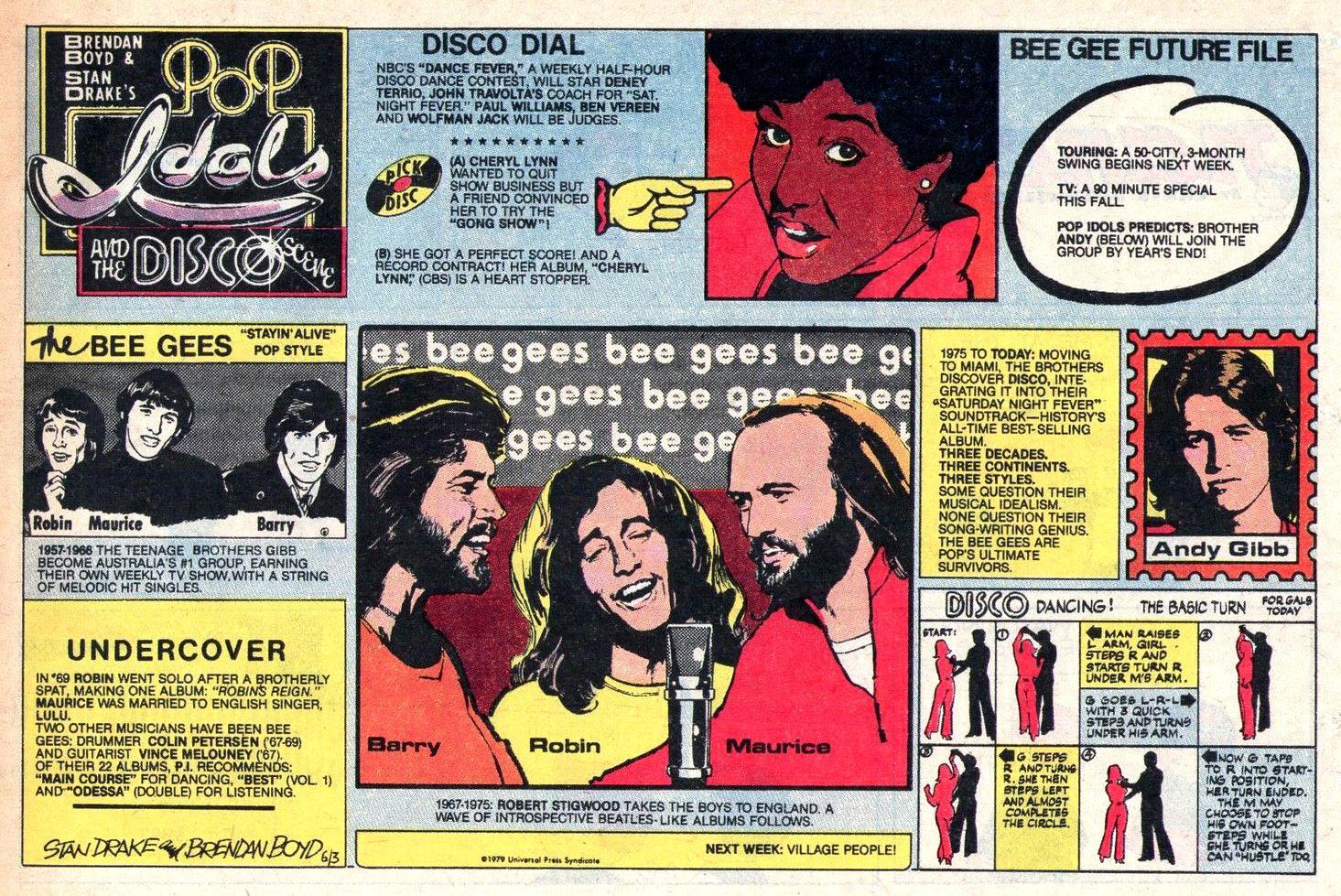 Historic events are catalogued in this Sunday’s edition: Cheryl Lynn is discovered on The Gong Show and “Dance Fever” is about to premier.  I don’t know about you, but Deney Terrio’s show was a must-watch in the Yeoman Lowbrow household. 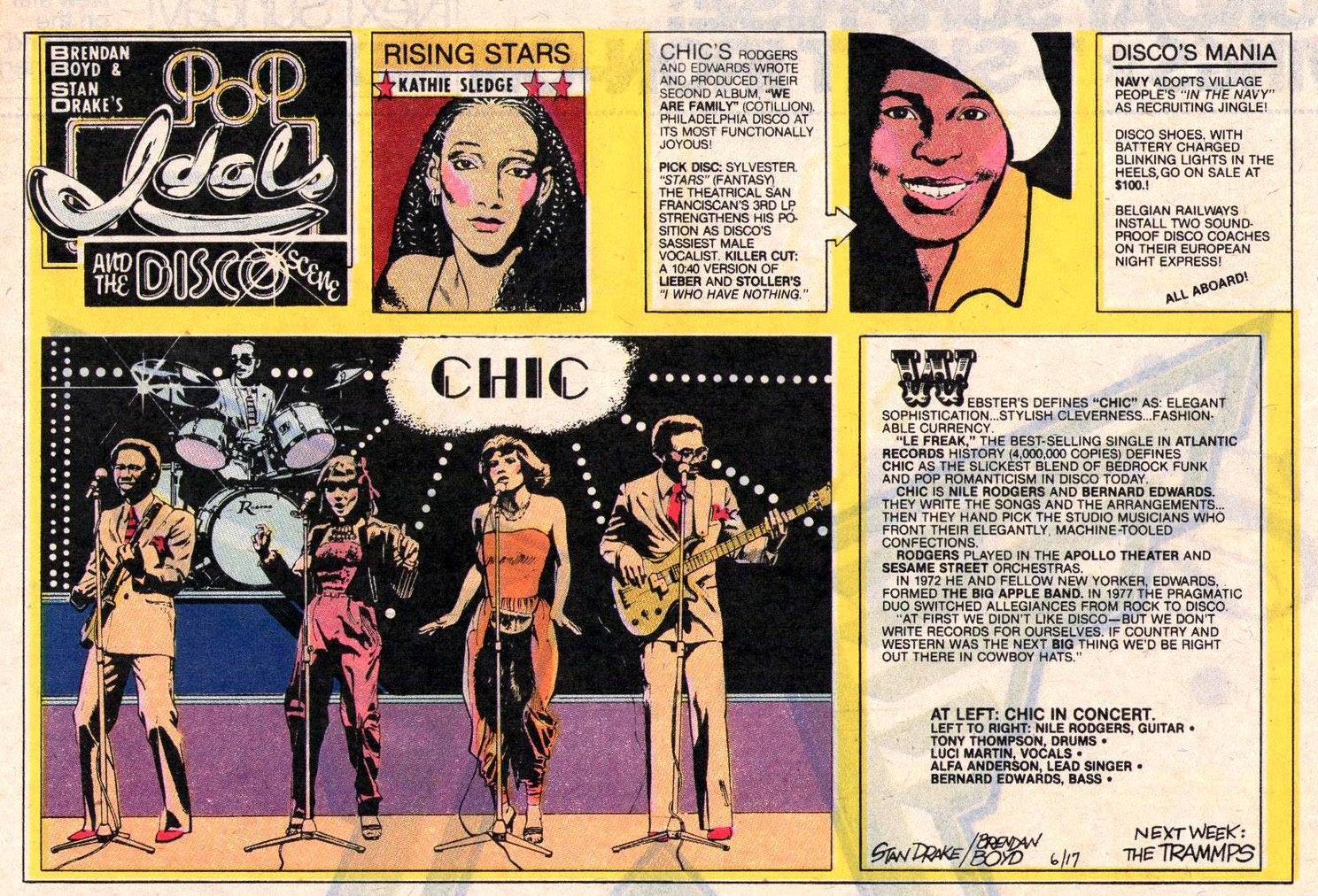 I’d say Sylvester’s characterization as the “sassiest” male vocalist is pretty apt.  However, I’m more interested in those battery powered disco shoes – sure to make you the center of attention at your local discotheque. 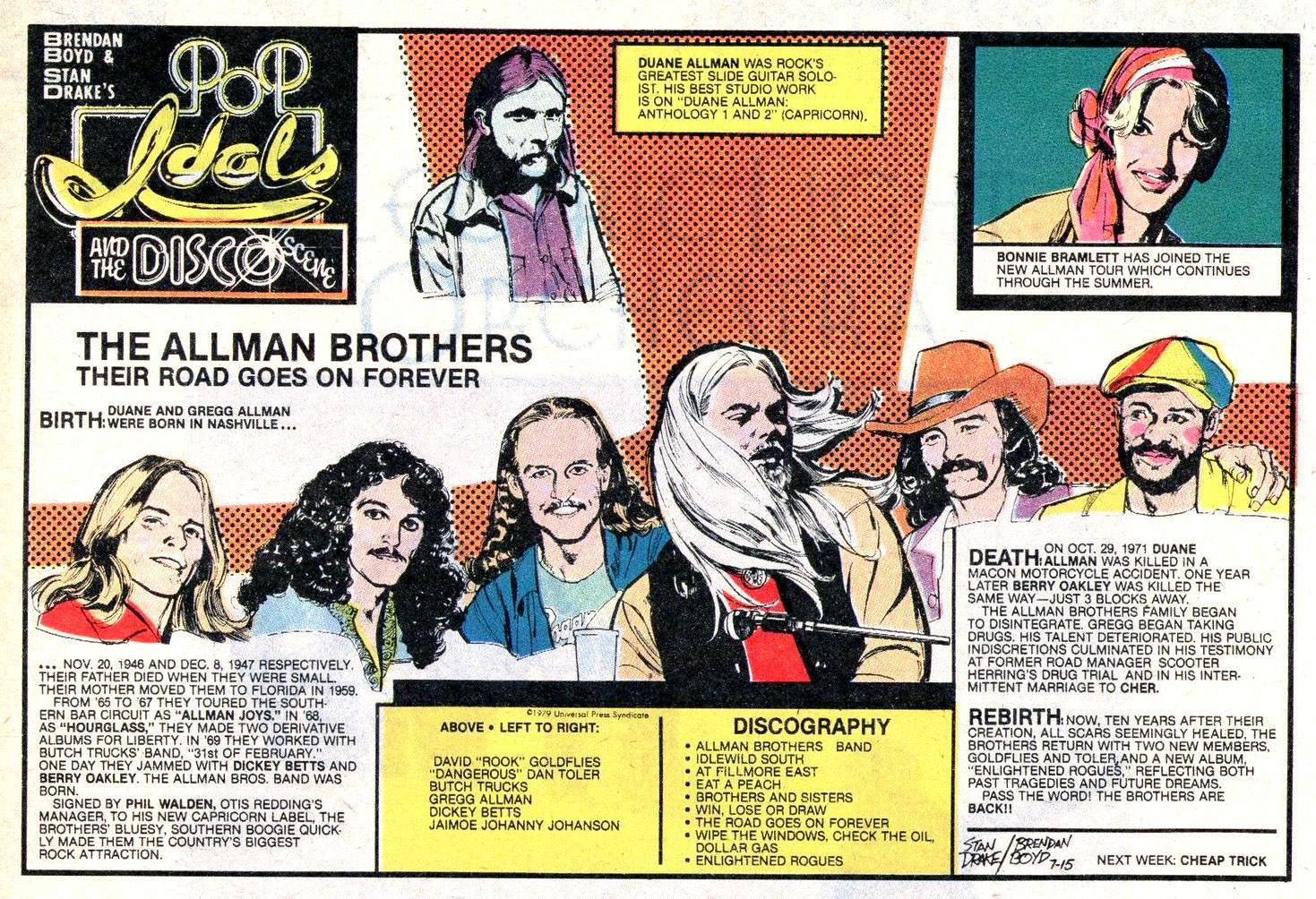 A bit odd to see something so disco-centric focus on the Allman Brothers.  The 1970s were nothing if not eclectic – it wouldn’t be strange at all to catch a Sabbath concert one week and KC & the Sunshine Band the next.   Your average 8-track collection could contain both The Allman Brothers and the Commodores , and there was nothing wrong with that. 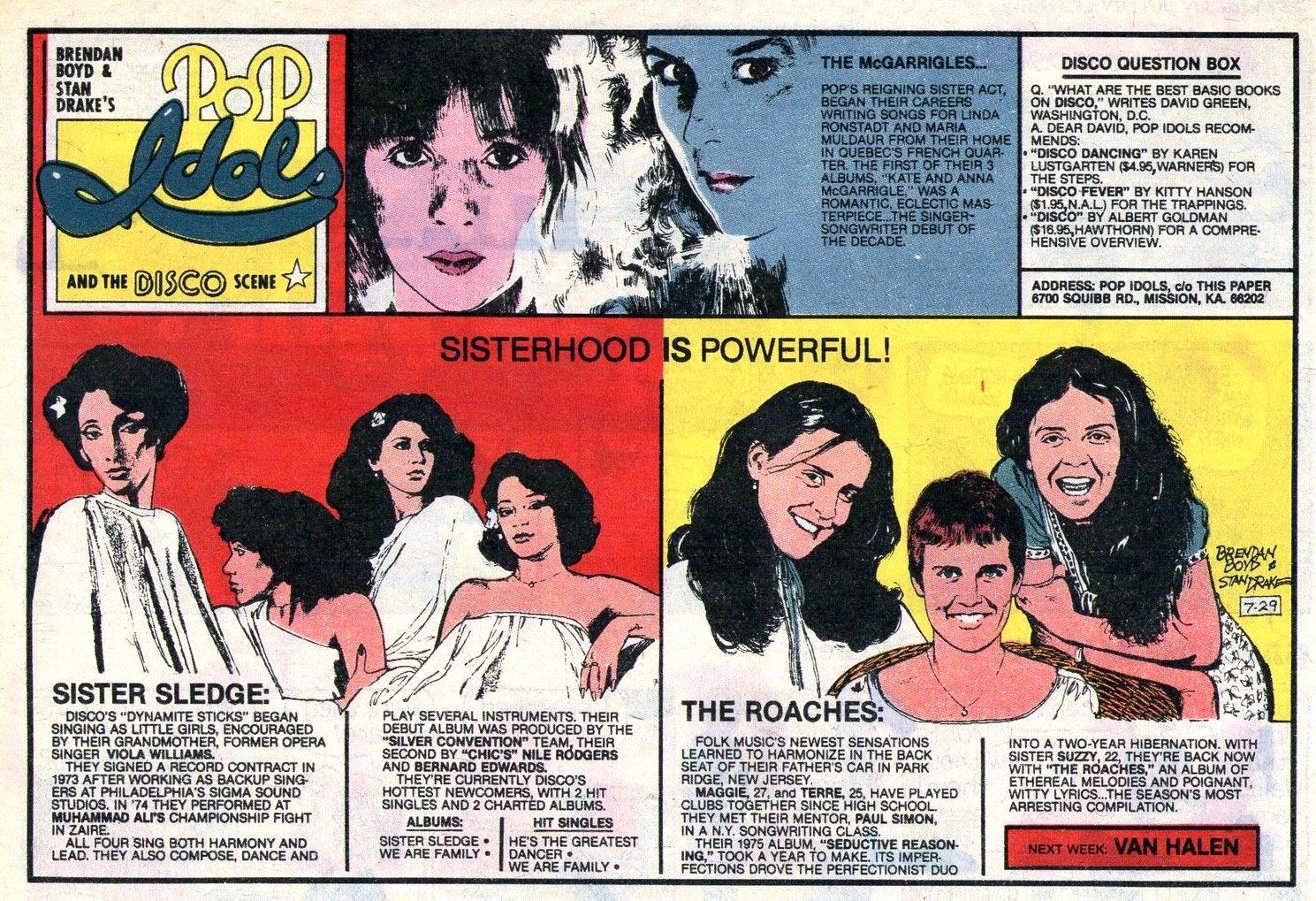 It just seems impossibly bizarre that The Roaches are featured in the Sunday funny pages.  Suffice it to say, it was an interesting time. 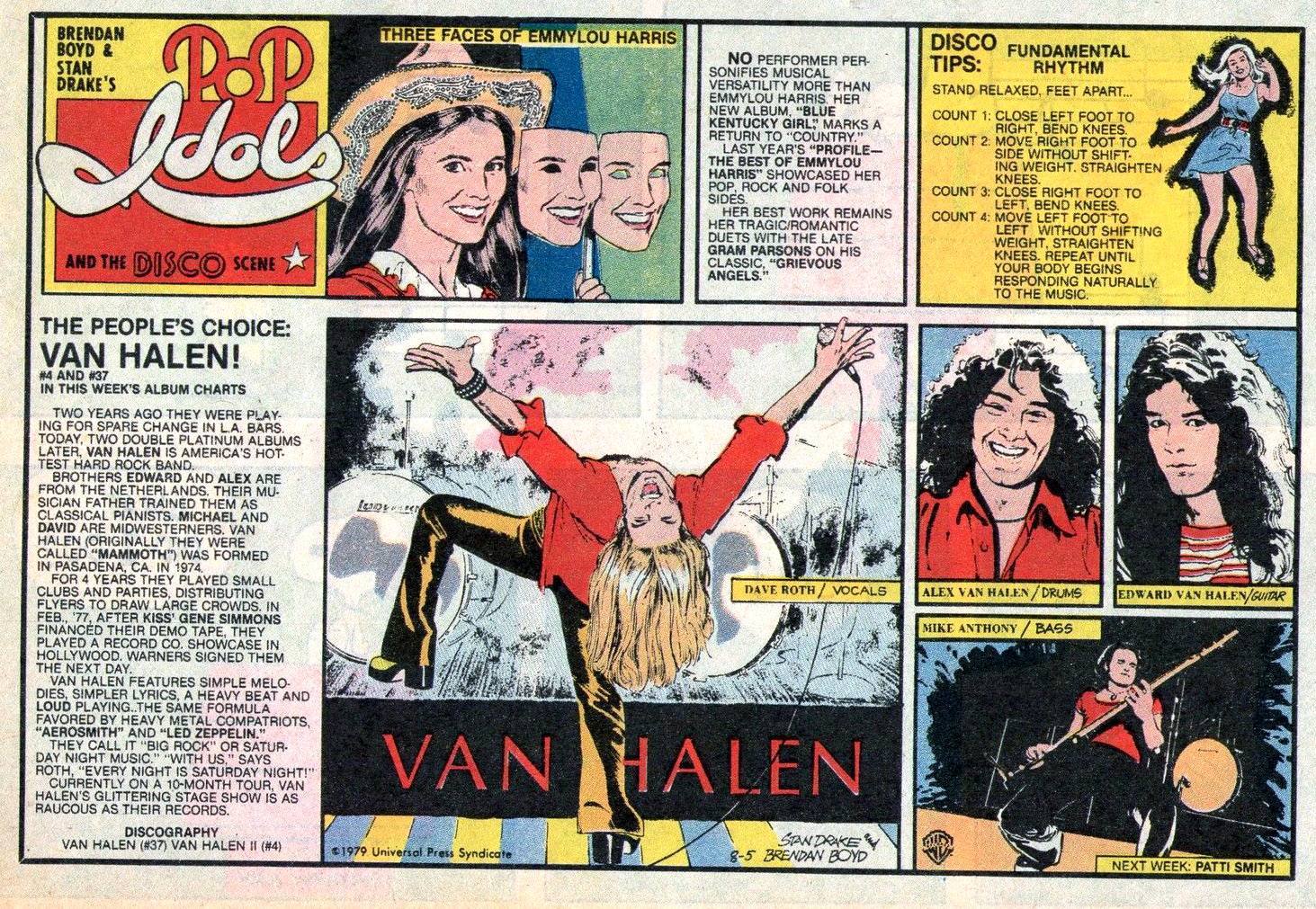 I love how they’re called “Dave Roth” and “Edward Van Halen”, and  I never knew Van Halen owed their start to Gene Simmons’ good will.  This comic is pure gold. 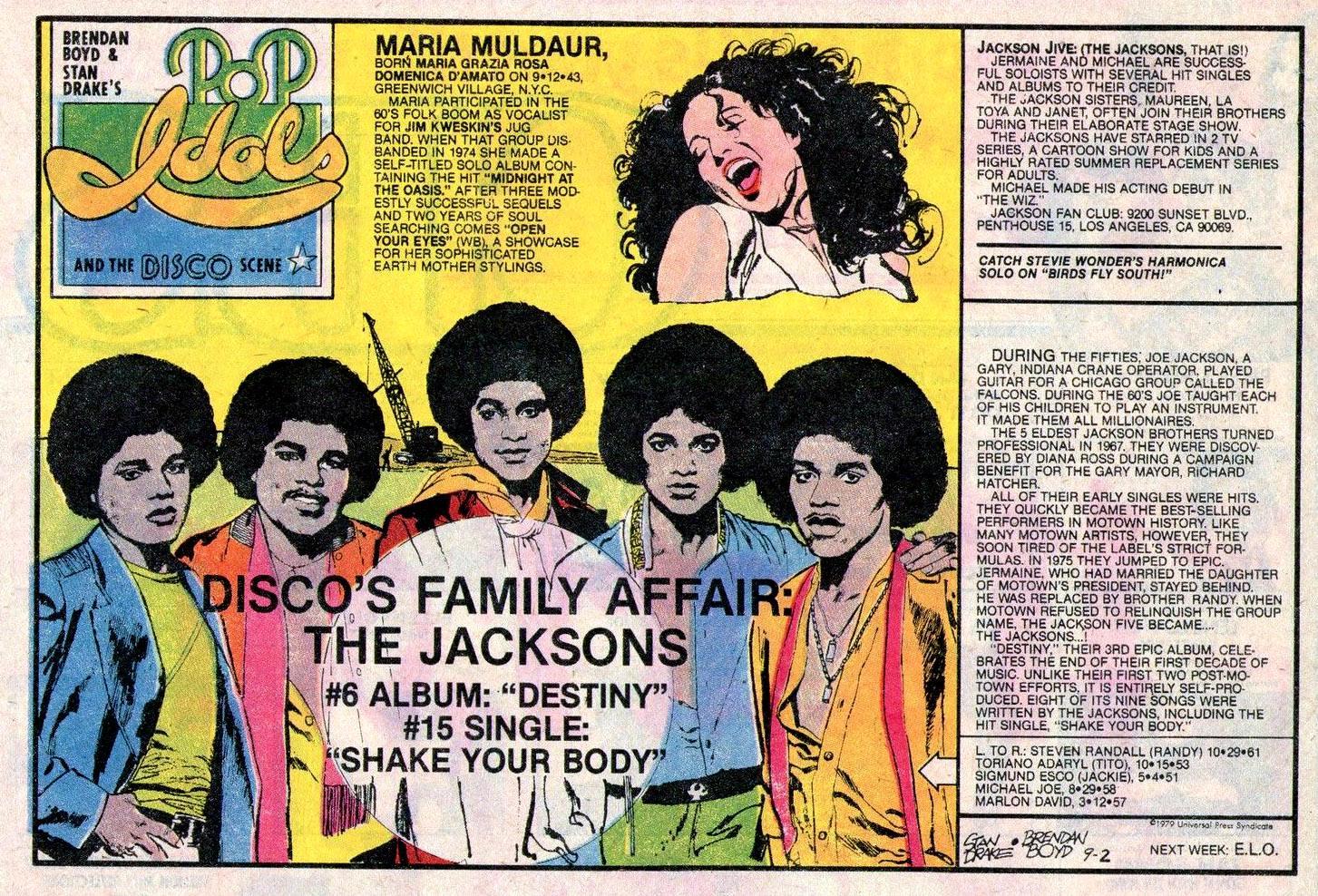 Interesting how Michael and Jermaine are basically put on equal footing as the two breakout solo artists of the group.  I’m unfamiliar with the Jackson’s summer replacement series for adults – anyone remember this? 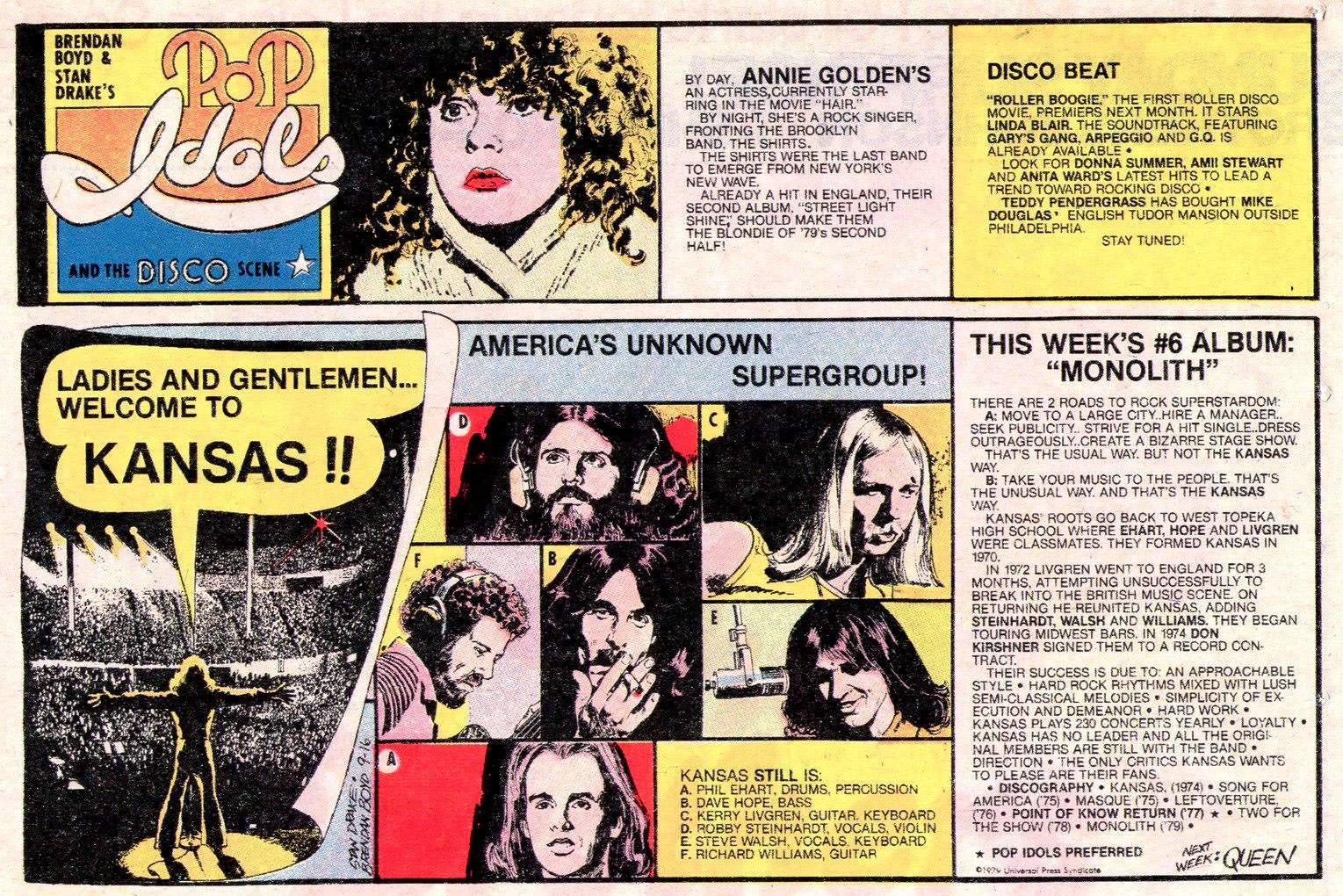 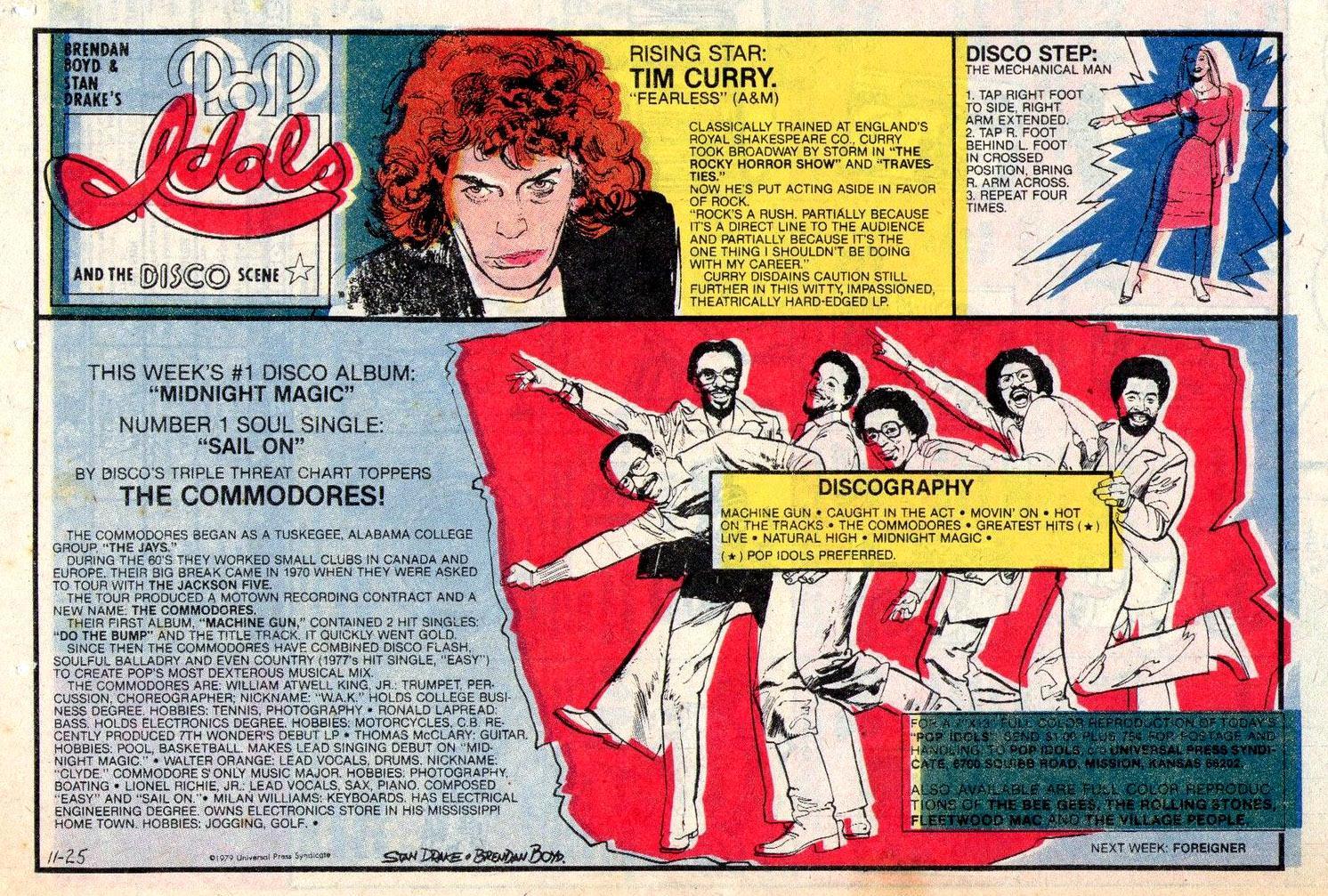 In which we learn that rising star, Tim Curry, is forgoing his acting career in favor of being a rock star. 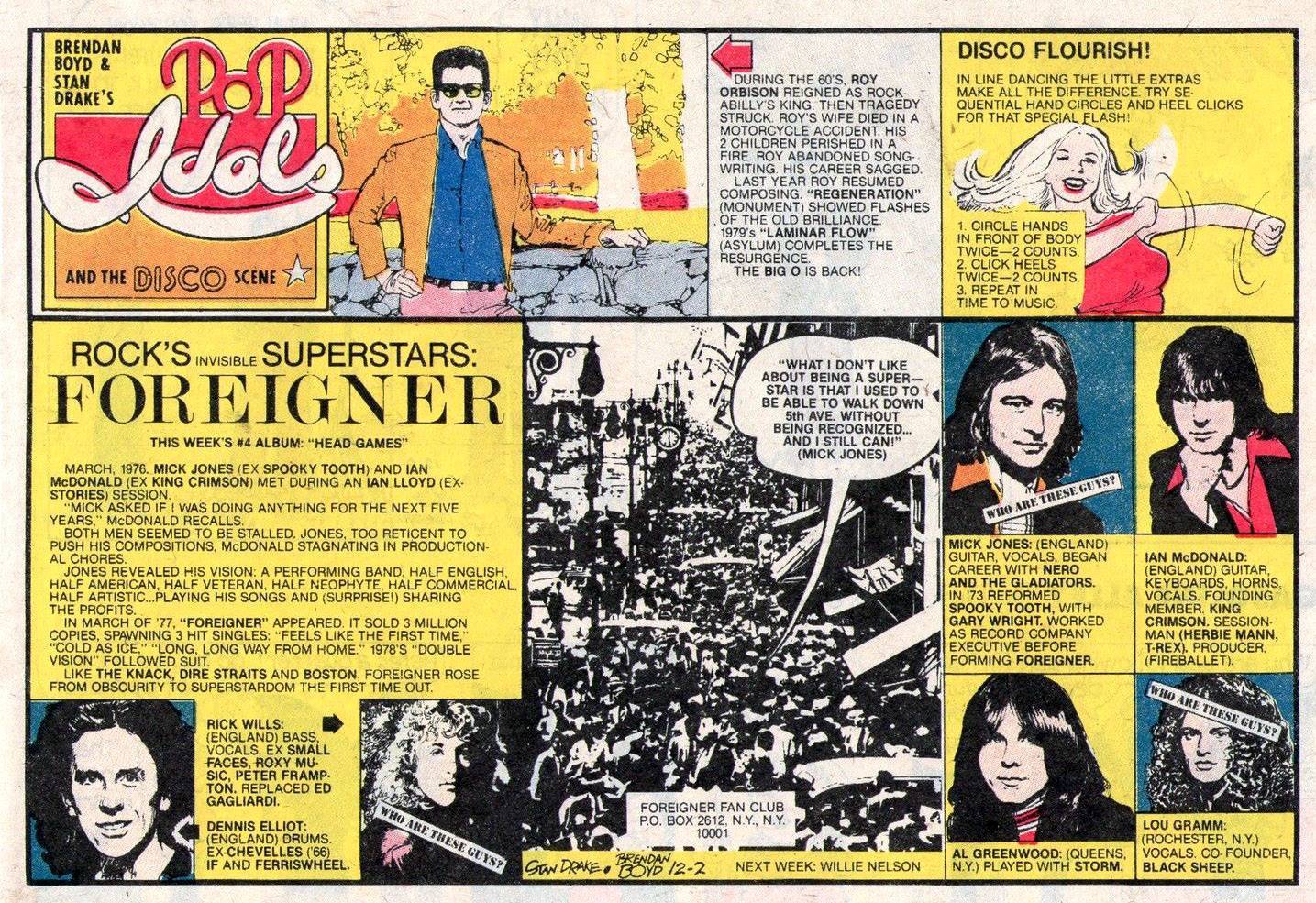 Before we go, a word about Stan Drake, the illustrator for these comics (I have no clue about Brendan Boyd, the writer).  Stan Drake’s work was everywhere in the 1950s-70s- appearing in adverts, pulp magazines and even comic books (ex. She-Hulk) before landing the gig of illustrating the Blondie comics in 1984.  He is the man behind the strip The Heart of Juliet Jones (a romantic serial strip you probably have never heard of, but was fairly popular in the 1950s).  He did a lot of golfing illustrations for books and magazines (ex. Golf Digest) and was an avid golfer himself.  It seems a bit odd that this guy would be providing illustrations of Foreigner and Kansas, but I’d say he did an admirable job.  Stan Drake RIP 1997.