“The mask is the same in appearance, as it should be for a traditional character; yet a wholly original wit sends the grimaces wrinkling across it. Deburau is young, thin, elegant; his features are delicate and distinct, his eyes expressive — and his little mouth, which he knows how to distend to swallow the bigger morsels, has a kind of jeering disdain, an English ‘sneer’, that is very piquant. A clown’s agility animates this slender body, with its delicate limbs, on which the white blouse with its big buttons floats freely; he moves with ease, suppleness, and grace, marking without stressing the rhythm of the music…’ 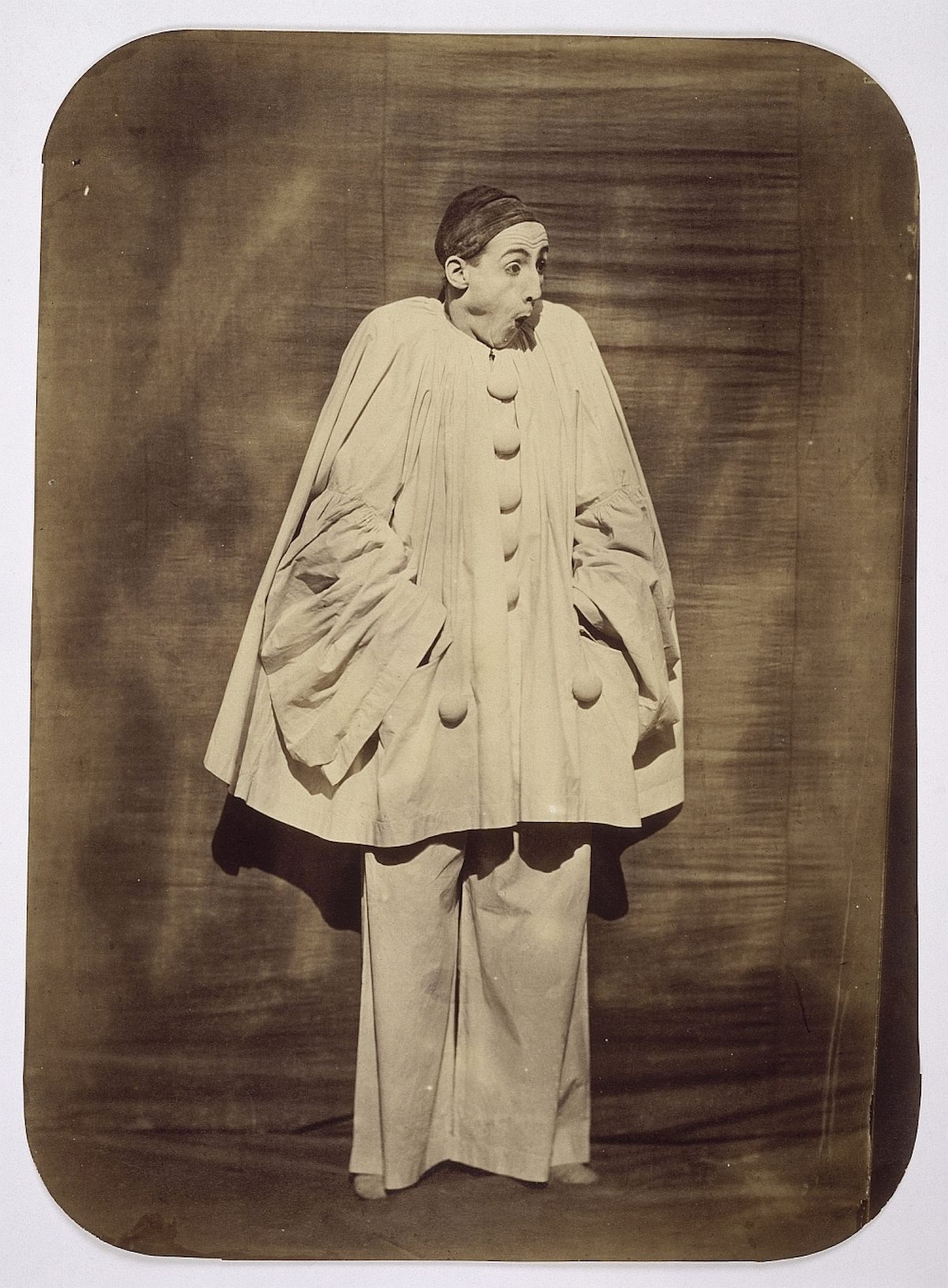 Jean-Charles Deburau (February 15, 1829 – December 19, 1873) was a French mime artist of no little pedigree. His father was Jean-Gaspard Deburau (31 July 1796 – 17 June 1846) hymned as Baptiste the Pierrot in Marcel Carné’s gorgeous film Children of Paradise (1945) – the film tells the story of a courtesan and four men — a mime, an actor, a criminal and an aristocrat — who love her in different ways. (Duburau was acquitted of murder in 1836 after hitting a child in the street for the offence of  muddling the actor’s true self with his stage persona clown and addressing him as ‘Pierrot’.)

To French poet Charles Baudelaire (9 April 1821 – 31 August 1867), Pierrot appeared “pale as the moon, mysterious as silence, supple and mute as the serpent”, a figure who has been “degraded by his misery and the ingratitude of the public, into whose booth the forgetful world no longer wants to enter”.

After his father’s death, Charles kept alive his pantomimic legacy, first in Paris, at the Théâtre des Funambules, and then, beginning in the late 1850s, at theaters in Bordeaux and Marseille. He is credited with founding a southern “school” of pantomime; indeed, he served as tutor to the Marseille mime Louis Rouffe, who, in turn, gave instruction to Séverin Cafferra, known simply as “Séverin”. But their art was nourished by the work of other mimes, particularly of Charles’s rival, Paul Legrand, and by earlier developments in nineteenth-century pantomime that were alien to the Deburaux’ traditions.

This series of photos of Charles as Pierrot was taken by Félix Tournachon (5 April 1820 – 20 March 1910) in 1855, known by the pseudonym Nadar, a French photographer, caricaturist, journalist, novelist, balloonist, and proponent of heavier-than-air flight. In 1858, he became the first person to take aerial photographs. 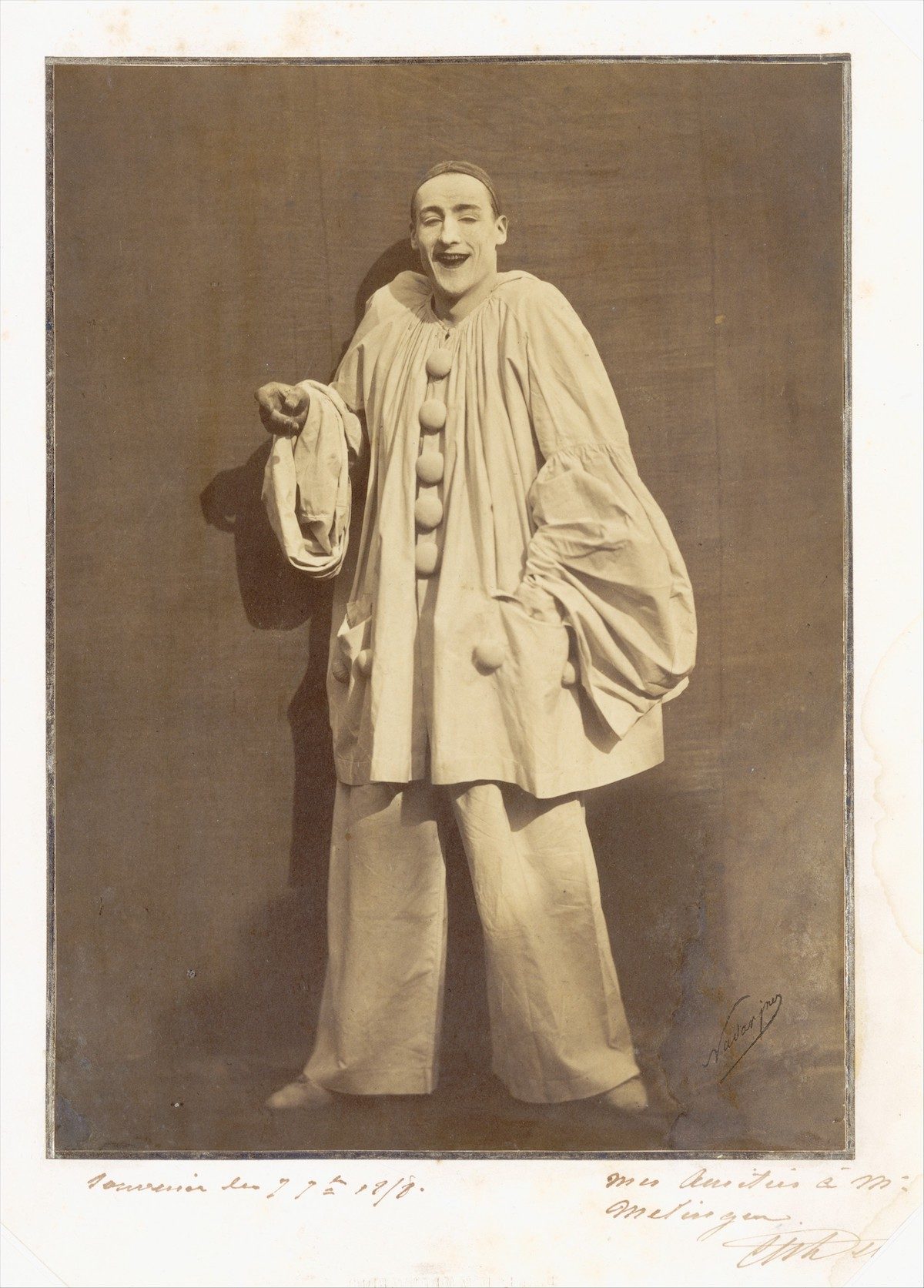 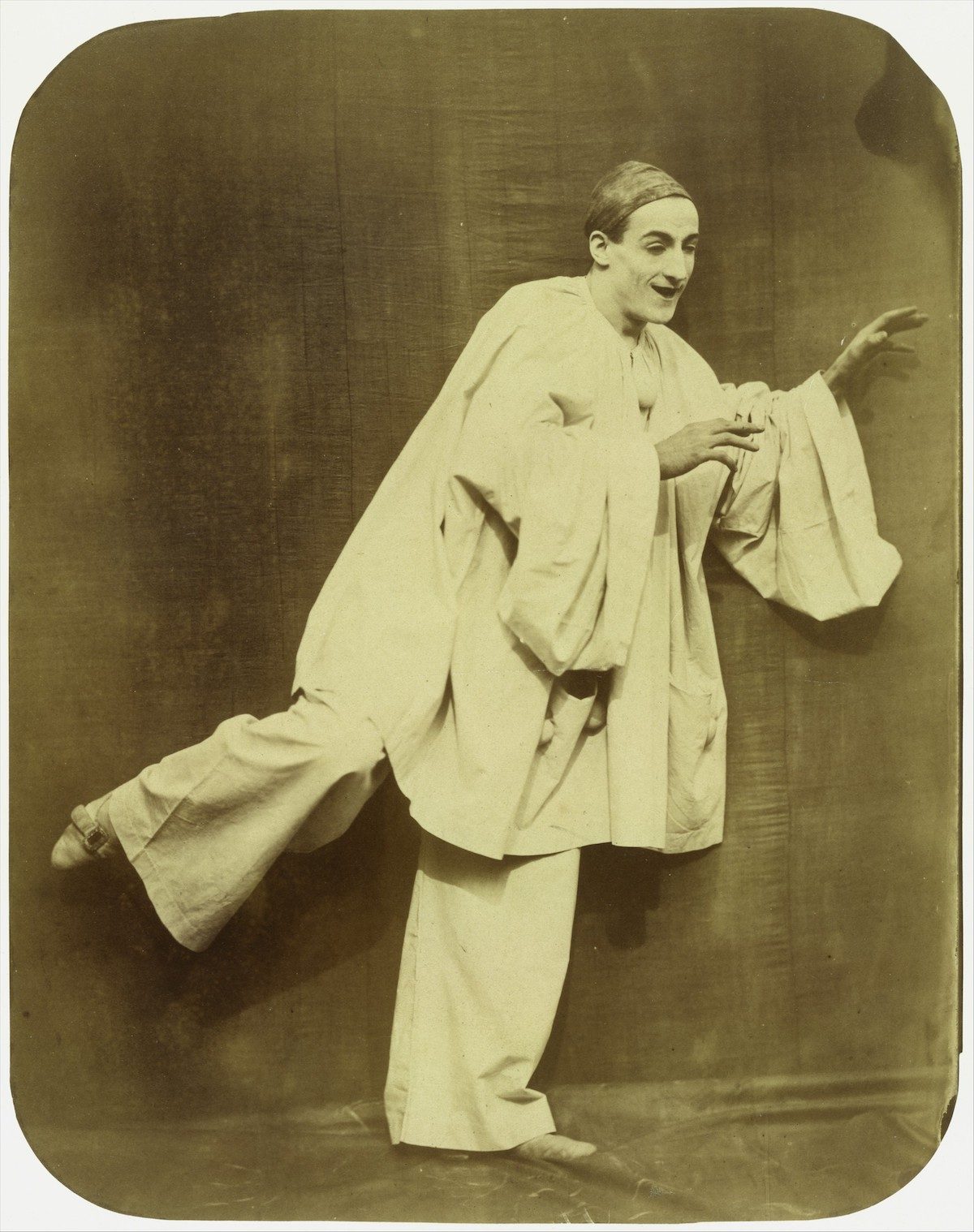 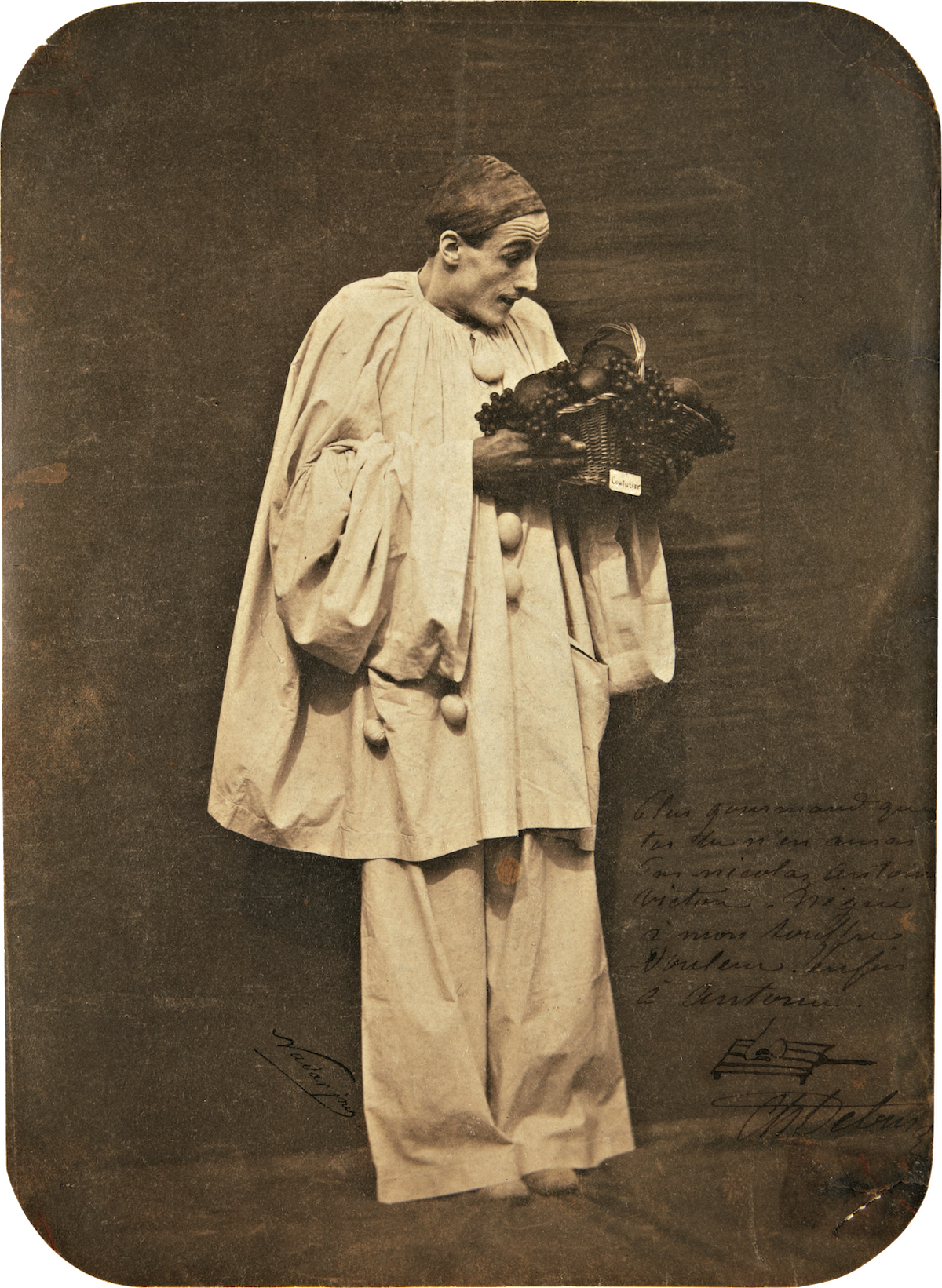 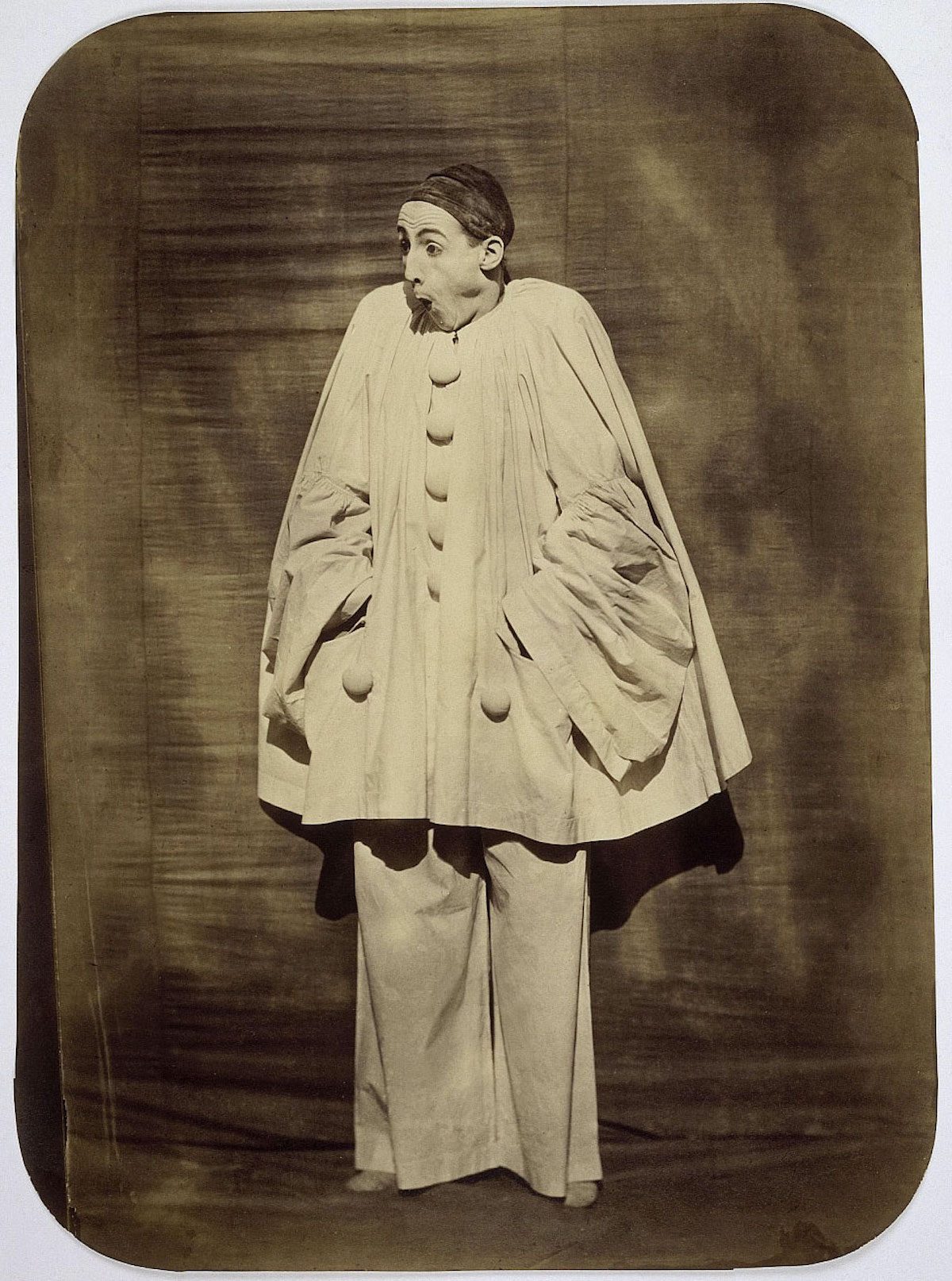