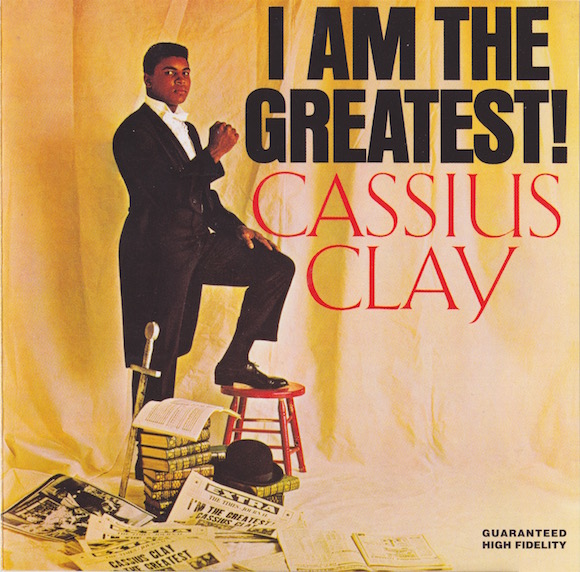 Front cover of the Rev-Ola reissue of I Am The Greatest. Scan courtesy Joe Fost

I was commissioned to write these sleeve-notes by Joe Foster for his label Rev-Ola’s 1998 reissue of I Am The Greatest, the Cassius Clay album pulled from the shelves by Columbia Records amid his championing of civil rights and name change to Muhammad Ali.

To those of us who grew up with Ali, whatever our persuasion or interest in boxing, he was – as I wrote nearly 20 years ago – King Of The World.

From Champion As Long As He Wants, Gilbert Rogin, Sports Illustrated, November 29, 1965

IN the mid-60s, the writer Gilbert Rogin, one of those hard-asses equally at home publishing fiction in The New Yorker as filing sports coverage in the dailies, expressed the perplexing prospect presented to the world by Cassius Marcellus Clay’s complex personality.

Insisting on using Ali’s despised “slave-name”, Rogin was attempting to assess this giant’s world-beating activities inside the ring, but his remarks refer equally to this collection of bragadoccio raps, bar-room poems and verbal whuppings delivered to the likes of vanquished rivals such as Sonny Liston.

Also present and correct is the rare version of Ben E. King’s Stand By Me, a finely delivered performance which rivals those of the greatest vocalists who have also covered the song.

At the time of recording Clay’s cachet was pretty damn high. His charisma, stunning physical abilities and spitfire mouth had combined to turn around the fortunes of the US boxing industry; annual receipts rose from $7.8m in 1963 to £26.5m two years later.

Of course Clay had already laid down markers that he was an outspoken and frighteningly smart Civil Rights advocate, as adept at verbal as physical sparring.

The story goes that when plain clothes cops pulled over his Cadillac in Chicago’s South Side on some cockamamie charge, Clay informed the arresting officer: “I represent the Negro government. I’m a fifteen-million-dollar-a-year man and you’re nothing but a policeman. The only reason you arrested us is because we are Negro. You want a white champion. You’ll never get one. Nobody is going to beat me.”

Cover and page from my essay in the Rev-Ola CD booklet. Scan courtesy Joe Foster

He was just getting started. Soon Clay would enrage middle America by affiliation with the black supremacist Nation of Islam (he changed his name to Muhammad Ali in March 1964) and adoption of its anti-draft stance. Although he had registered with the military in April 1960 his steadfast and public refusal to join up in August 1966 provoked a worldwide media shit-storm.

This he stirred with such acts as regular citations of Elijah Muhammad’s incendiary Message To The Blackman and evangelism on the part of the movement’s house journal Muhammad Speaks, which famously depicted Uncle Sam whispering to president Lyndon Johnson, “Hurry! Sign all those niggers into war so they won’t be left behind us! Let our own sons stay behind in colleges and universities!” 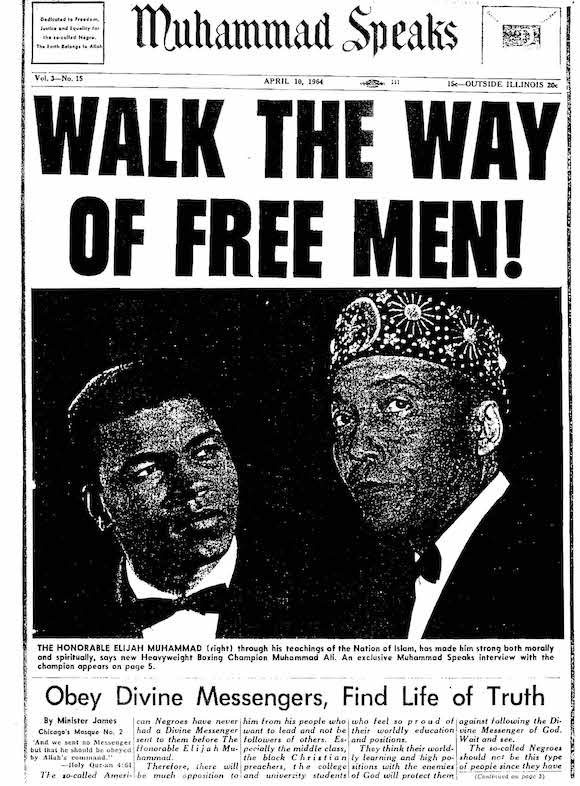 Ali on the front page of Muhammad Speaks, courtesy The Malcolm X Project at Columbia University

Global political controversy, ‘Enery Cooper, Rumble In the Jungle and – not least – the startling physical ravages wreaked by the onset of Parkinson’s Disease all lay in the future when he was snapped up for these recording sessions by the William Morris Agency. The plan was to groom the devastatingly handsome young athlete into an all-round entertainer.

Hollywood mavens know a business opportunity when they see one, but they had some chance of controlling Clay. He had already been taken under the wing of another Civil Rights champion, Sam Cooke, who had himself shaken the US entertainment industry to the core by demanding and obtaining a landmark deal (for a black artist) with RCA which granted royalty parity with established white performers.

Backed by the heavyweight presence of his young accountant Allen Klein, later to steer the financial affairs of the Beatles and the Stones but already a feared negotiator, Cooke had dared to audit his record company to uncover missing royalties. Not content with the pay-out which resulted from this exercise, Cooke also expressed his discontent at appearing on a rinky-dink subsidiary and won the right to line up with other artists such as Elvis on RCA’s main label.

Having scored another first by receiving full artistic freedom to record and release whatever material he chose, Cooke identified in the suave and sophisticated Clay a kindred spirit, particularly when the 7-1 “pretty boy” outsider supplanted the thuggish ex-con Liston on the night of February 25 1964.

When the century’s greatest sportsman was rushed in to record these tracks for Columbia, Cooke was on hand to assist and advise.

Throughout the sessions Clay raps, jokes, boasts and preens to an audience of eager yucks. The staginess of the “live” setting and macho posturing are undercut by his abundant charm and razor-sharp wit, making for a genuinely charming collection.

The decision not to use music was reversed for the album’s single I Am The Greatest, the rhythm track to which was overdubbed later. This featured Stand By Me on the B-side (although this track was not included on the original album release).

The album’s commercial prospects were crushed by the whirlwind Clay set in motion with the name change of March 64. His support for the Nation Of Islam sparked serious consideration of stripping him of the newly gained WBC Heavyweight title, and prompted Columbia to panic and pulled the record from stores.

Who knows what would have happened to our hero’s musical ambitions had he been able to follow the path Stand By Me hints at? As the media jackals and establishment forces closed ranks, the man newly named Muhammad Ali had enough on his plate, and, within a matter of months his champion Cooke was dead at 33, fatally wounded at the Hacienda Motel in south Los Angeles in the mysterious circumstances which continue to give rise to conspiracy theories.

Ali did indulge his singing talents a couple more times, but never seriously. In the 70s he was joined by the likes of Frank Sinatra on the jaw-dropping dental health campaign song Ali & His Gang Vs Mr Tooth Decay.

But that, thankfully, is a whole other story.

Remember him this way, when he was king of the world.

To some of us, he still is.