The great inventor Nikola Tesla was born on July 10, 1856. Tesla was the naturalised American whose “work on electromagnetism and electromechanical engineering contributed to the birth of commercial electricity”.

The BBC profiled him:

Tesla was on the winning side in the War of the Currents – the battle between George Westinghouse and Thomas Edison to establish whether AC or direct current (DC) would be used for electricity transmission. But as far as posterity goes, time has not been kind to Tesla.

Born in what is now Croatia to Serbian parents, he moved to New York in 1884 and developed radio controlled vehicles, wireless energy and the first hydro-electric plant at Niagara Falls. But he was an eccentric. He believed celibacy spurred on the brain, thought he had communicated with extraterrestrials, and fell in love with a pigeon.

Over recent decades he has drifted into relative obscurity, while Edison is lauded as one of the world’s greatest inventors.

Tesla was the greatest geek who ever lived. 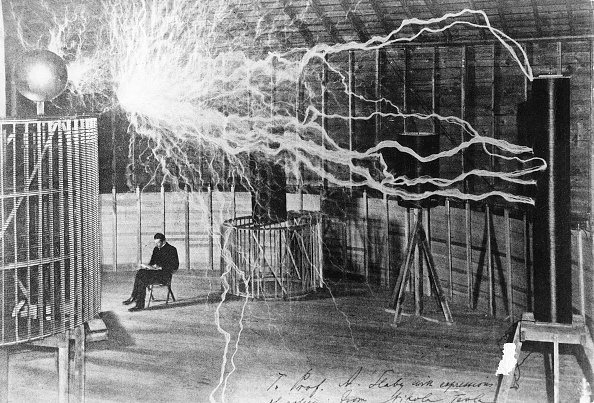 “Let the future tell the truth and evaluate each one according to his work and accomplishments. The present is theirs; the future, for which I really worked, is mine.” – Nikola Tesla 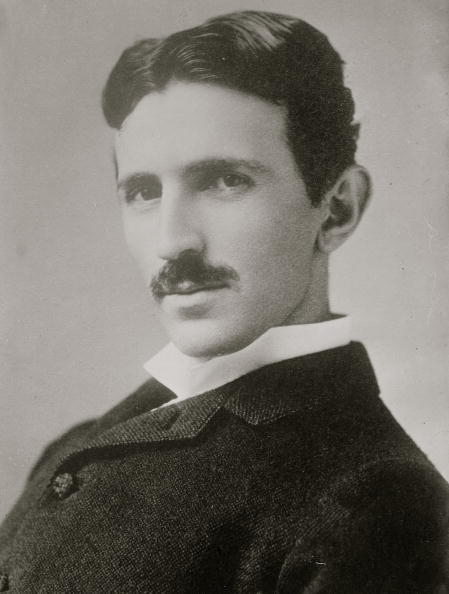 “Tesla is not really dead. Only his poor wasted body has been stilled. The real, the important part of Tesla lives in his achievement which is great, almost beyond calculation, an integral part of our civilization, of our daily lives.” 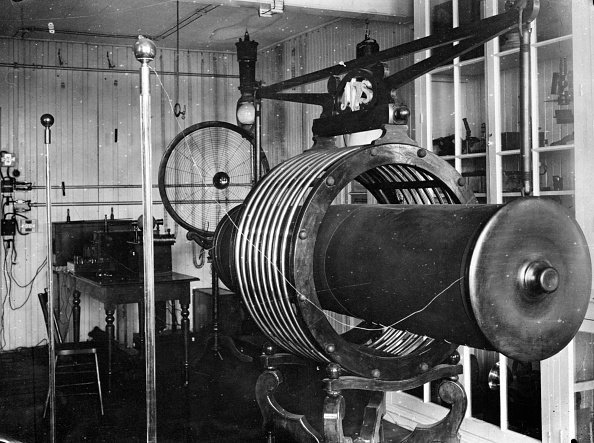 The Telsa Society, as you’d expect, has lots more on the man: 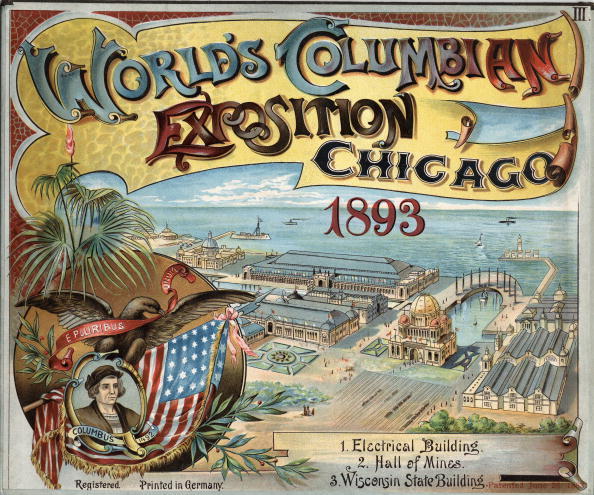 (Not everything at the show was a sensation.)

An advertisement for the Bickford Family Knitter published in the ‘Authentic World’s Fair Journal’ dated October, 1892, to promote the World’s Columbian Exposition in Chicago, Illinois

This accomplishment changed the world. He designed the first hydroelectric powerplant in Niagara Falls in 1895, which was the final victory of alternating current. The achievement was covered widely in the world press, and Tesla was praised as a hero world wide. 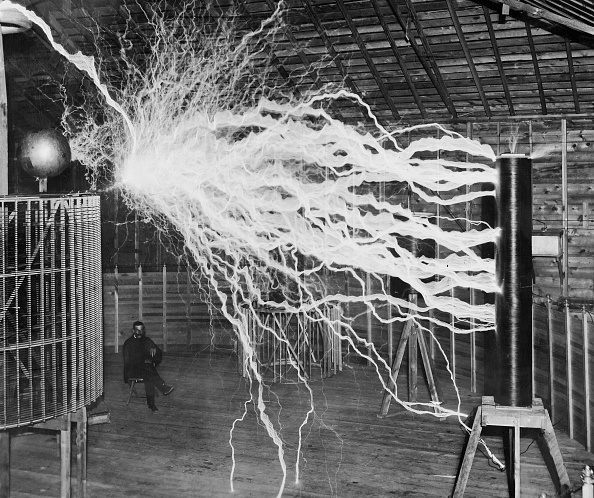 In 1888: The Tesla Alternate Current Motor:

“What the result of these investigations will be the future will tell; but whatever they may be, and to whatever this principle may lead, I shall be sufficiently recompensed if later it will be admitted that I have contributed a share, however small, to the advancement of science.”

“That is the trouble with many inventors; they lack patience. They lack the willingness to work a thing out slowly and clearly and sharply in their mind, so that they can actually ‘feel it work.’ They want to try their first idea right off; and the result is they use up lots of money and lots of good material, only to find eventually that they are working in the wrong direction. We all make mistakes, and it is better to make them before we begin.”

In 1900: The Problem of Increasing Human Energy:

“When we speak of man, we have a conception of humanity as a whole, and before applying scientific methods to the investigation of his movement, we must accept this as a physical fact. But can anyone doubt to-day that all the millions of individuals and all the innumerable types and characters constitute an entity, a unit? Though free to think and act, we are held together, like the stars in the firmament, with ties inseparable. These ties cannot be seen, but we can feel them. I cut myself in the finger, and it pains me: this finger is a part of me. I see a friend hurt, and it hurts me, too: my friend and I are one. And now I see stricken down an enemy, a lump of matter which, of all the lumps of matter in the universe, I care least for, and it still grieves me. Does this not prove that each of us is only part of a whole?”

In 1905 from The Transmission of Electrical Energy Without Wires as a Means for Furthering Peace:

“We begin to think cosmically. Our sympathetic feelers reach out into the dim distance. The bacteria of the “Weltschmerz” are upon us. So far, however, universal harmony has been attained only in a single sphere of international relationship. That is the postal service. Its mechanism is working satisfactorily, but—how remote are we still from that scrupulous respect of the sanctity of the mail bag!” 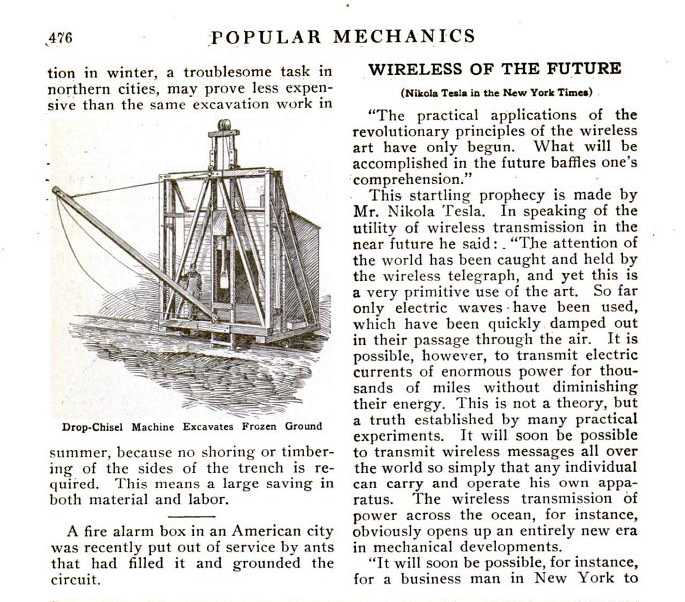 “It will soon be possible, for instance, for a business man in New York To dictate instructions and have them appear instantly in type in London or elsewhere. He will be able to call up from his desk and talk with any telephone subscriber in the world. It will only be necessary to carry an inexpensive instrument not bigger than a watch, which will enable its bearer to hear anywhere on sea or land for distances of thousands of miles. One may listen or transmit speech or song to the uttermost parts of the world.”

In 1926 he opined in an article entitled When Woman Is Boss:

“But the female mind has demonstrated a capacity for all the mental acquirements and achievements of men, and as generations ensue that capacity will be expanded; the average woman will be as well educated as the average man, and then better educated, for the dormant faculties of her brain will be stimulated to an activity that will be all the more intense and powerful because of centuries of repose. Woman will ignore precedent and startle civilization with their progress.” 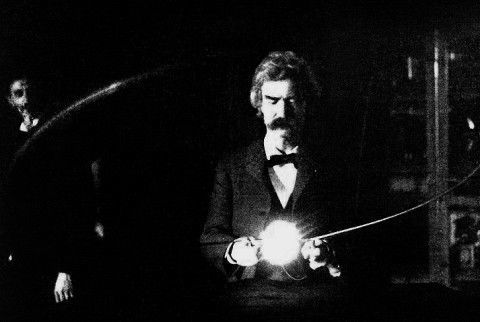 Tesla was the celebrity scientist.

According to the University of Virginia, Mark Twain visited Tesla’s lab in the spring of 1894, when Century Magazine published an article called “Tesla’s Oscillator and other Inventions” (via):

[Mr. Tesla] invites attention to-day, whether for profound investigations into the nature of electricity, or for beautiful inventions in which is offered a concrete embodiment of the latest means for attaining the ends most sought after in the distribution of light, heat, and power, and in the distant communication of intelligence.  Any one desirous of understanding the trend and scope of modern electrical advance will find many clues in the work of this inventor.  The present article discloses a few of the more important results which he has attained, some of the methods and apparatus which he employs, and one or two of the theories to which he resorts for an explanation of what is accomplished…

Here are great results, lofty aims, and noble ideas; and yet they are but a beggarly few of all those with which Mr. Tesla, by his simple, modest work, has associated his name during recent years. He is not an impracticable visionary, but a worker who, with solid achievements behind him, seeks larger and better ones that lie before, as well as fuller knowledge. I have ventured to supplement data as to his late inventions by some of his views as to the ether, which throughout this presentation of his work has been treated familiarly as the maid-of-all-work of the universe. All our explanations of things are but half-way houses to the ultimate facts. It may be said, then, in conclusion, that while Mr. Tesla does not hold Professor Oliver Lodge’s ingenious but intricate notion of two electricities and two ethers, and of the ether as itself electricity, he does belong to what Lord Kelvin has spoken of as the nineteenth-century school of plenum, accepting one ether for light, heat, electricity, and magnetism, outward manifestations of an inward unity whose secret we shall some day learn. 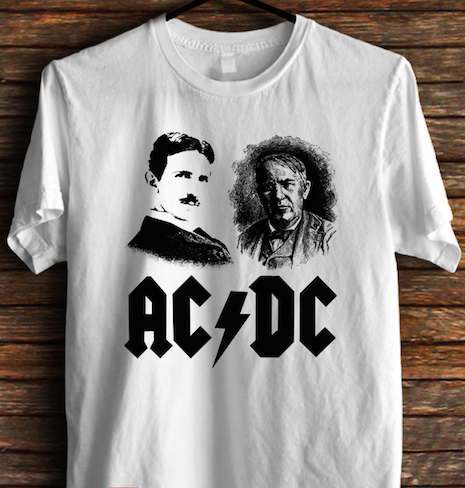 Now buy the shirt on eBay.

Dangeorous Minds has more on it:

It’s an open question how many AC/DC fans know that “AC” stands for “alternating current” and “DC” stands for “direct current”—but for those looking to catch up, Tesla invented AC, and Edison backed DC. Tesla had previously worked for Edison. Tesla was a genius and died alone in a hotel room in New York; Edison was also a genius and died as rich as Croesus. Edison killed an elephant named Topsy to demonstrate the supposed dangers of alternating current, as depicted in a 2013 episode of Bob’s Burgers called “Topsy.” Tesla was a man made for our underdog-rooting and nerdy age. 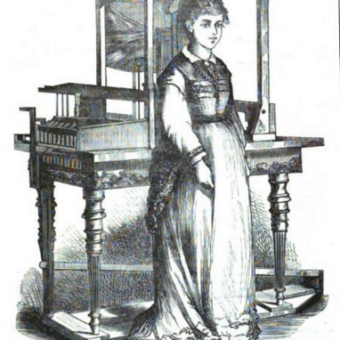 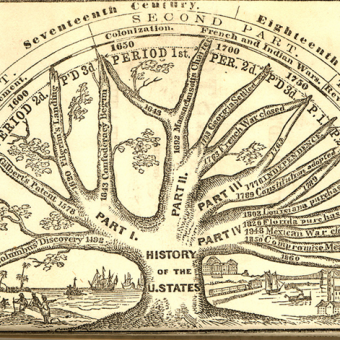 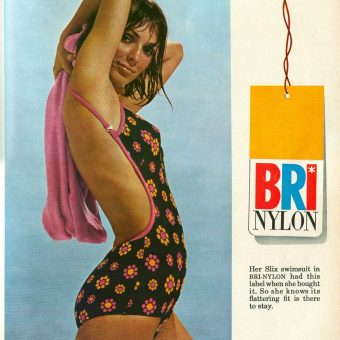 Flashback: Tom Hancocks of High Wycombe invented The Segway in 1962