Embassy House was one of the many provincial centers for Vietnam War Intel operations largely run by the State Dept and the CIA, writes Lance Nix. It also served to co-ordinate military and intelligence gathering operations using local Vietnamese militia and civilians in Dinh Tuong Province down in the Mekong Delta south of Saigon. The pictures in this album represent those taken by me during my tour of duty from the end of October 1968 to October 1969.

We need your help. If you are in any of these pictures, or know anyone who is, please get in touch. We’re working with Lance to build up a story on what happened during and after the War. 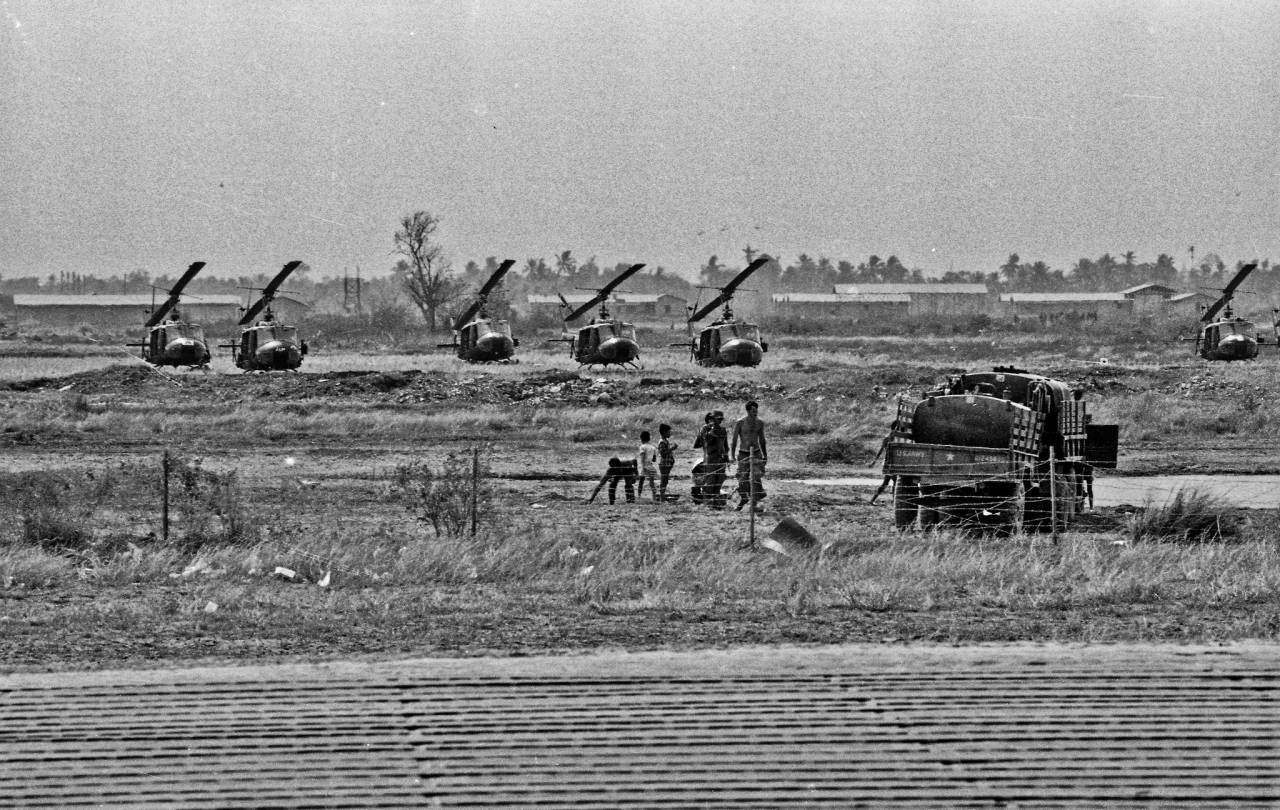 Airfield, Dong Tam, Dec 1968
A line of Bell UH-1 Huey’s used by the 9th Infantry Division for air insertions in and around Dinh Tuong Province down in the Mekong Delta. I only took one serious ride on one these when I and an officer were taken in and dropped off near a remote hamlet. The ride at nearly 140 knots at very low altitude to avoid enemy fire was incredible. When I say low we literally had to gain altitude to clear the dikes in the rice paddies. I sat between and just behind the pilot and co-pilot for the whole trip taking it all in. When we got to the LZ it was too wet to land so we had to jump out of the chopper as it hovered. After that anything any amusement park has to offer cannot compete. I shot this series on one of my infrequent visits to Dong Tam with an old Practiflex 35mm camera I initially brought over. Said camera had been picked up a pawn shop in Fresno by my dad back in the late ’50s. 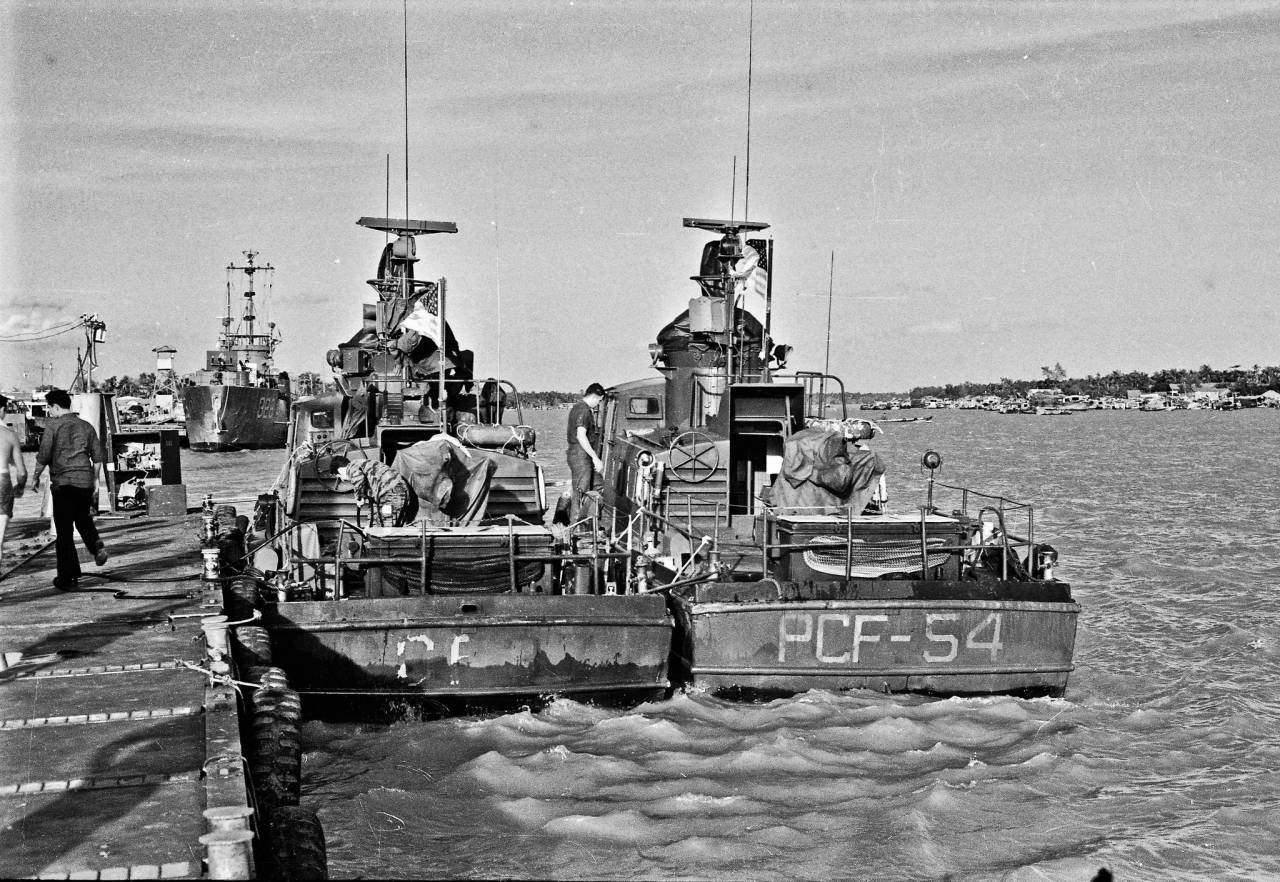 Brown Water Navy PCF Swift boats Dec 1968
A pair of Swift boats at the My Tho Navy docks on the Mekong River. Known as PCF’s for Patrol Craft Fast, they were about 50 feet long and made of aluminum.
Just a block or so south of the Dinh Tuong Provincial Phoenix HQ I worked out of during my “vacation” to the Vietnam war. 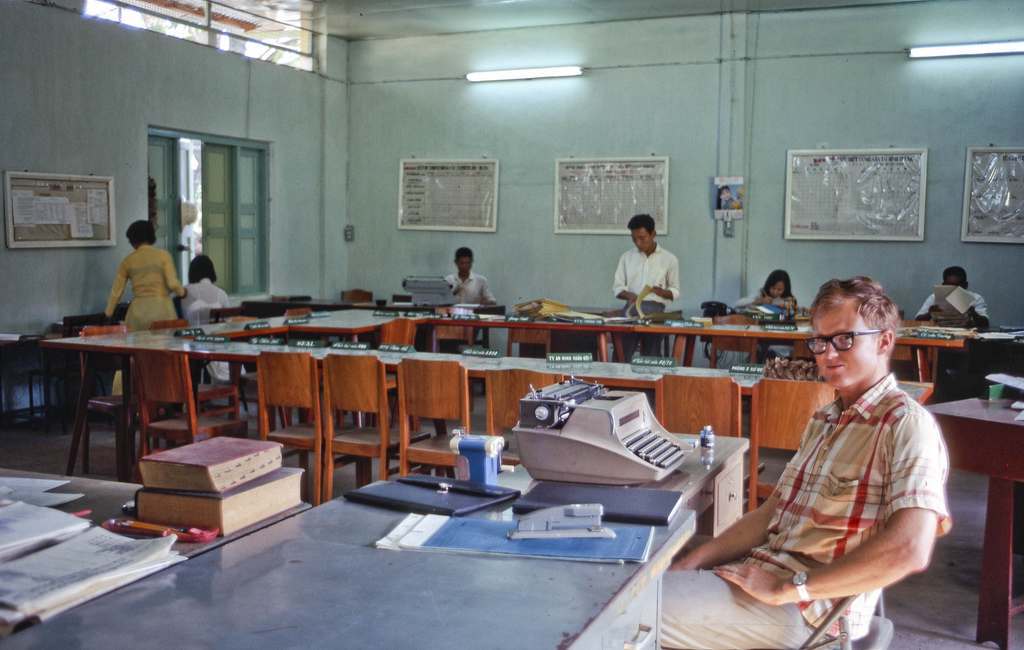 Just too much paperwork in this war. Now if I could just find some paper. 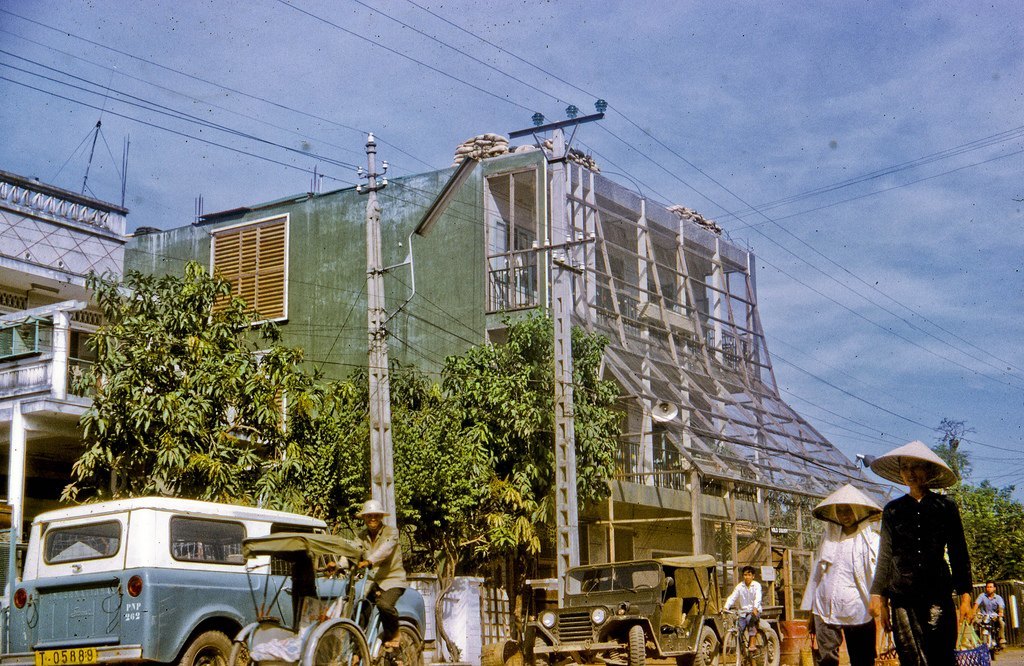 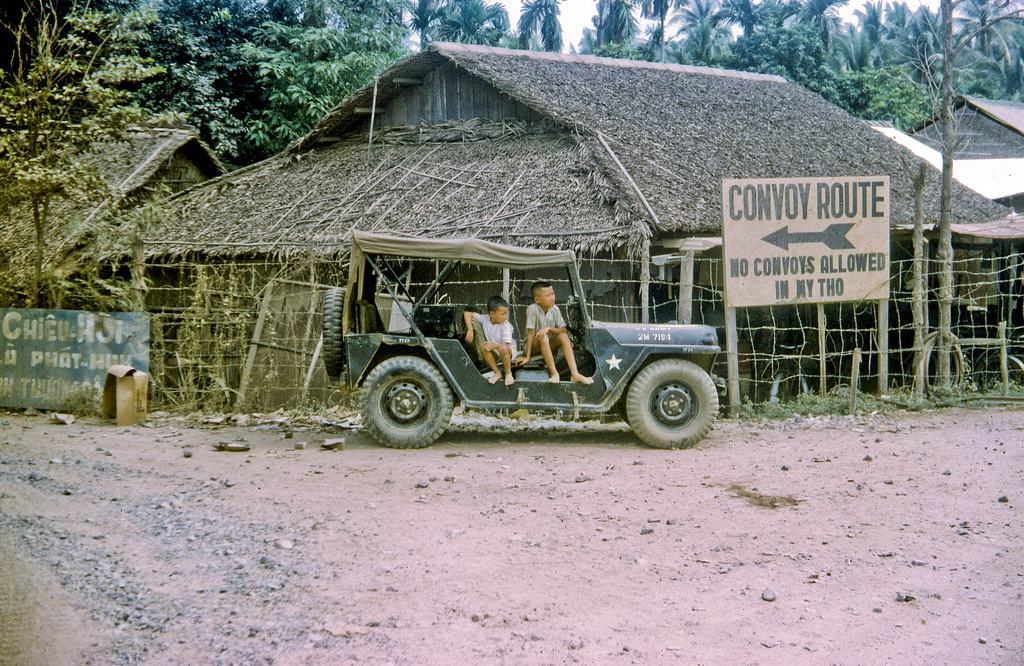 Road to My Tho in Nov 1968
Local kids sit in the jeep of the MP’s who are directing traffic for a passing convoy. Along the road between Dong Tam and the city of My Tho in Dinh Tuong Province, Vietnam IV Corps, in 1968. (scanned colour slide) 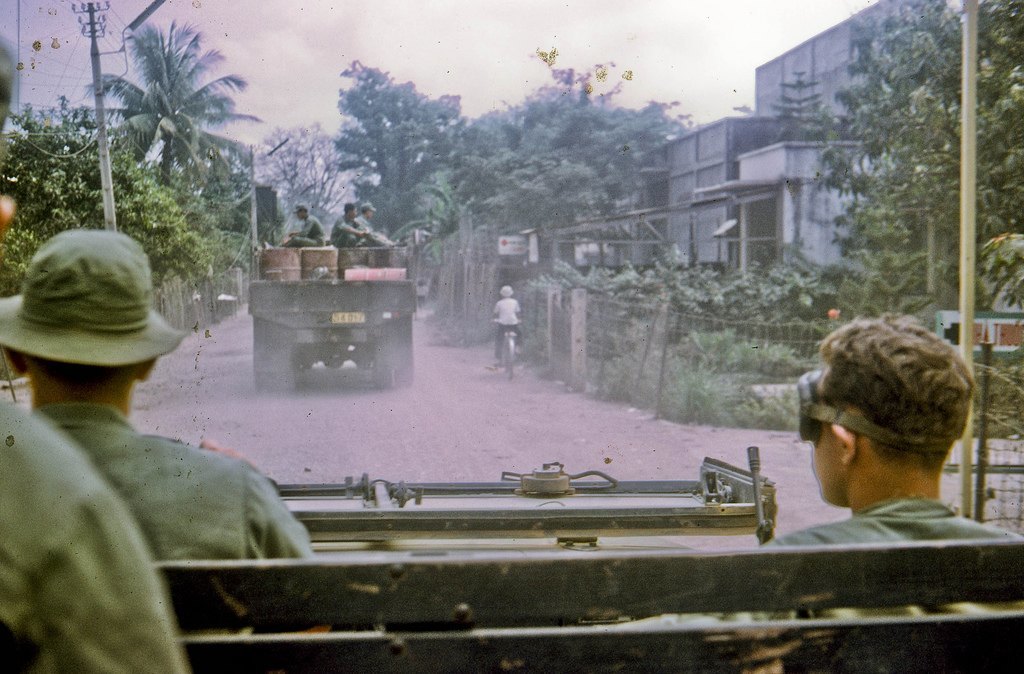 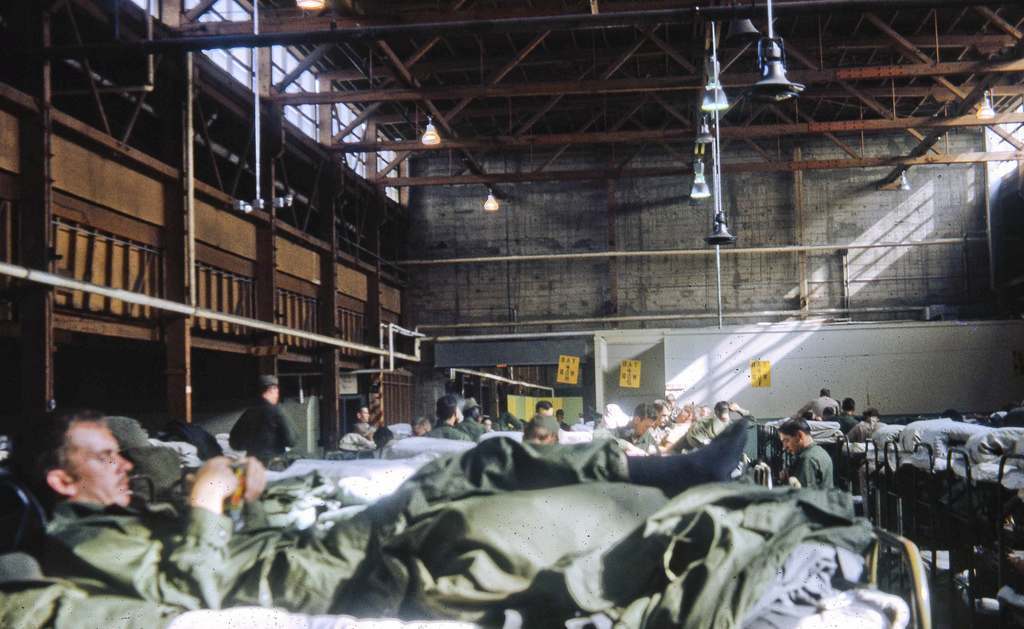 Transient Barracks Travis AFB 1968
In October 1968 the beginning of our one year guided tour of beautiful southeast Asia. 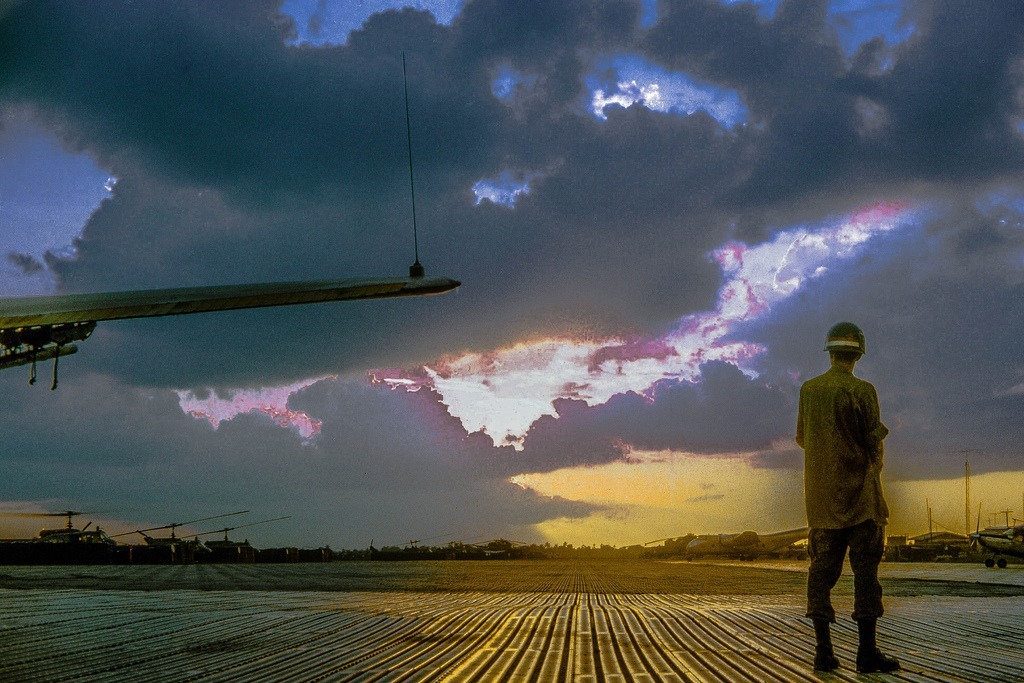 Dawn @ Tan Son Nhut Airfield Saigon Nov 1968
An early start for our flight out from Saigon to our final “vacation” destination in 1968. 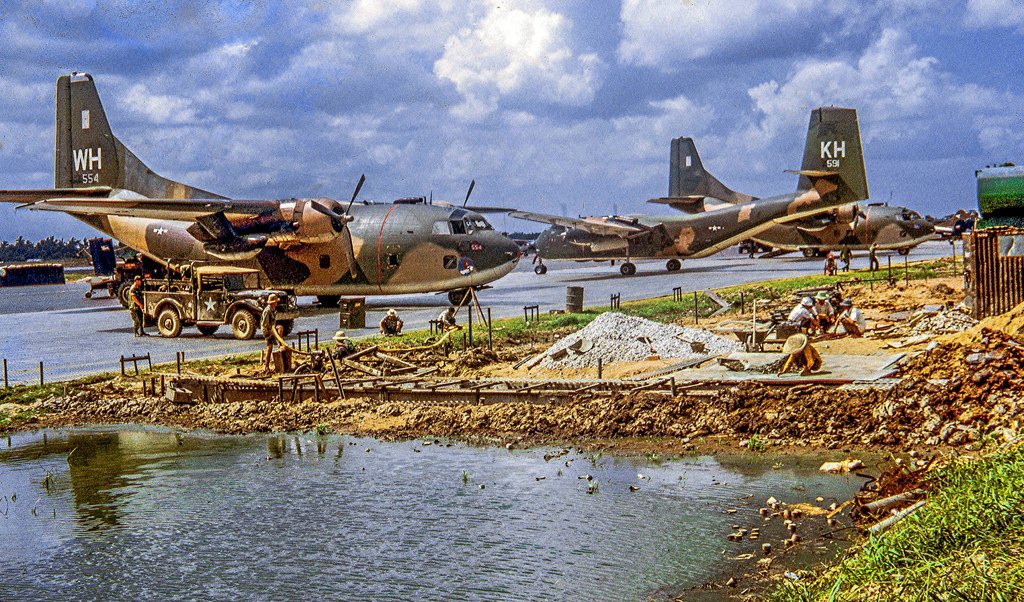 Can Tho Airfield, Nov 1968
Regional “air liners” in the Mekong Delta of Vietnam in the year 1968. 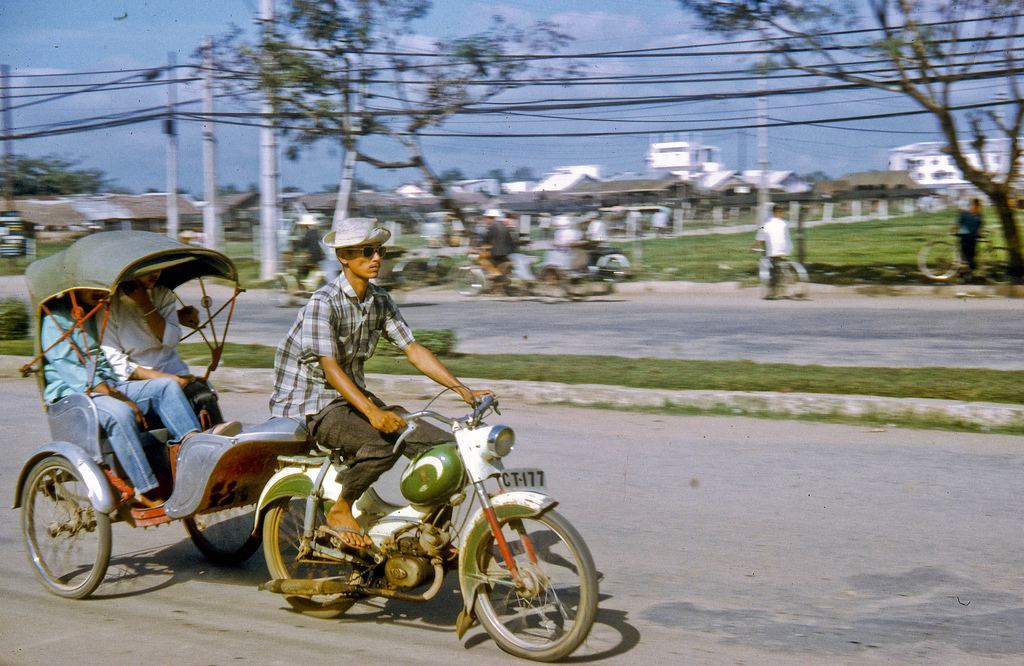 Can Tho Taxi November 1968
Vietnamese taxi as seen in 1968 in the Mekong Delta city of Can Tho. 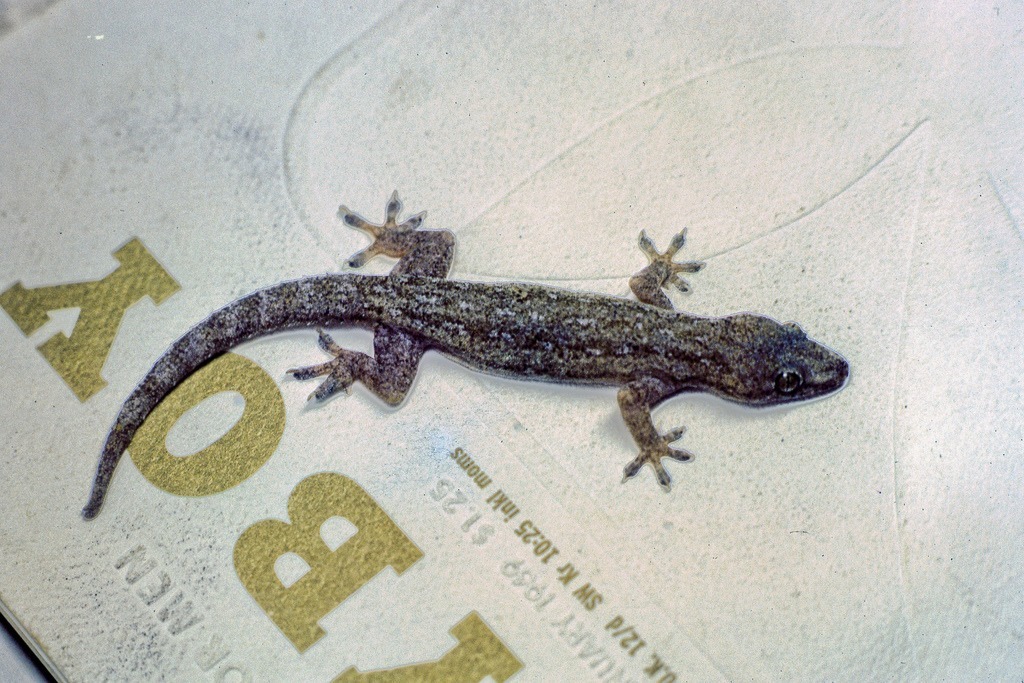 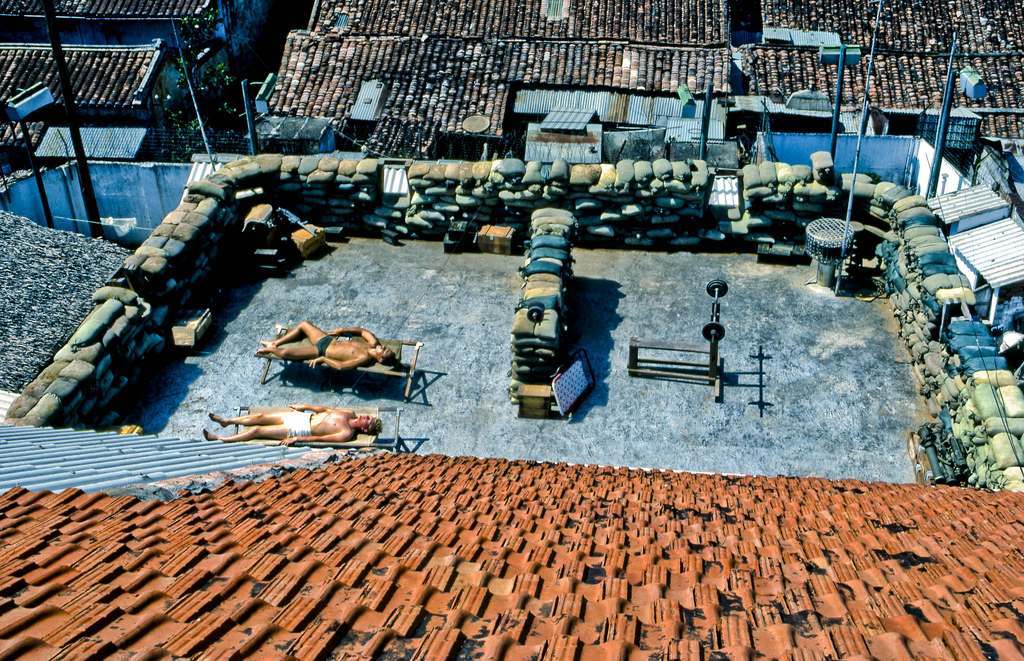 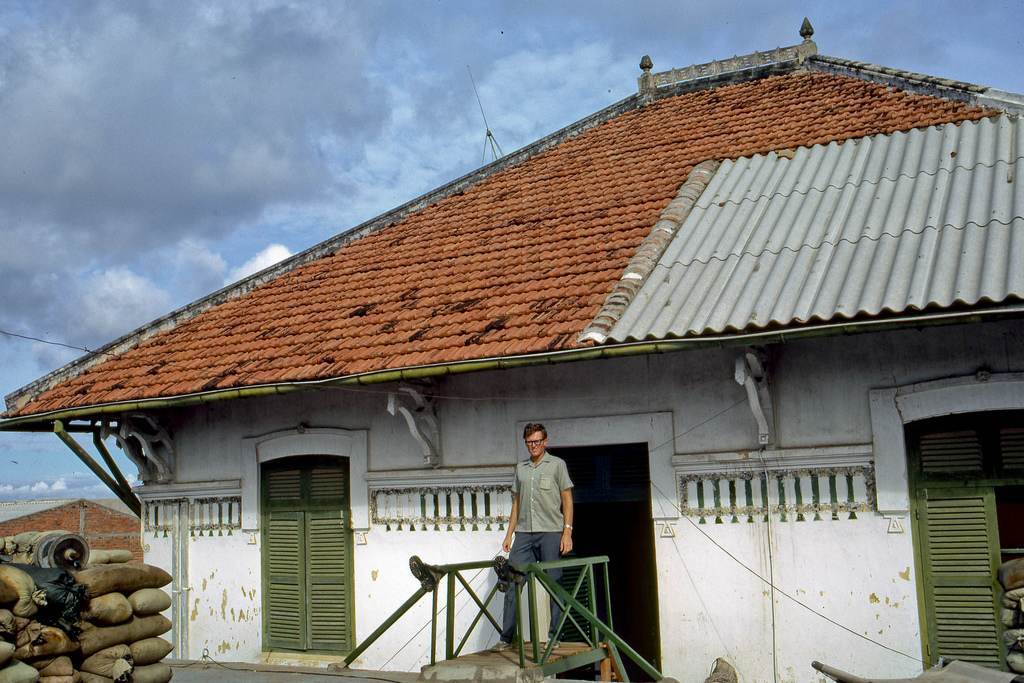 PFC L. V. Nix in late 1968 at the Embassy House Compound in My Tho, Dinh Tuong Province, Vietnam IV Corps.
PFC L.V. Nix…how long was u there ?
Lance Nix PRO 4y
I was there at Embassy House from early November 1968 til about July 1969 then they moved me to the big green building around the corner from Embassy House, the one they called “Hotel 1” I was there until I finally left Vietnam in late October 1969. 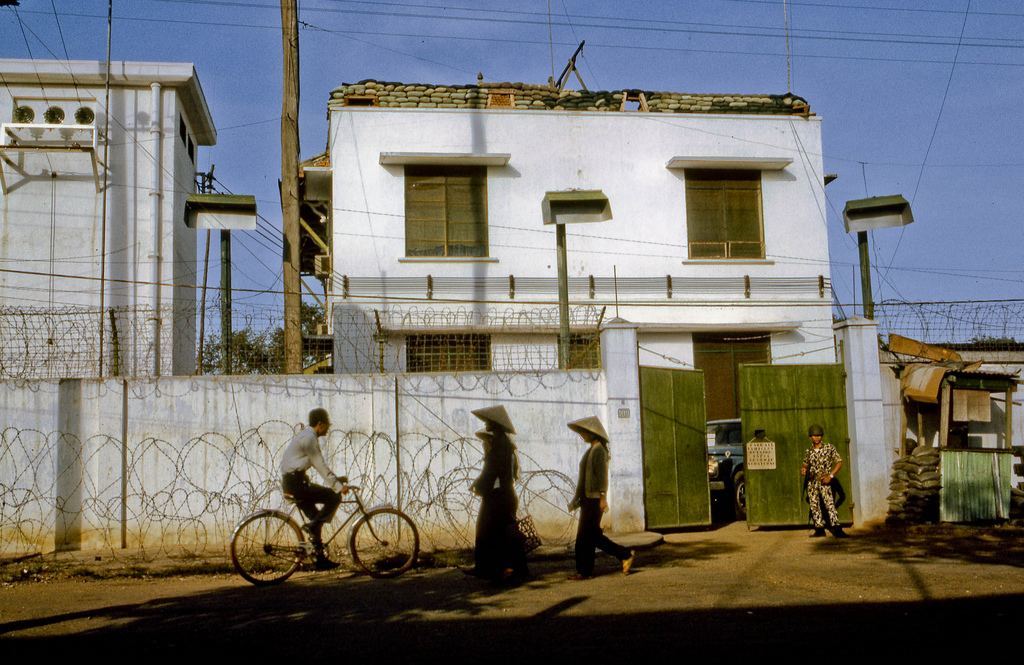 View of front (east) side of Embassy House In My Tho, Dinh Tuong Province, in the Mekong Delta of South Vietnam (IV Corps), as seen in late 1968. 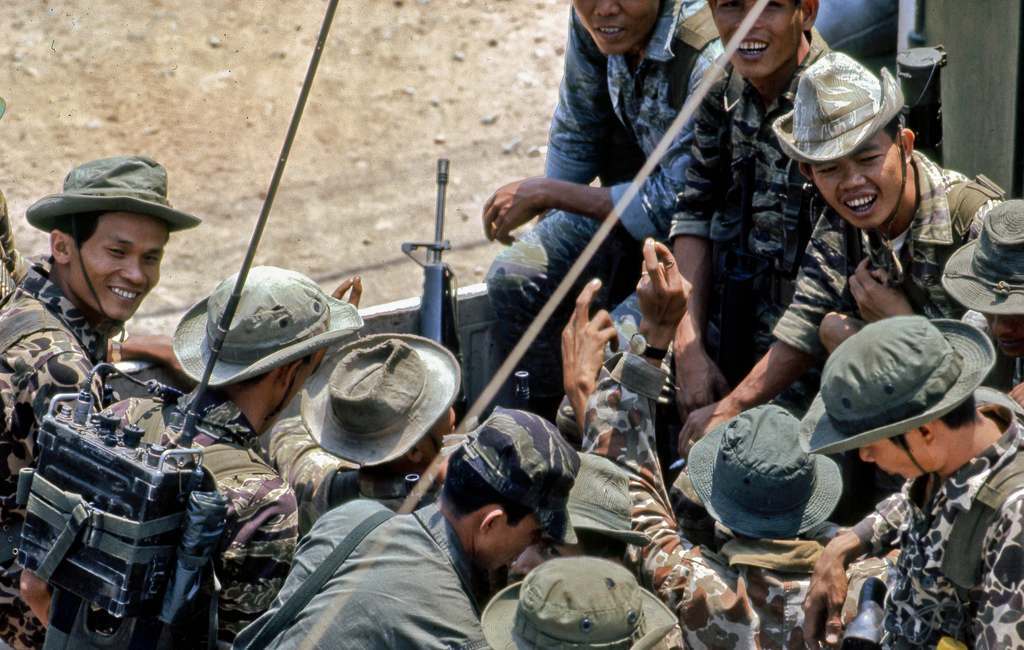 The PRU team loading up at the Embassy House compound to leave on a mission in Dinh Tuong Province in 1969. (in My Tho in Vietnam’s Mekong Delta) 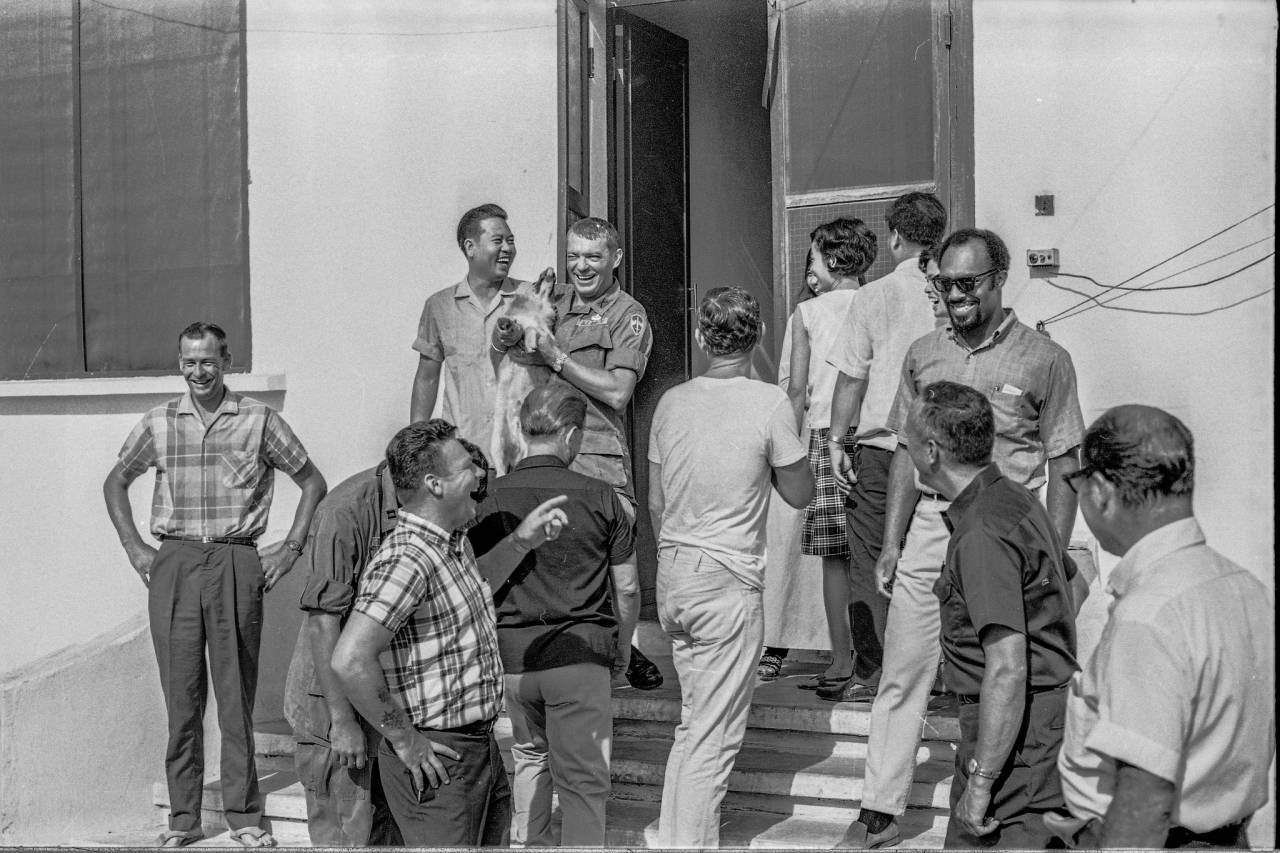 A Time-Out from the War
The Good-Bye gathering for one of gang and the temporary lack of anything urgent going on provides a relaxing break in the war and a period of joviality and light-hearted bantering.
At Embassy House in the City of My Tho, the capital of the Mekong Delta’s Dinh Tuong Province south of Saigon in the region known by the military as IV Corps. 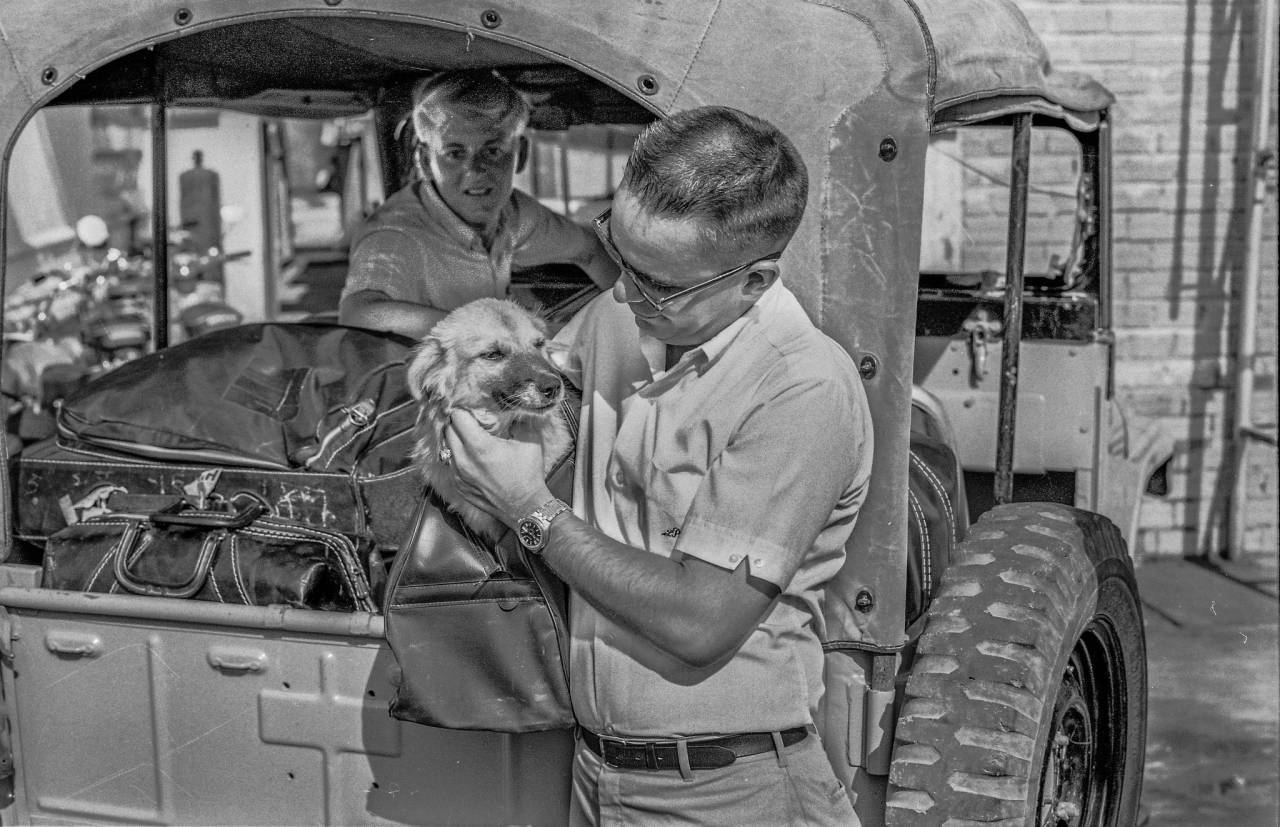 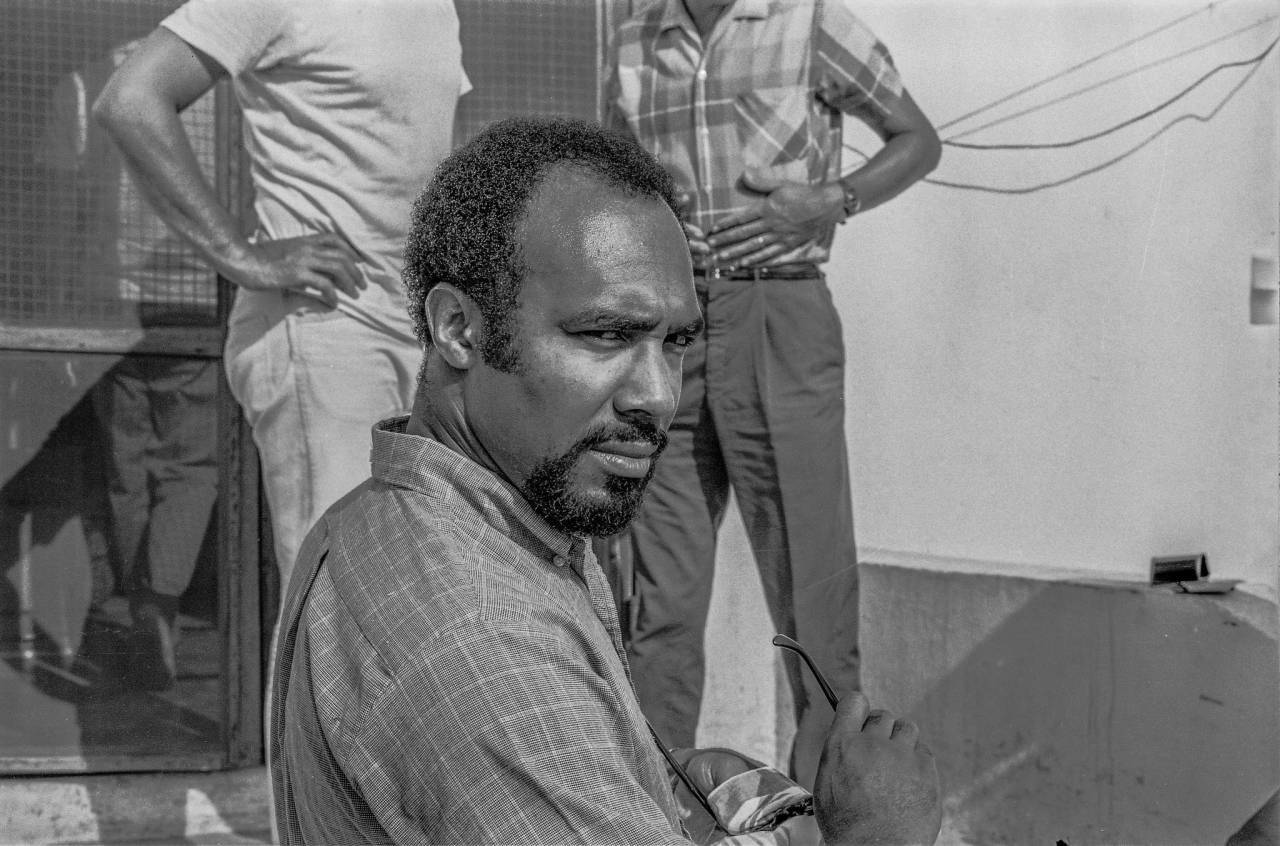 The Evil Eye
This guy was cool. I never did get to know exactly what he and his partner were involved with but then I did not have a need to know, the cardinal rule in the intel and covert ops world. It was as odd situation living at Embassy house . . . together for meals and occasional social situations but apart with regard to our separate areas of “work”. In general no one ever talked shop at the House.
At Embassy House in the City of My Tho, the capital of the Mekong Delta’s Dinh Tuong Province south of Saigon in the region known by the military as IV Corps. 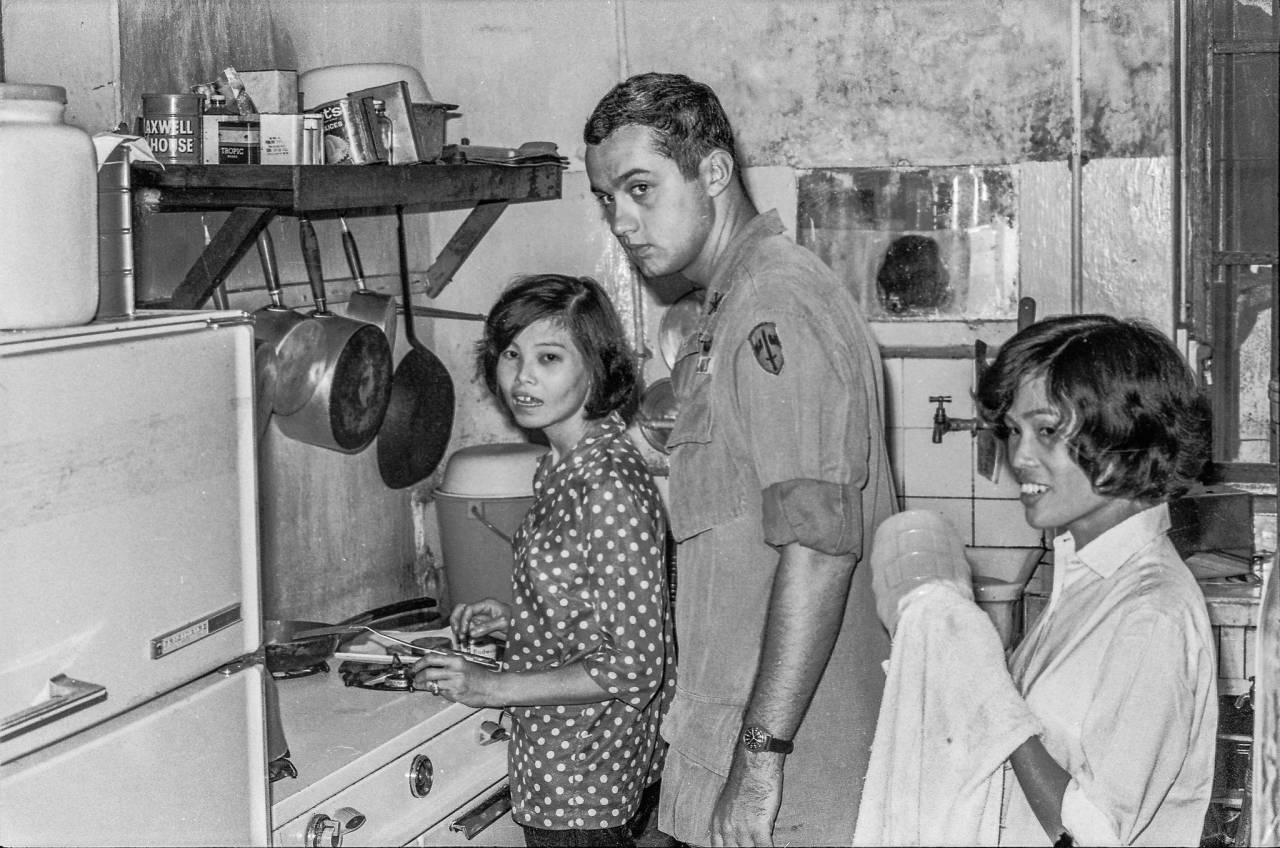 Our Cook, Capt John Kozak, and our housekeeper, 1969
At Embassy House in the City of My Tho, the capital of the Mekong Delta’s Dinh Tuong Province south of Saigon in the region known by the military as IV Corps. 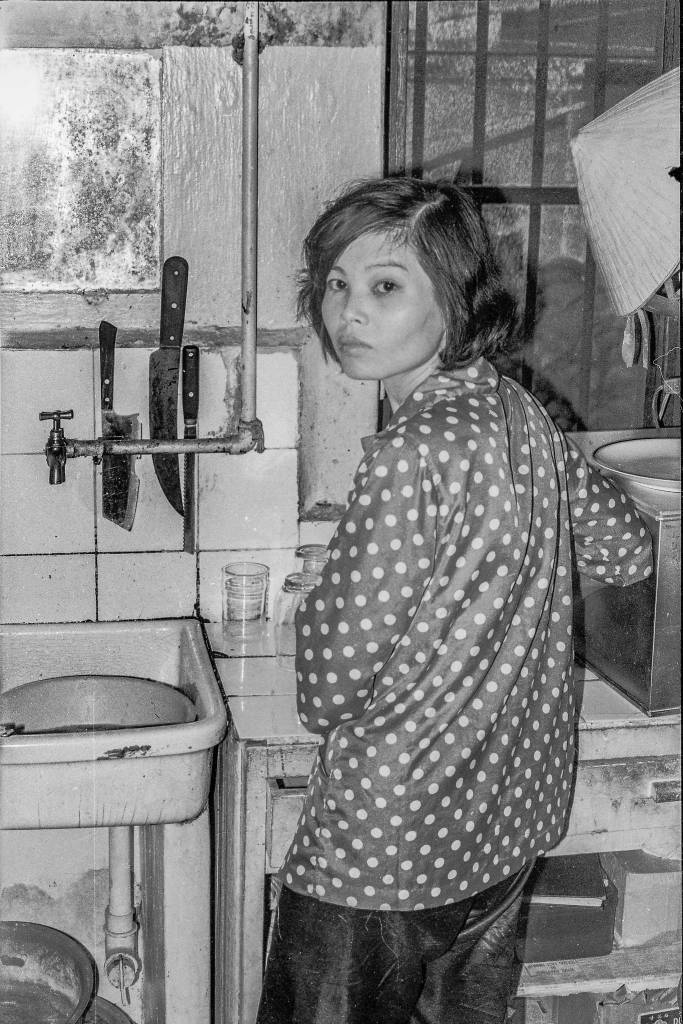 Embassy House Cook, My Tho, 1969
She was shy and spoke no English. Our house keeper and our house manager had to communicate to her for any of our request re: meals and preferences.
At Embassy House in the City of My Tho, the capital of the Mekong Delta’s Dinh Tuong Province south of Saigon in the region known by the military as IV Corps. 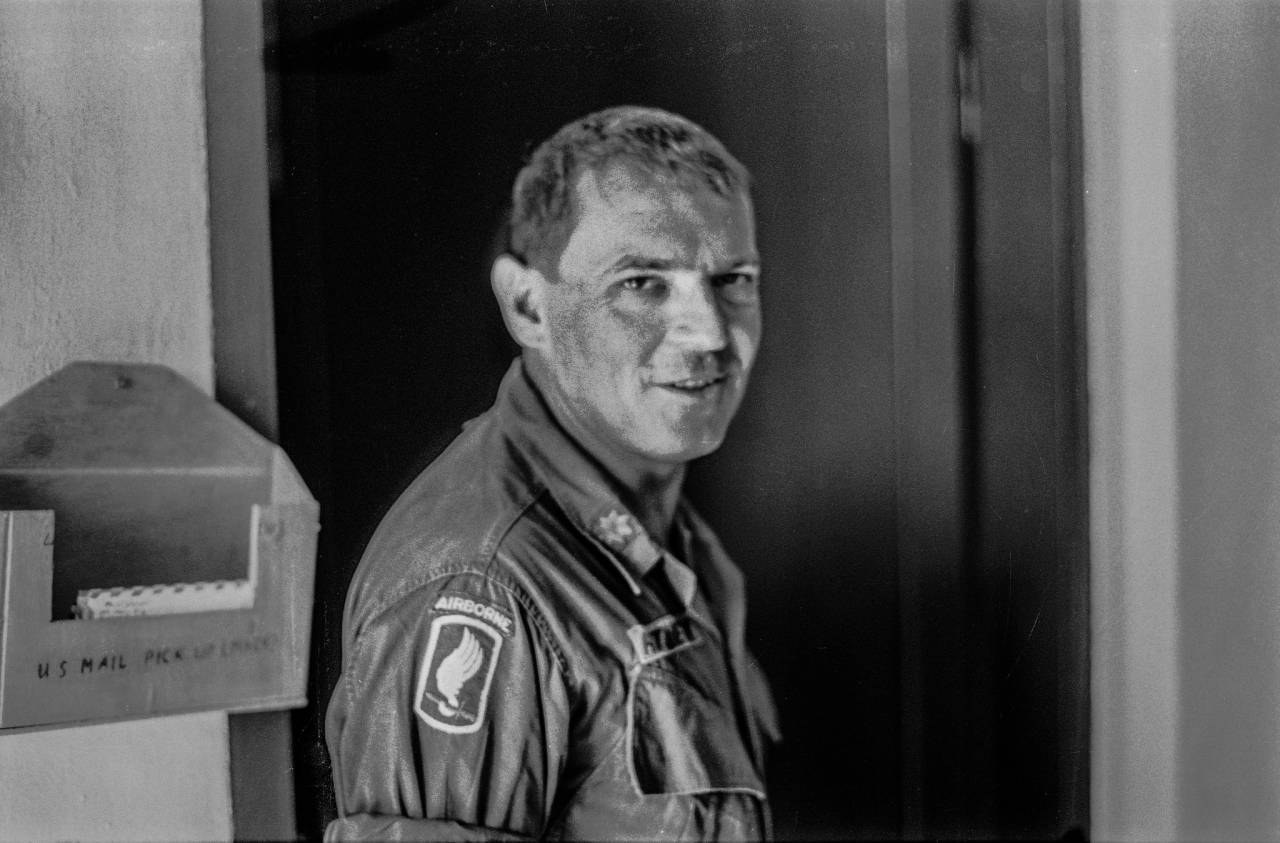 Major Wolfgang Hertwick, Phoenix Program
Major Hertwick was the head of Dinh Tuong Province Phoenix Program, a charter member of the U.S. Army personnel who took charge of the program after it was handed off to the military by the C.I.A. in 1968. Captain John Kozak and myself were also charter members of the take over there in My Tho.
Major Hertwick was singularly the most impressive person I encountered during my time in service. He was sharp as a razor and taught me much about politics and conduct of the Vietnam War and of the corruption and inefficiencies of government and government-run operations in general. He was a naturalized German national and had his German accent when he talked. He had dark red hair and dark brown eyes that could be piercing when he got serious or angry. But a majority of the time he maintained a relatively relaxed demeanor and kept things in perspective. He was not a by the book leader and he focused on getting the job done without a lot of rigid protocol which allowed all of us, in turn, to focus on our various missions. He was smart enough to always be aware of his status in any given life situation and while he had a strong ego he did not let it interfere negatively with the conduct of his leadership.
At Embassy House in the City of My Tho, the capital of the Mekong Delta’s Dinh Tuong Province south of Saigon in the region known by the military as IV Corps. 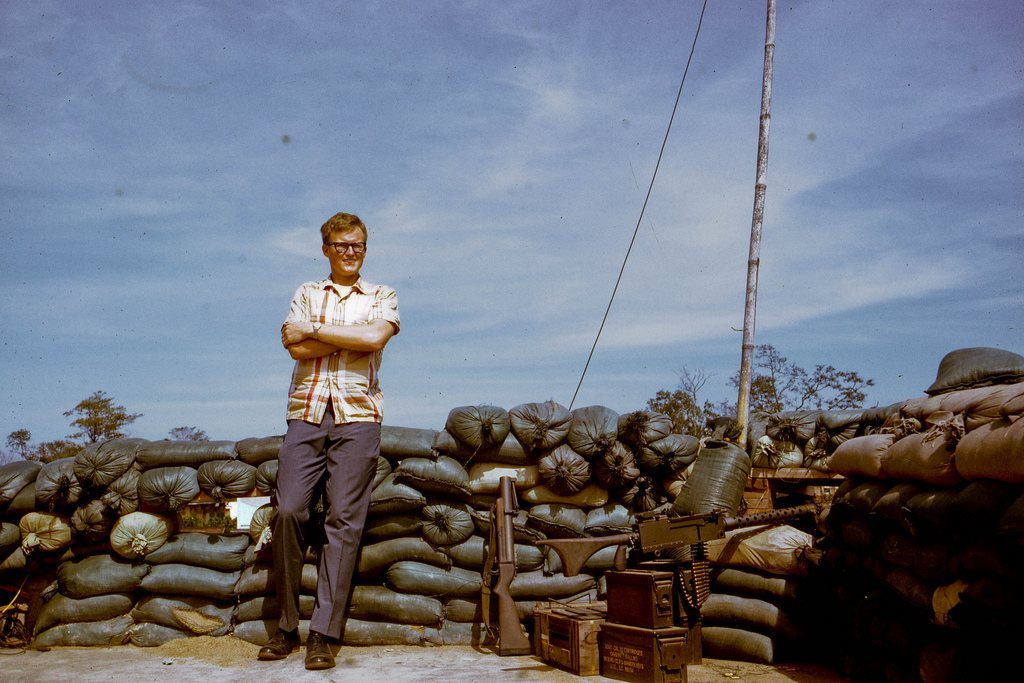 img047–Front-Roof-Embassy-House
PFC L. V. Nix (U.S.Army) at the Embassy House in My Tho, Dinh Tuong Province, Vietnam IV Corps, in December of 1968. A charter member of the PHOENIX Program after its transfer by the C.I.A. to the U.S. Army in 1968. 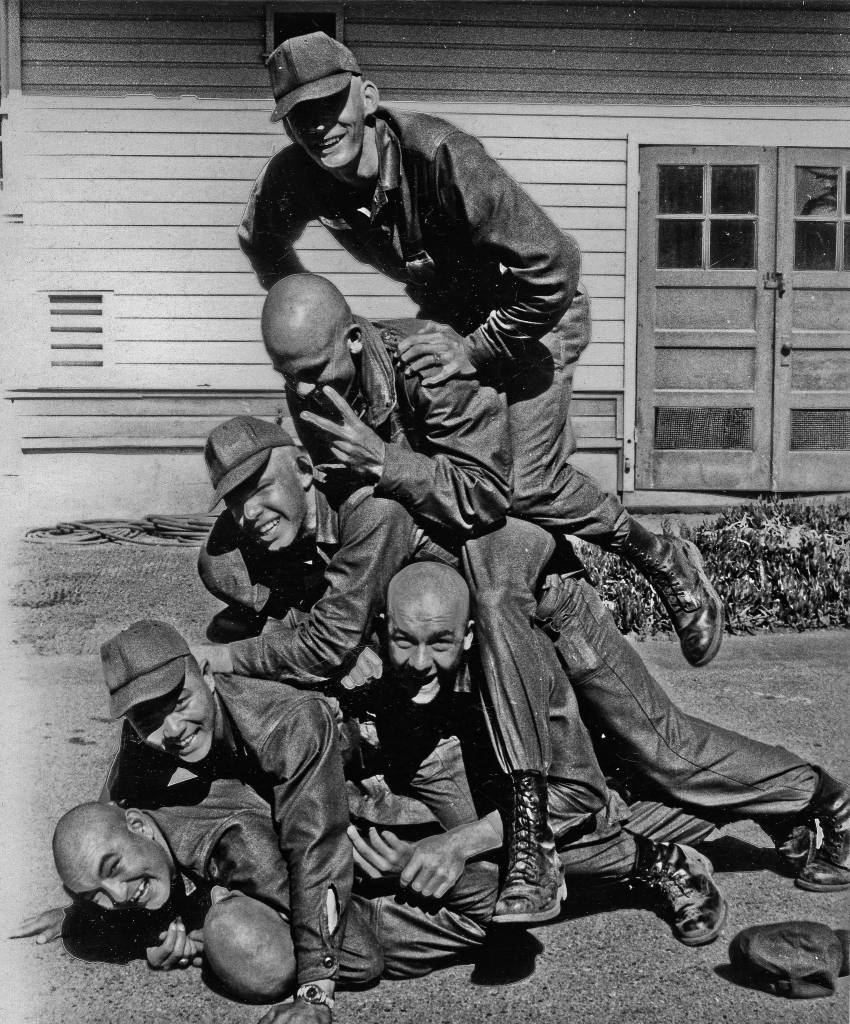 Goofing Off at Fort Ord Aug 1968
Members of my basic training unit, 2nd Platoon A-4-1. I entered the U.S. Army on June 12th, 1968, and was sent immediately to Fort Ord, California, to begin basic training in what became my “new home” for over 4 months. Then it was off to Vietnam. 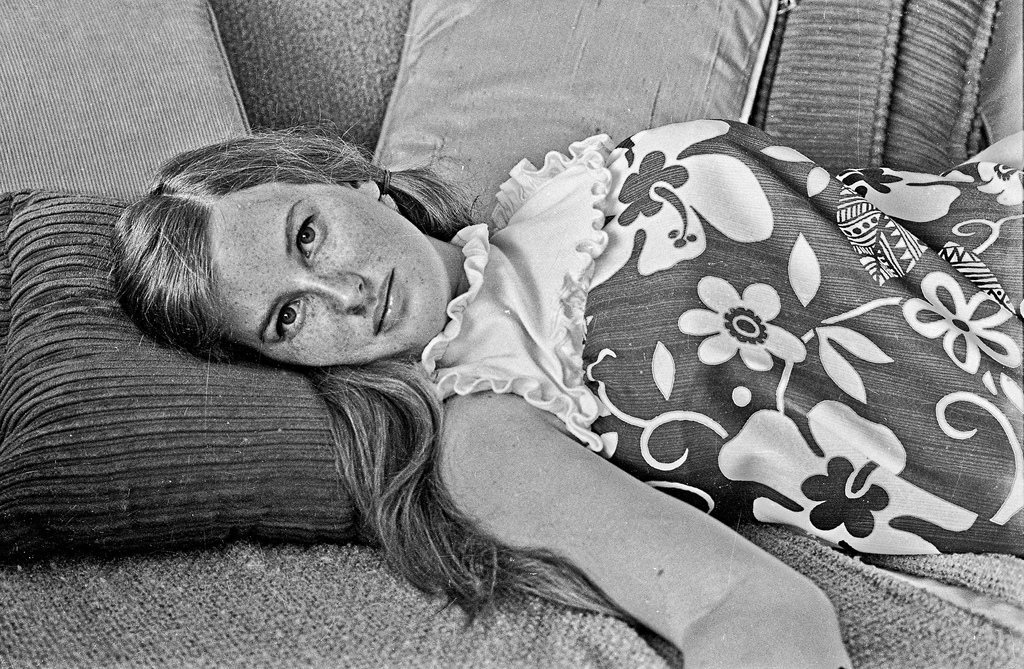 Freckle Face, she made me happy.
A snapshot of my red-head companion on my R and R break during my 1968-69 tour in the Vietnam war. 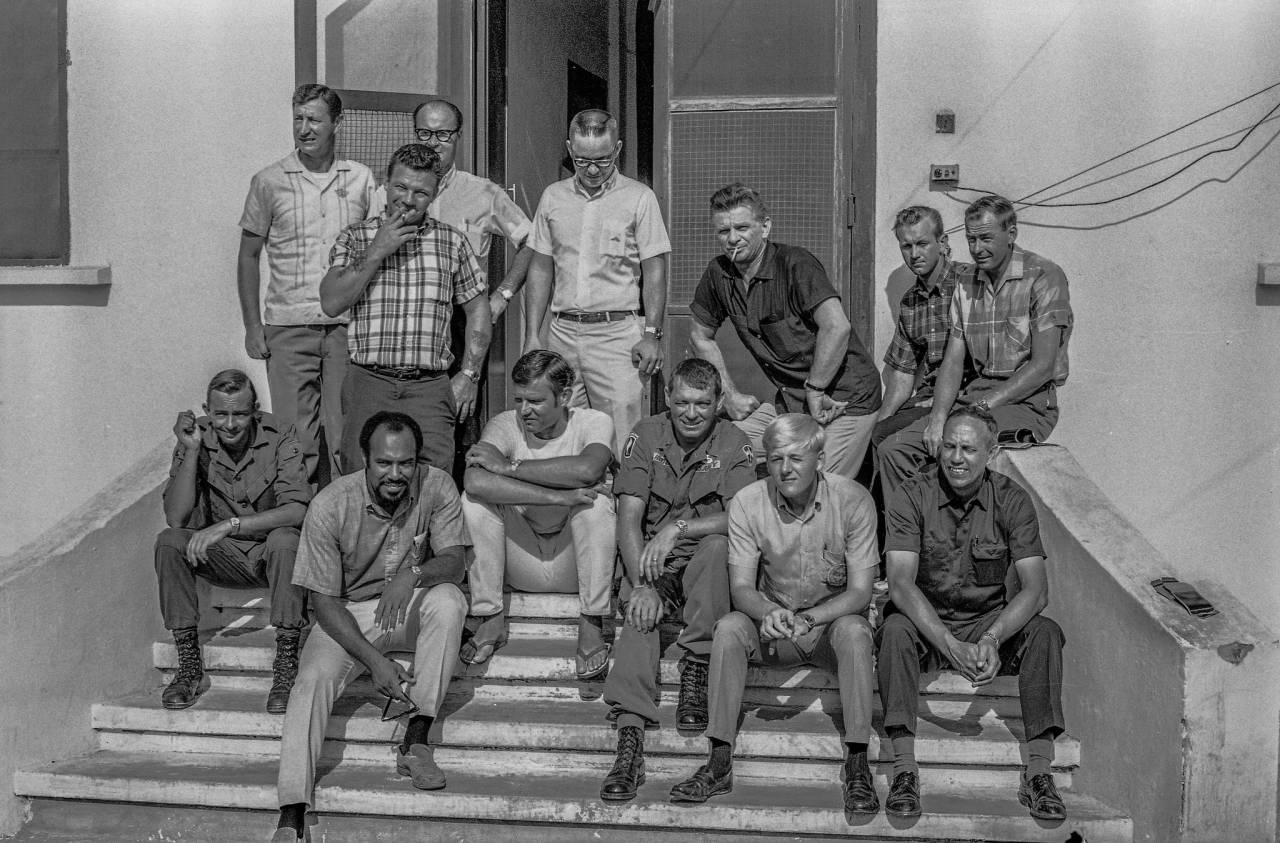 End of Tour gathering for one of the gang–1969
The guy pictured below had come to the end of tour of duty with one of the Intel operations at Embassy House in the City of My Tho, the capital of Dinh Tuong Province in South Vietnam’s Mekong Delta, aka IV Corps. I was not privy to his specific work but I understood that he was a Captain in the U.S. Air Force. He is the one standing on the top step in the middle.
This was the only time during my entire tour that I remember all the crew at Embassy House were gathered for a picture and even then one of the two Navy Seals in our compound were missing. 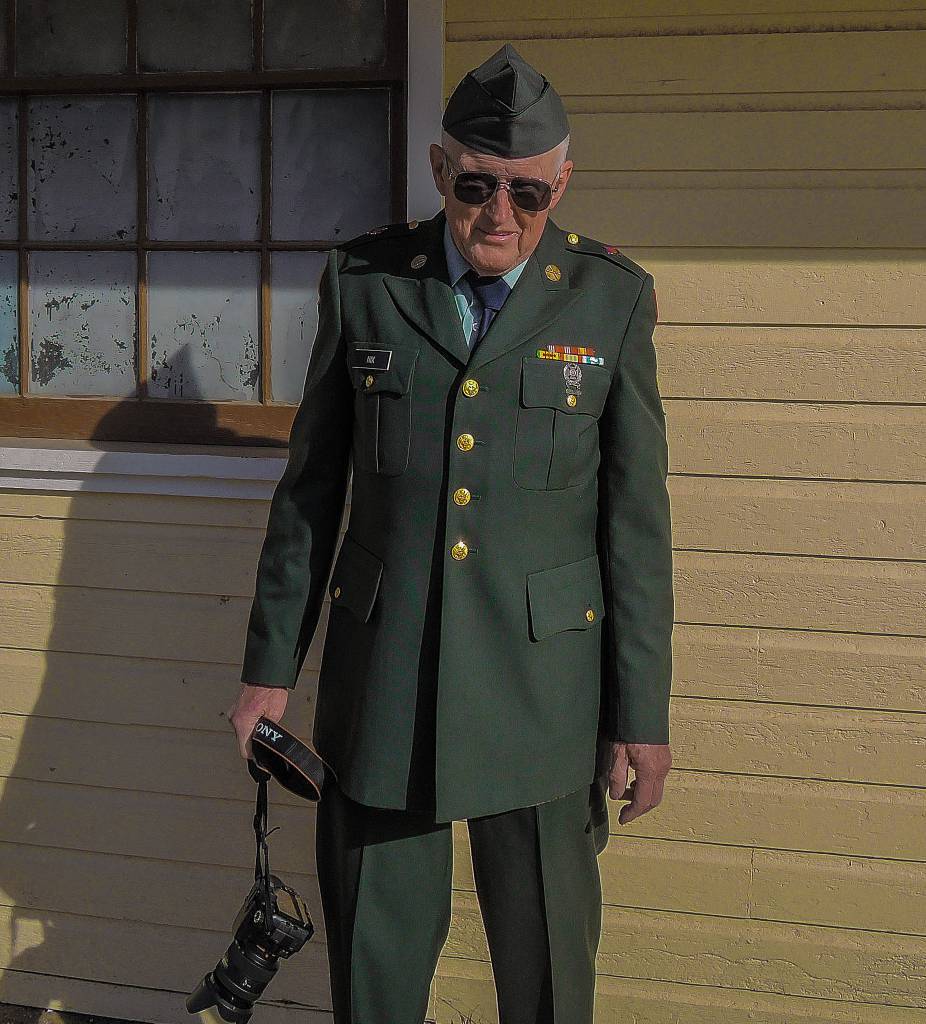 Veterans Day 2014. Fort Ord, CA
Back in uniform 45 years later. How time flies.
At the 5th Annual Veterans Day celebration sponsored by the Friends of the Fort Ord Warhorse and the City of Marina. This years event was in honor of the veterans of the Vietnam War.

If you know anything about the project, please get in touch.