Created by Japanese artist, satirist and political caricaturist Kawanabe Kyōsai (May 18, 1831 – April 26, 1889), these pictures of One Hundred Demons are from a book published posthumously in 1890. This and earlier books of Kyōsai’s popular woodblock illustrations are also known as the The Night Parade of One Hundred Demons.

The night begins with children and adults sitting round the campfire sharing ghost stories. A figure sits by, his brush poised. He extinguishes the candle. And then out of the darkness we see the monsters, ghouls and demons making their way in a procession to the human world.

Kyōsai’s Pictures of One Hundred Demons 1890 – 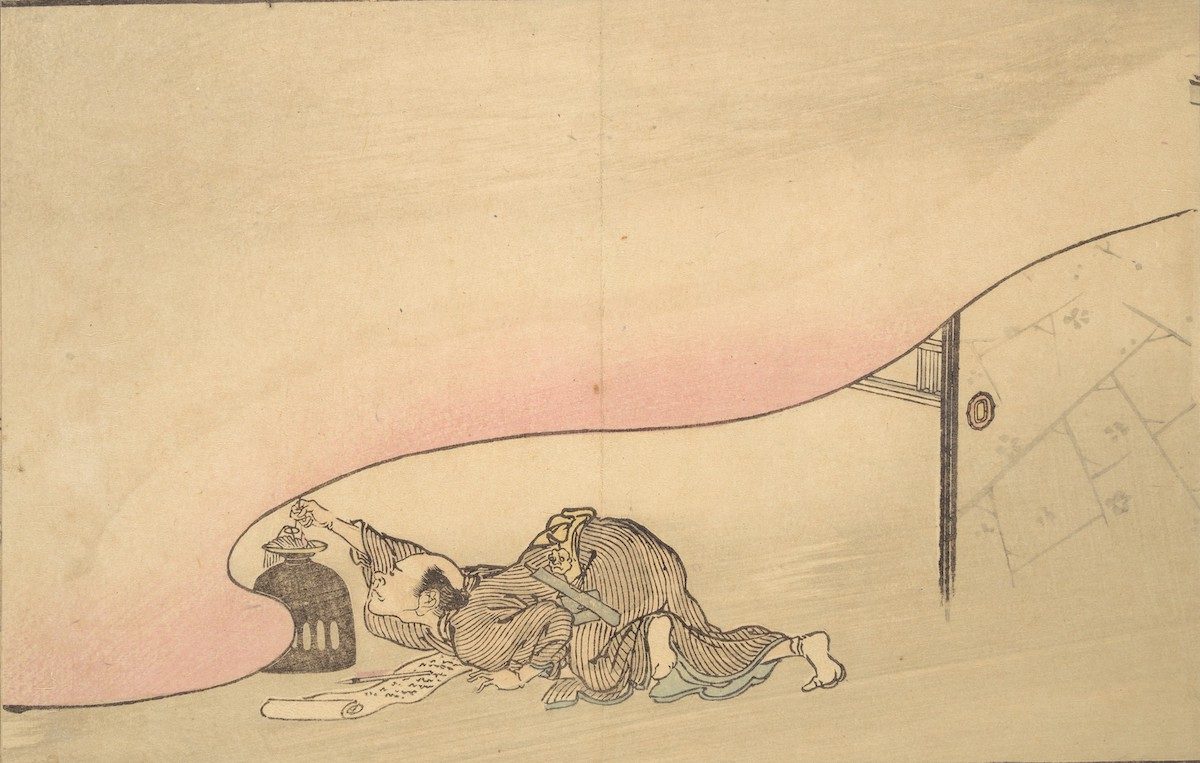 A man, perhaps the artist himself, has set down his calligraphy brush and reaches to extinguish a lamp. Once darkness falls, the demons will appear. 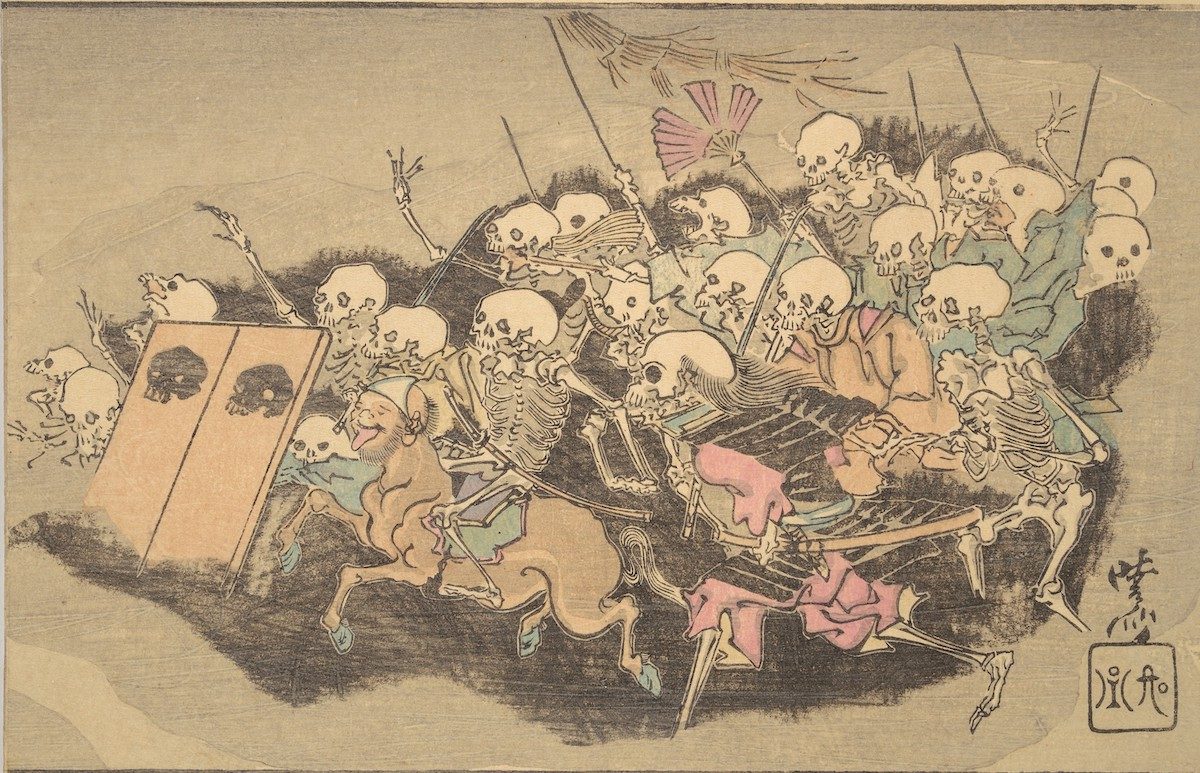 Skeleton soldiers, a horse with the head of a man, and other monsters advance in the growing darkness.

Kawanabe Kyōsai was known by a nickname – ‘the demon of painting’ (shuchu gaki).  Working in a wide range of fields of both ukiyo-e and more classical styles, Kyosai married technical mastery with generous wit.

He witnessed Japan’s transformation from a feudal country into a modern state. He briefly worked with Utagawa Kuniyoshi, who created a wonderful series of demonic woodcuts, before studying at the Kanō school but soon left, frustrated by the emphasis on technique over imagination.

Actively anti-establishment, Kawanabe Kyōsai took issue with the Westernisation of Japan. In the eyes of the West, the country was a crude and barbaric society and the elite classes of the time were eager to adapt to more Victorian tastes. Art was censored, brothels were closed and peasant life was considered primitive. Kyōsai’s response to this was to embrace these crudities and celebrate the qualities that the West disliked. One of the best examples of this can be seen in Hōhi Gassen (1867) – a large scroll that depicts an epic fart battle.

His 1874 woodblock print School for Spooks, No.3, from the series Drawings for Pleasure, portrays demons sat at tiny desks and dressed in ill-fitting Western clothes. It’s a satire on the compulsory education system the Meiji government had introduced in 1872. The right people were offended. Kyōsai scored a prison sentence, plus 50 lashes. His art would earn him two further stints in choky. It’s that good.

A one-eyed, malformed goddess, Benzaiten, is accompanied by an elephant, reptilian monsters, and, at left, the fierce Buddhist guardian Fudō Myōō holding a sword.

Ritual implements such as a monk’s fly whisk, boots, and a Buddhist gong become monsters. 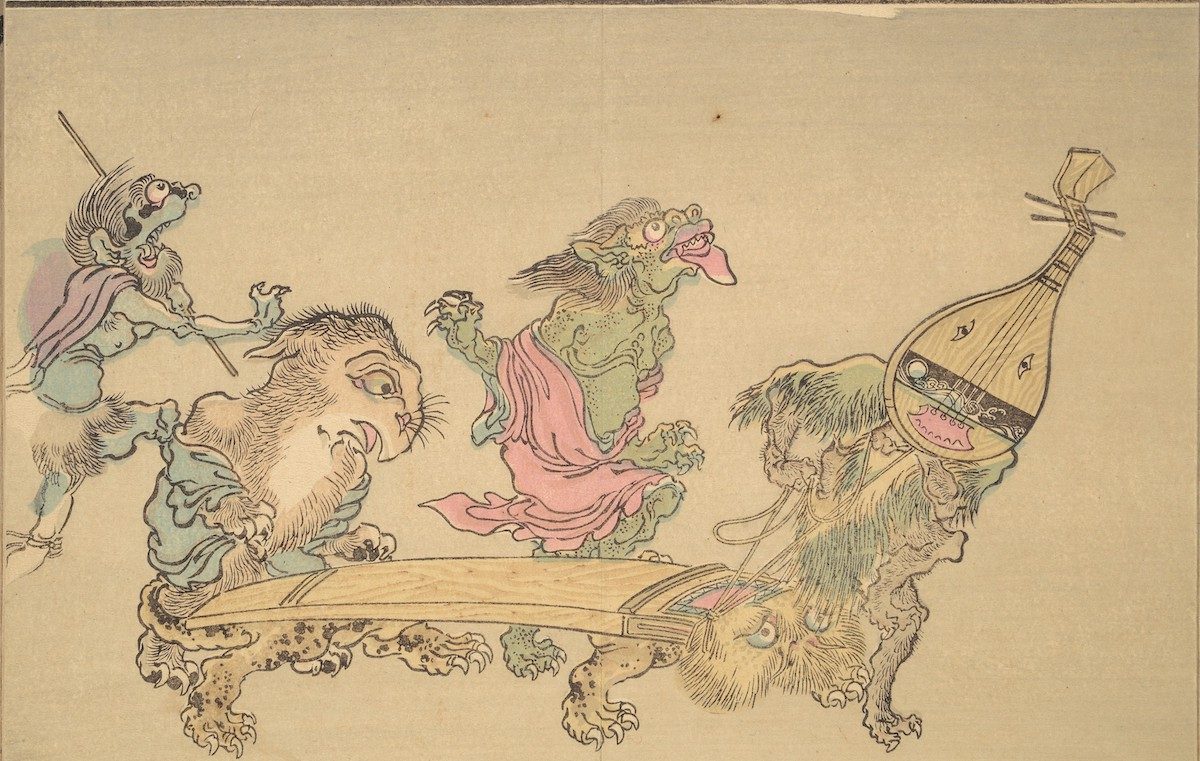 At right, a demon with a large nose and wings (tengū) carries panpipes (shō) and a pilgrim’s staff. His servant follows in wooden clogs (geta), with a wolf-like head and gaping mouth. 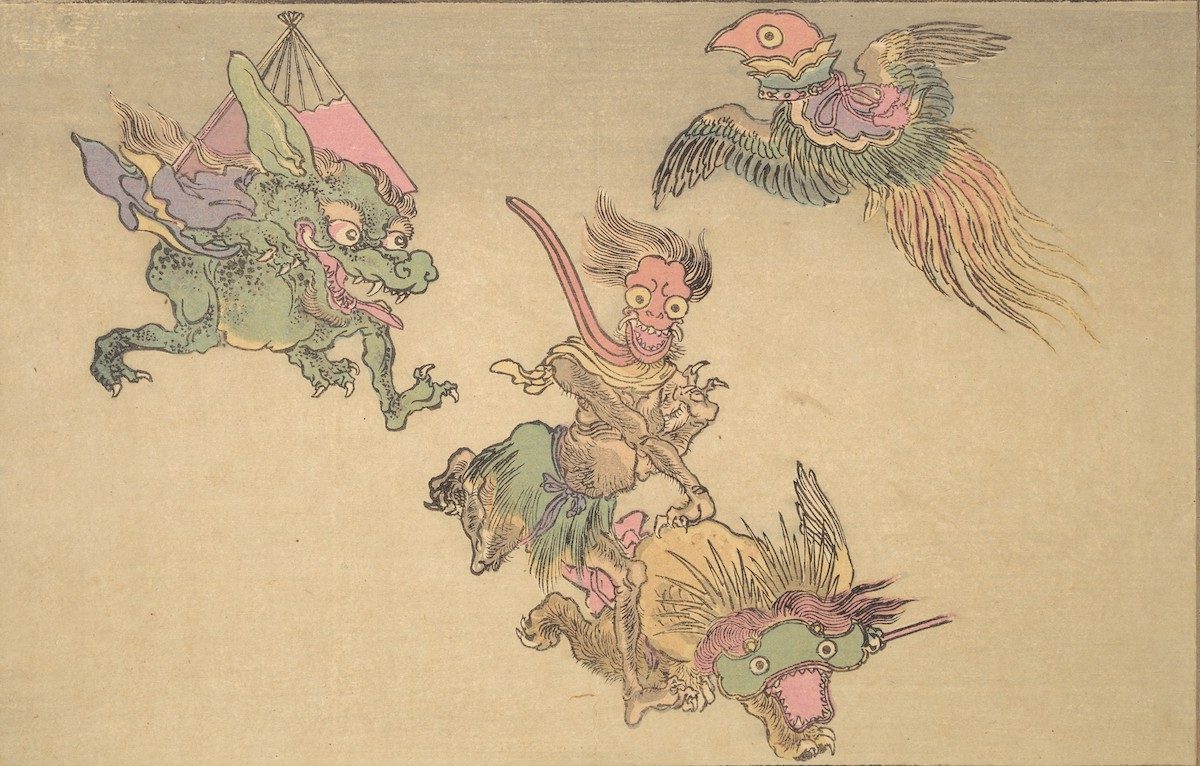 A helmet for a court dance (bugaku), a chime (kei), ritual scepter (nyoi), and a folding fan turn into flying and running demons.

At right, a monster grips a feathered spear. An ogre follows, wearing a nobleman’s cap (eboshi) and carrying a similar spear. 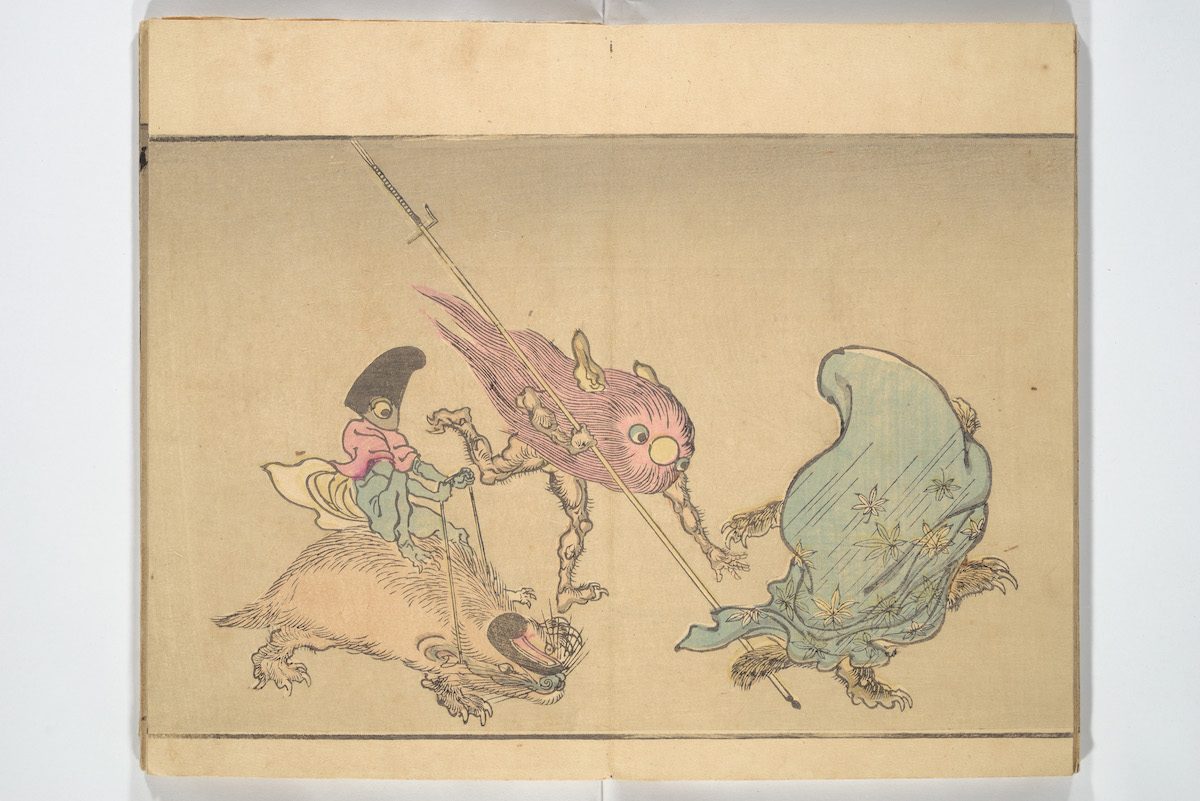 At left, a small demon riding a badger with a stirrup on its head follows a hairy headed demon and at far right, a shrouded, furry animal.

At right, a horned demon bears a spiked spear. At left, a beaked demon wields a wooden mallet over a one-eyed red demon’s head.

At left, a monster holds up a mirror for an Otafuku-esque ghoul to apply black dye to her teeth. At right, a chubby faced figure carries a bag beside a three-eyed ghoul.

Animal demons, including one resembling a mad Shinto priest, carouse on an enormous bolt of cloth. A clawed monster hides underneath.

At left, a beaked demon holds an umbrella monster, followed by a rope monster riding a hobbyhorse, and a hairy monster with a long, horned snout (kirin).

Everyday kitchen utensils such as lids, pots, and trivets have turned into monsters.

Monsters, including a badger wearing a courtier’s cap, carry Buddhist ritual implements, such as a magical scroll inscribed in Sanskrit, at far right.

Several monsters, continue the procession, including one with a Buddhist monk’s alms bowl on its head.

A row of demons, some with banners, another with a gourd-like head, march forward.

A group of rowdy ghouls appears, including, at far right, a demon in a red robe with a hand scroll. 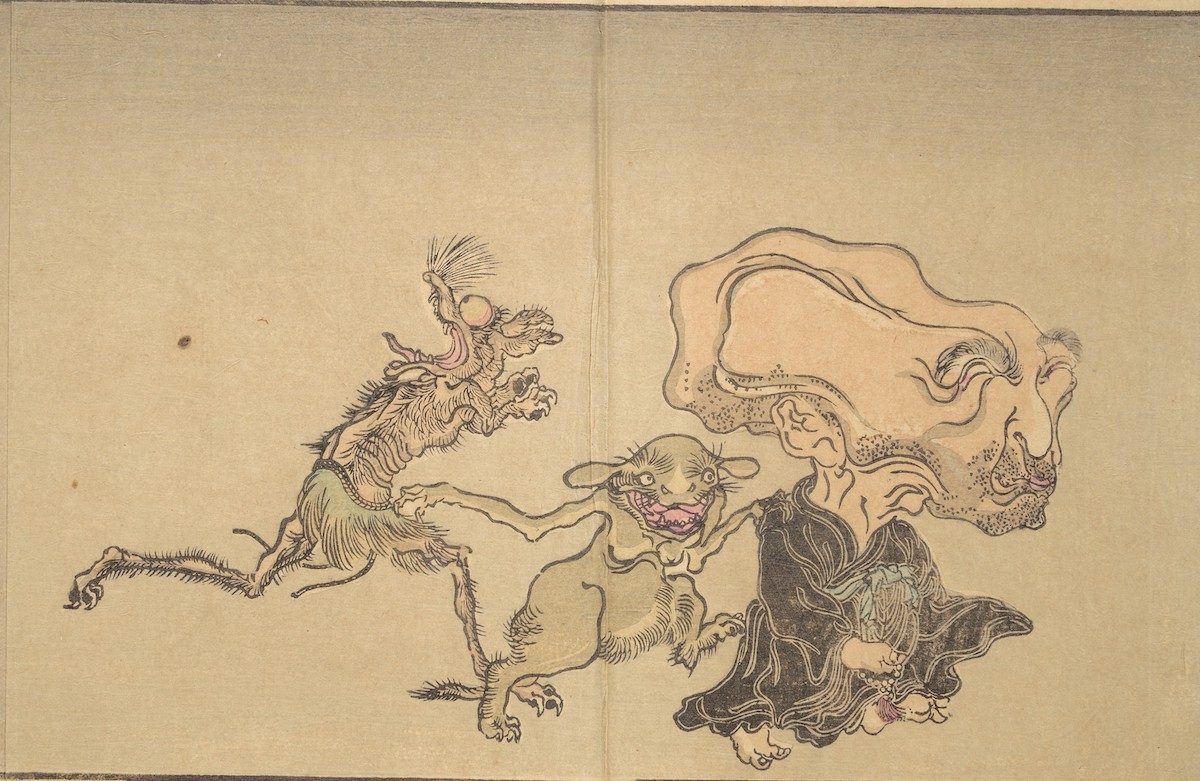 At right is the demon Nurarihyon, in the guise of an old man with a huge head and Buddhist rosary. He is followed by rodent-like monsters.

Frightening beasts have features, from left, of a hag, an elephant, and a rabbit.

A green dragon chases demons, including a winged hag, at right, who is embracing a tiny creature. Below, a pink one-eyed monster wears a grass skirt.

Under dawn’s red sun, the parade of demons ends. From left: the one-eyed Aobōzu, who kidnaps children, a water dwelling creature (kappa), and Nuribotoke, a Buddha-like demon with dangling eyeballs.

Via: Kawanabe Kyōsai at The Met 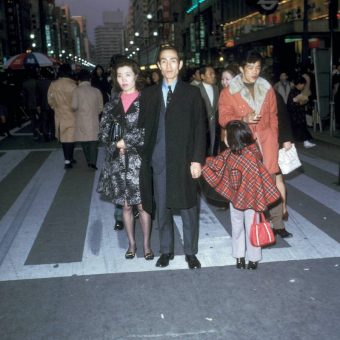