A while back, I discovered an old Josie & the Pussycats dealing with satanic possession.  An odd find to say the least.  What the hell was up with Riverdale in the 70s?

Take note this this wasn’t a “special issue”, parody, or any of that “let’s give Riverdale an unexpected makeover” stuff they’ve been churning out the last few years.  No. This horrific tale of satanic possession was sandwiched right in there between the standard kiddie fluff we come to expect from Archie comics… making this all the more disturbing.

Let’s have a look at this beyond-bizarre moments in Archie comic history from Josie & the Pussycats Issue #72, from October 1973. 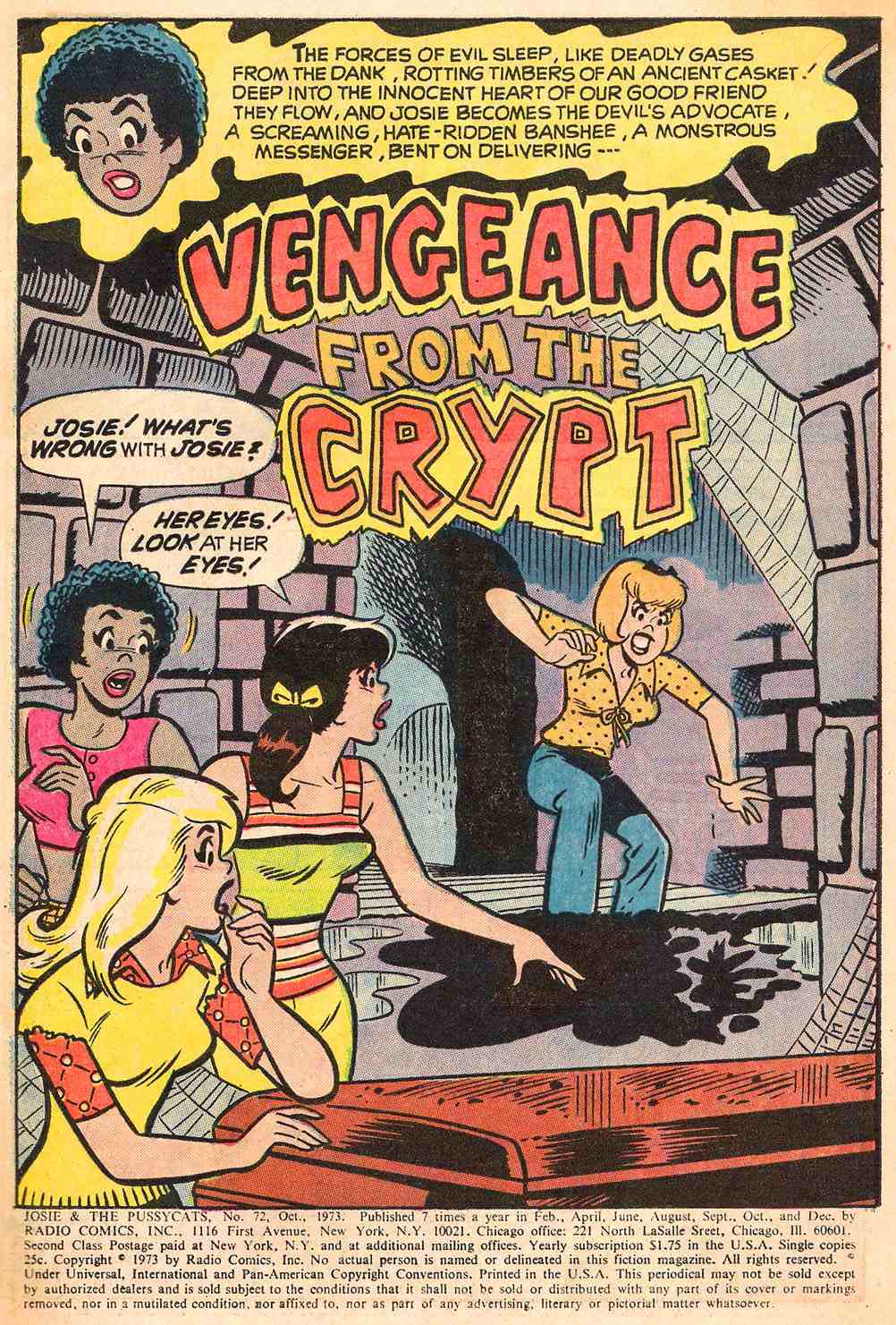 It’s not just that a beloved Archie comic character’s soul is being tortured by Satan that makes it so unsettling; it’s the description:”Josie’s face contorted into a mask of indescribable evil.” It’s as if William Peter Blatty took over the writing. but the illustrations were still in that lighthearted Dan DeCarlo style…. which makes it all the more disturbing.  How dare the writers have Josie possessed!  Yet, possess her they did. 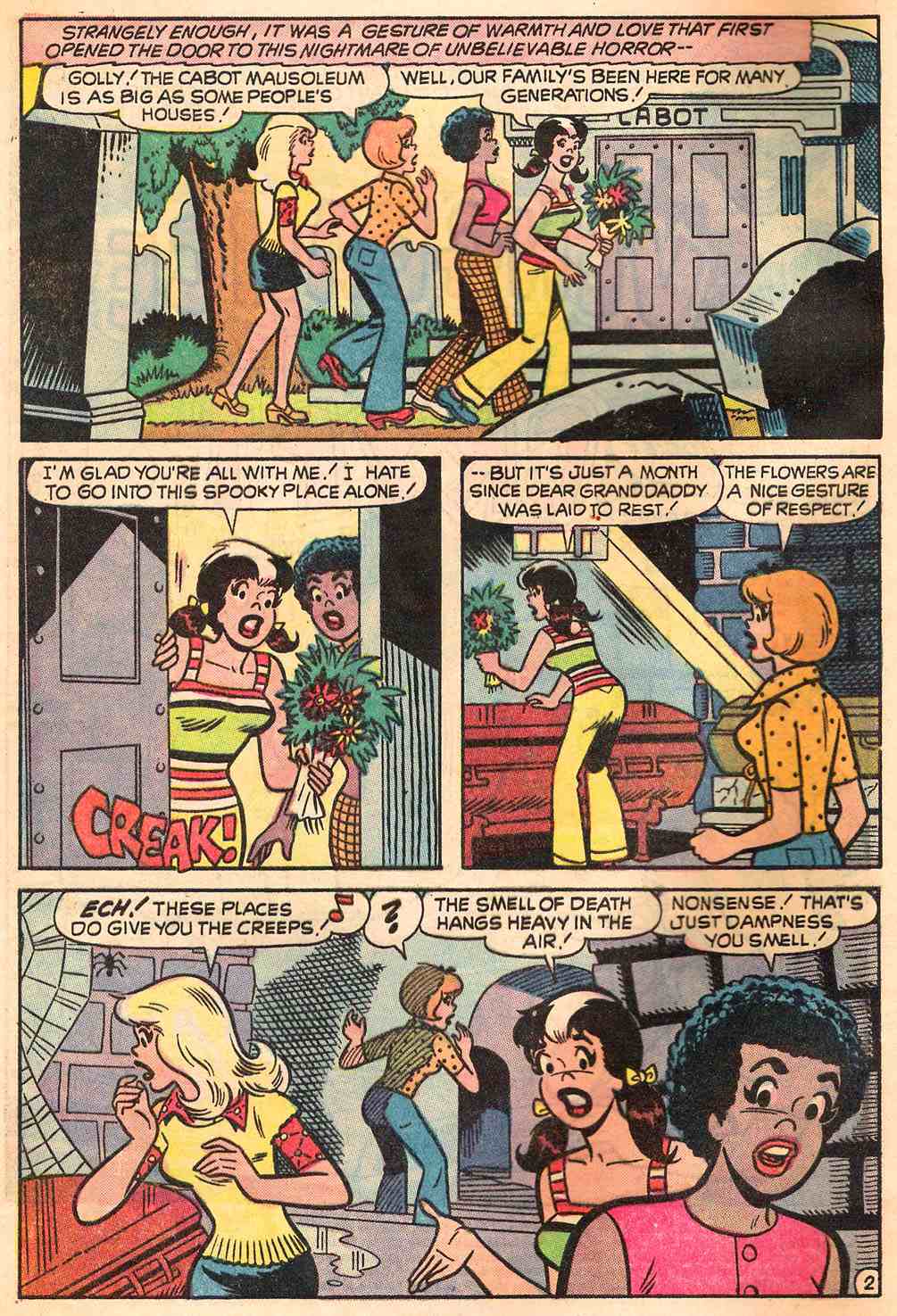 “The smell of death hangs heavy in the air.”…. not the type of statement we’re used to hearing in the Archie universe.  Something is up. 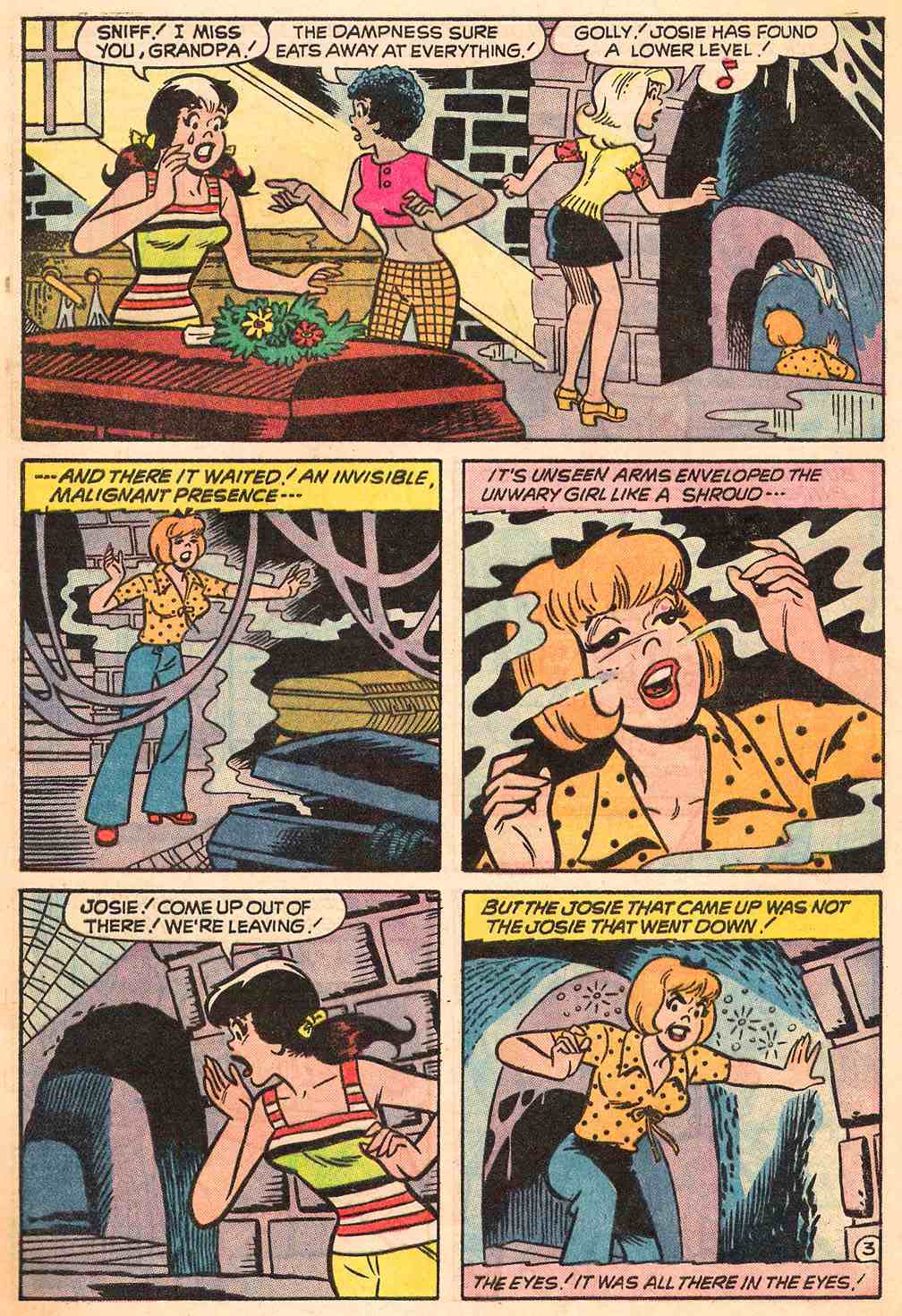 “The eyes! It was all there in the eyes!”

What in the ever-lovin’ f**k?!? Imagine being a little kid in 1973 and reading that Josie is possessed by a “malignant presence”. 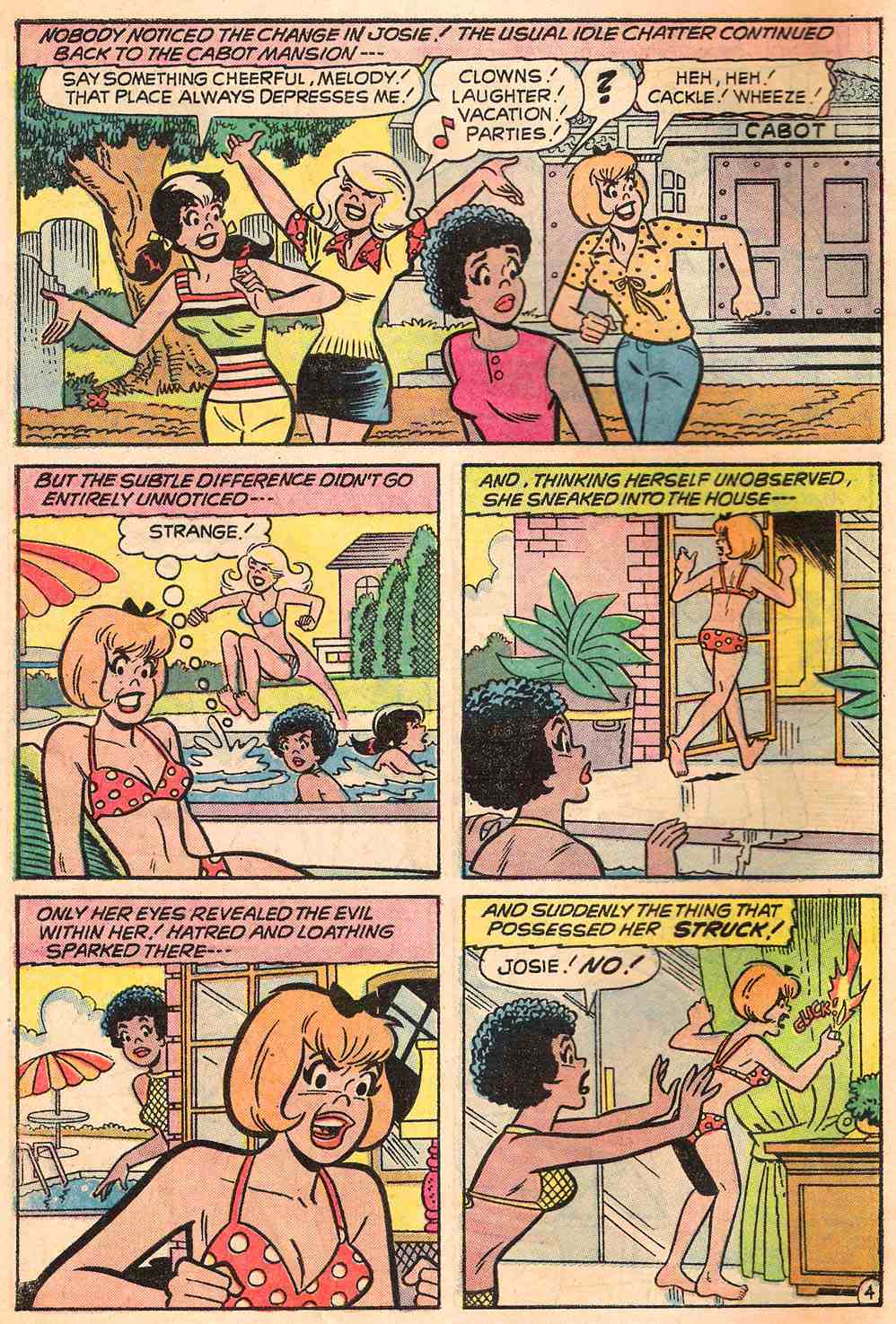 “ONLY HER EYES REVEALED THE HATRED WITHIN HER! HATRED AND LOATHING SPARKED THERE!” 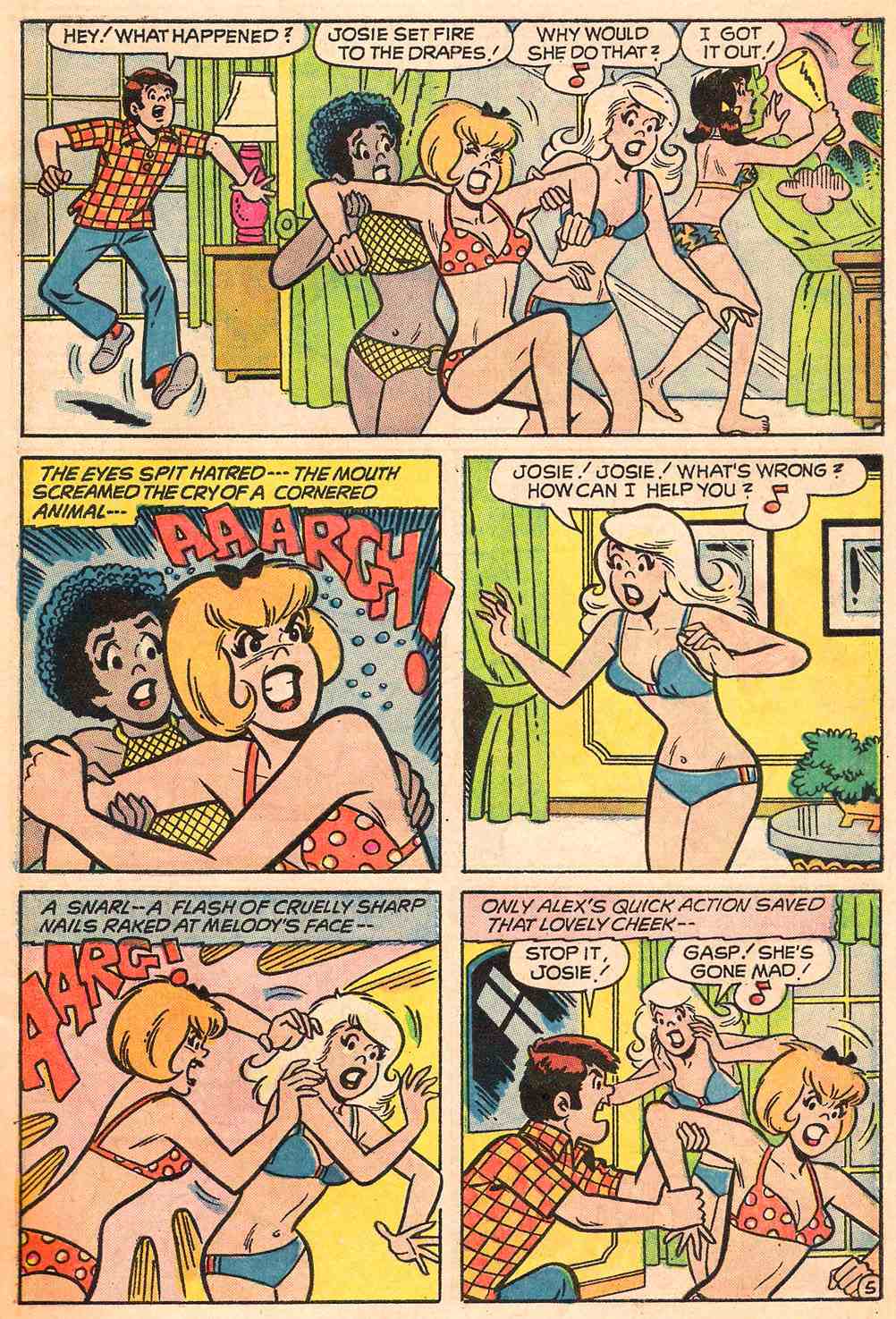 Good God!  Josie has set fire to the drapes and is now clawing at Melody’s face! 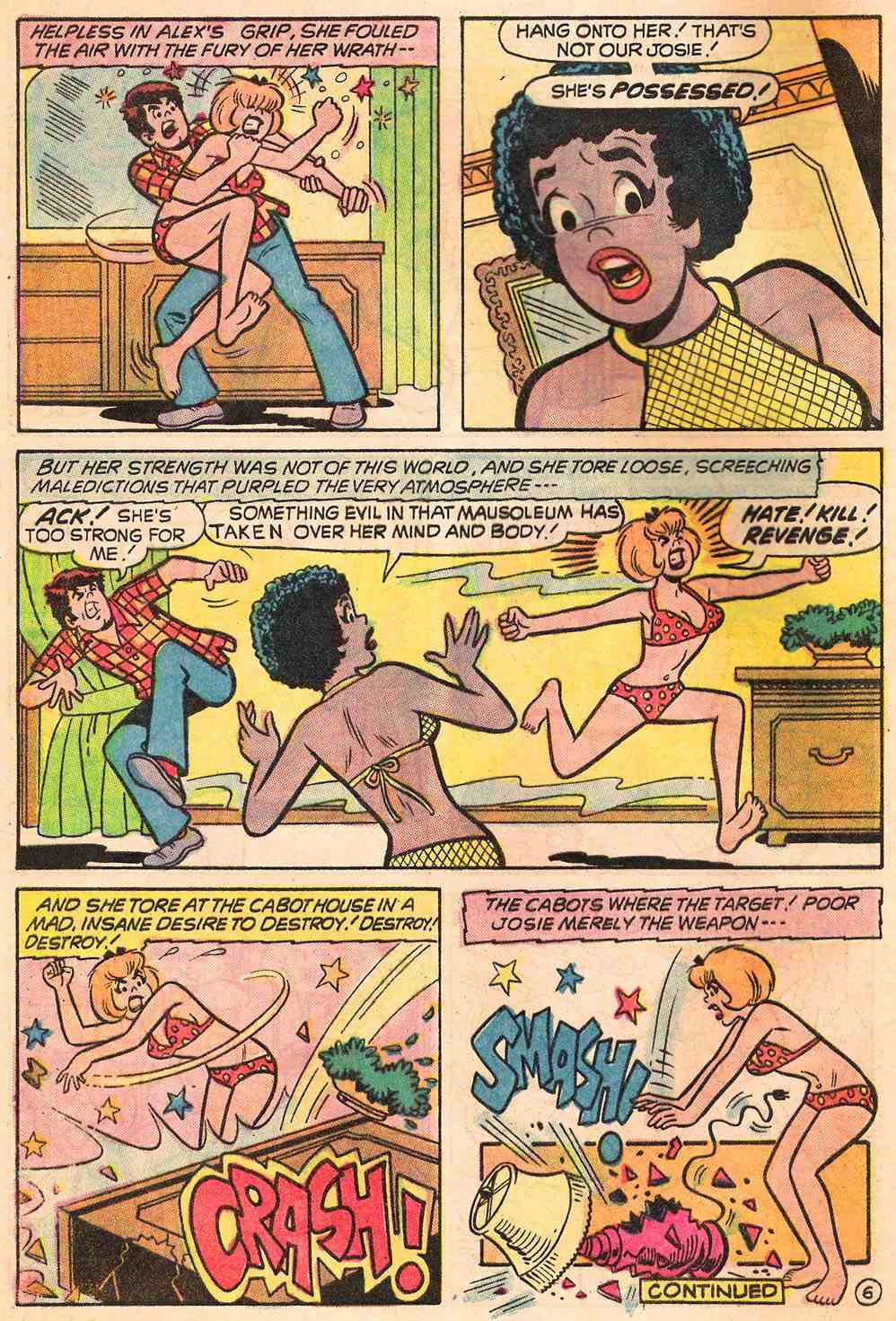 There’s just something about seeing Josie running around in a bikini yelling “HATE! KILL! REVENGE!” that rocks my world. 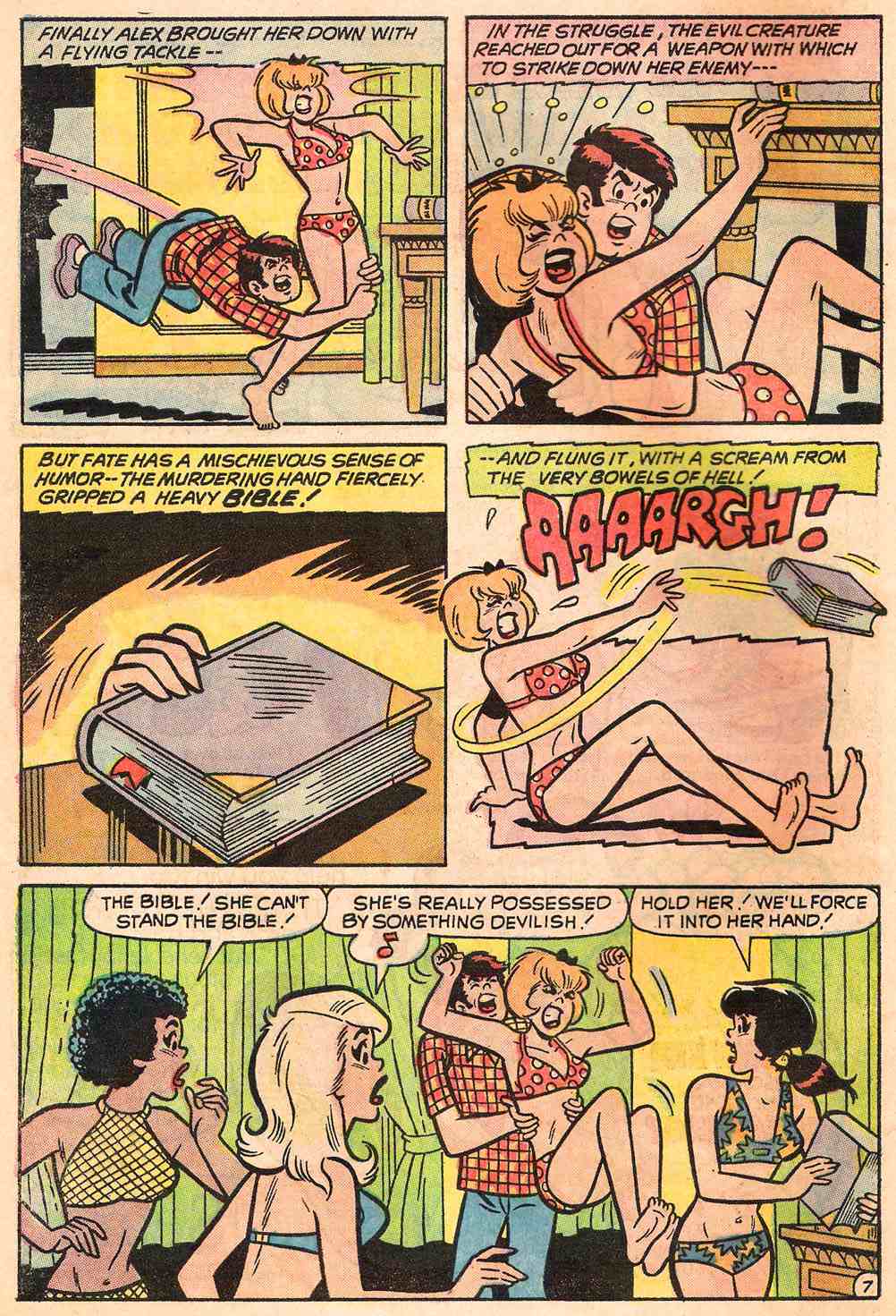 The fact that Josie is repelled by the Bible might lead you to think this was a Spire Christian Comic (an evangelical Archie offshoot that was strange in its own right).  But this is just plain-old classic Archie…. with demons. 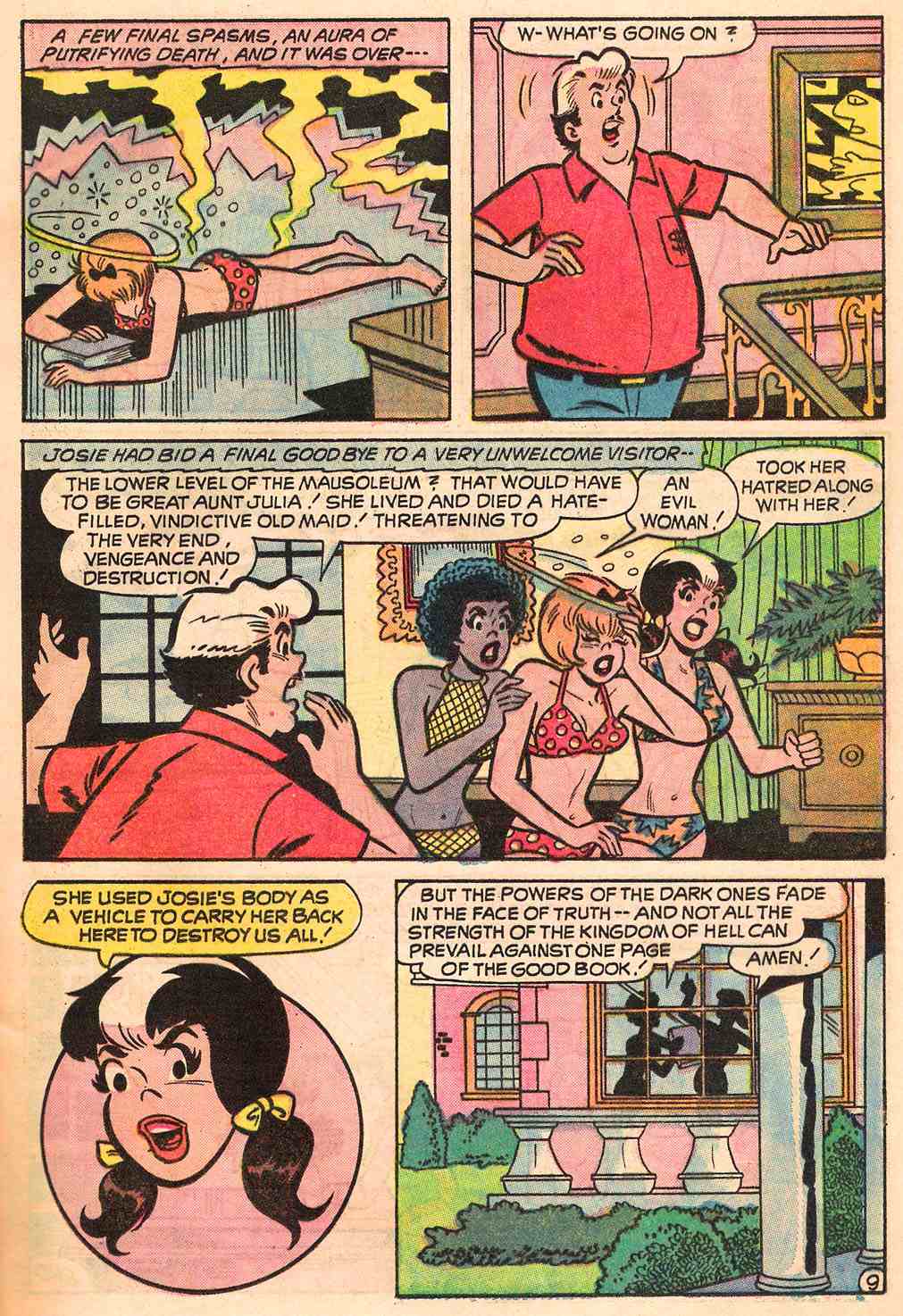 Whew! Josie is saved.  It turns out she was possessed by her great aunt. 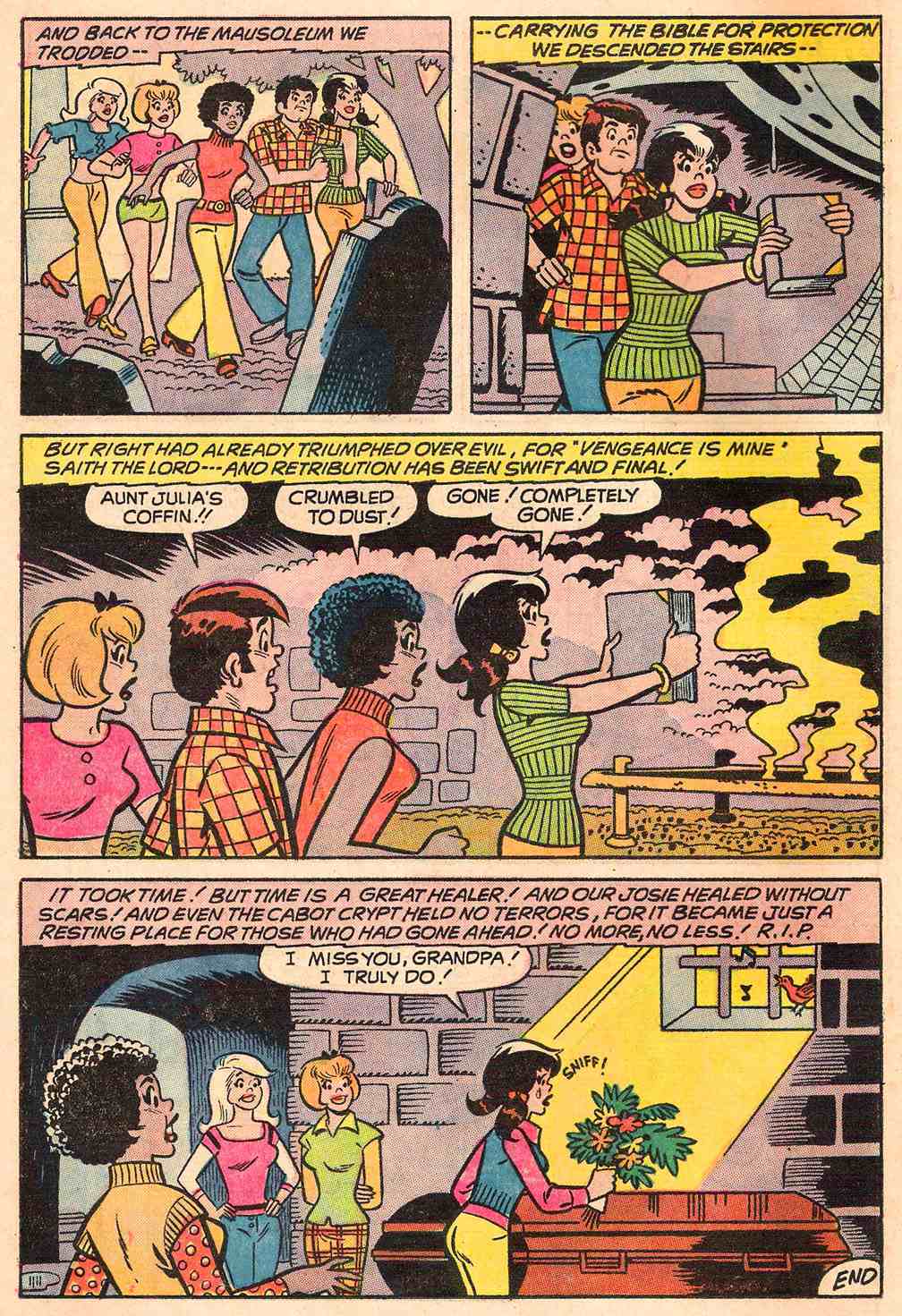 Well, that was a wild ride.  I suspect someone in a board room said – “Josie & the Pussycats is now a Saturday morning cartoon.  Scooby-Doo is successful, so make it like Scooby-Doo with lots of ghosts and shit.”  The writers followed their marching orders, but alas, they went a bit darker than should have.

If only this were their only walk on the dark side.  Archie comics had a few other dances with devil, but not quite so twisted and insane as before… 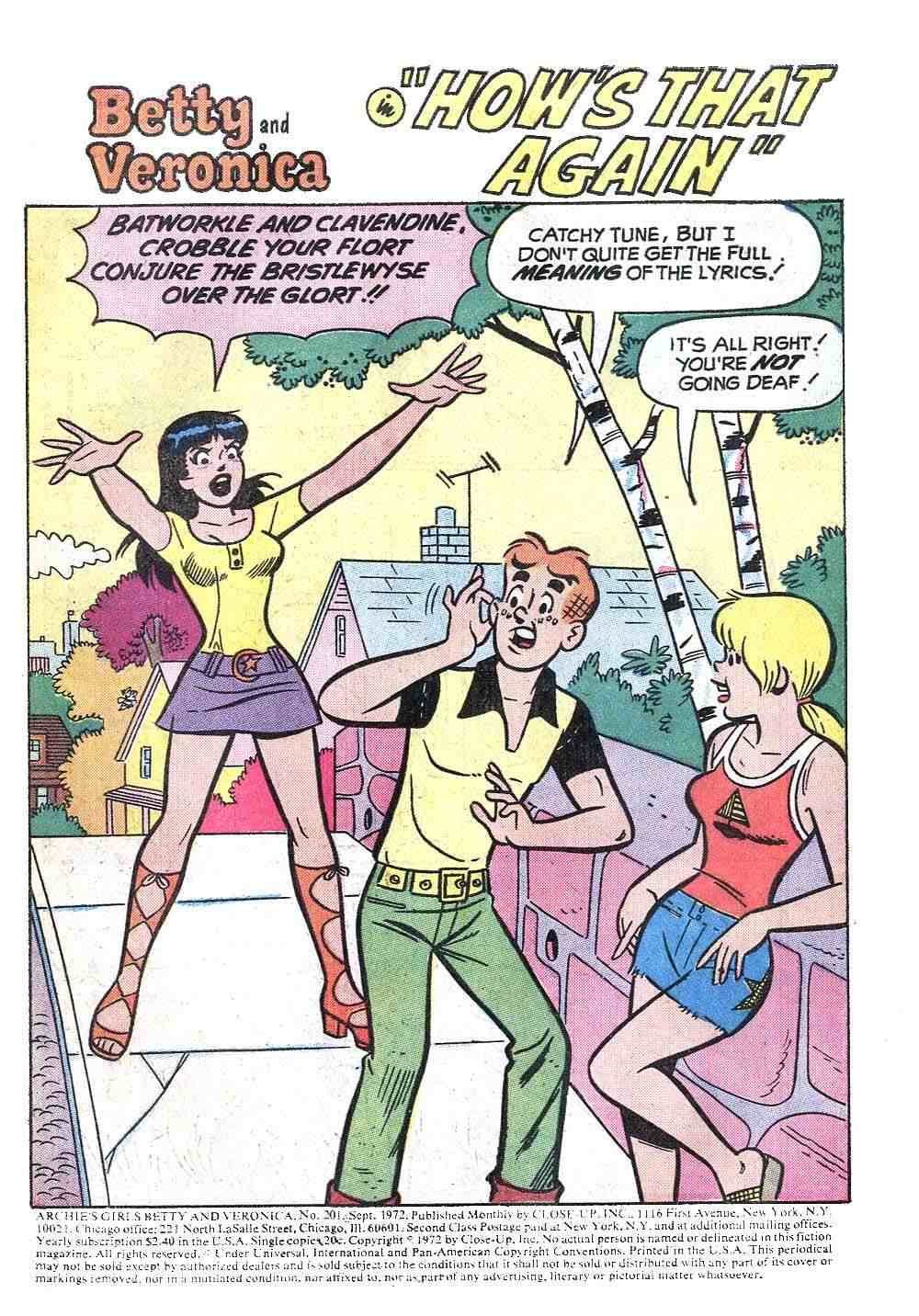 In the comic Archie’s Girls Betty & Veronica, Issue No. 201, from September 1972, we find Veronica getting possessed by an ancient magician. 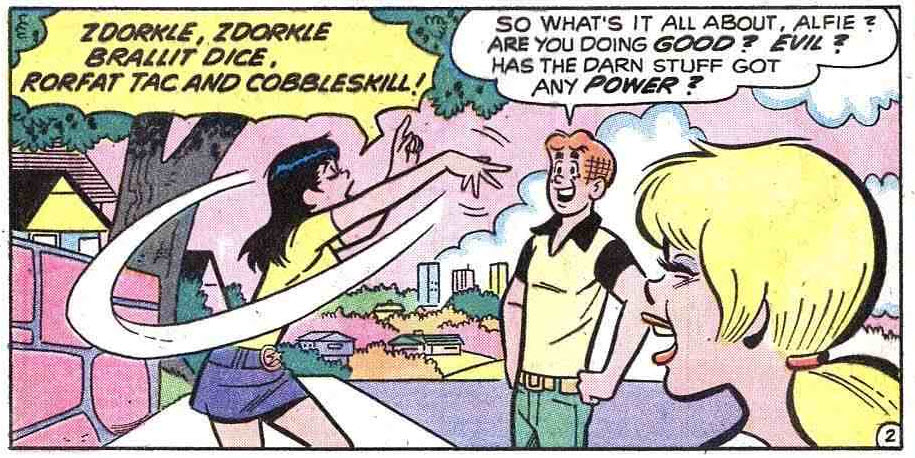 There’s a joke in here somewhere; but, it gets lost amid Medieval curses and satanic incantations. Throughout the whole comic, Veronica is spouting demonic spells in some lost cursed tongue. I get the distinct feeling the author didn’t think through the whole gag and it got away from him. 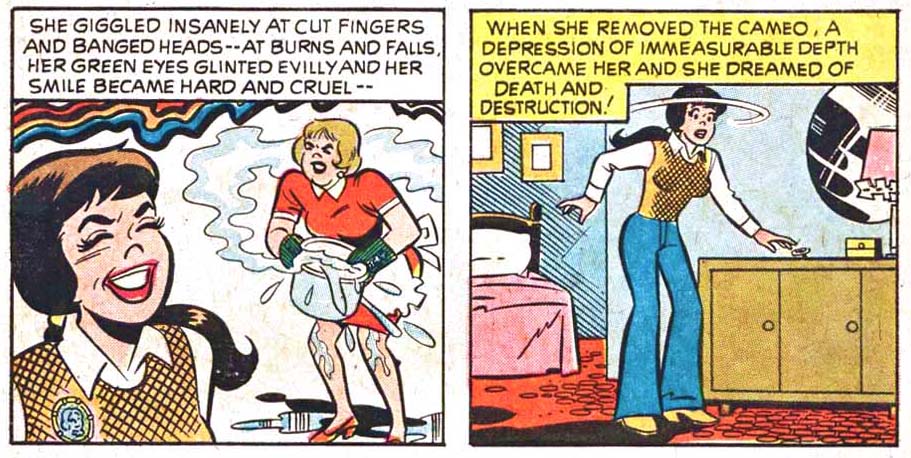 This story gets every bit as dark and unholy as the Josie comic, but I’m not quite as shaken to the core because it doesn’t involve a beloved Archie character getting possessed.  Instead, it’s a story told by Sabrina the Teenage Witch. 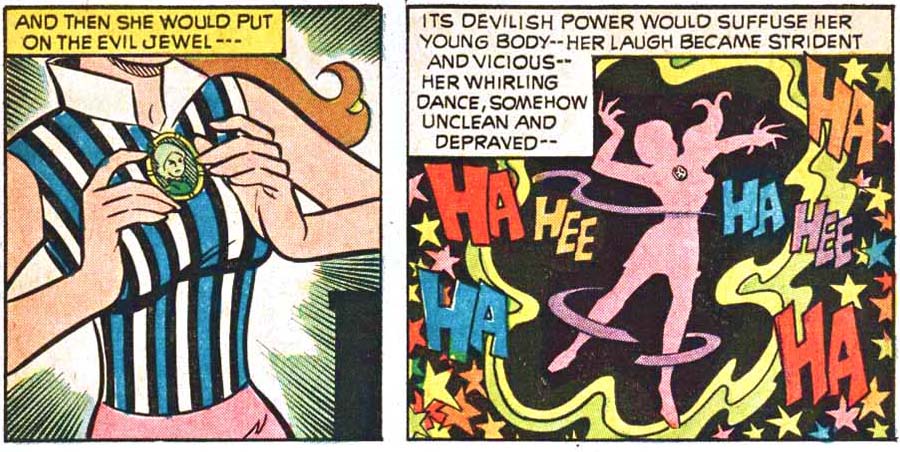 The words “unclean and depraved” do not belong in an Archie comic. Once this girl puts on the jewel, it becomes abundantly clear that this comic book chick has been possessed by the “Father of Lies, Prince of Darkness, Bringer of Death”. But, as in the Josie story, she is finally saved by the power of the Bible. 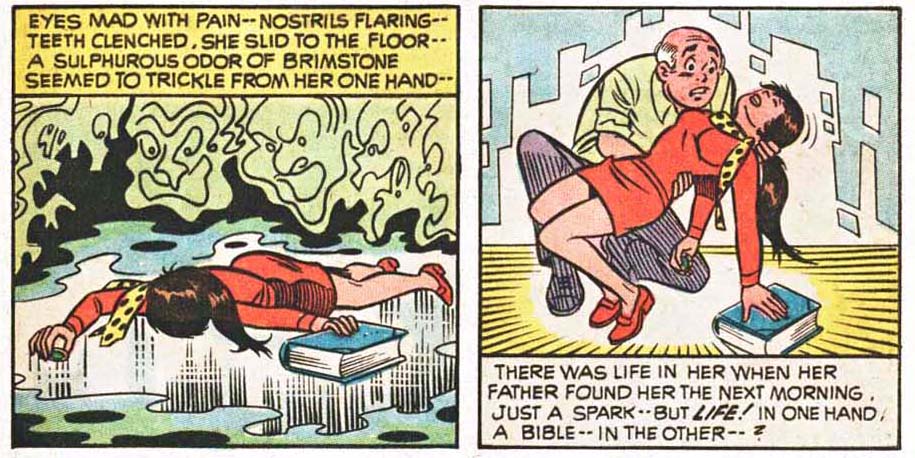