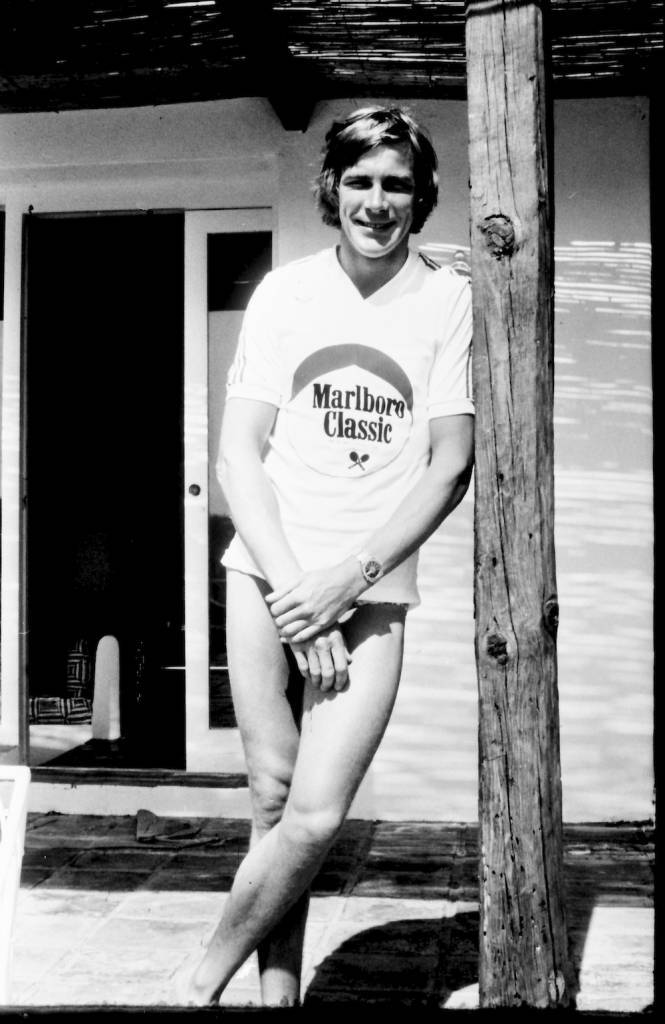 The English car driver James Hunt on the circuit of ‘Jarama’, 15th May 1972, Madrid, Spain. (Photo by Gianni Ferrari/Cover/Getty Images)

James Hunt’s talent as a F1 driver is often overshadowed by tales of a lifestyle in which sex, drugs and drink played no small parts. This was Hunt, who as part of preparations for the 1976 Formula One championship tasked himself with squiring 33 British Airways stawardesses at his Tokyo Hilton suite. As fellow driver Stirling Moss quipped:  “If you looked like James Hunt, what would you have done?”

“I trained like mad,” said Jody Scheckter, the 1979 world champion. “I didn’t have sex for three days before a race. I don’t know how you’d be more professional than that. I had parties, just not when I was racing. Niki Lauda didn’t do anything, at least that he talked about or that we saw. But James was outrageous. I remember racing in Japan, where they were very formal in those days. There was an event with different speeches from high-level people and he walked on stage with no shoes on, jeans with holes in and an old T-shirt. He was playing up to this English public schoolboy stereotype.

“What was it he had embroidered on his overalls? ‘Sex, breakfast of champions.’ Some girls like a rogue and he let it hang out in that respect. He was a boy, you know? I out-charmed him once. They must have been mad.”

You do what you can to calm your nerves. Legend has its that in the build up to a race Hunt would vomit and then shake so violentely his car would rock.

“They called him ‘Hunt the Shunt’ but I never saw him as this daredevil,” adds Scheckter. “We went to America and on the ovals he just didn’t want to do it, it scared him. He wasn’t this macho, do-anything driver he was made out to be.

“I picked him up after a race at Watkins Glen in New York and he hadn’t bathed or slept. He got into the car and he stunk, so I hung my head out the window the whole way to the airport. Was he having a good time? I don’t know.” 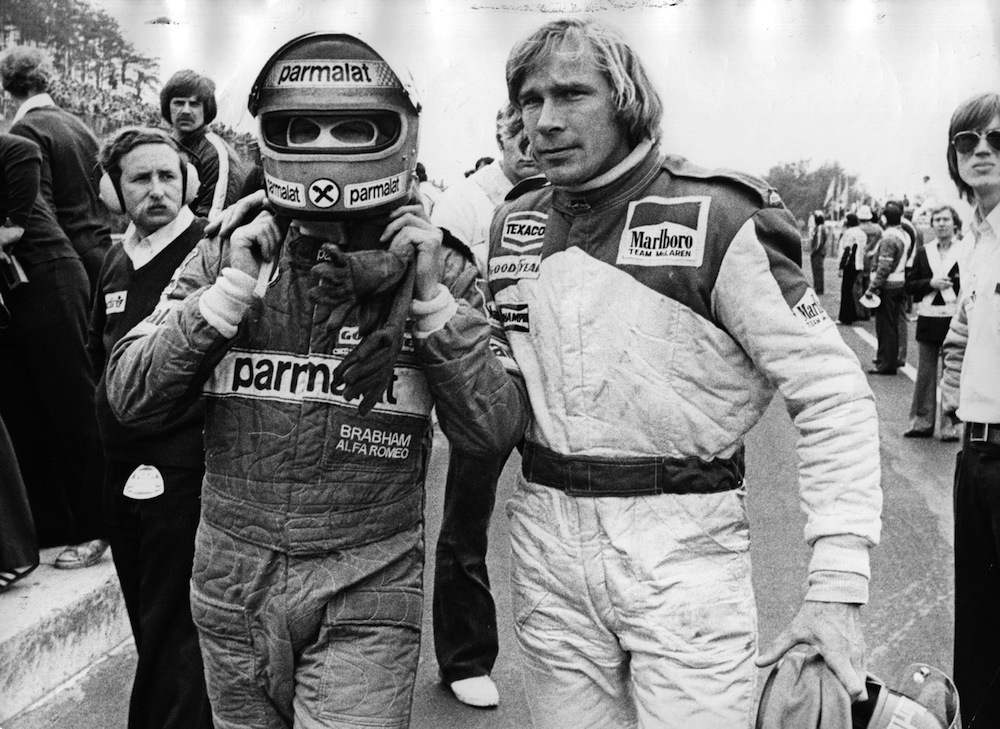 British racing driver James Hunt (1947 – 1993) and Austrian Niki Lauda abandoning the race after they have crashed into each other. Original Publication: People Disc – HG013 (Photo by Hulton Archive/Getty Images) 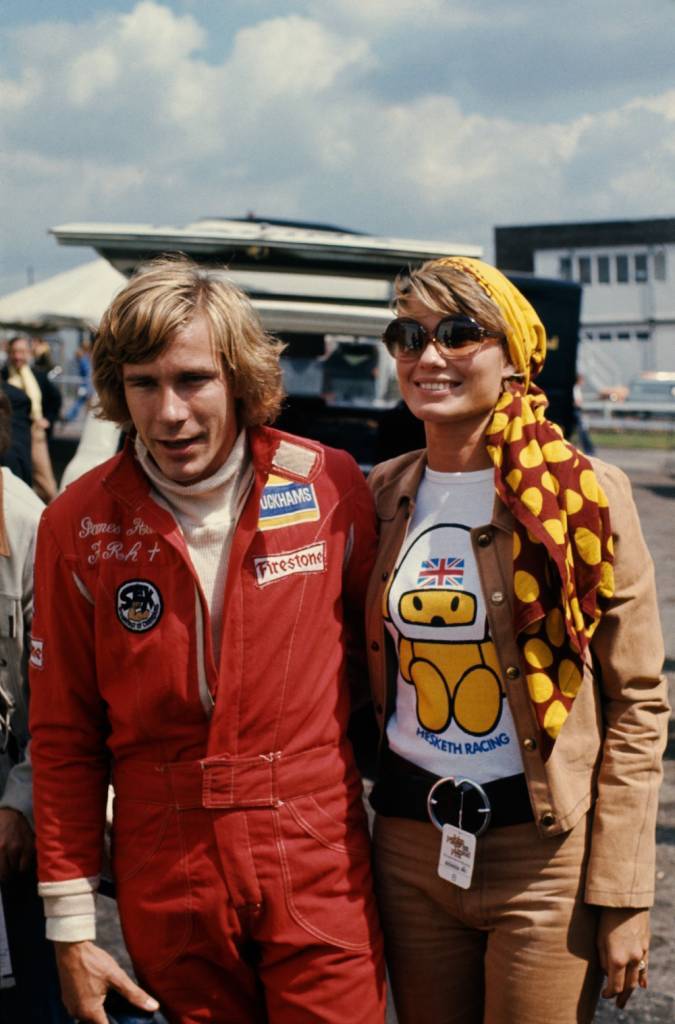 Hunt was married first to Suzy Miller, a model who would later marry the actor Richard Burton. Hunt told Burton: “Relax, Richard. You’ve done me a wonderful turn by taking on the most alarming expense account in the country.”

As Hunt’s mother observed: “Suzy is gorgeous, but I can see that for James to be married is impossible. I love him, but I’d hate to have him for a husband.” 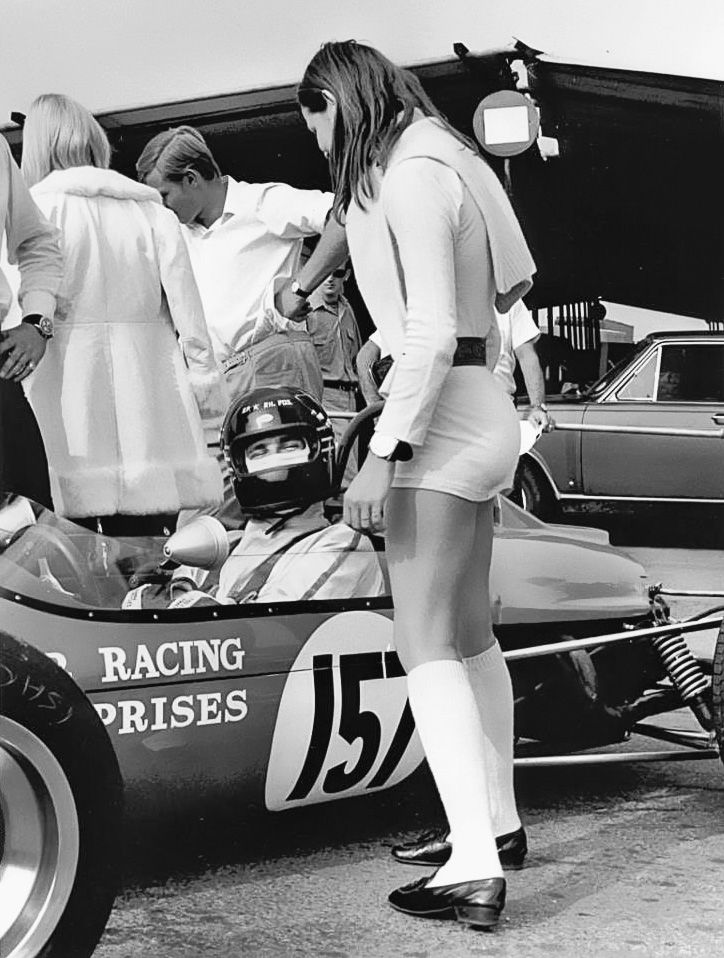 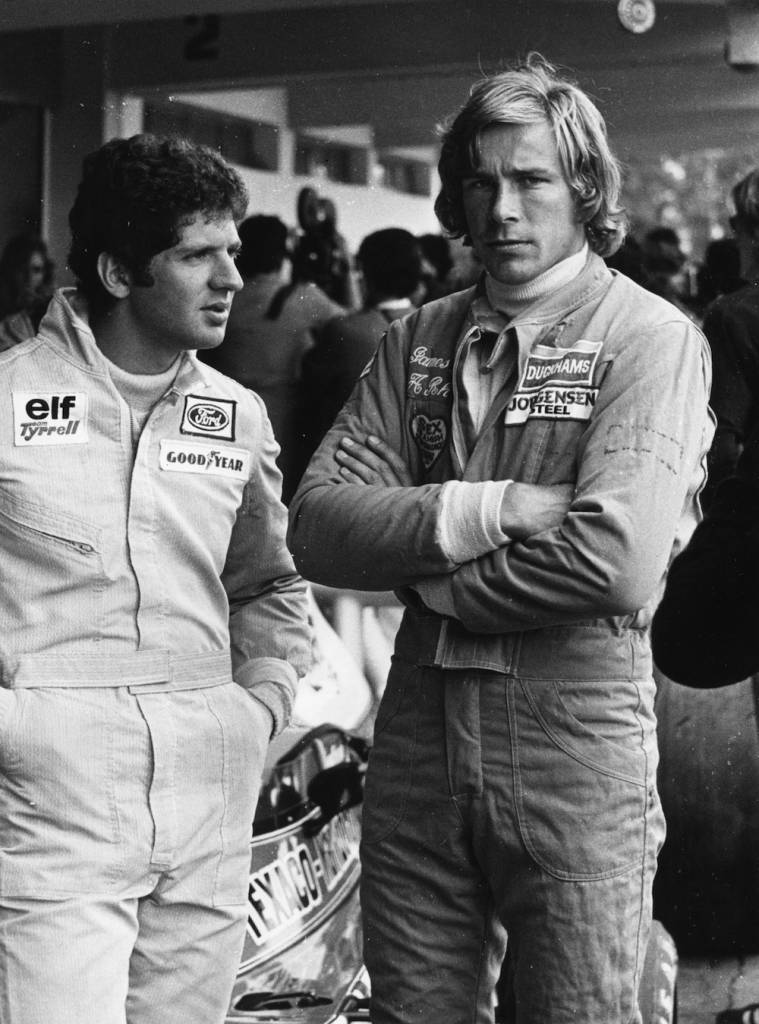 “On the track, he said, Hunt was a tough competitor,” said Lauder. “There are good drivers and bad ones and then there are the really talented ones who are difficult to beat and James was one of them. We respected each other very much because in the old days, to drive 300 kilometres an hour side by side towards a corner, if someone makes a mistake, one or both are killed. Hunt was someone you could rely on to be really precise.

In 1976, the champion spoke with Bill Wigmore. It’s a long video – you might just want to skip to the adverts…

Hunt stayed with McLaren for two more seasons, before racing with Wolf and retiring in 1979. 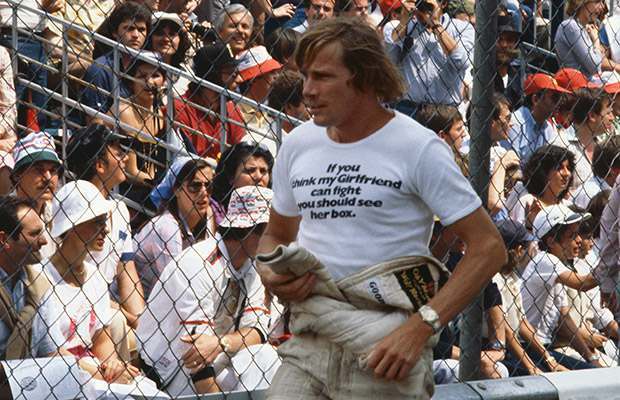 Throughout much of his career, Hunt dedicated the right front breast of his racing suit—prime advertising real estate most sponsors would pay dearly for—to a round patch emblazoned with the image of a flexed arm muscle and the words, “Sex, Breakfast of Champions.” Later he would swap the patch for a more dignified one declaring, “Sex is a performance thing.”

A career in media followed.

In 1980 he worked as BBC pundit alongside Murray Walker. For his debut broadcast, Hunt drank two bottles of wine. Nerves, you see. He soon settled into the role and became a knowing and erudite voice. 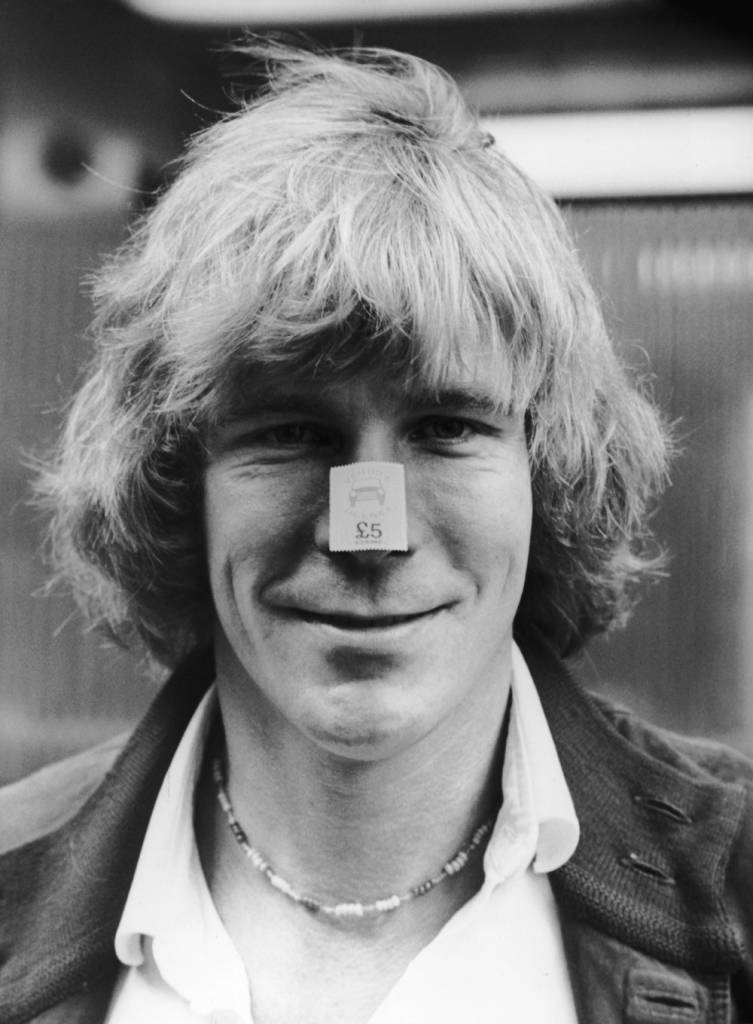 English racing driver James Hunt (1947 – 1993) wearing a vehicle licence stamp on his nose, 11th August 1980. The stamps are part of a Ministry of Transport scheme to help drivers save towards their licences. (Photo by Central Press/Hulton Archive/Getty Images) 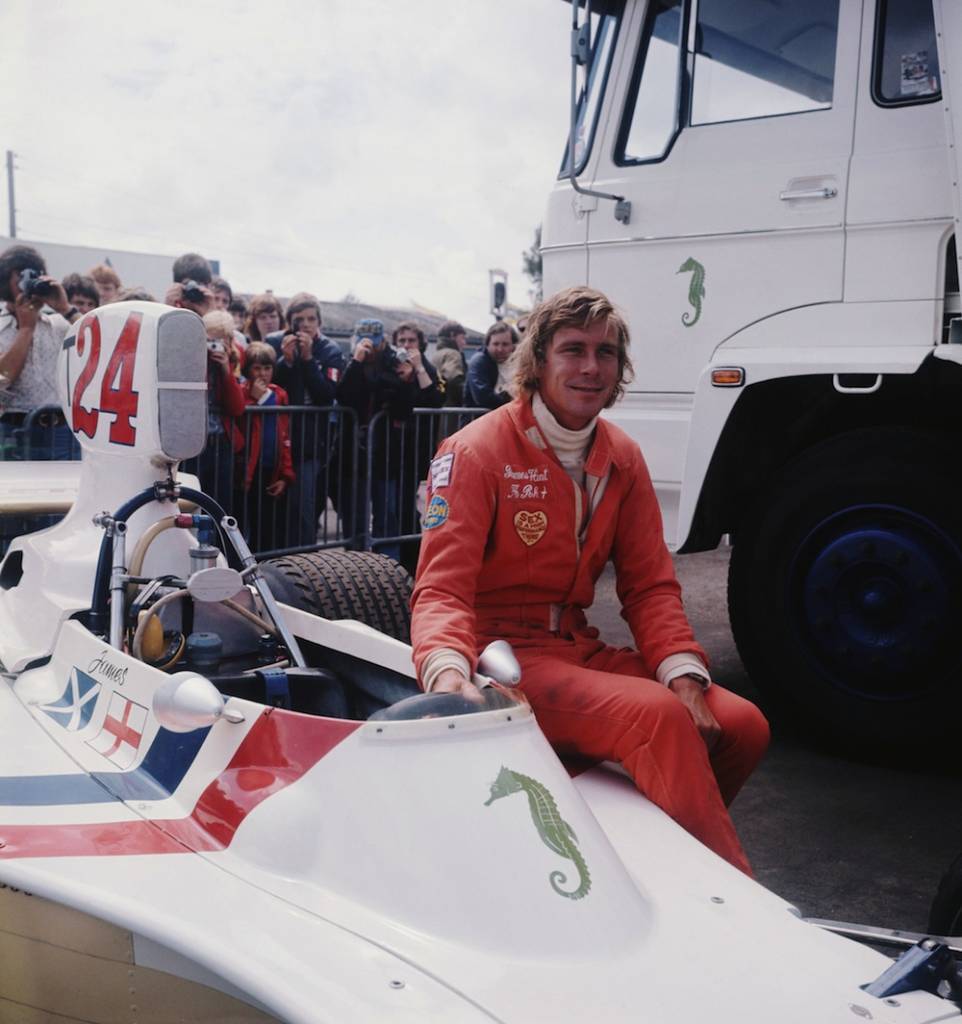 Marriage number two  was to Sarah Lomax, with whom he had two sons, and a number of budgerigars. The marriage ended in divorce.

Hunt then proposed to Helen Dyson on June 15, 1993, she accepted his marriage proposal. A few hours later he suffered a heart attack and died. He was 45 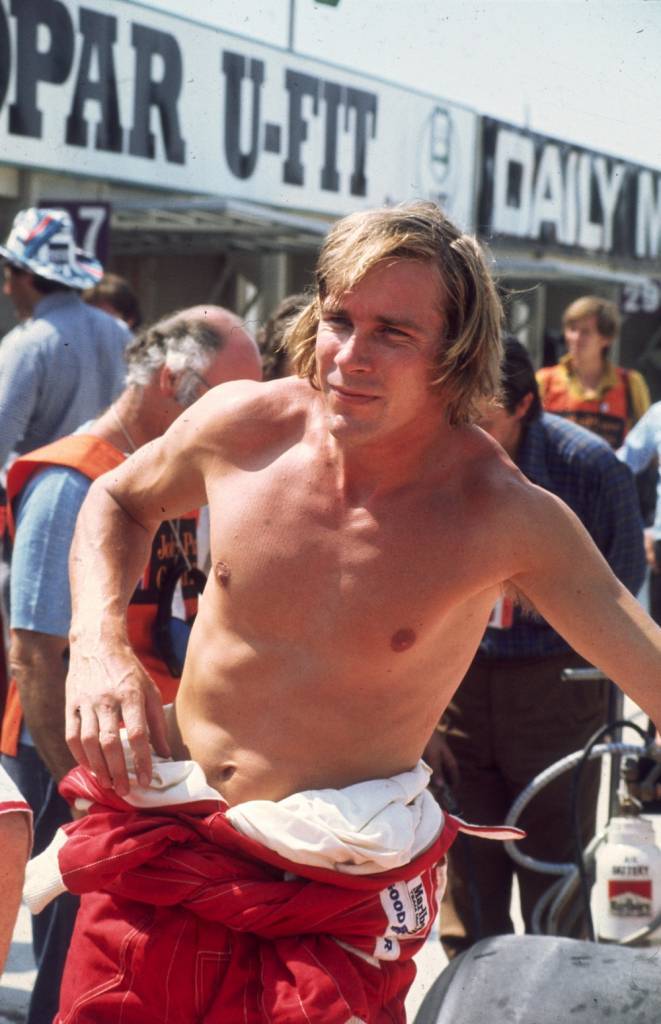 18th July 1976: Formula 1 racing driver James Hunt (1947 – 1993) with his overalls pushed down to his waist at the Brands Hatch British Grand Prix. (Photo by Keystone/Getty Images) 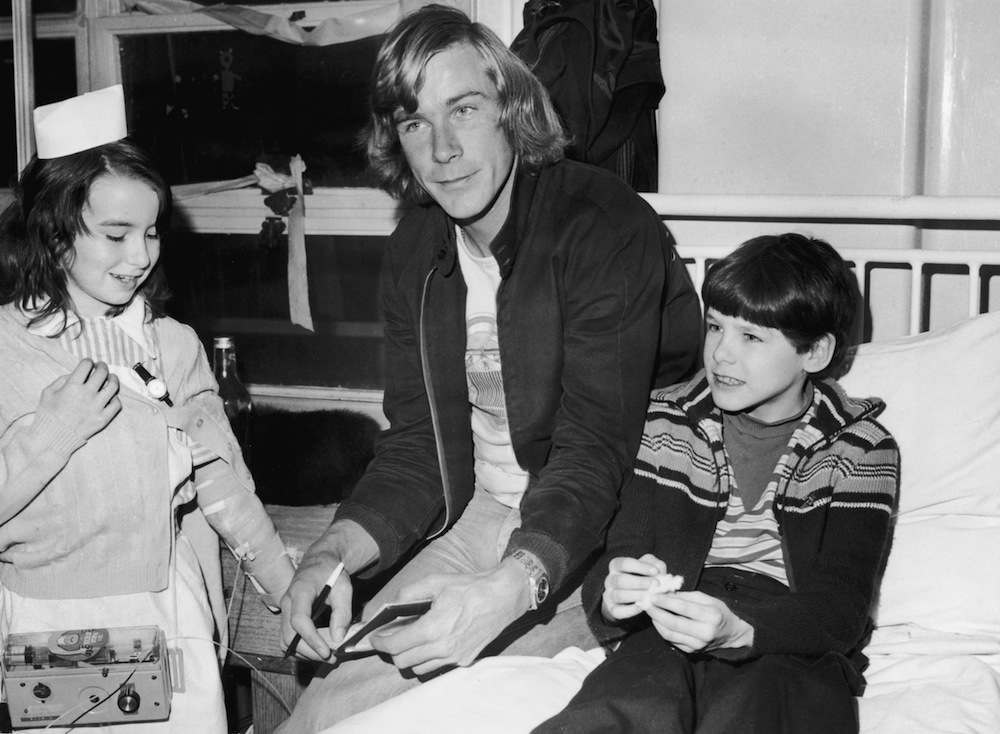 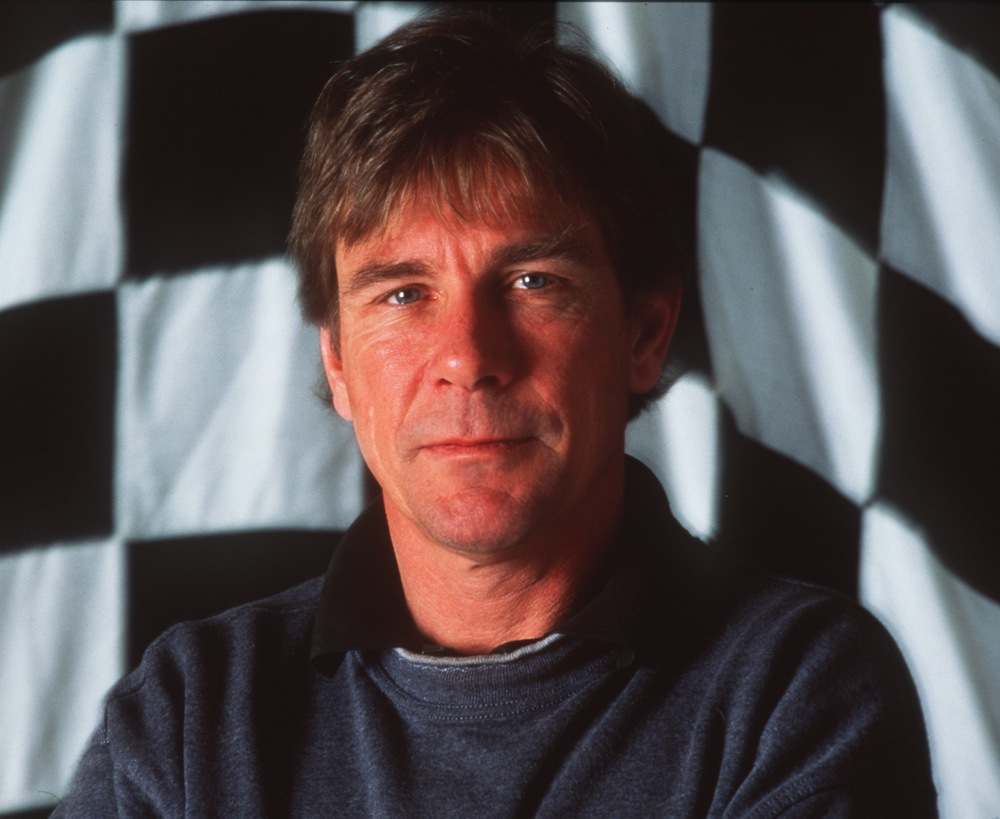